The battle that became a ‘dress rehearsal’ for Stalingrad (PHOTOS) 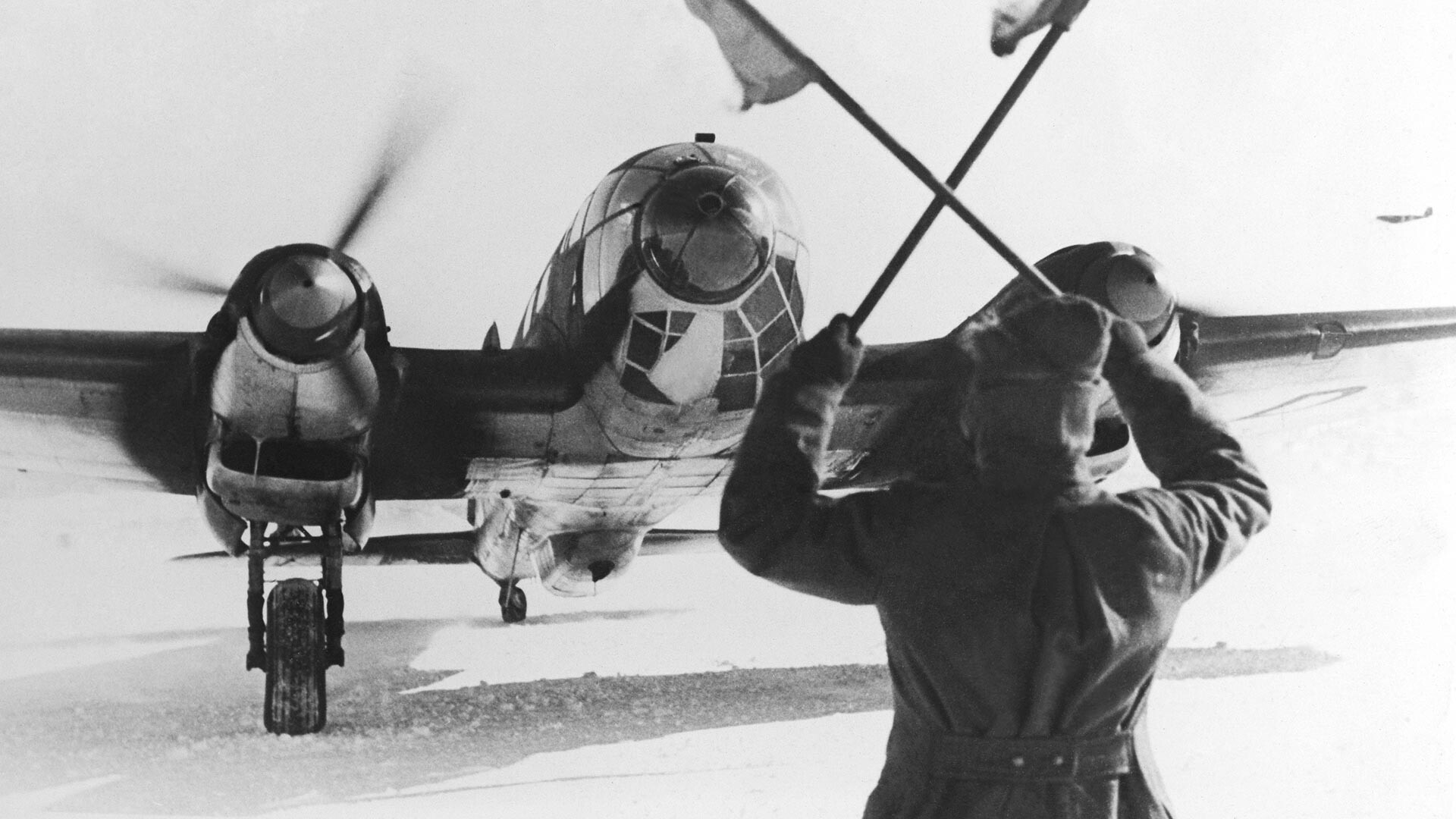 Keystone-France/Gamma-Keystone/Getty Images
In February 1942, in what was a first for them, Soviet forces surrounded a 95,000-strong German grouping in the northwest of the USSR. However, they then failed to press home their advantage or to finish off the enemy.

At the end of 1941, the Red Army inflicted a crushing defeat on the Germans near Moscow, pushing the Wehrmacht back several hundred kilometers from the capital. Inspired by this success, the Soviet military command decided that the time had come for a radical breakthrough in the war and initiated a large-scale offensive on all fronts. “The Germans want… to gain time and win a respite,” Stalin said at the time. “Our job is not to give the Germans this respite, to push them ceaselessly westwards, to force them to use up their reserves even before the spring… and thus to ensure the complete defeat of Hitler’s troops in 1942.” 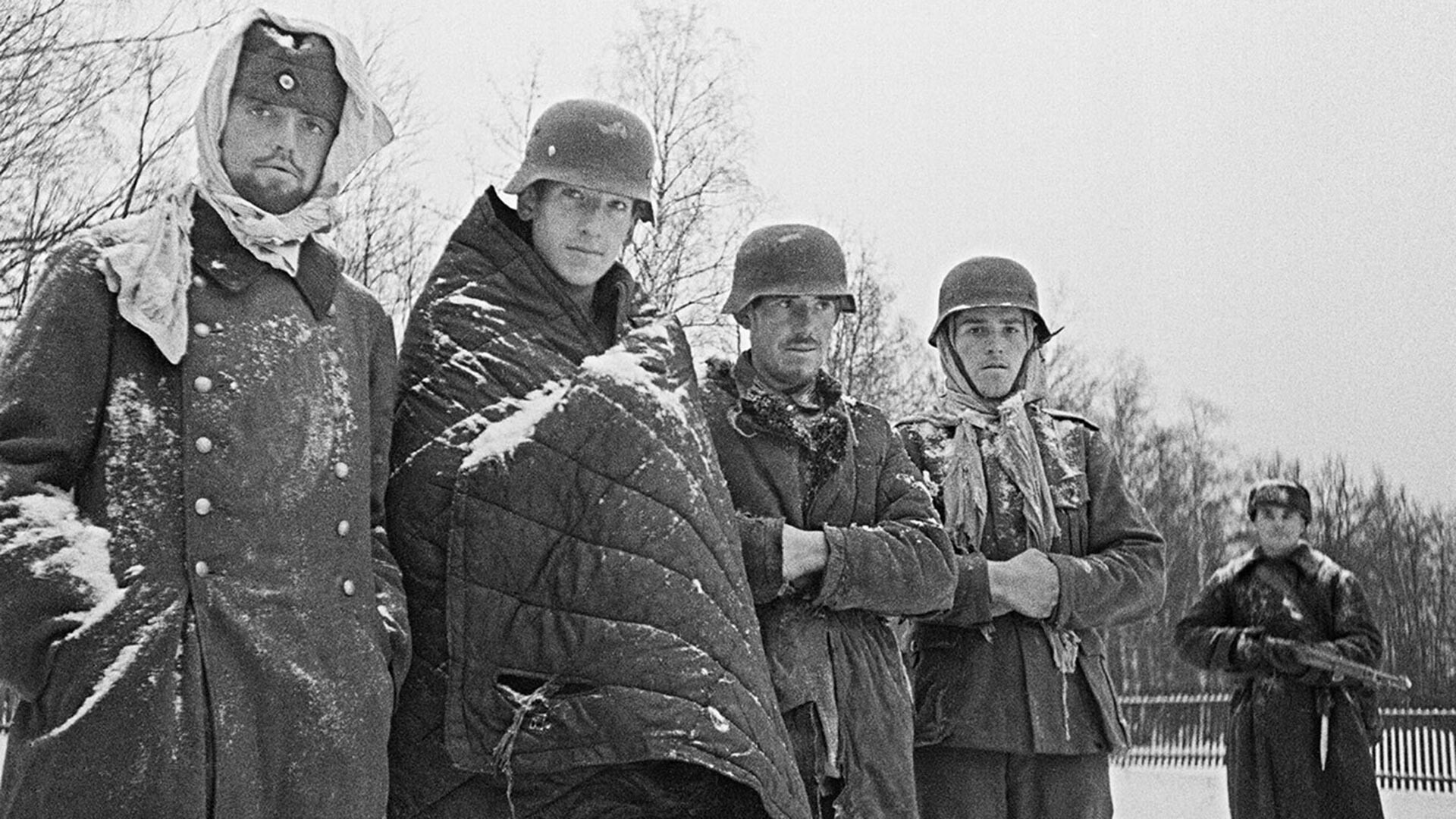 German prisoners of war outside Moscow in December 1941.

One of the main planned strikes was to be against Army Group North besieging Leningrad. On January 7, 1942, the forces of the Northwestern Front commanded by Lieutenant-General Pavel Kurochkin attacked enemy positions in the area of Lake Ilmen and Lake Seliger, advancing in the direction of Demyansk and Staraya Russa. “The northwest is difficult in its own way,” wrote Vladimir Flankin, commander of a guards mortar battery. “True, it almost never has fierce frosts or unbearable heat. Its climate is mild and humid. But it has forests and swamps everywhere. And it is humid all year round. Stray off the track and you will plunge into a swamp up to the waist. There is an absence of roads.” 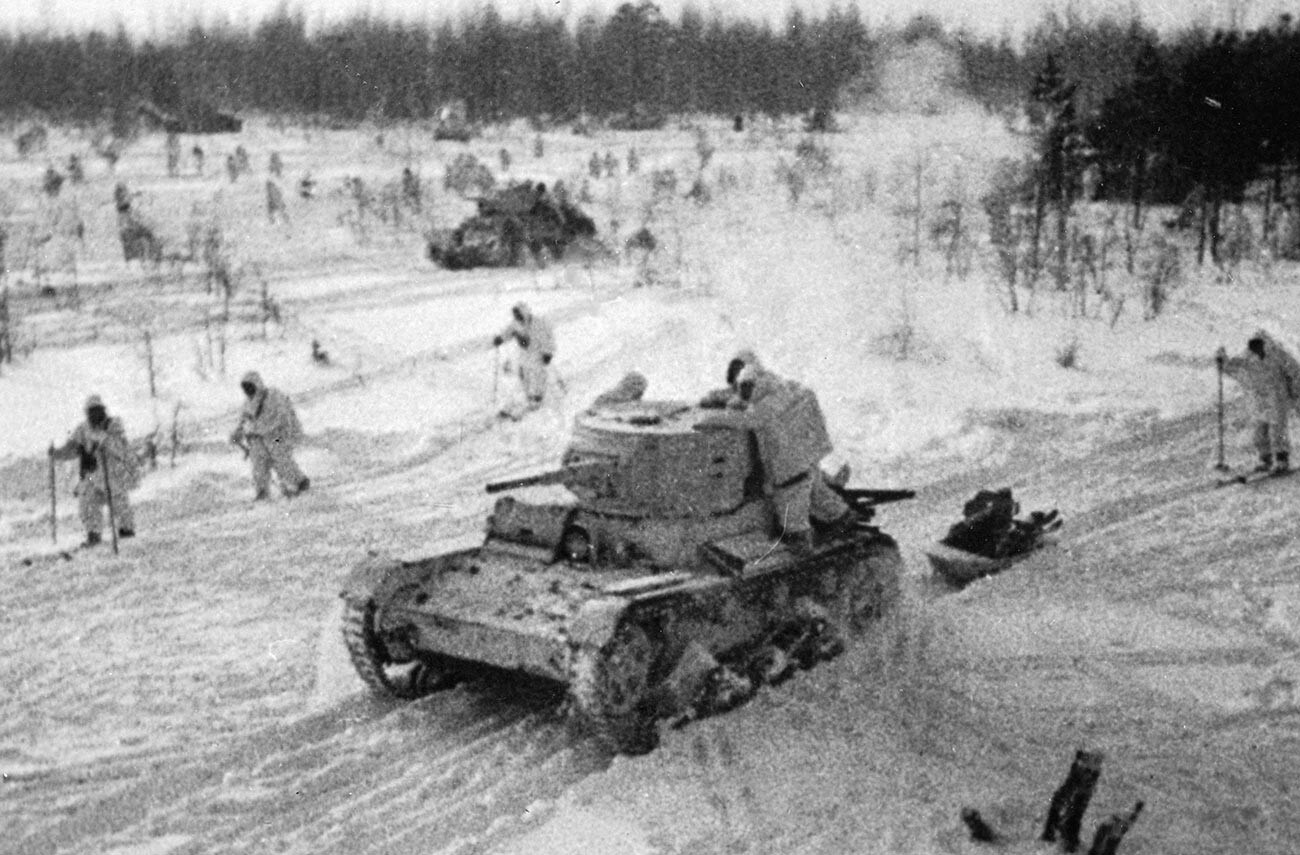 Despite the poorly-accessible terrain and fierce resistance on the part of the Germans, the Red Army successfully advanced in several directions, intending to catch the enemy in a pincer movement. Alarmed by the situation, the command of the Wehrmacht’s II Army Corps asked Berlin for permission to withdraw, but got a categorical reply: “Demyansk must be defended to the last man.” In the end, on February 20, the Soviet units heading in each other’s direction completed the encirclement at the village of Zaluchye, cutting off significant forces of the II Army Corps and the SS ‘Totenkopf’ panzer division - 95,000 men in all. 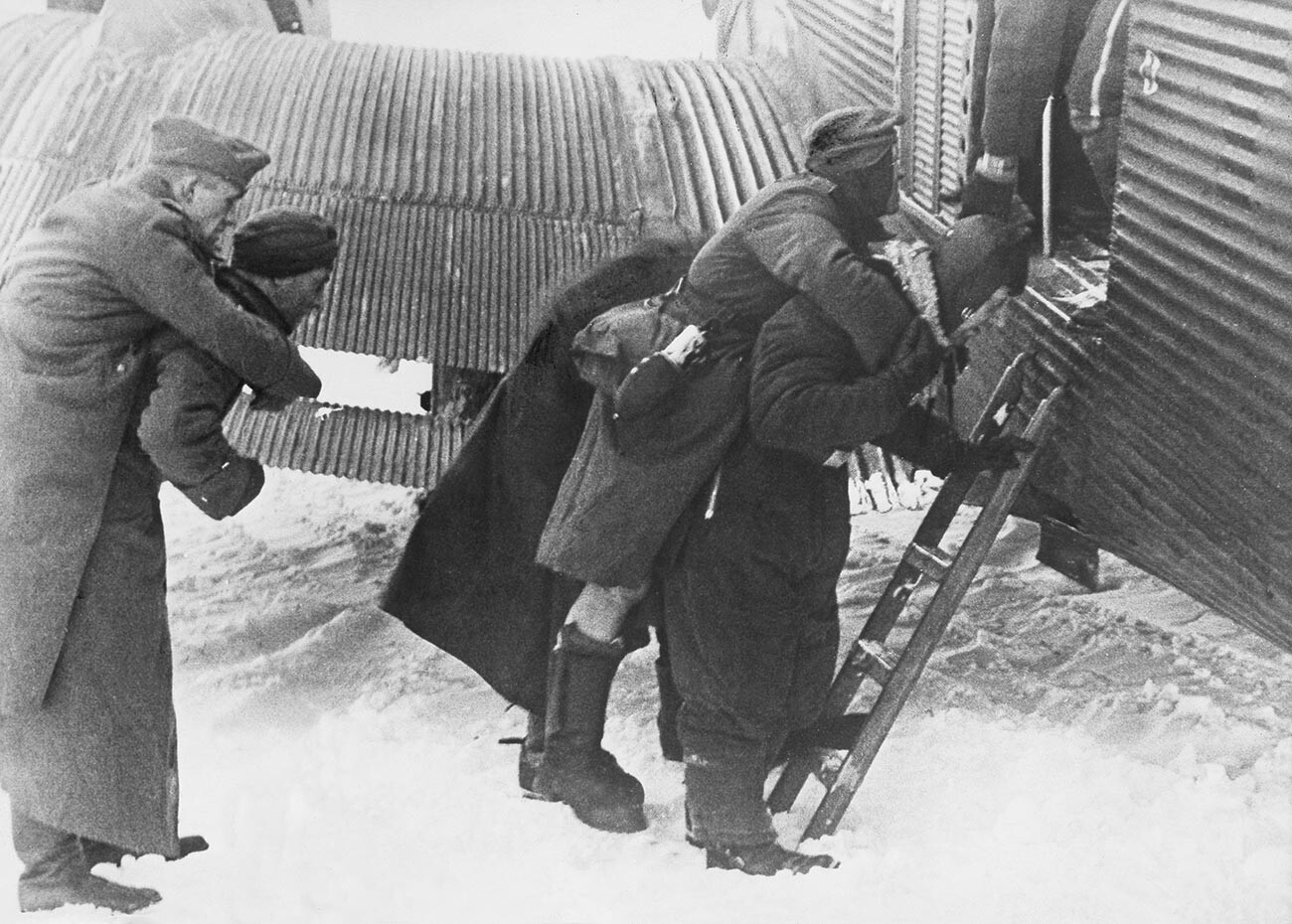 An area of 3,000 sq. km. ended up under the control of the encircled grouping, including the large settlement of Demyansk and a number of small centers of population. The Third Reich leadership banned the use of the word ‘pocket’ to describe it, preferring expressions such as ‘Fortress Demyansk’ or ‘Stronghold in the East’. Soldiers of the II Army Corps, in turn, simply called it ‘The County’, since their commander, Walter von Brockdorff-Ahlefeldt, was a genuine count. 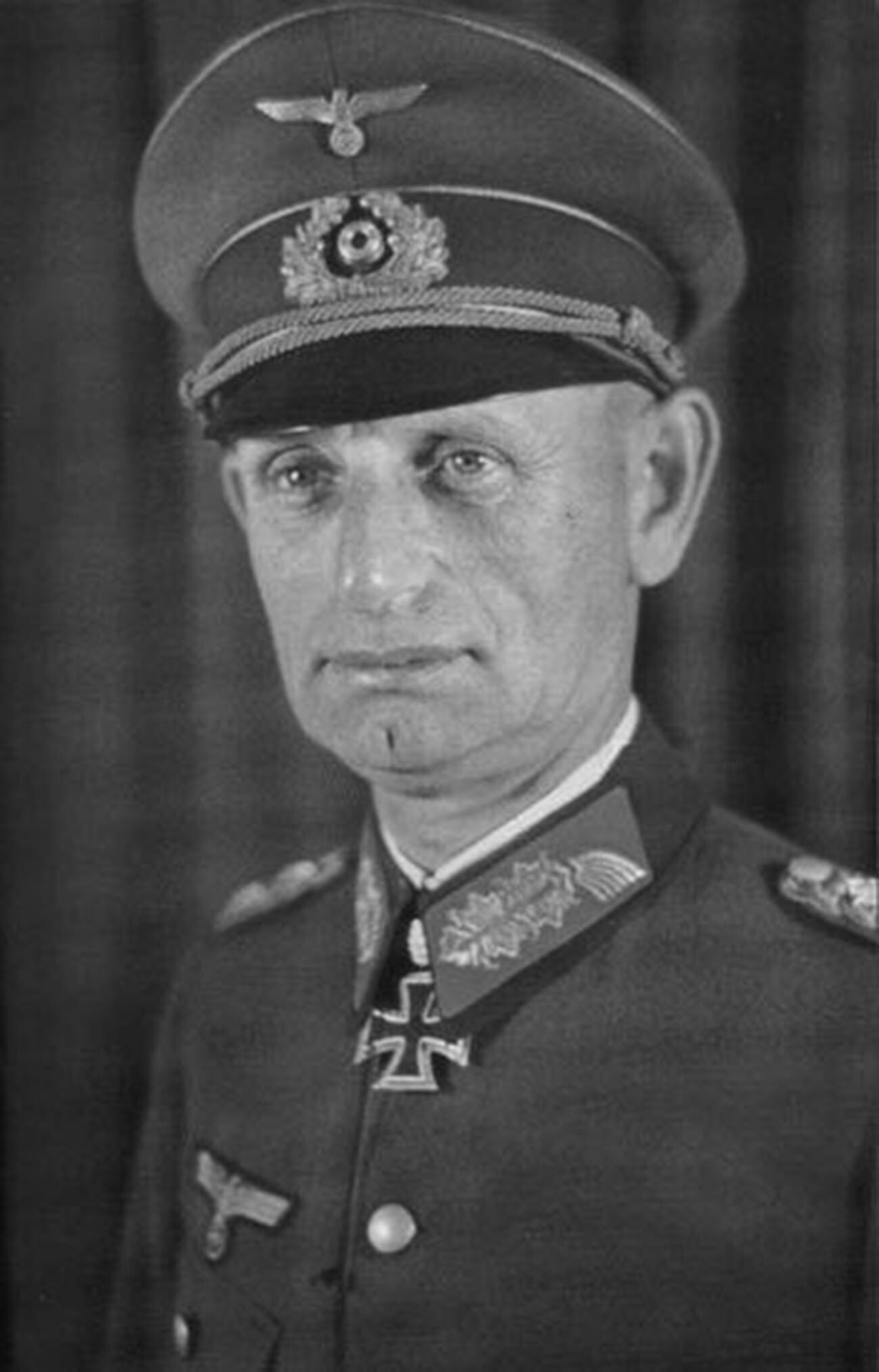 The Soviet command was perfectly aware of the need to smash the ensnared enemy as quickly as possible, but all of the Red Army’s attempts to break through the II Army Corps’s defenses ended in practically total failure. “The enemy cut all the roads and all the access routes and approaches that could have been at all usable for our advance,” Kurochkin recalled. “And since the cross-country movement of significant bodies of troops was completely out of the question, it was exceedingly difficult to overcome this kind of defense… The hushed snow-covered fields outside these villages could in a single instant become a scene of pandemonium as soon as we began to advance. Every meter of ground was raked by numerous machine guns and artillery from concealed positions in the villages.” 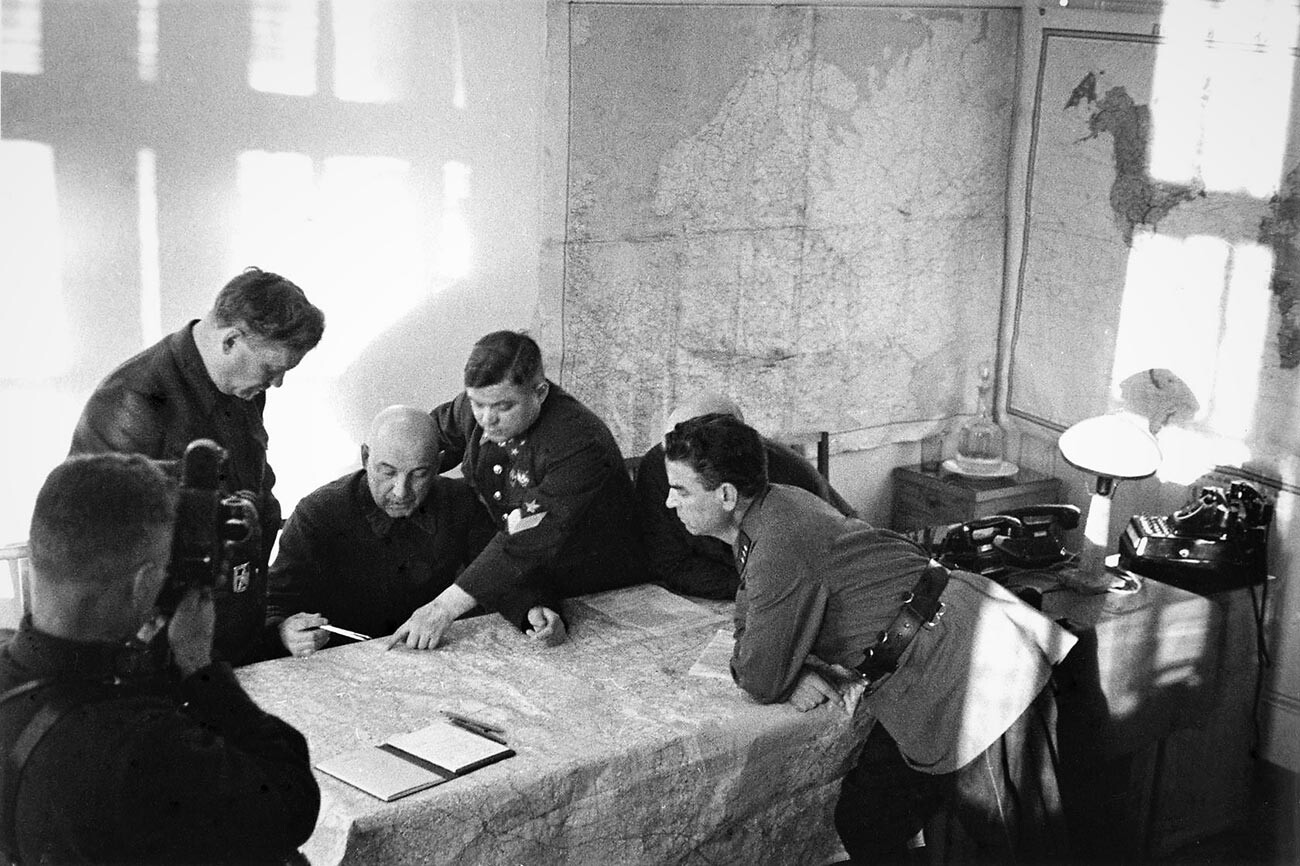 Pavel Kurochkin (sits) and the military council of the Northwestern Front.

The defense of the “pocket” also entailed a considerable strain on all the German grouping’s forces. “Strongpoints have been set up and manned. Everyone has been deployed down to the last soldier, including the cooks…” wrote Senior Lieutenant Martin Steglich in his diary. The commander of a signals platoon in the 37th Guards Artillery Regiment, Ivan Novokhatsky, paints a gruesome picture in his memoirs: “The Germans made parapets for their forward line from the corpses of our soldiers, piling them up and dousing them with water, since as a rule it was impossible to dig down because of the groundwater, which was 20-30 cm from the surface in many places.” 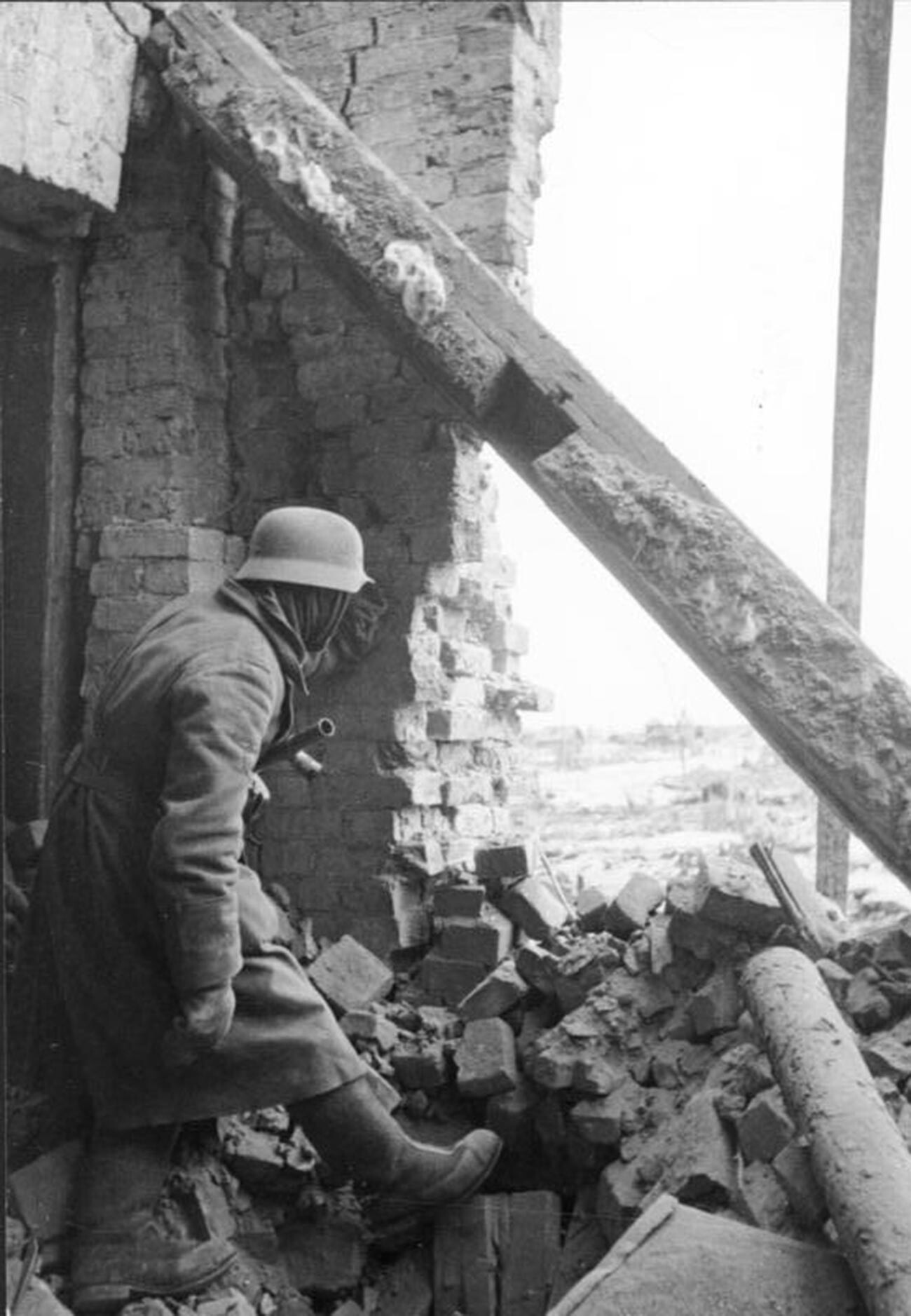 In the absence of regular supplies of provisions, arms and ammunition, Brockdorff-Ahlefeldt’s troops could not have held out for any significant length of time and Hermann Goering sent all available transport aviation forces to the aid of the ‘Demyansk Fortress’. Air formations were taken from Army Group Center and even from the Afrika Korps. Since the Luftwaffe retained its supremacy in the air, the Red Army air forces could not significantly hamper the operation of the “air bridge”. For all that, the Germans lost over a hundred Junkers Ju-52 and Heinkel He-111 transport aircraft in the operation to resupply Demyansk. 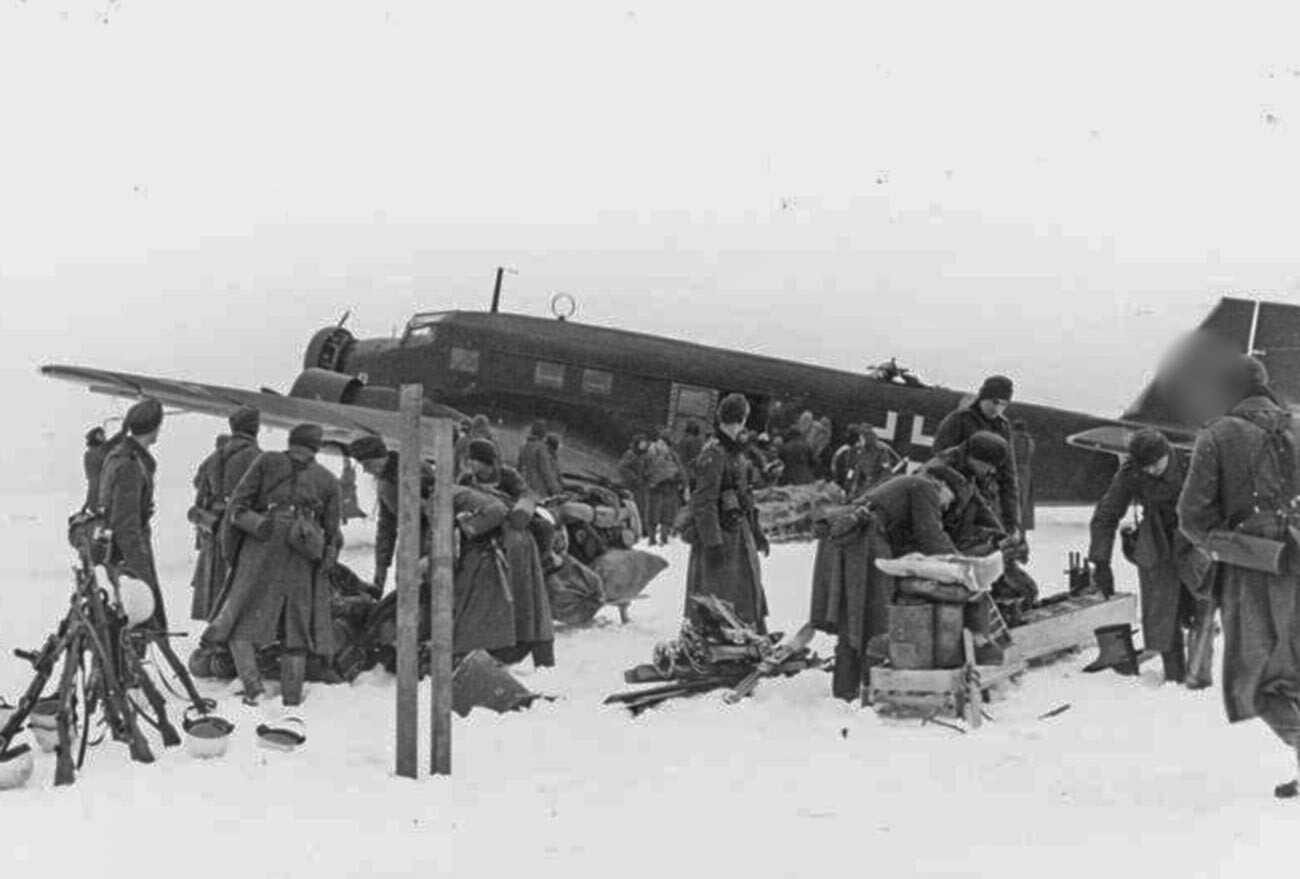 With the arrival of spring, the German troops began attempts to break the encirclement, something they finally succeeded in doing. On April 22, 1942, near the village of Ramushevo, Lieutenant-General Walther Kurt von Seydlitz-Kurzbach’s army group came into contact with the soldiers of Major-General Hans Zorn, who were breaking out of the “pocket”. This led to the creation of the up to one-kilometer wide so-called ‘Ramushevo corridor’. The Germans managed to widen it to eight kilometers, however, and to reinforce it with minefields and dozens of pillboxes and earth-and-timber emplacements. Numerous attempts by Soviet troops to destroy this supply line and restore the “pocket” proved fruitless. 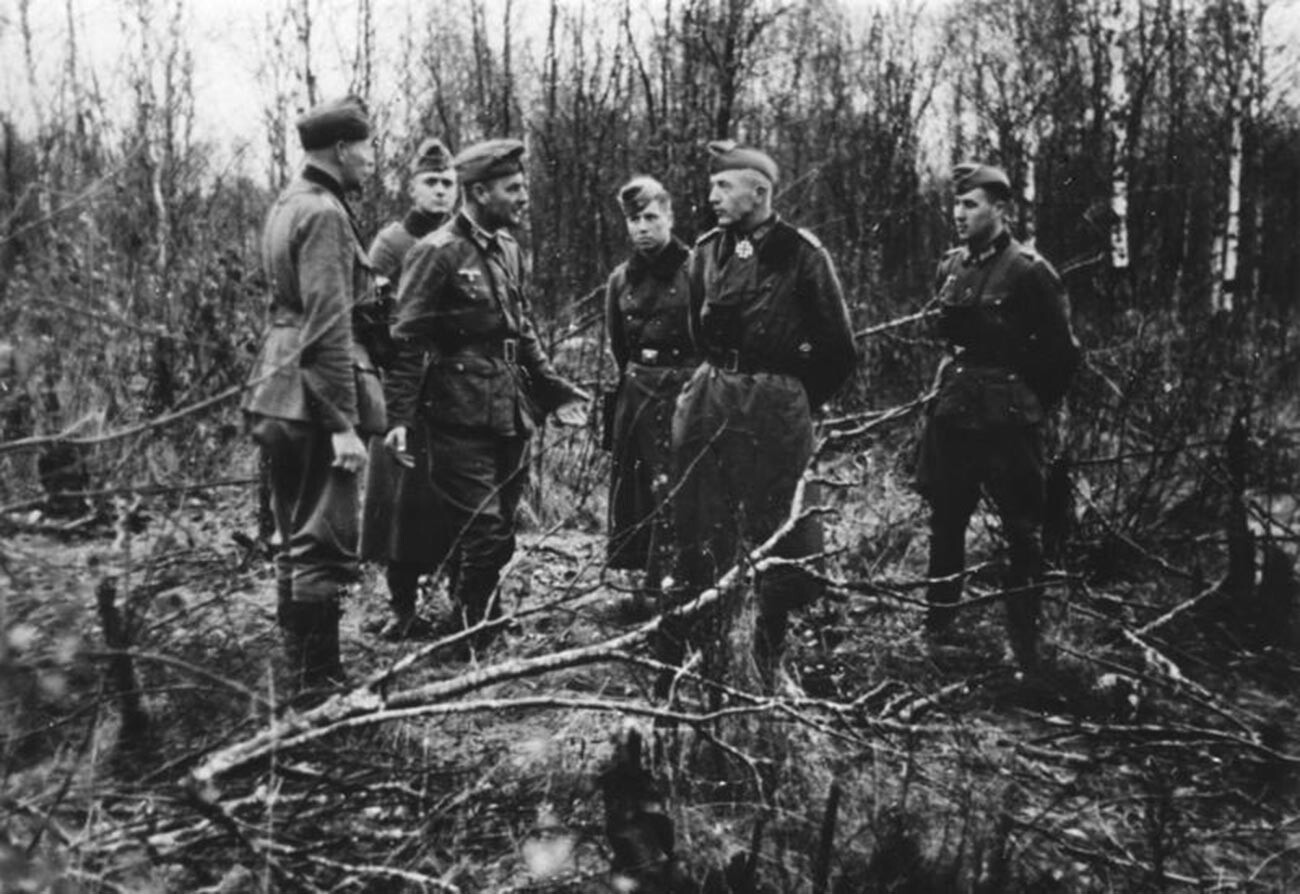 The successful defense of the Demyansk “pocket” played a cruel joke on Hitler. When, in November 1942, Friedrich Paulus’s 300,000-strong army fell into a trap at Stalingrad, the Fuehrer prohibited it from withdrawing from the city, as he was convinced that, on this occasion, too, the Luftwaffe would bail out the encircled troops. The leader of the Third Reich failed, however, to take account of the increased activity and effectiveness of the Red Army air forces and the fundamentally different terrain compared with Demyansk: It was one thing to fly several dozen kilometers over remote woodland and a completely different matter to have to cover 200 kilometers or so over open steppe while having to overcome fierce opposition from Soviet air defenses. For this mistake, the Nazis were soon to pay a heavy price. 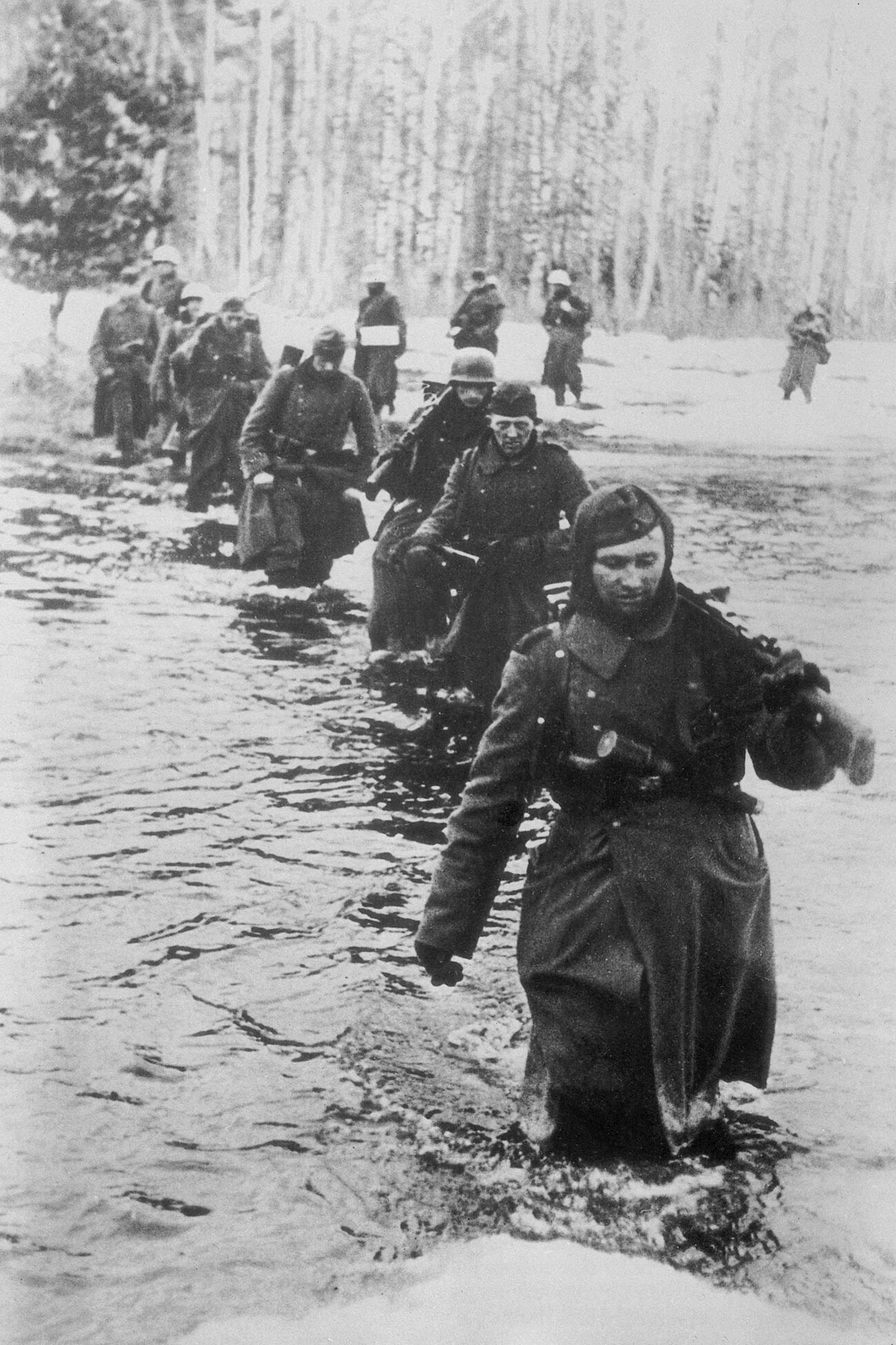