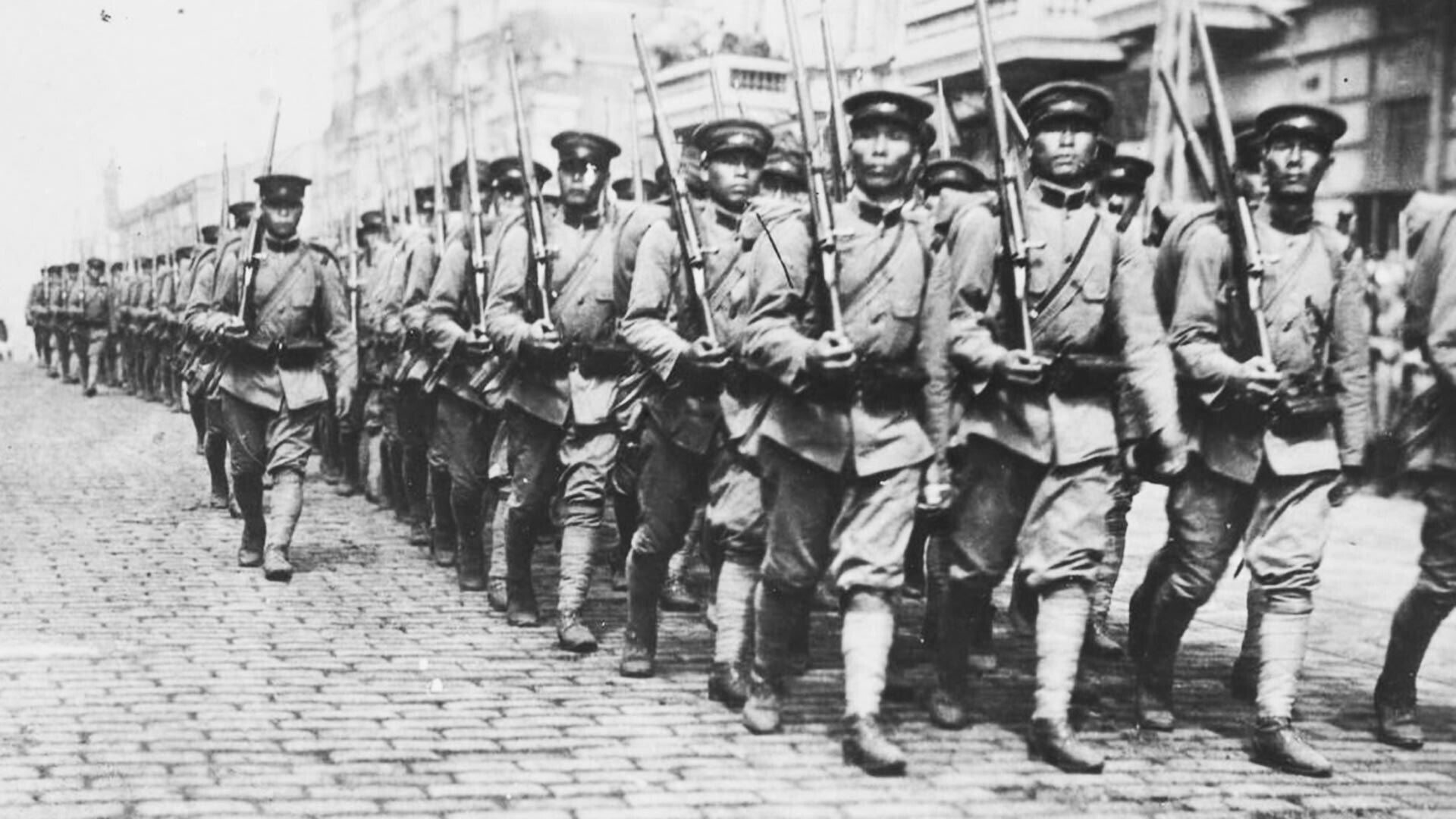 Archive photo
The Russian Civil War opened a window of opportunity for Japan. Its ambitions extended not only to the Russian coast of the Pacific Ocean, but to the whole of vast Siberia, too.

The large-scale intervention of the Entente powers in Russia was by no means driven by an ideological hatred of the Bolsheviks, who had come to power in the country. Rather, London and Paris were worried about the Lenin government’s intention to withdraw from the war against Germany, which would have allowed the latter to direct all its might against France. It is, therefore, not surprising that in the civil war flaring up on the ruins of the Russian Empire, they backed the counter-revolutionary White movement, whose leaders had sworn to return the Russian army to the battlefield and to fight against Germany to the bitter end. 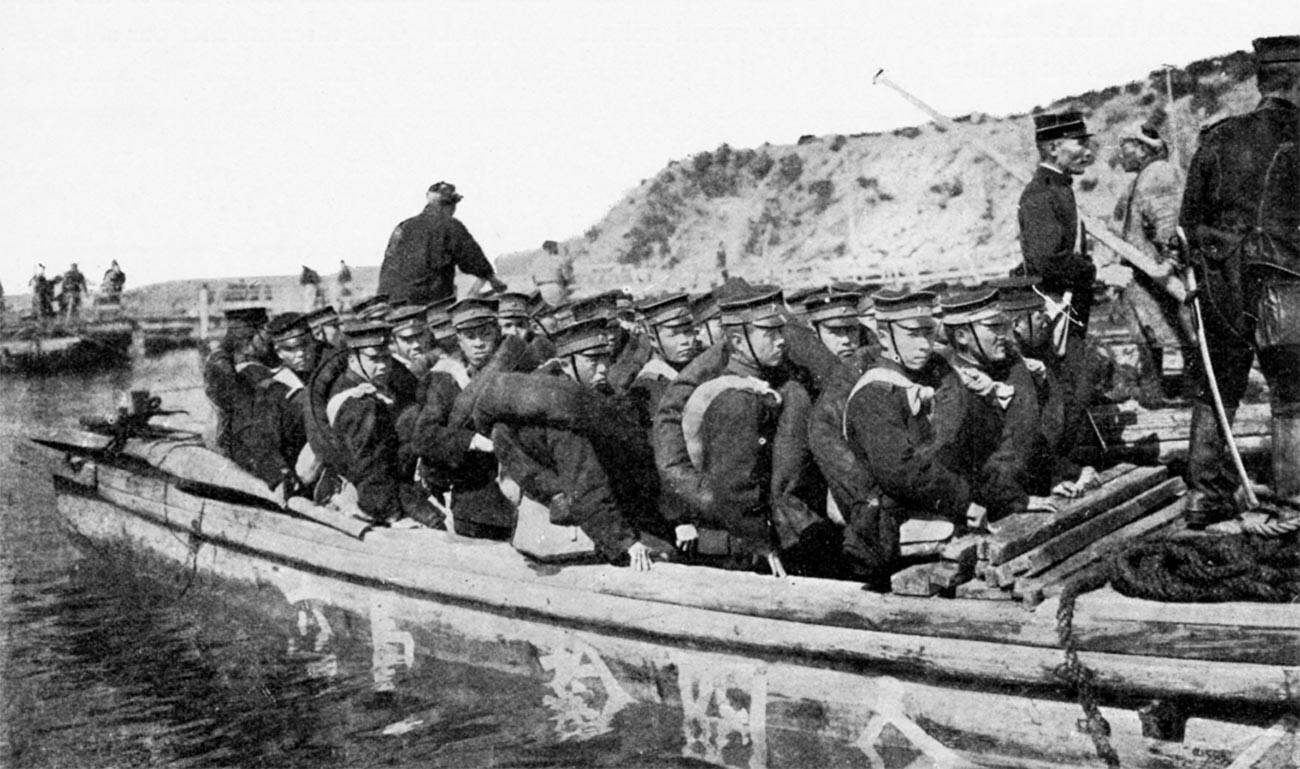 Soldiers of the Imperial Japanese Army.

Soon after Soviet Russia and Germany signed the Treaty of Brest-Litovsk on March 3, 1918, Allied military contingents began to land in Russian ports in the north, south and east of the country. However, they were in no hurry to plunge headlong into the maelstrom of another country’s internal conflict and tried to stay away from military clashes in the hope of achieving their goal with little bloodshed and through the actions of others. In those circumstances, Japan clearly stood out, since the difficult situation in Russia opened a great window of opportunity for it. 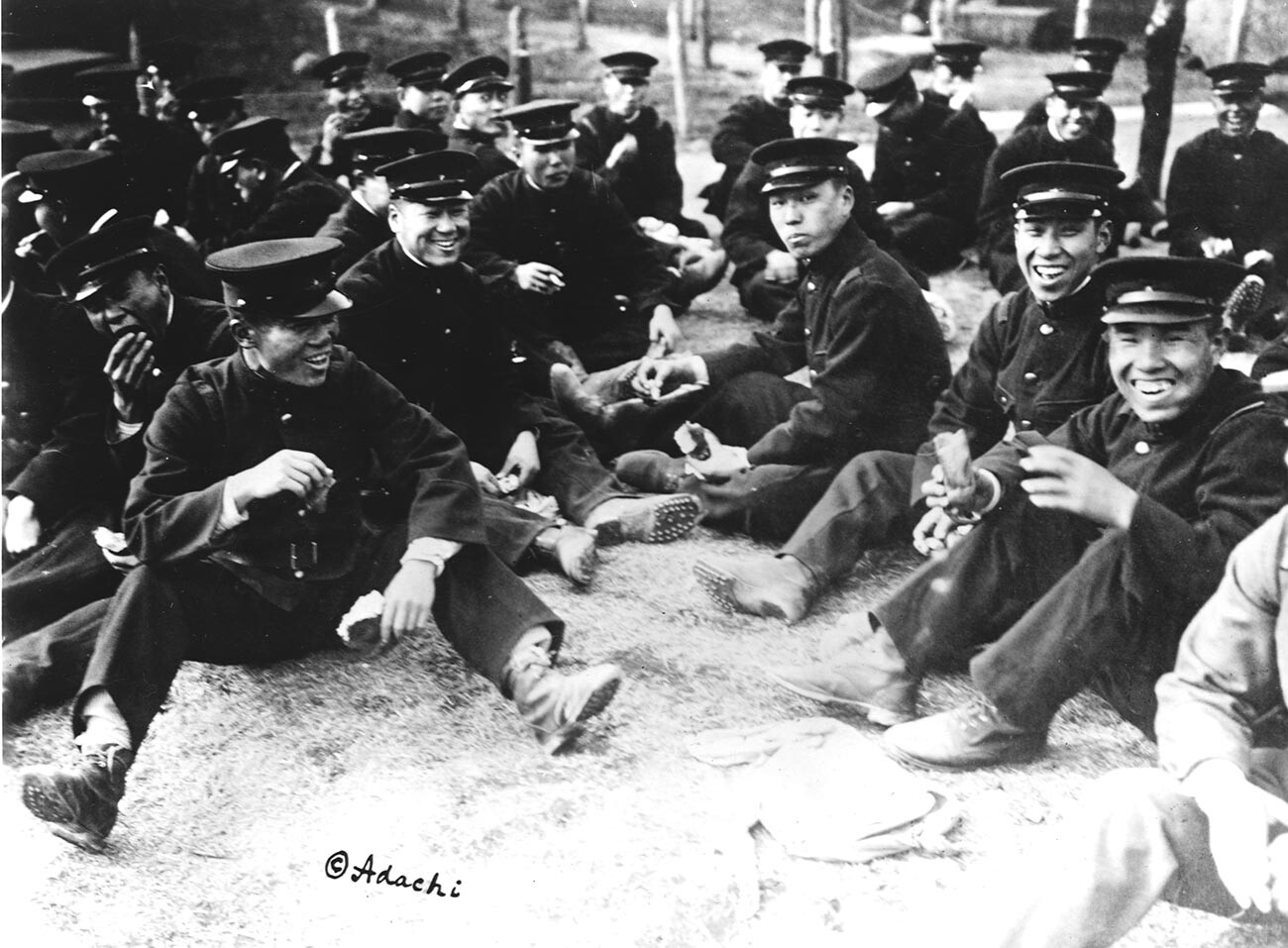 Adachi/Library of Congress/Corbis/VCG via Getty Images

Japan was pushed to participate in the intervention in the Russian Far East by Washington and, initially, Japanese society was divided as to whether to get involved in the conflict. However, over time, the scale of Japan’s intervention in Russian affairs began to grow exponentially, so much so that the United States began to worry about how to curb its ally’s growing appetites. “Given its location and interests in East Asia, Japan should play the main part in restoring order in Eastern Siberia,” Japanese Foreign Minister Goto Shinpei told the Americans in July 1918. 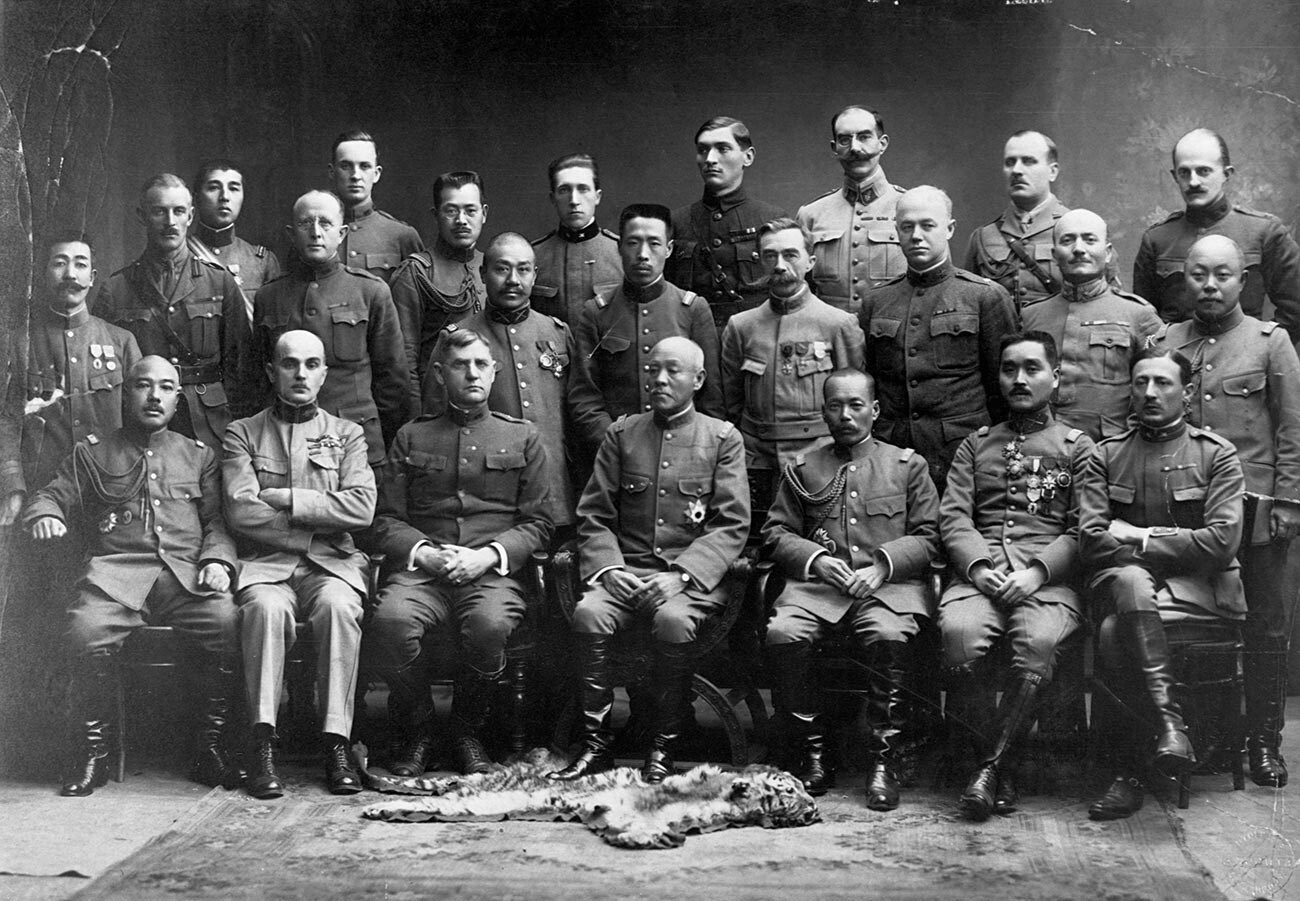 American and Japanese officers in Russia, 1918.

The first Japanese soldiers landed in the port of Vladivostok on April 5, 1918. They were two marine companies from Vice Admiral Hiroharu Kato’s squadron. The operation was prompted by the murder of two Japanese subjects committed in the city the day before. Encountering no resistance, the Japanese quickly took control of the port and center of Vladivostok. “The long-prepared imperialist strike from the East has taken place,” the Soviet government reacted on the same day. “Japanese imperialists want to strangle the Soviet revolution, to cut off Russia from the Pacific Ocean, to seize the rich expanses of Siberia, to enslave Siberian workers and peasants.” 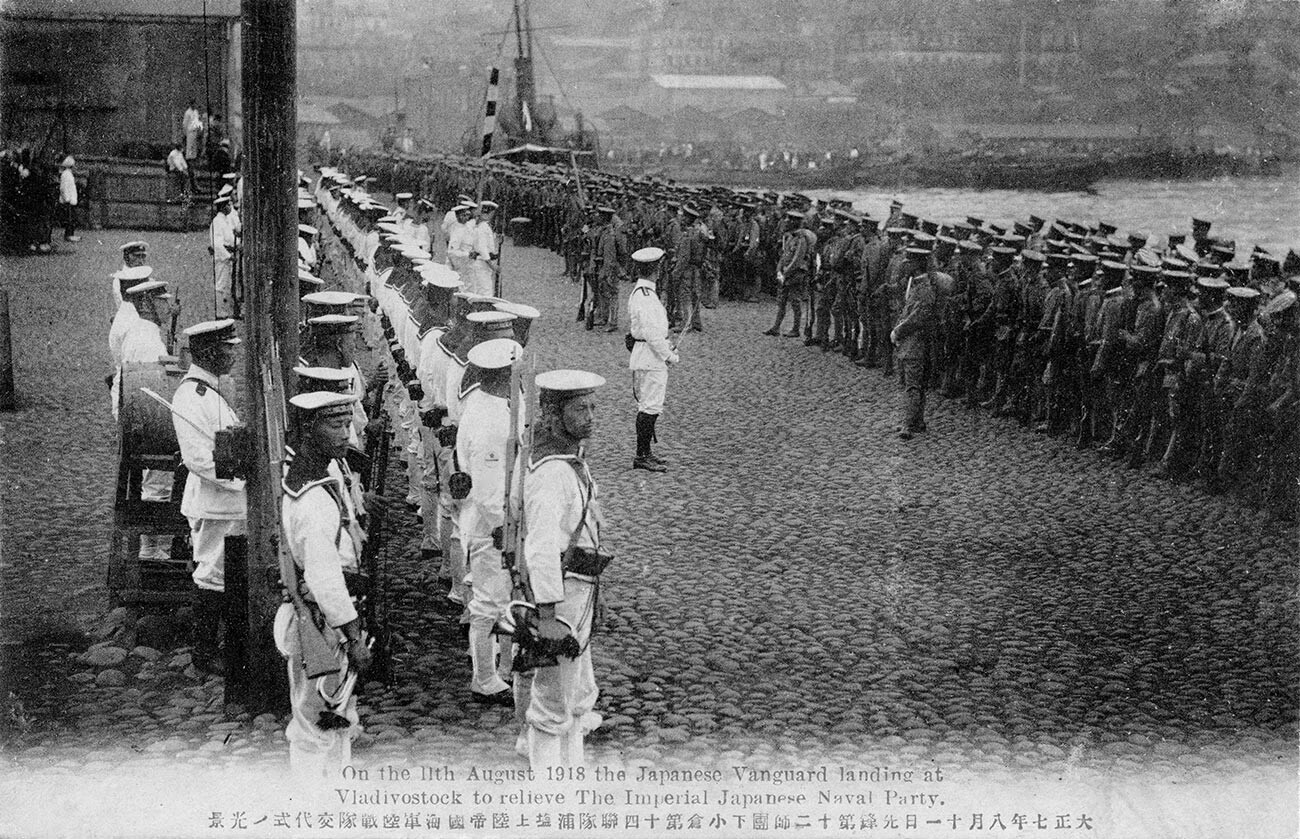 “The World War gave Japan an unexpected gift: an untouched treasure trove - Siberia. The Japanese… should master the treasure trove that is Siberia… Making it part of Japan — not in the sense of invasion but in the economic sense — depends on the skill of the Japanese,” wrote I. Rokuro, editor of People’s Newspaper. Tokyo was debating how to expand to the Russian Far East. One of the most acceptable options being considered was to oust the “extremists”, as the Bolsheviks were called, from the region, support local “moderate” political forces and facilitate the emergence of a Russian buffer state under the tutelage of Japan - an “independent Siberia”, as diplomat Ichiro Motono put it. It was pointed out that it was necessary to act carefully, without open aggression, keeping an eye on the reaction of the Western powers and preventing the rise of a popular liberation movement. 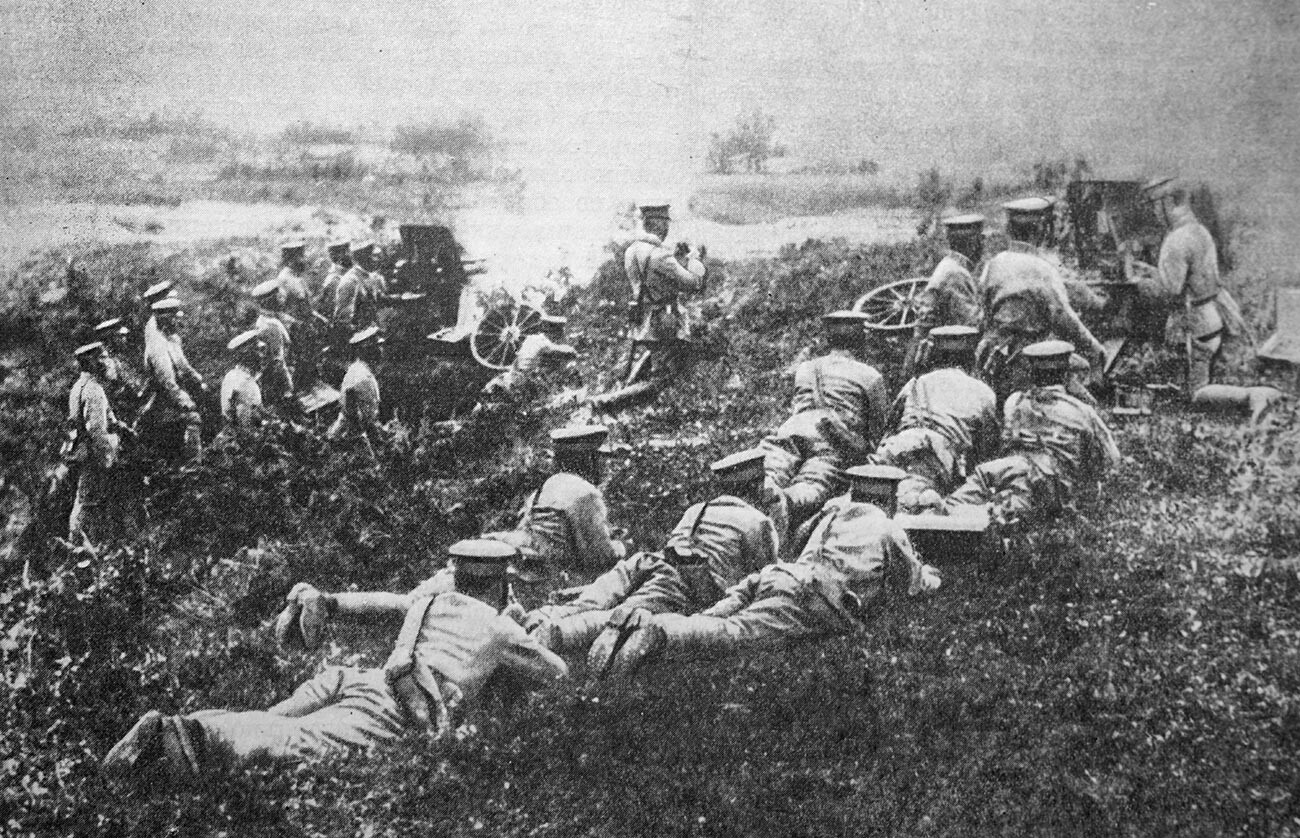 By October 1918, Japanese troops in the Russian Far East numbered over 72,000 soldiers (by way of comparison, the USA’s Siberia Expeditionary Force numbered just 9,000 soldiers). Part of the Trans-Siberian Railway, large chunks of Primorye and the Amur region fell under their control. There were Japanese garrisons even east of Lake Baikal. The region’s rich natural resources, including timber, coal and huge catches of salmon and herring, began to be exported to Japan on a massive scale. 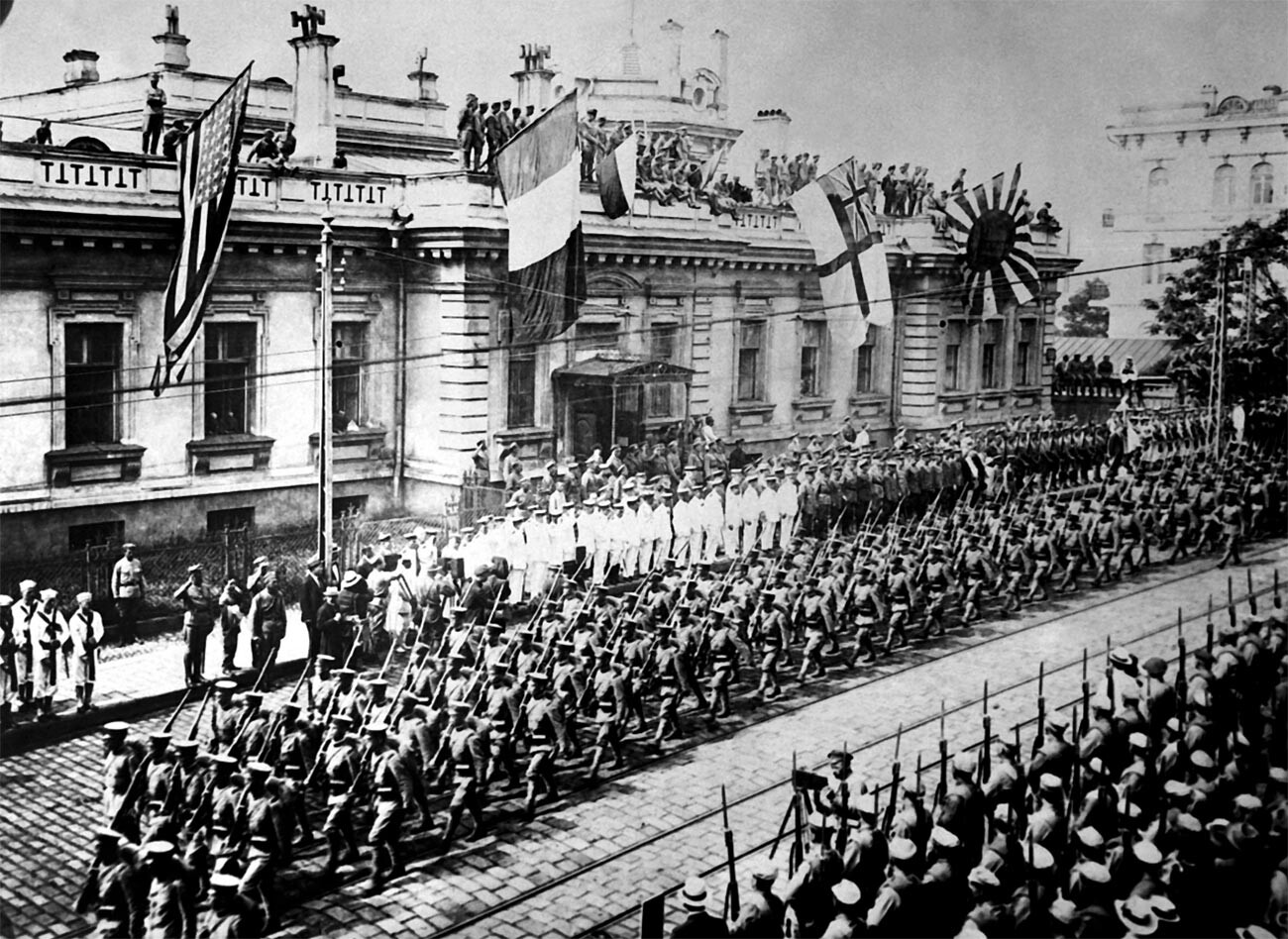 The Japanese leadership preferred to bank on such unruly Cossack atamans as Grigory Semyonov and Ivan Kalmykov. These figures in the White movement received funding, weapons, and, if necessary, direct support of the Japanese troops. At the same time, Japan’s relations with the recognized leader of the Whites, the “Supreme Ruler of Russia”, Admiral Alexander Kolchak, were strained. The thinking in Tokyo was that he was a “Washington man” and could damage the interests of the Land of the Rising Sun. “Japan is not interested in the speedy restoration of a united and strong Russia. Similar to its activities in China, here, too, it will strive to prolong the Civil War till the complete exhaustion of Russia in order to create more favorable conditions for its exploitation of an exhausted country,” the head of Kolchak’s government, Pyotr Vologodsky, wrote in February 1919. 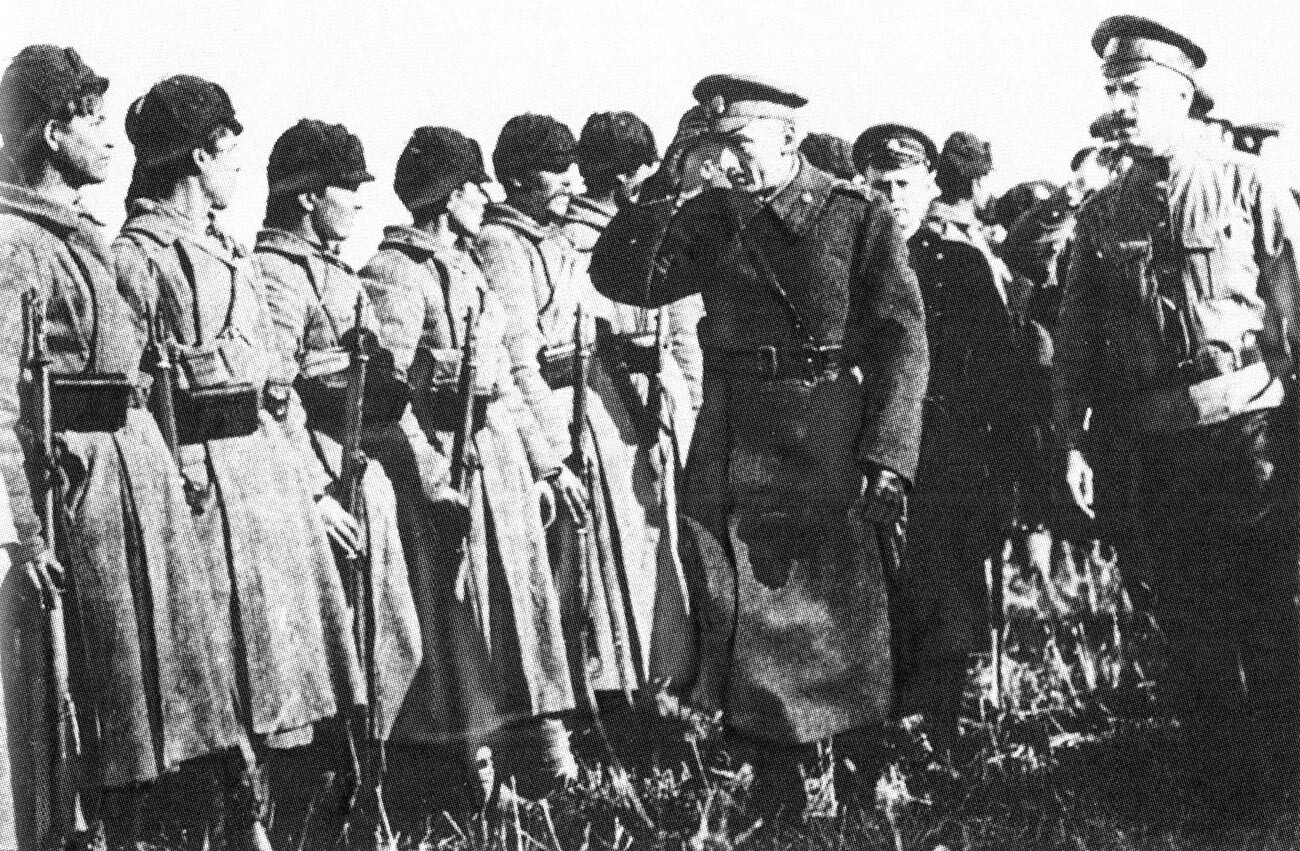 Unlike the other interventionists, the Japanese took an active part in clashes with local Red partisans. The latter had a tacit non-aggression pact with the Americans, but with the Japanese they fought fierce and bloody battles, each claiming tens if not hundreds of lives on both sides. According to various estimates, during the years of intervention, the Imperial Army lost up to 3,000 soldiers and officers. 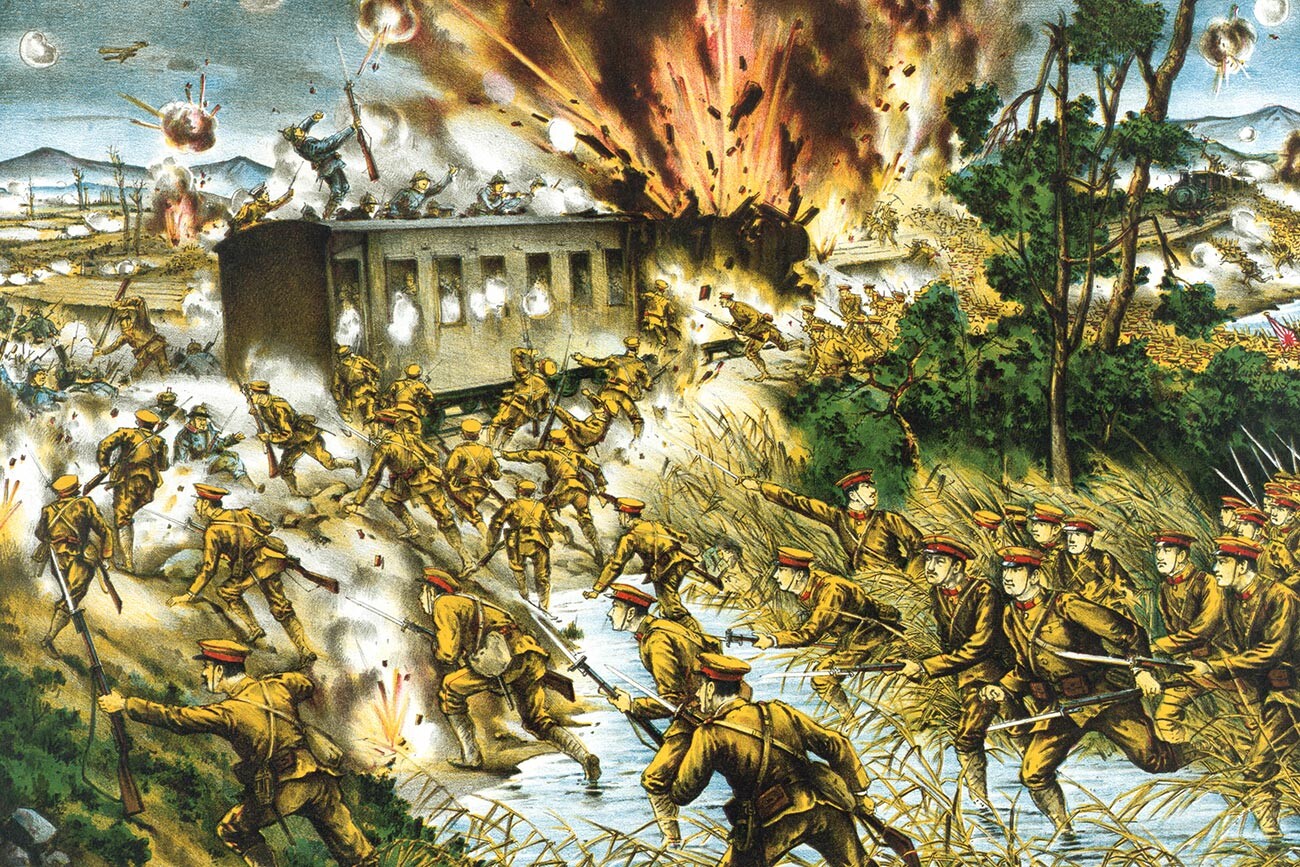 Japanese Attack Russian Communist forces at a train along the Amur River.

Any disobedience on the part of the local population was brutally suppressed and punished: entire villages were burned down and demonstrative executions were staged. One American officer witnessed a Japanese punitive action at the Sviyagino railway station in July 1919: “Five Russians were led to graves that had been dug in the vicinity of the railway station, they were blindfolded and ordered to kneel at the edge of the graves with their hands tied behind their backs. Two Japanese officers, having taken off their coats and drawn their sabers, began to cut the victims, hitting them behind their necks, and when each of the victims fell into the grave, three to five Japanese soldiers finished them off with bayonets, shrieking with joy. Two were immediately decapitated by saber blows, but the others were apparently still alive, as the earth thrown over them was moving.” 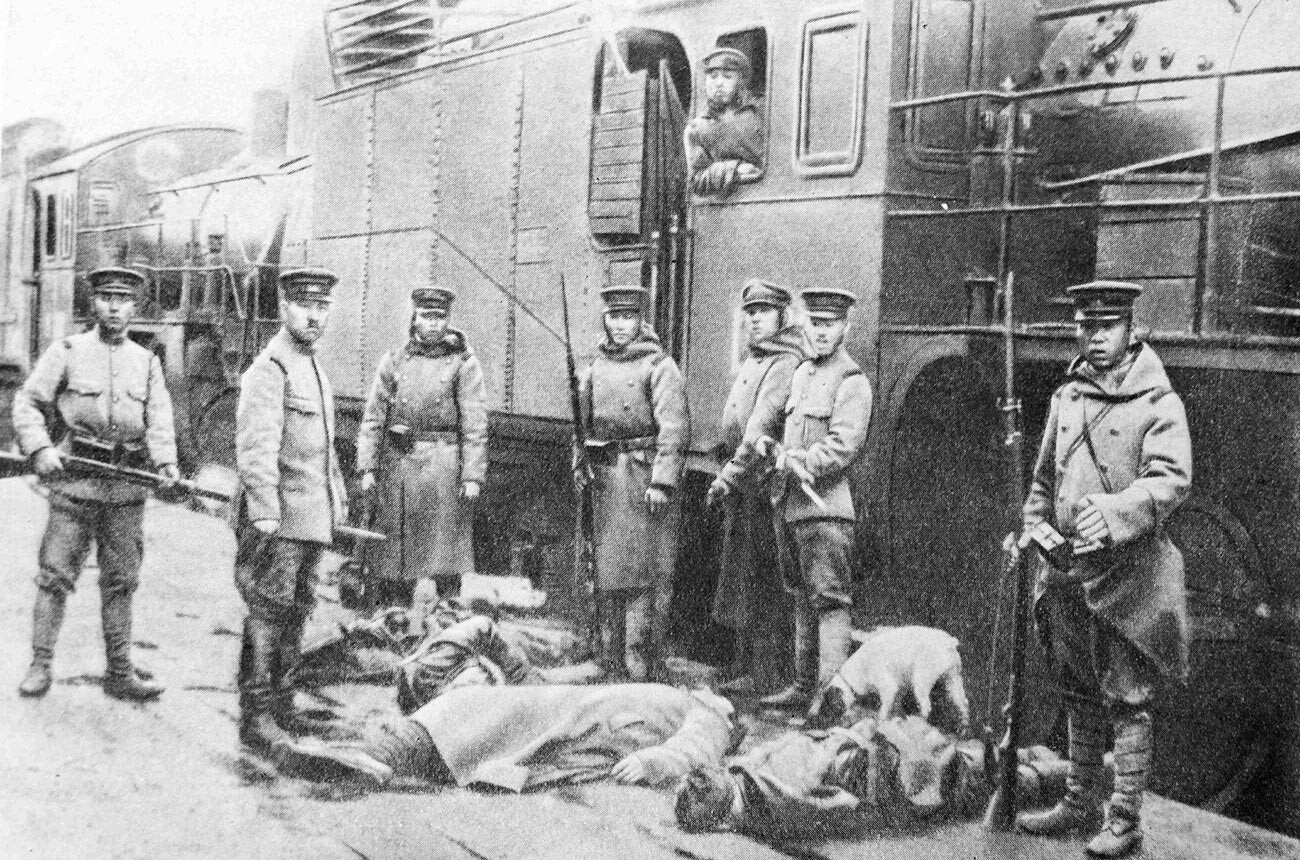 At the same time, the Japanese saved more than 900 orphans from the families of Poles who had been exiled to Siberia back in tsarist times. The children, whose parents had perished in the crucible of the Civil War, were taken to Japan and then transported to their historical homeland. In addition, the Japanese assisted the American Red Cross in evacuating from the war zone almost 800 Russian children who had been brought to the east of the country from Petrograd (now St. Petersburg) in 1918. They were recovering there after a famine suffered in the city in the winter, when, as a result of a sudden outbreak of war, they were cut off from home. It was only three years later that they managed, having circled the entire globe, to return to their parents. 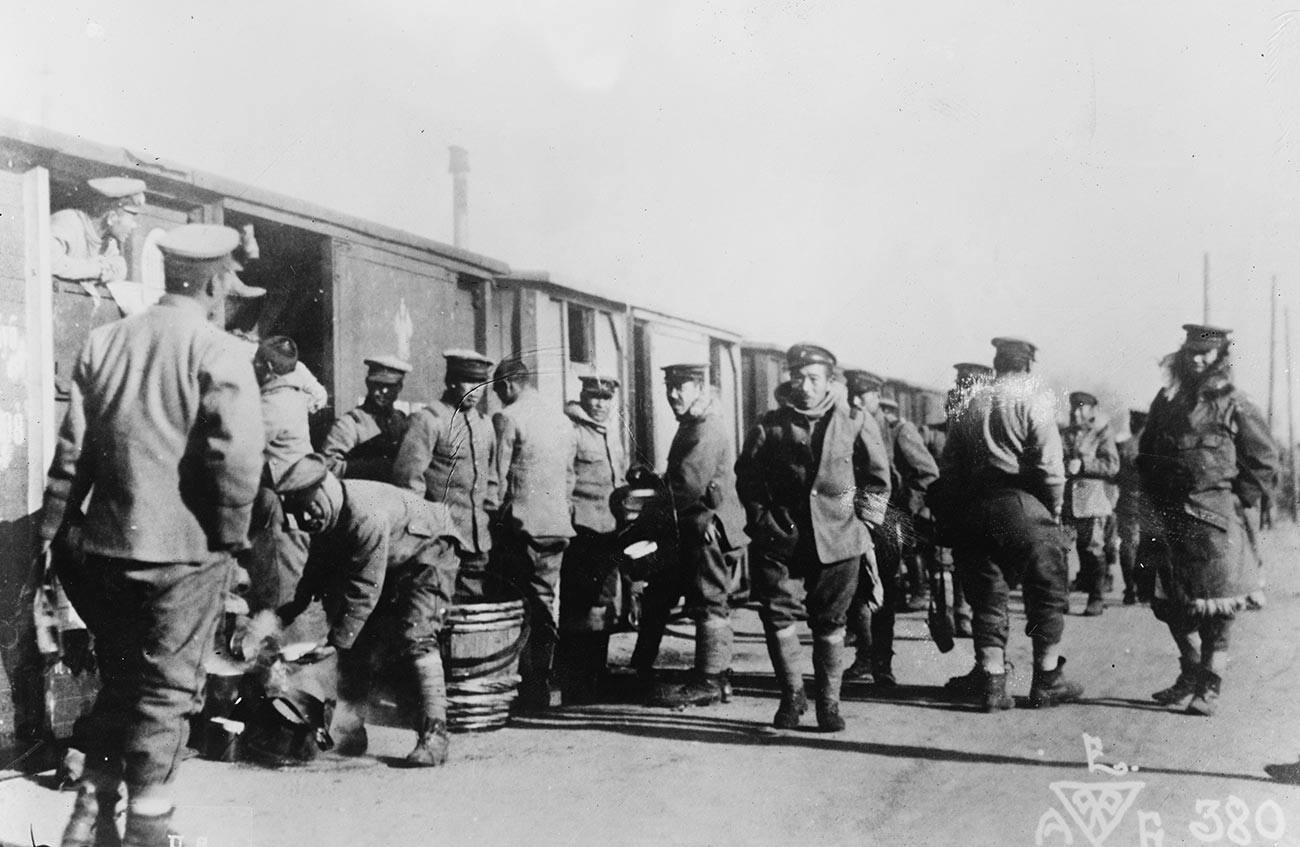 If the end of World War I in November 1918 raised a big question mark over the expediency of foreign military contingents remaining on the territory of Russia, the defeat of the White armies of Kolchak and Denikin in the summer and fall of 1919 made this stay simply pointless. Washington, London and Paris began to gradually withdraw their troops, whereas Tokyo, on the contrary, began to increase its military presence in the region. By early 1920, the number of Japanese soldiers in Russia exceeded 100,000 soldiers. 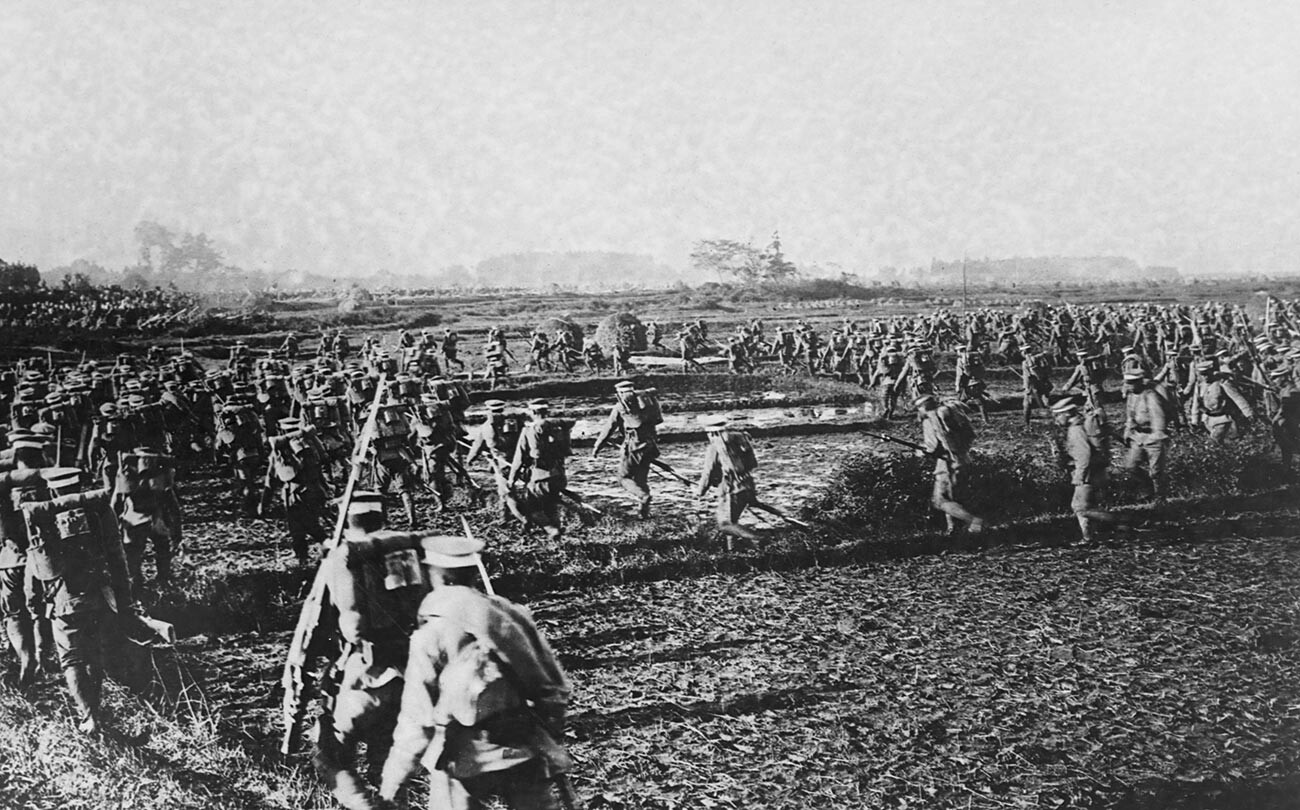 After the defeat of the White movement in Eastern Russia, the Red Army came into direct contact with the Japanese troops. However, since at the time the Soviet government was not ready for a large-scale open war with Japan, in February 1920, Lenin proposed creating a buffer democratic state in the east of the country. The Japanese, who had been exhausted by constant skirmishes with local guerillas and needed a breather, found the proposal quite acceptable. Furthermore, Tokyo hoped to turn the Far Eastern Republic (FER), which was established on April 6, into its protectorate. 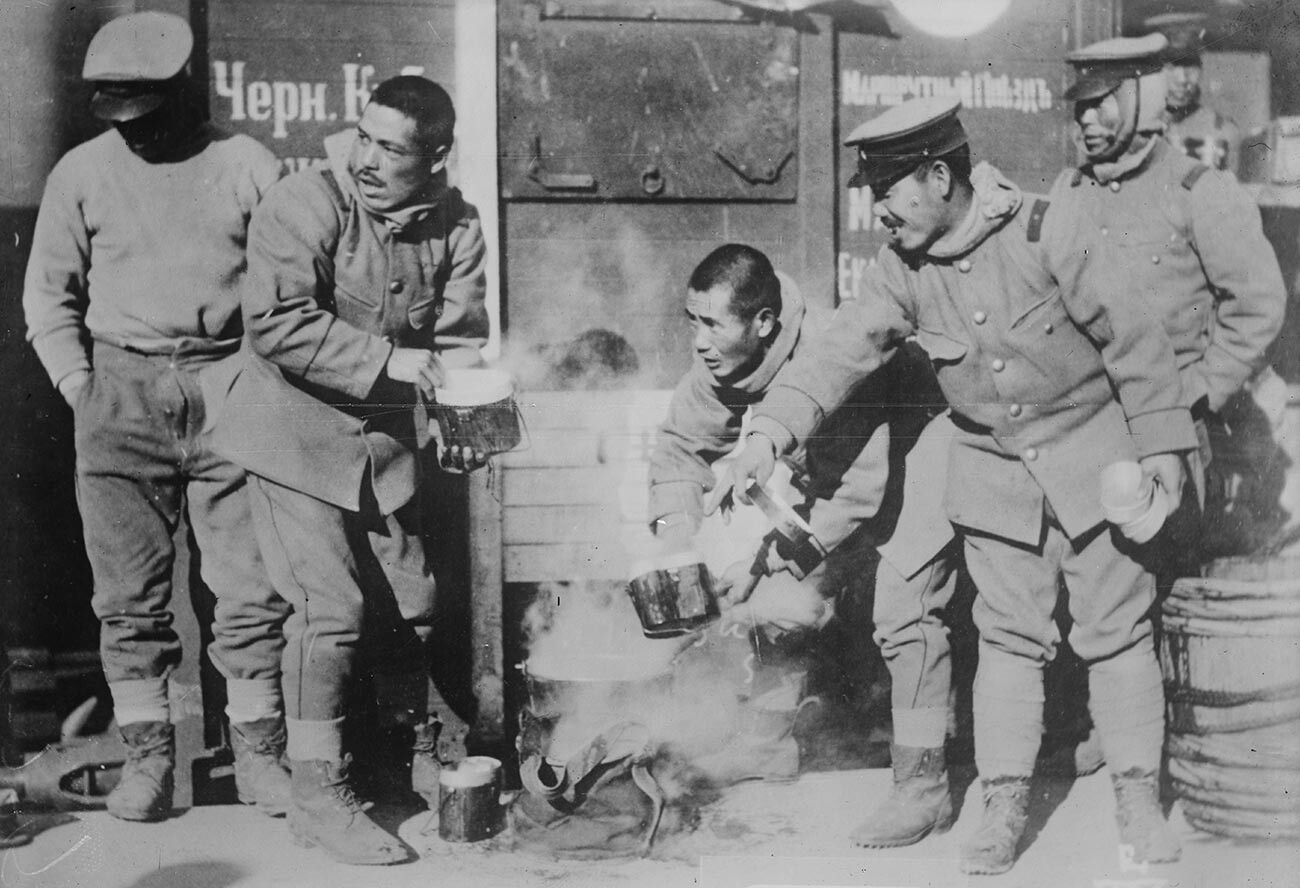 Japanese soldiers at a military canteen in Siberia.

These hopes were not destined to come true. The FER was almost completely controlled by Moscow, while its People’s Revolutionary Army successfully finished off the White Guard forces in the Far East. At the same time, the puppet governments created in the Russian territories controlled by Japan proved to be unviable. On top of that, Tokyo came under strong diplomatic pressure from the United States, which did not want to see its Pacific geopolitical rival strengthen its positions. 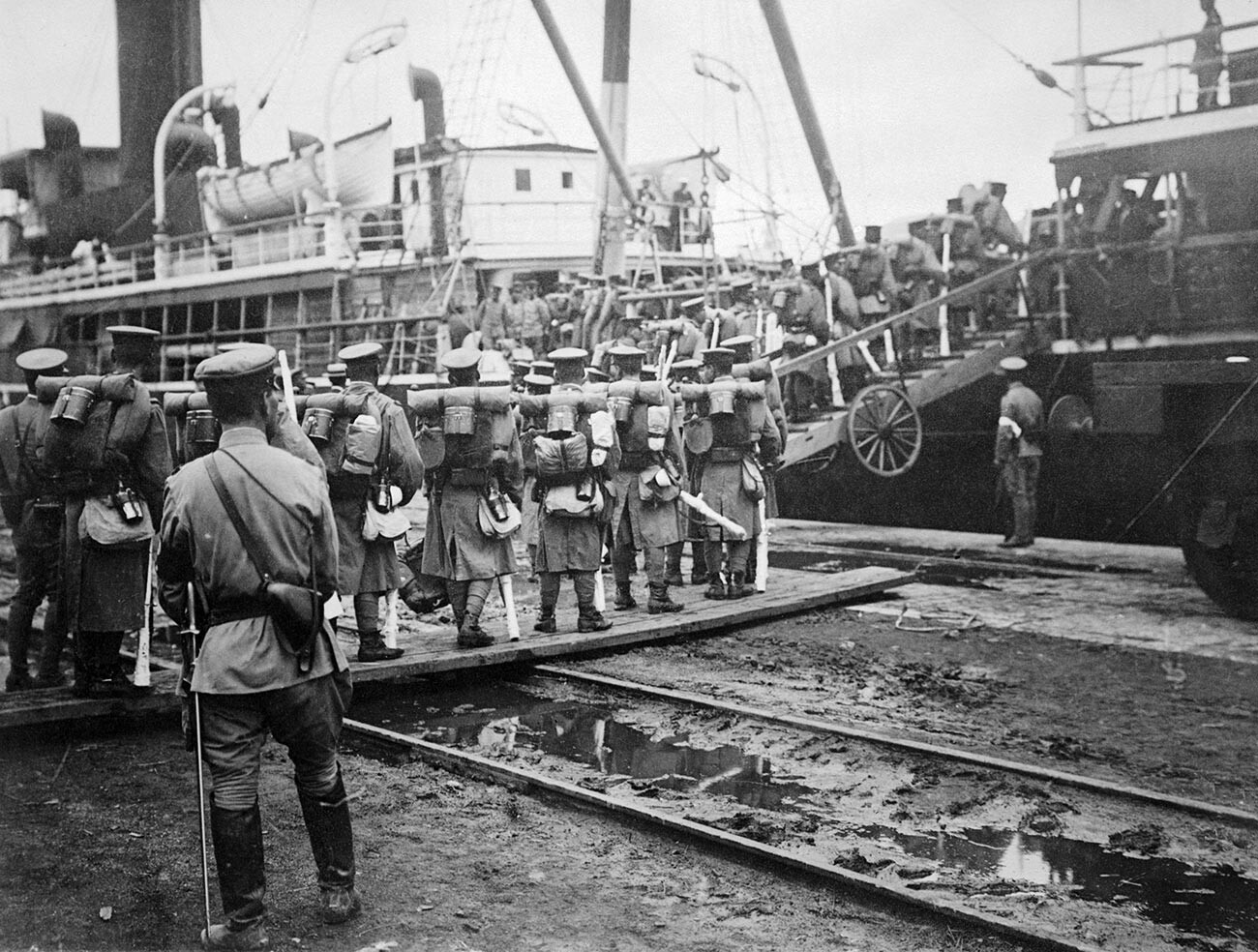 In the end, the Land of the Rising Sun began to gradually lose ground in the Russian Far East. The last Japanese soldiers left Vladivostok on October 25, 1922, and, already in November, the Far Eastern Republic became part of Soviet Russia. The Japanese preserved control only over northern Sakhalin, but in 1925, after long and difficult negotiations with the Soviet Union, they were forced to relinquish it, too. 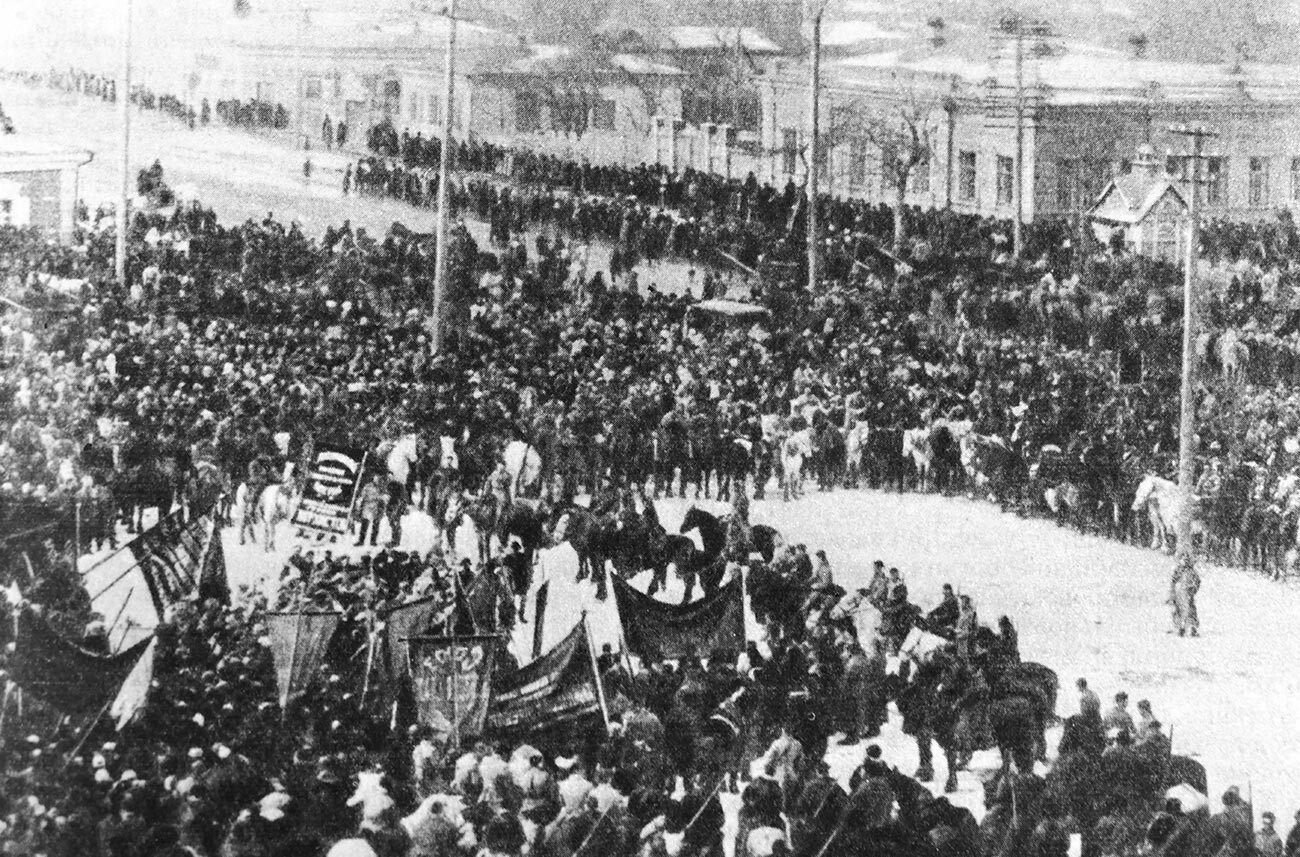 The parade of the Amur partisans after the liberation of Blagoveshchensk. 1920.