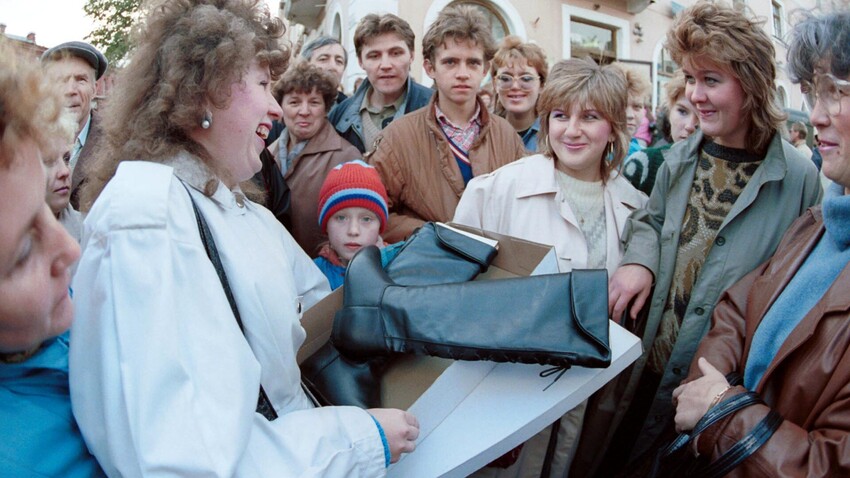 Sergey Metelitsa/TASS
Neverending shortages taught Soviet citizens to act in unorthodox ways. But, to what lengths did they have to go to get a prized sausage or at least some rough toilet paper?

“They’ve dumped new stock” was a phrase Soviet citizens understood very differently from the way it is understood today. To “dump” stock meant to put scarce goods out on the shelves in a store. Such goods would literally disappear again in a matter of twenty or thirty minutes or a few hours. Some goods never reached stores in the first place and were available only on the black market.

During the last decades of the USSR’s existence, shortages in the country became all-pervading. The Soviet planned economy failed to take account of people’s real needs. For instance, in some remote village in the Tajik mountains, one could come across an expensive men’s suit that had been supplied there in a single popular size. A state monopoly on everything, the absence of a private sector, central planning and fixed prices unregulated by supply and demand all led to chronic shortages of everyday goods, from toilet paper to fruit, soap and matches. 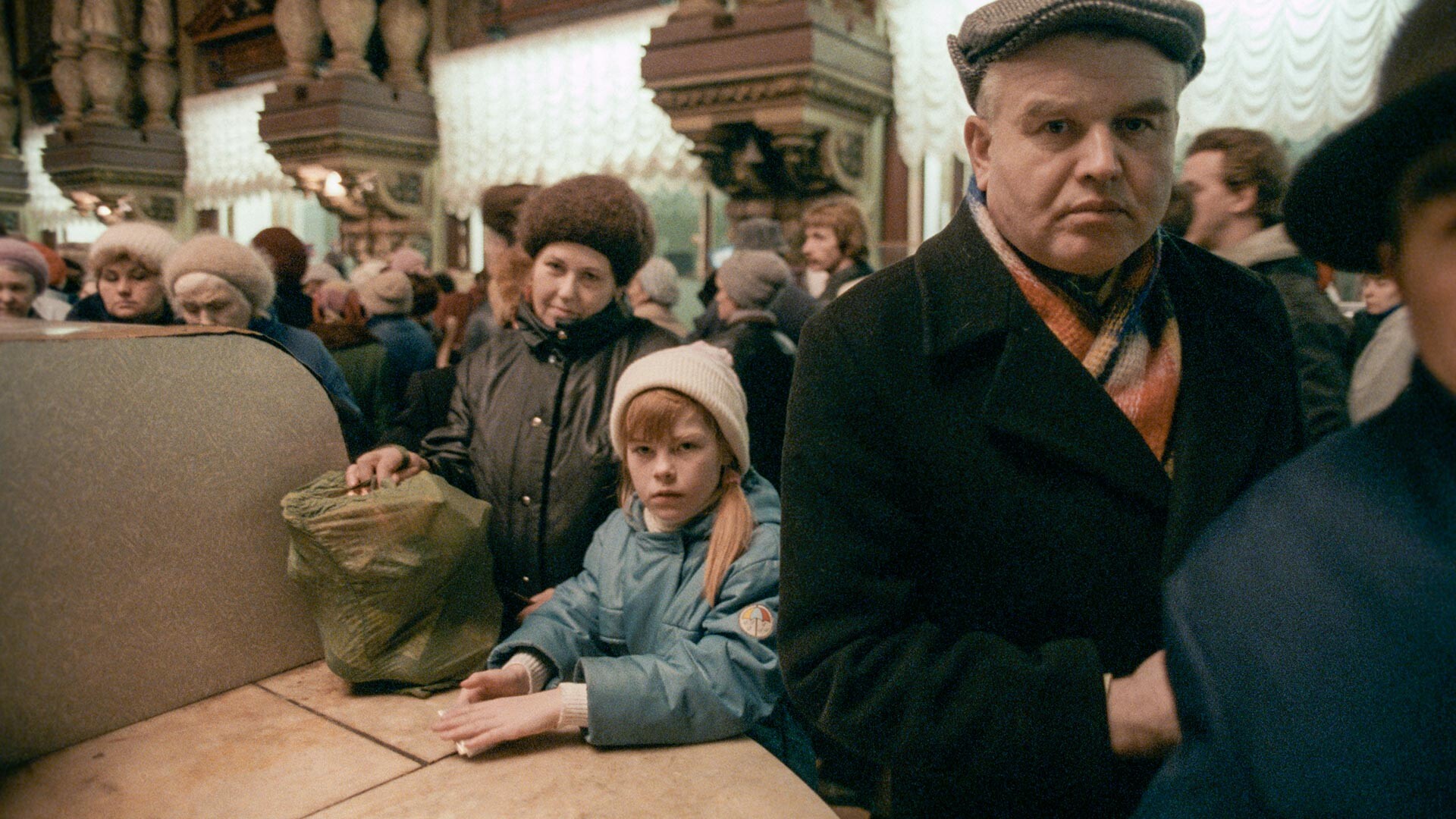 To get what you wanted, you had to resort to cunning. “People were resourceful, they knew the system and what number to call and where to go to get what they needed. At the same time, it was very tiring. I know the story of my own family and how we painted potato sacks and pasted them onto the walls, pretending it was textured wallpaper,” says blogger Yekaterina, who was a child during the Soviet period.

The main protagonist of the Soviet movie ‘People and Mannequins’ (1974) describes a scene that was very typical at the time: “At the theater, the premiere of a new production is underway. And who is sitting in the front row? Respected people are sitting there: the manager of a warehouse,  the manager of a store… All the city authorities loved the warehouse manager - the warehouse manager was in charge of the goods that were in short supply!” 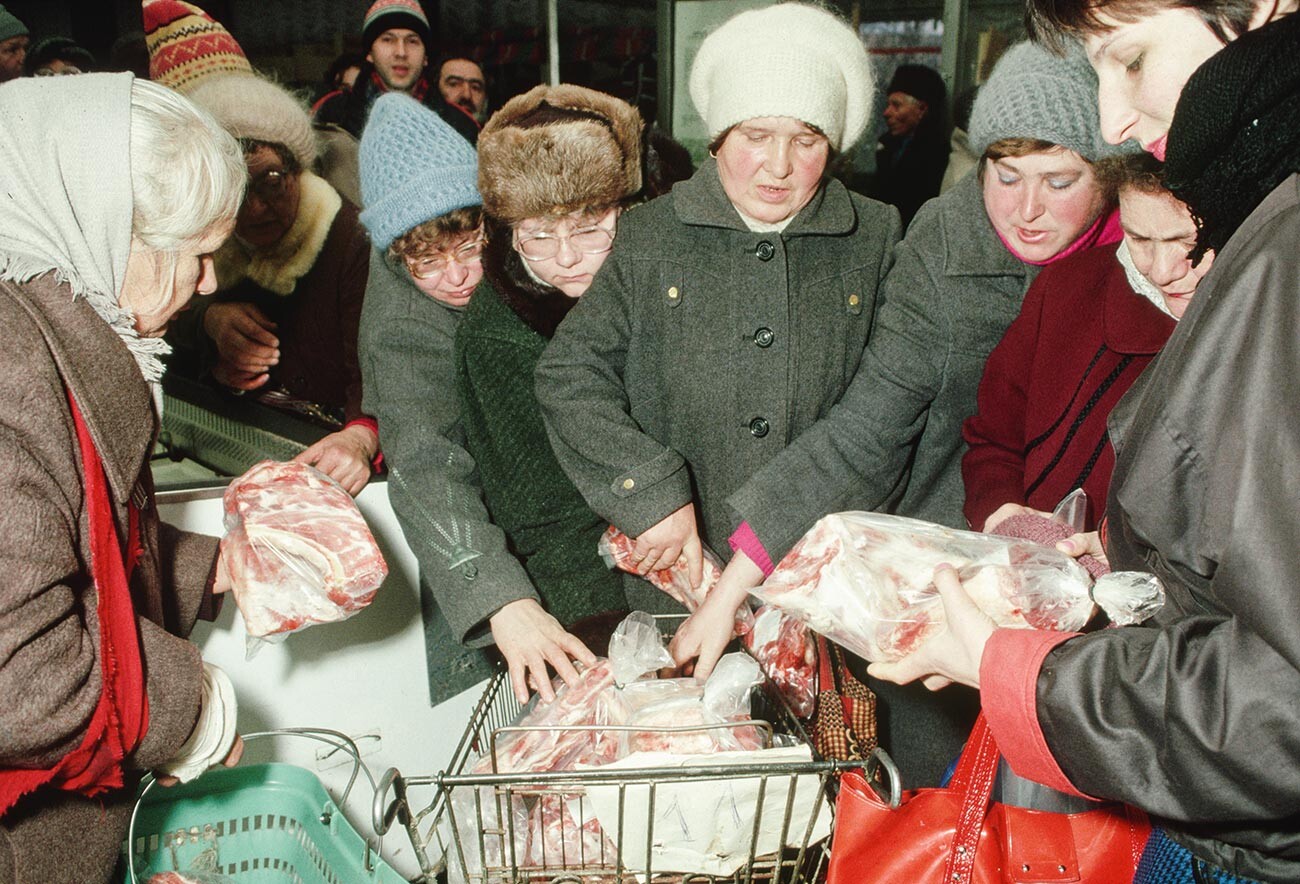 Customers quickly grab meat at a state run market during economic difficulties in the Soviet Union.

At a time of shortages, friendship with the manager of a store or warehouse, or even with an ordinary store assistant, was worth its weight in gold, because these people knew exactly what would appear in a store and when. Everyone sought such a friendship or wanted to know someone who had such acquaintances. “In the evening, the store has a delivery of some scarce produce - sausages, for example. One of the store assistants tips her girlfriend off about it. The latter runs off with the news that “there will be sausages in the store tomorrow” - first telling another of her girlfriends, then her sister, mother-in-law, godmother, her son or daughter’s teacher and her boss and all in the strictest confidence. As a result, before nightfall there is already a crowd outside the entrance to the grocery store,” recollects Raisa Kobzar from Krasnoyarsk, who worked as a store assistant for 40 years.

Standing in line at night

Anyway, even the “secret information” about the goods that were about to be “dumped” did not guarantee that you would get them. Standing in line for hours was an integral part of the shortages. Sometimes a waiting line would begin to form overnight. People would have their place written in ink on the palm of their hand and some would get a place in order to “sell it on” later. 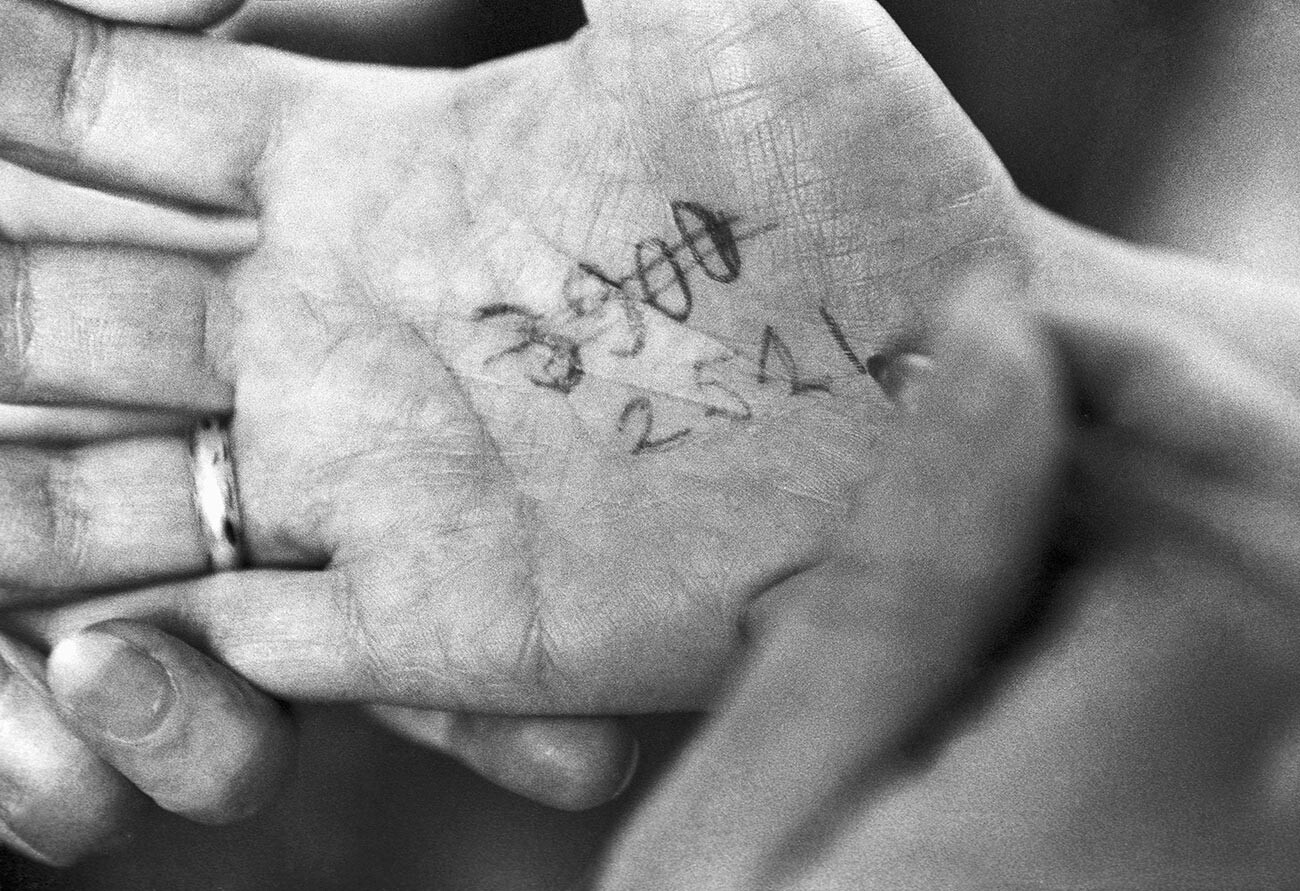 “I stood in a line for four hours to buy a jacket for my little son. My mom stayed with him at home, while I was being crushed by a seething crowd that was trying to force its way into the store through closed doors. People were being allowed inside in groups of ten or 12. The children’s store was opposite a police station and, in the end, in response to the screams, two policemen came to guard the doors and to stop them from being battered down. But, soon they were smashed in anyway,” recollects a Moscow Region resident with the online username ‘Iriss’.

Neighboring families often made arrangements among themselves, lined up for different goods and then exchanged the “spoils”.

Buying things from a speculator

“Goods that were in short supply were only ‘dumped’ during the working day and I never managed to get anything. In fact, speculators bought up the bulk of the goods from the back entrance of the store,” recalls Tatyana from Kaluga. 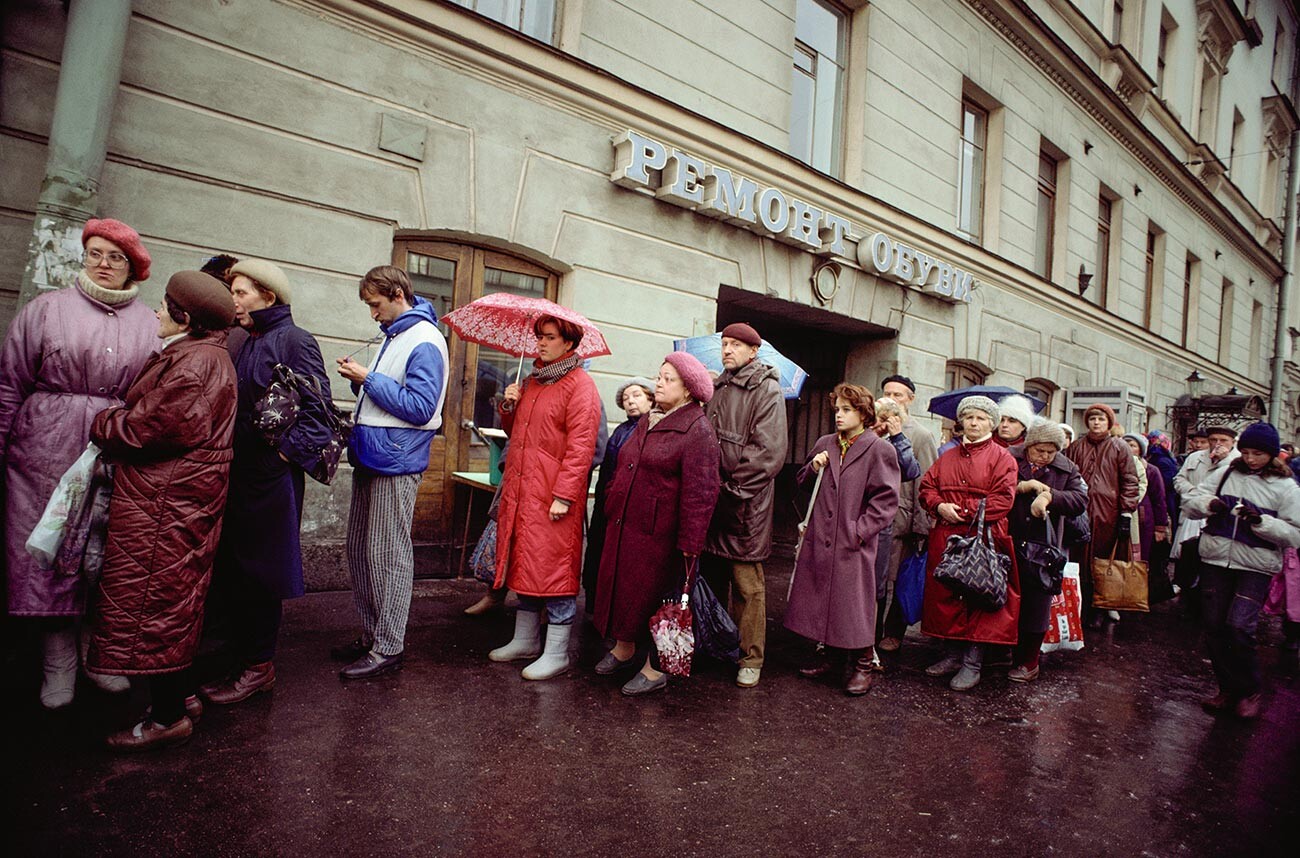 In the Soviet Union, speculation was a criminal offense  - you faced between two and seven years in jail if you were caught. But, for those ready to take the risk, it was a golden age. Lacking both the time and the means, ordinary people bought goods from them even with a large mark-up. As a rule, the speculators themselves were “in with” the managers of warehouses and stores. The Department Against Misappropriation of Socialist Property (OBKhSS) used to organize raids to catch both the former and the latter. But OBKhSS staff also suffered from the same shortages, so they sometimes warned the stores of impending swoops - in exchange for sausage, fish and other goods.

‘Fartsovschiki’ was the name given to black marketeers who bought and sold imported goods. It was simply impossible to get such goods in Soviet stores (with the exception of the ‘Beryozka’ chain of specialist stores where zagranrabotniki (“foreign workers”) - diplomats and technical and military specialists - could spend the U.S. Dollars they had officially earned in the course of trips abroad). This applied to ordinary foreign-made chewing gum and cigarettes, as well as foreign electronics and jeans. 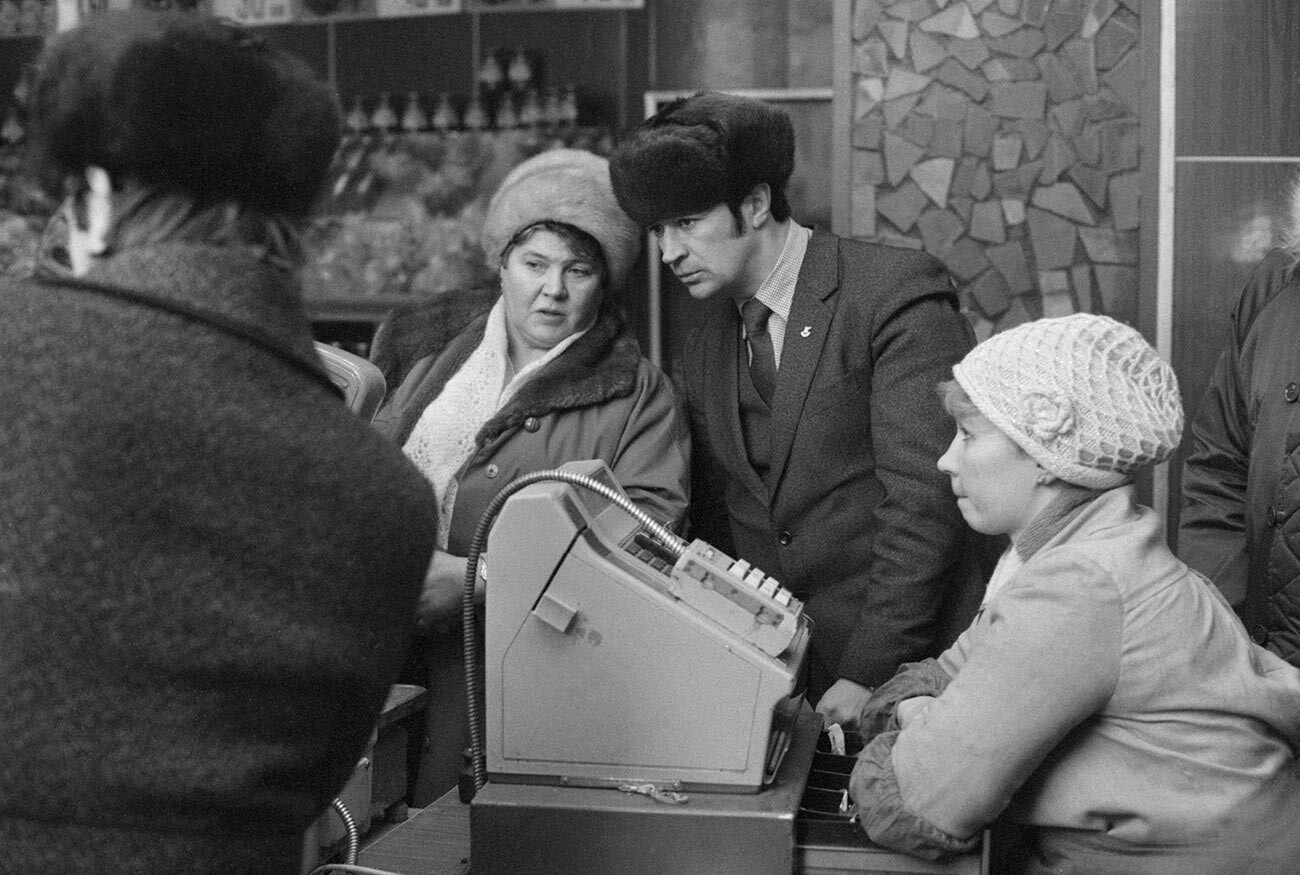 The fartsovschiki often acquired these goods directly from foreigners who were on business trips to the Soviet Union, or from individuals who came into close contact with them, because of their line of work (eg. taxi drivers, diplomats, guides, hotel employees and interpreters).

You could buy a pair of foreign-made jeans from a fartsovschik for 150 rubles, while the average monthly wage in the 1970s-1980s was 80-200 rubles. Like the speculators, the fartsovschiki operated outside the law, but they created a whole clandestine empire.

Traveling to a different town

Finally, people could go shopping for food and other goods in another city. Although this might have seemed like the most labor-intensive option, in actual fact, it wasn’t. The Soviet Union had well-supplied cities, where the situation with stock was better than in the provinces. These were Moscow, Leningrad (now St. Petersburg), the capitals of the union republics and “closed” cities with production facilities deemed important to the state. That is why people who hadn’t managed to buy what they wanted would take a suburban or mainline train or bus to the nearest well-stocked city. 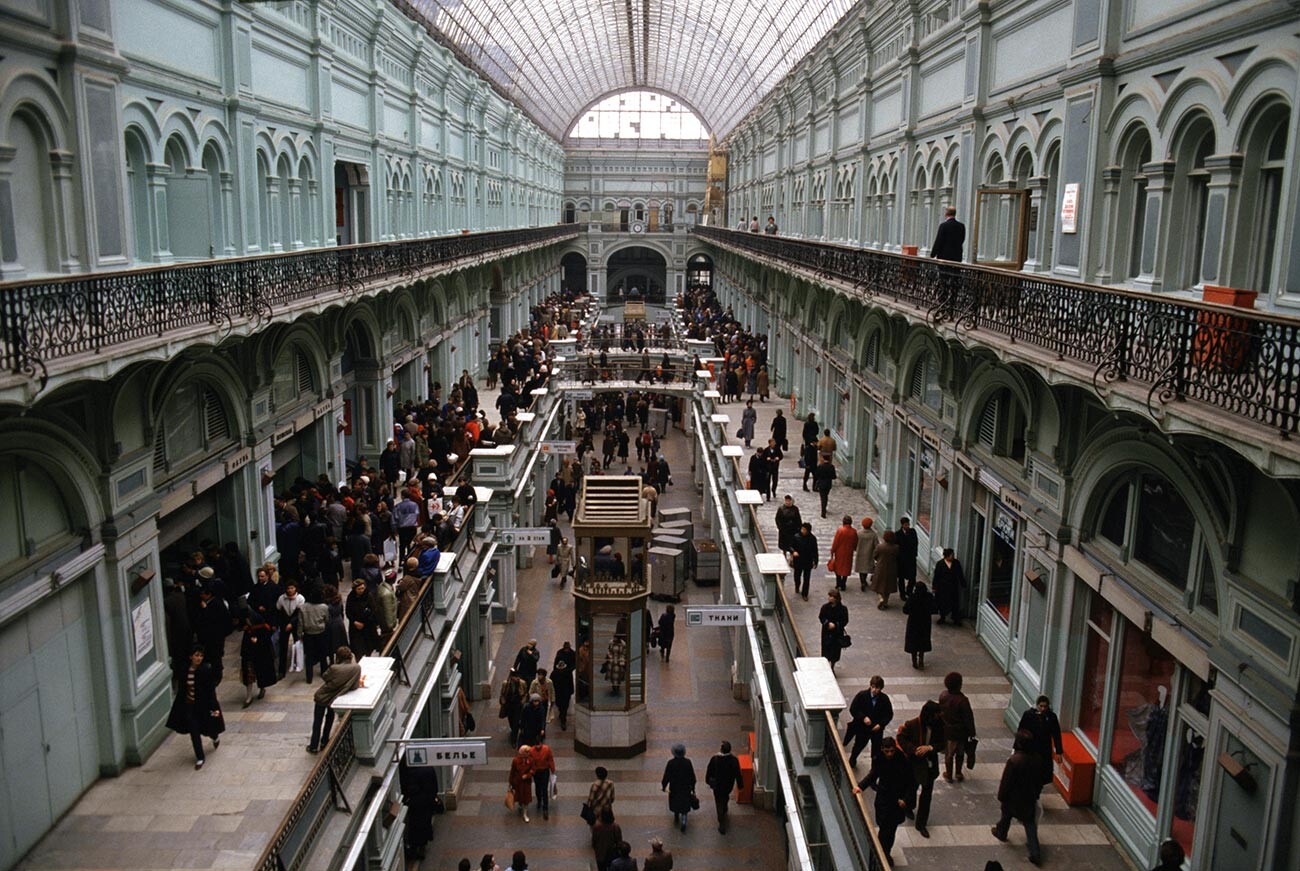 “During the Soviet-era shortages, people had to travel to Moscow for everything and stood from four to six hours in lines. It was an everyday thing. First, something to wear, clothes, at the GUM, TsUM and Petrovsky Passazh department stores in the center; then a visit to Moskvichka and Sintetika on Kalininsky Prospect; and then, in the evening, the small grocery stores on Pyatnitskaya Street, where you could get the full monty:  cheese, sausage, cooking oil, imported chicken, mayonnaise in small glass jars and, it goes without saying, freshly-ground coffee. And then the suburban electric train would be filled with the aroma of coffee, oranges and Lyubitelskaya sausage all the way home…” recalls ‘Iriss’.

In the bleak 1980s, however, the problem of shortages reached breaking point - even in Moscow. Goods started to be sold only on presentation of a “Muscovite Pass”, which you could only obtain with a Moscow residence permit. These were also extensively forged, but the flow of “sausage trains” did, nevertheless, abate.