What work did children do in the Russian Empire? 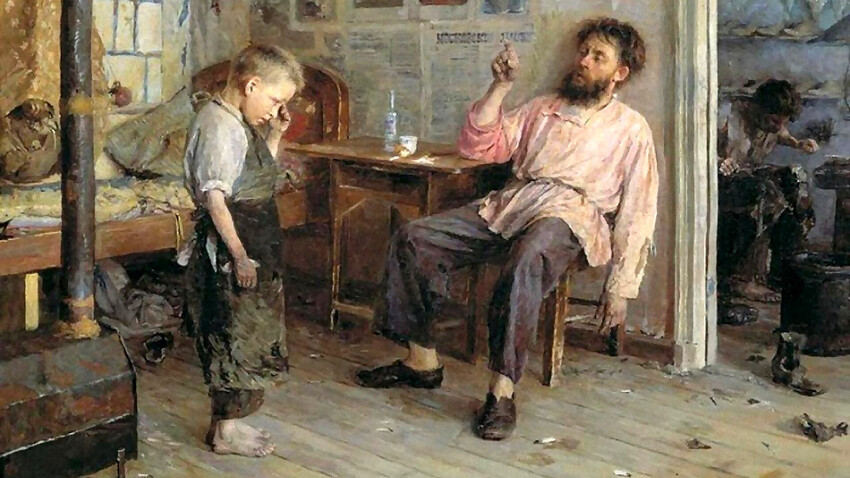 Tretyakov Gallery
In Russian peasant families, children were taught responsibility and a strong work ethic very early on: this was both the main objective of education and the key to survival. But in 18th-19th centuries, child labor became a digusting feature of Russian industrial society.

In the Russian language, the word “child” (ребёнок – “rebyonok”) shares a root with “work” (работа – “rabota”) and “slave” (раб – “rab”), which hints at the fact that children were traditionally ‘employed’ by their parents in doing chores. Unfortunately, in certain historical periods, slaving away took on a much more literal meaning. Such was the case with the 18th and 19th centuries, when children were employed in factories and mines, sometimes in appalling working conditions.

In peasant Russia, for centuries, age was measured in seven-year stretches. From birth to seven years old, children were treated mostly as, well – children. They were assigned simple household chores, and, little by little, taught to help their parents in the day-to-day. However, as the child reached seven, they became what was referred to as a “rebyonok” – a small person who now had some – if minor – responsibilities.

There was no question that a child must obey his parents and grandparents. So, on their seventh birthday, the boys received their first pants and shirts, and the girls – their first gowns, and started their full-time jobs as peasant children.

What village boys did 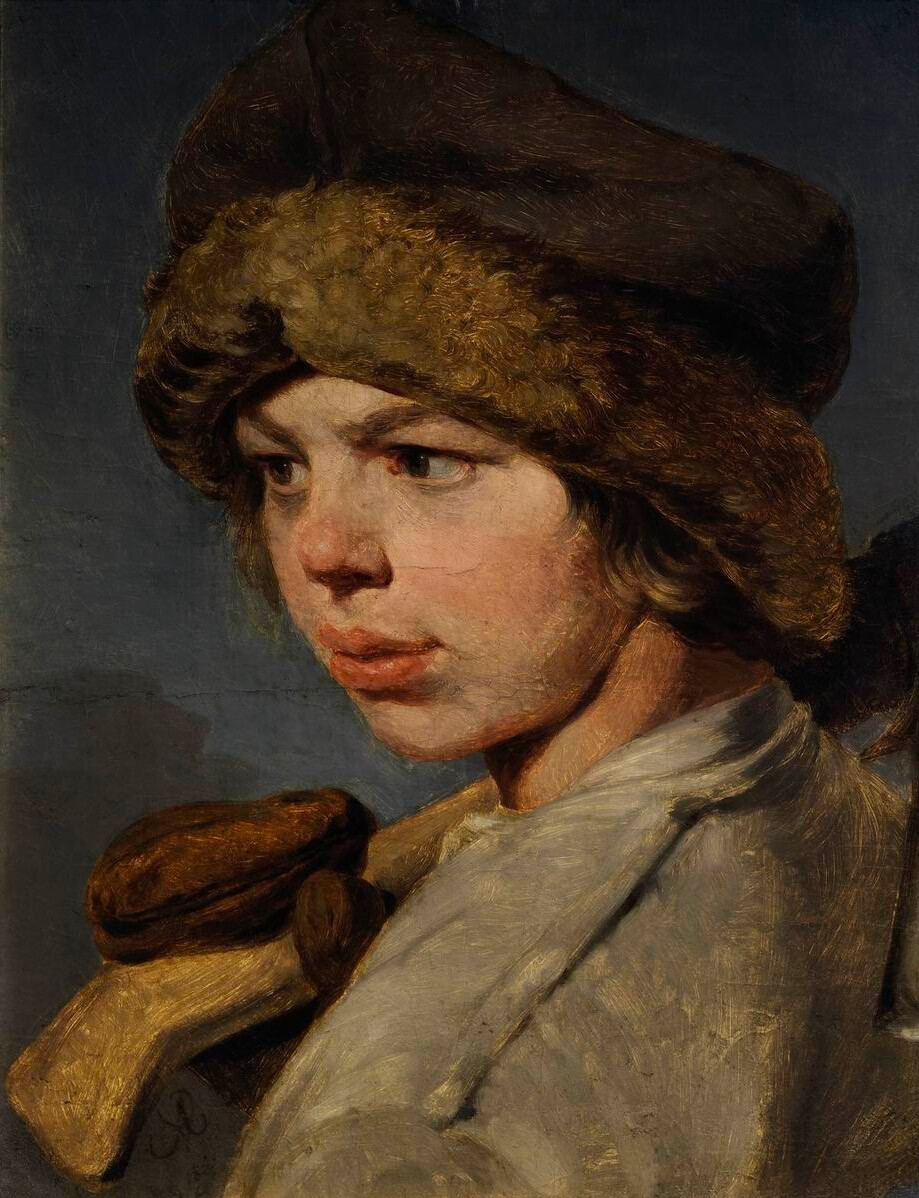 It’s nothing unusual these days if a mother asks her son to do the dishes or vacuum the floor, but it would have been unthinkable in Old Russia – all chores were strictly gender-defined.

One of the first things boys learned was making lapti (birch shoes) and wicker baskets. Interweaving birch bark to make lapti or baskets was not very complicated, but a meticulous craft that required diligence and persistence – two qualities that Russian peasant kids would surely need later in their lives. Also, lapti were quick to wear out, so Russian men and boys spent a good part of their time off daily work sitting and making new lapti for their families. 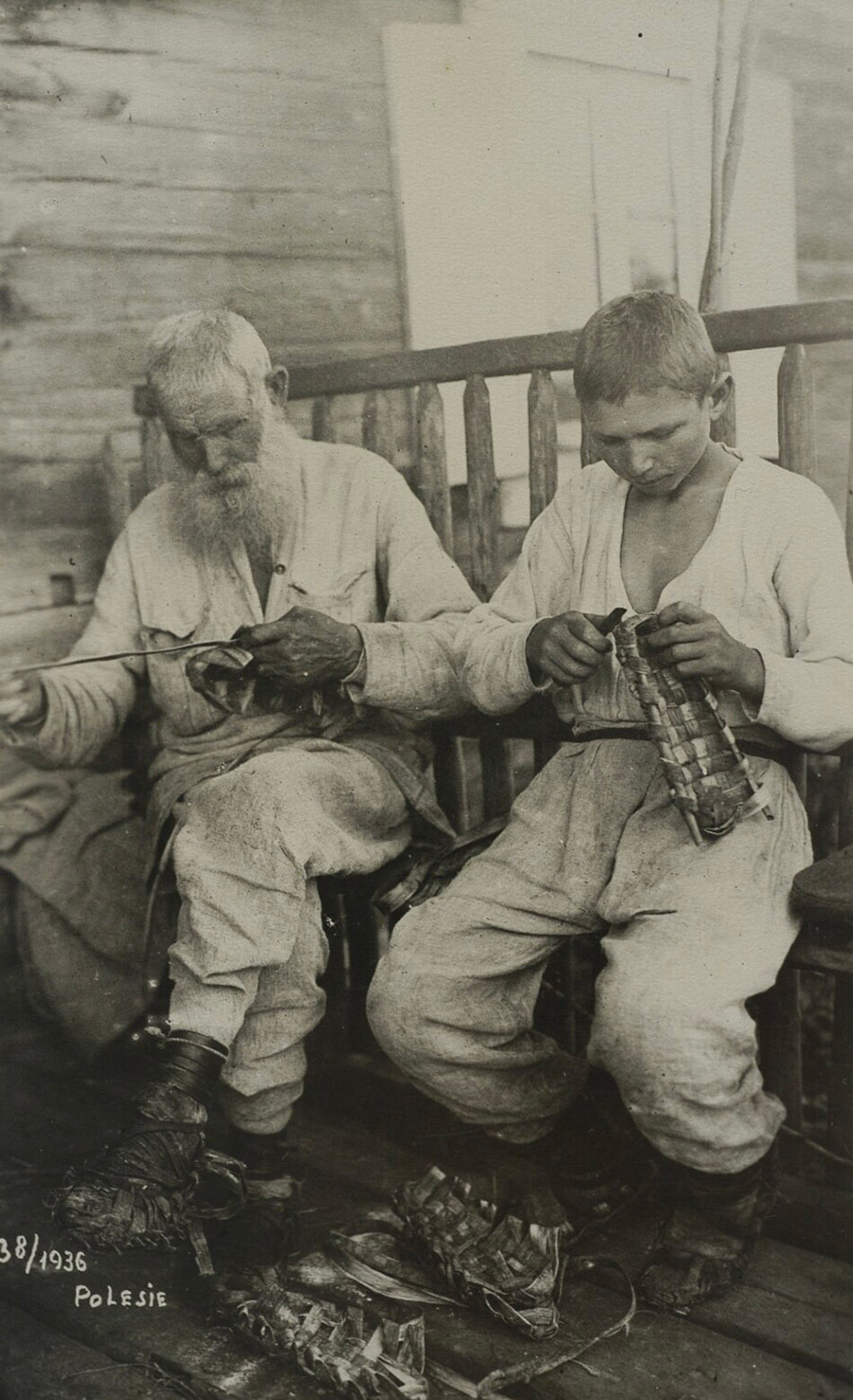 An old man and a boy making lapti in Polesye.

Boys also learned to carve out simple wooden toys for themselves and their younger brothers and sisters. They also learned basic fishing and hunting skills with their fathers. Tending cattle – combing and washing it, and milking cows – was a chore for both boys and girls. But one of the main workforces in a peasant family has always been the horse. Grazing the horses at night was the boys' responsibility. That is why, from the earliest years, they were taught to harness and ride them, to drive them while sitting or standing in a cart, to take them to water. Some boys could become skillful in making harnesses – an indispensable skill in the village. 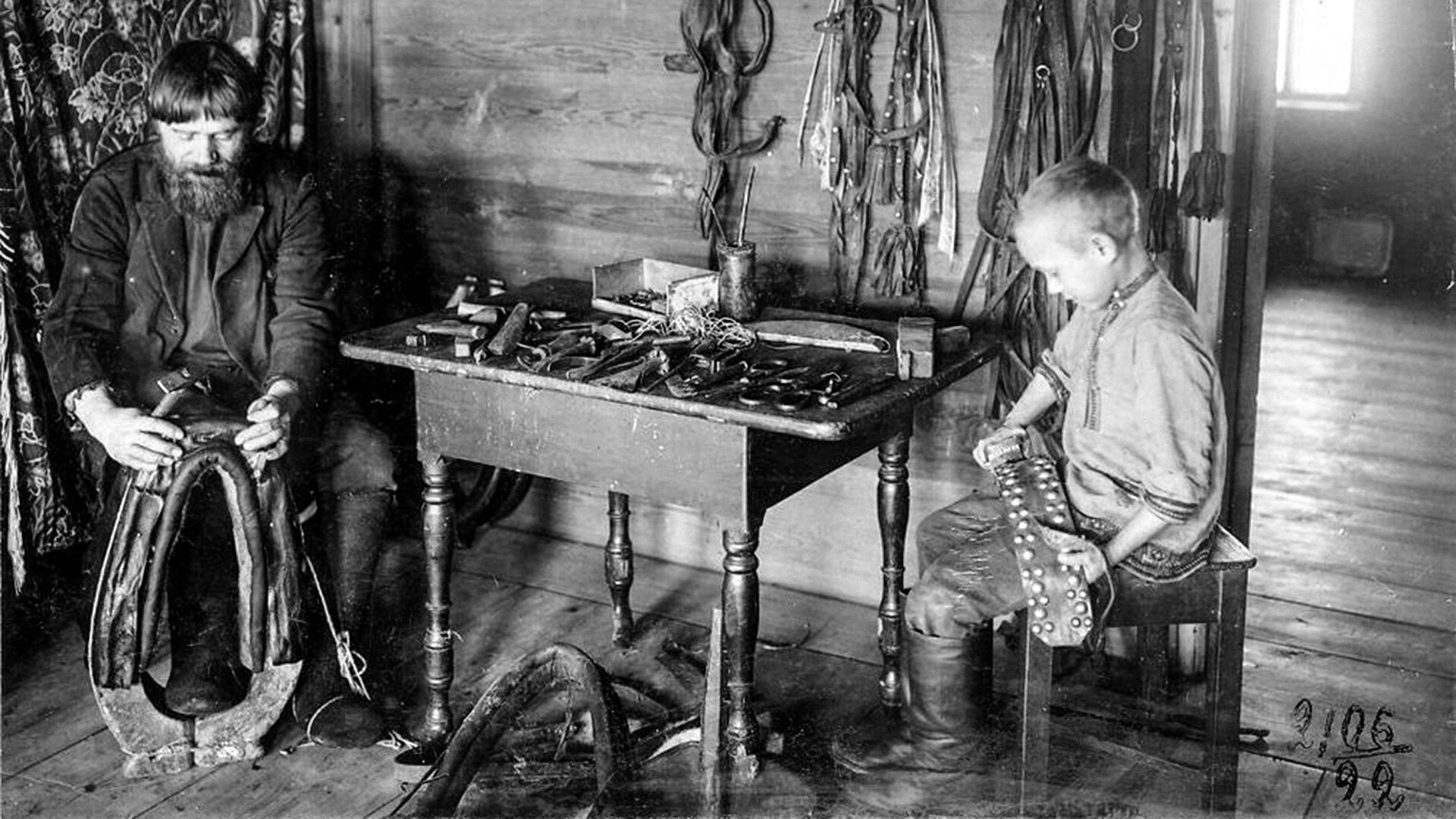 In agriculture, the work was also gender-specific: while men did work in the fields, women looked after backyard gardens (except for harvest time, when everybody who was able to harvest would goto the fields). Accordingly, boys would start to help their fathers in plowing early on – even if they were too little to actually plow; the father could put a boy on the harrow to weigh it down. From about age 12, the boy was allocated a small plot in the field, which he would care for on his own. By the time he hit puberty, such a boy could already become an experienced farmhand. 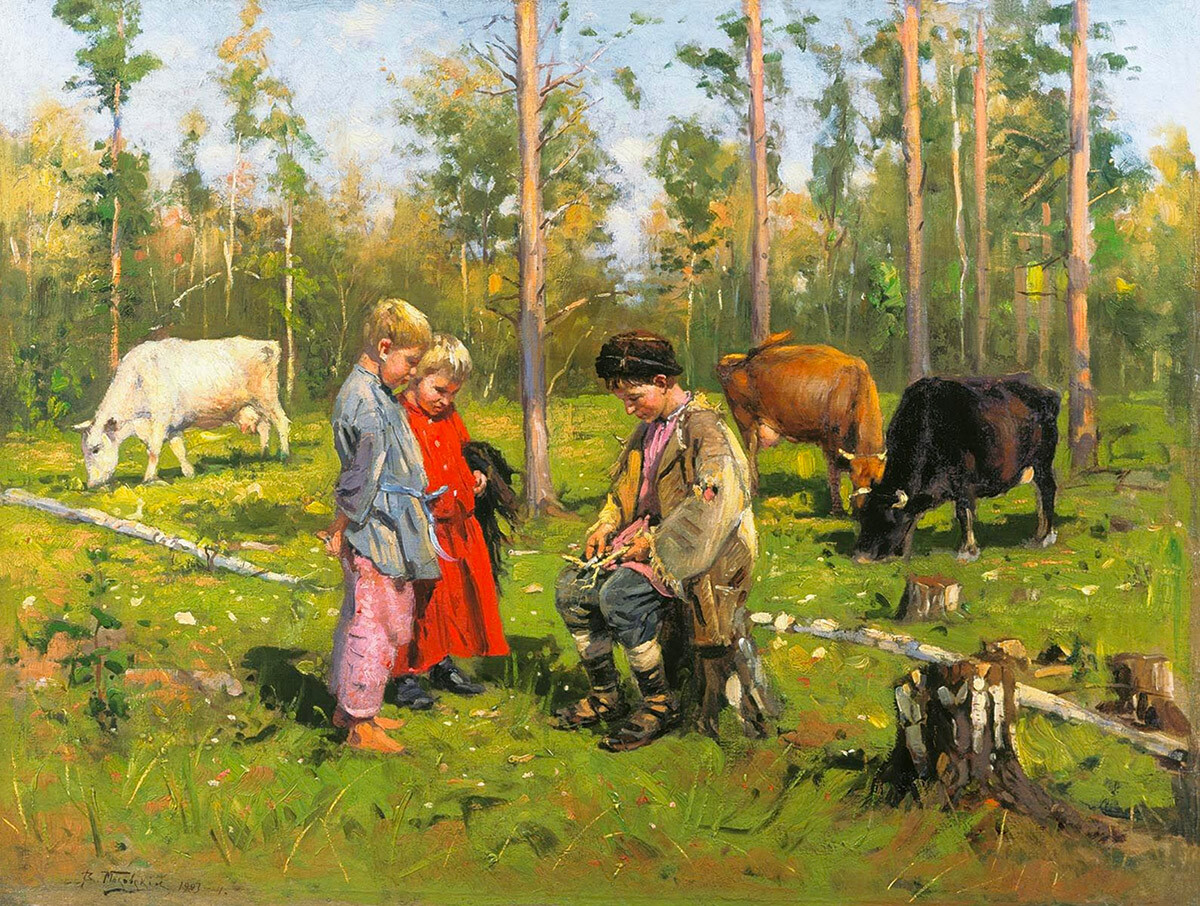 As boys reached adolescence, they could learn some useful craft – become a cattle herder, a farmer, a woodsmith, or choose any profession, suitable for a villager. It was different for girls, who usually stayed in the village, as women were prohibited from working and taking up crafts up until the second half of the 19th century.

What village girls did 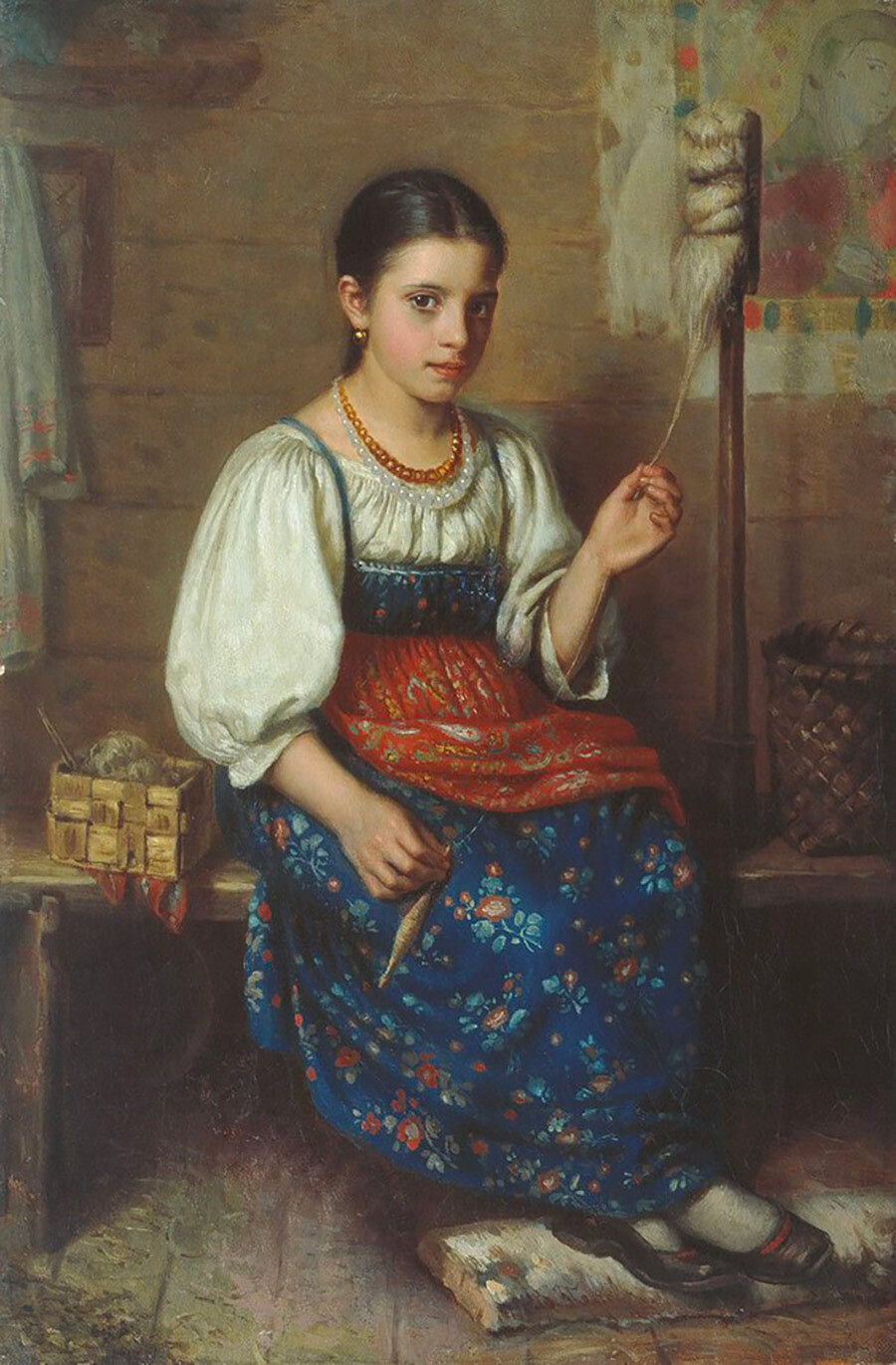 Traditionally in Russia, the umbilical cord of a newborn girl had been cut with a spindle. This ritual was meant to connect them with the craft of spinning from the very first moments of their lives. If you were a girl born into a peasant family, spinning wool on a distaff would probably become one of your main occupations. By age five, a girl usually became a relatively experienced spinner, and so was more useful to the family earlier on than a boy of her age.

Other compulsory girl chores centered on the household: sweeping the floor, washing and cleaning the benches, shaking and cleaning the rugs, bedsheets and pillows. Girls learned to wash clothes in the house, using lye produced by soaking cinder from the stove, and rinse them in the running river water. These chores made young village girls much more physically strong than girls of the same age today. 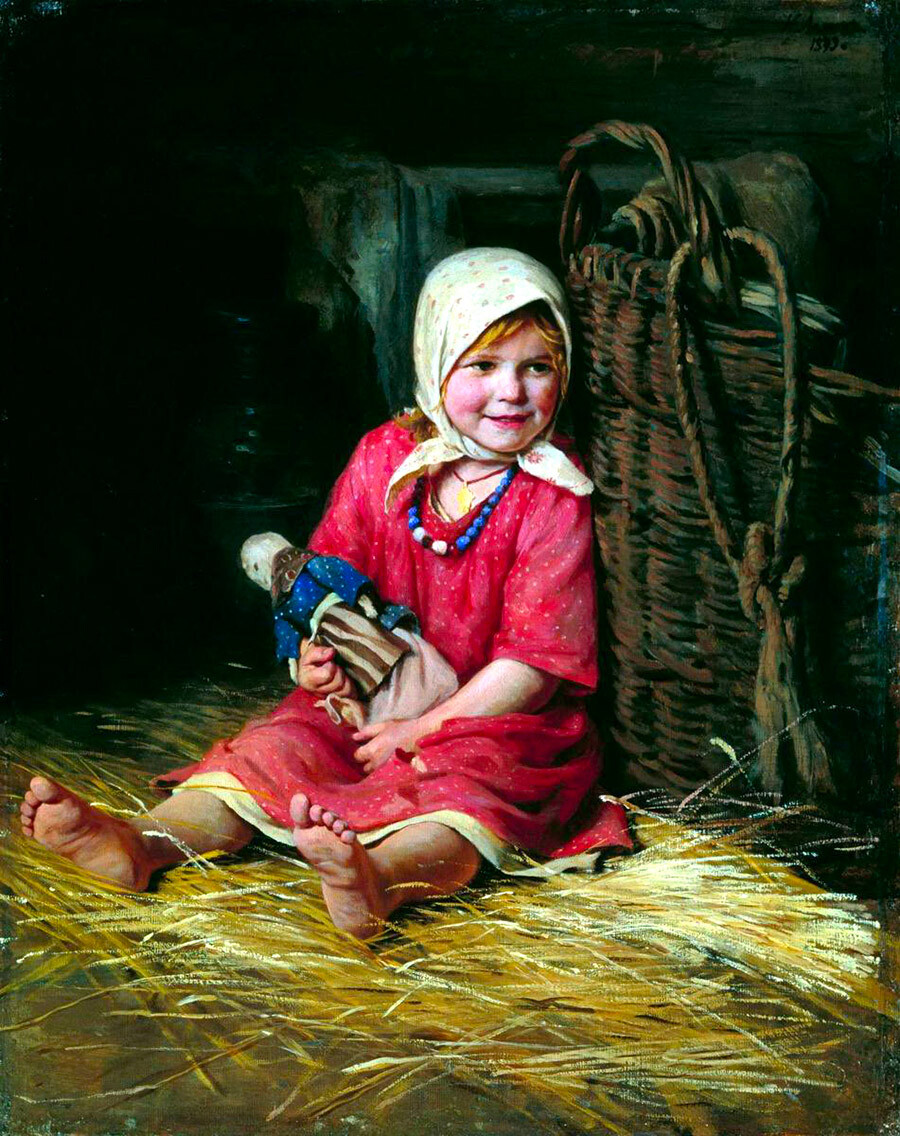 "Var'ka" by Karl Lemokh. A rag doll can be seen in girl's hands.

Looking after younger children was also a job for young ladies. They learned how to make rag and wicker dolls for them, recite nursery rhymes, bedtime stories, and sing lullabies. A girl knew how to swaddle a baby, how to feed it using hollowed animal horns (an ancient version of a feeding bottle), or how to make a pacifier out of a piece of cloth and chewed bread. Often, after turning 11-12, girls got work nursing babies in other peasants’ families in the same village.

The despicable practice of child labor in factories 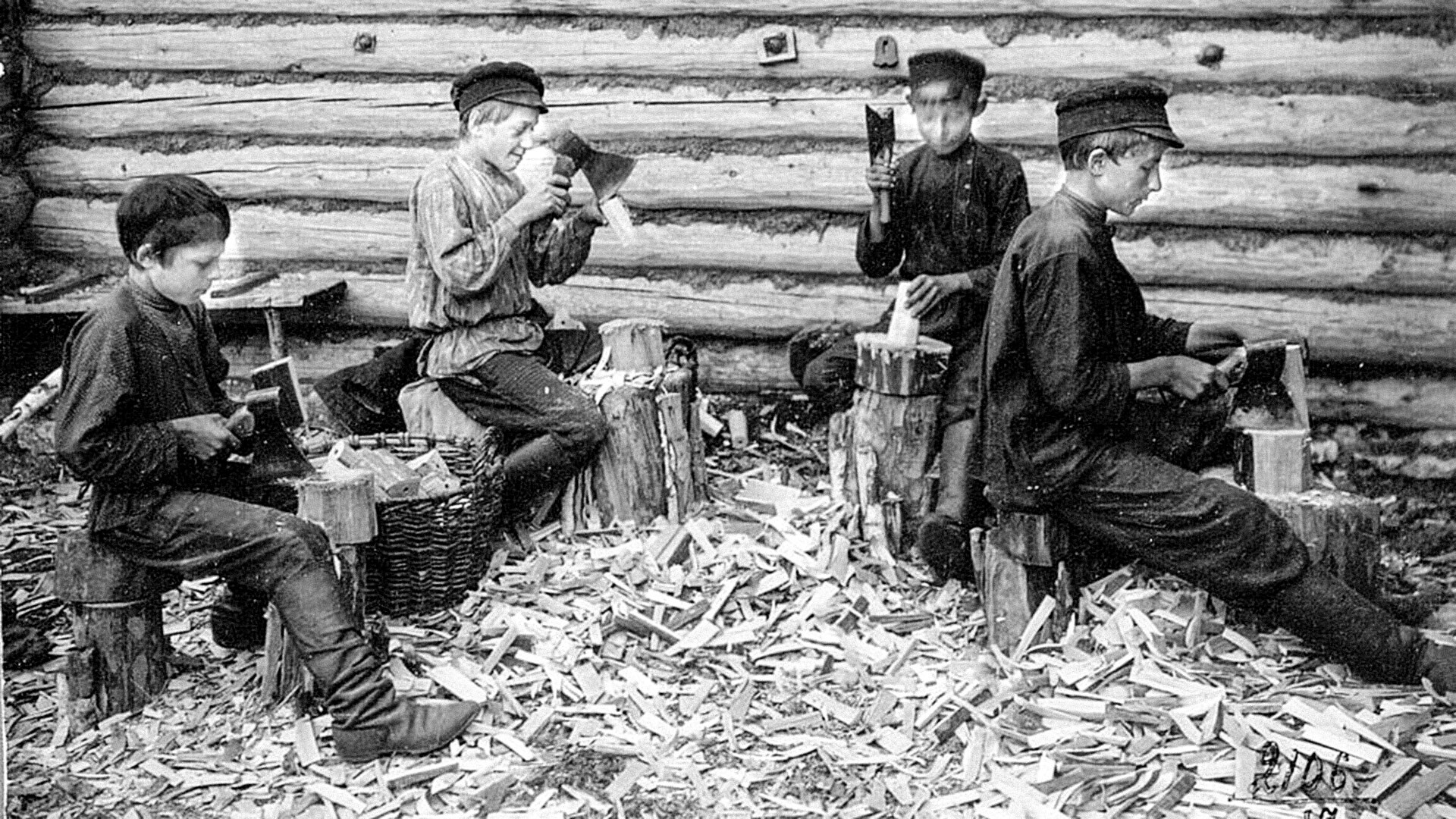 With the arival of the industrial revolution in the mid-18th century, child labour became commonplace. In the absence of laws regulating their work, children – mostly teenagers – were exploited heavily. Using children as mere slaves was unfortunately a frequent occurrence in many countries of the world in those times, and Russia was no exception.

Child traffickers in pre-revolutionary Russia used to buy children from poor peasant families that couldn’t provide for their numerous offspring. For a boy or a girl, such an ill-moraled peasant could receive 2-3 rubles – in the 19th century, this was the price of a hat, or a night in a middle-class hotel. Parents supplied the child with clothes and provisions for the road and said goodbye – often, forever.

On arrival in St. Petersburg or Moscow, the children were sold as workforce to merchants and factory owners – for two or three times the price the trafficker paid to their parents in the village. Girls were ‘employed’ in shops, or as cooks and house maids, at the very best. Boys had it harder, as they would often be ‘employed’ by a factory owner. Although there were certain government inspections that could stop the exploitation of child labor, there were no laws that really regulated it. 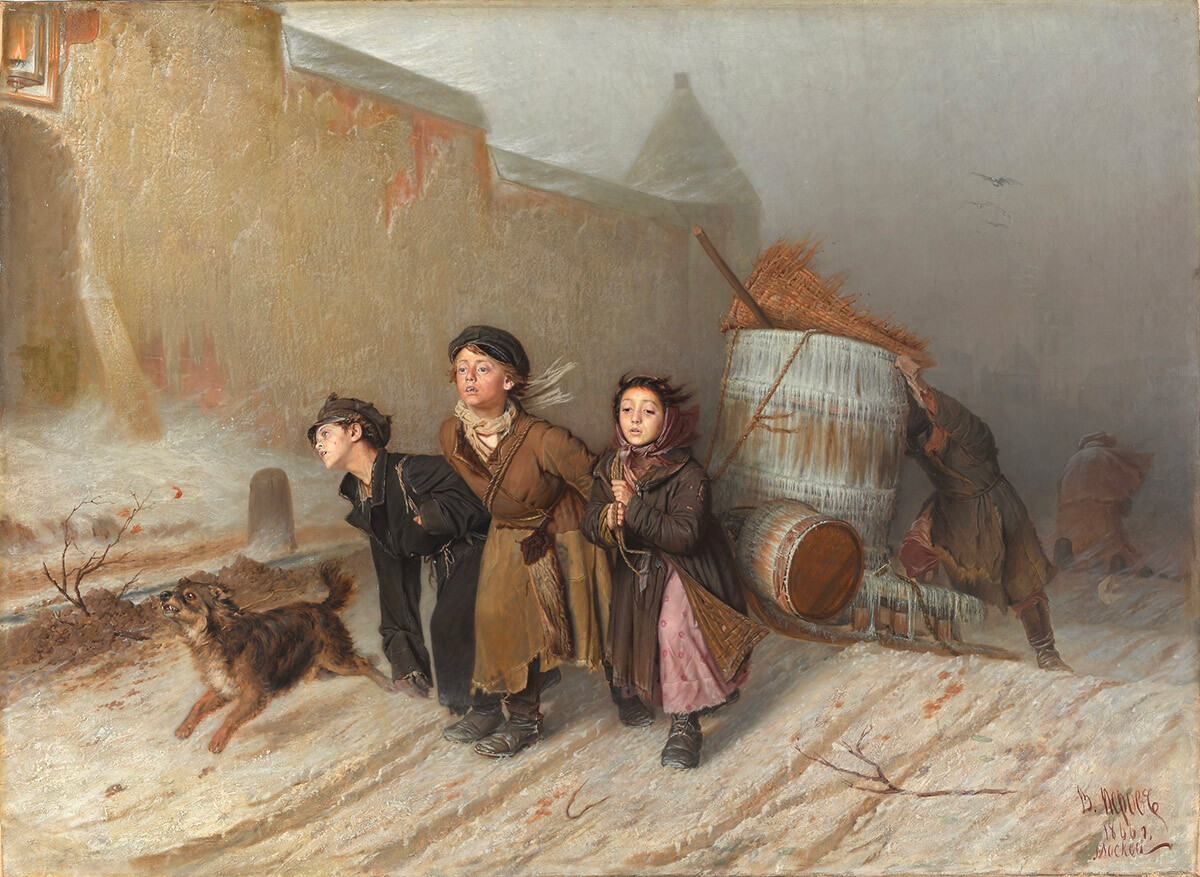 "The Troika (Apprentices dragging a water barrel)," by Vassiliy Perov, 1866.

For example, in Tomsk, at the match factory of the Kukhterin family, children filled wooden boxes with matches. It was necessary to fill a box without a single match falling to the floor – each fallen match resulted in a fine that was excluded from the child’s pay. Children worked for 12-14 hours with only a break for lunch, and another one for afternoon tea.

In general, Russian businessmen who used child labor didn’t really care for the children’s well-being, health, or education. If the children didn’t perform – well, they were just fired – and then, boys joined the ranks of beggars or petty criminals, and girls would, in the very worst of circumstances, become prostitutes.

By the beginning of the 1880s, the government became concerned with the situation, and in 1882, a law called “On the minors working in plants, factories and craft productions” was passed through the State Council. It banned work for children under 12 years old, limited the working time to eight hours a day (no more than four hours without a break) for children aged 12-15, and prohibited night shifts (from 9 pm to 5 am) and Sunday work. The use of child labor in harmful industries was also banned. 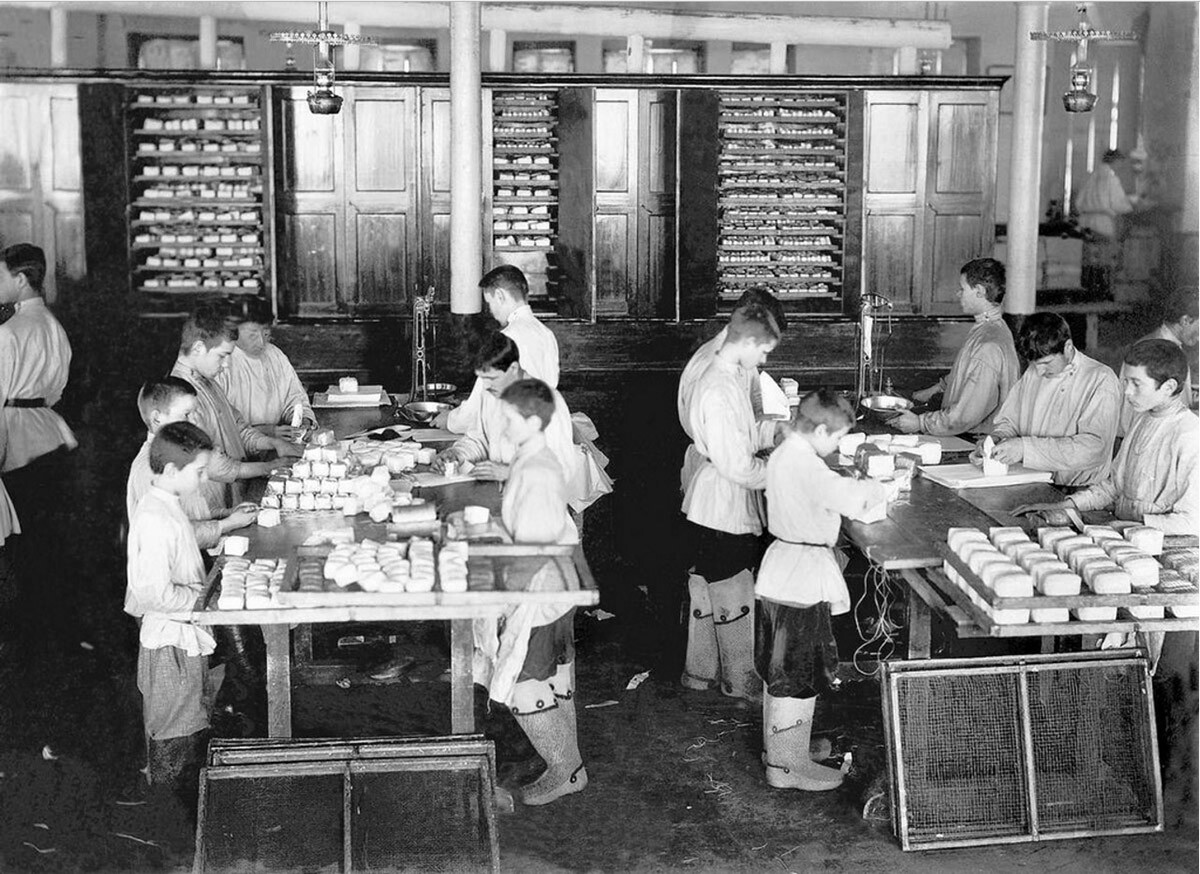 Children working at a tea factory in Chelyabinsk.

However, the law didn’t come into full effect immediately, and didn’t apply to all industries – the lobby of child labor users in business was still too strong. Factory owners lied about the age of their child and adolescent workers to make them eligible under the law, and in so doing, simply concealed the fact of the use of child labor. 20 years after the law was passed, in 1903, a factory inspector in Saint Petersburg region, stated: “Many brick factories hire workers under the age of 15, and these minors work on an equal basis with adults – that is, up to 11.5 hours a day.”

The statistics on the first decade of the 20th century shows a steady growth in the use of child labor, notwithstanding all the laws. In the capitals and large cities, inspections were carried out, but in deep Russia, children were exploited lawlessly. Only the Bolsheviks in 1918 adopted the first Labor Code that completely prohibited all labor for individuals under 16.