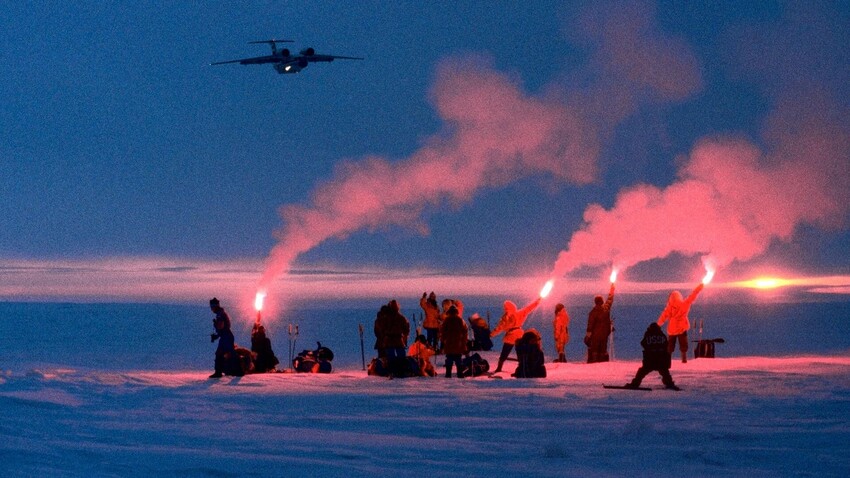 V. Chistyakov/Sputnik
Amid the Cold War, political grievances were put aside for the sake of survival.

In 1988, as the Cold War divided the world in two, a team of Soviet and Canadian skiers, nonetheless, teamed up to undertake an arduous mission: to ski from the Soviet Union to Canada via the North Pole.

Plans for the expedition began in 1986, albeit in a different form. Initially, a group of Soviet scientists and radio amateurs nurtured plans to ski to the South Pole. In the course of the initial preparation, the adventurers reconsidered their final destination and, instead, planned a ski expedition to the North Pole. 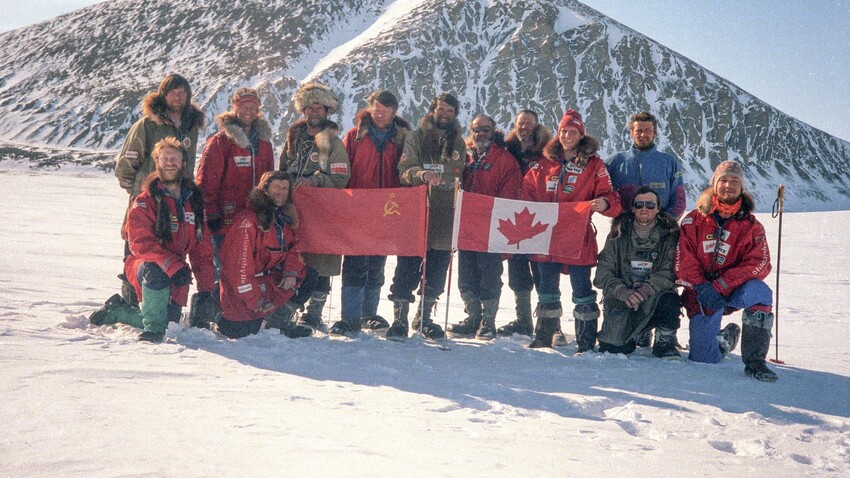 While preparations were underway in the Soviet Union, the Canadians got wind of the idea and liked it so much that they not only offered to join the expedition, but also to make it even more challenging. They wanted the group to cross the North Pole and then ski further to Canada. The Soviet skiers accepted the challenge. 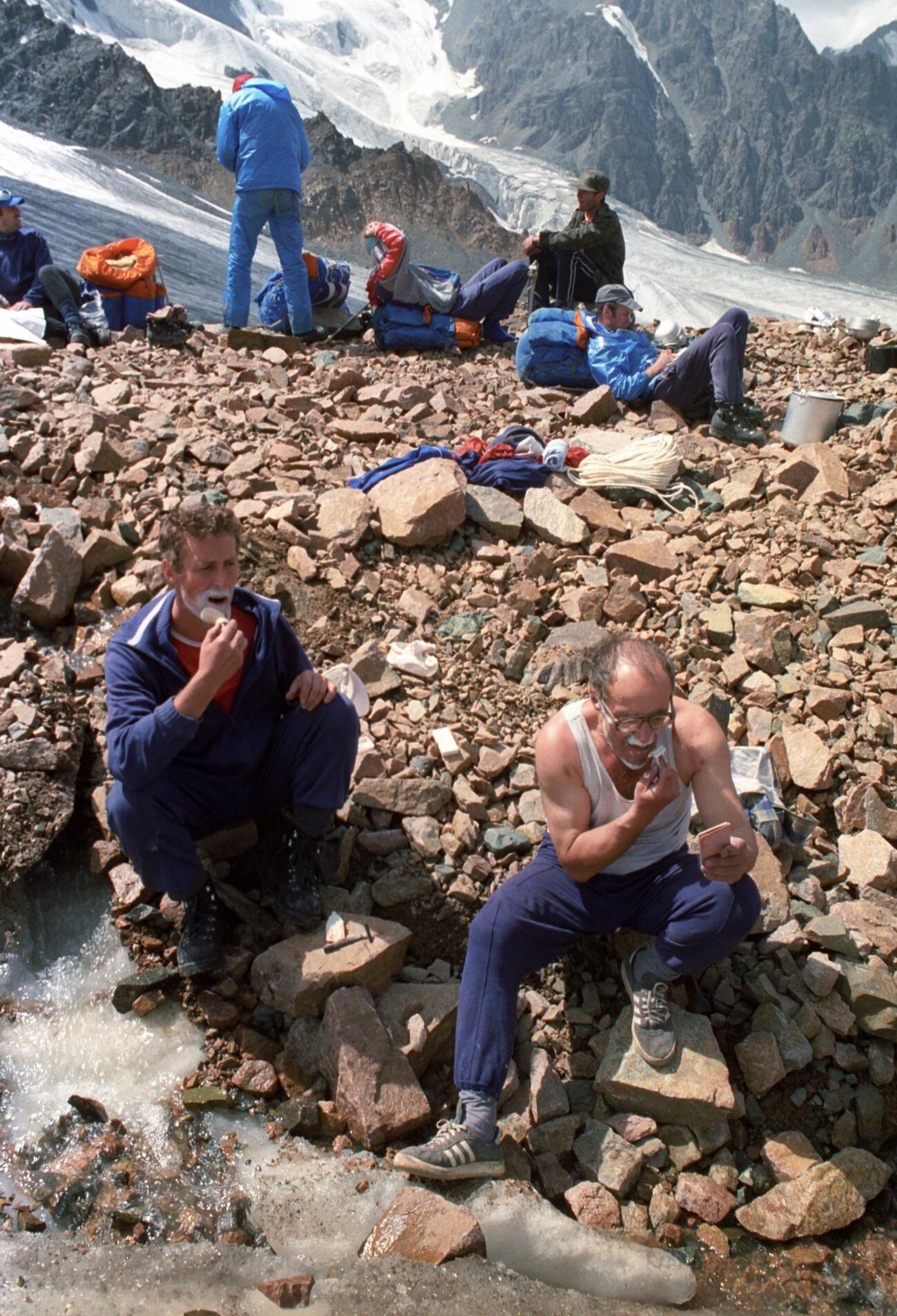 On March 3, 1988, a small team of eight Soviet and four Canadian men set out on the dangerous expedition. Each of them had a different set of expertise vital to the success of the risky mission. They were professional explorers, physicians, researchers, radio operators and photographers. There was even an artist who came as a member of the Soviet half of the team.

For months that followed, representatives of two hostile ideologies, united in their love for adventures, worked together to endure the severity of the environment and relied on each other not only for the success of their expedition, but for their very survival. Given the severe conditions, their survival was at risk. 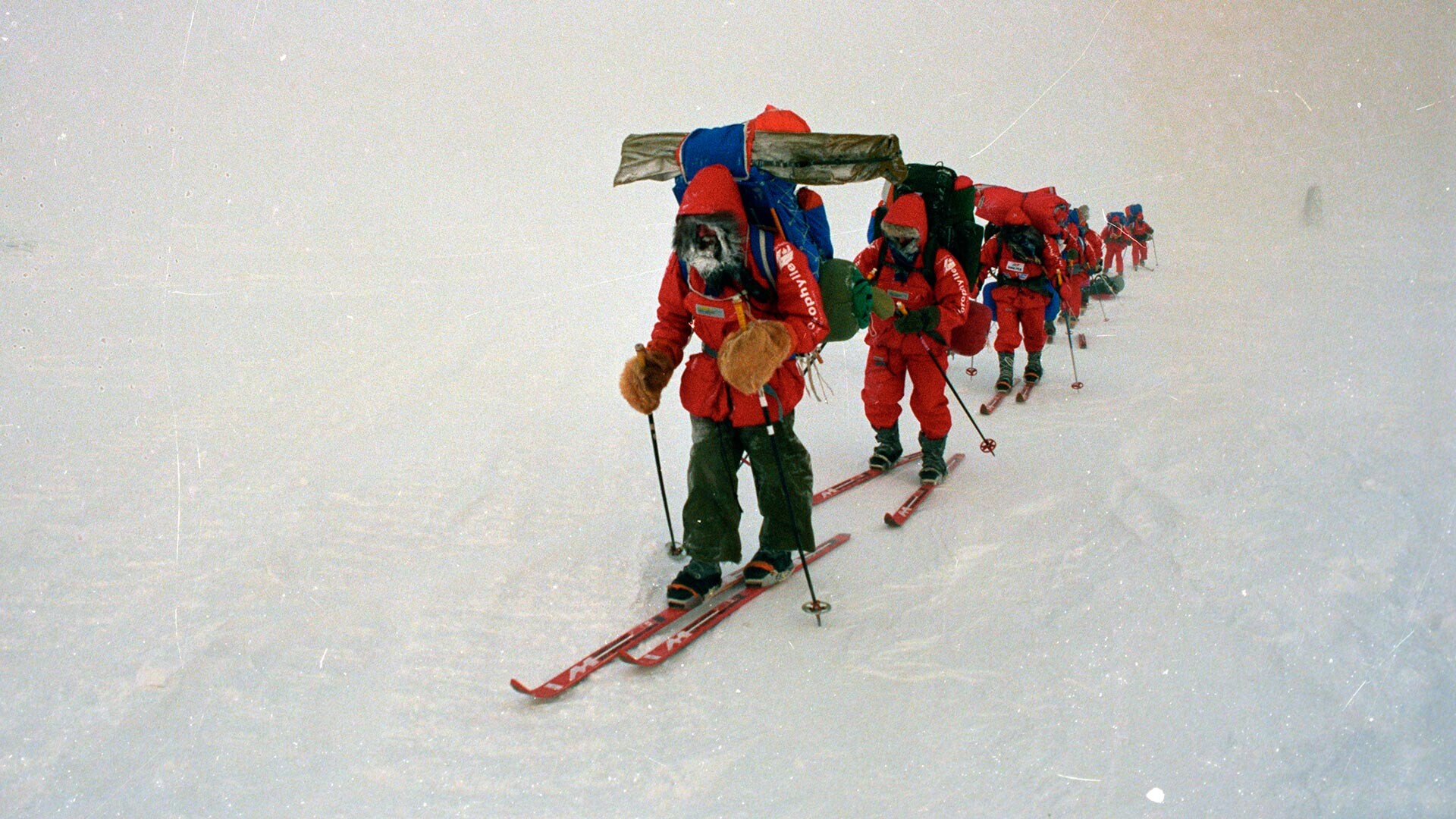 It was clear from the beginning that the journey would not be a walk in the park. The start of the expedition was delayed by two days, due to severe weather conditions that prevented an airplane carrying the explorers from taking off from Sredniy Island in the Arctic Ocean.

When the Soviet-Canadian team finally set out, they were shocked by what was awaiting them on the unwelcoming uninhabited territory of the Arctic. The temperature was -47°C and it was pitch-dark, as the polar night had not subsided yet. 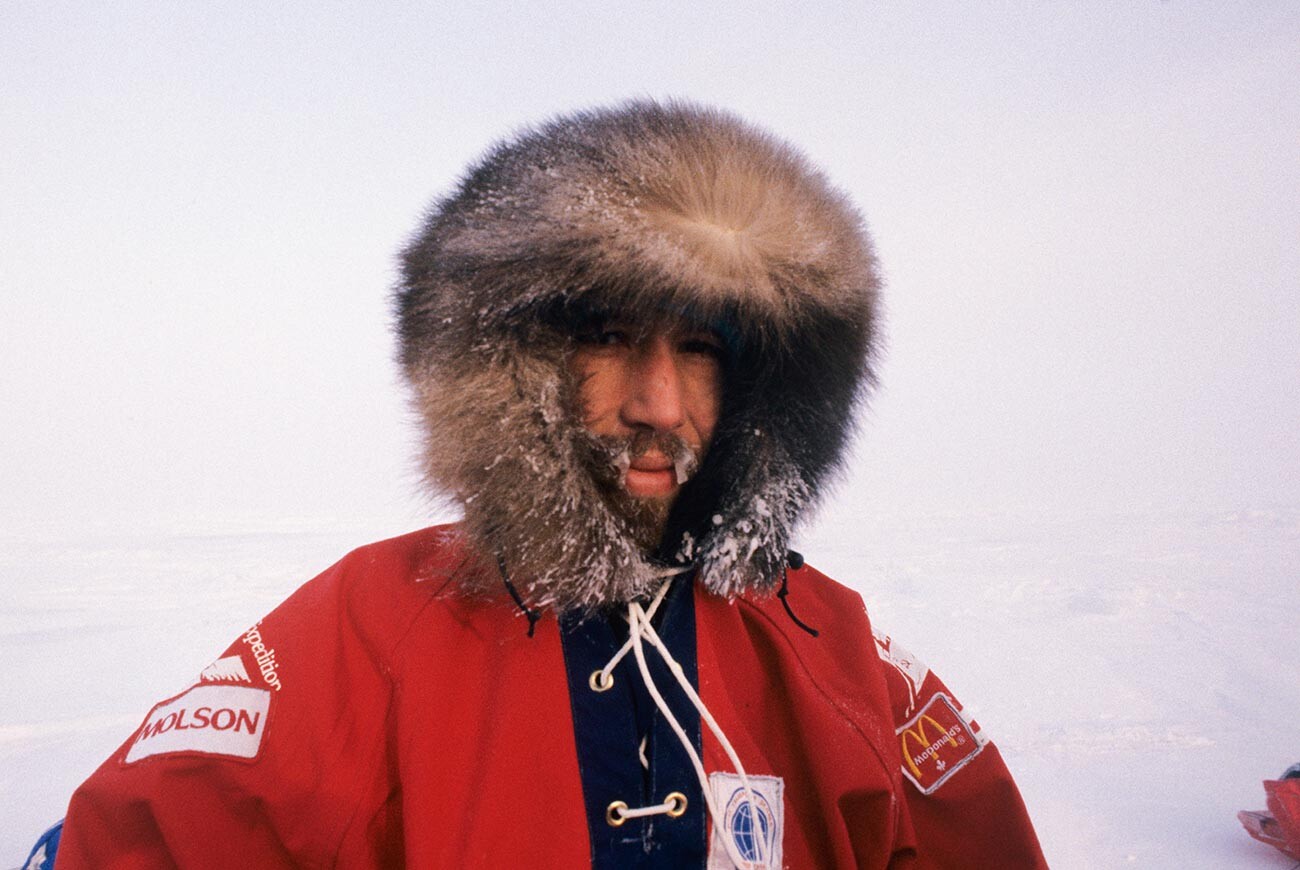 “Frostbite scarring most faces. Toes and fingers permanently numb and painful even when warm. A skier has blisters on his feet and is taking medication for them [sic],” read the very first message the group had sent from the trek to the mainland.

Under the severe weather conditions, the main problem for the skiers was moisture, since it was impossible to dry clothes and boots soaked with sweat. 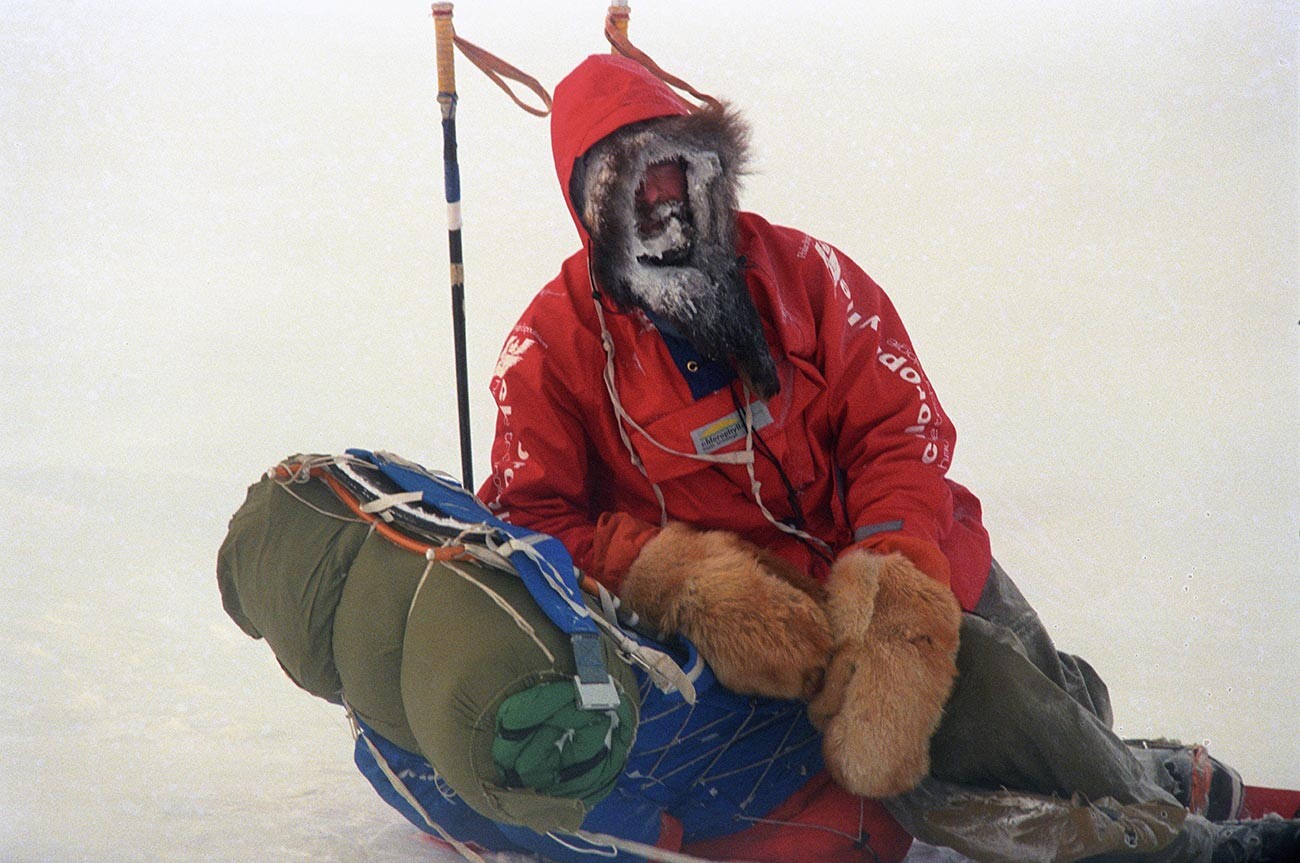 “Moisture is a big problem in tents, clothing and boots. No chance of drying clothes that are not being worn as they freeze instantly when taken off. Richard (Weber) and Christopher (Holloway) have slept outside every night to avoid condensation from the tent with the success of perfect igloo building skills,” read the message. 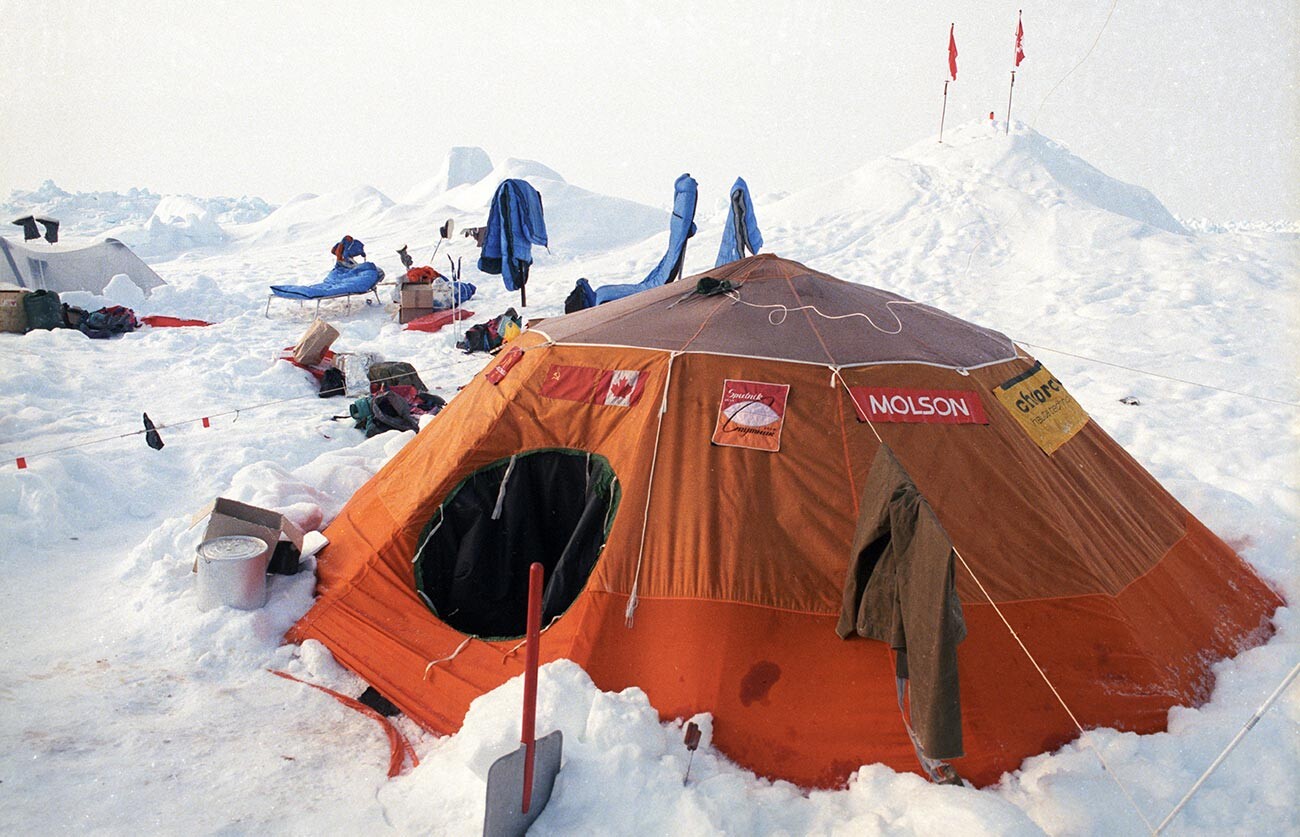 The group dried clothes in igloos they built specifically for the purpose.

The explorers had no support in the form of sled dogs or vehicles. Eleven airdrops with food, supplies and spare skis were everything they got along the 1,090 miles (1,750 kilometers) of the journey. In between the airdrops, the Soviet and Canadian skiers relied on each other for help. 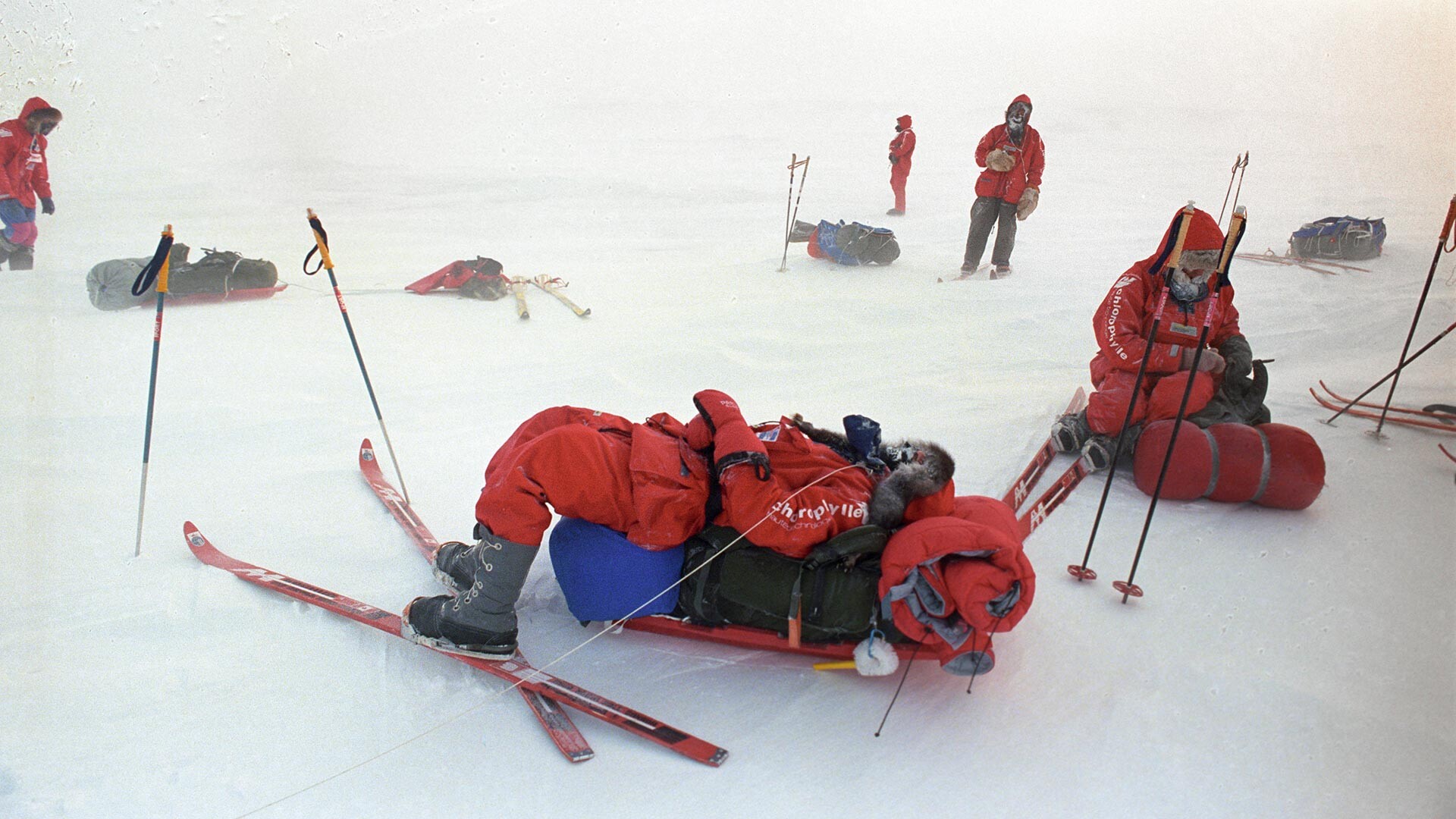 Messages passed over the radio in the course of the expedition highlight moments of mutual assistance:

“Three pairs of Russian skis broken and we will replace them with Canadian.” 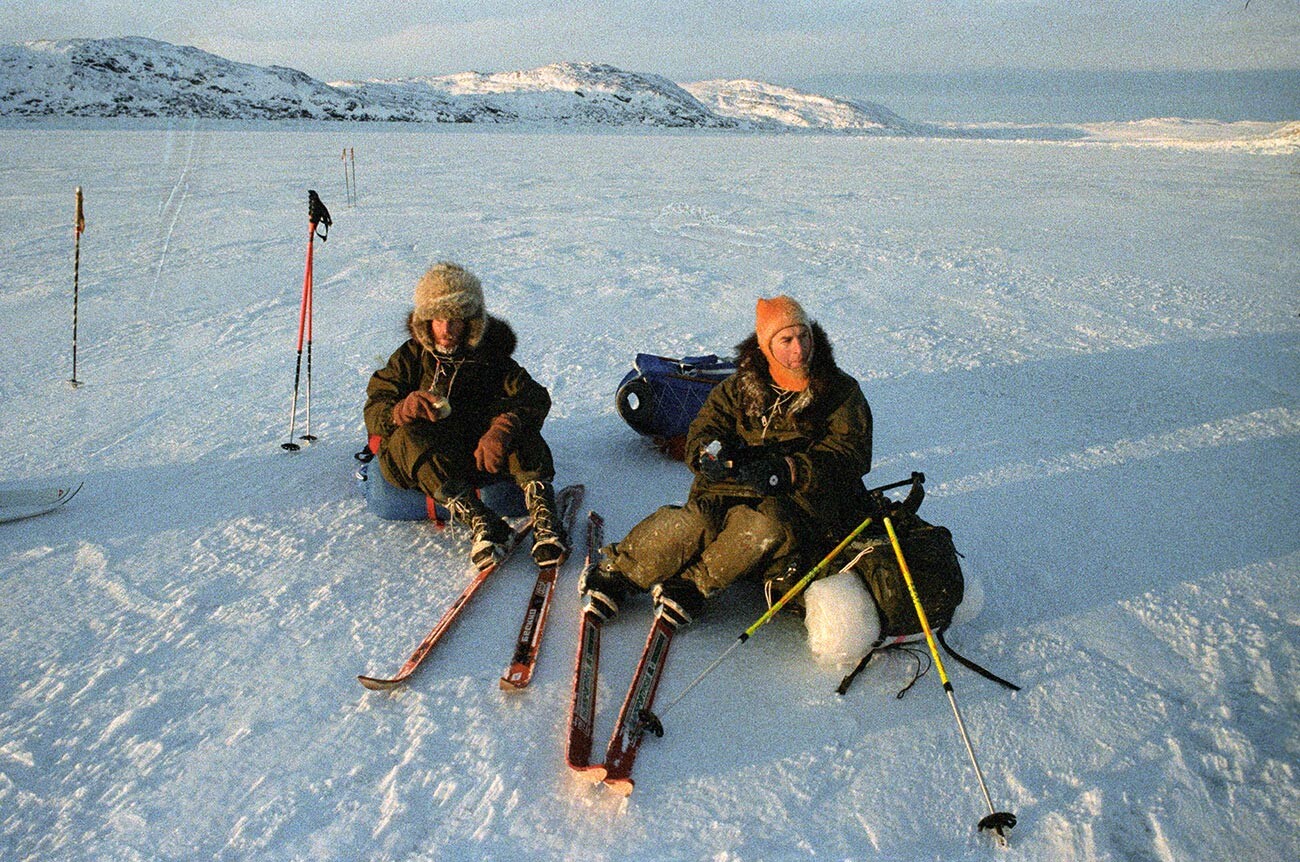 On one occasion, Canadian members of the expedition described the Soviet reaction to peanut butter.

“We have found peanut butter to be one of the Arctic’s best traveling foods. We receive it in frozen lumps of 100 grams. The plan was originally for 50 grams per man per day, but it is so popular we are increasing it to 100 grams daily. The Soviets were unfamiliar with peanut butter and, at first, somewhat suspicious, but have taken to it with vigor,” read the message.

The North Pole and beyond

The adventurers divided the route into stages. Each stage was two- or three-hundred kilometers long and required around a dozen days of skiing to complete. 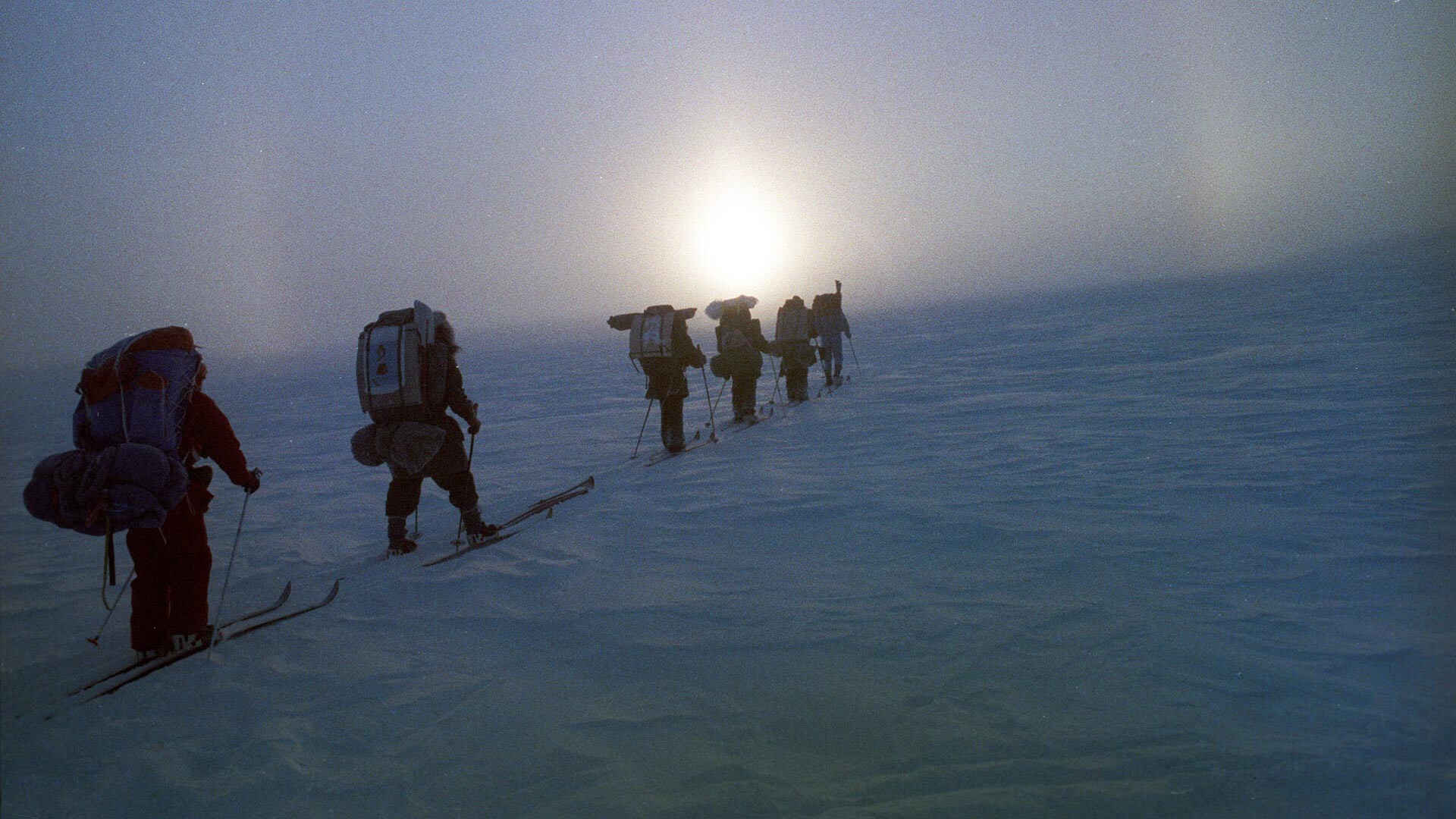 As the expedition progressed, the travelers successfully adapted to extreme conditions.

“The weather has warmed from a bone-chilling -48 degrees Celsius to the present balmy -25 degrees. Many of our initial injuries attributable to cold and inexperience are resolving and we are learning to live and work together more efficiently as a traveling group. On the map, our efficiency improved. In our tents and in our minds, the mood has shifted from apprehension, somber eternalization and concern with survival to optimization, conviviality and a sense of accomplishment,” read one of the group’s messages to the outside world. 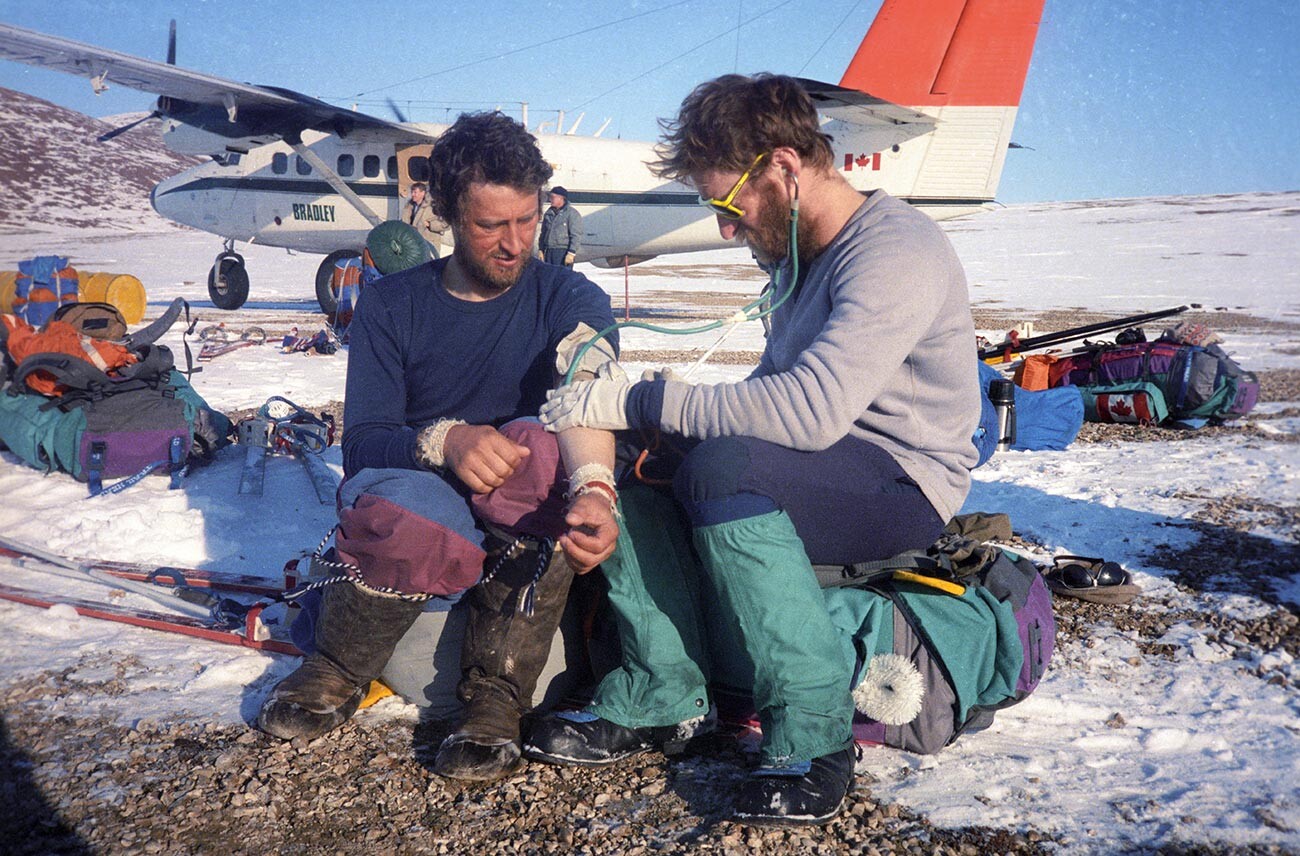 The expedition finally reached the North Pole on April 26, 1988, where they were met by officials from both Canada and the USSR, a group of journalists and some radio amateurs, who assisted the group in radio communication during the expedition.

To celebrate the occasion of reaching the North pole, an airdrop containing champagne and caviar was performed. 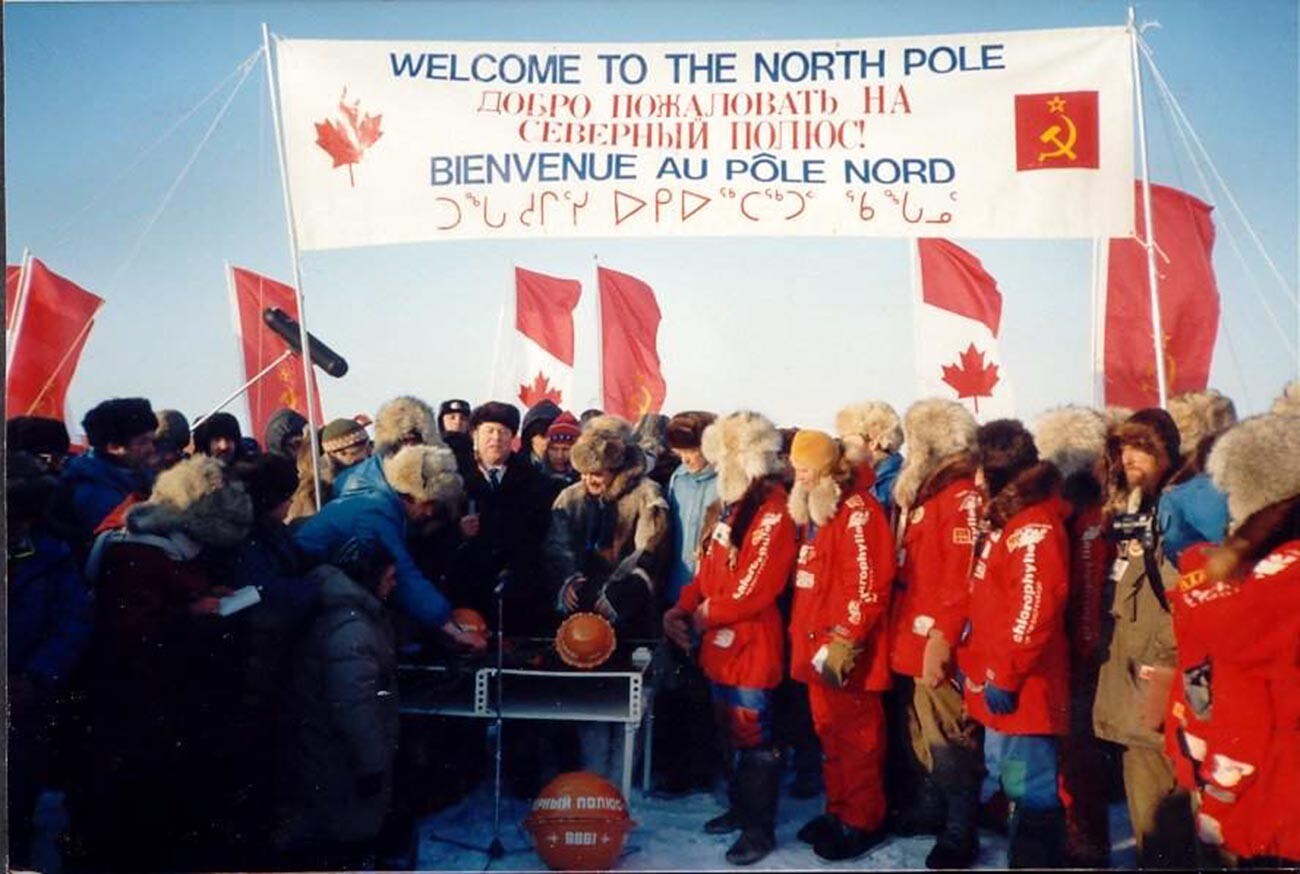 After the welcoming party at the North Pole, the skiers parted ways with the officials and journalists and set on a course to cover the remaining 750 kilometers to Canada’s Ellesmere Island, their final destination.

As the expedition was nearing the end, the spirit of the group members was elevated. They were no longer looking into horrendous challenges full of deadly traps, but into the glory that the successful end of the expedition promised.

The Soviet-Canadian 1988 Polar Bridge Expedition finished on June 1, 1988, when the whole party stepped on Canadian soil. One of the most dangerous, but also inspiring geographical expeditions of the 20th century had been completed.

Click here to find out about the Soviet women’s ski expedition to the South Pole.