5 ways children made money in the USSR 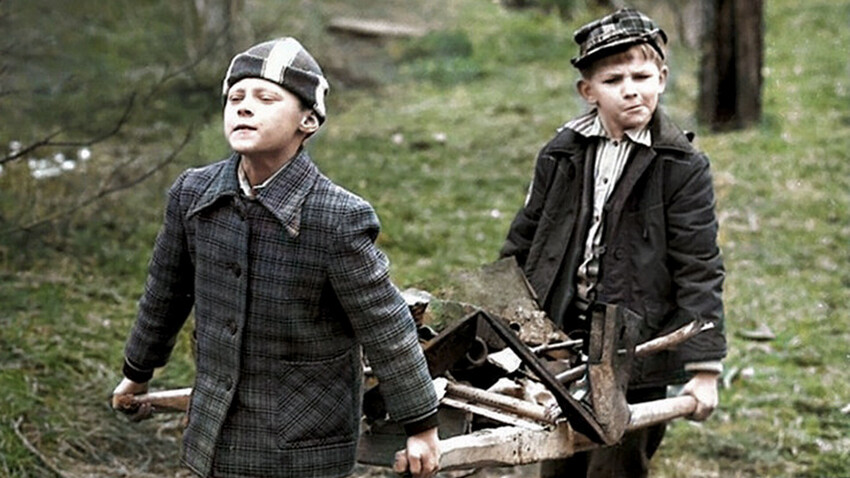 According to the law, children under 14 in the USSR weren’t allowed to work. But what lengths a teenager wouldn’t go to have his own pocket money! 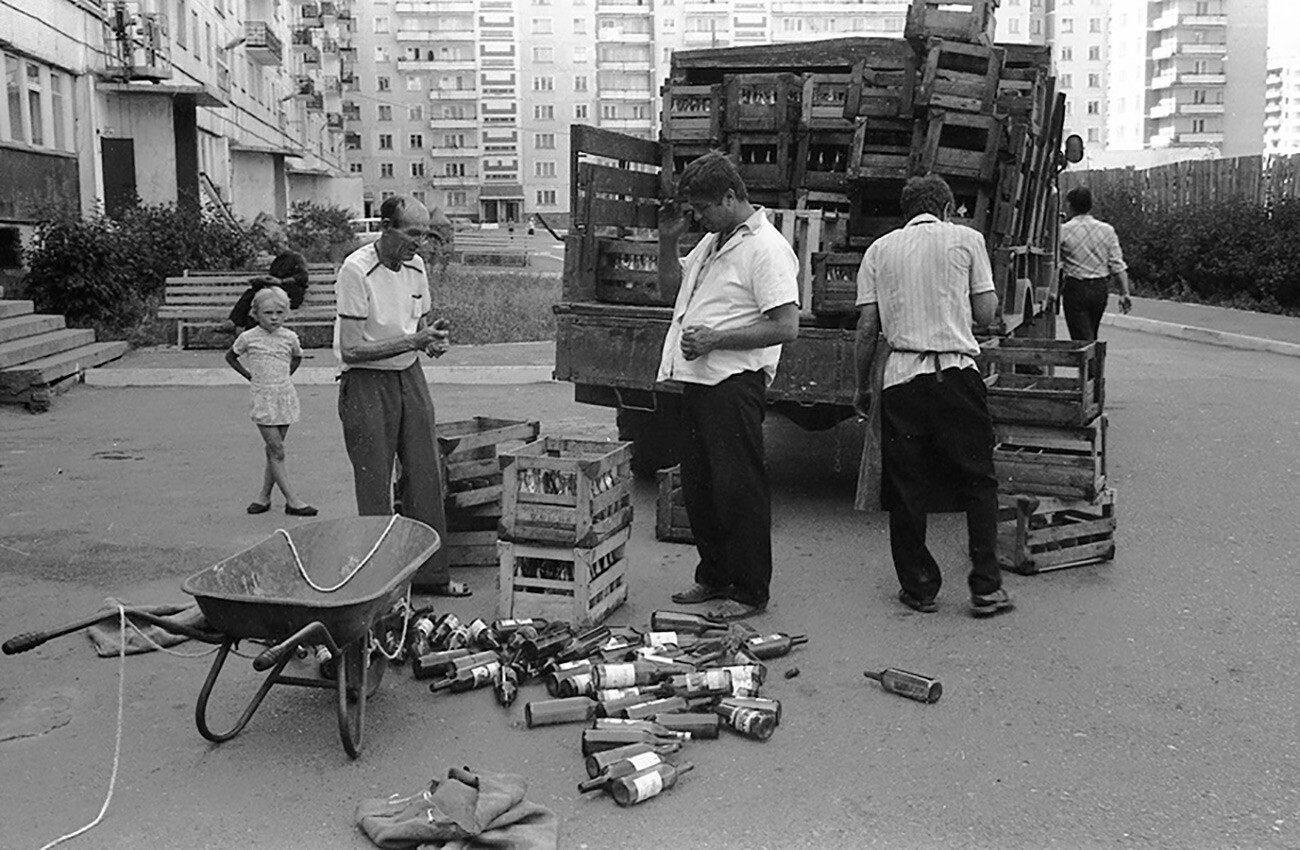 Recycling glass bottles was the first thing that came to mind for Soviet children. There were recycling points in every city district that paid 12 kopeks (0.12 rubles) for standard 0.5 liter beer and lemonade bottles, 15 kopeks for milk bottles and 17 kopeks for 0.7 liter wine bottles. An ice cream cup or cone could cost from 7 to 28 kopeks, so collecting glass bottles could be a profitable gig. However, some glass recycling points didn’t accept bottles from underage children. Yet, there were other ways for kids to make a quick ruble, especially in summer. 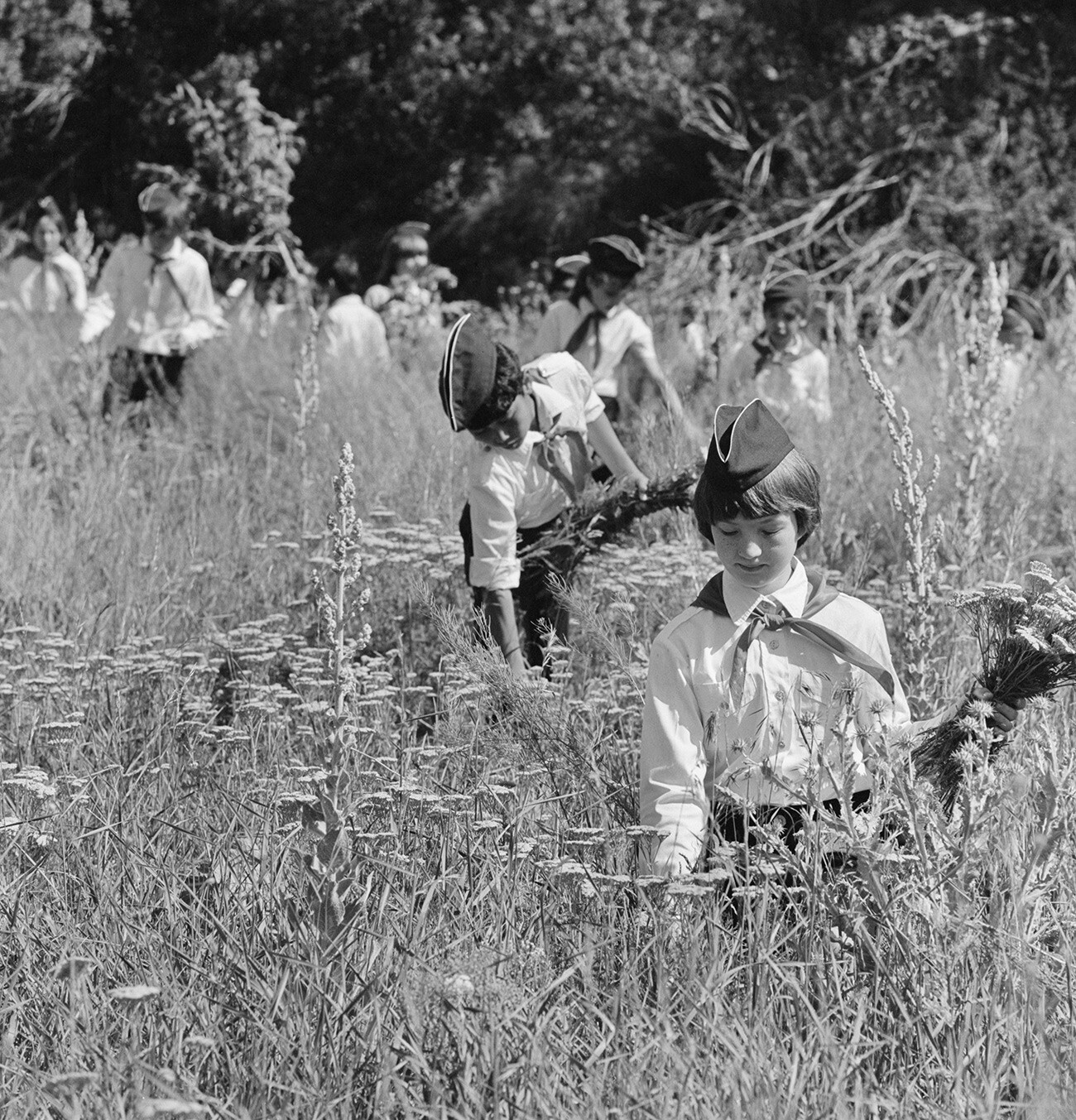 Soviet pharmacies (“аптека”, ‘apothecary’, as they are called in Russia) were responsible for collecting certain amounts of medicinal herbs that grow in the wild in Russia. Plantain, nettles, coltsfoot, camomile, dandelions, hawthorn, as well as more complicated hypericum or yarrows and much more – were accepted in pharmaceuticals all over the USSR and the drugstores paid real money for the herbs.

“Our pharmacies accepted the medicinal herbs we collected without asking about the place of collection or our age. They were taken from 5-6 year olds, as well as from 50-60 year olds. The package was weighed and the transaction took place immediately on the spot,” a woman with the online moniker ‘zlatka’ remembers. “A bag full of plantains earned you 11 kopeks, which was the price of a sweet shortbread cake. Collecting a bag took about half an hour of picking.” Collecting herbs was done by both girls and boys, but boys had extra ways of earning money – through physical labor. 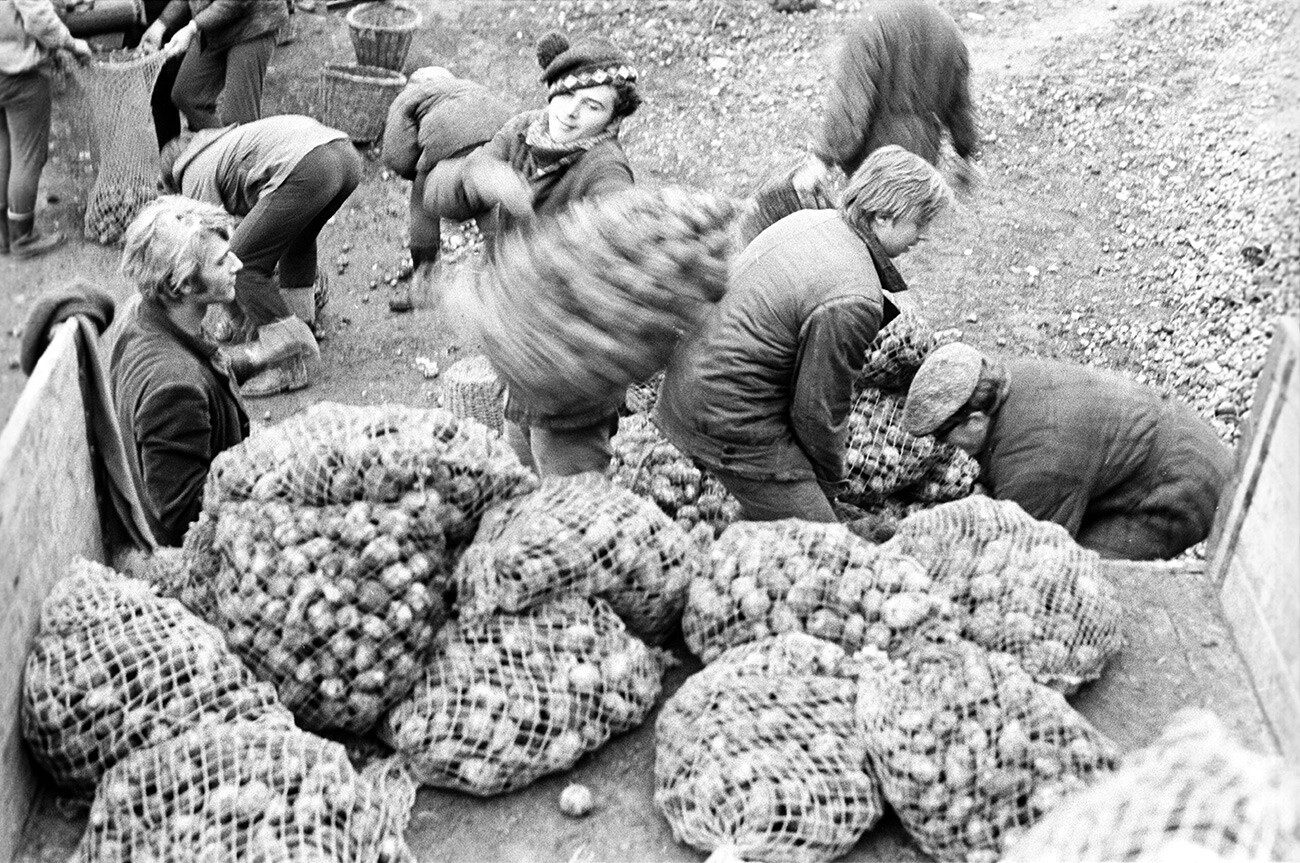 “I earned my first money with my friends, helping residents to settle in the new buildings. No one trusted us with large furniture, of course. But all sorts of chairs, bedside tables, bags and boxes were ours. Taking into account that elevators were often not launched in the new houses yet, the tenants saved a lot of effort. And it was good for us – we received a ruble per nose in less than an hour,” ‘Adumus’ remembers.

Sometimes, the most unusual tasks popped up when Soviet boys were looking for a summer job. “It was the mid-1980s and I was fourteen as me and my buddies went to every office in our city [and asked]: ‘Is there any work for teenagers for the summer?’ And [one office] sent us to a forest to cut down shrubs along fire glades. In the morning, about 20 people gathered, loaded into a truck (an open side body, without any seats or seat belts, now this is impossible to imagine) and with a woman foreman we were taken into the woods. There, we cut the bushes with axes, then they drove us back. In a couple of weeks, I received about 40 rubles, I remember I bought myself cool, brand new ski boots with fasteners,” another person online remembers.

Unloading train cars and trucks with watermelons, apples, potatoes. Hammering boxes or helping carry tires and car wheels at the tire service. Washing cars at the car park. In the countryside, loading and unloading hay, helping the grown-ups as a shepherd boy or enrolling in the brigades that worked at the Soviet collective farms – even those who came to the countryside for a vacation could do this. All of this was formally illegal, but working hand shortages often occurred in the USSR and children were there to help while landing a few rubles in their pockets. 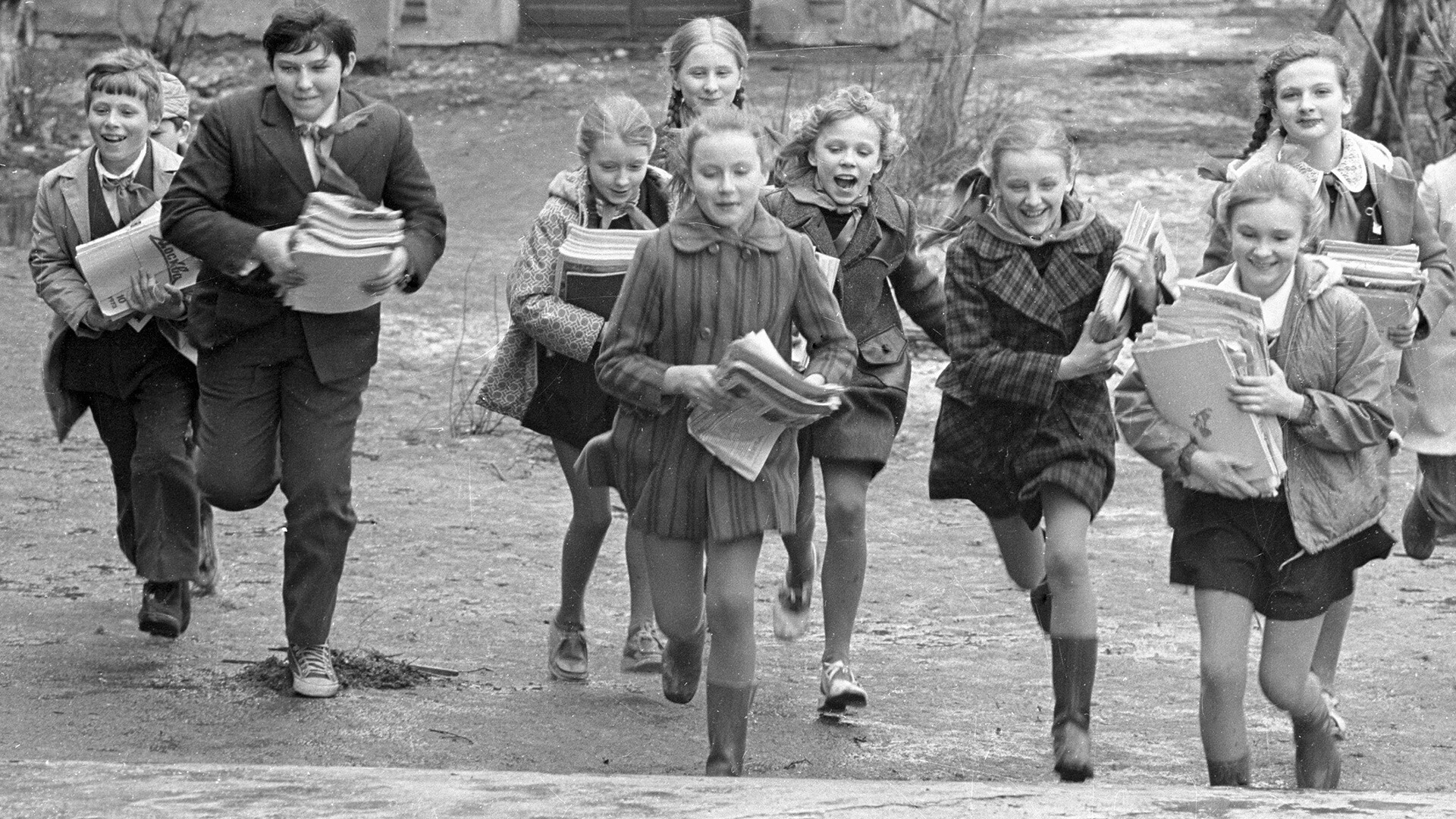 Collecting scrap paper for recycling was an ongoing, USSR-wide campaign since 1974, when shortage of paper started to show. Ads about recycling paper were placed in the back pages of many Soviet books, encouraging people to collect scrap paper and bring it to collecting points. “Recycle paper – save a tree” was the campaign’s slogan. But what about profits?

Twenty kilograms of paper earned you a coupon that you could exchange for rare books – Arthur Conan Doyle, Alexander Dumas, Jack London, Jules Verne, Mayne Reid. These books were not available in bookstores and were given out through special dispensaries. So the business scheme could be as such: collect plenty of paper to recycle, receive the coupons, exchange them for books and then discreetly sell books. Why discreetly – because it was already illegal trading. Of course, illegal activities were the most profitable – but also the most dangerous.

5. ‘Fartsovka’: illegal trade of everything 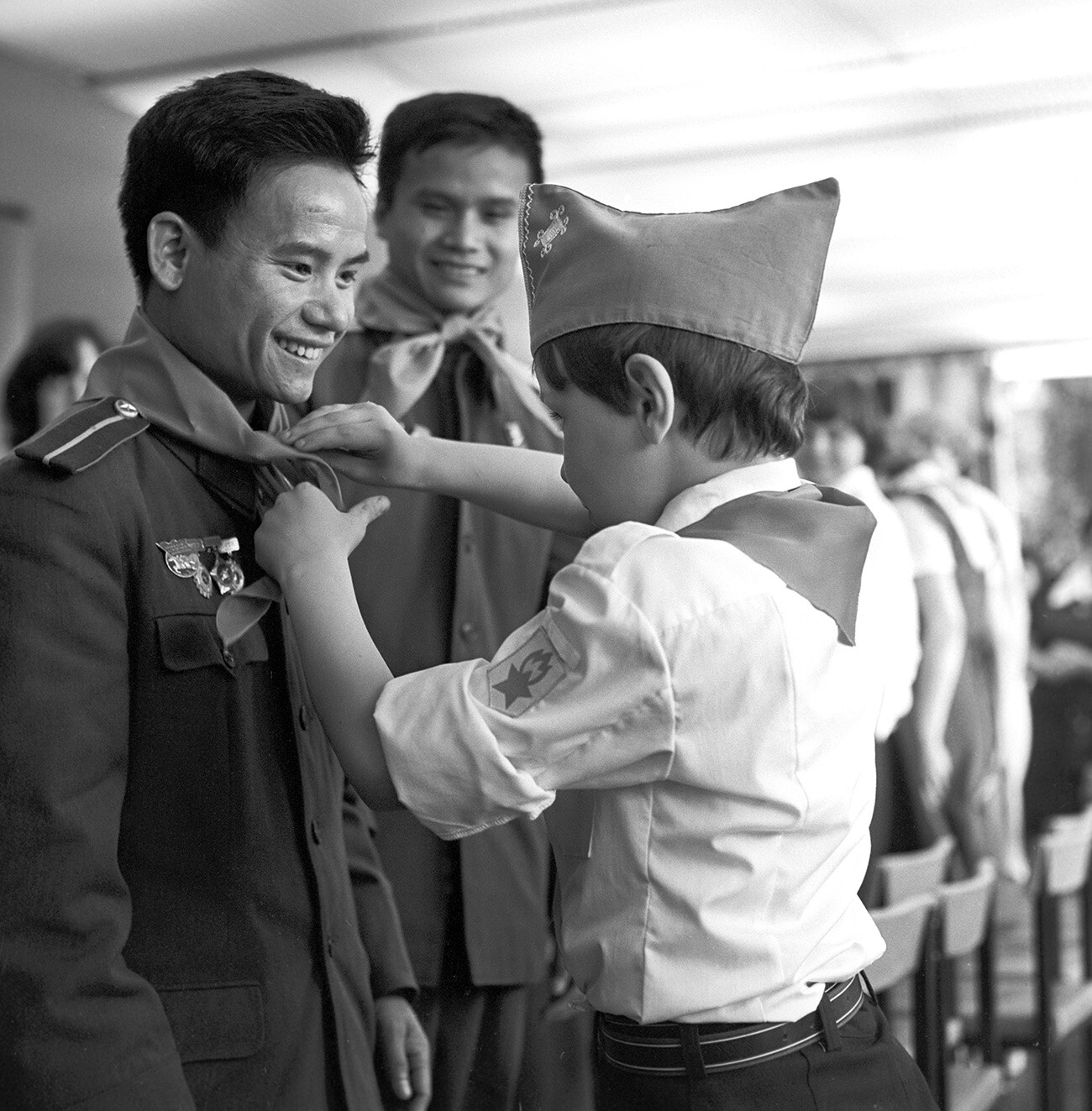 A neatly dressed boy or a modest girl would hardly be the first suspects for Soviet militia searching for criminals. Using their innocent looks, schoolchildren could trade with foreigners – in those rare places they could be found. The territory of VDNKh (Exhibition of Achievements of National Economy), a vast Moscow park northeast of the city center, was one of them; meanwhile, ‘Kosmos’ and other hotels there would host sports delegations from abroad.

Packing a few dozen cheap Soviet badges with Lenin, kids went to VDNKh and offered foreigners the badges in exchange for foreign cigarettes, bubble gum or whatever that later could be sold.

Arbat Street was another place where foreigners could be encountered. ‘ArizonaHills’ recalls: “Beginning of the 1990s. I’m about 17 and I’m selling ‘Komandirskie’ watches on Arbat, $25 each. They sold fast. But ‘Komandirskie’ weren’t available in stores, they were issued just for the army. [But] my father was a military counselor in the USSR and he could get me those watches as an officer.” 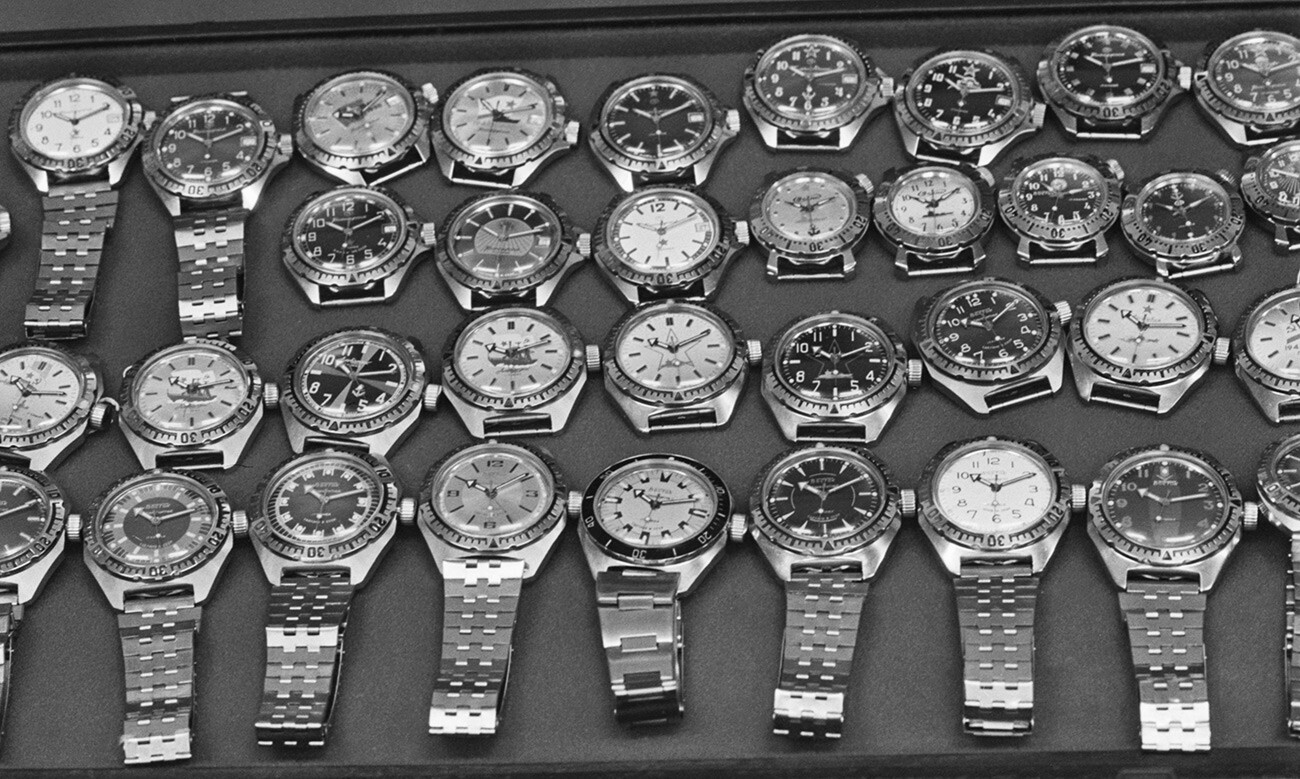 In the early 1990s, ‘Komandirskie’ wrist watches could cost 30-40 rubles and a dollar at the time was equal to roughly 120 rubles, so the guy was making enormous profit. Meanwhile, a pack of the most expensive available foreign brand cigarettes, like Camel or Marlboro, went for 12-15 rubles. But that was already grown-up stuff – in the USSR, illegal trading was a criminal offense and children already became responsible before the law from the age of 14 – the same age that they were allowed to work. So, trading watches and badges could land a young man in jail. But still, the temptation to get a glimpse of rich life was sometimes too strong.