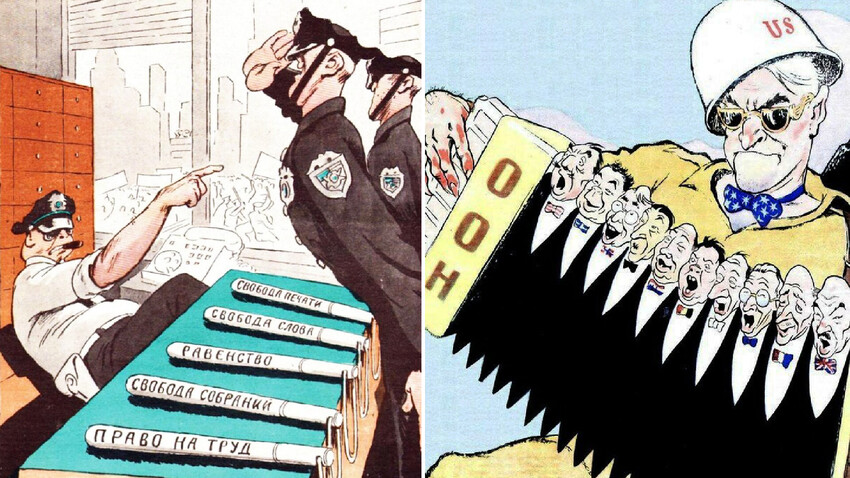 Public Domain
Legendary Soviet satirical magazine ‘Krokodil’ turns 100 in 2022. Throughout the years, it served as a propaganda tool of the Soviet authorities eager to ridicule and demonize the U.S. and its allies.

1. ‘Krokodil’ (‘crocodile’) magazine was the largest satirical publication in the USSR. It was published four times a year. At its peak, its circulation reached 6.5 million copies. The poster below depicts police clubs with inscriptions “freedom of press”, “freedom of speech”, “equality”, “freedom of assembly” and “the right to work”. The caption reads: “Sergeant, get the basic articles of our constitution into the heads of the demonstrators.” 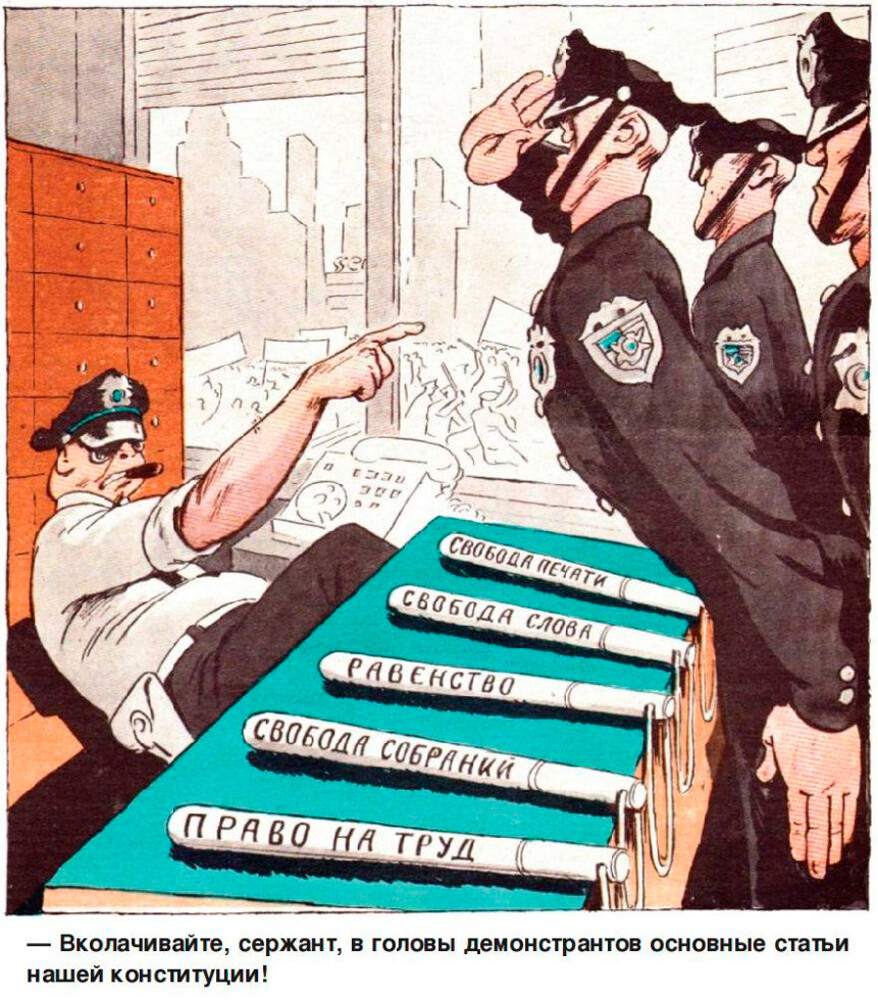 2. In the first years of the magazine’s existence, artists focused on criticizing the ideological enemies of the Soviet state. At the start of the World War II, the magazine focused on ridiculing the Nazi invaders. However, everything changed when World War II ended. For the magazine, the Cold War provided rich soil for creativity. The poster below depicts a huge line to a job fair in the U.S. and a sign saying: “No job”. 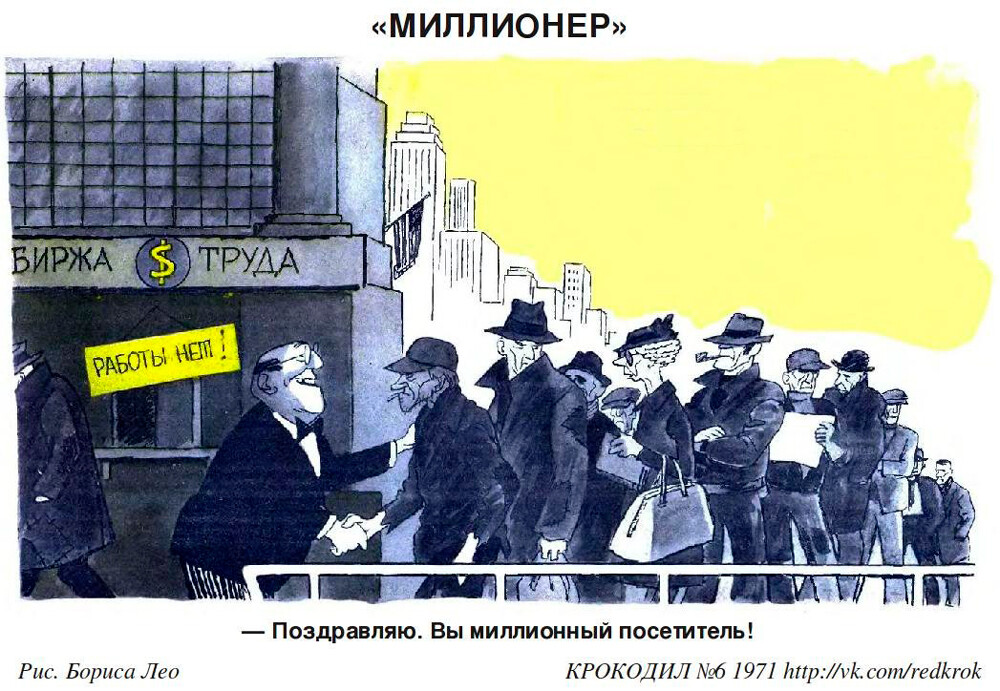 3. Articles in the Soviet magazine touched upon all spheres of life in the West, from the military to international and domestic politics to daily life. On the poster below, the magazine suggests the United Nations is nothing but a tool of the U.S. global influence. 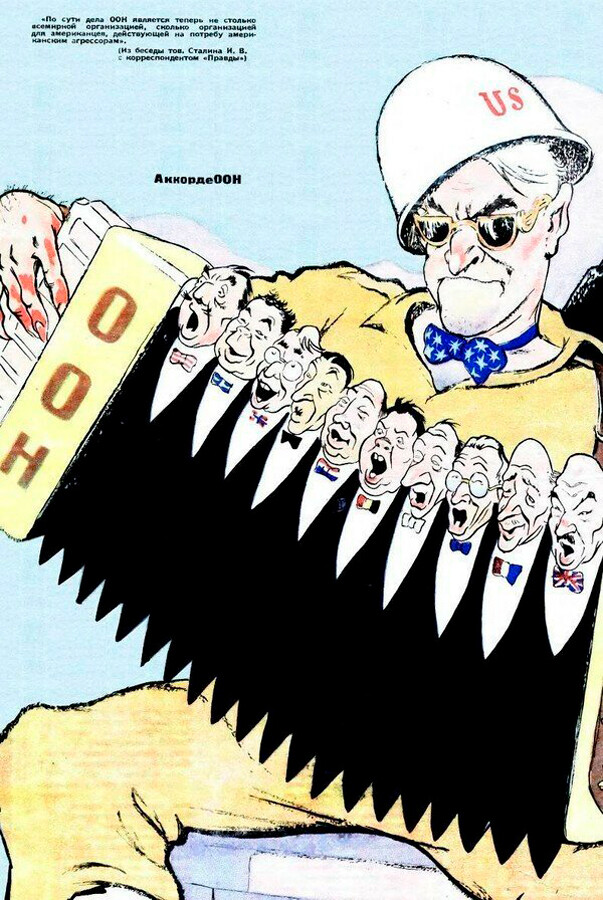 4. Often, the magazine lectured the Soviet readership on how inhuman life was beyond the Iron Curtain. This poster shows the youth indoctrinated with violence and vices allegedly broadcasted on American TV. This must have been a shock for the readers in the USSR as Soviet TV was strictly censored. 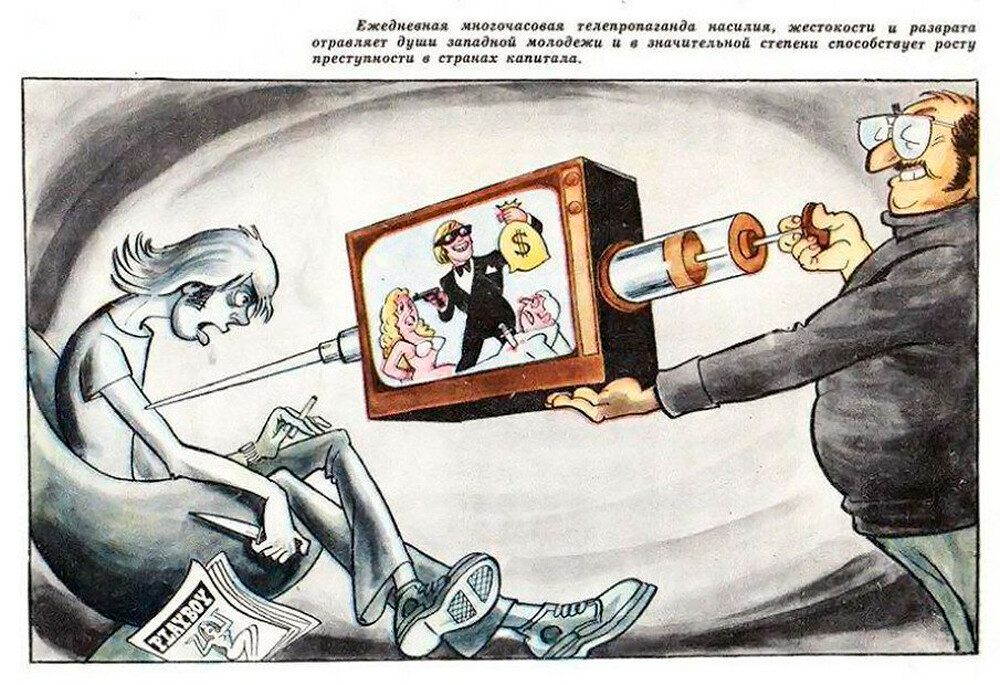 5. Quickly, the magazine became an effective propaganda tool used by the Soviet leadership to demonize the U.S. The poster below suggests the U.S. did not leave a choice to its West European allies as to when to use its weapons located there. The caption reads: “The decision to launch will be mutual…” 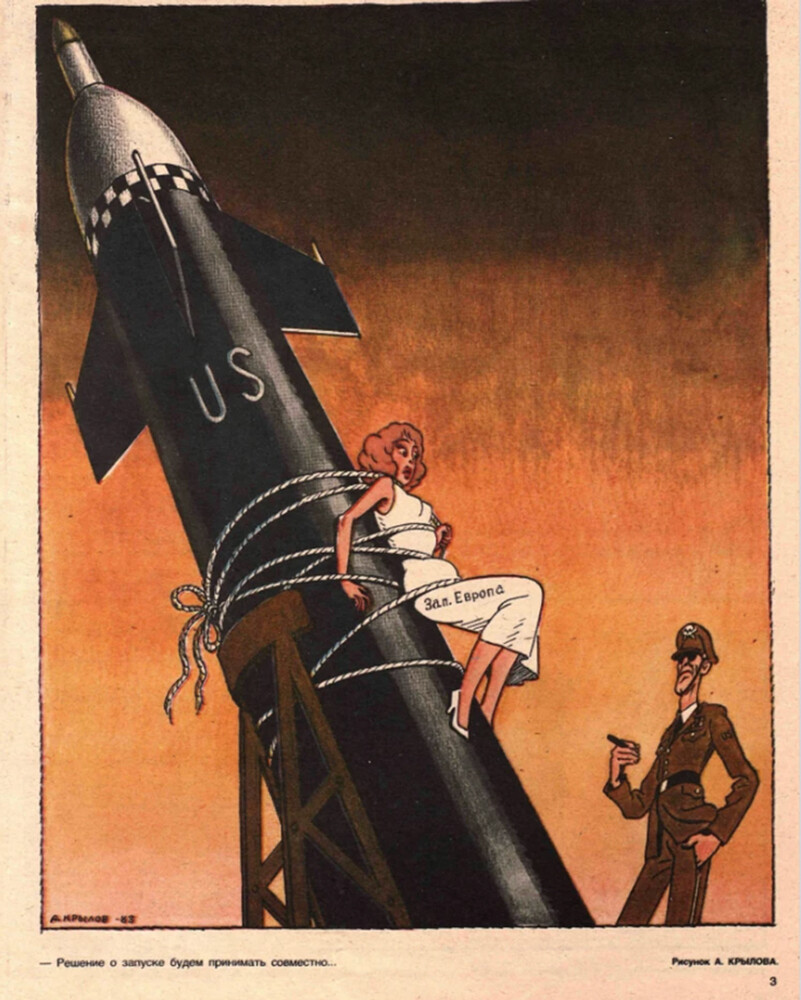 6. Many illustrations published in the magazine told Soviet readers that life in the West was unbearable. On the poster below, a family of Londoners heat their house by burning posters headlined “Laborer’s promises”, suggesting that the Western politicians did not do anything for the people they represented. 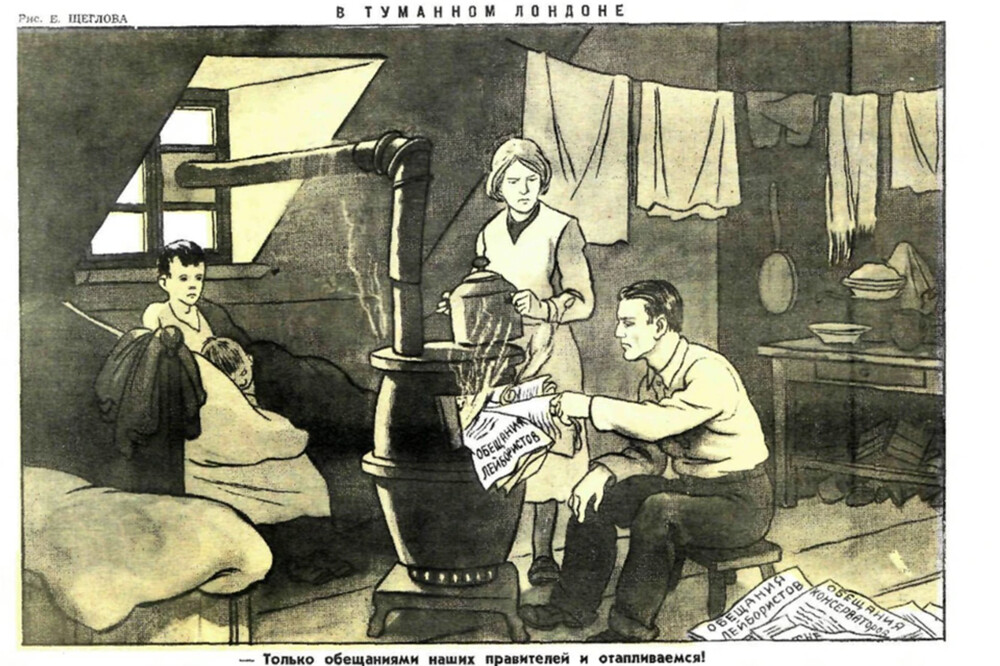 7. Naturally, the American government was also ridiculed. On the poster below, a U.S. citizen uses political posters sponsored by the Democrats to cover the holes in the walls of his house. The caption reads: “– The elections are over, why are you pinning these posters to the walls? – So that the wind does not blow through the cracks.” 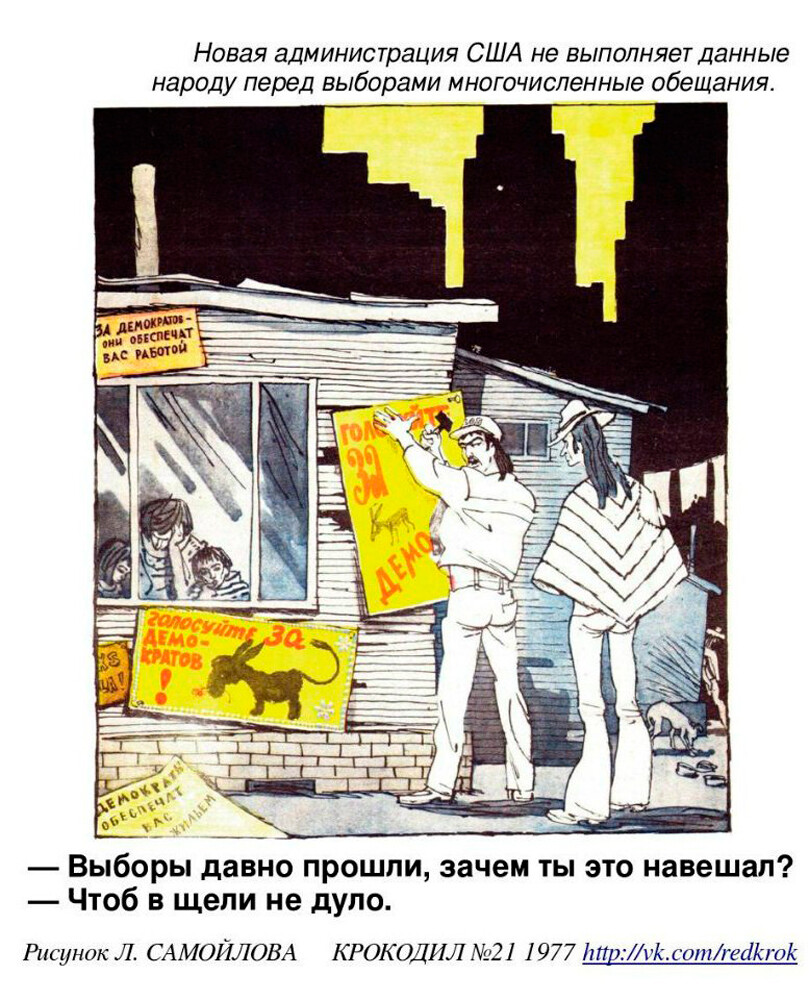 8. The publication suggested that political offices were up for sale in the U.S. This poster below shows a politician bragging to his fellow that he had just bought a ministerial position. 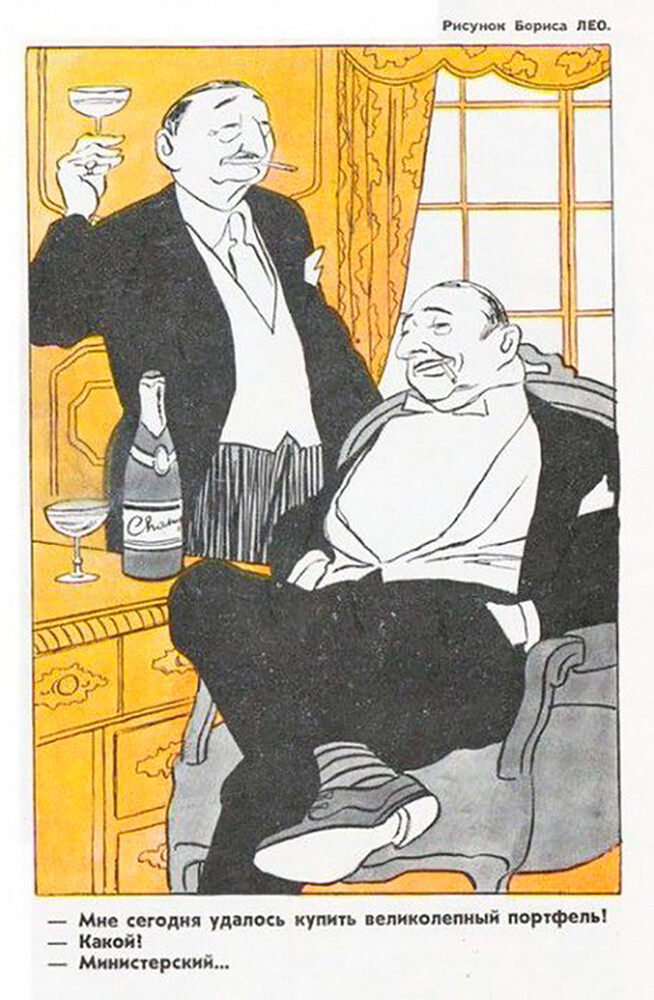 9. An alleged practice of using wealth to obtain high political offices in the U.S. was a recurring theme often exploited by the publication. The caption here reads: “– Can I count on winning the elections now? – Of course, Sir, after all, you have the makings of a true senator.” 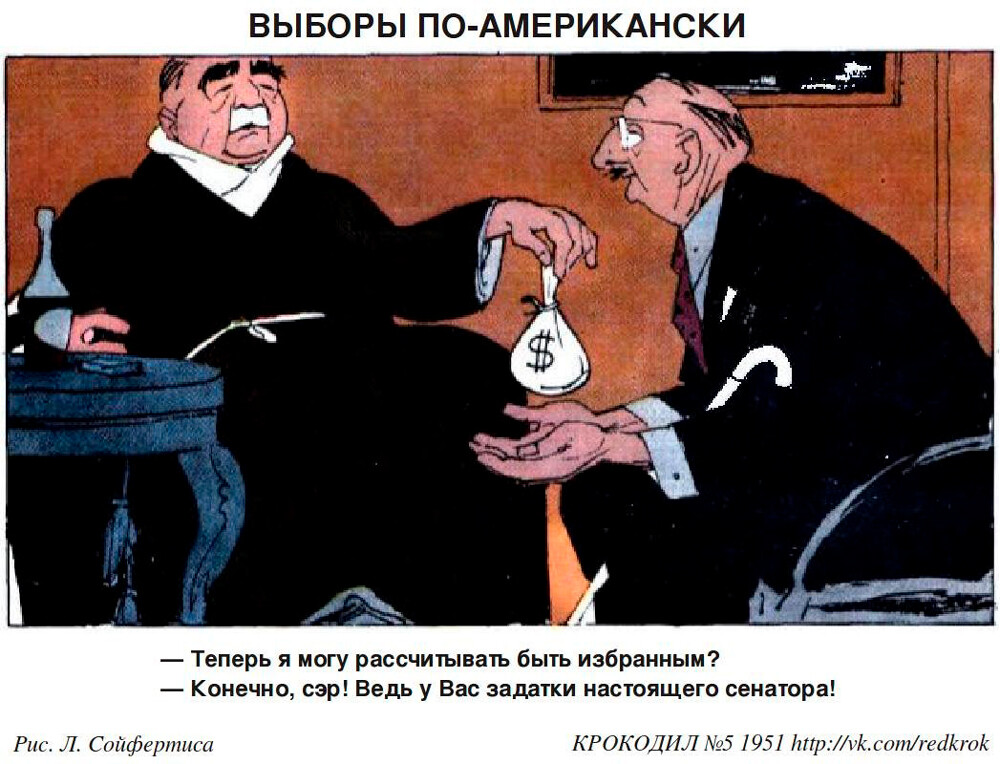 10. Since the USSR practiced the system of universal free healthcare, the satirical publication did not shy away from pointing out that, in the capitalist system, this basic human necessity came at a fee. The poster below depicts a doctor and a nurse preparing for a surgery. The caption uses wordplay to suggest that the doctor is not as interested in the patient’s condition as he is in his wealth. 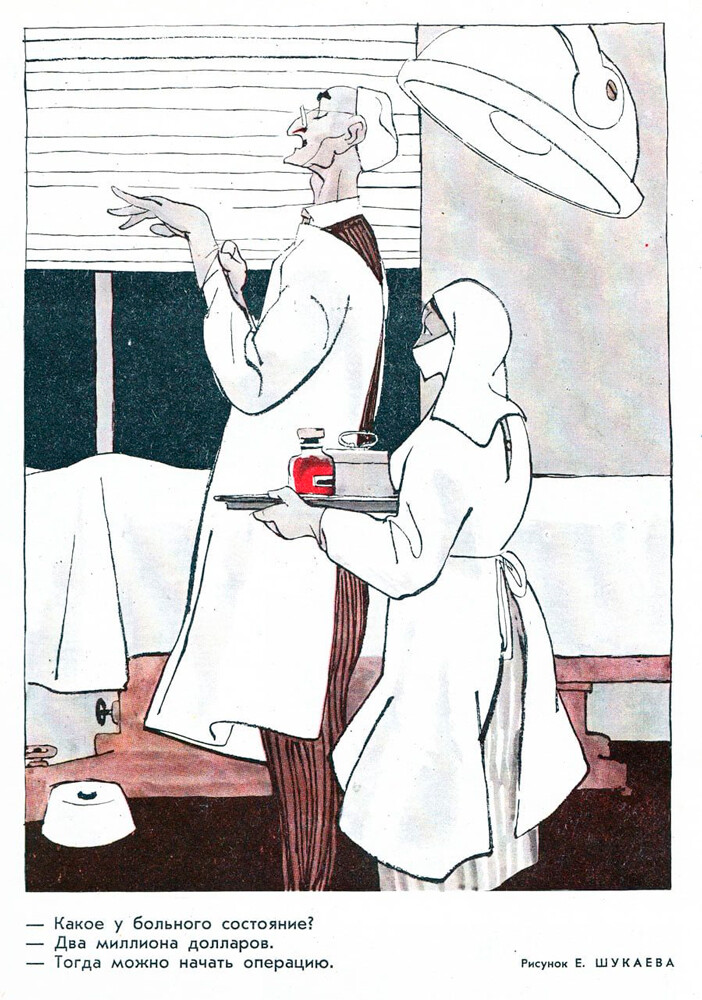