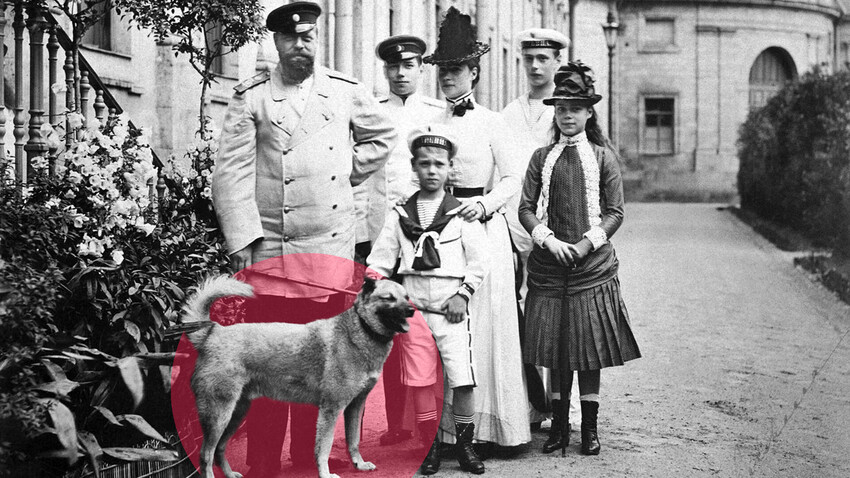 Public domain
Loyal friends, companions, keen listeners and sometimes literal saviors: all of these things are true when it comes to Peter the Great’s, Catherine II’s and other Russian rulers’ favorite pets. 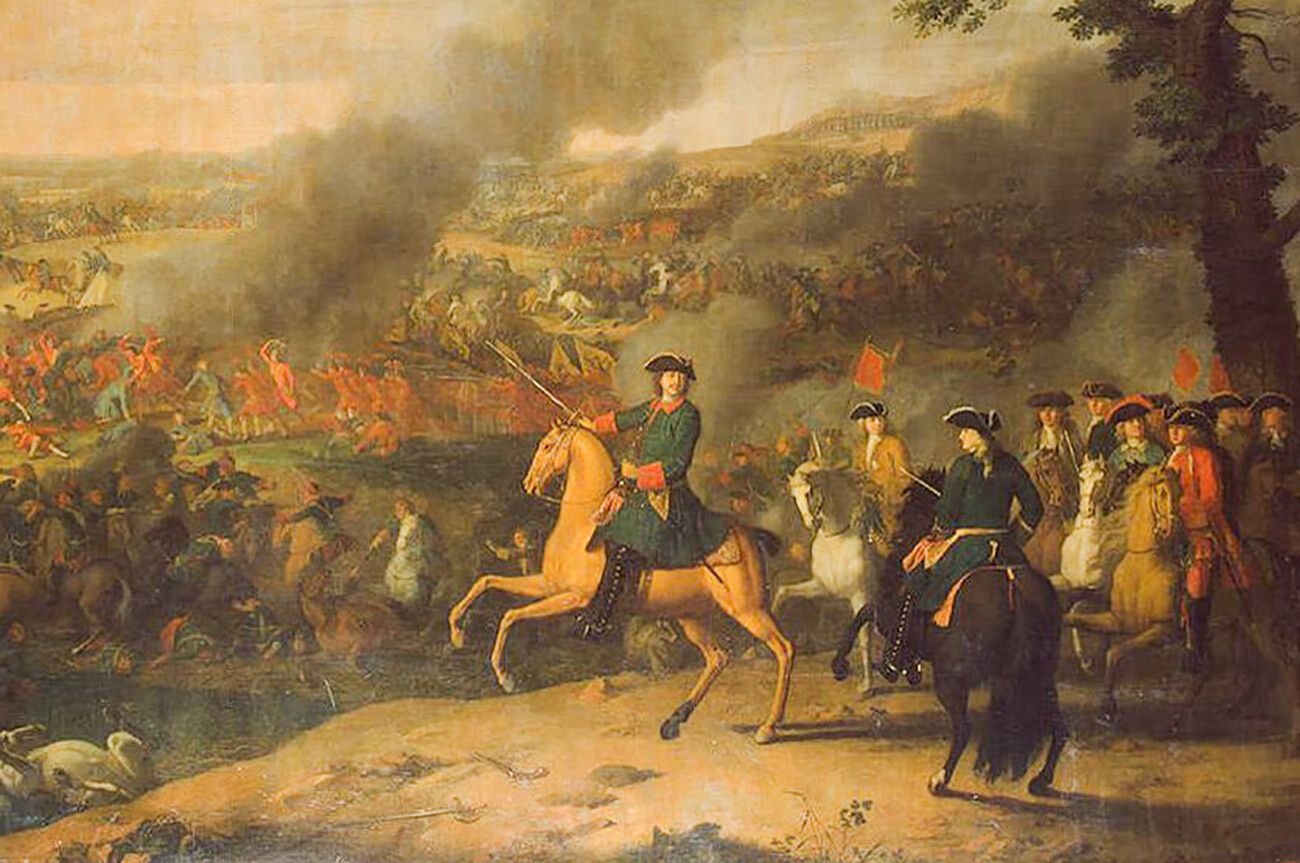 Louis Caravaque. Battle of Poltava in 1709. Tsar Peter I of Russia is shown on a horse.

On his way back from a diplomatic mission to Europe, on the outskirts of Riga, Peter I came upon some merchants, leading a horse of the Karabach breed. It was love at first sight for the Russian emperor: he offered his own steed and an additional 100 Dutch gold coins on top for the horse. He didn’t think long about what to name the horse - Lisetta. It’s believed that the name belonged to one of the women that shared his bed. The purchase easily justified itself. The horse was given to the emperor and only recognized him as master. 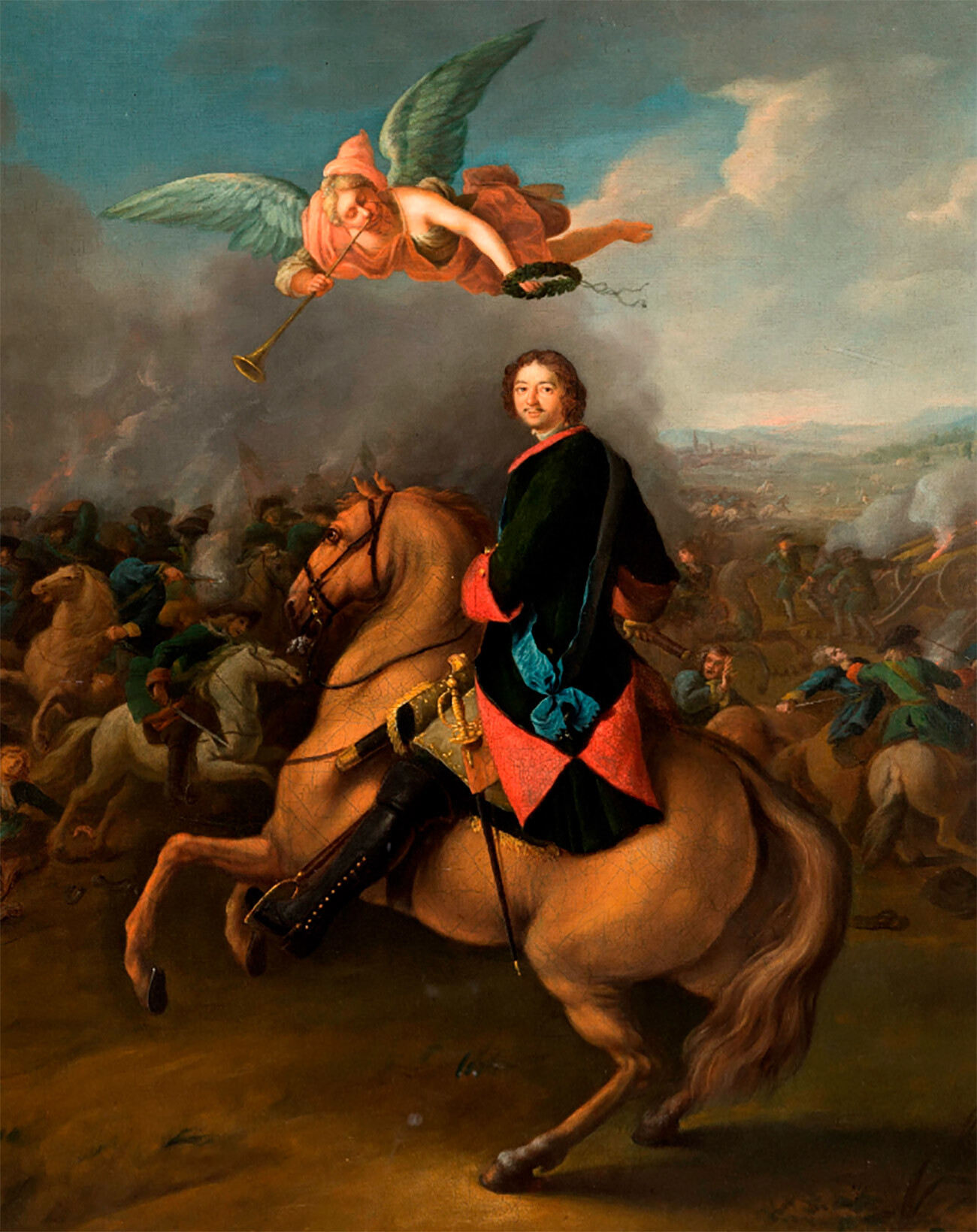 Johann Gottfried Tannauer. Peter I at the Battle of Poltava

Peter and Lisetta fought in the Northern War and the Persian Campaign, among others. Meanwhile, during the Battle of Poltava, Lisetta allegedly saved her master’s life: when the Swedes began firing on Peter, Lisetta pivoted to the side and the bullets only managed to hit the saddle and the emperor’s hat. 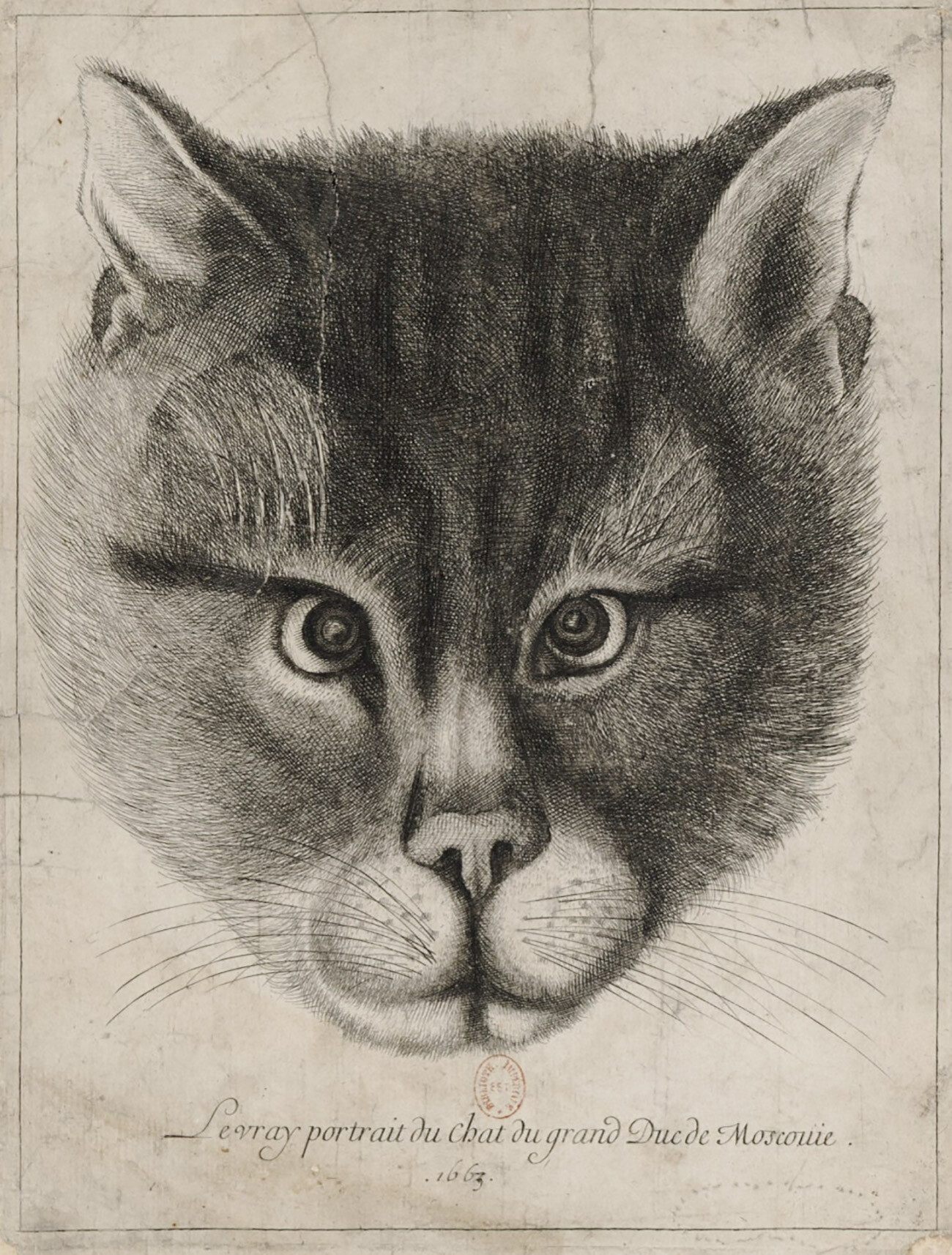 Vaclav Hollar. The Image of the Cat of the Grand Prince of Moscovia

The Romanov Royal Court always had plenty of animals - some even tasked with performing serious roles. For instance, Tsar Aleksey Mikhailovich’s cat was there to hunt and eliminate the palace’s numerous rodents. And he was so good at his job that they even painted a portrait of him: in 1863, ‘The Image of the Cat of the Grand Prince of Moscovia’ was presented by Czech artist Vaclav Hollar. 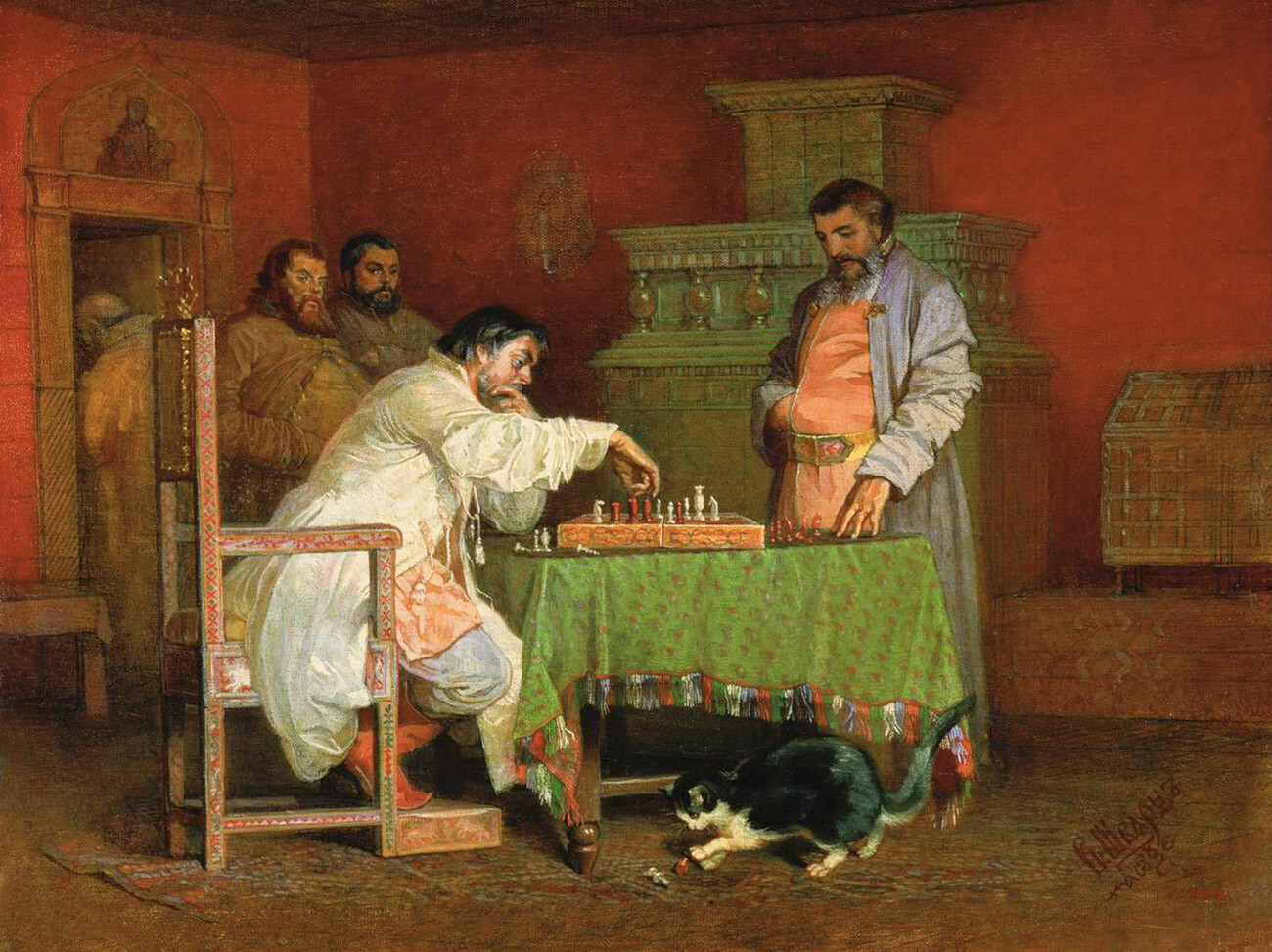 Vyacheslav Schwarz. Scene From the Life of Russian Tsars (a.k.a. Tsar Alexis I playing chess)

Another artist, Vyatcheslav Shvartz, would depict the cat engaged in joyful play in his ‘Scene From the Life of Russian Tsars’. Following in Aleksey Mikhailovich’s footsteps, other tsars also began using cats as trusty companions. 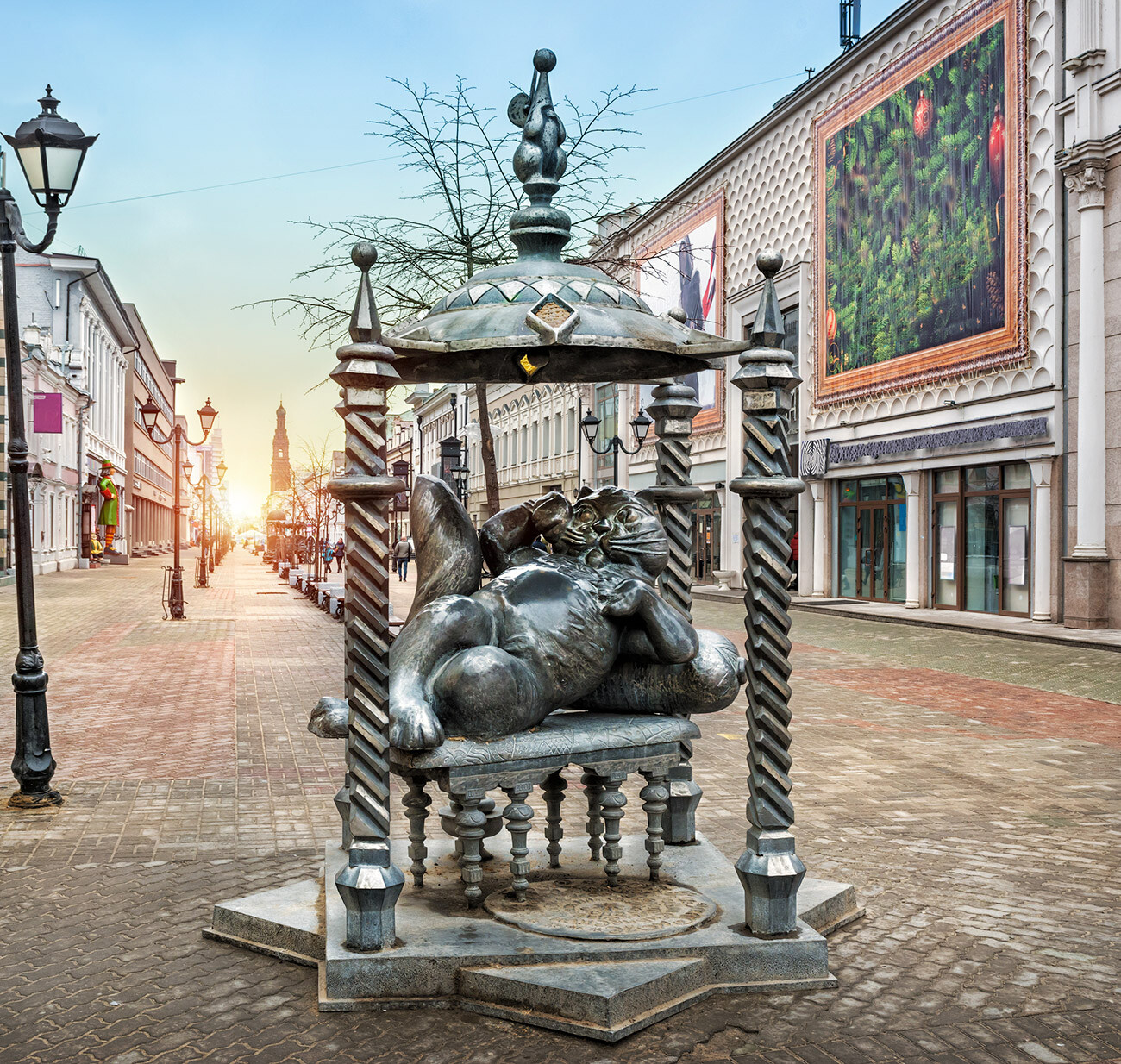 Monument to a cat from Kazan

Peter I brought one back from the Netherlands, while Elizaveta Petrovna ordered a whole shipment of purebred mouse hunters from Kazan, to address the Winter Palace’s rodent problem. 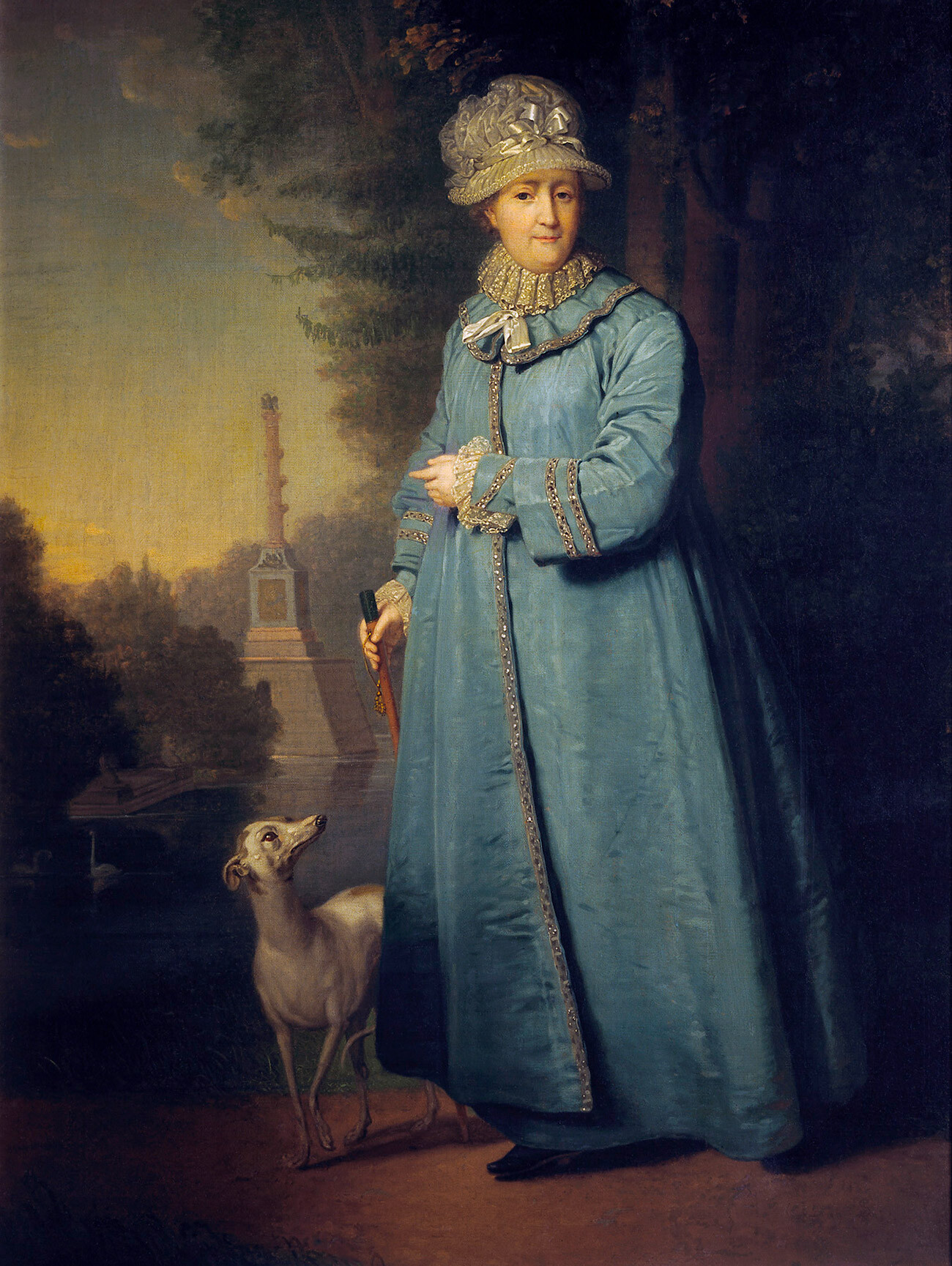 Catherine II adored dogs. Her biggest passion was for greyhounds: a pair of small elegant ones, whom she named Mr. Tom and Mrs. Anderson, were gifted to her by Thomas Dimsdale, a doctor. They became the progenitors of an entire family of imperial dogs. The empress would present their offspring as gifts to her entourage. The stately greyhounds lived at the Volkonsky, Naryshkin and Orlov households. And, although a special servant was assigned to look after the quadropedals, Catherine herself was always the one to walk them. One such scene was depicted by artist Vladimir Borovikovsky.

In one of her correspondences, Catherine happily shared how her pets were doing, frequently apologizing for her lousy handwriting and ink blots that one of her unruly dogs would end up leaving on the paper. One of Catherine’s favorite dogs was Mr. Tom’s great-granddaughter, Zemira. The empress spared no expense in making the dog’s life one of pure luxury. It would even get to sleep on her mistress’s old fur coats.

Catherine would find it especially hard to deal with the death of any of her animals. Whenever she went on walks at the Tsarskoe Selo residence, she would always stop by their gravesite by the Bolshoe Lake. 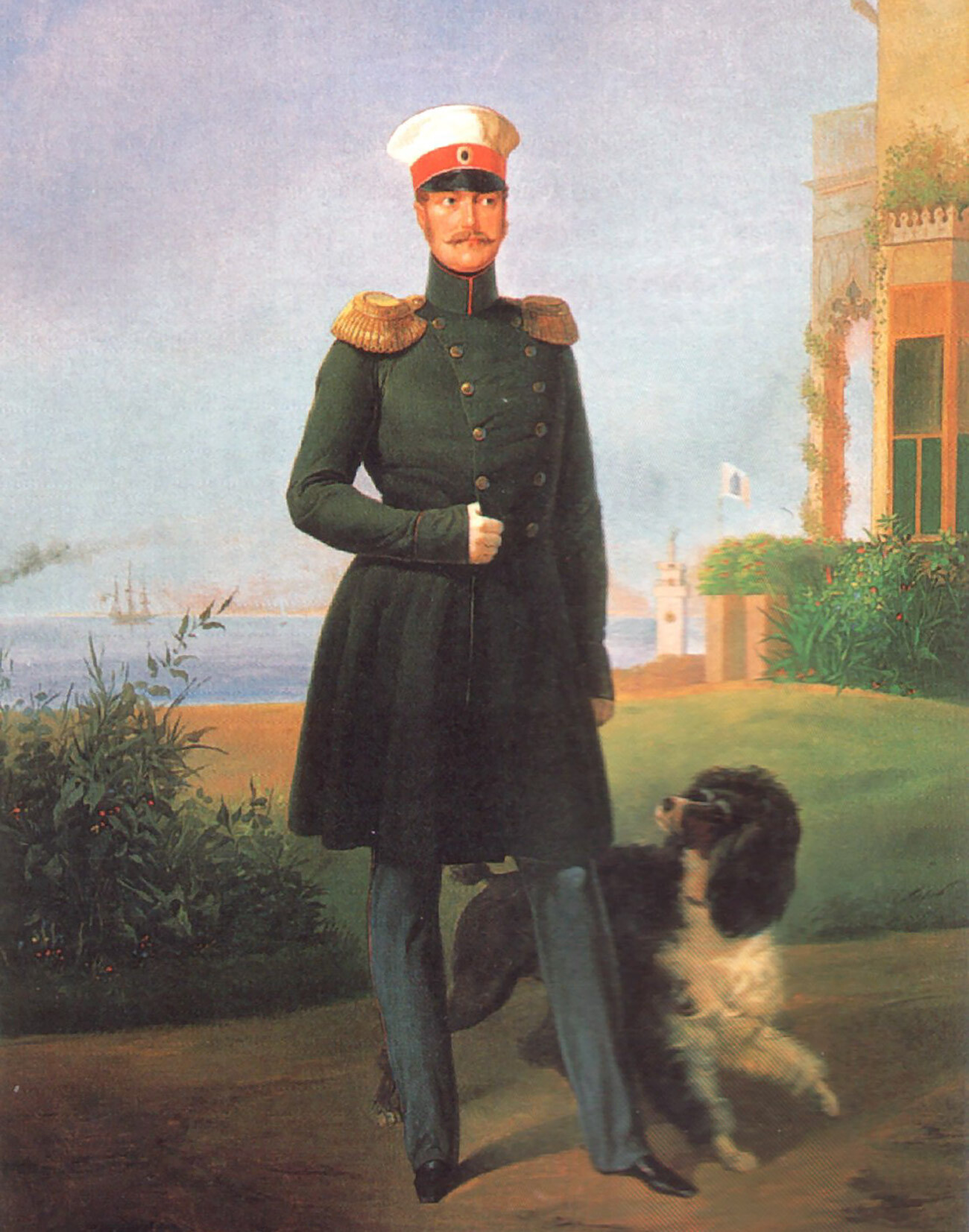 Georg von Bothmann. Nicholas I of Russia with dog

Whenever people traveled to the German city of Karlsbad, they would always try to visit the show where Minuto the Poodle would perform calculations, guess colors and even cards. Word of the miracle dog reached ambassador Dmitry Taischev, who bought it as a gift for Nicholas I. The Russian tsar renamed him ‘Gusar’ (hussar) and the dog became the apple of his eye: Nicholas would personally walk it and feed it bread sticks at breakfast. If a member of the Royal court required summoning, the tsar would send the dog, which always found the required person and tug at their clothes. 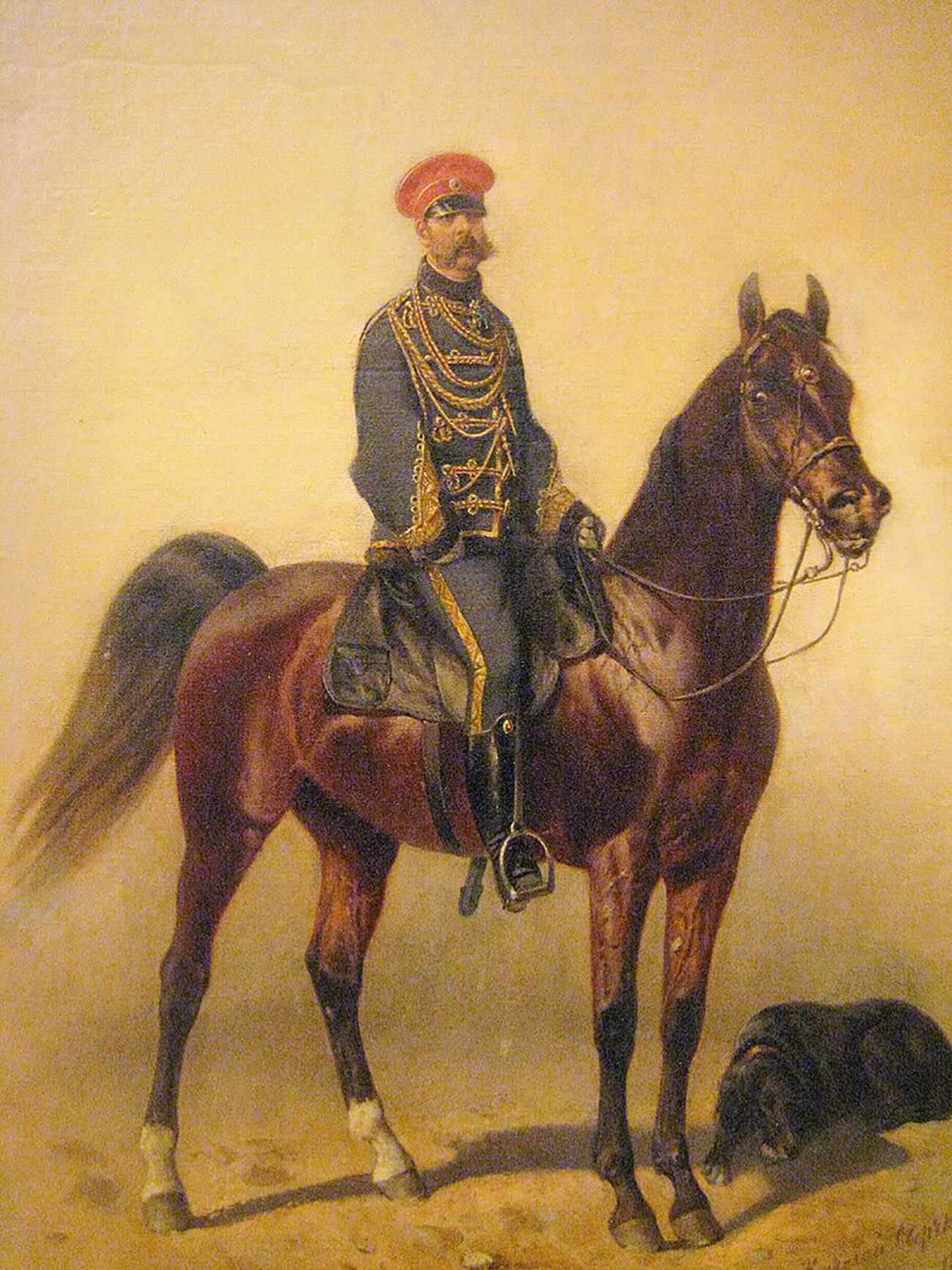 Aleksandr II’s favorite setter Milord was, likewise, walked by the tsar personally. No one was allowed to take over the task. The black dog with a white paw was known to everyone: the setter would occasionally misbehave and ambush various members of the court during walks in the Summer Garden. One such unfortunate soul was a young man on his way to give his grandmother a pretzel. Having seen the emperor, the man immediately stood fast and gave a salute. At that precise moment, some unseen force snatched the bread from his other hand. It turned out to be Milord. The emperor ordered the kitchen to bake a cake as substitution for the stolen pretzel and the young man was compensated to the tune of several pounds. 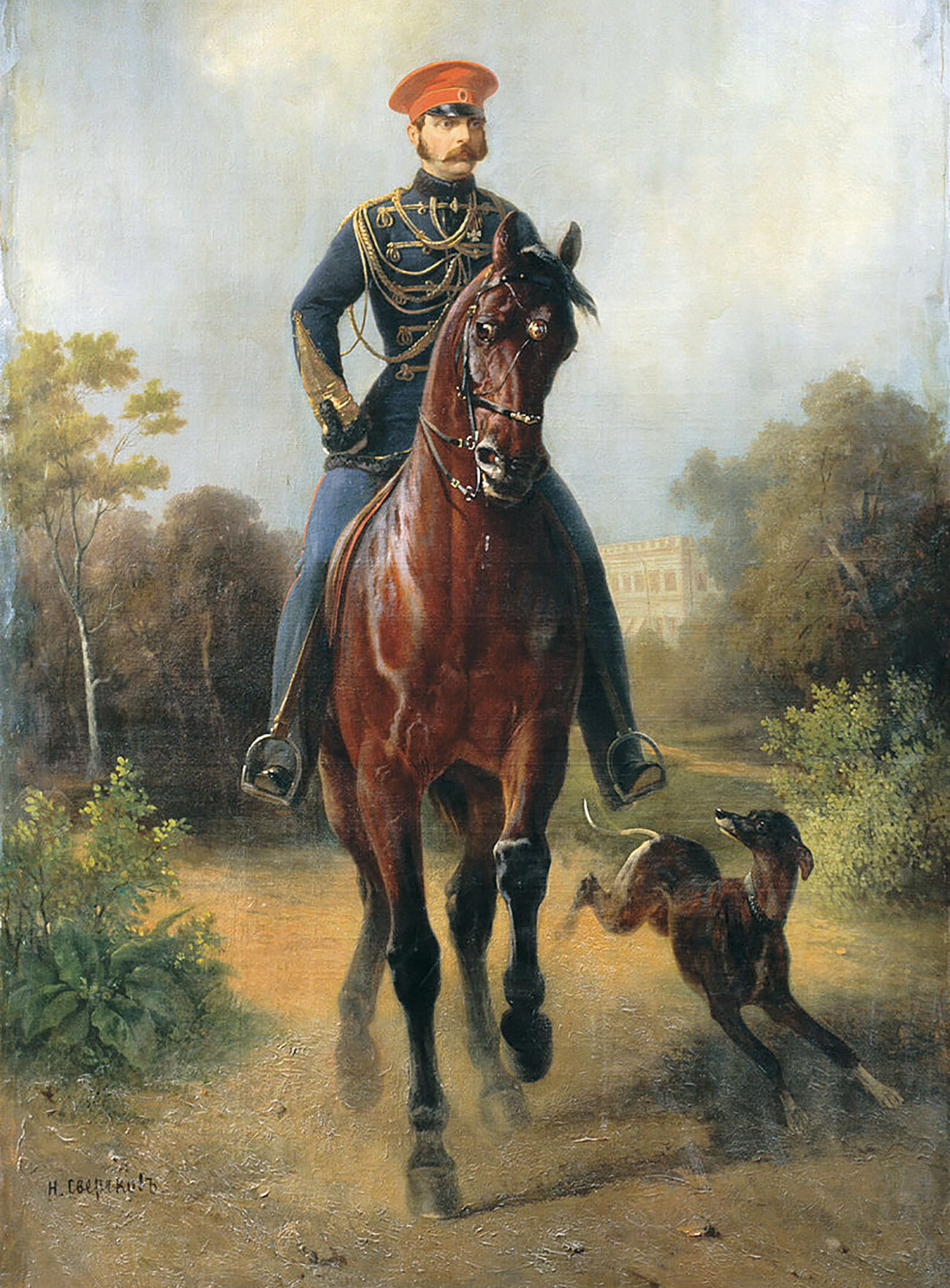 As with Catherines’ greyhounds, the tsar’s setter produced offspring, one of which was taken by legendary author Lev Tolstoy. So attached was Milord to his owner that it ended up being his undoing. During a trip to a global exhibition in Paris in 1867, the emperor opted to leave the setter home and the dog, sadly, died of despair. 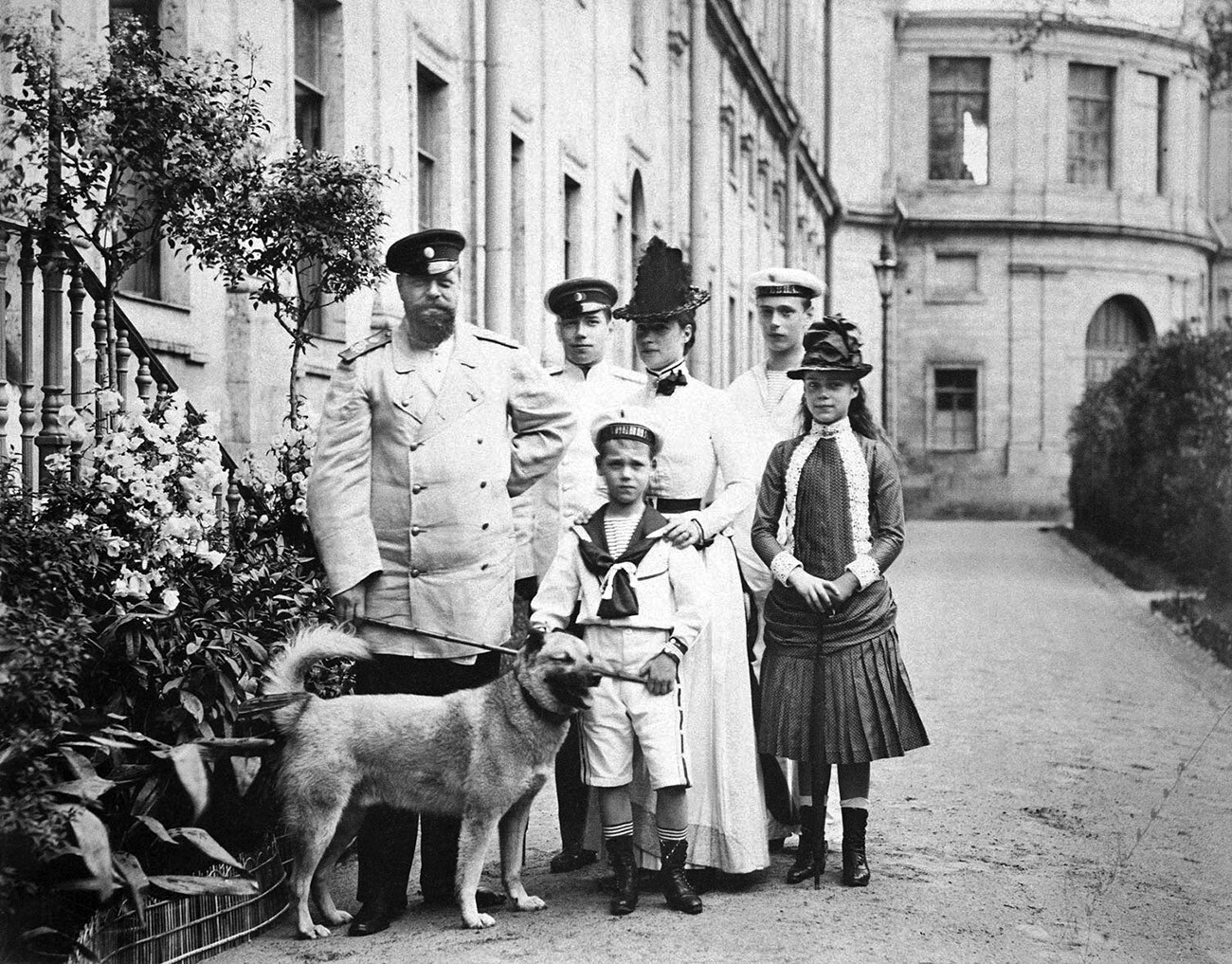 “Do I have even one selfless friend among men? No - and I could never have one. There was one among dogs, however - and Kamchatka was one such dog,” Aleksandr III said in memory of his white spotted husky. The dog was brought back from a round-the-world voyage by sailors of the battleship ‘Africa’. He would take it hunting, allow it to sleep in his quarters and feed it specially made liver and mince snacks. 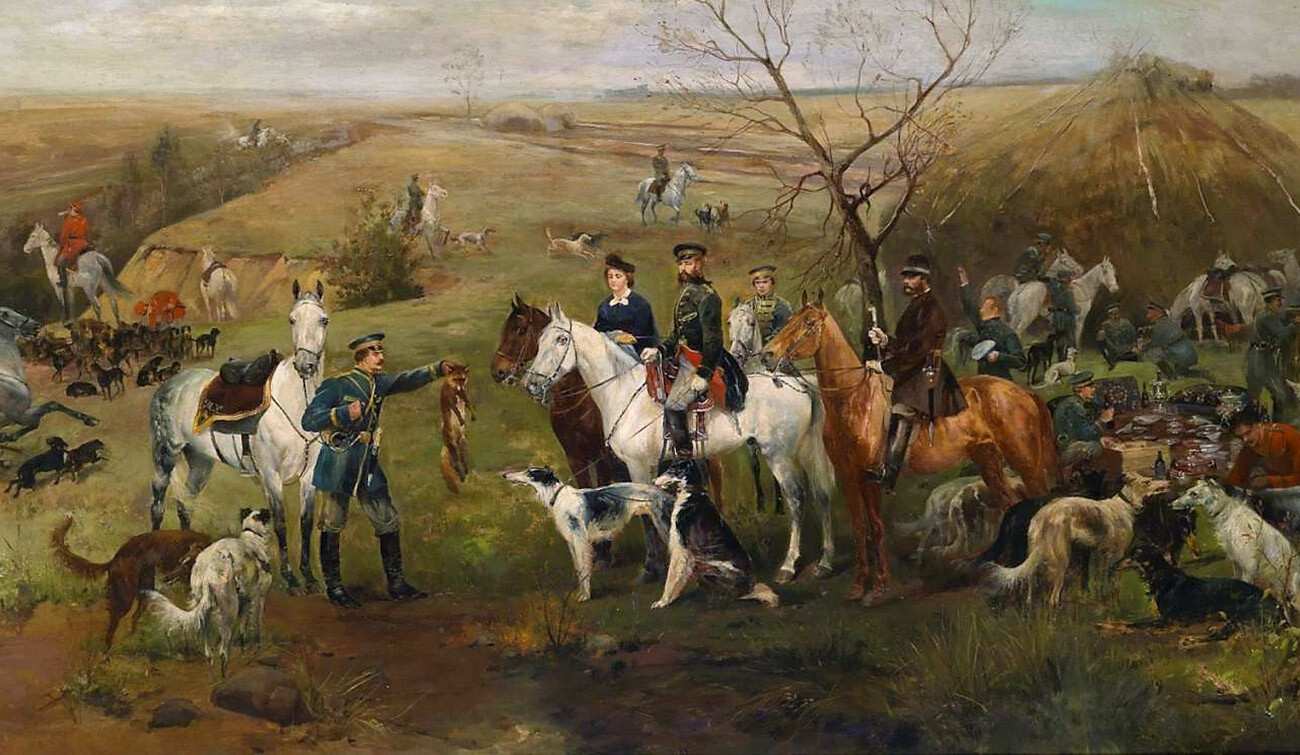 The dog’s life was tragically cut short when a train with the Royal family onboard was on its way back from Crimea to St. Petersburg and was derailed. All the family members survived the crash with minor bruises, but Kamchatka died. Aleksandr ordered the dog to be buried at Gatchina, in the garden opposite his study. 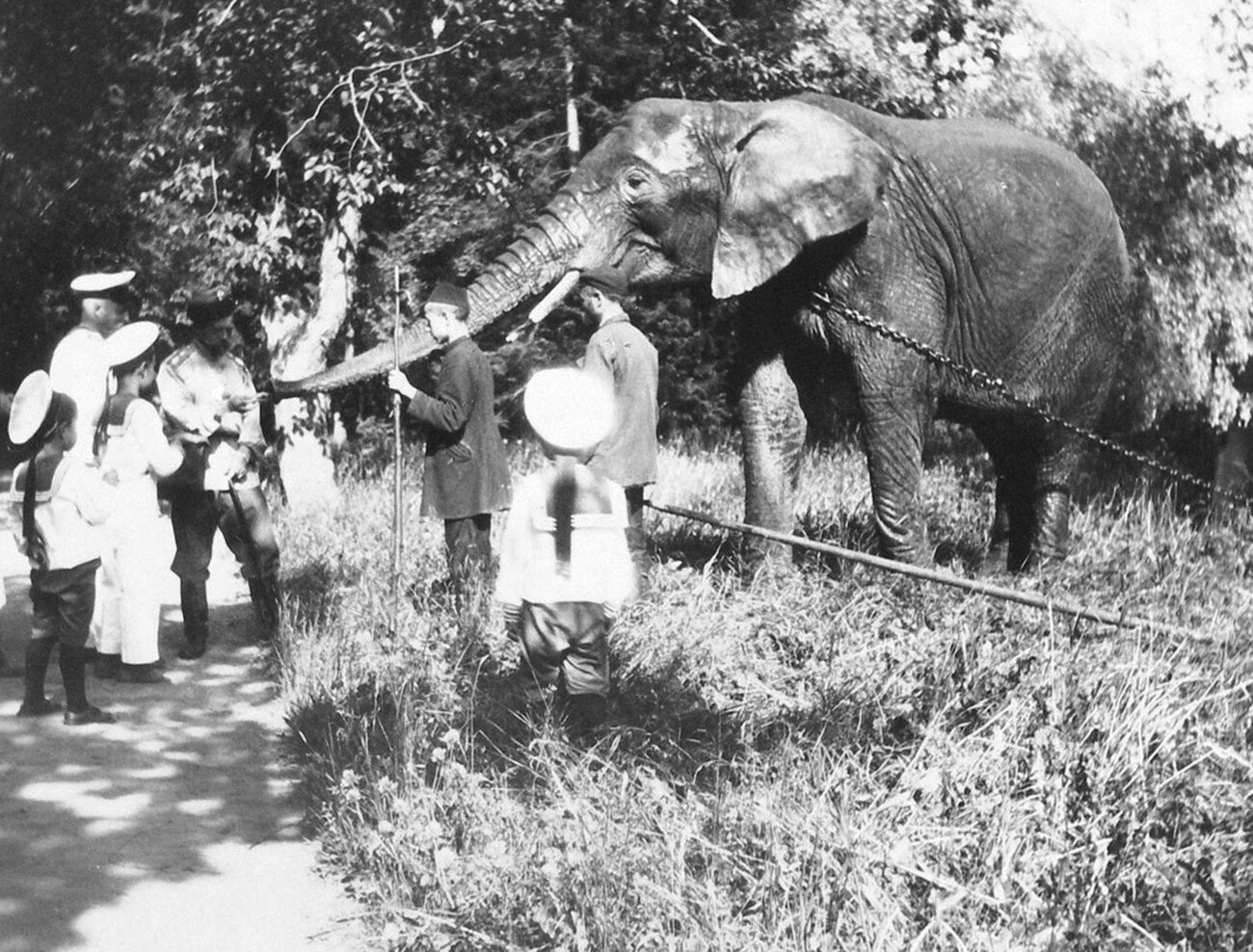 These majestic animals were being given to the Romanovs as gifts since the early 19th century. They had their own special enclosure at Tsarskoe Selo. A pair of friendly giants was given to Nicholas II: he brought back an Indian one in 1891, when traveling to the East, while an African elephant was brought back from Abissinia at some point. The elephants had their own caretaker, who also oversaw their training. Keeping them wasn’t cheap and cost some 18,000 rubles a year. Every day, one elephant would consume two poods (~32 kilograms) of butter-fried flapjacks. Another daily ritual was a trip to the nearby pond, where the elephants took baths. Nicholas would write in his diary: “Aleksey and I brought the elephant to our pond and had a joyful time watching it bathe.” The African giant lived at Tsarskoe Selo until 1917, when it was shot dead by mutinying sailors of the Revolution.