The elephants that entertained Russian tsars

History
Georgy Manaev
Tsarskoye Selo Museum
‘Russia is the motherland of all the elephants,’ an old joke goes. Ironically, there were numerous elephants have made their mark on the country. Some had tiger’s claws, drank vodka, entertained the tsars, and took part in weddings.

The first elephant in Russia had hare’s ears and tiger’s claws! A pair of bas-reliefs with elephants used to guard the southern wall of the Saint George Cathedral in Yuryev-Polsky (Vladimir Region, 180 km from Moscow). Today only one of them is left. Whoever created this elephant never saw it in the flesh; only in the 16th century did the huge beasts arrive on Russians soil. 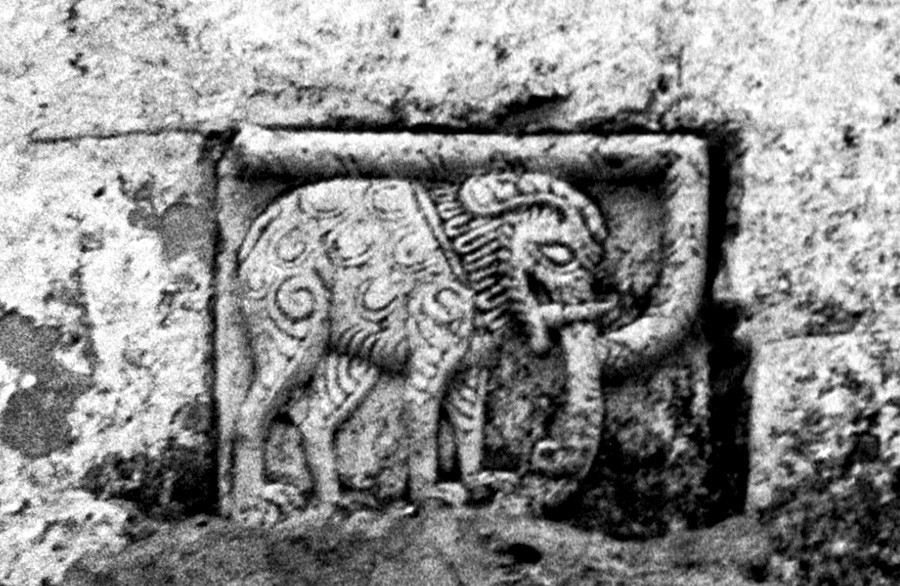 Exotic animals were a usual royal gift in the 16th century. So Persian Shah Tahmasp I sent an elephant to Tsar Ivan the Terrible to express his affection. Heinrich von Staden, a German in Ivan’s service, wrote that the elephant came with its minder. Legend has it that on arrival, the elephant was so tired that it fell to its knees immediately after seeing Ivan, which pleased the Tsar, so he gave the minder a healthy salary, which made many poor Muscovites envious. When in 1570, the plague spread through Moscow, many blamed the beast. The elephant and his minder were sent away to a remote town, where the musher died. People feared that without proper care, the elephant might go mad, so the Tsar sent a hit squad to kill the animal. The elephant was found on his minder’s grave, refusing to leave. Its trunks were sent to Ivan as proof that it was dead.

2. Elephants owned by Peter the Great 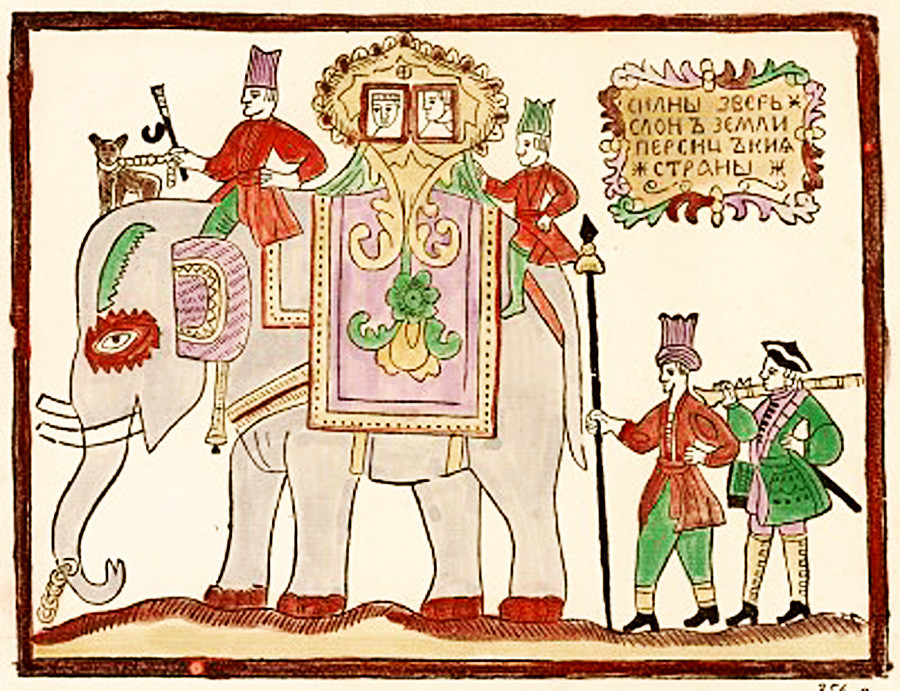 Persian Shahs continued to supply Russia with elephants. In 1713, one was sent to Peter the Great. Andrey Denisov, a contemporary, saw the beast in Moscow en route to St. Petersburg. His affectionate description related that the elephant’s legs were “of man’s height and as thick as a log,” the beast was “black of color,” had a “ back” and a “hunched spine,” walked “heavily like a bear” and his ears resembled “oven doors.” In St. Petersburg, the elephant’s minders made money by dressing the animal lavishly and taking it to rich people’s houses during holidays. The elephant lasted only three years in the St. Petersburg climate. The Shah then sent another smaller one, who was kept in the Great Meadow (now the Field of Mars, St. Petersburg) and was “very tame and domestic,” according to contemporaries. “With his trunk, he took white bread from us, and he played with his guardians, lifting them high up in the air.” 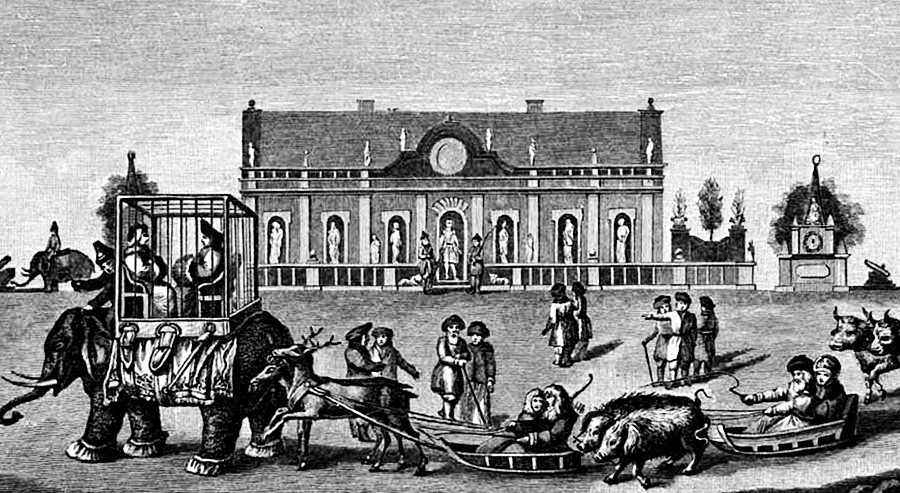 The elephants during the wedding in the Ice House, 1740.

1736, another Persian elephant was gifted to Anna of Russia, the Empress who loved circus entertainment. The elephant was placed in the care of three keepers who frequently took him out into the streets for people to look at. The sources show the elephant’s annual ration: 24 tons of hay, 2,200kg of rice, six tons of flour, 450 kg of sugar and also cinnamon, nutmeg, dianthus, saffron, and other spices. And vodka – about 600 liters a year.

Anna herself once watched the elephant do tricks for over an hour, and she liked it so much she “commissioned” the beast to take part in the famous jesters’ wedding in the Ice House. But this was not the last elephant Persian rulers sent to Russia.

4. Elephants as a proposal: Elizabeth of 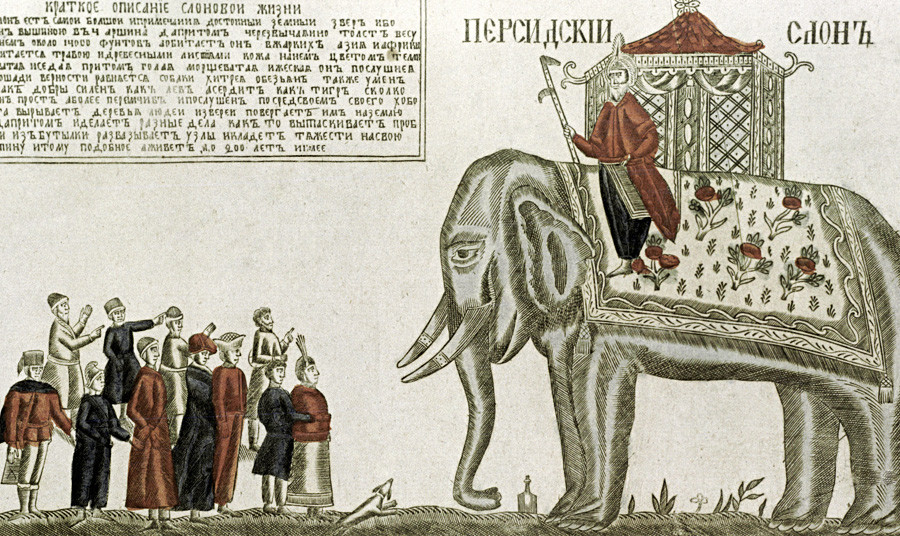 Oct. 10, 1741, 14 elephants were presented as a gift to the Russian princess Elizabeth, daughter of Peter the Great, from Persian tyrant Nader Shah Afshar. Five of the elephants were to please Ivan VI, an infant  who had just taken the throne, two – for his mother Anna, and seven – for the lovely Elizabeth. Along with elephants, luxurious Persian jewelry and crockery were brought. Nader Shah Afshar sought the marriage to strengthen his ties with Russia amid a strained relationship with Turkey. But Chancellor Andrey Osterman stopped the Persian envoy from seeing Elizabeth. The envoy was sent back with nothing.

The elephants were placed in the Great Meadow in enclosures. Also, some St. Petersburg roads and bridges were strengthened to hold the elephants during their walks. Asatiy, the keeper who looked after Anna’s elephant, asked for strong metal chains to hold the elephants in place, and it turned out they were needed. In six days, the elephants “became aggressive due to the females, three of them escaped. Two were soon caught, while the third reached Vasilyevsky Island, where he damaged the Senate building and a ran amok in a Finnish village,” wrote a St. Petersburg newspaper. The beast attacked the building of the Twelve Collegia located on Vasilyevsky island, where the Senate resided at the time. 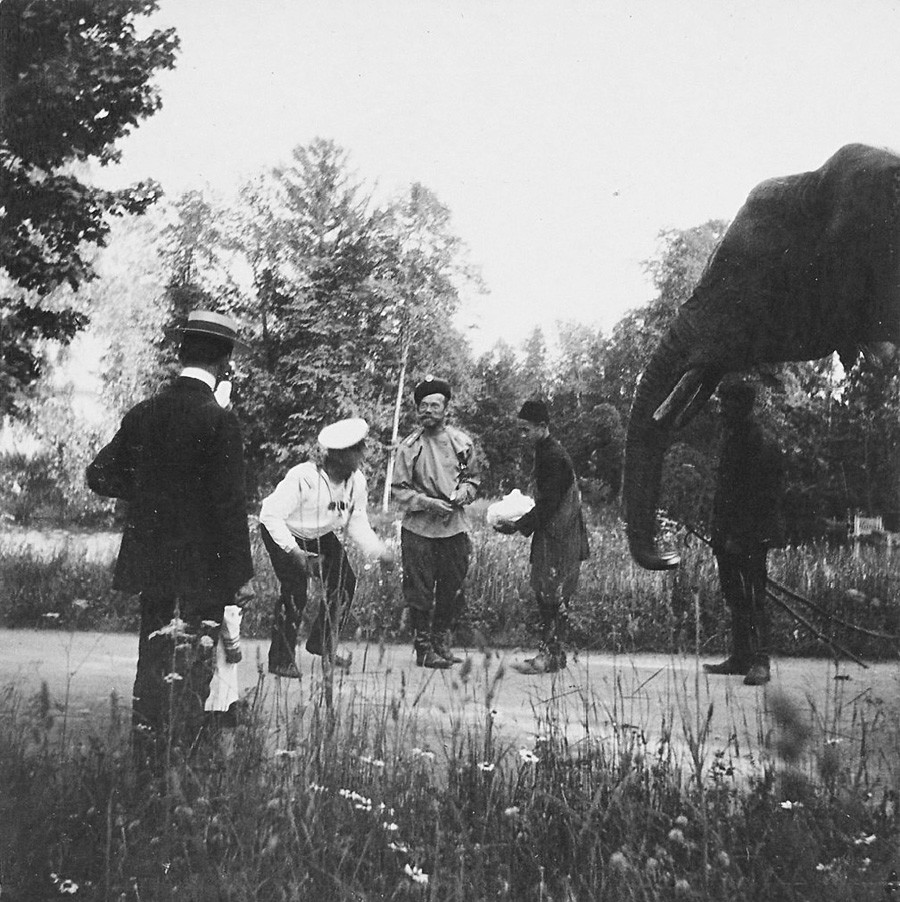 Elizabeth, nearly every Russian Emperor had an elephant simply for entertainment. They were kept in the Tsarskoye Selo residence near St. Petersburg. But Nicholas II, who was known for his love to animals, brought his elephant home himself. 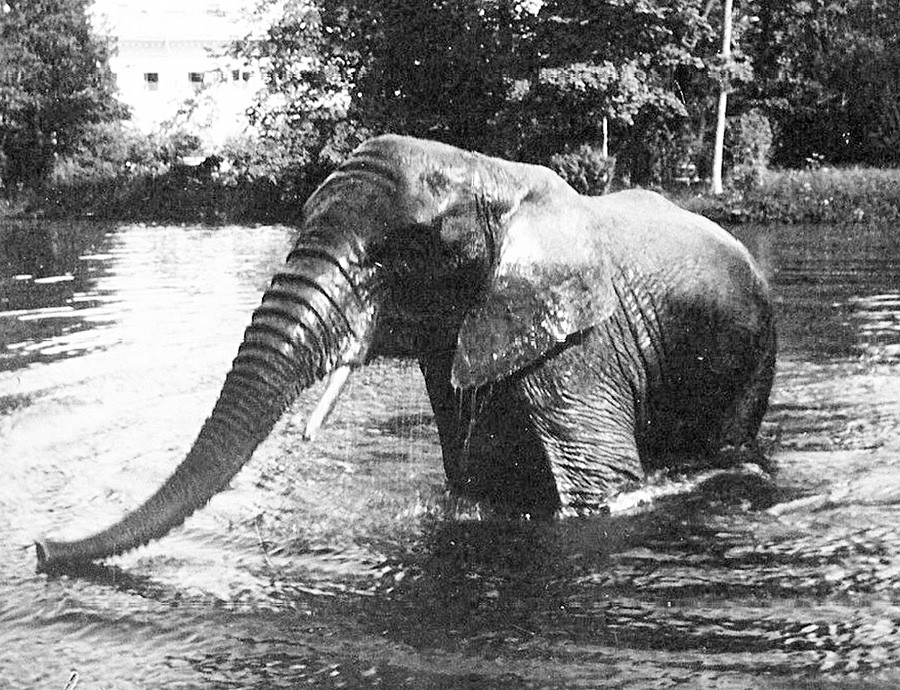 The elephant bathing at Tsarskoye Selo.

In 1891, Nicholas (a Grand Duke at the time) brought an elephant from his world trip. In 1896, he received another elephant from Abyssinia (Ethiopia). This elephant lived a long and comfortable life in Tsarskoye Selo. “The elephant is remarkably good-natured and is very attached to its keeper. 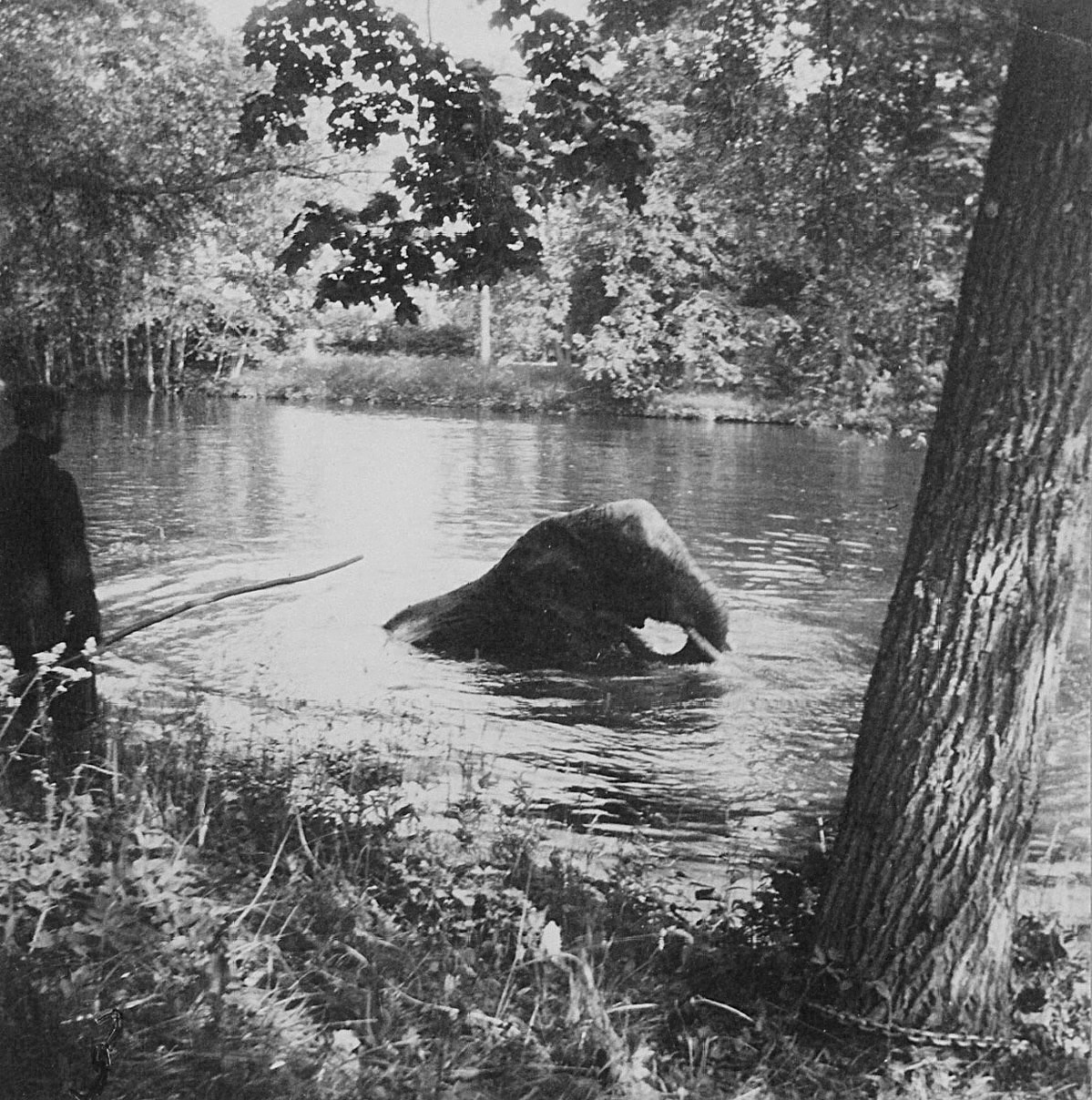 In the summer, it walks outside freely and every day it bathes in Alexander Park.” The Emperor loved to see the elephant swim and often brought all his children to watch 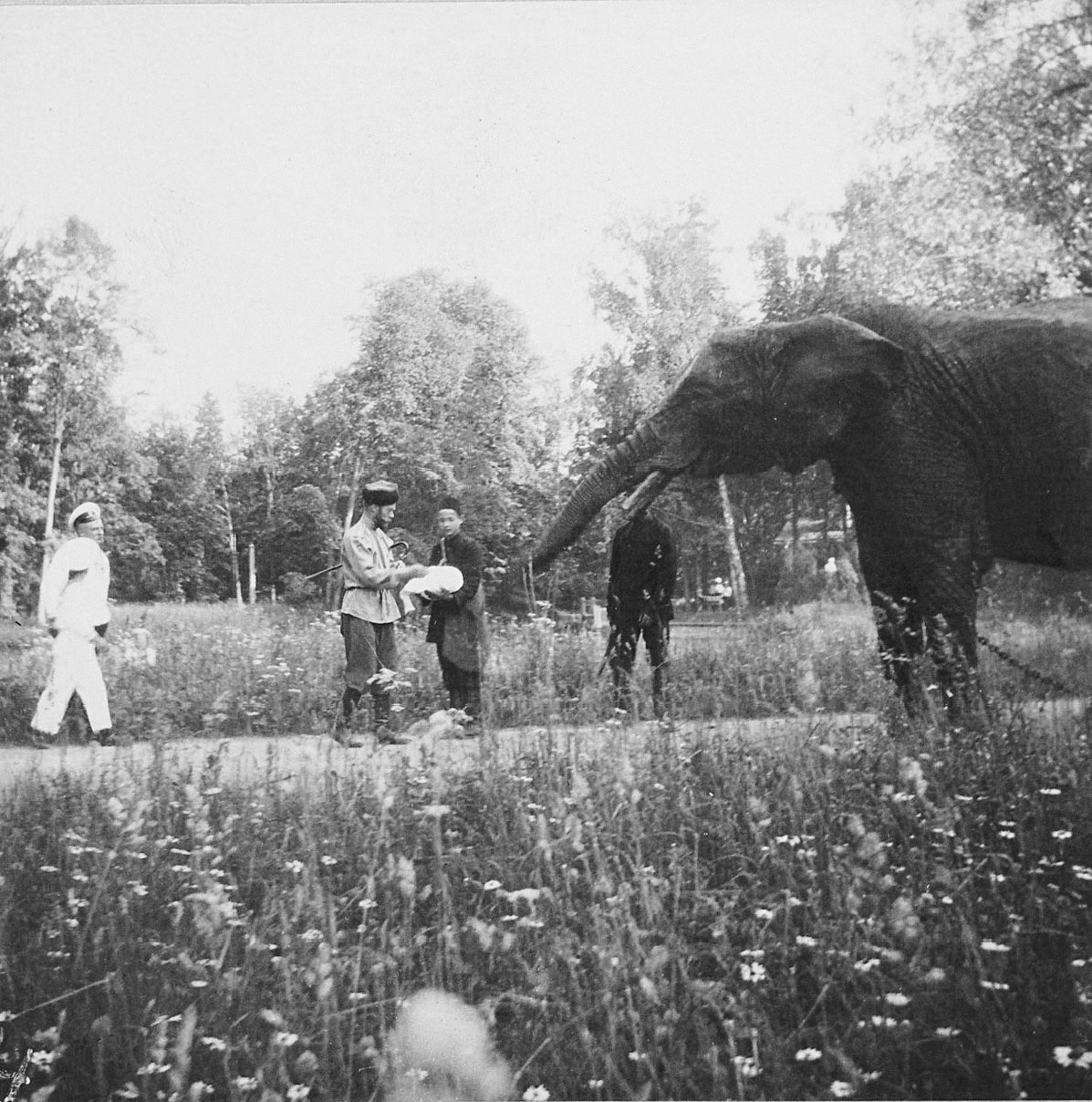 Abyssinian elephant was killed in 1917 because it was viewed as a symbol of the autocracy, just as Ivan the Terrible’s elephant had been. Sadly, the beasts’ only “fault” was the lavish lifestyle they enjoyed in royal residences.

By the way, Russia is indeed the home of the elephant – find out why.