Snow-how: Chasing drinks, building palaces and other things Russians do with snow 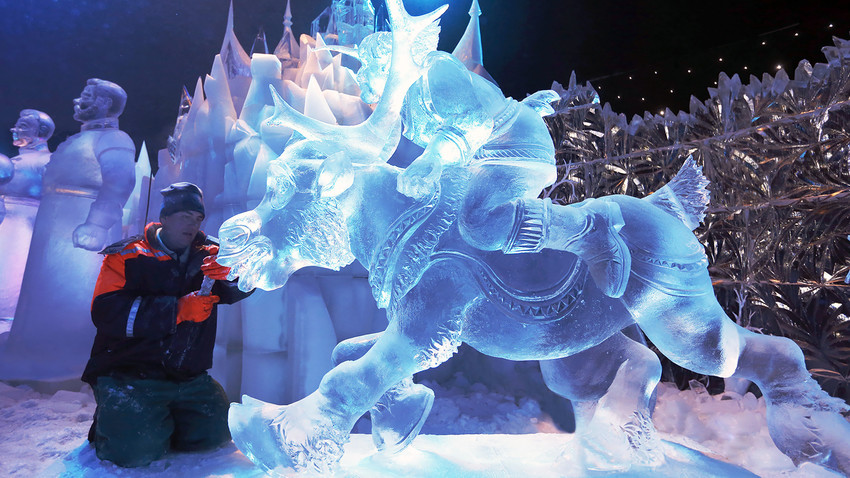 Reuters
Russia is a country associated with cold, winter and snow. Russian people of different cultures and ethnicities have some intricate and unconventional ways of using frozen water, which we share with you here! 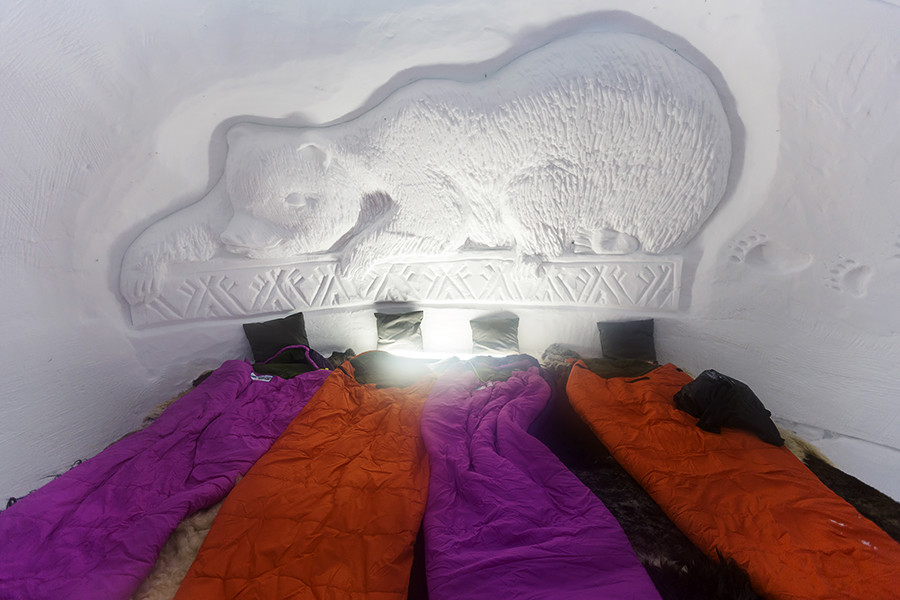 The interior of an igloo hotel unveiled next to the Nachikinsky Health Resort in Yelizovsky district, Kamchatka.

Igloos are houses of ice and snow, traditionally built by Eskimo people. In Russia, there are only about 2,000 Eskimos who live mainly in the Chukotka region. Spending most of the year in harsh winter condition, Eskimos have learned to build their houses out of snow.

From two to four meters in diameter, and two meters height, this dwelling is constructed from blocks of snow. The entrance into the igloo is below the ground, so that warm air stays inside, while heavy carbon monoxide drifts out of the room. Inside, the floor and walls are covered with fabric or animal skins, lighting is provided with burners, and it’s quite dry inside, because the snow absorbs any moisture immediately.

Sometimes, Eskimos build whole igloo villages, with separate igloos connected with under-snow passages. In 2016, a hotel consisting of igloos opened for tourists in Kamchatka. Russian blogger Alexander Kamenyuk spent a night at the hotel (link in Russian). He reports that inside, the hotel igloos are decorated with reliefs picturing hunters and animals of Kamchatka. “The temperature inside doesn’t drop lower than -3 Celsius (26F), however cold outside. Sleeping in sleeping bags is warm, but it’s cold to undress in an igloo. So it’s better to have a dip in a warm thermal spring and slip quickly into a sleeping bag”. 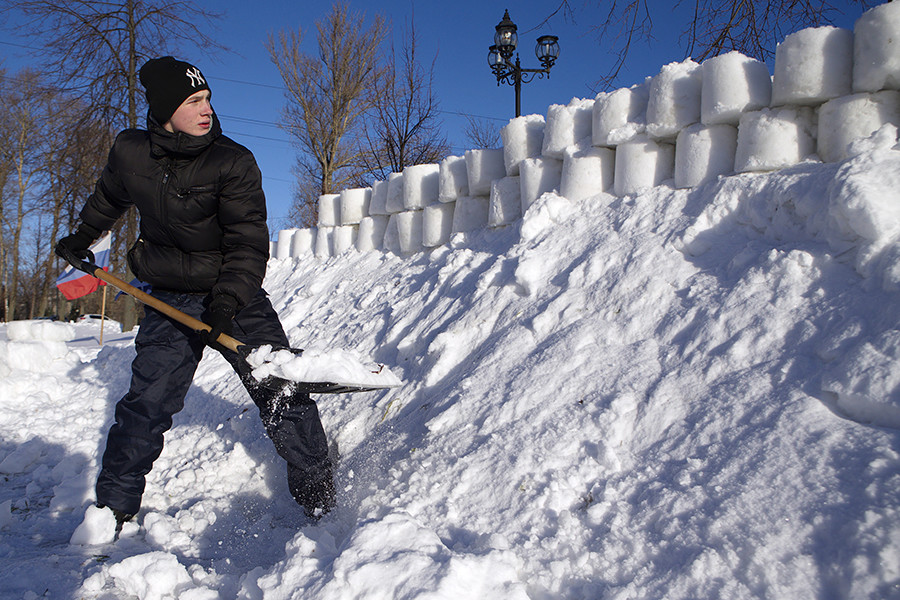 A local fortifies a wall of a snow fortress in Rybinsk.

Also, there is a traditional Russian game of capturing a snow fortress, usually played during New Year or Maslenitsa celebrations in just before Lent. The fortress in constructed the day before the “battle”. The capture itself turns into a fierce snowball fight. Unfortunately, during recent years it’s been all but impossible to build a solid snow fortress in the central regions of Russia: the snow is too dry. 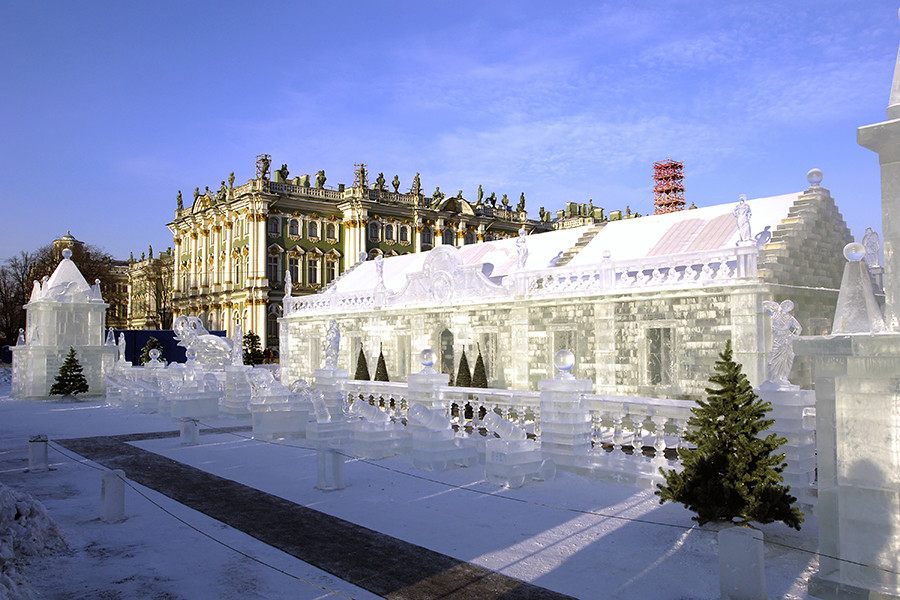 Ice Palace on Palace Square in St. Petersburg, a loose copy of the Ice Palace built during the reign of Russian Empress Anna Ioanovna in the 18th century.

One of the most famous ice buildings in Russia was an Ice House, constructed in 1740 for the coarse entertainment of Empress Anna (1693-1740). This time, she decided to organize a mock wedding.

The groom was prince Mikhail Golitsyn, who - as a punishment for converting to Catholicism - was humiliated and served as a jester in court. And the bride, a Kalmyk woman Avdotya, also a court jester, who was renowned for her ugliness. The wedding was set as a parade of the different indigenous peoples of Russia. French envoy, the Marquis de La Chétardie, reported to his court that “Samis, Samoyeds, Kalmyks, Kazaks all appeared in masquerade costumes, forming a procession of more than 200 people following or preceding the newlyweds, who were confined in a cage that stood on an elephant’s back. Some "of the indigenous peoples" were riding carts harnessed to oxen, others in carriages pulled by boars, pigs, goats and dogs. Samis and Samoyeds were remarkable for their clothing made out of animal skins and their sledges pulled by reindeer… After the meal, there was a ball, where each tribe danced their dance. After that, the couple was taken to the Ice House, where they stayed until 8 in the morning…”

For the wedding, the Ice House was constructed - and on a large scale: the architect was Pyotr Eropkin, credited with replanning St. Petersburg after the death of Peter the Great. The house was 20 meters tall and 50 meters wide - a real palace! The garden was filled with ice trees, the house furnished with ice furniture; there were ice bed sheets and ice crockery.

Georg Kraft, a mathematician who took part in the planning of the Ice House, described that “in front of the house, six ice cannons were placed, that were fired numerous times… Also, two ice dolphins… that with the aid of pumps spat fire from burning oil from their mouths, which looked very splendid at night…” There was, Kraft wrote, even an ice elephant, “that was empty inside, and made so cunningly, that by day, it could operate as a water fountain, delivered through pipes, and by night, to the great splendor of all spectators, spat out burning oil. Above all this, he could scream like a real elephant, the voice made by a man hidden inside with a trumpet”.

The “couple” was forced to spend the night in this ice bedroom under guard, surviving only because the bride managed to bribe one of the soldiers and get a sheepskin coat. The Ice House melted the next summer, but became known to the public in the 19th century, when Ivan Lazhechnikov wrote his eponymous novel. 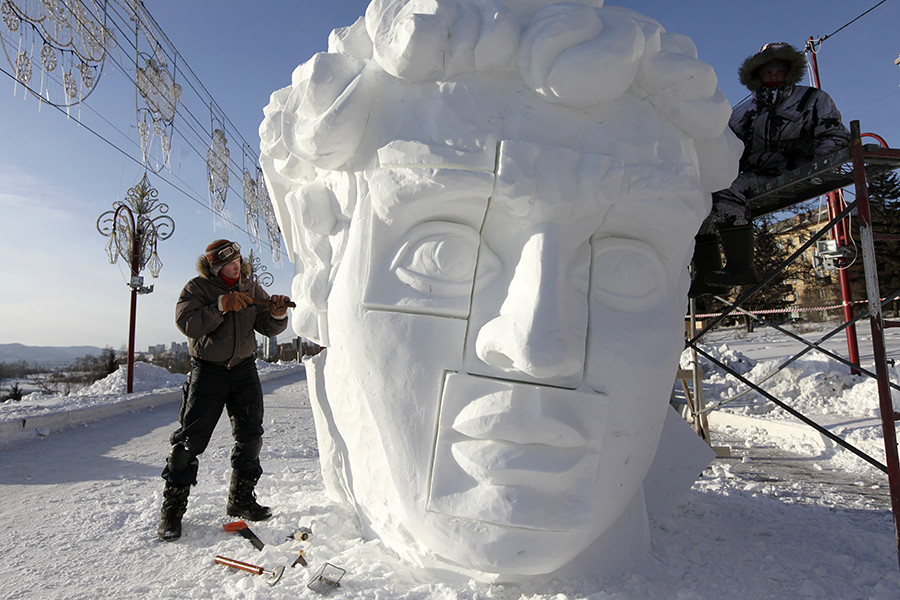 Members of a team from the Russian Ural city of Perm work on a snow sculpture during the 1st International festival of snow and ice sculptures "The Magical Ice of Siberia" in Krasnoyarsk.

Ice and snow sculptures are not exclusively a Russian thing, but in a country so full of snow they have been always popular. Russia hosts an annual competition in snow and ice sculpture, supported by the ministry of culture.

There is also a Siberian festival of snow sculpture in Novosibirsk - it’s special because the participants are not allowed to use electric tools like chainsaws that speed up the creation of sculptures. Annual snow sculpture competitions are held in Moscow, Perm, Salekhard and other cities. 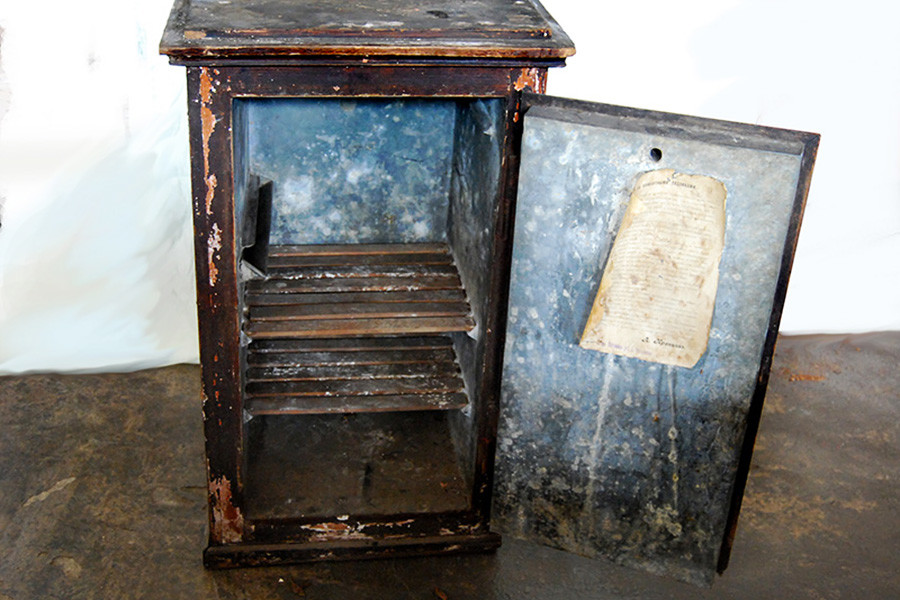 Quite naturally, Russians learned how to store pre-cooled food long before the invention of refrigerators. The old-time Russian refrigerator was called a lednik (led is ice in Russian) and it is mentioned in Russian records in the 17th century and earlier (the technology itself is not Russian and has been used since at least 1,800 years BC).

The simplest lednik is a box with double walls, between which ice is placed. In rural Russia, ledniks were made during winter with ice cut from the rivers. The lednik, placed in a deep cellar, could hold the low temperature for up to six months. Ledniks were used in housekeeping of the Tsar and the nobility. 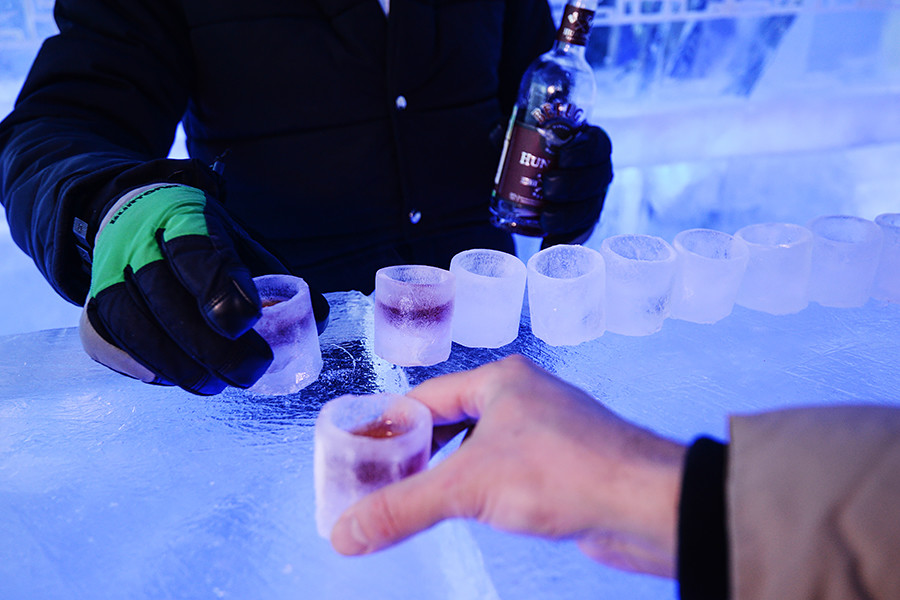 A bartender pours beverage into ice glasses at Twiggy ice bar in Novosibirsk.

Yes, many Russians (mostly males) have actually eaten snow... as a chaser, in their youth. Of course, people under 18 aren’t normally allowed to drink in Russia. The most an ordinary teen can get is a glass of wine or champagne at a family party. But when you’re young, you want to grow up real fast, and drinking has long been perceived as a sign of “coming of age” among young men. So, many teen boys used to empty their first shot of vodka on the streets, behind garages or in backyards, hiding from their parents and neighbors. In these conditions, fresh snow often served as a readymade chaser that cools the throat and washes down the spirits.

Disclaimer: Russia Beyond strongly advises against eating snow, even if you’re secretly Russian. You can catch a cold, get acute tonsillitis, or even blood poisoning, because snow collects all air pollution and impurities in big cities. If it is totally necessary for you to eat snow, stick to the ice crystals from your refrigerator, at least.

For your visual entertainment, take a look at the pictures of Russian winter games. Or be prepared for the celebration with anti-hangover cocktails from one of Moscow’s most experienced barmen.