Mikhail Gorbachev: How the world will remember the first & only president of the USSR 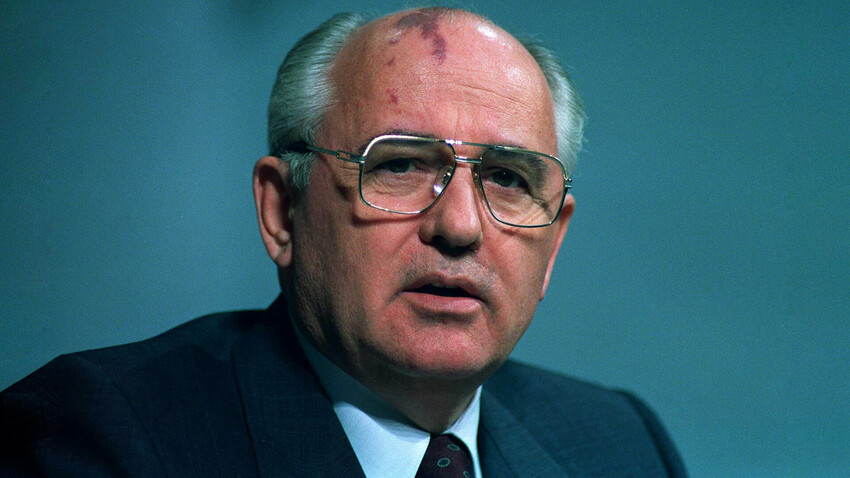 Legion Media
Mikhail Gorbachev, the father of perestroika and glasnost, passed away at the age of 91 on the evening of August 30, 2022, in Moscow.

As Gorbachev himself once recalled, “a long process of rethinking the history of the country that stretched over years” began with him as a student. His arrival to the post of General Secretary of the Central Committee of the CPSU on March 11, 1985, was not a surprise for the Soviet nomenklatura: Mikhail Gorbachev was in good standing with Leonid Brezhnev, had second and third people in the country as patrons and successfully showed himself as Minister of Agriculture of the USSR. 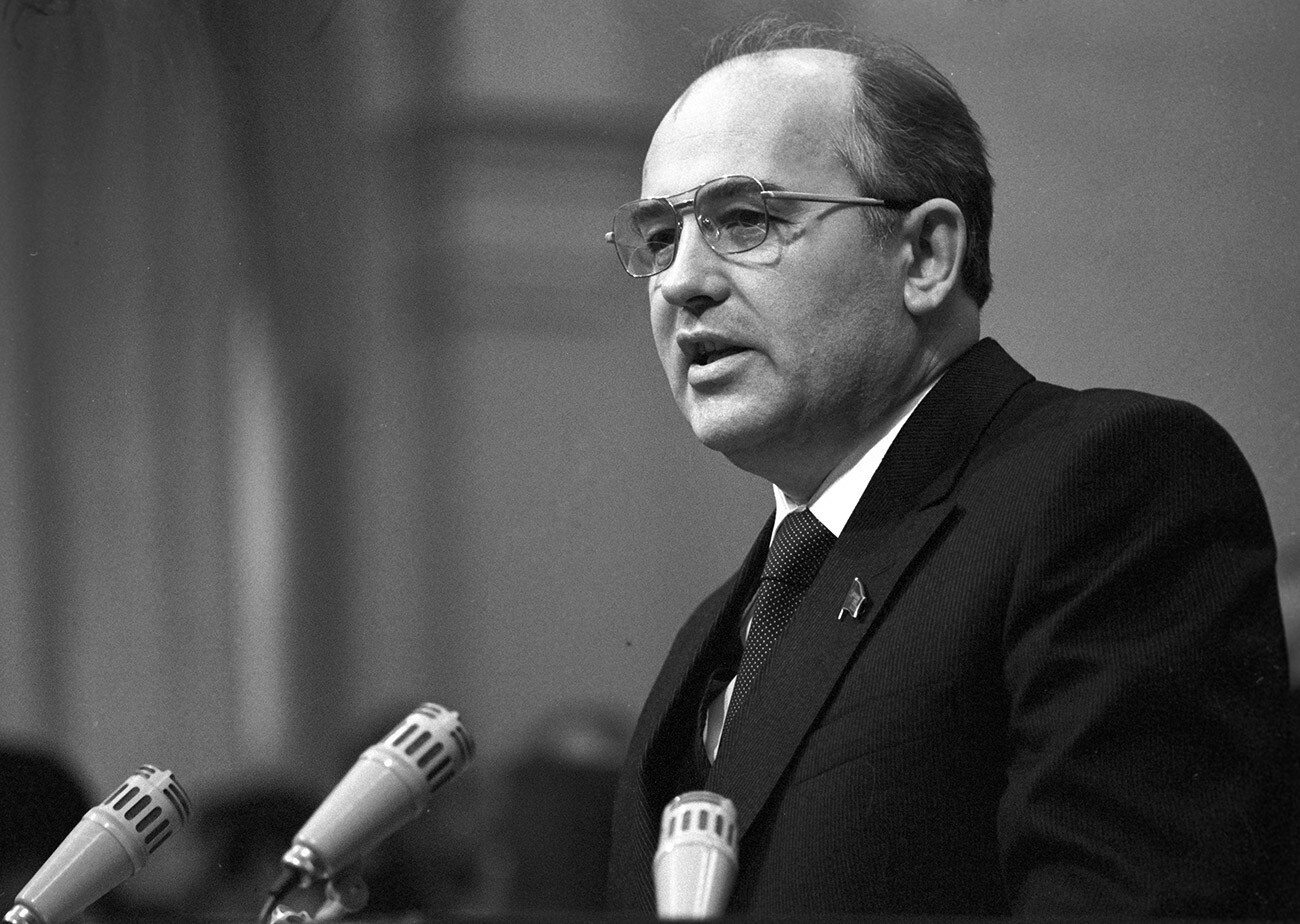 Mikhail Gorbachev, while being a candidate to members of the Political Bureau of the USSR's Communist Party, 1979

From an ambitious leader who was sympathetic to the West and the Soviet people, many expected changes. “Agreeing then to accept the essentially highest state post of the General Secretary of the Central Committee of the CPSU, I understood: It is impossible to live like this any longer and I will not allow myself to remain in this post if I am not supported in the implementation of fundamental changes,” he said in 1991, a year after receiving the Nobel Peace Prize “in recognition of his leading role in the peace process”. 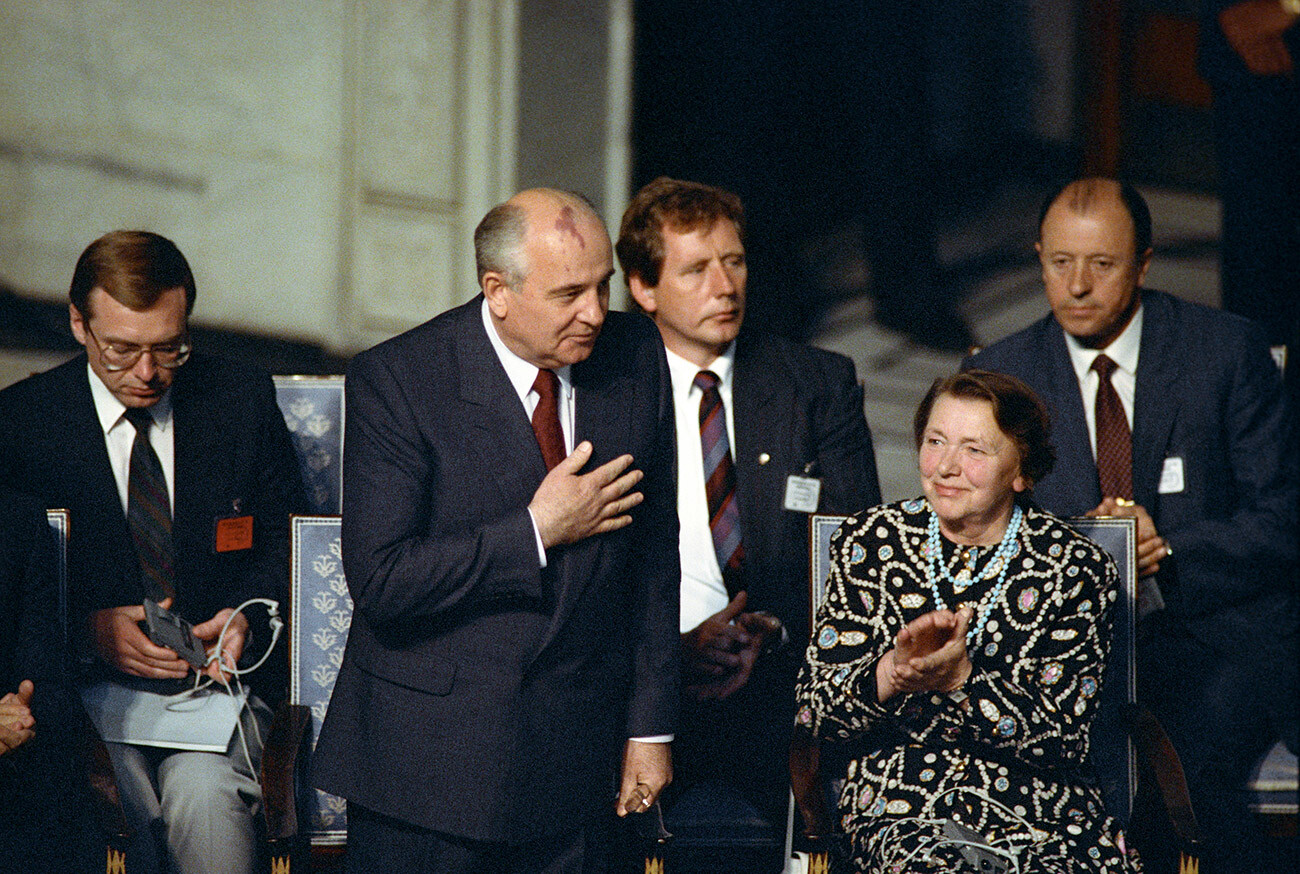 Winner of the 1990 Nobel Peace Prize, Mikhail Gorbachev, delivering a traditional speech at the awarding ceremony

Cardinal changes followed, but not all of them were accepted and understood. The anti-alcohol campaign, the so-called “battle for the sobriety of a country dying from vodka”, was the first painful step of Gorbachev-general secretary on the path to “perestroika”. This was followed by a massive personnel purge and rejuvenation of the ruling party. But he soon put an end to the long-term one-party system. The CPSU lost its constitutional status as the only leading force, elections appeared in the country, cut out according to a democratic model, and persecution for dissent stopped. Gorbachev returned Academician Andrei Sakharov from exile and continued the rehabilitation of the victims of Stalinist repressions who were not rehabilitated under Nikita Khrushchev. 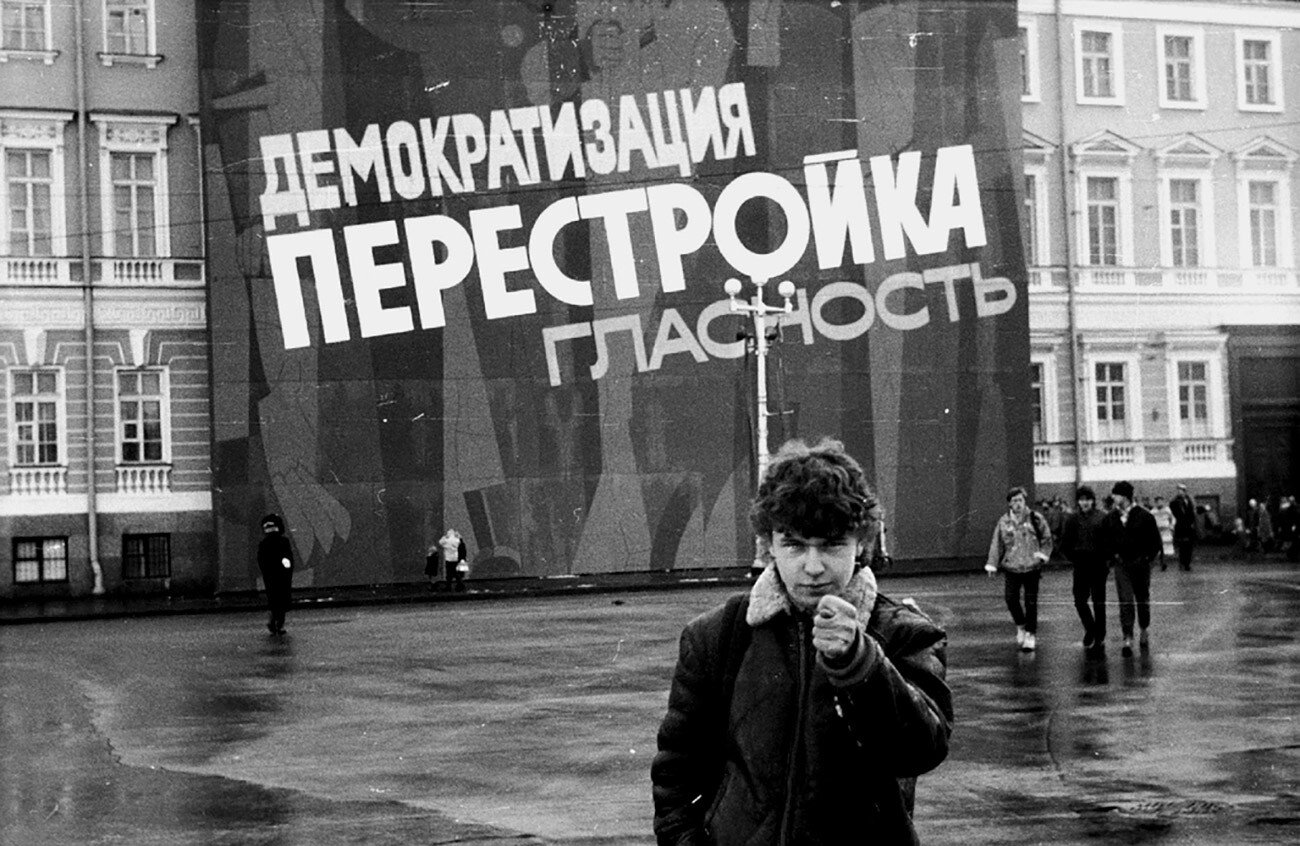 His main merit was the proclaimed publicity and the abolition of censorship: under him, the circulation of newspapers exceeded millions and the party and those in power could, for the first time, become a public object of criticism. Glasnost and democratization were not yet freedom of speech or democracy, but, without Gorbachev’s reforms, the path to them would have been too long.

Subsequently, Gorbachev was blamed for the gift of ‘glasnost’: allegedly, it was it that woke up the volcano of national self-consciousness, which led to the collapse of the USSR. Without publicity, the country and the world probably would not have learned about the Chernobyl nuclear disaster so soon - one of the main “blemishes” in Gorbachev’s political biography. Among other “blemishes” were Nagorno-Karabakh, the entry of troops into Azerbaijan and the dispersal of a rally in Alma-Ata. 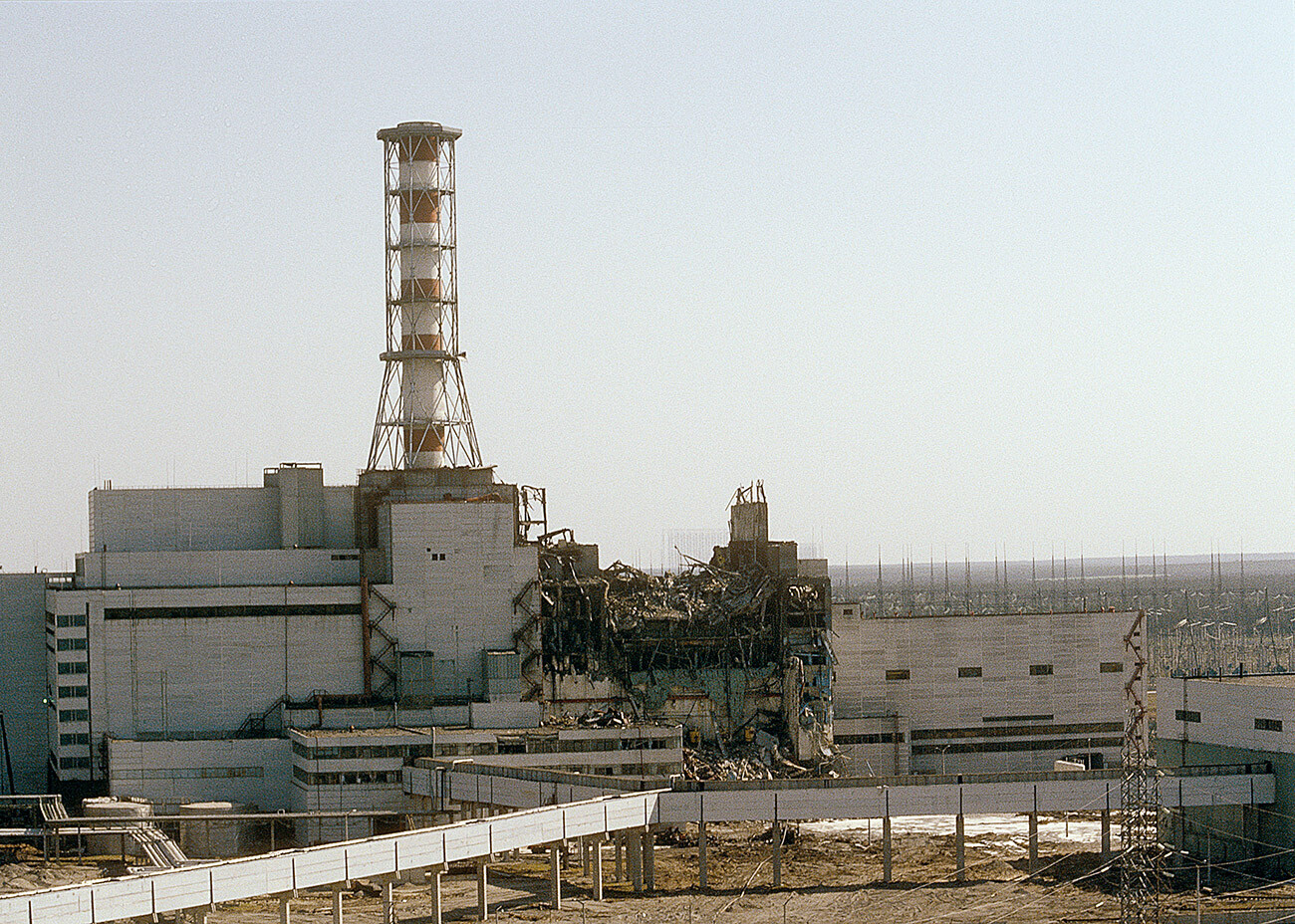 The Chernobyl Nuclear Power Station as seen from the fourth power unit, after an accident on April 26, 1986.

But, the world certainly remembers ‘Gorby’ as the man who stopped the arms race and who turned the ‘Evil Empire’ into an ally in preventing geopolitical and environmental cataclysms. It is he who proclaimed “new foreign policy thinking”, began the process of German reunification and the withdrawal of Soviet troops from Afghanistan. It is he who expressed the idea, which sounded like an absolute utopia, to eliminate nuclear weapons by the year 2000, create international security systems and then sign the START-1 treaty and the INF agreement with the United States. Opponents reminded him more than once of the meeting in Malta, where the Cold War ended at the diplomatic level, and accused him of a deflection to the West. Gorbachev only said: “We want to be understood. <…> It does not mean to become exactly the same as others.” It meant to become understandable to others. 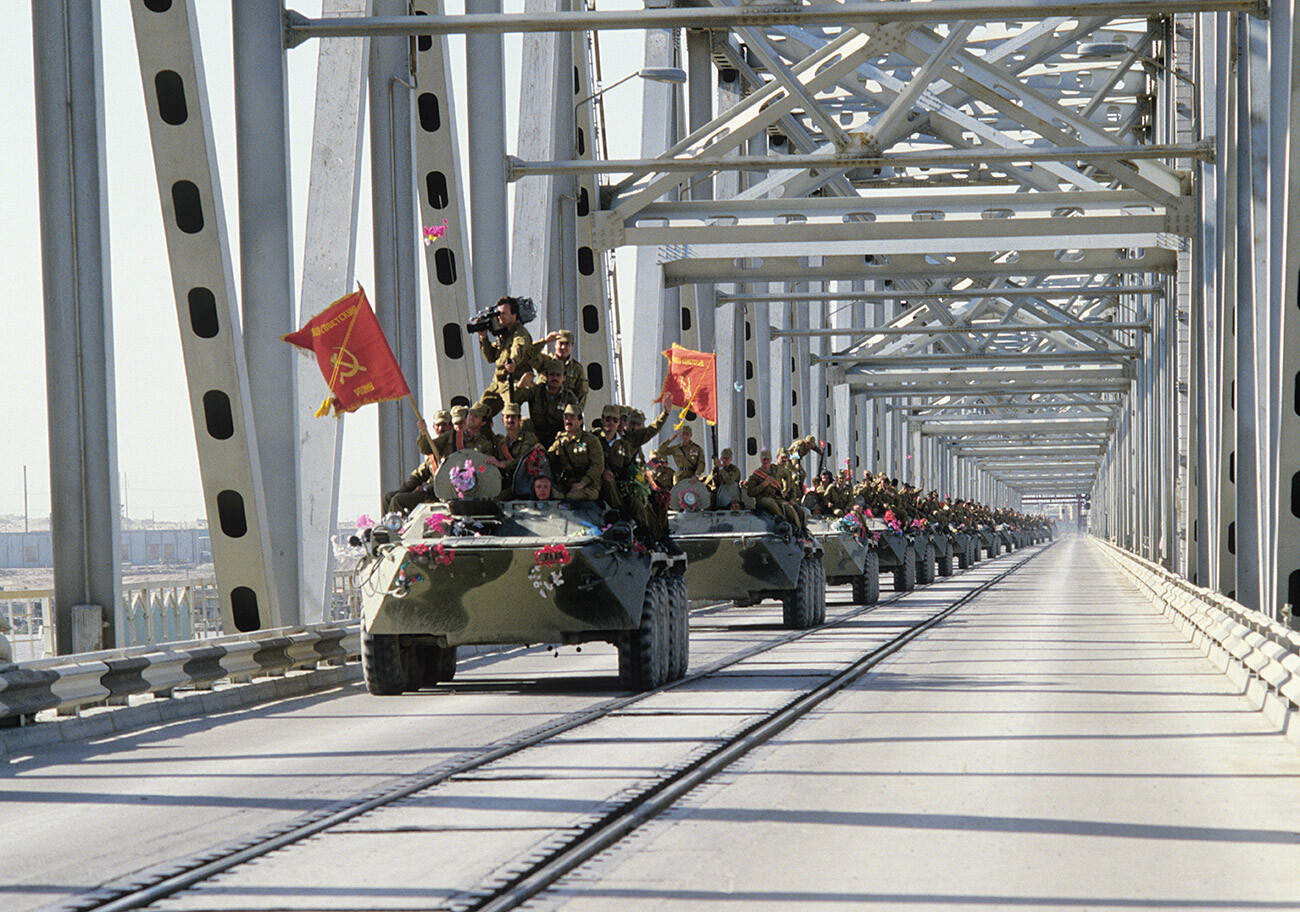 Gradual withdrawal of limited contingent of Soviet forces from Afghanistan, 1988

After his resignation, he continued to monitor the development of the country, established the Gorbachev Foundation and the International Green Cross and tried to return to big politics, but in the presidential election he gained only 0.51% of the total vote (the people never forgave him for the collapse of the Soviet Union). The only president of the USSR predictably went into sharp opposition to the first president of the Russian Federation, Boris Yeltsin, then supported his successor Vladimir Putin (albeit, not for long) and engaged in introspection and admission of mistakes. 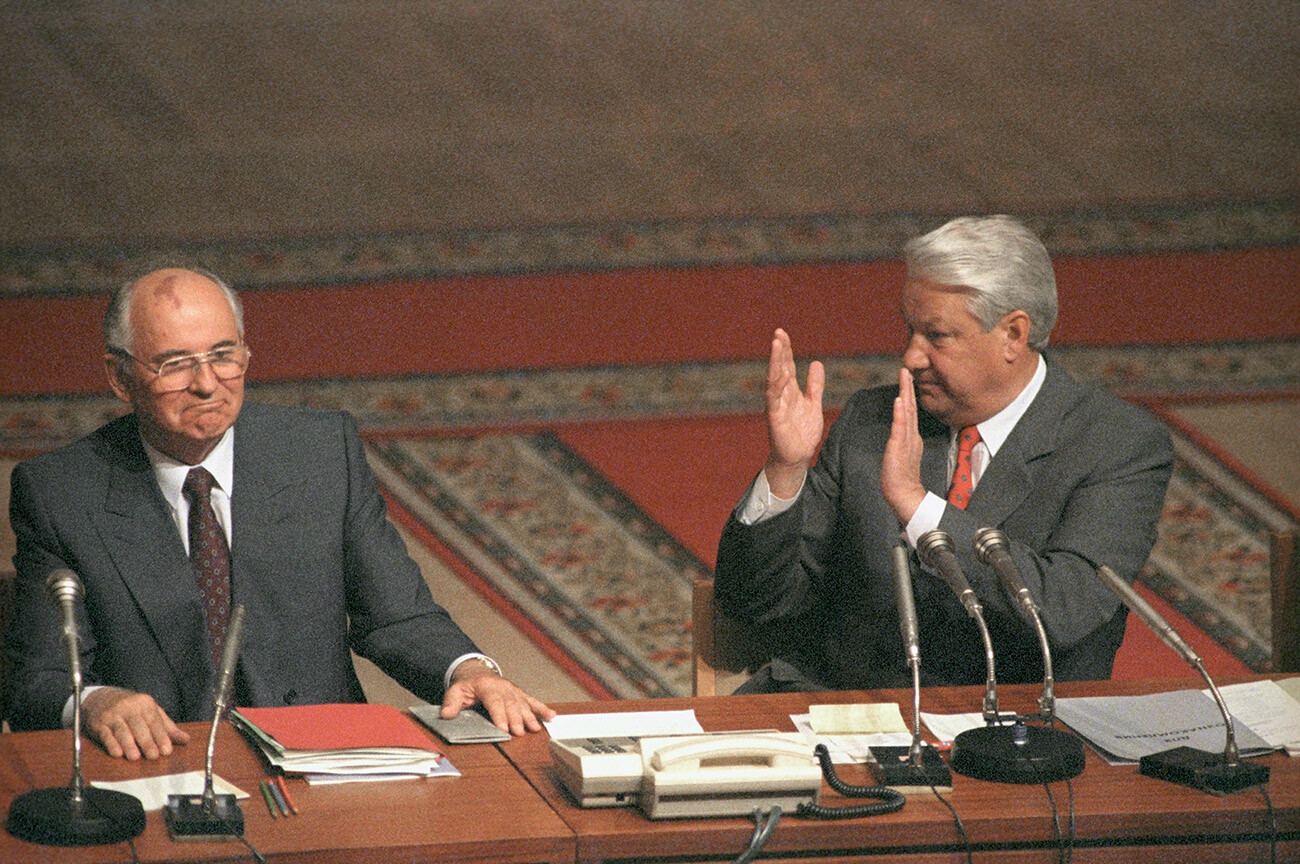 Mikhail Gorbachev, General Secretary of the Communist Party of the Soviet Union, left, and Politburo member Boris Yeltsin seen during a meeting at the Government House in Moscow, 1990

“Perestroika has won! This is what I lost as a politician,” he summed up in 2009. Although, perhaps, he formulated and voiced one of the main conclusions for himself back in 1991: “Life is much richer and more complex than even the most perfect plans to make it better. It ultimately takes vengeance for attempts to impose abstract schemes, even with the best of intentions.”

As the thousands of words of condolence continue to pour in, we’ve highlighted some of the more poignant ones by prominent figures who knew or were inspired by Mikhail Gorbachev. 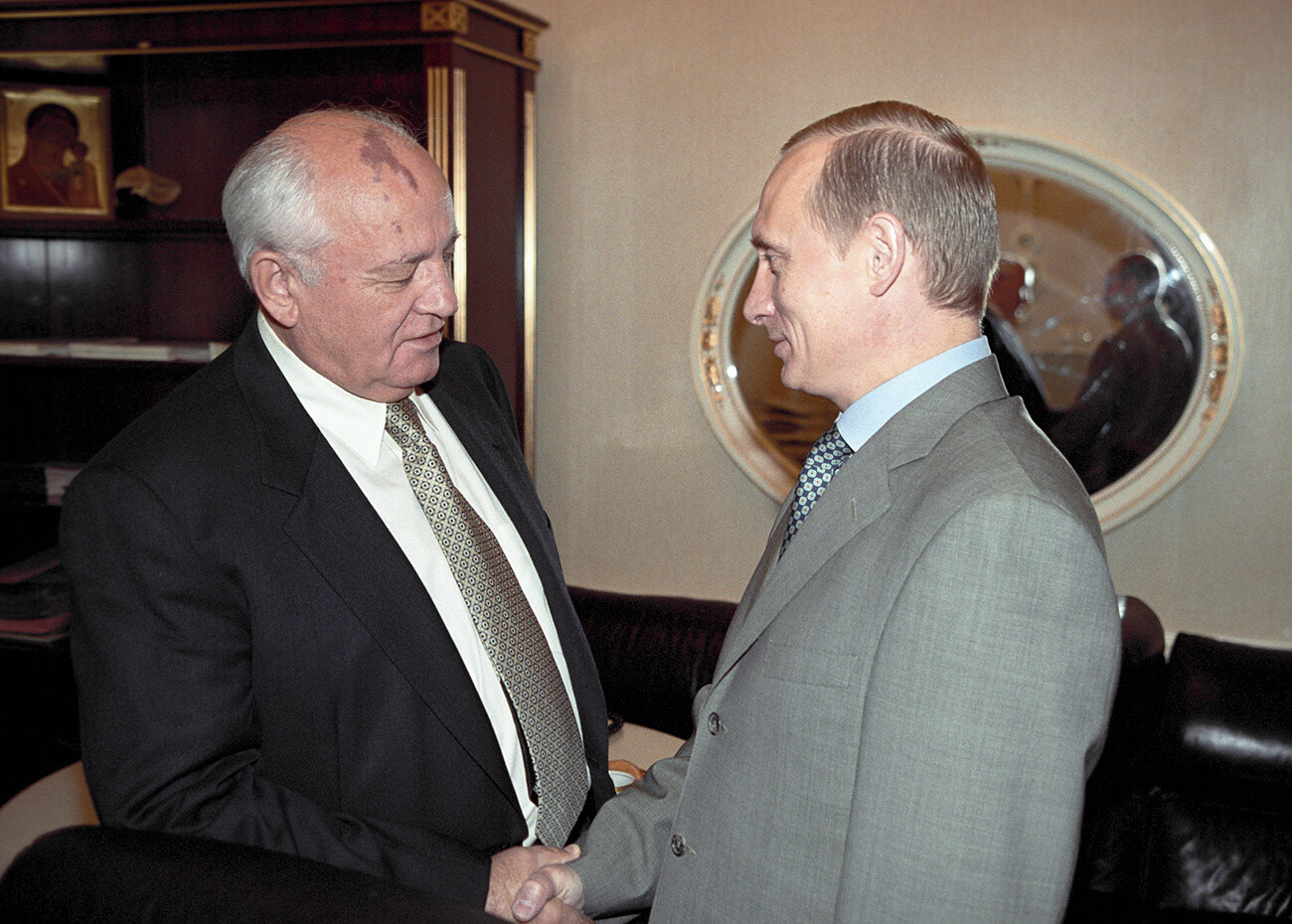 Russian President Vladimir Putin, in a telegram to family and friends:

“Please accept our deepest condolences on the death of Mikhail Gorbachev.

Mikhail Gorbachev was a politician and statesman who had an enormous influence on the course of world history. He led our country during complex, dramatic changes, large-scale foreign policy, economic, social challenges. He deeply understood that reforms were necessary and he tried to offer his own solutions to the pressing problems.

I would also like to make special mention of the extensive humanitarian, charity and educational activities that Mikhail Gorbachev carried out in recent years.

Once again, please accept my sincere words of sympathy and support in connection with your loss.” 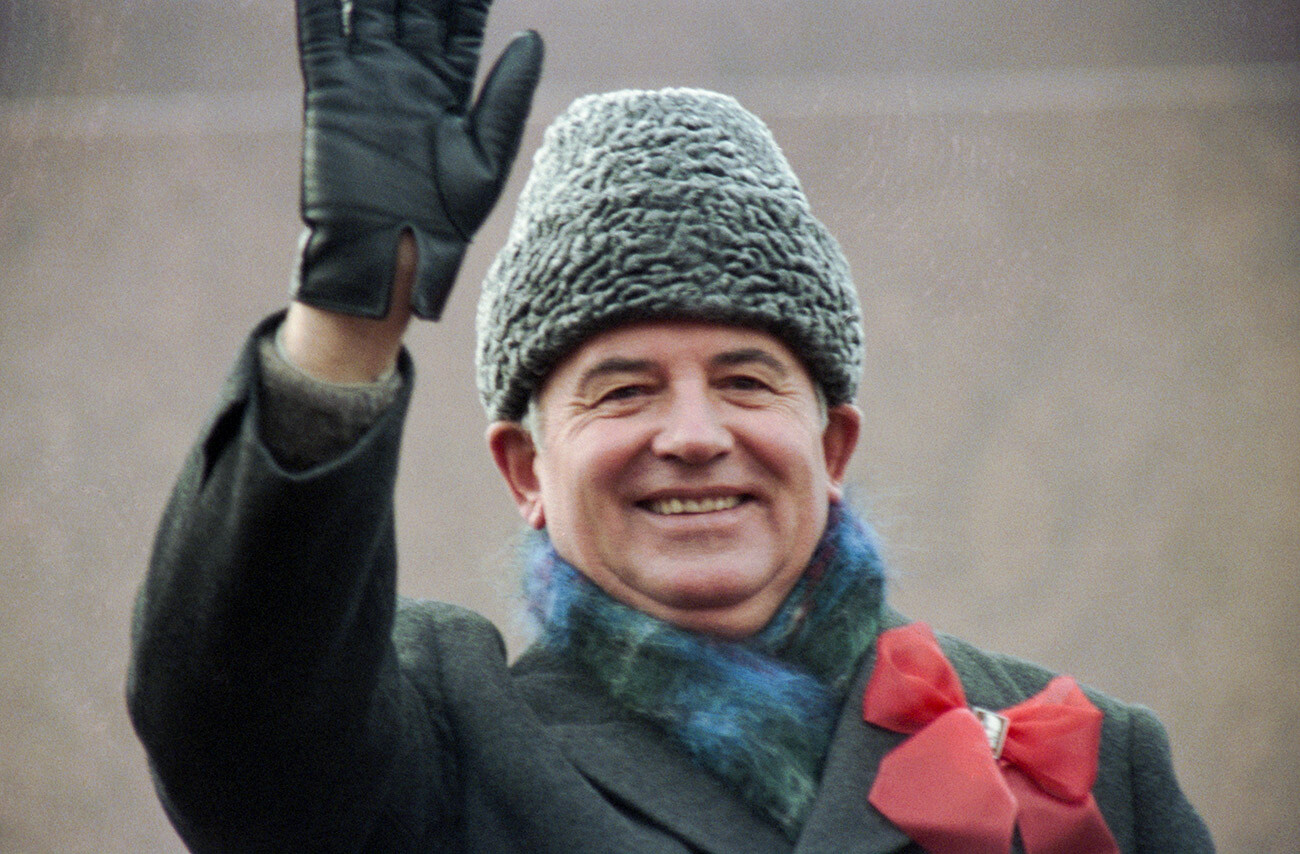 Mikhail Gorbachev on the tribune of the Lenin Mausoleum during celebration of the 69th anniversary of 1917 Revolution, 1986

Mikhail Sergeyevich [Gorbachev] stood at the origins of many transformations, became the embodiment of global changes that took place in Russia and the world. He has always fervently and reasonably defended his position and supported his country.

Mikhail Gorbachev was a one-of-a kind statesman who changed the course of history. The world has lost a towering global leader, committed multilateralist and tireless advocate for peace. I’m deeply saddened by his passing. 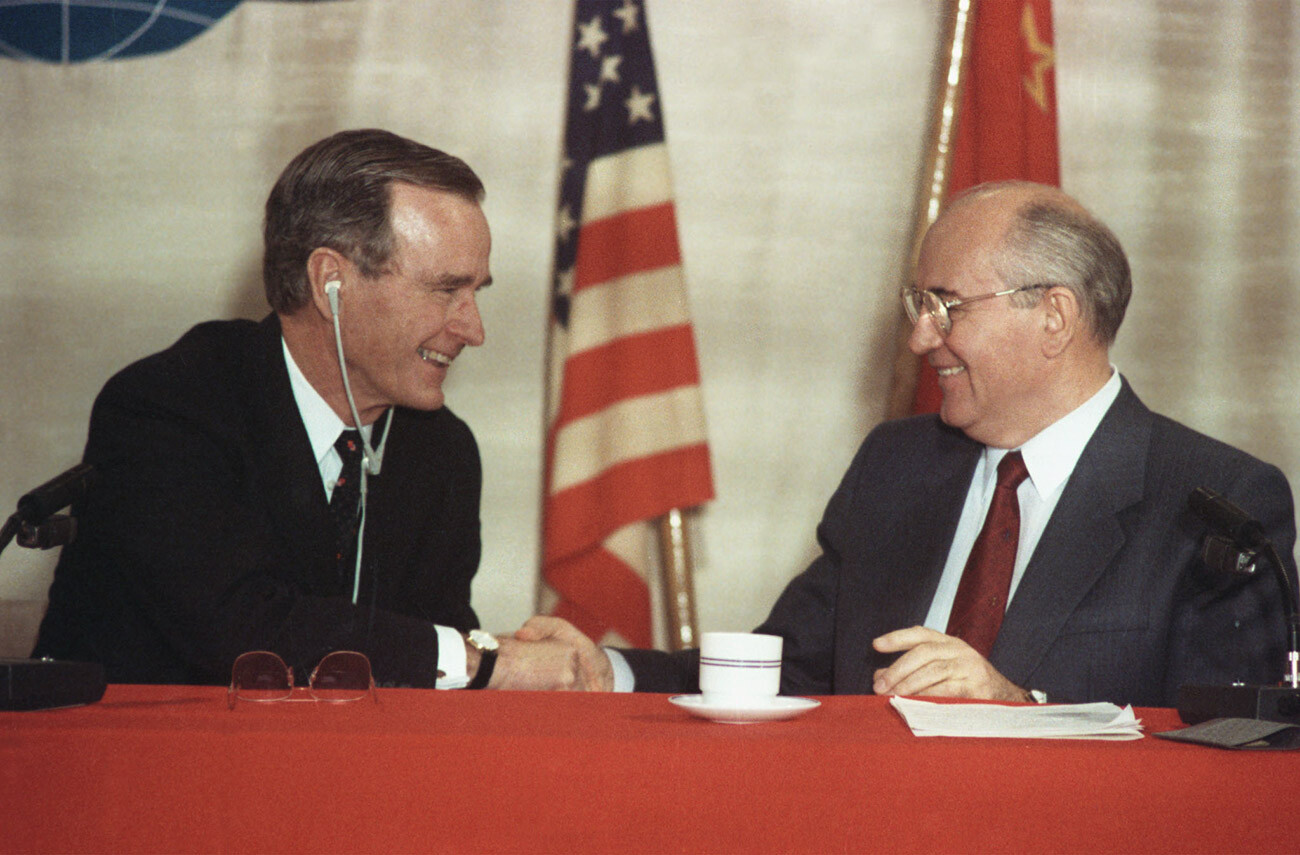 Mikhail Gorbachev was a man of remarkable vision.

These were the acts of a rare leader – one with the imagination to see that a different future was possible and the courage to risk his entire career to achieve it. The result was a safer world and greater freedom for millions of people.

Even years after leaving office, he was still deeply engaged. When Mr. Gorbachev visited the White House in 2009, he and I spoke for a long time about our countries’ ongoing work to reduce U.S. and Russian nuclear stockpiles. It was easy to see why so many worldwide held him in such high esteem.

We send our deepest condolences to his family and friends, and to people everywhere who benefited from his belief in a better world.

Former U.S. Secretary of State James Baker III, who negotiated with Gorbachev in the final years of the Cold War:

“History will remember Mikhail Gorbachev as a giant who steered his great nation towards democracy. He played the critical role in a peaceful conclusion of the Cold War by his decision against using force to hold the empire together <…> The free world misses him greatly.” 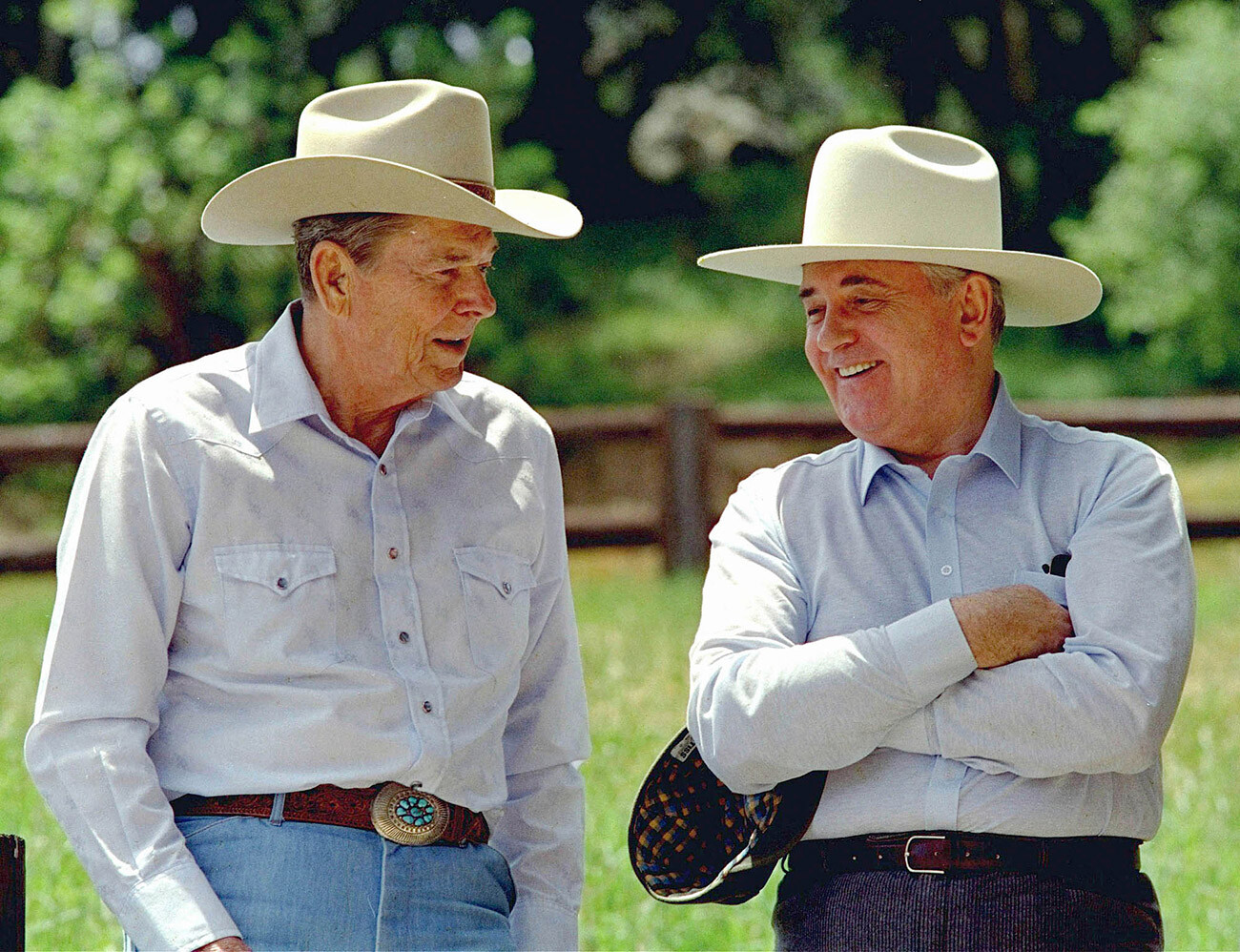 “The Reagan Foundation and Institute mourns the loss of the former Soviet leader Mikhail Gorbachev, a man who once was a political adversary of Ronald Reagan’s who ended up becoming a friend. Our thoughts and prayers go out to the Gorbachev family and the people of Russia.”

“Mikhail Gorbachev performed great services but was not able to implement all of his visions. The people of eastern Europe and the German people, and in the end the Russian people, owe him a great debt of gratitude for the inspiration, for the courage in coming forward with these ideas of freedom. He will still be remembered in history as a man who started historic transformations that were to the benefit of mankind and to the Russian people.” 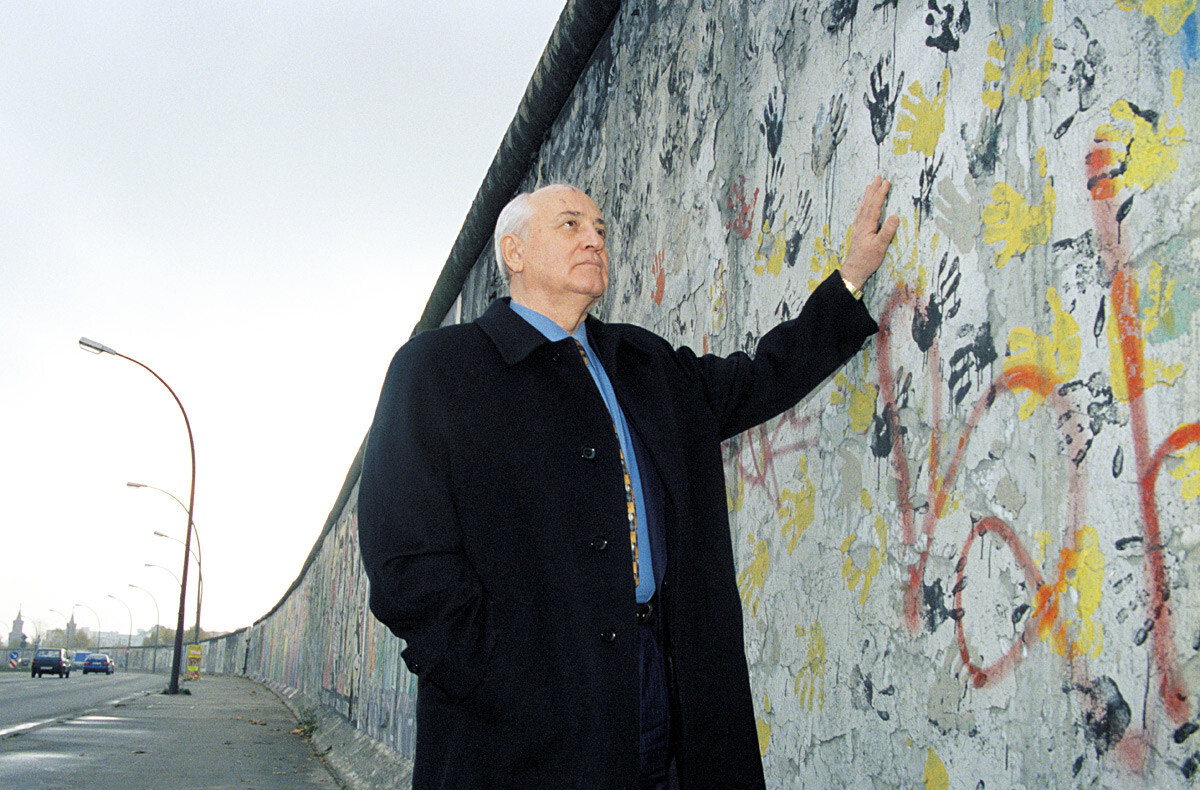 Mikhail Gorbachev stands next to the Berlin Wall memorial

French President Emmanuel Macron, on Twitter, in Russian and French:

“My condolences on the death of Mikhail Gorbachev, a man of peace whose decisions opened the way to freedom for Russians. His commitment to peace in Europe changed our common history.”

“I’m saddened to hear of the death of Gorbachev. I always admired the courage & integrity he showed in bringing the Cold War to a peaceful conclusion.” 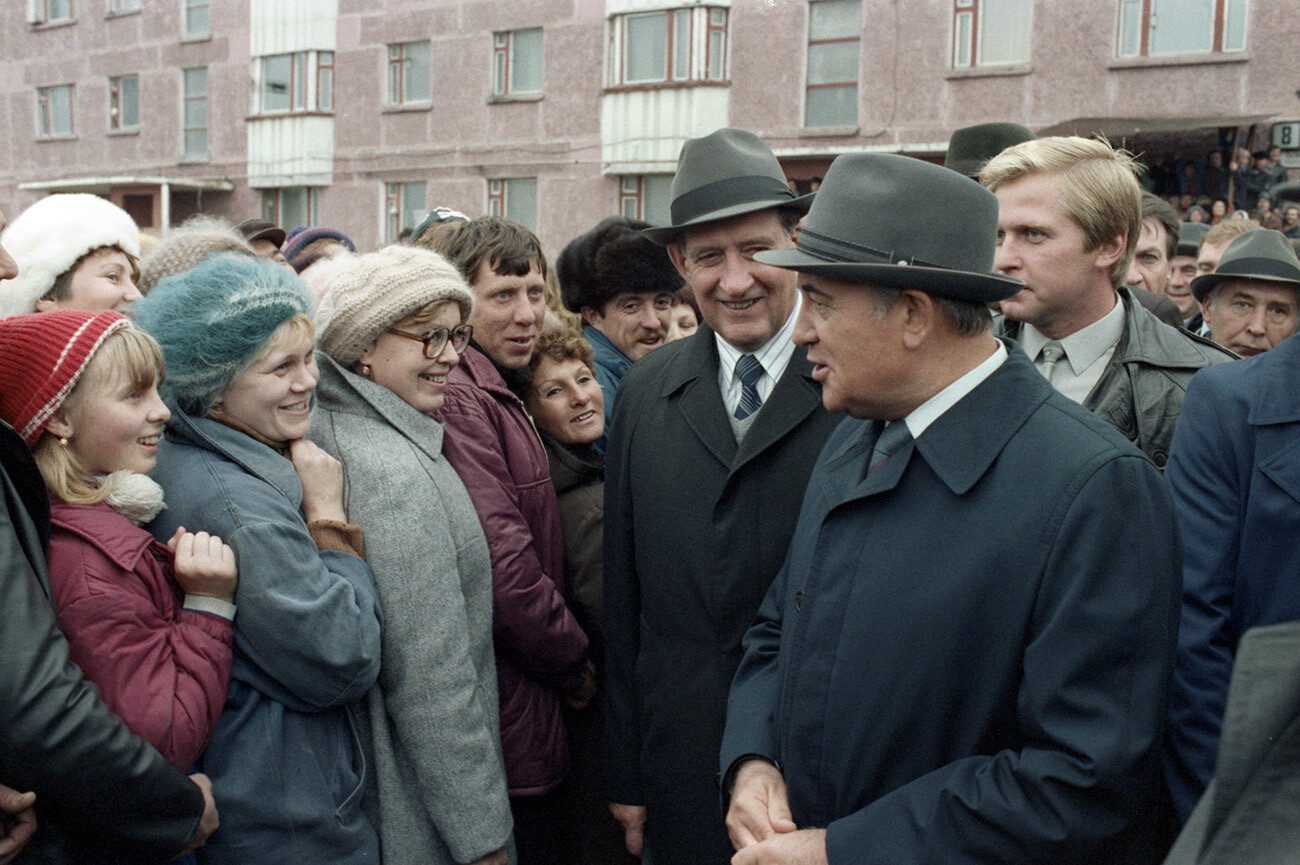 Mikhail Gorbachev (R front) meets with residents of the city of Novy Urengoy, 1985

“Mikhail Gorbachev was a trusted and respected leader. He played a crucial role to end the Cold War and bring down the Iron Curtain. It opened the way for a free Europe.

This legacy is one we will not forget.

I am saddened to hear of the passing of Mikhail Gorbachev. He was a man who tried to deliver a better life for his people. His life was consequential because, without him and his courage, it would not have been possible to end the Cold War peacefully. 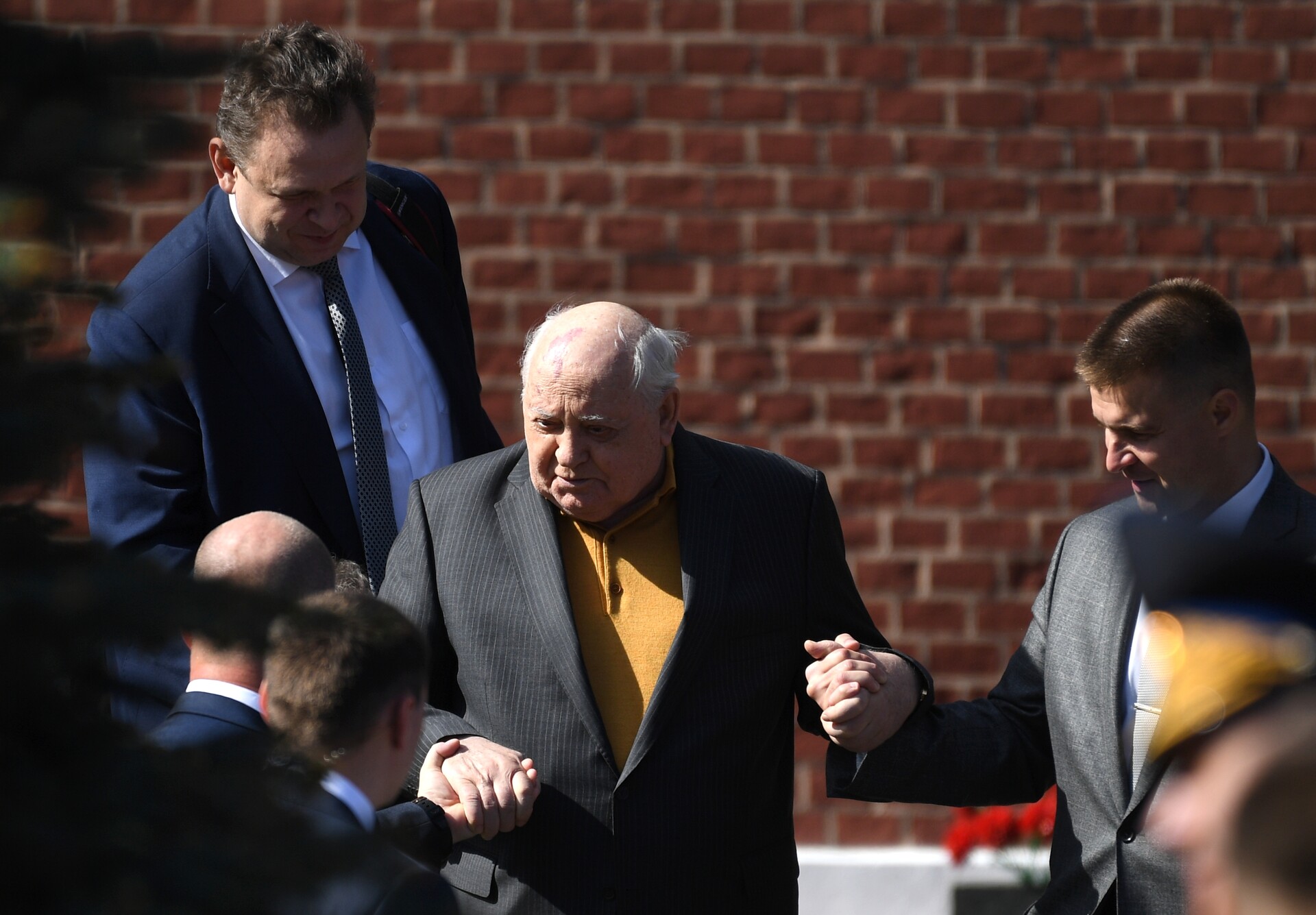 Mikhail Gorbachev before the military parade to mark the Victory Day, 2018