How the fall of the Berlin Wall began 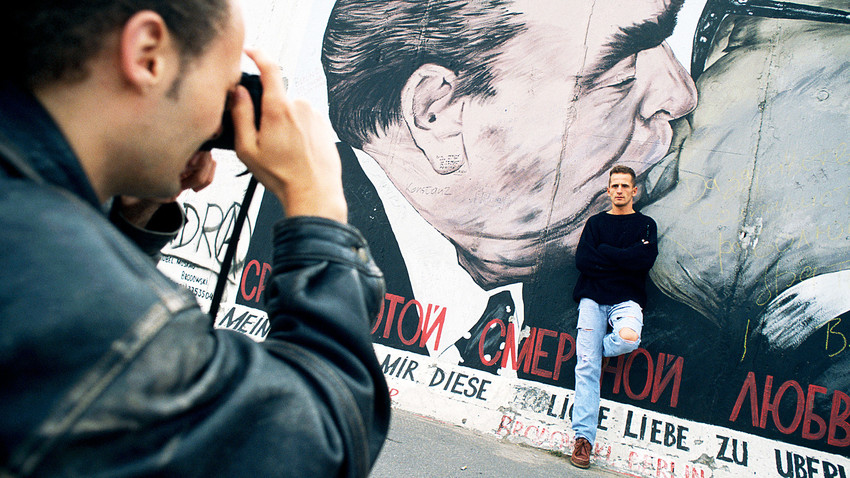 Getty Images
The initial border opening was met with Moscow’s apparent ‘approval’, much to the surprise of East German leaders.

At 9:20 p.m. on Nov. 9, 1989, the border crossing gate at the Bornholmer Strasse checkpoint was raised, essentially heralding the fall of the Berlin Wall and the beginning of German reunification. Few people know that the event was preceded by a series of secret consultations between East German and Soviet leaders.

"The GDR [East German] leaders were perfectly aware of the fact that the time had come to ease the prohibitive procedure for leaving the country," Igor Maksimychev, senior researcher at the Institute of Europe of the Russian Academy of Sciences, and in 1987-1992 minister-counsellor at the Soviet/Russian embassy in Berlin, told RBTH. "On Nov. 7, Egon Krenz, General Secretary of the Socialist Unity Party of Germany [SED], and Oskar Fischer, GDR Minister of Foreign Affairs, informed Soviet ambassador Vyacheslav Kochemasov that a new draft law had been prepared on exiting the country.”

East German authorities wanted to open a special checkpoint on the border with West Germany through which citizens who wished to move to the West could do so freely.

“Krenz and Fischer asked for Moscow's opinion on the matter, and in the morning of Nov. 9, Ambassador Kochemasov replied that the Soviet side had no objections," added Maksimychev.

That very same evening East German Politburo member Günter Schabowski gave a live news conference devoted to a plenary session of the SED Central Committee, and he mentioned that new regulations were being introduced allowing GDR citizens to travel freely to West Germany. Asked by an Italian journalist when the new regulations would come into effect, Schabowski replied, with some hesitation, that they took effect "immediately, without delay."

Winfried Petch recalls how crowds of East Berliners immediately headed for the nearest checkpoints and stormed them. At least 20,000 people crossed the border within an hour through the Bösebrücke bridge without any identity checks. At this time, however, the border guards were still stamping passports.

Winfried still has his GDR passport, which bears the stamp of the border guard service "Nov. 9, 1989". The stamp was placed right on top of his photo, which meant at the time that he was not supposed to be allowed back into East Berlin. "Together with my wife, we stood by the border crossing gate, and I said to her: ‘Let's go across and then come back.’ Now this stamp is a relic of that time. My wife and I are proud of it." 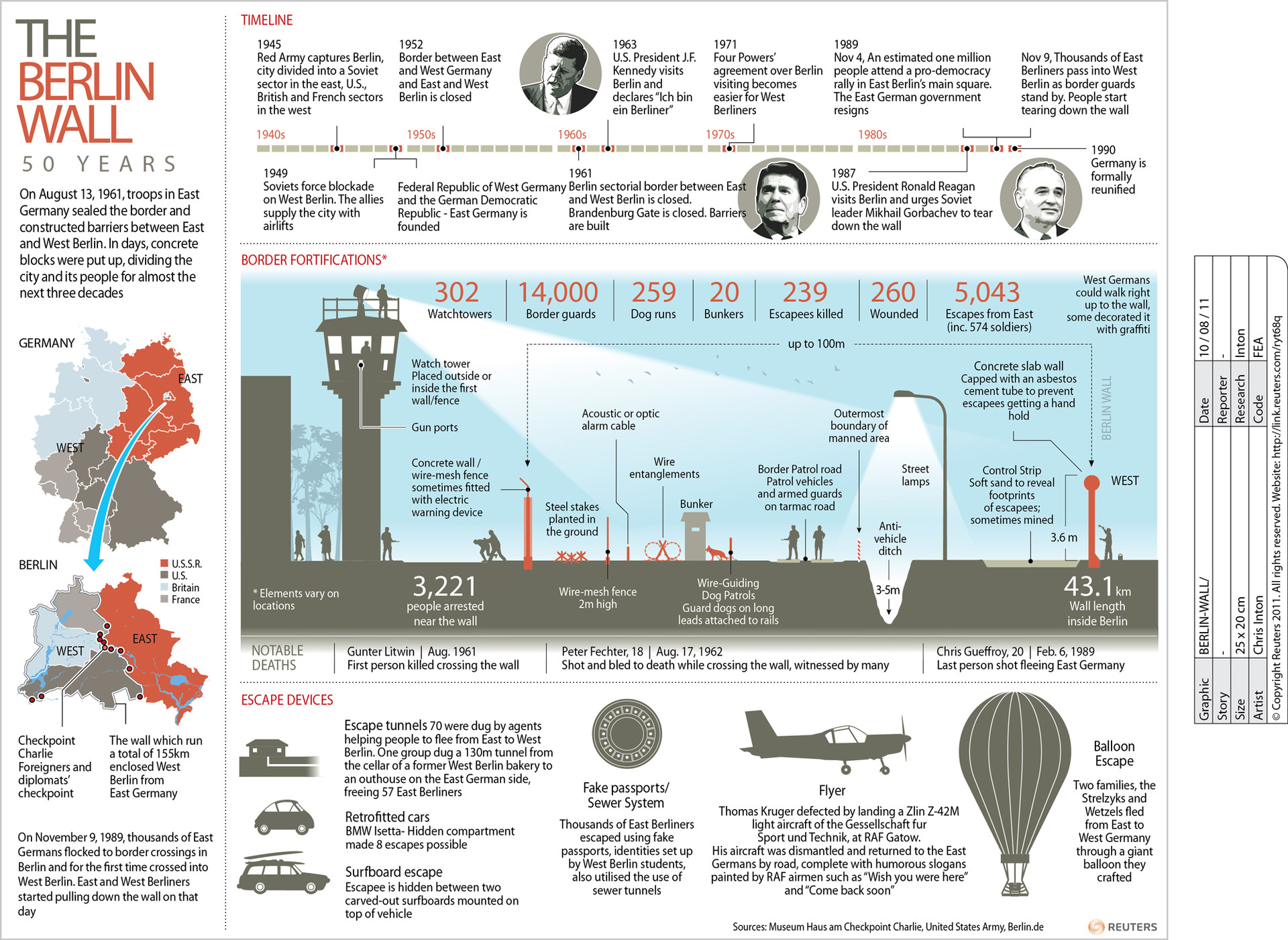 That night, Helga Krauze was also on the Bösebrücke Bridge, and a quarter of a century later she can't hold back the tears: "I had lived in the area for about 20 years; every day I saw the bridge but couldn't even dream of going onto it. So I was standing on the bridge, crying. People who lived on Osloer Strasse, which is on the western side, came up to me with champagne and we drank it together."

Judging by the accounts of participants in those events, there was ecstatic joy on both sides of the Berlin Wall, and they thought that "a miracle had happened - the strip of death in the center of Europe was gone."

More than 100,000 East Germans had tried to cross the Berlin Wall. It is still not known precisely how many were killed during those attempts. According to researchers at the Potsdam Center for Contemporary History, 138 people can definitely be established as having fallen victim to the wall.

The wall, with its guards armed with automatic rifles on watch towers, machine gun nests, barbed wire, anti-tank "hedgehogs", mines and electric alarm systems, had filled people with terror for 28 years. Now, it was being demolished piece by piece; not immediately, but some time later. Winfried and his neighbors smashed it with hammers and chisels. Some rammed it with lorries and road rollers. Nowadays, fragments of the concrete wall are excellent souvenirs for people known as "wall woodpeckers" in Berlin. It is from them that the state now vigilantly protects the remaining fragments of the "20th century’s wall of shame." 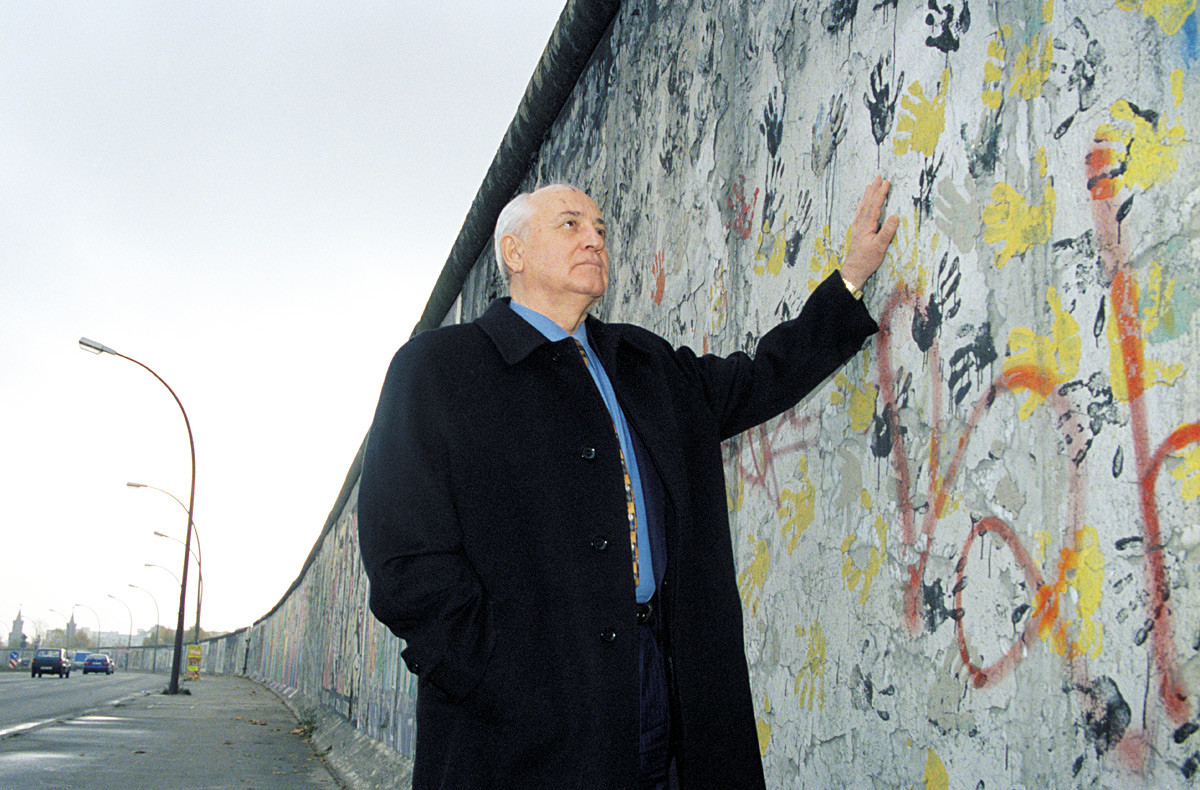 Mikhail Gorbachev, laureate of the 1990 Nobel Peace Prize, stands next to the Wall

"The largest remaining section of the wall - 999 meters long - is located on Mühlenstrasse," Berlin tour guides explain. "What was in the past a formidable and impregnable stretch of the Cold War border has turned into an open-air art gallery. Artists and architects have restored graffiti painted at the time of German reunification on the wall slabs."

The graffiti-daubed wall is the main image of 1989, a historic year for Germans as well as the rest of mankind. There, Russian artist Dmitri Vrubel painted the famous kiss on the lips of Soviet and East German leaders Leonid Brezhnev and Erich Honecker.

The artist said that he came to Berlin for a completely different reason. "It all happened by accident. An acquaintance who invited me to Berlin with an exhibition lived 500 meters from a section of the wall on which artists were allowed to paint. The area was grim and scary. East Berlin was empty anyway, with everyone from there having fled to the West and people leaving behind their apartments and furniture," Vrubel says.

The restoration in 2009 of the graffiti that made Vrubel world famous looked more like a street performance. "For three days I couldn't start the work and completed it only a month later. I’d draw one letter a day. I’d come and sit down to work, and immediately fifteen hundred people and journalists would turn up. I’d hand out autographs and give interviews," the artist recalls. "The old graffiti survived only on postcards and magnets. I had to replicate a work of art that didn't exist any more, but was in every Berliner's head."