How the USSR fell in love with Africa 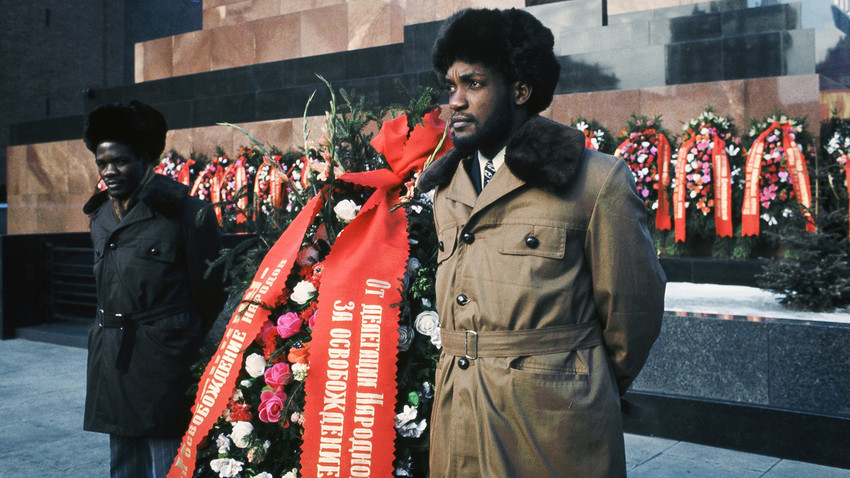 An Angolan delegation laying flowers to the Mausoleum of Lenin in the USSR.

A.Kovtun, B. Korzin/TASS
After colonial empires in Africa collapsed, Moscow did all it could to make “African comrades” embrace socialism – but the romance didn’t last long.

“During yet another crisis in Angola we used to transport weapons there via planes and ships, there were tons of it,” one Russian military specialist said while describing how much assistance the USSR provided to Angola’s socialist government during the civil war in the 1970s.

It’s hard to overestimate how much attention Moscow paid to Angola. According to Sergei Kolomnin, a former military interpreter who served there in 1975-1991, 105 generals and admirals and 7,211 officers from the USSR were present in Angola as military advisors. 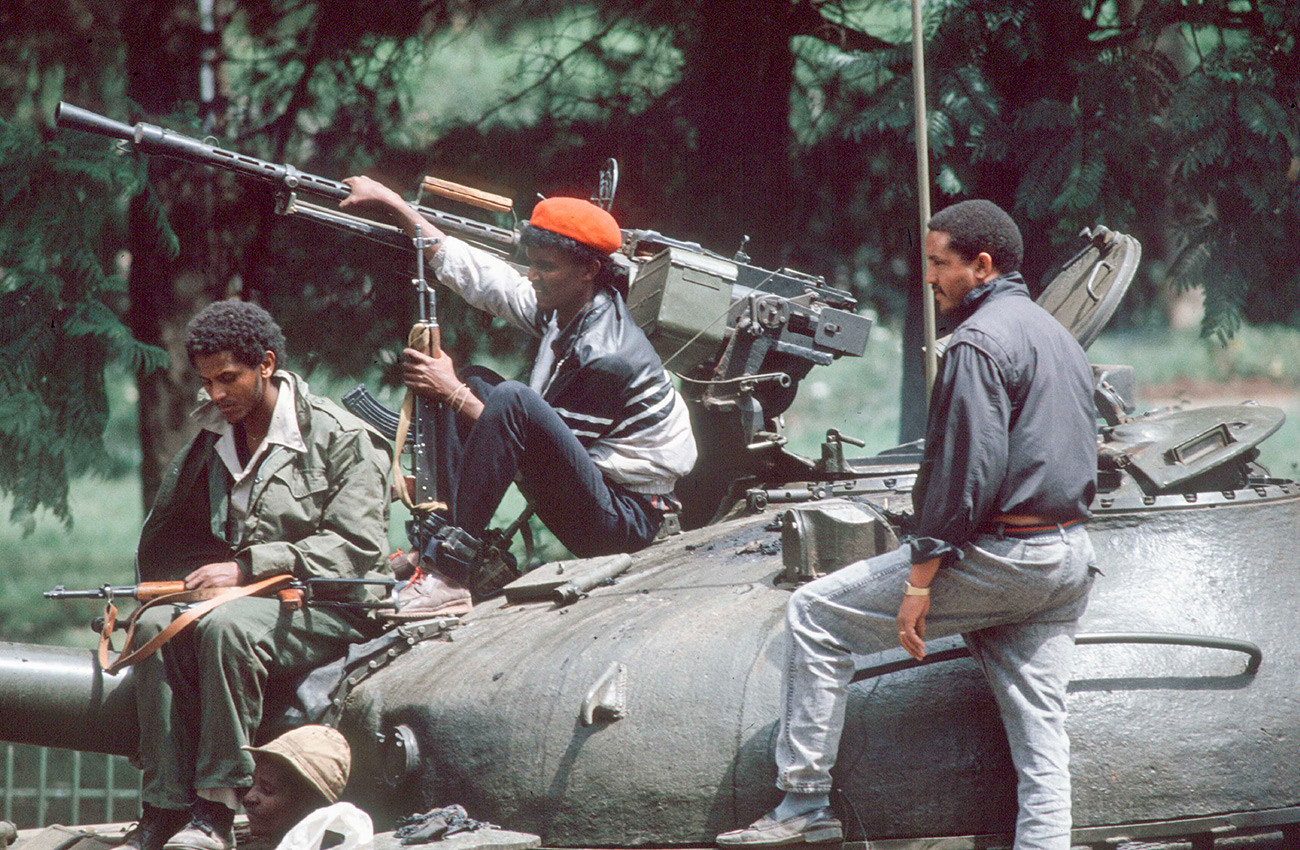 Angola wasn’t the only country in Africa embraced by the Soviet Union. From the 1960s to the late 1980s Moscow sent officers, engineers, and technical specialists to help Africans build (or rebuild) their infrastructure; welcomed African students in Soviet universities; and spent billions of dollars directly on financial assistance.

Not much was paid back – as Vladimir Putin noted in October 2019, Russia had canceled $20 billion in African debts to the USSR. So why did the USSR help the Africans and why did it receive so little in return? 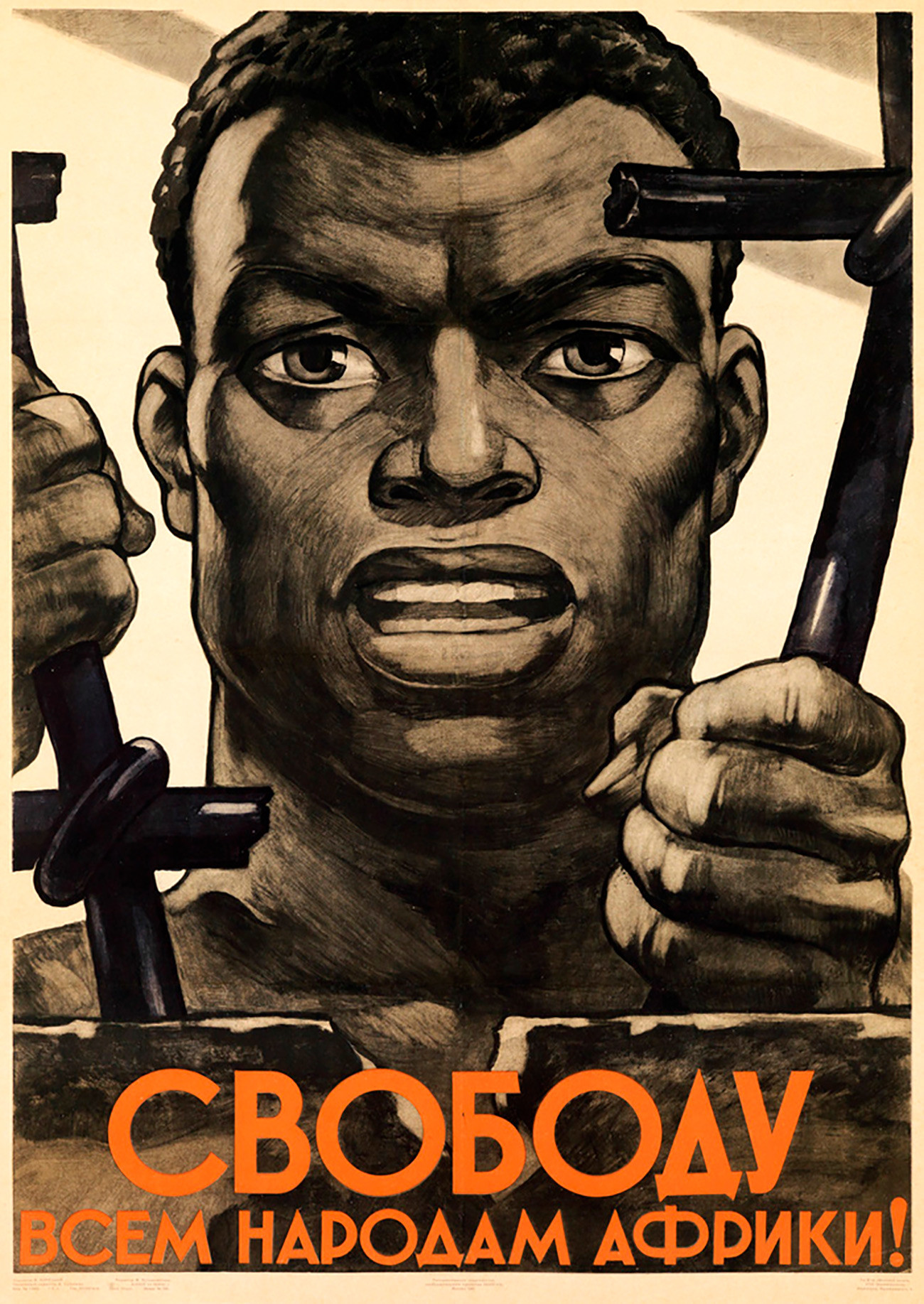 "Freedom to all African nations!", a Soviet propaganda poster.

“Africa started to become a matter of concern for some Russians during the 19th century and the Second Boer War,” historian Irina Filatova told Kommersant. “The next period of Africa obsession began with the Comintern [an international union of the communist parties led by the USSR, which was active 1919-1943]. It was interested in the communist movement in South Africa and insisted on creating there ‘an independent aboriginal republic’, without explaining precisely what was meant by that.”

Until 1958-1960, though, the USSR didn’t pay much attention to Africa and the issues of the continent, being too occupied with maintaining its industry and safety and fighting in Europe during World War II. Several students from Africa studied in Moscow, some money was sent to African communists, but it really was a drop in an ocean. “Moscow paid little attention to Africa’s specifics for they didn’t really know Africa at all,” Filatova explained. 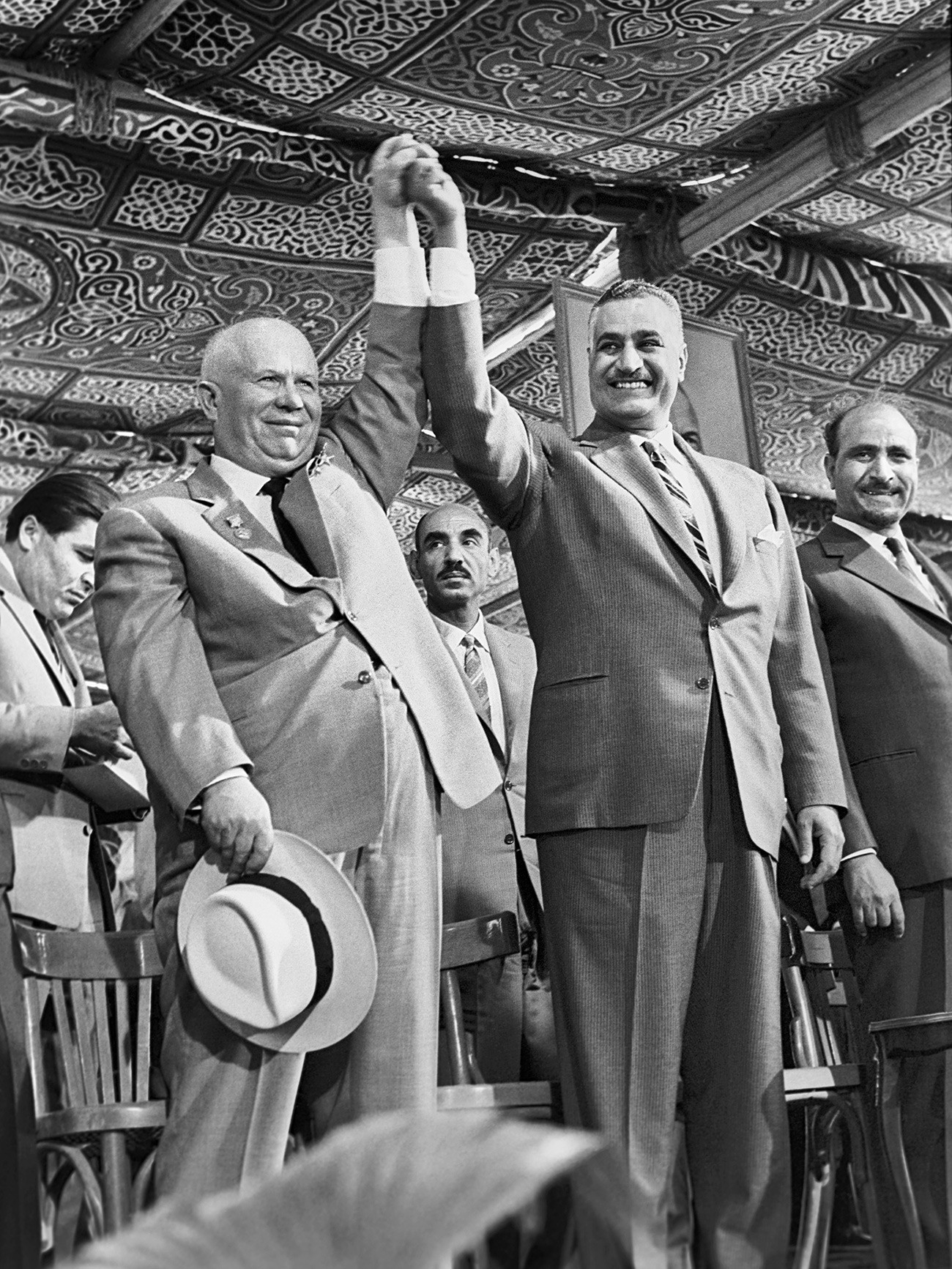 Gamal Abdel Nasser of Egypt was the first African leader to establish friendly relations with the USSR.

Everything changed in the 1940s–1950s when European powers (mainly the UK and France) began to lose control of their former colonies. With new states appearing on the map and left-wing movements on the rise worldwide, the USSR tried as hard as possible to paint Africa red.

They started with the Arab countries in the northern part of the continent: for instance, Gamal Abdel Nasser of Egypt (president 1956–1970) was one of the USSR's best friends and enjoyed Moscow’s support during Arab conflicts with Israel. Egypt was the first African country with which the USSR signed a trade treaty, followed by Tunisia (1957), Morocco (1958), Ghana, Ethiopia and Guinea (all in 1959). 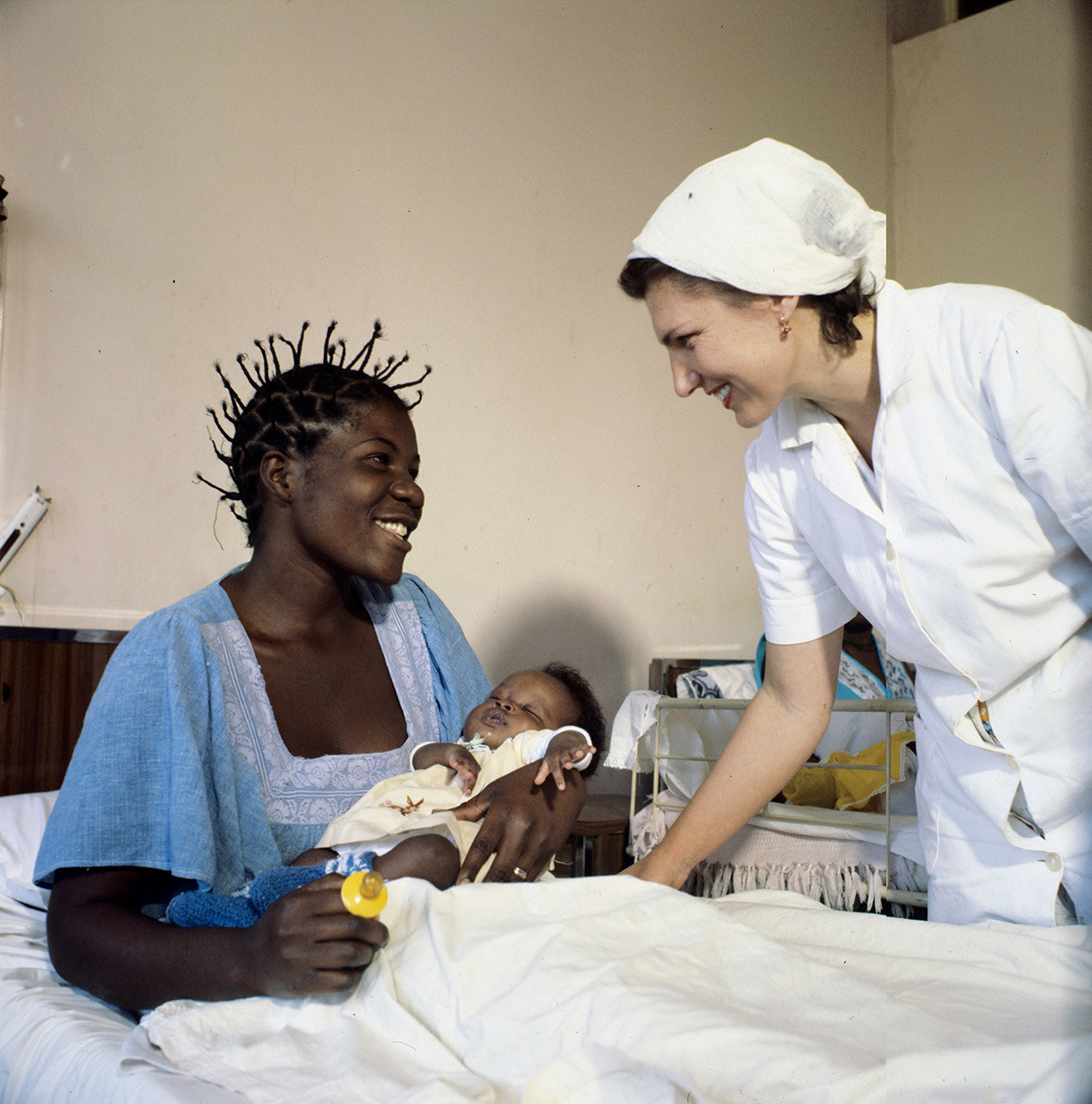 Among other things, the USSR was helping Africa with medics. A Soviet midwife in Lubango, Angola. 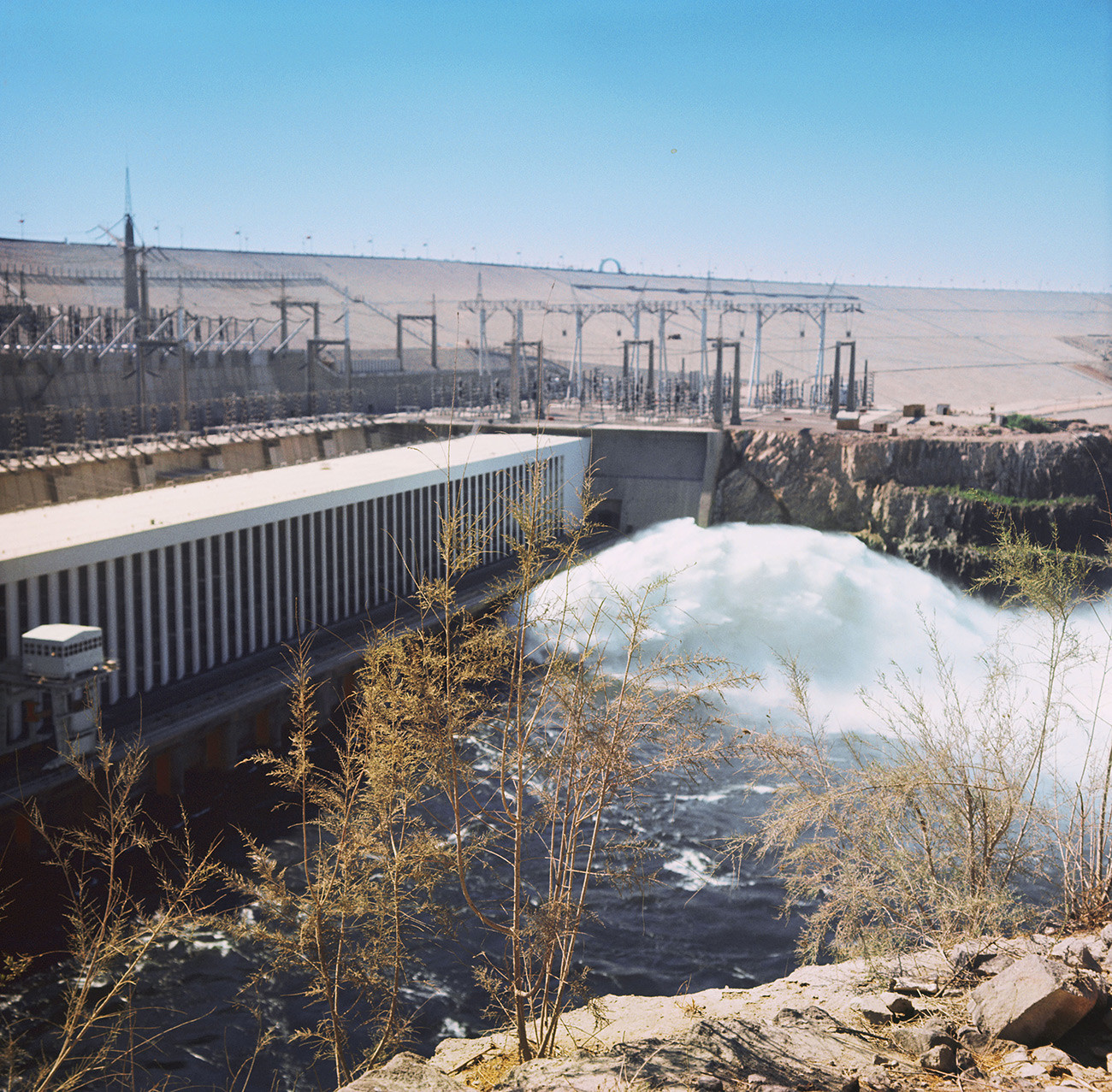 The Aswan Dam of Egypt, built by the Soviet specialists.

Alexey Salnikov, a high-ranking KGB officer, recalled Khrushchev saying: “We are basically selling communism to Africa. But in fact, we have to pay the Africans to buy it.” Khrushchev meant that most Africans were not ready to embrace communist ideas without serious economic assistance. Everything worked just as Karl Marx predicted: economy defines politics.

The Soviets signed cooperation treaties with 37 African countries and participated in building some 600 enterprises, factories and plants. Among them, for instance, are the Aswan Dam, crucial for Egypt’s agriculture and energy supply, the Capanda hydroelectric dam, which provides most of Angola with electricity, plants in Congo and Nigeria and other major infrastructure projects across the continent.

Also, the USSR provided many of its African clients with financial credits and sometimes with selfless financial assistance. Later, such generosity would become an object of criticism – as it really didn’t help much, as it turned out. 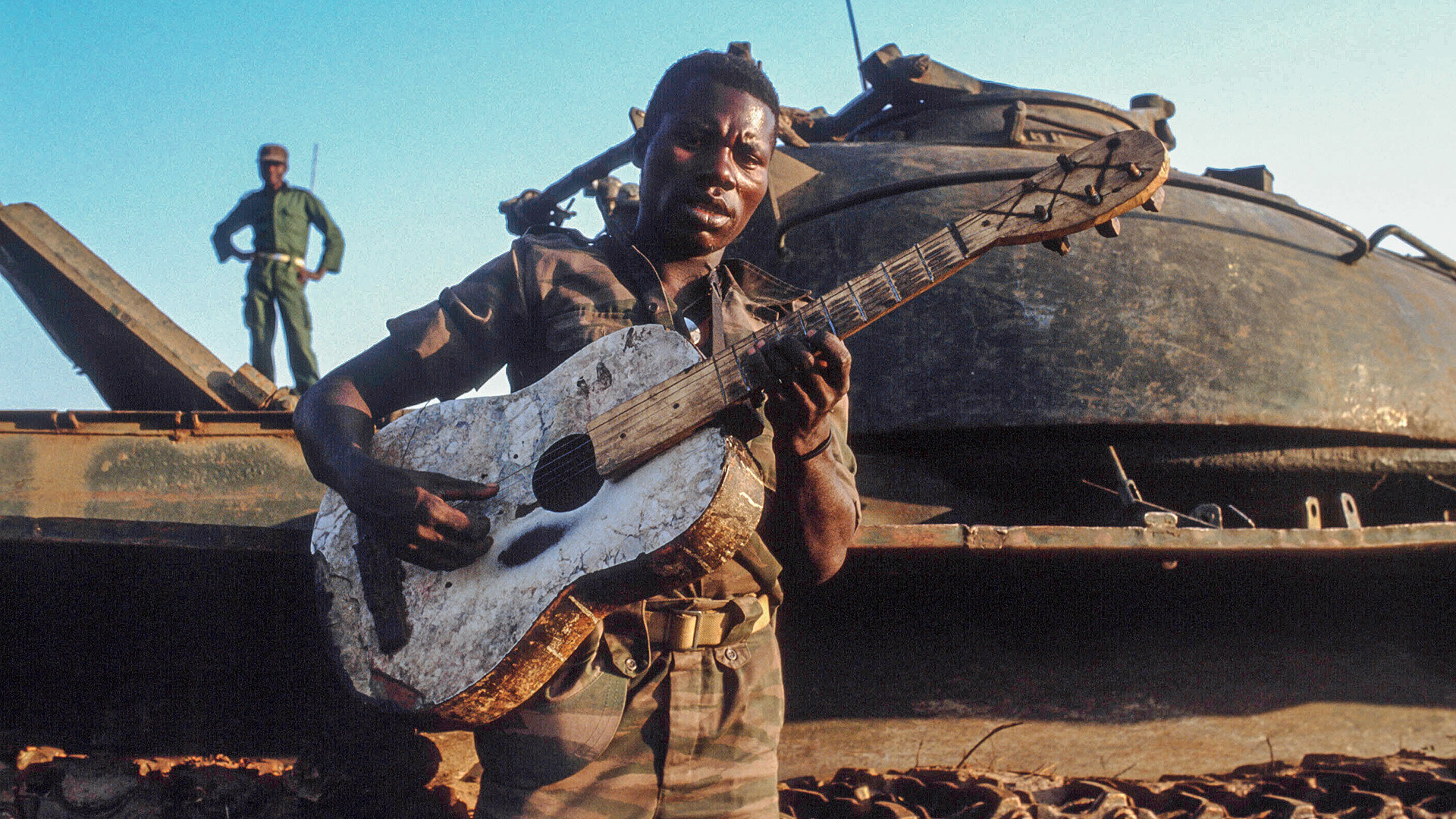 An African soldier against the background of a Soviet T-34 tank.

Soviet “military advisors” participated in African wars unofficially - their work was classified. They played an important role in at least three wars:

- The Angolan Civil War (1975–1992), where the USSR supported the left-wing People's Movement for the Liberation of Angola;

- The Ogaden War between Ethiopia and Somali (1977-1978). This was a tricky one: Moscow had to choose between two officially pro-Socialist states that clashed over the region of Ogaden in East Africa. The Soviets preferred Ethiopia, which forced the Somalis to side with the Americans.

In each of these wars, African countries were basically a chessboard where Moscow and Washington supported different parties. The business was deeply secret. “No one sent the Soviet army there,” explained Sergei Kolomnin. “But our advisors, our specialists, paramedics, pilots… all were there.” The military help was palpable: the pro-Soviet side won each of these conflicts. 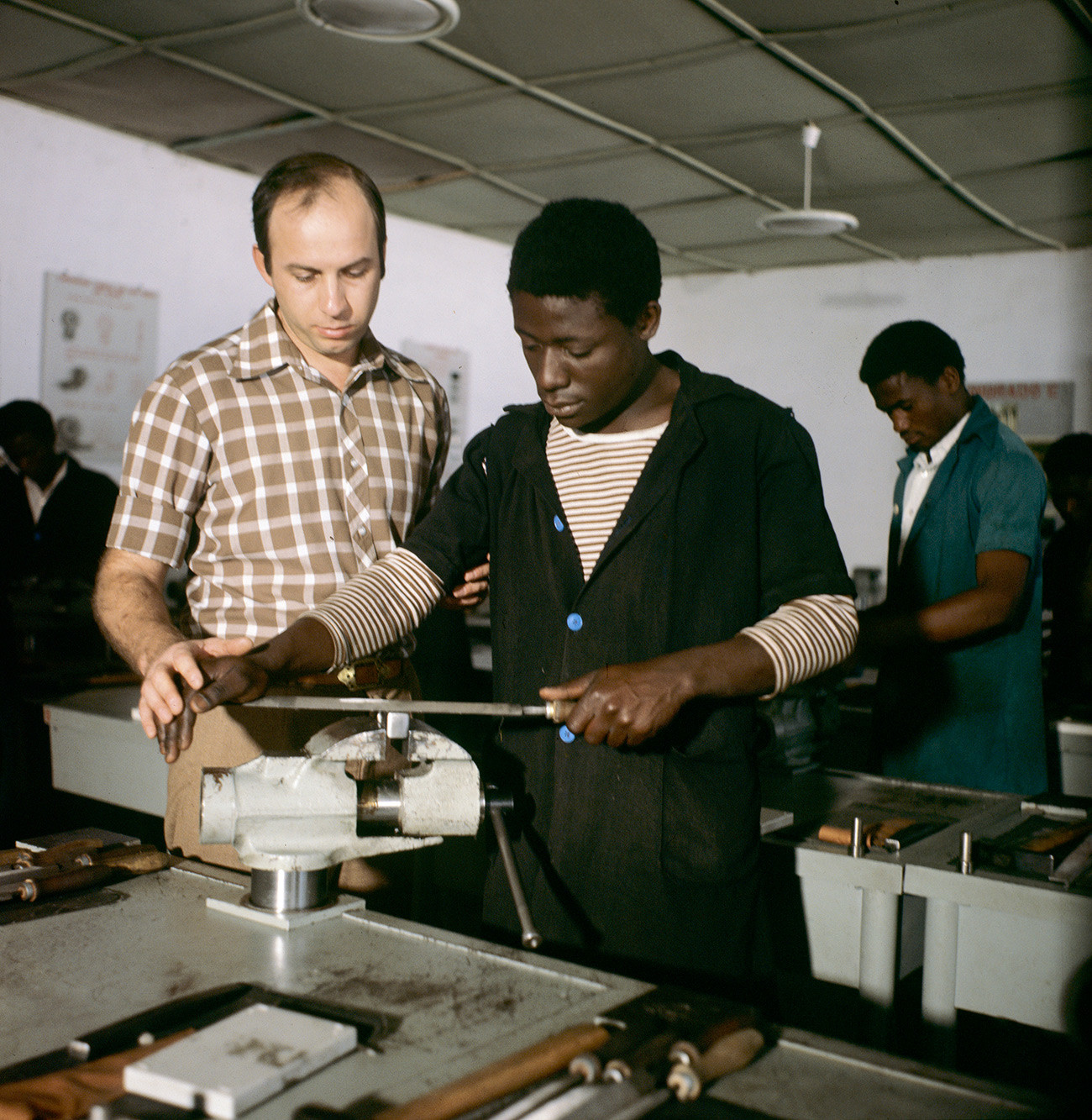 Apart from economy and politics, the Soviets made a big effort raising new, pro-Soviet African elites, inviting students from Africa to study in the USSR. From 1949 to 1991, around 60,000 Africans studied in the USSR. The biggest university to welcome them was the UDN (People’s Friendship University) in Moscow, named after Patrice Lumumba, the pro-Soviet premier of Congo who was killed in 1960.

There were several grim episodes. For instance, a scandal erupted after a Ghanaian student was found dead in Moscow – some of his compatriots believed he was killed by local hooligans and took to the streets in protest. But generally, the USSR was quite a welcoming place for Africans.  “Most Soviet people were friendly to us; they invited us to their houses... Some of us even married Soviet women,” Edward Na from Ghana recalled in an interview with the BBC. Many of those graduating from Soviet institutes shaped their countries’ elites – especially in the fields of medicine and industry. 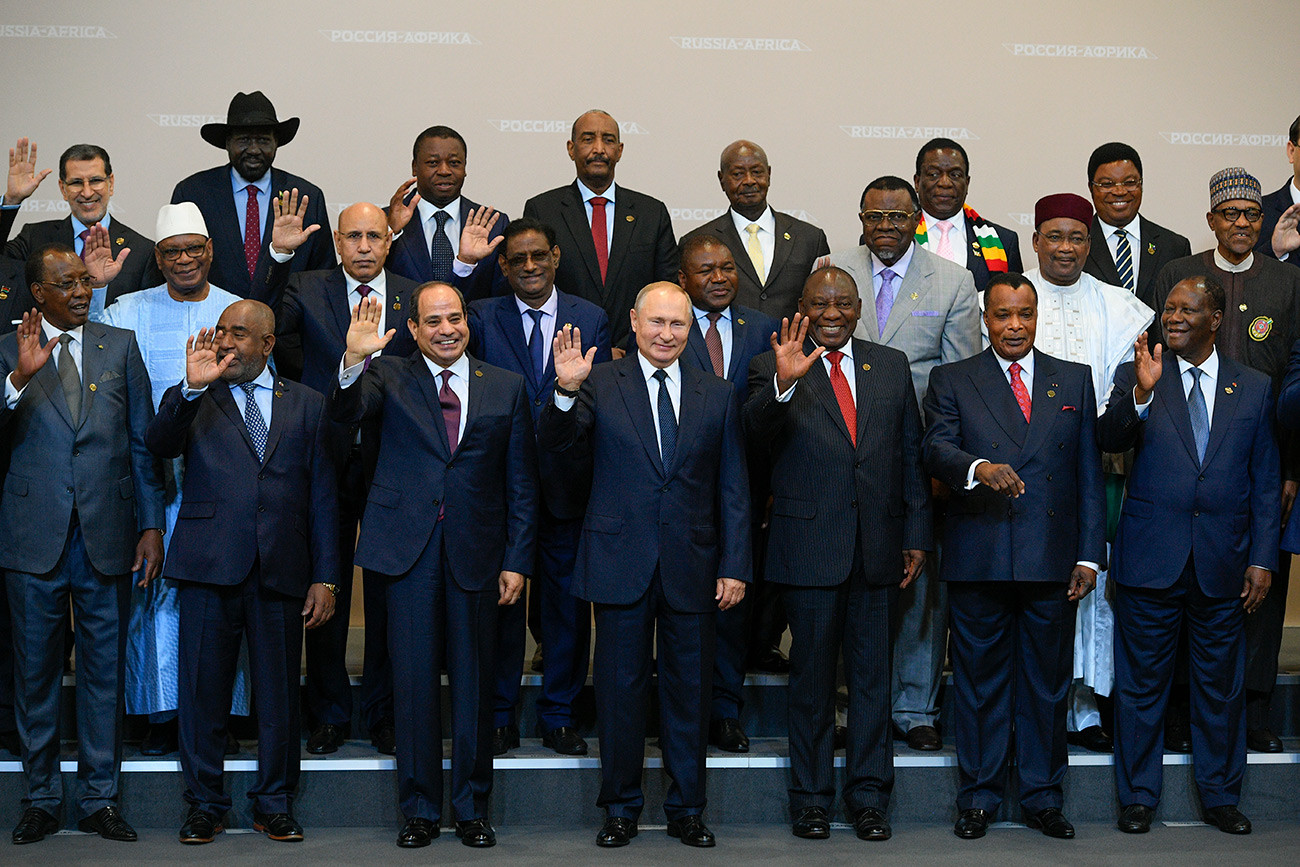 Unfortunately, the USSR's focus on Africa was too intertwined with ideology to withstand the collapse of the socialist system. In the 1990s, when the USSR ceased to exist and Russia had too many problems of its own, the level of Moscow’s leverage in the continent fell drastically.

“The post-Soviet years were marked by a weakening of Russian attention towards Africa; in its turn, Russia’s role in the continent shrank,” Africanist Alexander Zheltov wrote in 2012. Now, attempts to strengthen Russia’s role in Africa are back on the agenda (such as the recent Russia-Africa summit in Sochi) but here Moscow really has to start from scratch.