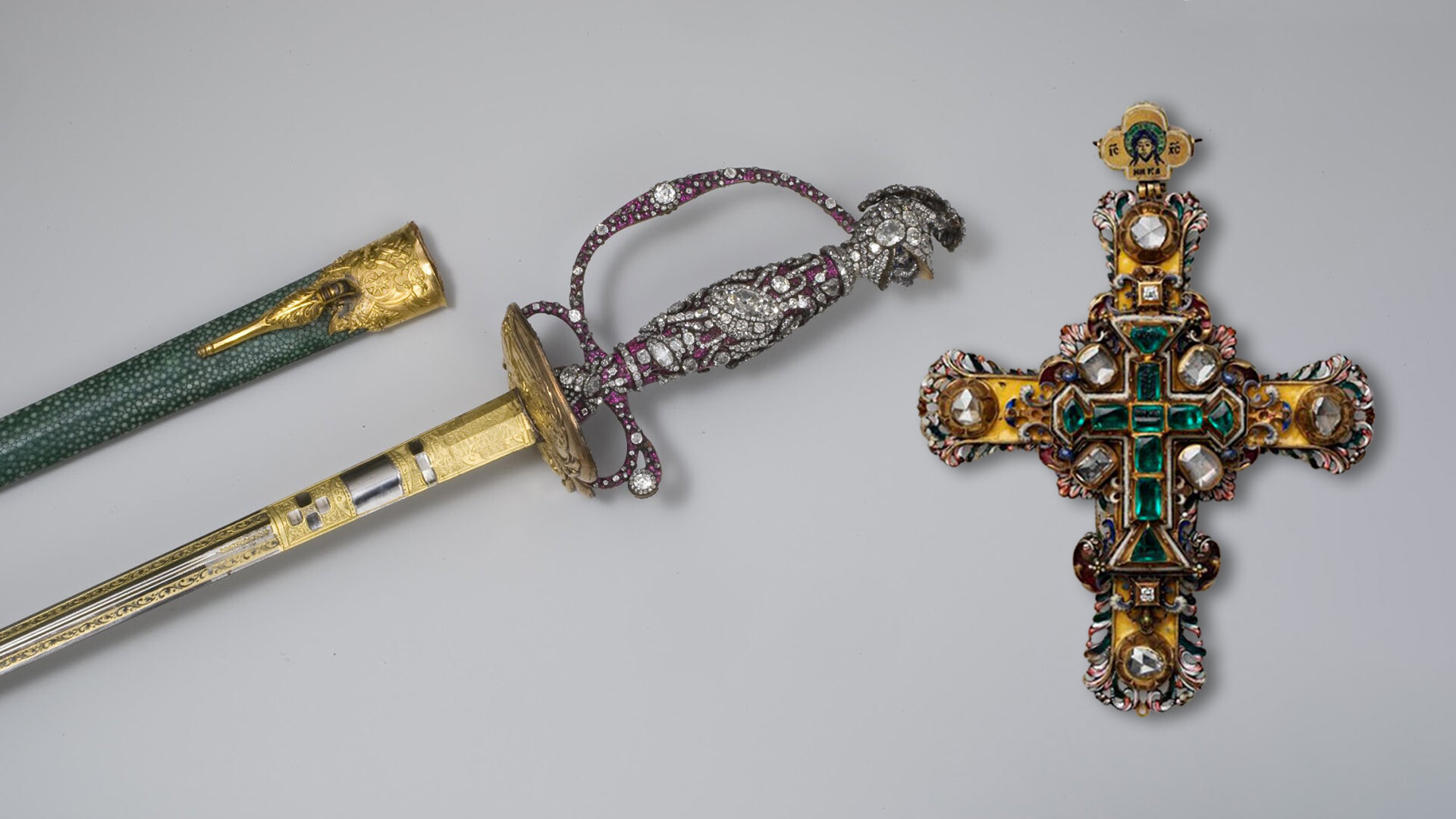 Hermitage; Moscow Kremlin Museums
Traditionally, women shone at the Russian court. Diadems, bracelets, gem necklaces for empresses and grand duchesses were made by the best jewelers of the world. But men also had their chance to impress. 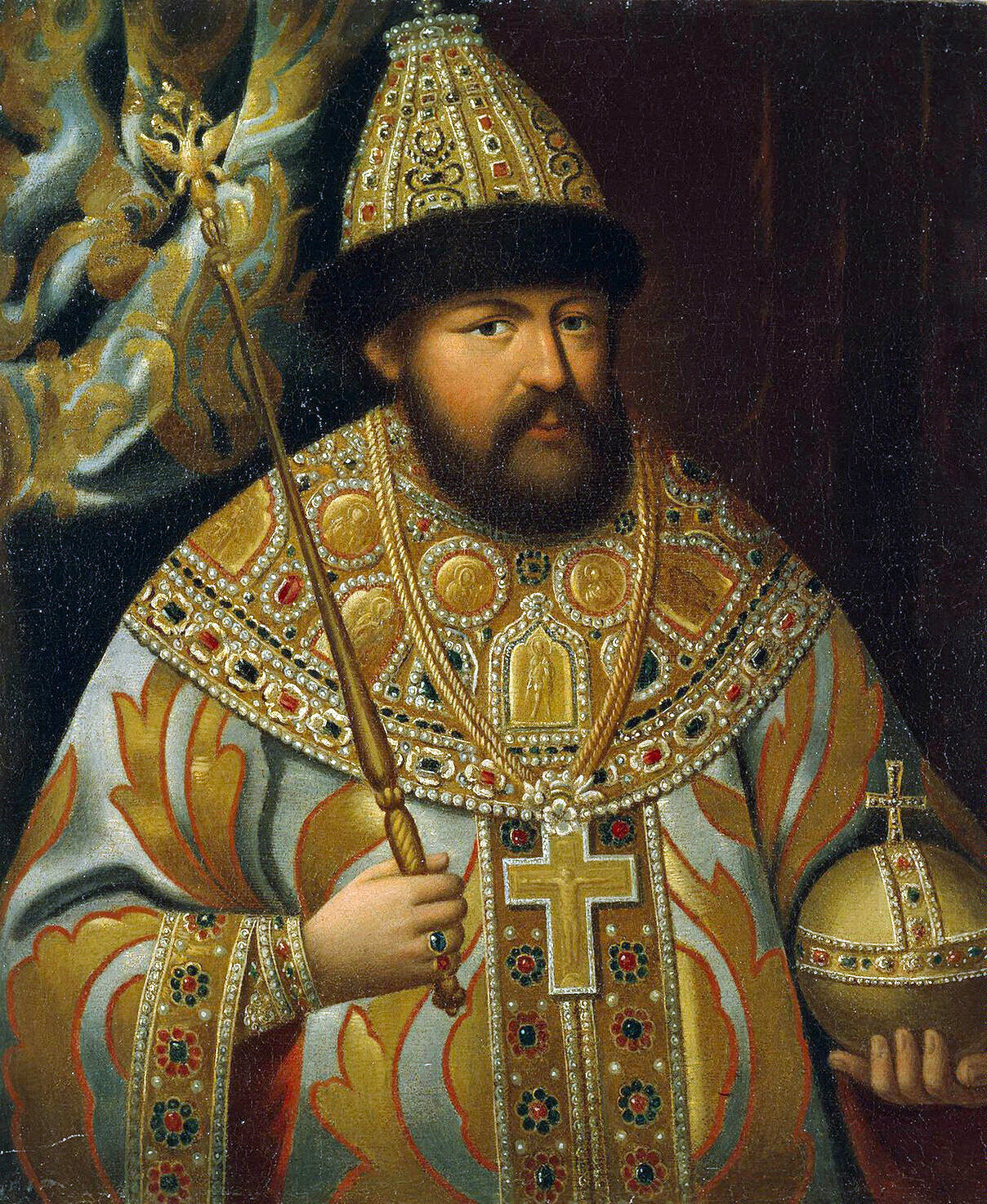 Long before Fabergé appeared at court, Greek craftsmen were making jewelry for Russian monarchs. For example, for Aleksey Mikhaylovich, they created a special type of adornment called ‘barms’, used for special occasions and coronations. Seven medallions with images of the Virgin Mary, the newborn Jesus and the saints, miracles and apostles are adorned with gems, including 248 diamonds. The ‘barms’ were attached to a wide collar that covered both chest and shoulders. 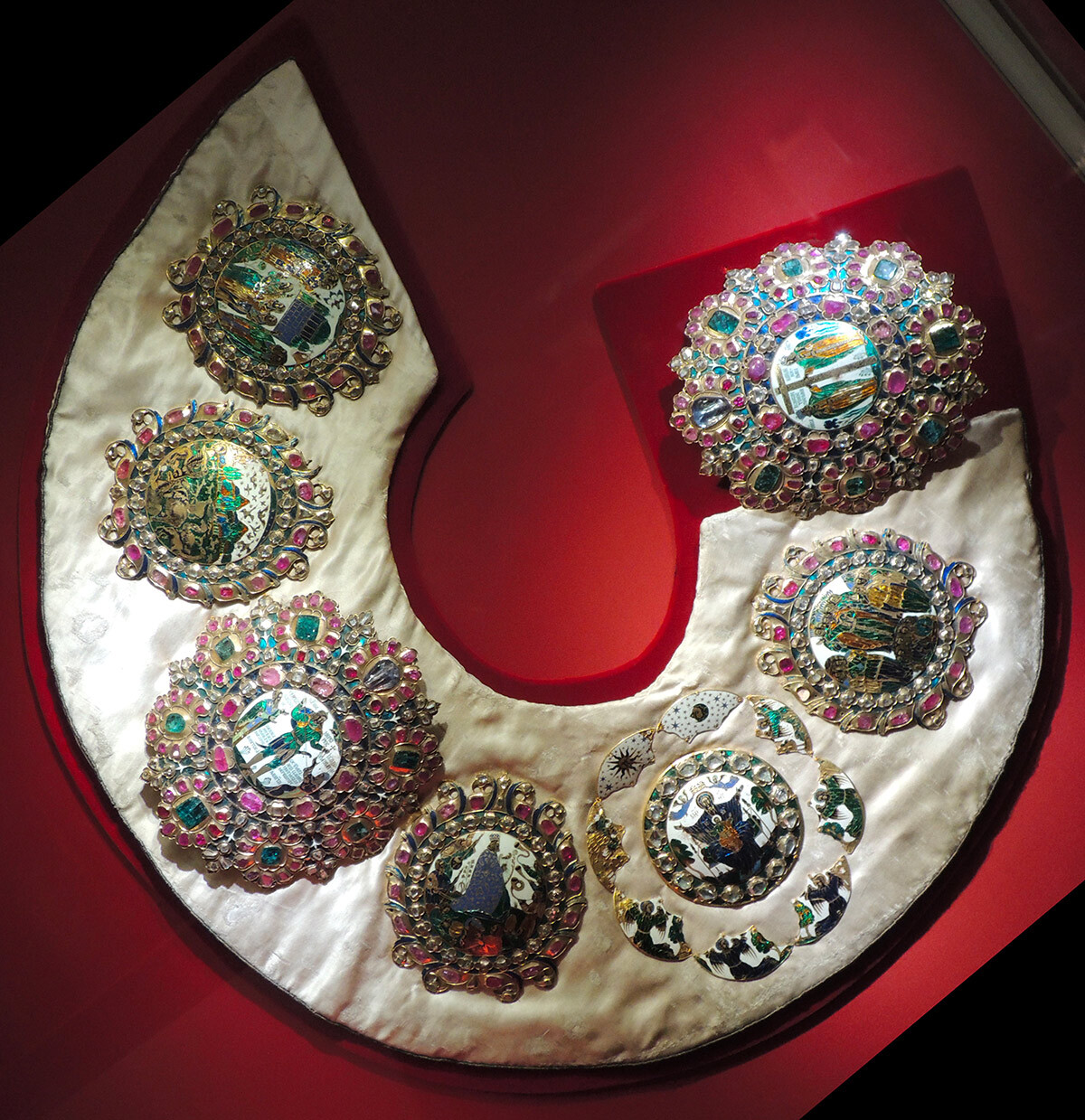 Tsars didn’t wear barms in everyday life, but, instead, adorned themselves with various rings – with carved ornaments, signets and two-headed eagles.

Peter the Great in Russian costume

The reformer tsar wouldn’t be himself if he didn’t adapt even the simplest of trinkets to something useful. He used his rings as stamps and as reminders of important milestones. On one of them, he was pictured as a carpenter with ship-making tools.

A ring with an emerald adorned the carved image of Peter with a scepter and orb, surrounded by the words: “Tsar and Grand Prince Peter Alekseyevich of All Russia.” Another ring had a signet that read: “Where there is truth and faith there will be strength.” Very similar to one of the monarch’s quotes. 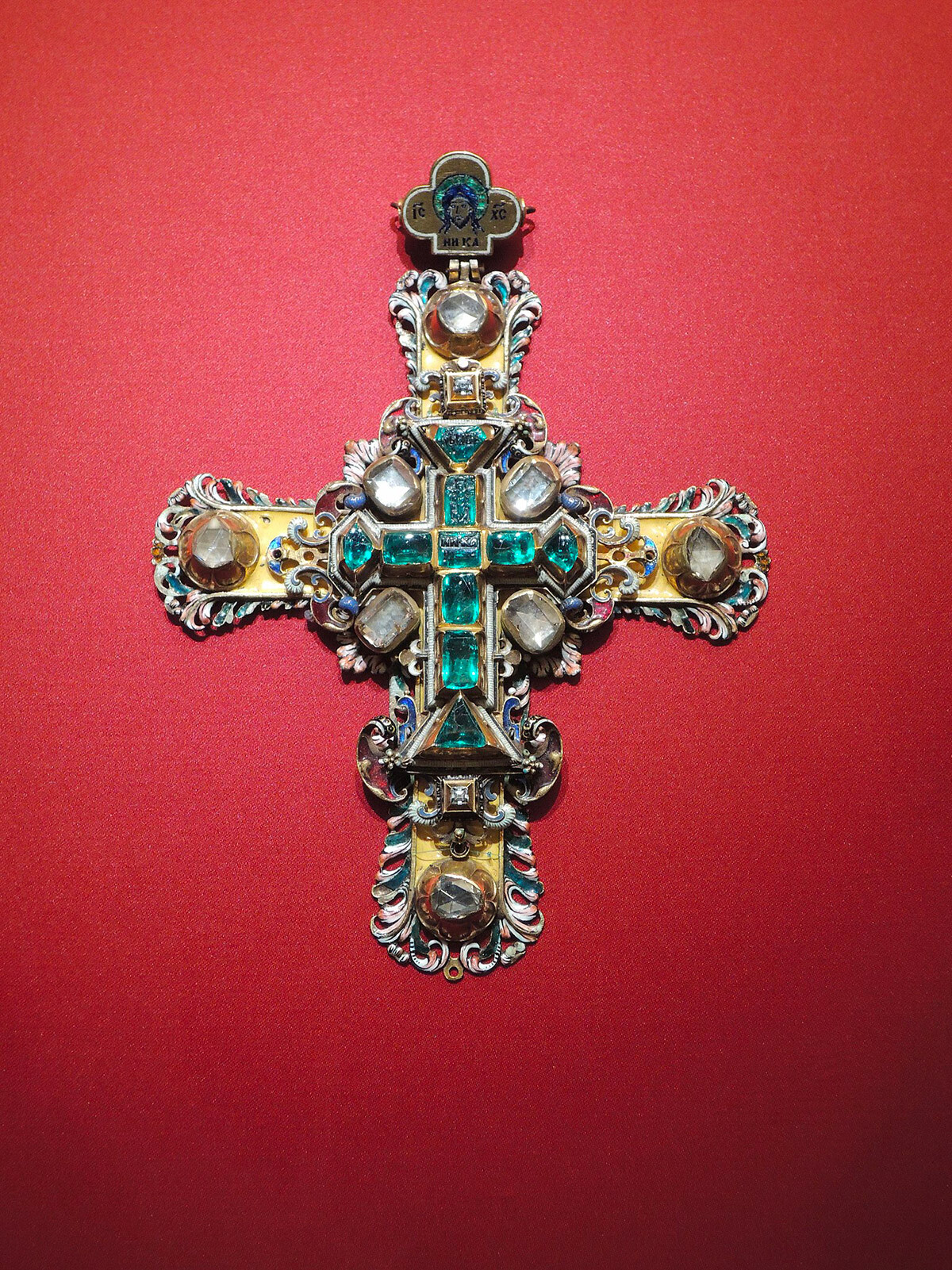 Pectoral cross of Peter the Great

He didn’t forget about his soul, either; his pectoral cross was not only a religious symbol, but a true work of art. In its center, on the front side, the jewelers placed another laid-on cross made of emeralds and on the back side – an image of the monarch’s heavenly patron, Saint Peter. 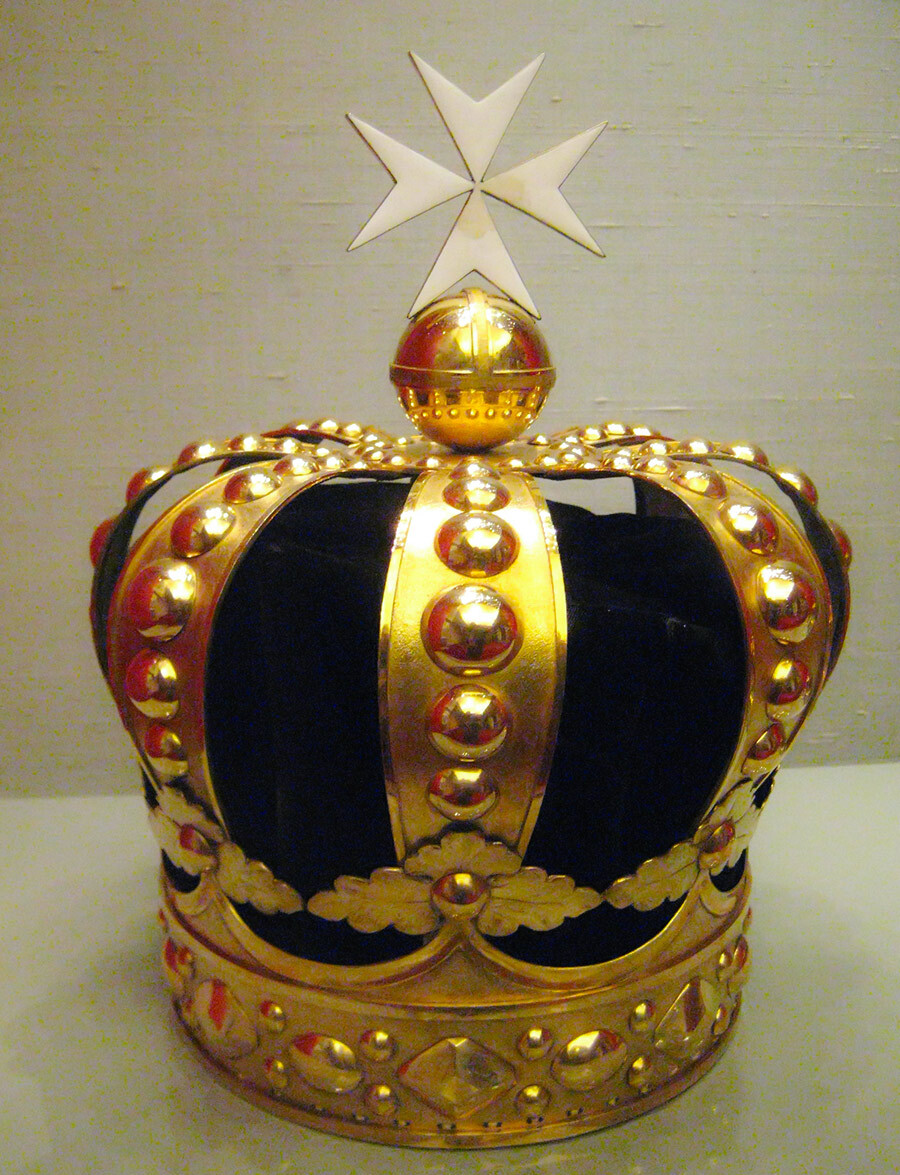 The son of Catherine the Great probably didn’t consider himself a dandy, he just had a refined taste. In 1798, he was presented a special crown as the Grand Master of the Sovereign Military Order of Malta. It had no gems in it, only eight golden arches converging at the top, holding an apple. On it, the cross of the Knights Hospitaller sat, made of white enamel. Along with the crown, Paul I received a ring with a diamond. Foil was put under the diamond, which gave it a rich red color. 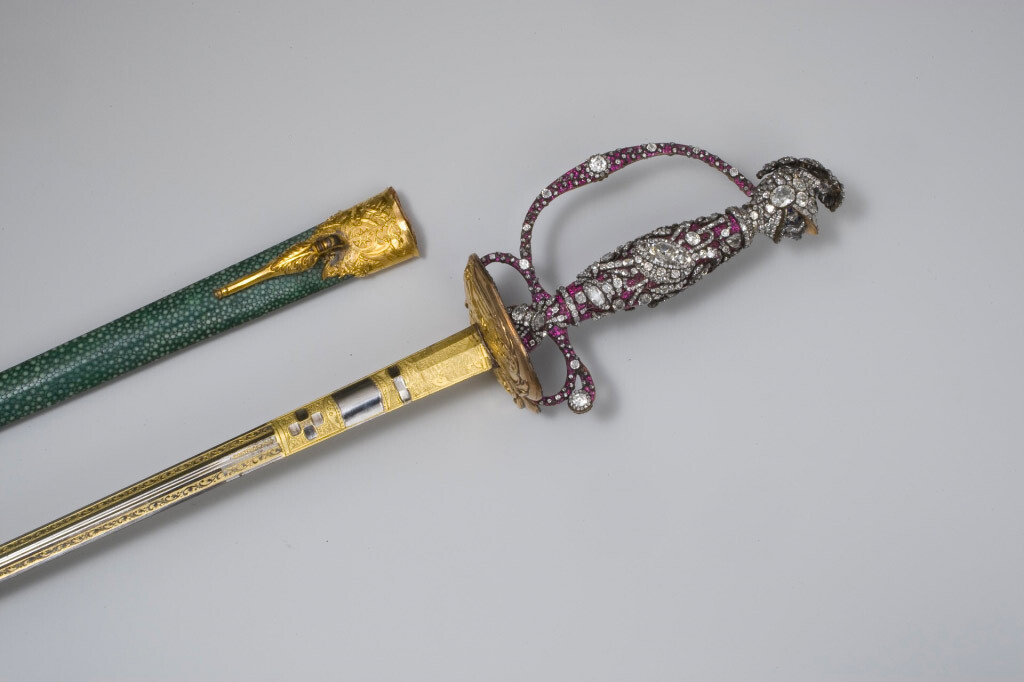 Besides the usual adornments, the emperor had “military” ones, too – St. Petersburg craftsmen made him a dress sword with a hilt studded with rubies, diamonds and sapphires. And the pommel of the sword in the shape of a helmet was a reminder that Paul I was the head of the Knights Hospitaller. 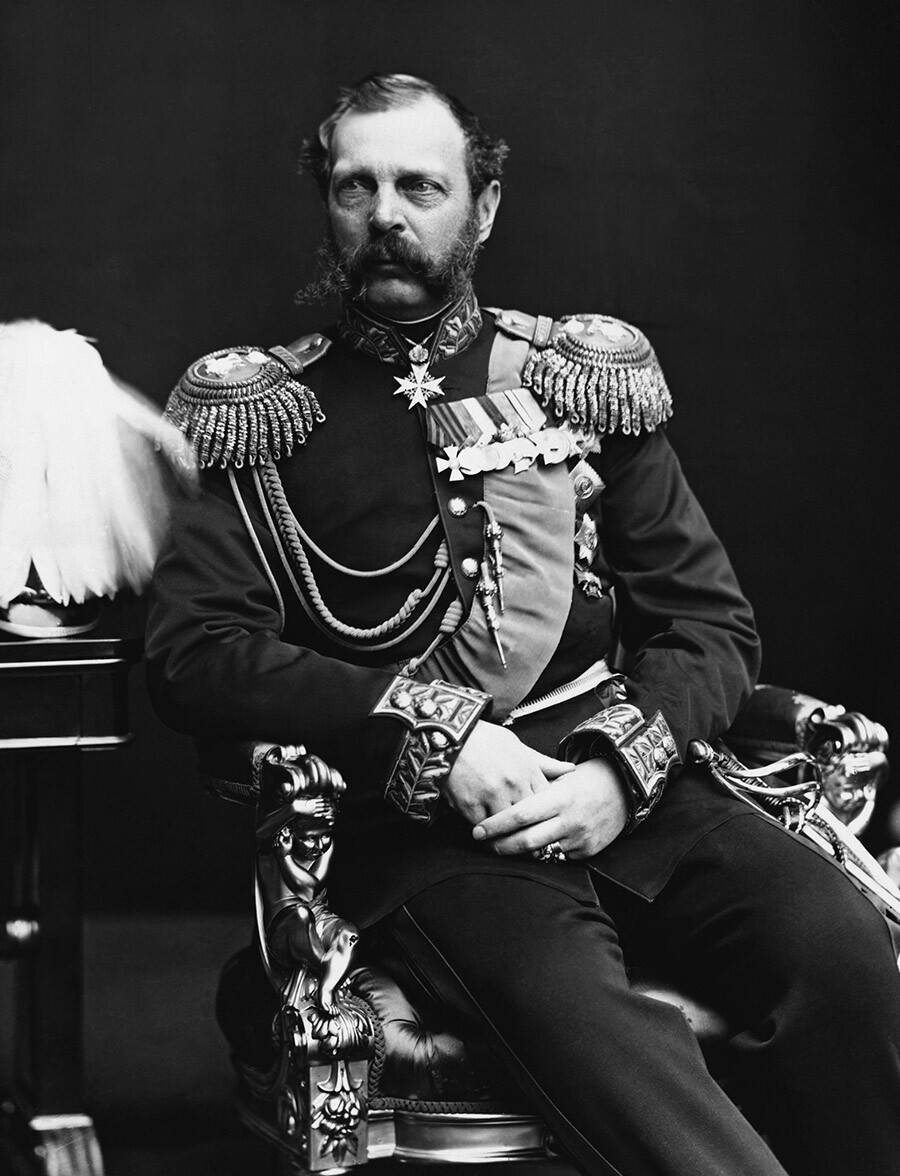 In 1834, an unusual gemstone was found in an emerald mine around Yekaterinburg. Depending on the lighting, it changed its color from rich green to deep violet and bright red. The find was named alexandrite after Tsesarevich Alexander Nikolayevich, who celebrated his coming of age that year. 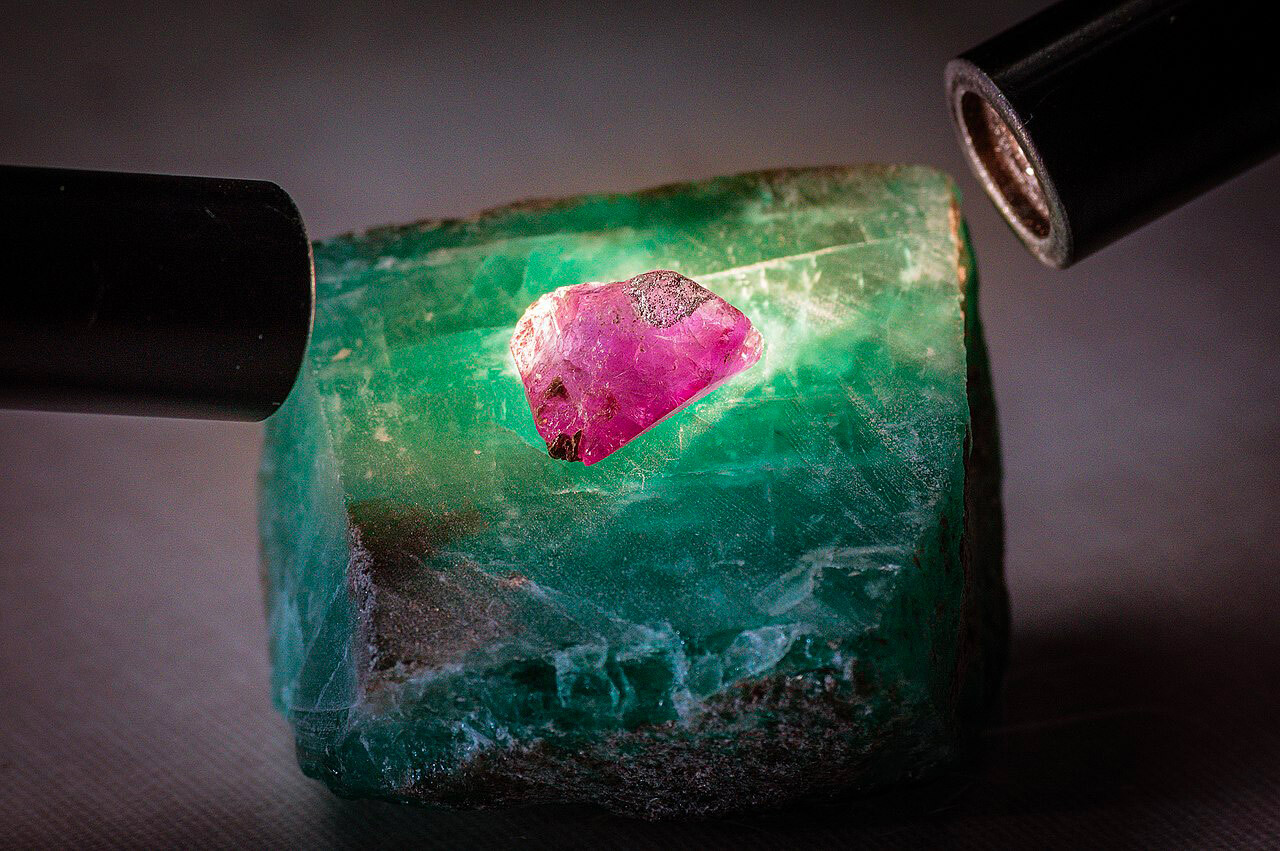 The gemstone was rare and quite expensive, only the nobles could afford such an exclusive gift. But Alexander II, of course, was its main owner – he wore a ring with this stone, never taking it off. The emperor forgot about his ring only once – on the day he was killed by the anarchists. 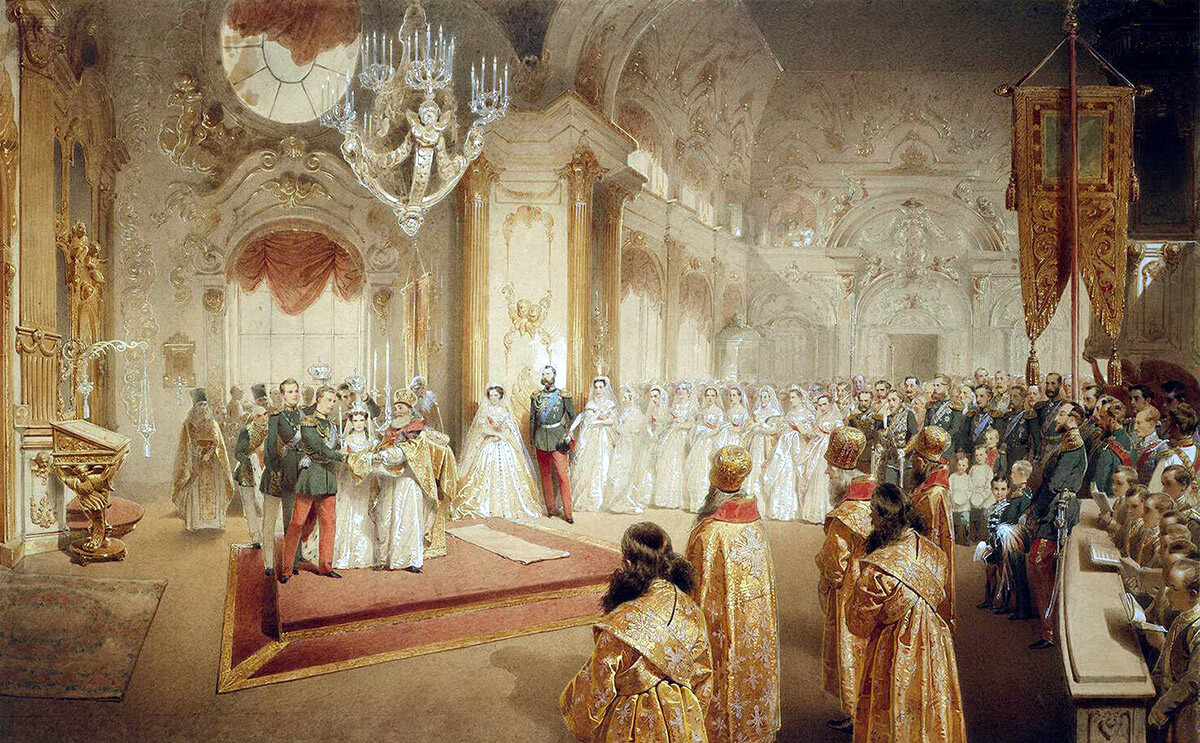 Tsesarevich Nicholas Aleksandrovich, the eldest son of Alexander II, was preparing for his wedding with Princess Dagmar of Denmark. Wedding rings with large diamonds were already ordered. But the wedding didn’t happen: the heir to the throne died from tuberculous meningitis. However, the alliance with the Danish ruling house was established anyway and Princess Dagmar married Tsesarevich Alexander Aleksandrovich, instead. It was decided to use the same rings from the original wedding. And a new tradition was established –these rings were also used for future weddings of the imperial heirs. So it was: the marriage of Nicholas II and Alexandra Feodorovna was sealed with the same rings. The last Russian emperor didn’t part with this ring until his very death. 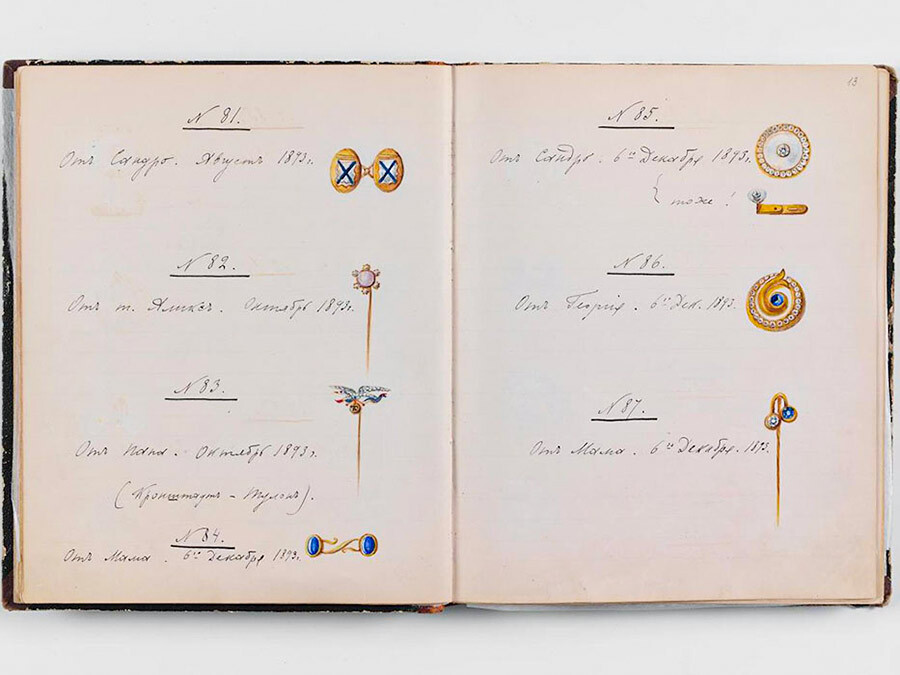 A special album of Nicholas II sketching his jewels

Cufflinks were the most common gift for men, and fit for every occasion. Among others, this accessory was provided by Carl Fabergé’s firm, which created little masterpieces linked to important dates in the life of the Romanov family or holidays. For example, for Alexander III the craftsmen created a pair of cufflinks with his initials laid out in diamonds against blue enamel, as well as an unusually modest pair – from rhodonite with an embossed monogram. 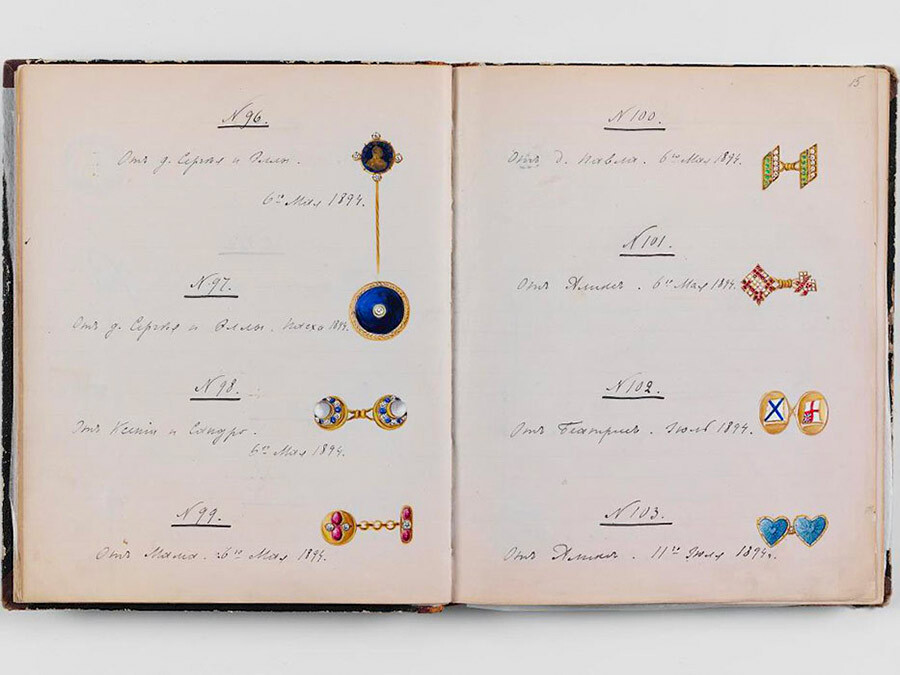 A special album of Nicholas II sketching his jewels

Nicholas II also received cufflinks – personalized, thematic, adorned with gems and carvings. Like his predecessors, the emperor kept a special album, in which, in the span of the quarter of a century, all gifts were sketched. For his 20th birthday, he received traditional cufflinks with an “XX” monogram and, from his bride, the future empress Alexandra Feodorovna – cufflinks in the shape of keys with diamonds and rubies.