10 things that only Russians understand

Lifestyle
Alexandra Guzeva
Even if you’ve lived in Russia for many years, and even if you already like dill and can drink vodka without getting drunk, there are some aspects of Russians’ every day behavioral code that are hard to understand. But we’ll try to explain. 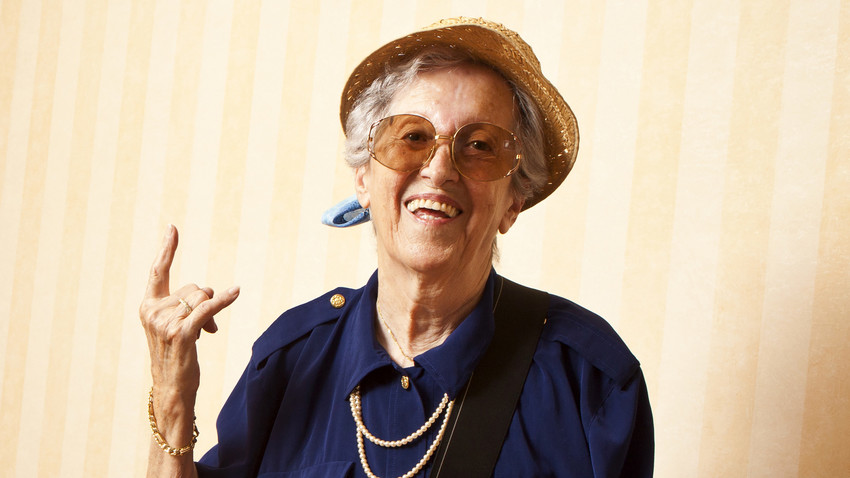 The Russian babushka is more than just a grandma; it’s a way of life and mindset. You can’t call yourself babushka if you’re not asking your grandchildren whether they ate three or four times a day, and babushkas are always grumbling that grandchildren are not dressed warm enough, even if they’re older than 30.

One of the most important features of a babushka is cooking as if famine is near. In summer they’re pickling vegetables and boiling liters of jam; everything they cook they usually grow themselves. In winter, they’re making liters of borsch, kilograms of pancakes and trying to make you drink as much tea as possible. Also, a babushka will try to convince you take food to go (in case you get hungry on your way).

Now, about `to go’ – after visiting your babushka you will certainly find yourself hauling bags of food home, and there are several things that you should do before leaving.

First, taking a seat before a long journey is almost a sacred ritual. Often you can sit right on your suitcase. Of course, that’s a superstition, but Russians take it very seriously.

Second, if you had a party or just a couple of glasses at your friend’s place and now you want to leave, then a friend will suggest you drink “на посошок.” Be ready for this: It means to drink to the very last no matter what, to drink before the road.

If you see a man squatting and nibbling sunflower seeds – you are in Russia. Or if women are sitting on the bench, sharing gossip and chewing seeds… you’re in Russia. They should spit the shells on the ground forming a small mound. Another option is to spit on yesterday’s newspaper, which is laid in front of you if you’re at home.

Sunflower seeds are like popcorn – you can’t stop until you eat the whole bag. Nibbling on these seeds is an art form, especially when trying to separate them from the shells with only your teeth and tongue (no hands!).

4. Pop-up business on the 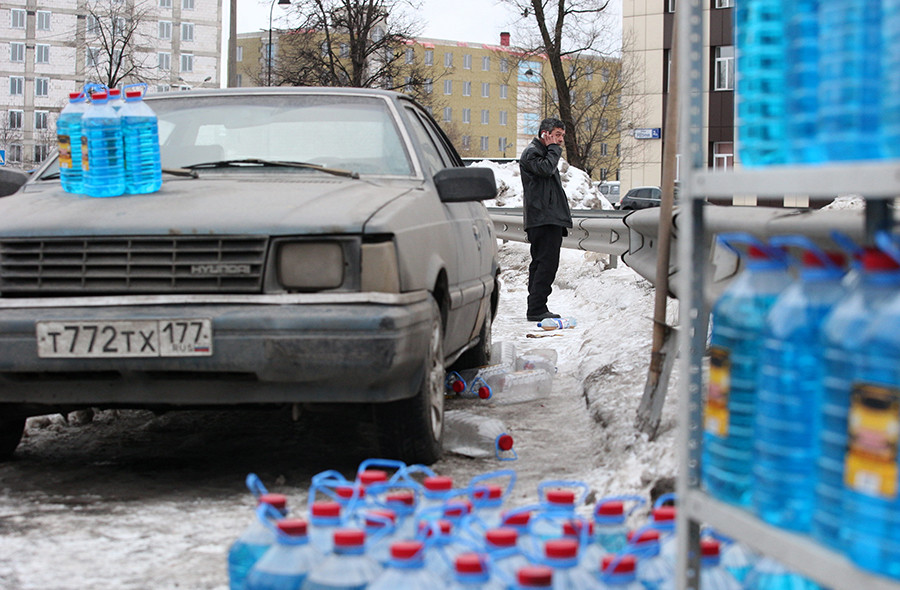 you have a chance to drive on Moscow’s highways in winter, you might see an odd pyramid of five-liter plastic bottles with a blue liquid inside. Also, this pyramid is the hood of a car. They’re selling freeze-resistant windshield washer fluid. Due to the ferocious your windshield washer fluid might freeze, and winter roads are so dirty that you might run out very suddenly when you’re driving and literally can see nothing due to the dirt and ice. Then suddenly you see those emergency supermen, the antifreeze rescue team. You can question the legal side of their business, but don’t question the quality of the liquid – it should be much better than the one you buy at a fancy shop. Mostly because they use forbidden chemicals to produce it (don’t breath a minute after sprinkling it all over your windscreen).

Apocalyptic traffic jams, especially on Moscow roads, have given birth to thousands of ‘road businessmen’ in Russia. They walk between lanes selling flowers, coffee or car phone chargers. Before Victory Day they usually sell stickers for or small Russian flags. 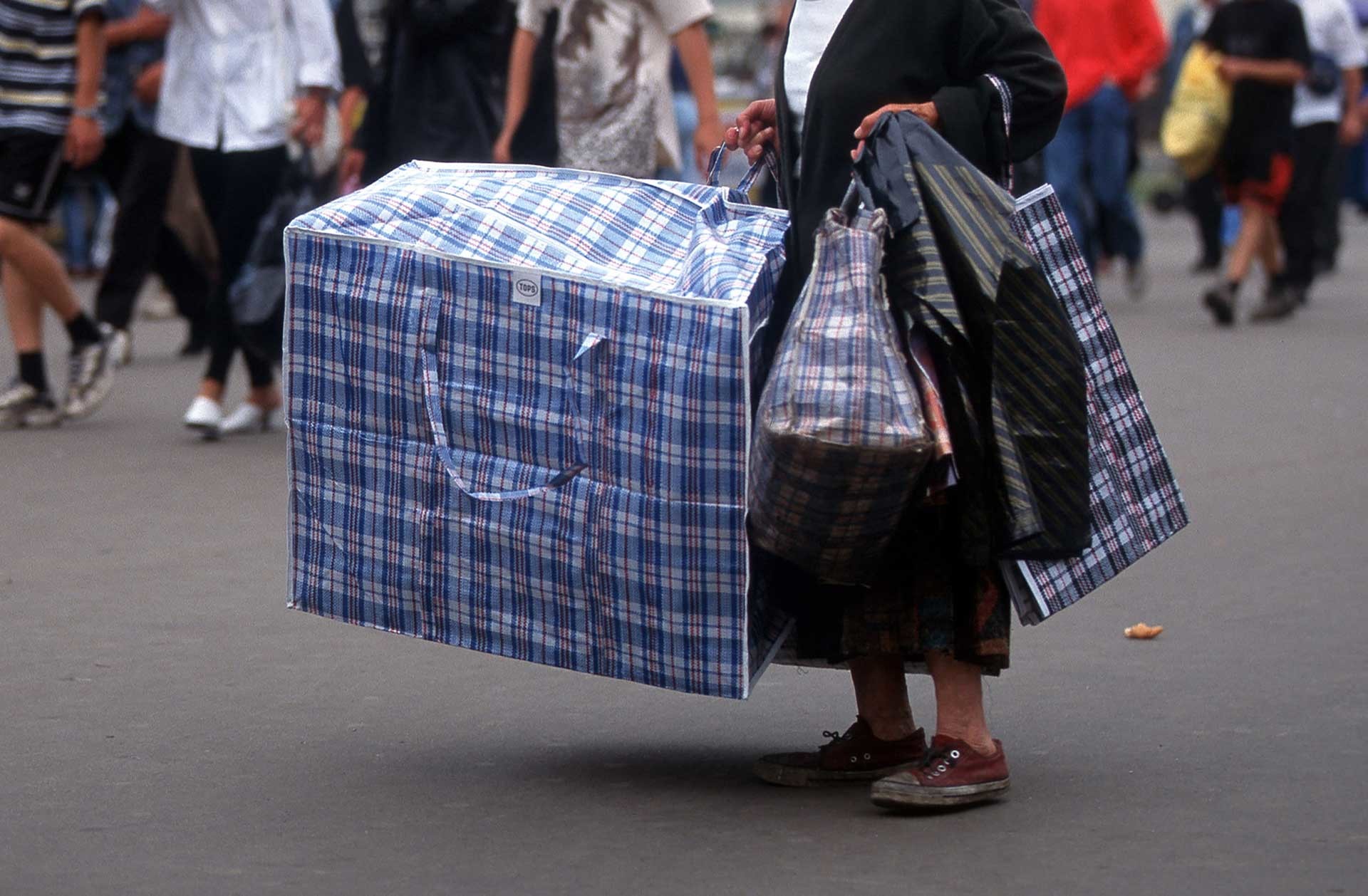 stores in Russia usually plastic bags to take your goods home. But Russians never throw the plastic bags out! Those bags can be used as garbage bags, or for any other needs. In the end, every Russian family has a big plastic bag where they store all the other plastic bags.

“What if I need it someday,” Russians usually say about anything in which you can put something. Russians also can’t throw away those beautiful boxes for candies, and they use them to hold small things they’re afraid to lose such as threads or buttons! The most beautiful candy boxes might even be used for jewelry.

6. Smiling in public transportation is a no- 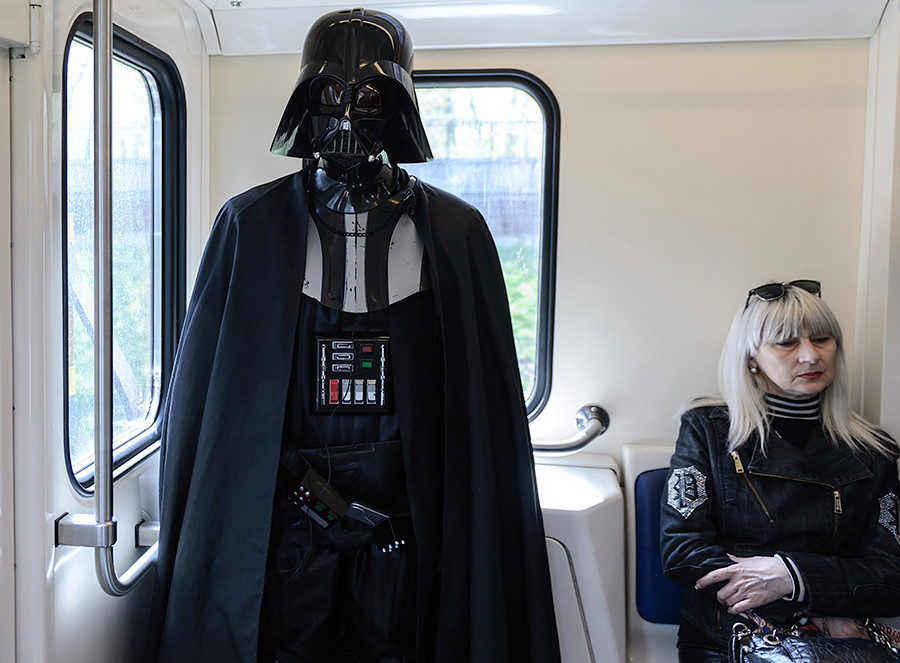 you might know, Russians don’t smile much, but there are exceptions. They can smile if you look weird; if you have a bad hair day; or if you’re dirty; or if you went outside and forgot to put your pants on. So, if you see someone on the bus or metro looking at you and smiling, fire up a selfie camera quickly to check what’s wrong with your looks.

7. Always check your coat when going 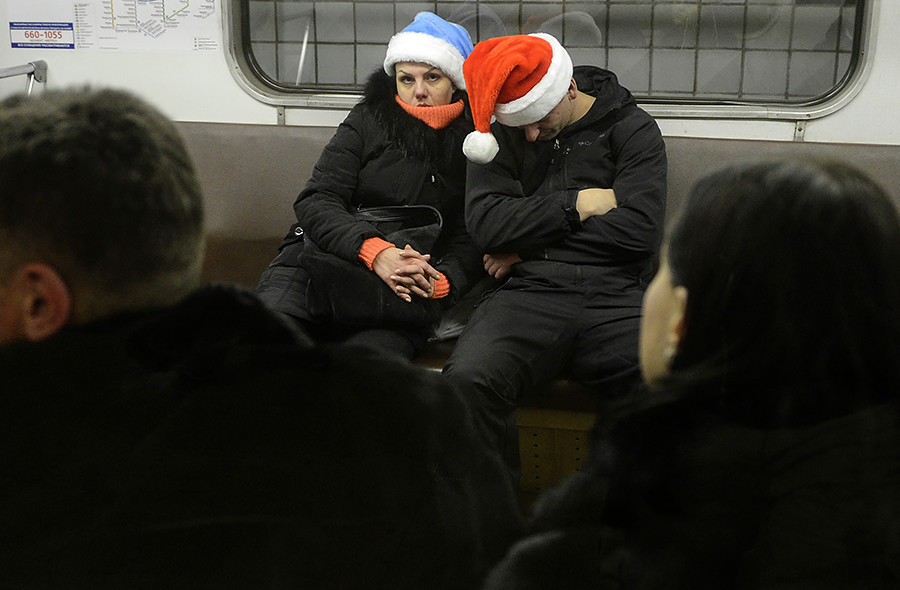 October to May most public buildings in Russia offer to check your coat free of charge. In fact, this is often obligatory, and you can even be prevented from entering a theater, restaurant, museum, hospital or state office if you remain dressed in a coat.

While this service is always free, don’t lose your badge! In that case, you’ll be fined, and what’s even more disturbing is the angry stare of the coat-check ladies.

This rule to check your coat is not a fad. During the cold Russians sometimes wear enormous furs and coats. Also, the coats easily get wet or dirty. Clearly, you wouldn’t be happy sitting in the Bolshoi next to a yeti covered with snow melting on you.

Also, Russian schools require students to change shoes, and at the people usually change into other footwear because you can’t go the whole day in furry winter boots that are knee-high. 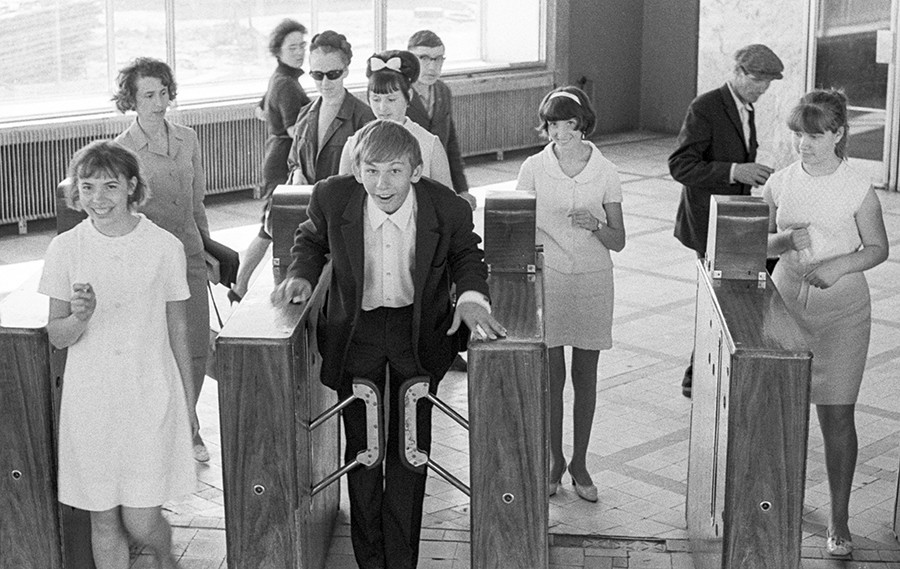 How do you picture a turnstile? It’s a device that doesn’t allow you to enter a and opens only if you have a proper pass or ticket. But Russian turnstiles are different – they seem to be an open as if they’re saying: “come, enter”! And just when you think you can squeeze through, mechanical arms swing out to crush your hips. Even if you have a ticket but it doesn’t work properly, or if you’re a bit late passing through, – bump!

They have just recently started to exchange those old fashioned turnstiles with the modern friendly ones, with opening doors. But in smaller cities (and in older Russians who still remember those things) the fear of being suddenly struck with a turnstile lives on.

9. Sitting at the table

There is a passage in Alexander Pushkin’s book, The Captain's Daughter: “May God grant that we never again see so senseless and merciless a revolt.” That could be attributed to a Russian feast or zastolye (from the word stol – table). There are loads of dishes, including 15 appetizers, three or four mayonnaise salads and three types of main dishes, and much alcohol for sure. People sit at the table for many hours; if it’s a major event, then from morning until midnight.

The symbol of this feast is a wolf from an old Soviet animation Once Upon a Dog. By accident he came to a wedding (which normally doubles the amount of dishes), and sat under the table eating everything people gave to him. Finally, he had a huge belly and was so drunk that he decided to sing! Russians’ favorite thing to do – a cappella drunk singing, the most soulful and profound music that you will ever hear. 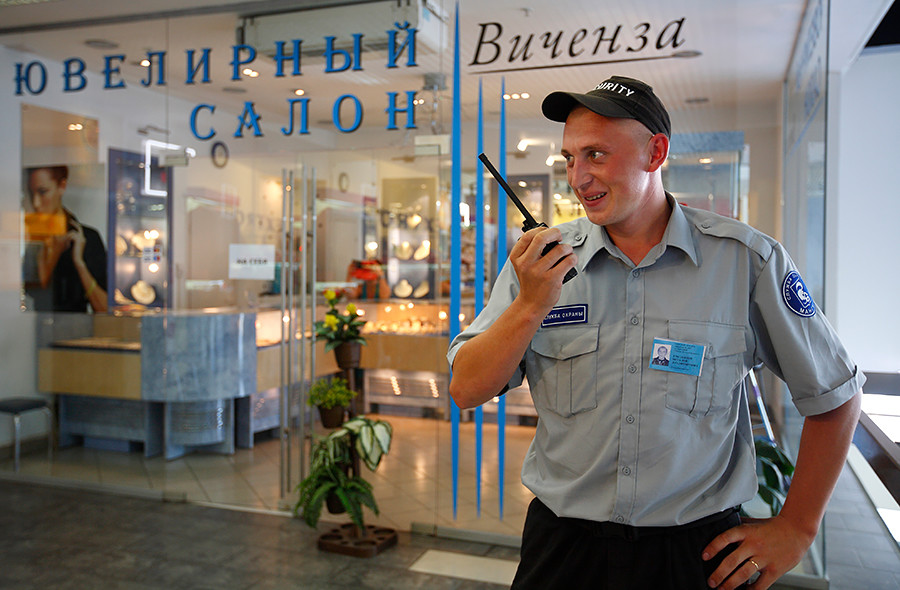 The first person you meet coming to a new place in Russia is a guard.They are pretty much everywhere, sitting at their checkpoints. So if you are going to a restaurant or a shop in a closed territory (or God forbid come by car), they will play at least some airport security or Kremlin secret agents at worst. They can ask many questions and stare at you suspiciously. But because every guard’s dream is to catch a criminal, for sure you will have to have your passport with you at any time.