7 Hollywood stars who surprised us all by speaking Russian 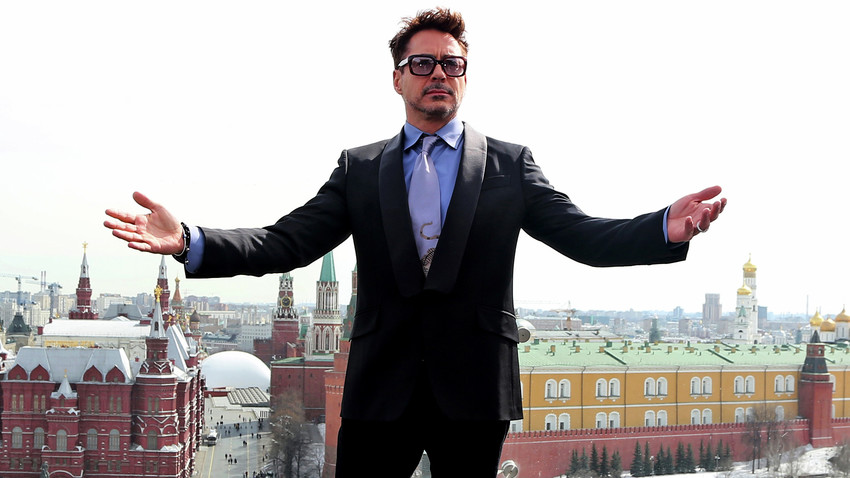 Ekaterina Chesnokova/RIA Novosti
Kate Beckinsale and Ralph Fiennes set a good example for any diligent student of the Russian language. If these celebrities can do it, so can you!

It’s no secret that many actors in Hollywood have Russian roots. Helen Mirren’s grandfather was in the Imperial Russian Army before being exiled after the 1917 Revolution. Leonardo Di Caprio’s grandmother was born in the early Soviet Union. Even Whoopi Goldberg’s great-grandmother lived in Tsarist Russia. We found recordings of seven Hollywood celebrities who can speak Russian very well. And not all of them even have Russian roots!

Before taking on her role in Underworld, actress Kate Beckinsale studied French and Russian literature at Oxford University's New College. She speaks not only French and but also German.

“I wanted to read Chekhov and Molière in their original languages,” the actress told Larry King during an interview on his television show.

She said that Russian is a very difficult language that only becomes more difficult at an advanced level, which “is really unfair, because when you go further with French, it gets easier, but Russian is hard, the grammar is very hard.”

Kate even taught American TV host Stephen Colbert a few phrases in Russian, including “No, I will not give you my Wi-Fi password,” “Mr. Putin, please put on your shirt”, and “Goodbye!”.

During a press conference in Moscow she even answered questions in Russian!

“I’ve always loved Russia, I love the literature. The first play I ever did was Chaika,” she said. “I love Anna Akhmatova, Alexander Block. We spent the whole year on Fyodor Dostoyevsky. I am very fond of Anton Chekhov, he is probably my favorite...”

Mila was born in the Soviet Union in an area that is now part of Ukraine. At the age of seven, her family moved to the United States but continued to speak Russian at home, which is why she knows speaks it so well. In an interview with the Russian media, she explained that she stopped learning Russian after first grade. As such, she does not know how to write in Russian, reads it only a little but can speak very well.

In 2011, when she arrived Moscow alongside Justin Timberlake to promote their movie Friends with Benefits, she even an argument with a journalist about Justin’s role. Justin was, to say the least, surprised!

“What? I just wanted you to discuss it,” Mila said in Russian. “I don’t like this!” Justin quipped, probably because he didn’t expect that Mila can speak Russian.

Mila Kunis and Justin Timberlake at the press conference in Moscow

When a journalist asked why the musician needed this role, Mila simply responded by asking back, “Why does he need to act in the movie? What do you want him to do?”

Mila and Justin at the press conference in Moscow

During interviews with the Russian media, she speaks mostly Russian.

The British actor is most famous for films like Schindler's List, but he also learned Russian for Vera Glagolyeva’s last movie, Two Women, which is based on Ivan Turgenev’s famous play A Month In the Country. And yes, Fiennes plays a Russian character in the movie.

In an interview with RT UK in 2016, he said that learning Russian was “extremely hard,” but he wanted to gain experience with a language other than his mother tongue.

He also said he’d been interested in Russian culture for many years and felt comfortable in Russia.

When speaking at the Moscow Film School, he tried to speak Russian but conceded that he still feels more comfortable answering questions in English.

Fiennes visits Russia frequently. While promoting the movie Spectre in Moscow, he delivered a speech fully in Russian. Most impressive: He made almost no mistakes!

“Good evening, ladies and gentlemen,” he began. “I am very glad to be here with my colleagues. David Bautista, I am a bit afraid of you, David! And the beautiful Naomie Harris!”

“The English writer Ian Fleming wrote a book, From Russia with Love. In this book, they sent a beautiful woman to seduce James Bond. We came here not to seduce you, but only to entertain. And of course, we came to Russia with love.”

Hollywood actress Milla Jovovich was born in Kiev, then part of the Soviet Union, to a Russian mother and a Serbian father. Her family left the Soviet Union when she was five and ended up in the United States. But Milla still occasionally wows Russian audiences by speaking Russian on her visits to the country.

“Of course, I want to go to a Russian shop, buy an Olivier salad, buy a Napoleon cake,” Milla said once told the Russian media. “Yes, the Napoleon is the best!” her husband agreed. “Pelmeni, vareniki, borscht, sour cream.”

One time she even starred in a Russian-speaking role for the film Lucky Trouble.

Just listen to her speaking Russian during an episode of the Europa Plus Russian radio show! This must have been the easiest job ever for the translator.

“I understand [Russian] humor, I think it’s the best in the world,” Milla said. “And of course, I like [Russian] food—pelmeni, jams.”

The American actor and producer Eli Roth has Russian ancestors and studied the language for several years in school. In 2010, he even promoted a film of his in Russian.

The Iron Man has no Russian roots, but while promoting The Avengers in Moscow in 2012, he spoke more or less passable Russian. Moreover, he even translated what he was saying into because at the audience did not seem to understand what he was trying to say.

“Good evening, ladies and gentlemen, Russian celebrities and children. On behalf of all of us, we love Russia. Thank you very much!”

According to organizers, he learned his speech for 2 hours: he started at 1 pm and at 3 pm he spoke fluently.

While the American actor and leader of the band Thirty Seconds to Mars doesn’t have a Russian grandmother, he did learn Russian for his role in The Lord of War, which he starred in alongside Nicolas Cage. It’s funny to hear how he swears in Russian, sometimes even when speaking with the American media. “Nu cho stoish kak dub?” (“Why are you standing like an oak?” in English) Jared once replied when a journalist asked him to say something in Russian.

As with many other Americans, he considers Russian to be a “very, very difficult” language.

“Russian is a language to be respected,” he once said. “It’s not to be played with. It’s very hard…”