‘Don’t say too much’: A look at Russia’s secretive air defense factory 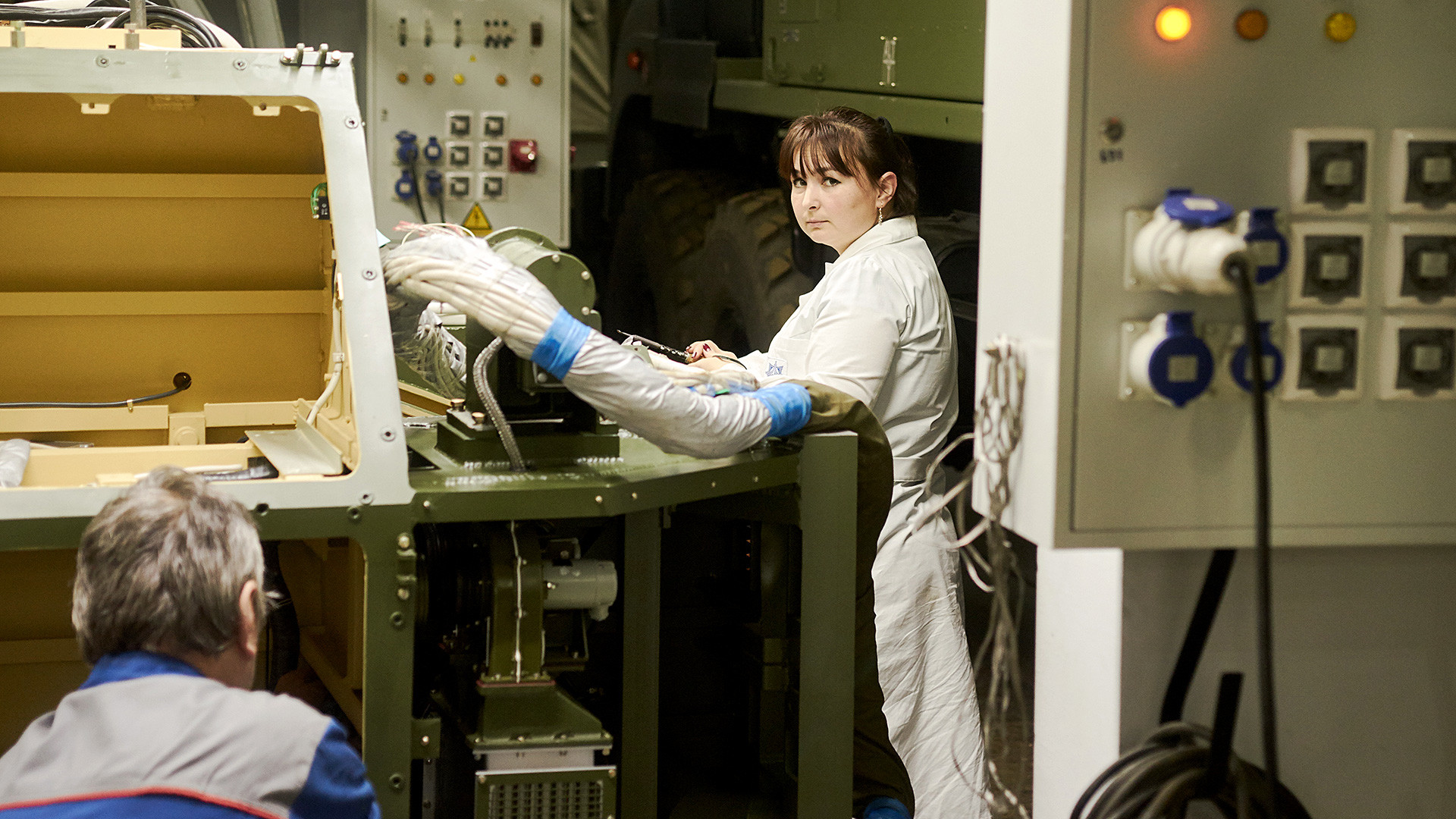 Dmitry Ermakov
Russia’s Tor air defense system is currently protecting the interests of 25 countries. The weapon is made in the city of Izhevsk by a loyal workforce - Russia Beyond visited the place.

It’s Wednesday, midday: The car park is full and the snow has turned into a dirty black sludge. Ten meters away is the entrance area but no one goes there. The walls inside are lilac and turquoise, the ceiling is low and it is so quiet that I can hear the old fluorescent lamps humming on the ceiling. Occasionally people in overalls appear at two ATMs. Between me and them a checkpoint booth and a narrow passage with a turnstile.

Recently the Kupol Electromechanical Plant in Izhevsk (1,200 km east of Moscow) has started offering PR tours - journalists are taken around the "clandestine" workshops, their "veil of secrecy" slightly lifted. For the time being, though, industrial tourism is going through the stage of overcoming the Soviet tradition of hiding everything that can be hidden. Even if there’s no need for it. 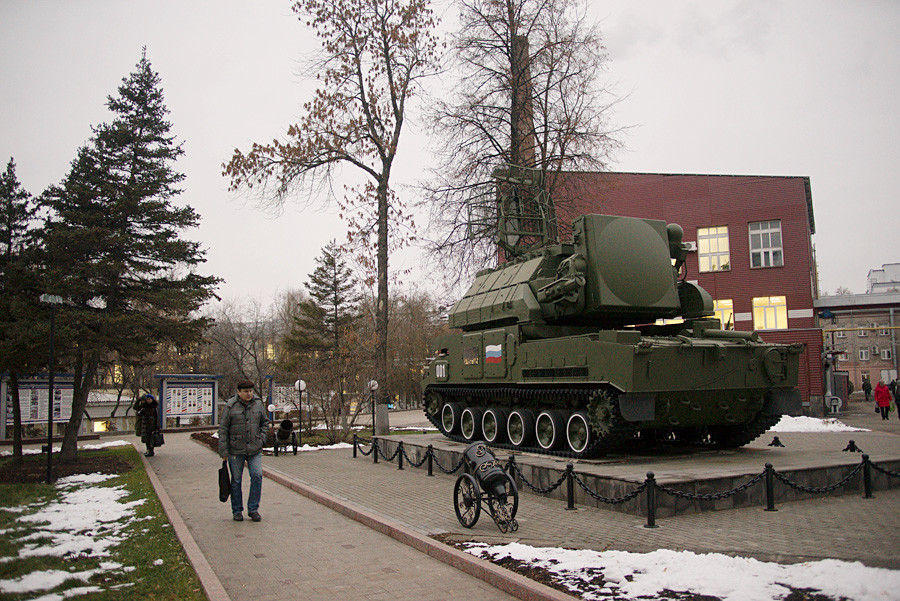 Sergei - a thin man with dark hair, wearing jeans, a jacket smart shoes - says that so far not a single foreign journalist has been to the plant, which he calls a "restricted access facility." He is from the security service and, as soon as the entrance area fills up with Russian journalists, he immediately pulls rank: "And what is the Russian Biathlon Union doing here? And Sovetsky Sport (Sports Daily)... What does sport have to do with it, comrades? You can't come in," Sergei says, shrugging his shoulders.

Two young girls remain on the other side of the checkpoint. The others, quickly forgetting about the girls, pass through a courtyard and through a heavy iron door. 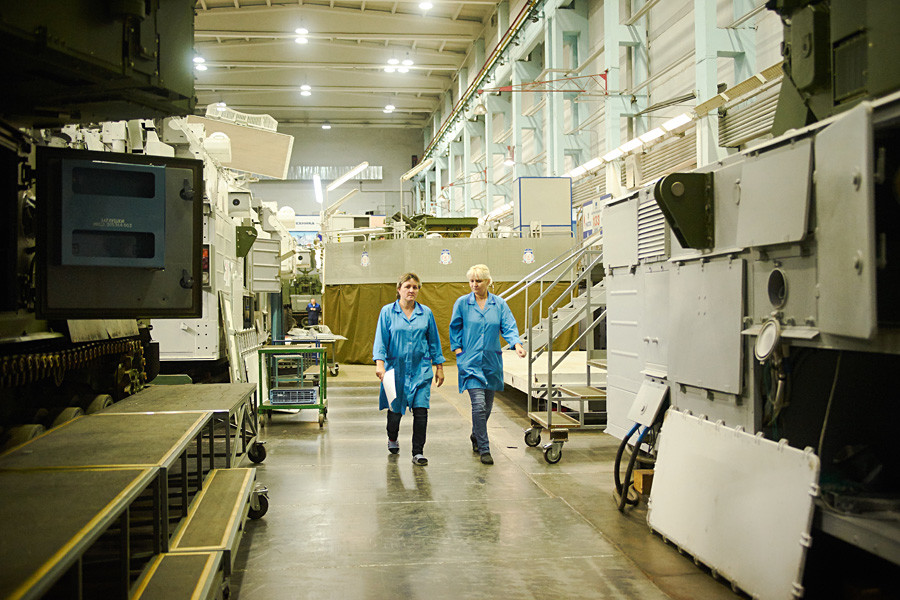 It is a 24-hour operation with two shifts, with each shift doing different tasks.

The mantra of the traffic controller

Inside there’s a heavy, distinct smell of metal - it’s like sniffing a handful of small change. Behind some iron storage there are desks, but few workers are sitting at them. All are dispersed around the huge hangar the size of two football pitches. Behind thick there are machine tools where a solution of some kind is being poured onto metal components.

"This is the metal processing area, but we won't photograph anything here," Sergei tells us.

Ahead is another door, then another, and another one. And then there they are The "sensations" of the MAKS-2017 air show - Tor-M2 air defense systems, standing in two rows with their mechanical bowels exposed. There are wires, metal plates, screws, bolts. The workers, like surgeons, open something, take something out, tighten something, and put something back.  In a measured, slow manner, almost meditatively.

“They will now bring the Man to meet you,” Sergei barks. 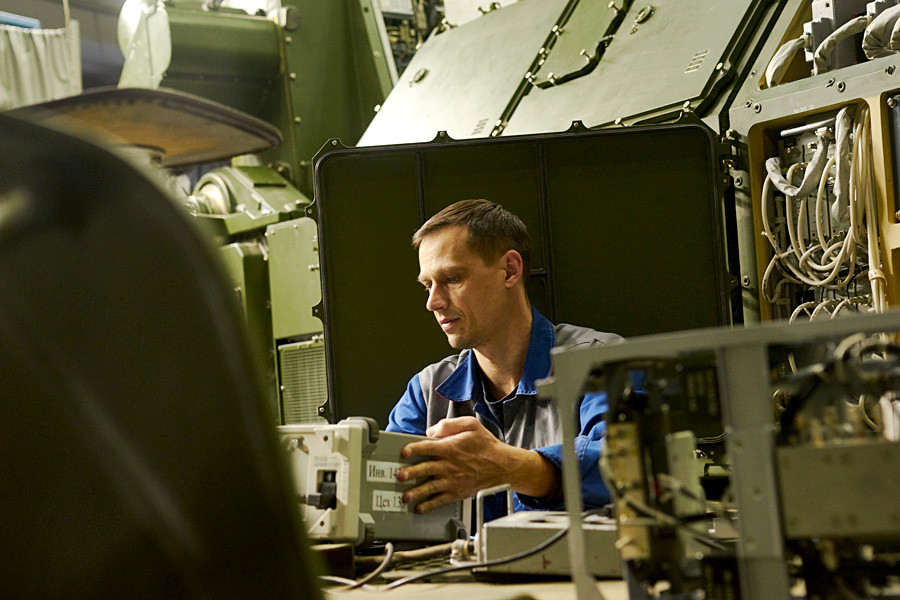 The Man appears quickly. He is well-built and short with a smile that never leaves his face. He looks more like a good-natured allotment gardener whom you would ask for directions rather than a military systems engineer.

"The Tors have always been here [in the workshop] and I've spent all my life with these systems, all 35 years. We have been upgrading the Tor since it was first designed. There’s the Defense Ministry, there are special customers, and we also ship abroad. It is a 24-hour operation with two shifts, with each shift doing different tasks," Alexander Chirkov says, smiling at the Arctic version of the Tor-M2 standing nearby without the chassis that allows it to move around.

"It had a polar bear painted on it when we showed it at the May 9 parade in Red Square. Here it is, the beauty." 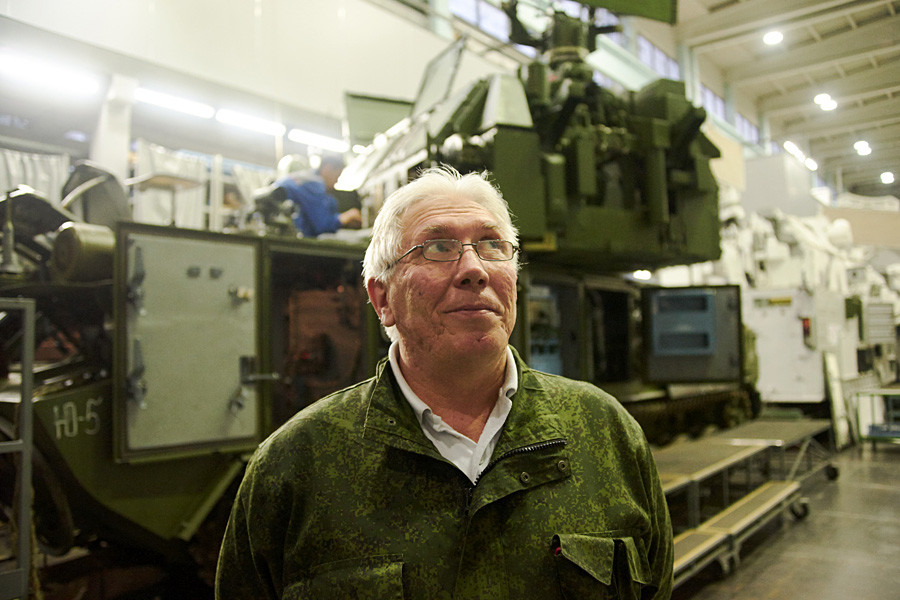 Fifty-nine-year-old Chirkov talks the air defense system as if it were a person. "It takes a long time to get to know it - I've spent all my life getting to know it from all sides - I am never bored with it.” He describes himself as a traffic controller: He comes at eight in the morning, allocates tasks, and supervises the fine-tuning - he checks the products using instruments and then sends the "beauties" to special chambers to test them in temperatures of +50 and -50 degrees Celsius - and for shake tests.

"The system is designed for low-flying and low-velocity targets. The ones that are difficult to detect. They are the most difficult targets. They fly over or over a forest like a bird. It may indeed be a bird or it may be the enemy."

He doesn't say how much one such system costs: An air defense missile system is always the subject of bargaining when it’s built for export. The variation can be huge. Chirkov assures us that he "honestly" doesn't know the price.

There is a huge banner in the workshop that reads: "Perfect hardware - reliable protection." During all his years at the Kupol the situation turned bad only once - in the 1990s. "There were no orders, but we survived," Chirkov says, cutting his sentence short. 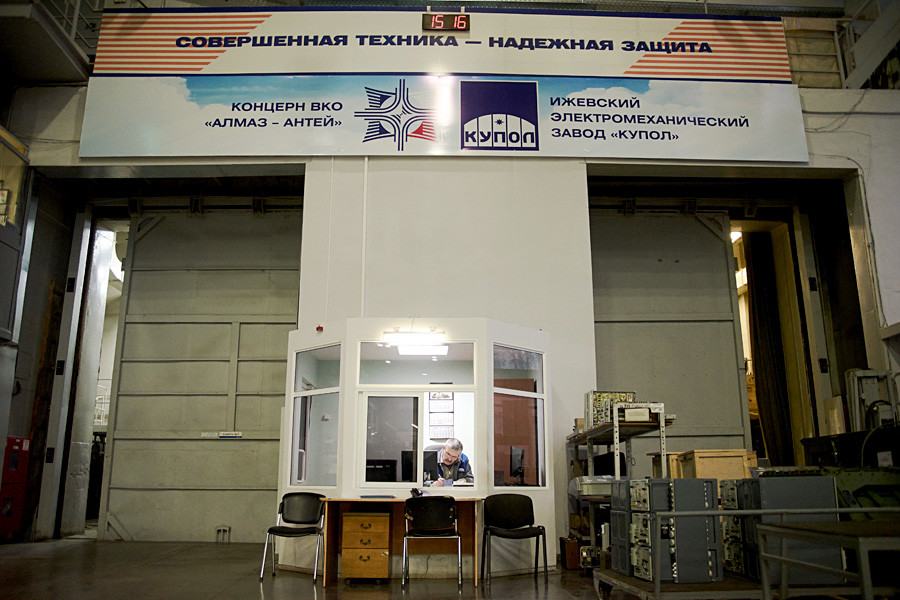 There is a huge banner in the workshop that reads: "Perfect hardware - reliable protection."

Sergei the security man walks past, turning his head from left to right, looking for journalists wandering among the Tors.

"I've told them all the secrets," Chirkov says, trying to pull his leg.

"All of them?" Sergei laughs, but somewhat nervously. But these should be the least of his worries. Chirkov measures his words like a military man and pauses before giving an answer. For example, if you ask him about spies and spy-phobia, you'll hear him say: "There have been no spies. Have I ever been approached? No, I haven't. Have colleagues ever said anything they shouldn’t? No, they haven't."

"Are there things that you can't talk about even with your nearest and dearest?"

"And what do you do about it?"

Chirkov has a rule: "Don't say too much. That is all." It is simply his mantra. 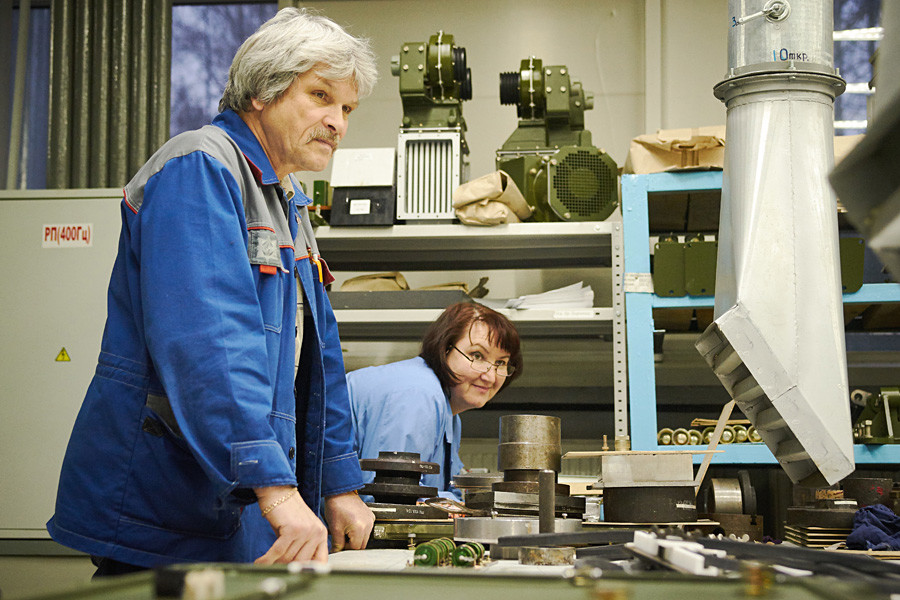 During all his years at the Kupol plant the situation turned bad only once - in the 1990s.

‘Good deeds should have fists’

Chirkov came to Kupol straight after graduating from a technical university - he was "allocated" here. In Soviet speak it means you worked where you were sent, no questions asked. In the catalog of industrial there are over 20 in Izhevsk alone - a pipe plant, a metallurgical plant, a foundry, a ceramics plant, a plant making plastics…

"After you could only go to an industrial plant. They are part and parcel of Izhevsk's history. Udmurtia is a remote region so it’s an ideal place and there has never been anything else here. The city is not big and must have stayed the same for the past 30 years - about 650,000 people. All my family have lived here since the Revolution and all work at industrial plants, including myself and my children." 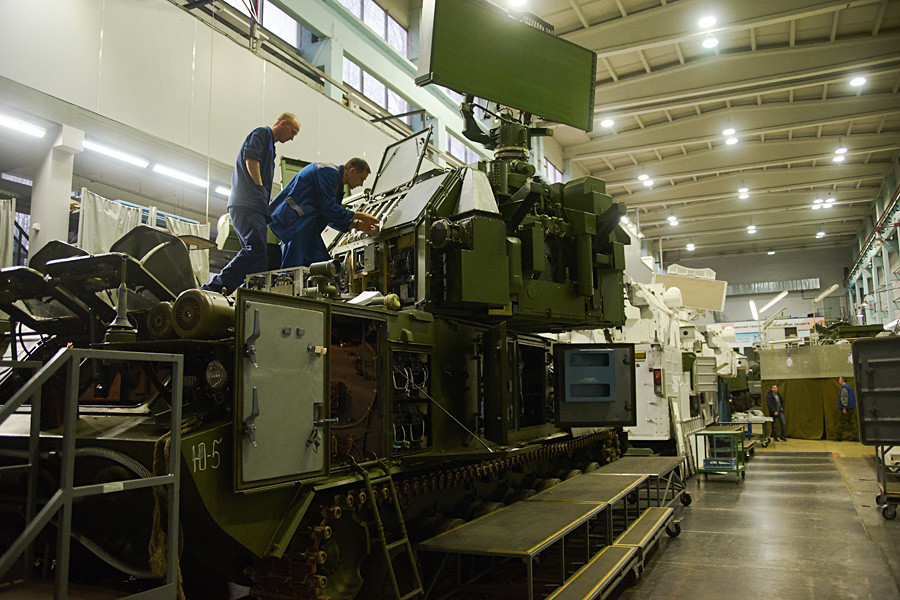 An air defense missile system is always the subject of bargaining when it’s built for export.

Does it mean that in all these 35 years you never wanted to move to a different job?"

Chirkov says he never wanted to move to another job. Moreover, they pay more here. But Izhevsk doesn't let him go anyway. Because he has his children and grandchildren and his apartment here… Because he was "born and bred" in Izhevsk. And, in actual fact, he loves his job. 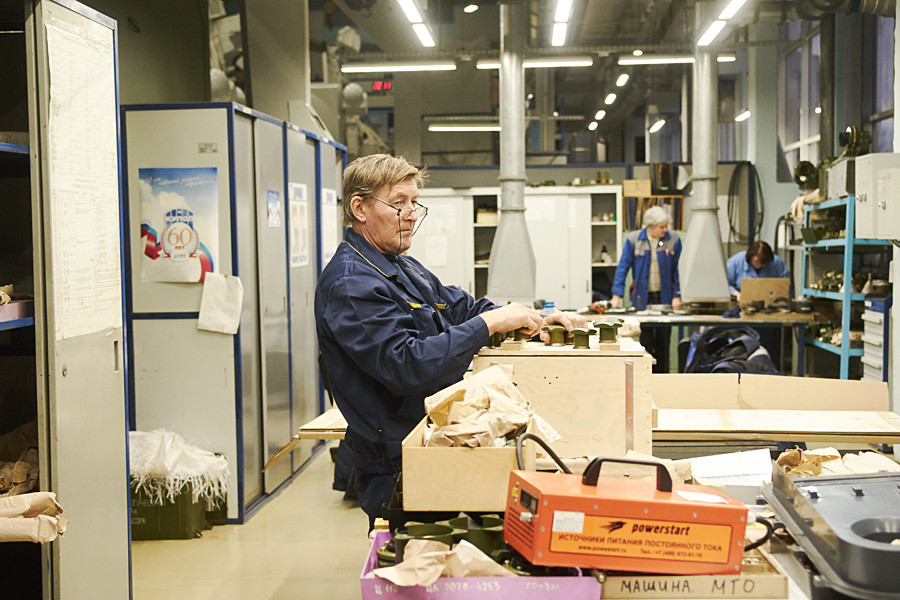 They came to Kupol straight after graduating from a technical university - was "allocated" here. In Soviet speak it means you worked where you were sent, no questions asked.

"I have only one dream. To travel. I still won't be able to travel to any capitalist country for five years after I retire. The whole of Europe is closed to me. And I love traveling. When I was by the Red Sea, I saw such wonderful things. Super! I posted on YouTube later how I stroked a moray eel."

Chirkov's eyes light up, and he has the smile of a Cheshire cat. He gestures against the backdrop of the Tor to show me with his hands how big his moray eel was. Sergei finally manages to bring everyone together in one group.

Once again we pass through Workshop No 133 where they process metal. For some reason, now, an hour later, you are allowed to film here.

"Any regrets?" I ask Chirkov who is pensively looking through me.

He replies - this time, immediately.

"Yes," is all he says. Although later, after the recorder is switched off, he will add that there are things more important than personal regrets. There are imperatives like "good deeds should have fists" - a Russian saying meaning that words have to be backed up with force and that he, as it were, is someone on whom it all depends. 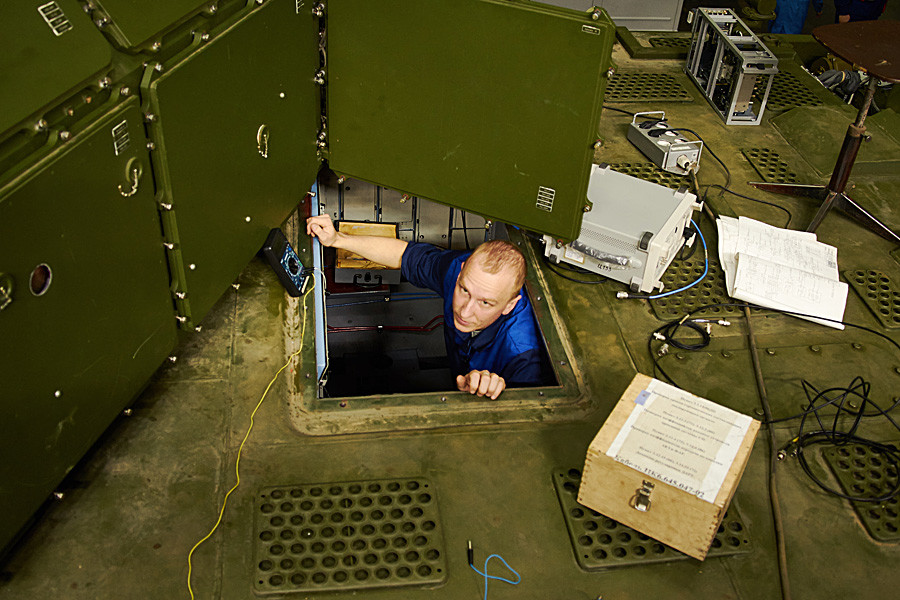 "There have been no spies. Have I ever been approached? No, I haven't. Have colleagues ever said anything they shouldn’t? No, they haven't."