'They come for a haircut, we go to the aqua park' — life on the edge in Russia’s border regions 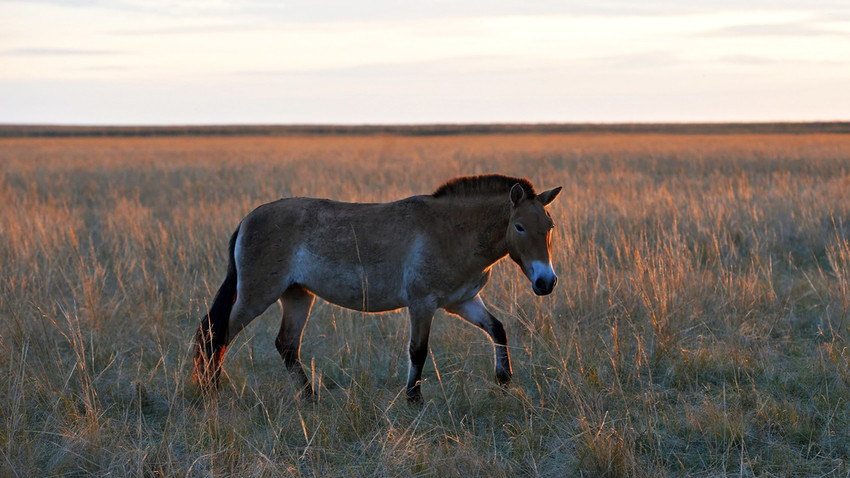 “It's the year-long wind. Orenburg is surrounded by steppe 100 km in all directions”

Russia's Svetogorsk (900 km from Moscow) lies just one kilometer from the Finnish border. Before 1948, the town, originally called Enso, actually belonged to the Finns. Either way, the key industry here has always been paper production. Timber trucks shuttle in and out endlessly.

Despite Svetogorsk’s proximity to Finland, surprisingly little has changed since Soviet times: prefab apartment blocks, four supermarkets, and a pulp and paper mill owned by the US company International Paper—essentially a factory town. Perhaps that’s why the Americans are usually blamed for the lack of change, and not the local authorities: most of all, the locals want to see urban development. The town is home to numerous neglected Lenin monuments, but there is no cinema or maternity hospital (expectant mothers have to travel to Vyborg, 137 km from St. Petersburg). 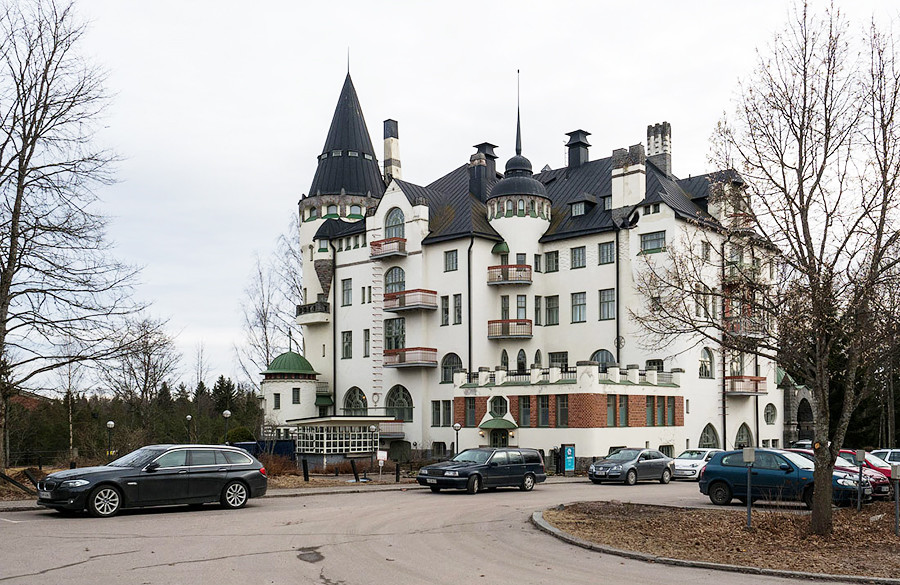 A regular bus service runs between Svetogorsk and the Finnish town of Imatra, and a constant stream of tourists plies the route. Both Finns and Russians require visas to cross the border. Finns come to Russia for cheap gasoline, medicines, and alcohol. “But that’s not all. They get their hair cut here. Back home, it’s expensive. Some even have a massage,” says (in Russian) Irina Berdnikova, a local social activist. Russians travel to Finland mainly on shopping tours, as well as to stock up on food and visit the local aqua park.

Before the sanctions war with the EU and the ruble’s dip in value, Russians bought up cottages in Imatra, says Katri Ikavalko, a reporter for the newspaper Uutisvuoksi, and helped to keep local supermarkets afloat. But lately some Finnish shops on the border with Russia have had to close, even supermarkets such as Lapland and Scandinavia.

Irina describes Svetogorsk as a “town of newcomers.” Many families came to work at the plant and settled in order to receive housing. “They said that it was temporary, that they'd get an apartment and then sell up, but instead they stayed.”

Russia’s Altai, Siberia, and Far East all share a border with China. Every day more than a thousand tourists journey from Russia’s Blagoveshchensk (7,858 km from Moscow) to China's Heihe—a free visa-free zone operates between the two cities. The distance between them is just 800 meters. In summer, the main mode of transport is by river, while in winter a pontoon bridge is put up. A permanent motor bridge across the Amur is under construction and slated for completion in 2019. Blagoveshchensk residents have been dreaming about it for more than two decades, since the lack of such a structure is an obstacle to their city’s economic development. Before the collapse of the ruble in 2014, Blagoveshchensk was home to a thriving shuttle trade, which also greatly benefited Heihe, growing from a small village into a developed city. Russians were particularly keen on buying fur coats. 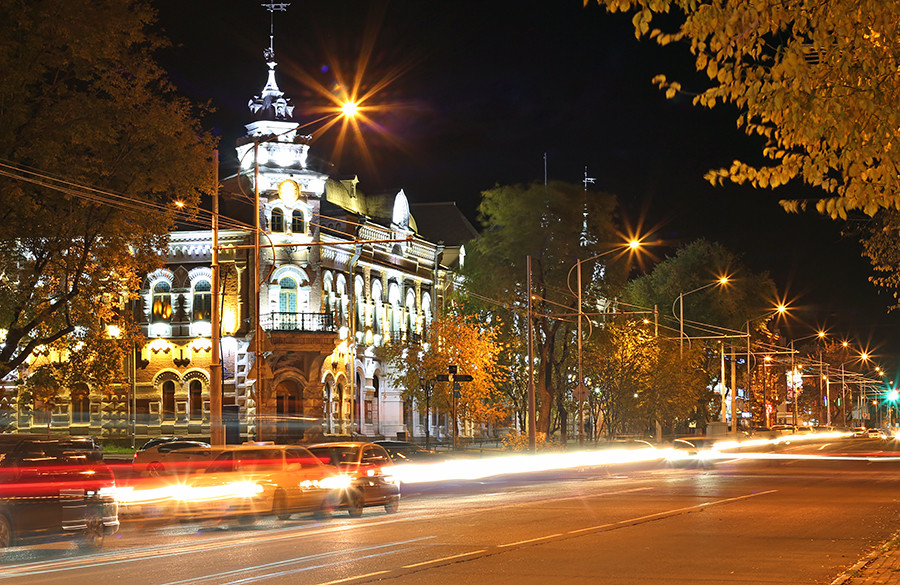 Chinese people (those that aren’t super-rich) go to Blagoveshchensk to work in construction and study. And to trade, of course.

Pretty much every new microdistrict in Blagoveshchensk is built by Chinese labor, even if the investors are Russian, says (in Russian) Konstantin Titov, head of the legal service at the Chinese construction company Great Wall, which operates in Blagoveshchensk. Therefore, quotas were introduced to protect the local market. Similarly, the city has been eating Chinese food and wearing Chinese clothes for as long as anyone can remember. And while central Russia discusses sanctions and bans, here such things are not even mentioned.

“It’s a paradoxical situation for the generation born 1985-95. My daughter, for example, has been to places like the Philippines, China, and Thailand, but never to Moscow or St. Petersburg. And all because flights to European Russia are three times more expensive,” says Titov.

Many try to find work in China, even without knowing the language. They act as intermediaries on China’s largest online platforms like Taobao and Alibaba. “It’s pretty straight forward: someone in Russia needs a particular product, the intermediary finds it online, buys it up, transports it across the border, and hands it over to the buyer,” explains (in Russian) the local news outfit Amur.info. For some reason, the Chinese are not keen to teach their language in Blagoveshchensk, believing instead that the Chinese should learn Russian. What’s more, rumors that the city is “flooded” by Chinese are greatly exaggerated—in Blagoveshchensk there isn’t even a Chinatown. 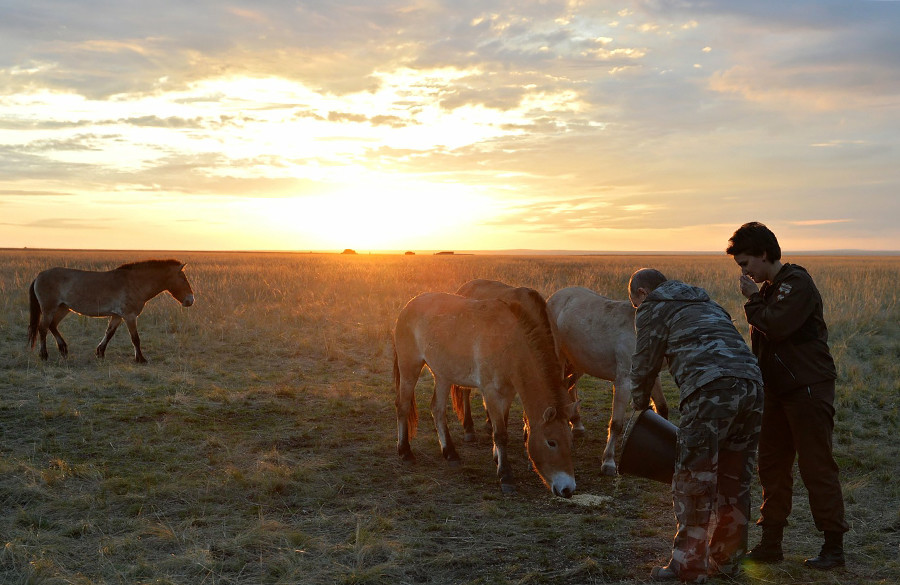 Only an hour’s drive from Orenburg (1,456 km from Moscow) to the Russian-Kazakh border, this is one of the main Russian-Kazakh “corridors,” not to mention a gateway between Europe and Asia: columns of heavy trucks line up at the border in both directions.

In the heart of the city, modern high-rise buildings jostle with traditional wooden houses, for which reason the city is described as a “sprawling village.” There is no daily commotion, monstrous traffic jams, or staggering salaries. The main high-rise building in the city belongs to Russia’s largest energy company, Gazprom, which has been producing gas here since the turn of the millennium.

Residents’ chief complaint is the weather: “It's the year-long wind. Orenburg is surrounded by steppe 100 km in all directions,” says resident Leonid (in Russian). Meanwhile, local livestock pay little heed to the concept of state boundaries. The animals wander across the border at will, and the task of catching the “migrants” falls to the district police, who ride across the steppe in search of wayward cattle. Their Kazakh colleagues do a similar job.

The Russian-Kazakh border, at almost 6,000 km, is the world’s second longest (after the US-Canadian border). There is no barbed wire or demarcation strip—just a few border poles are installed here and there, and, even less frequently, radar towers. In the early 2000s, says resident Tatiana, it was possible to take any steppe road into and out of Kazakhstan without passing a checkpoint. After the collapse of the USSR, the region was a conduit for supplies of heroin, opium, and hashish to central Russia.

Today, the border is far less transparent: operatives keep tabs on radical Islamists from Central Asia and drug trafficking. A simplified procedure is in place for residents of border settlements wishing to hop across. For everyone else in the two countries, the border crossing is made either by automobile through a checkpoint or by train under a visa-free arrangement (which, incidentally, also exists for many EU countries, the USA, Australia, Canada, Japan, etc.).

Some say the city is depressing, others disagree: “Gazprom isn’t going anywhere, and neither is the city’s geographical location. Being on the border means serious money-making opportunities. What’s more, since the beginning of perestroika, higher education has been a developing trend. Orenburg State University, for instance, is one of the largest in Russia.”

Russia has another border settlement which, unlike the ones mentioned above, is very difficult to reach. It’s not just a matter of distance or logistics: you literally have to travel back in time.