Why are Russians so obsessed with local history and house museums? 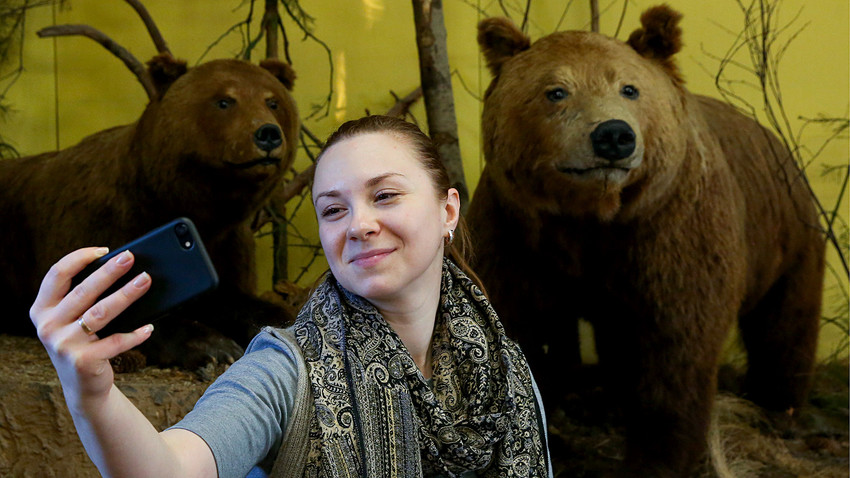 Alexander Ryumin/TASS
These are not merely derelict houses guarded by grim, state-employed babushkas. Local history museums are sanctuaries of the Russian, Soviet and post-Soviet pasts, and sometimes they’re the only places to see exhibits that are not significant for major museums but which still have nostalgic and aesthetic value.

There’s a house near the end of the village. Whether old and rickety, or beautifully restored, it always contains roughly the same exhibits: a stuffed bear with zonked-out glass eyes; two stuffed local hares - one in winter fur, the other in summer; a fox that looks like it’s on prescribed medication; and a melee of dried local herbs and sprigs. In a dimly lit room, there are faded posters with a lengthy history of the place, with great emphasis on the struggle of the working class. One can also glimpse a few portraits of local celebrities, most born well before 1950, along with a quote from a mediocre local poet. Presiding over all this are a corpulent bespectacled administrator and a janitress armed with a sooty washcloth. These are the rulers and keepers of the local history museum. 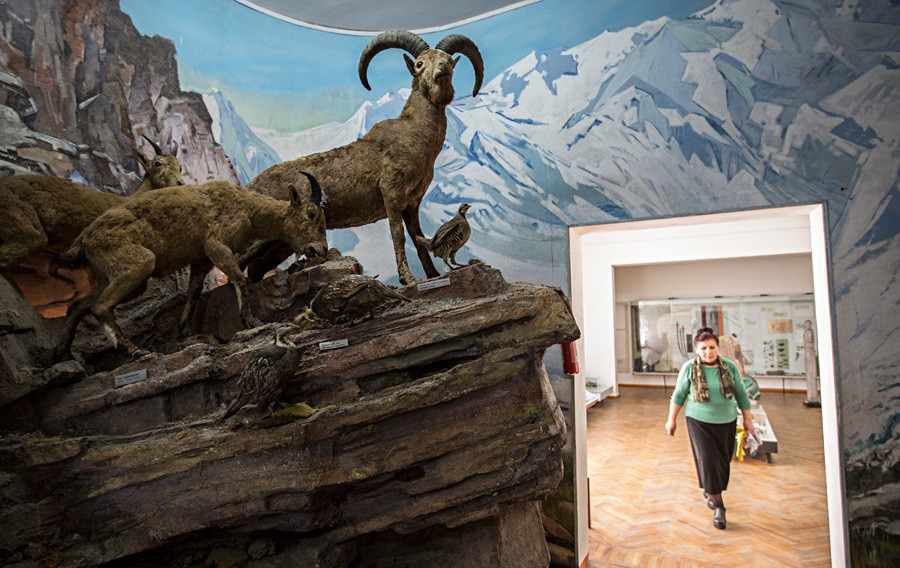 Yes, that’s what it is, and it can be found in almost every mid-size town in Russia. There are over 800 local history museums in Russia, as well as also over 130 house and apartment museums that commemorate the lives of writers, explorers, scientists and revolutionaries. Sometimes, the house museums don’t own a single piece of furniture or personal item that belonged to the celebrated hero, so instead, they try to “recreate an atmosphere of the epoch.” Perhaps most important, they serve as cultural spots and places of interest in towns and villages where such events are otherwise scarce.

History at the Tsar’s order 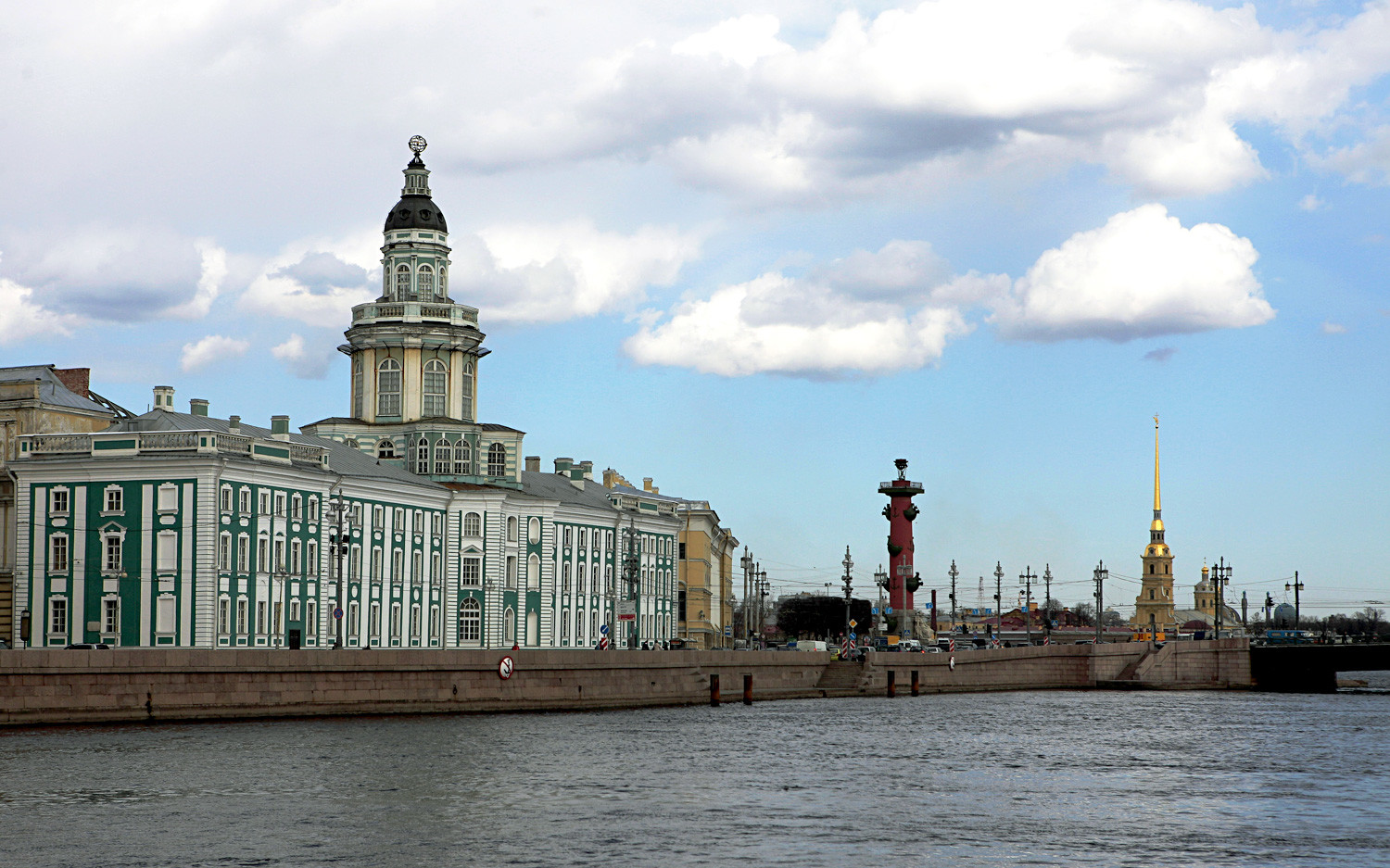 Kunstkamera (the Peter the Great Museum of Anthropology and Ethnography of the Russian Academy of Sciences, the first Russian museum)

Like with many things in Russia, it all began with Peter the Great, who ordered people to submit old and unusual things, including bones and weapons, to the Senate for a reward. This was done in order to fill Peter’s favorite Kunstkamera, Russia’s first museum. Later in the 18th century, the Russian Academy of Sciences began ethnographic expeditions to the empire’s distant regions, and ordered local authorities to send to the capital information “on forests, rivers, lakes, minerals, fairs and mills, etc.” Descriptions of these regions were made, and in 1782 the first local history museum opened in Irkutsk.

Up until the mid-19th century, only a few people understood the significance of local history. Then, Nicholas I (reign: 1825-1855) obliged authorities in all governorates to publish local newspapers. This inspired local amateur historians to gather sources and memorabilia, and to publish articles about their findings. Meanwhile, local churches gathered and stored artifacts and relics. Most significant art treasures, however, were in the nobility’s country estates.

Revolution: the mother of all museums 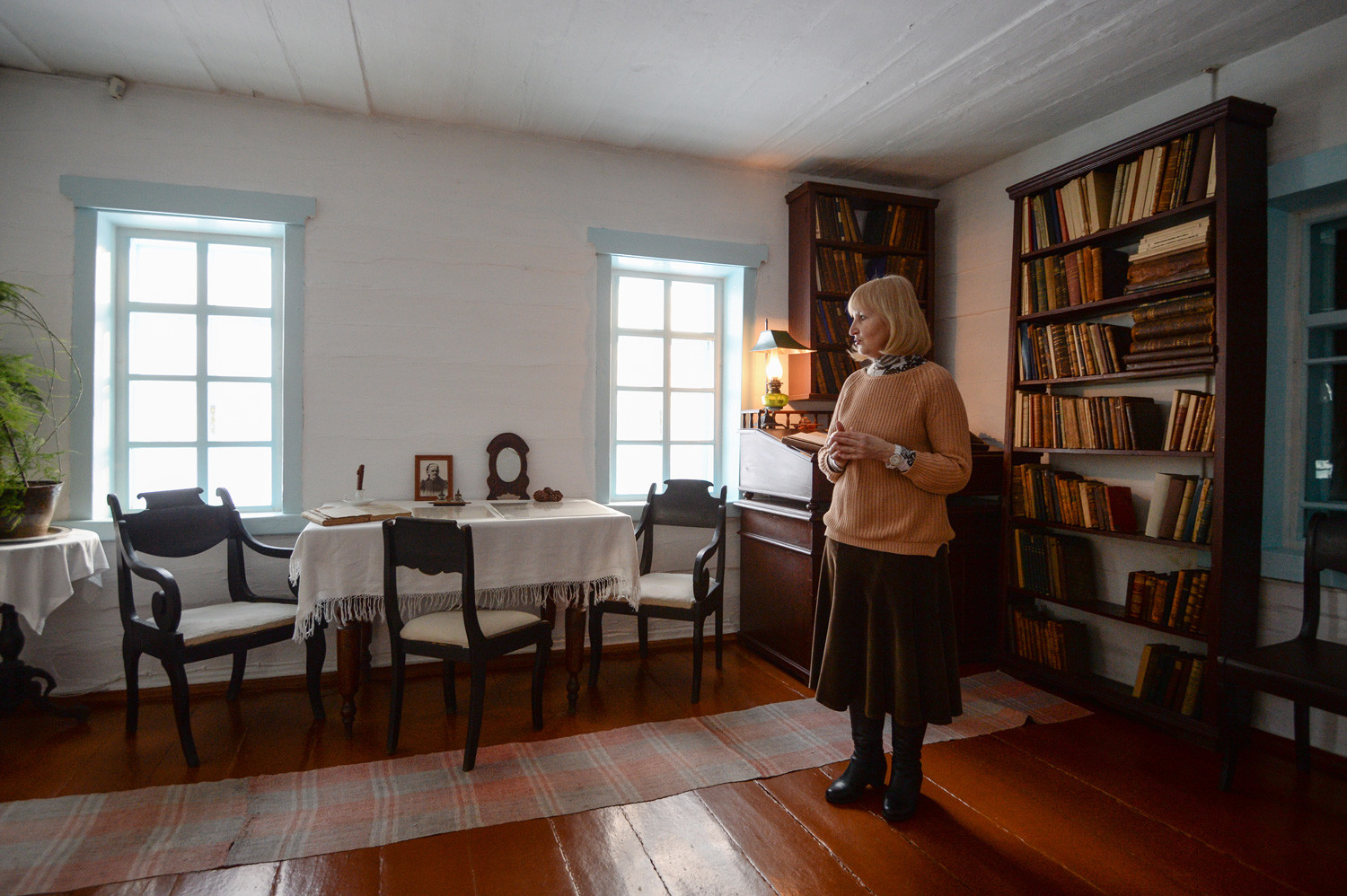 A museum worker in the house where political exile Vladimir Ulyanov-Lenin lived from 1898 to 1900. The Shushenskoye historical and ethnographic museum-reserve, Krasnoyarsk region.

After the Revolution, churches were closed and the luxurious estates were nationalized. Those treasures of the nobility not ravaged in the turmoil of the Russian Civil War became state property. Local museums were filled with loot from noble manors, churches and monasteries. Bolshevik officials, however, didn’t have the knowledge to supervise the museums. So they turned to “former” people, those educated in Tsarist times, who could continue the work. Some members of noble families became keepers of the museums that were located in their former living quarters. 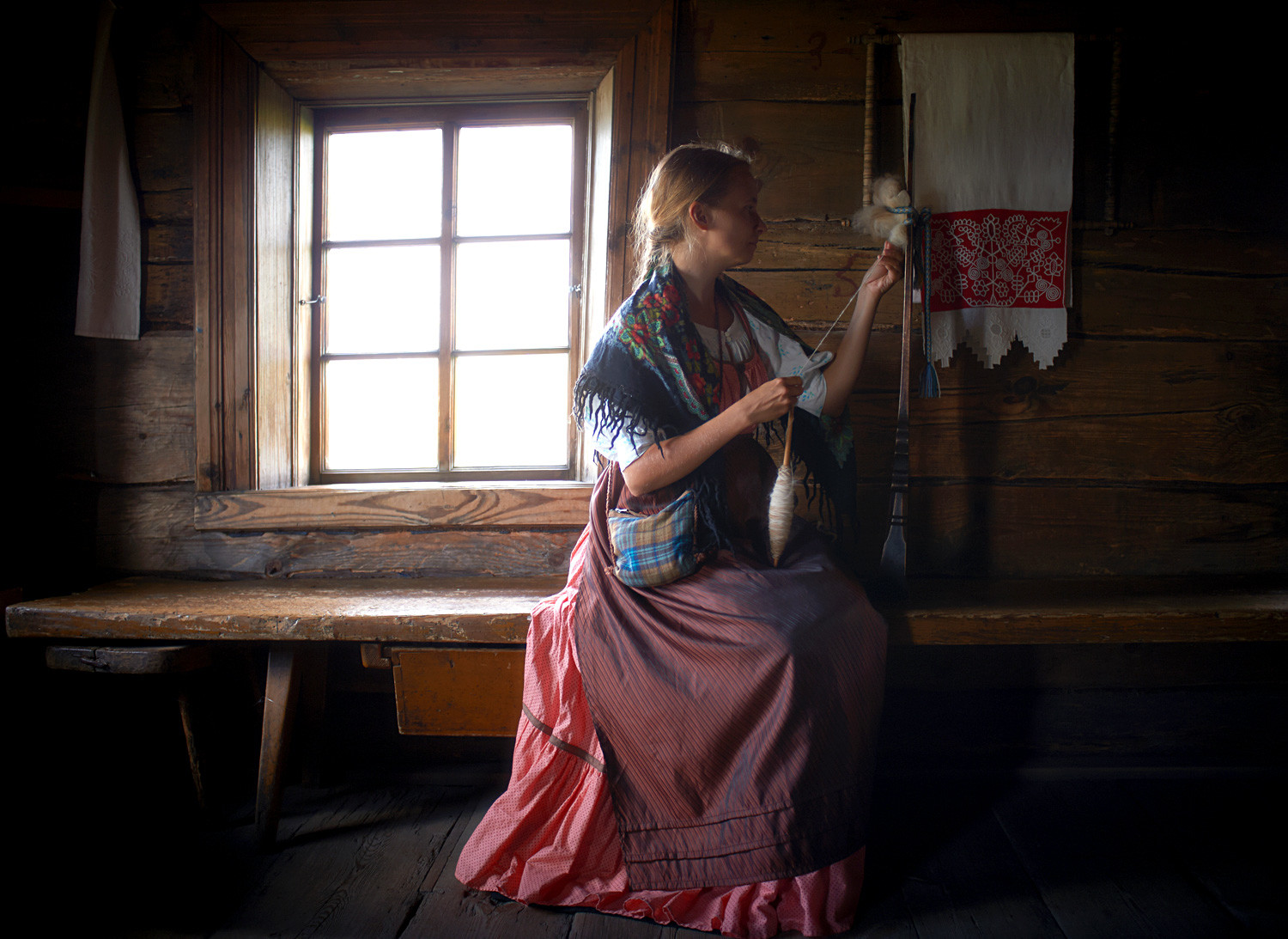 A woman in national clothes spinning yarn in the Kizhi State Historical-Architectural and Ethnographic Museum Reserve.

In the beginning of the 1930s, many of these “former” people were condemned to repression. Since then, the local museums sought not to preserve the past but to condemn it, and to glorify the communist future. Exhibitions now began to tell how Soviet people were marching toward communism, and local history began “to study the productive force and natural resources of our country.” In the 1930s, Lenin’s wife Nadezhda Krupskaya, deputy head of the People's Commissariat for Education, issued a ridiculous statement that called for destroying all pre-revolutionary literature. Lucky for Russian history, this insane order was largely neglected.

The ‘Thaw’ and beyond

The postwar generation found new interest in local history, and groups of urban dwellers started traveling to rural Russia, looking for derelict churches and manors. Some were researchers, while others were scavengers looking for valuable items. Unfortunately, many ancient icons, books and furniture were lost during this time to private and foreign collectors.

Slowly, the history of Russia returned to local museums in the form of wax figures of villagers in national costumes doing their daily chores. In many museums the faces of wax figures were modeled after real villagers, so the museums also silently became memorials of the Russian peasantry. 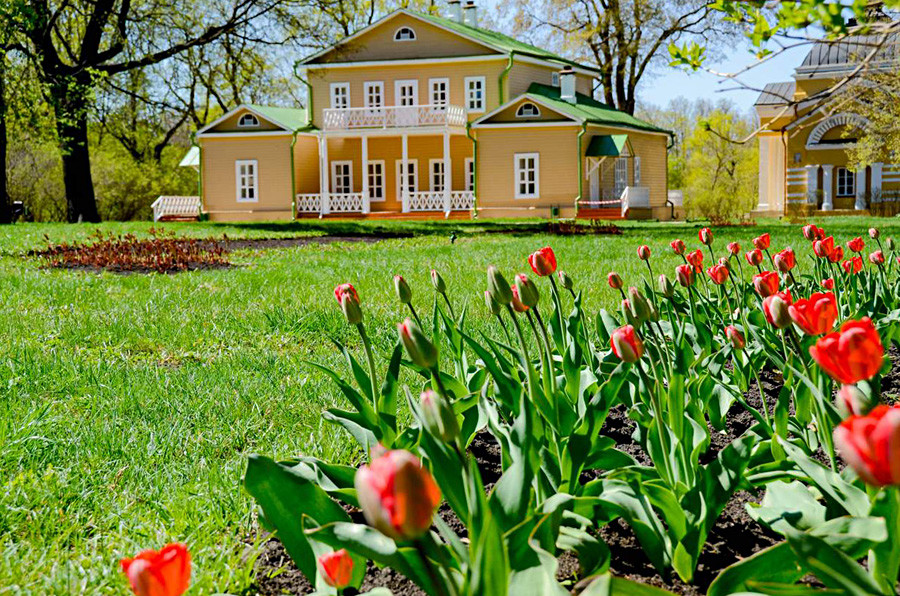 The most popular local museums are those dedicated to great 19th century Russian writers. Russia Beyond contacted Liliya Tikhonova, a former guide at the Tarkhany Estate, where poet Mikhail Lermontov spent his childhood at the side of his grandmother, Elizaveta Arsenyeva. Today, local traditions are recreated as part of a guided tour around the estate.

“The tradition of a ‘Tarkhany wedding’ was recreated based on the recorded memoirs of local villagers. These weddings were notable for local songs and the use of traditional wedding ornaments. These days, young couples visit Tarkhany to be married in this peculiar style,” said Tikhonova. 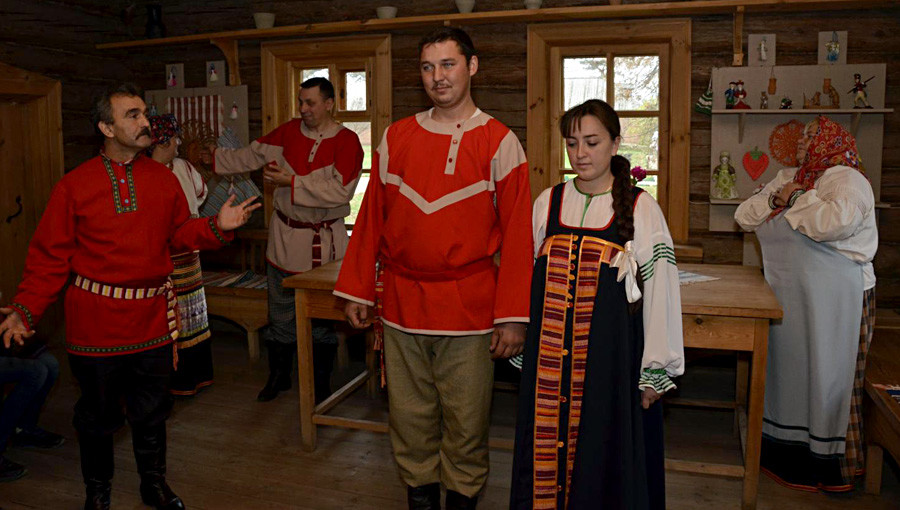 A part of Tarkhany wedding ceremony.

House museums are also places where private home traditions live on. In Tarkhany, one such tradition was carefully preserved. ”Elizaveta Arsenyeva, Lermontov’s grandmother, loved to drink tea in a remote rotunda in her garden. Today, on notable occasions such as the birthdays of Lermontov or Arsenyeva, museum staff organize tea for guests in the same rotunda,” said Tikhonova, adding that these small traditions keep alive not only the museum, but also the house. 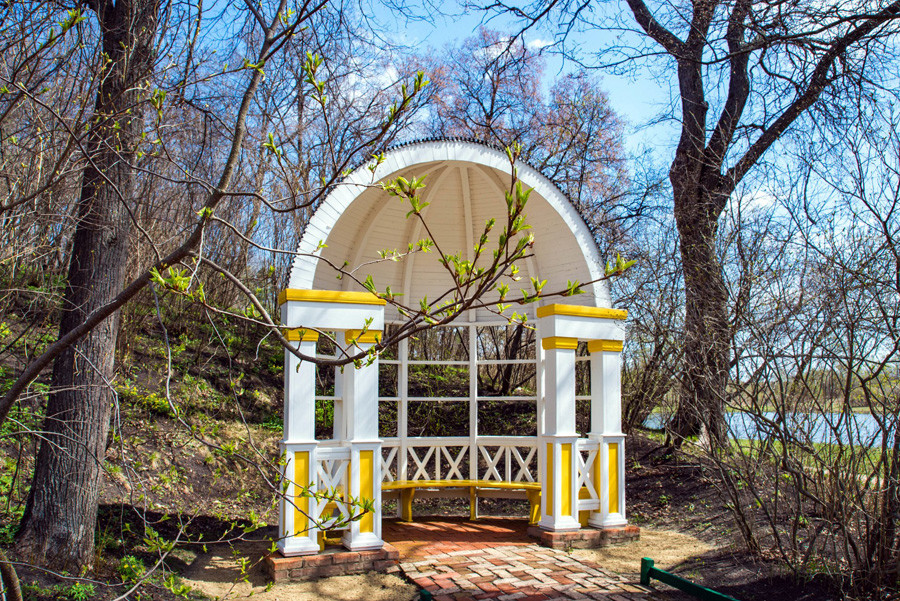 It’s easy to tell which local history museums are most interesting – usually those in the oldest towns and cities. As far as the house museums of famous people, it’s more complicated, but we already covered this for you. You can check out our article on 10 foreigner-friendly house museums of Russian writers, or take a visual tour of Ryabushinsky’s art nouveau mansion in Moscow, where Maxim Gorky spent his last years. Among Russia’s most interesting are Alexander Pushkin’s memorial apartment in St. Petersburg, and theSergey Dyagilev house museum in Perm. The memorial flat of Anna Akhmatova in the Fountain Housealso offers a rare glimpse into the daily life of postwar Leningrad (St. Petersburg), and Mikhail Bulgakov’s apartment on Patriarch’s Ponds in Moscow (mentioned in our article) is the famous “no-good flat” described in the novel, “Master and Margarita.”