Surprised by Russia: Why didn’t Trump build his tower in Moscow? 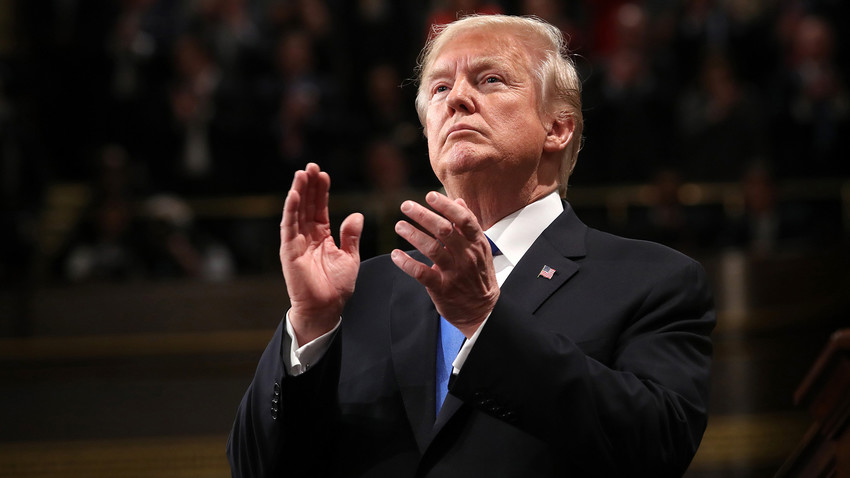 Recently there’s been much talk and speculation about U.S. President Donald Trump’s ties with Moscow

Reuters
Over the past two years there’s been much talk and speculation about U.S. President Donald Trump’s ties with Moscow. Some of his past dealings with Russia are shrouded in mystery, and there have been strange events such as meeting a Gorbachev impostor, as well as failed efforts to erect a massive hotel in Moscow and a colossal Russian-made statue in New York.

In 1987, Donald Trump made his first visit to Russia, which at that time was the USSR. The billionaire developer came to Leningrad (now St. Petersburg) and Moscow at the time of great social and political reform known as Perestroika.

“It’s a totally interesting place. I think the Soviet Union is really making an effort to cooperate in the sense of dealing openly with other nations in opening up the country,” Trump wrote about the visit in his 1987 book. 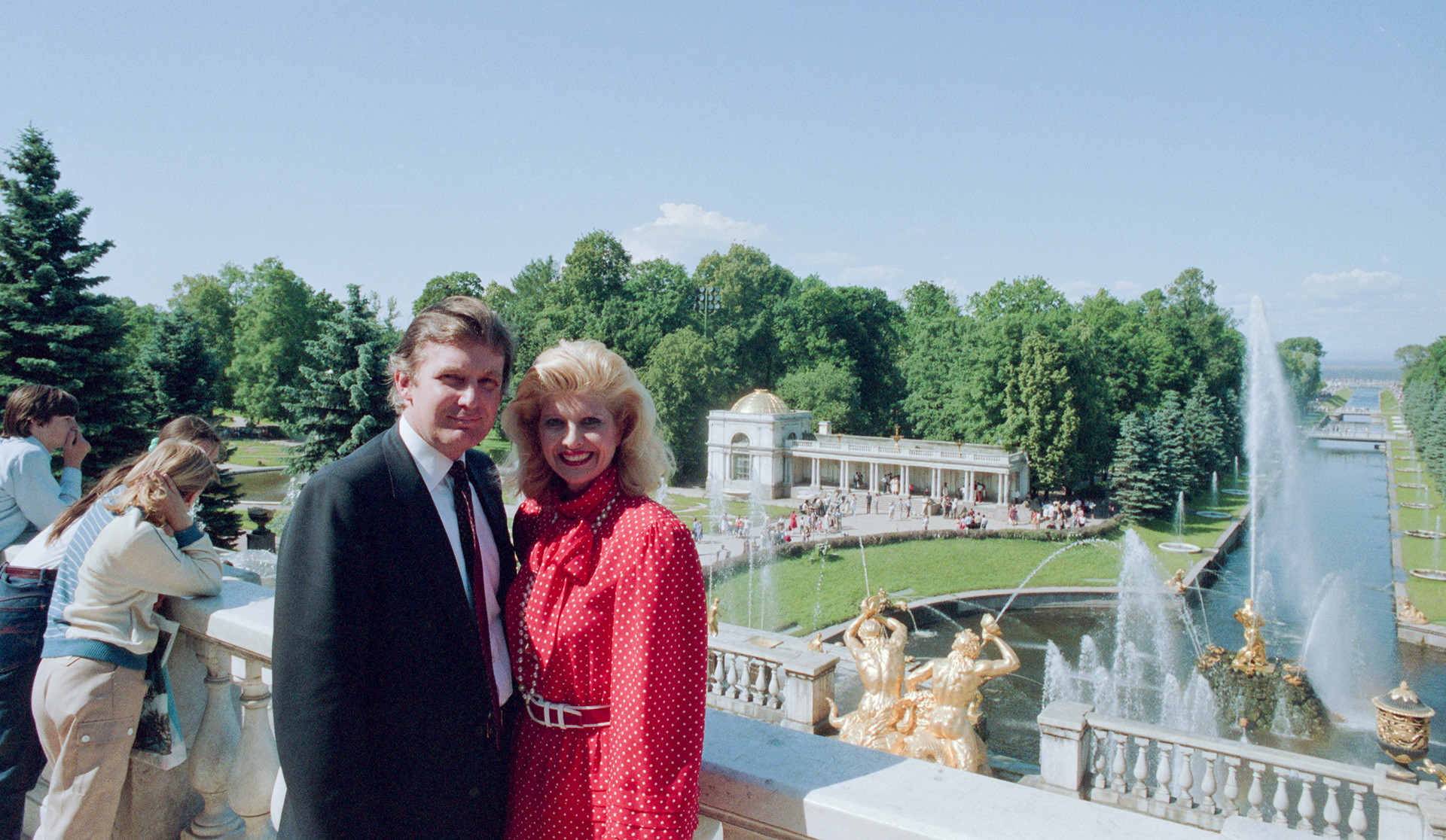 Donald Trump made his first visit to Russia in 1987, at the time of great social and political reform known as Perestroika

He came to Moscow with the idea to build a “large luxury hotel across the street from the Kremlin.” This project originated during a meeting with Yuri Dubinin, the Soviet ambassador to the U.S. According to his daughter, the Soviet official was fascinated by Trump Tower, the 58-story edifice on Fifth Avenue that had just been built, and Trump suggested building something similar in Moscow in partnership with Soviet authorities.

Trump’s visit to the USSR, however, did not push this plan forward, and according to media reports the billionaire was betting on Gorbachev to help during his first visit to the U.S. in December 1988. There were rumors in the media that the Soviet leader would meet with Trump and visit the tower. Sure enough, on Dec. 6 a limo stopped in front of the tower and a person resembling the Soviet leader stepped out and started speaking with the crowd. Trump came out and shook hands with the person saying “Great, great honor.” Then he was told that he had just been pranked. Trump later claimed that he hadn’t been fooled by the impostor, but the journalist who pulled it off was convinced that he had been. 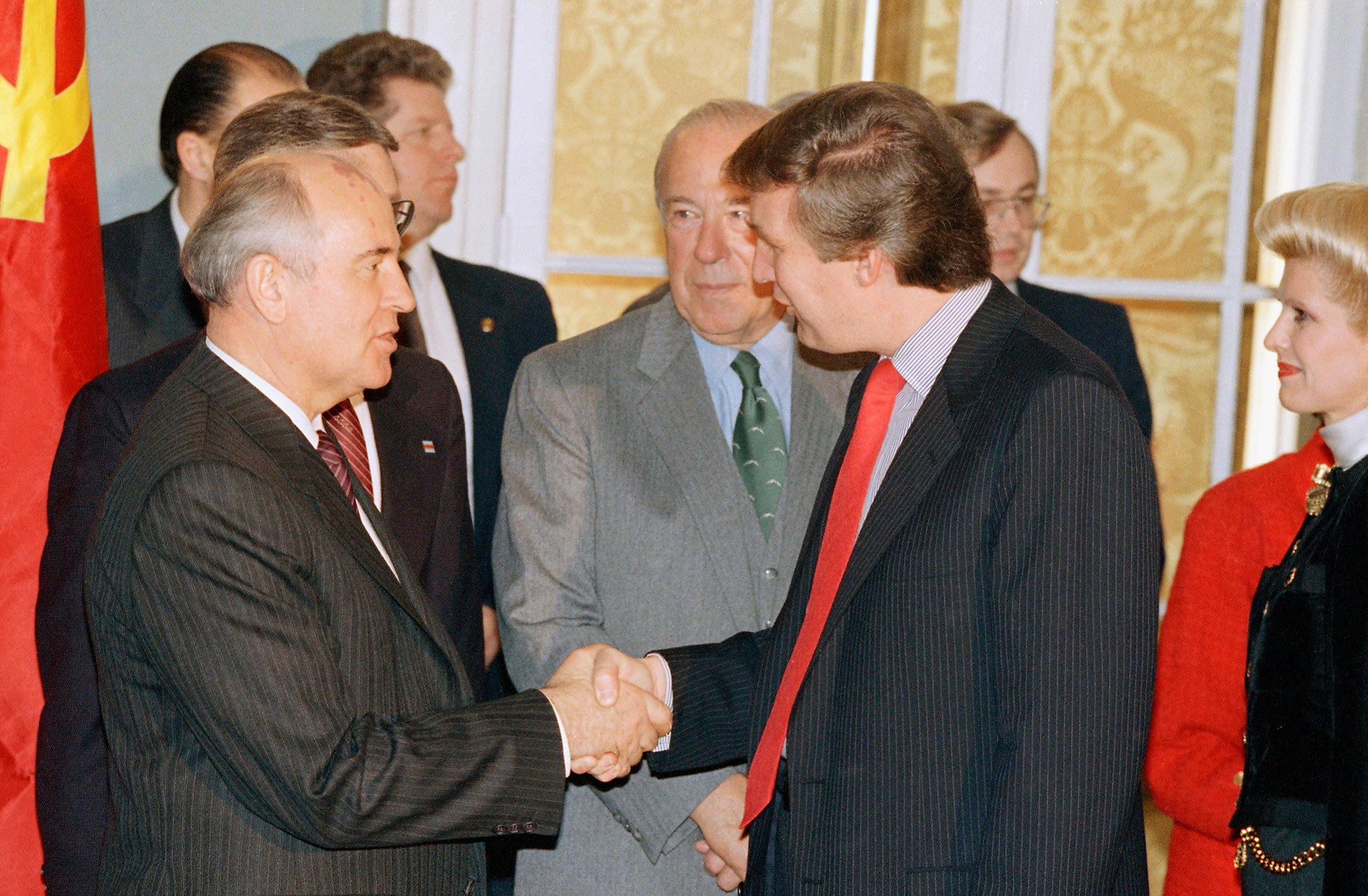 “That's my problem with Gorbachev. Not a firm enough hand," the billionaire said in an interview with Playboy magazine in 1990

Trump met the real Gorbachev later at a State Department reception, but the USSR’s demise was already in motion. The mogul no longer had nice words for the Soviet leader. “Russia is out of control and the leadership knows it. That's my problem with Gorbachev. Not a firm enough hand. [...] Yet Gorbachev is getting credit for being a wonderful leader - and we should continue giving him because he's destroying the Soviet Union," the billionaire said in an interview with Playboy magazine in 1990. Later, Trump’s advisers, according to the Russian media, blamed the failure of Trump’s Moscow project on complicated Soviet legislation.

There was another idea similar to Trump Tower in Moscow: erecting a colossal Russian-made statue in New York. A huge Christopher Columbus was made by the Russian-Georgian sculptor, Zurab Tsereteli, an artist known for ambitious projects. His most famous is the 98-meter-high statue of Peter the Great on the banks of the Moscow River, about a mile from the Kremlin. 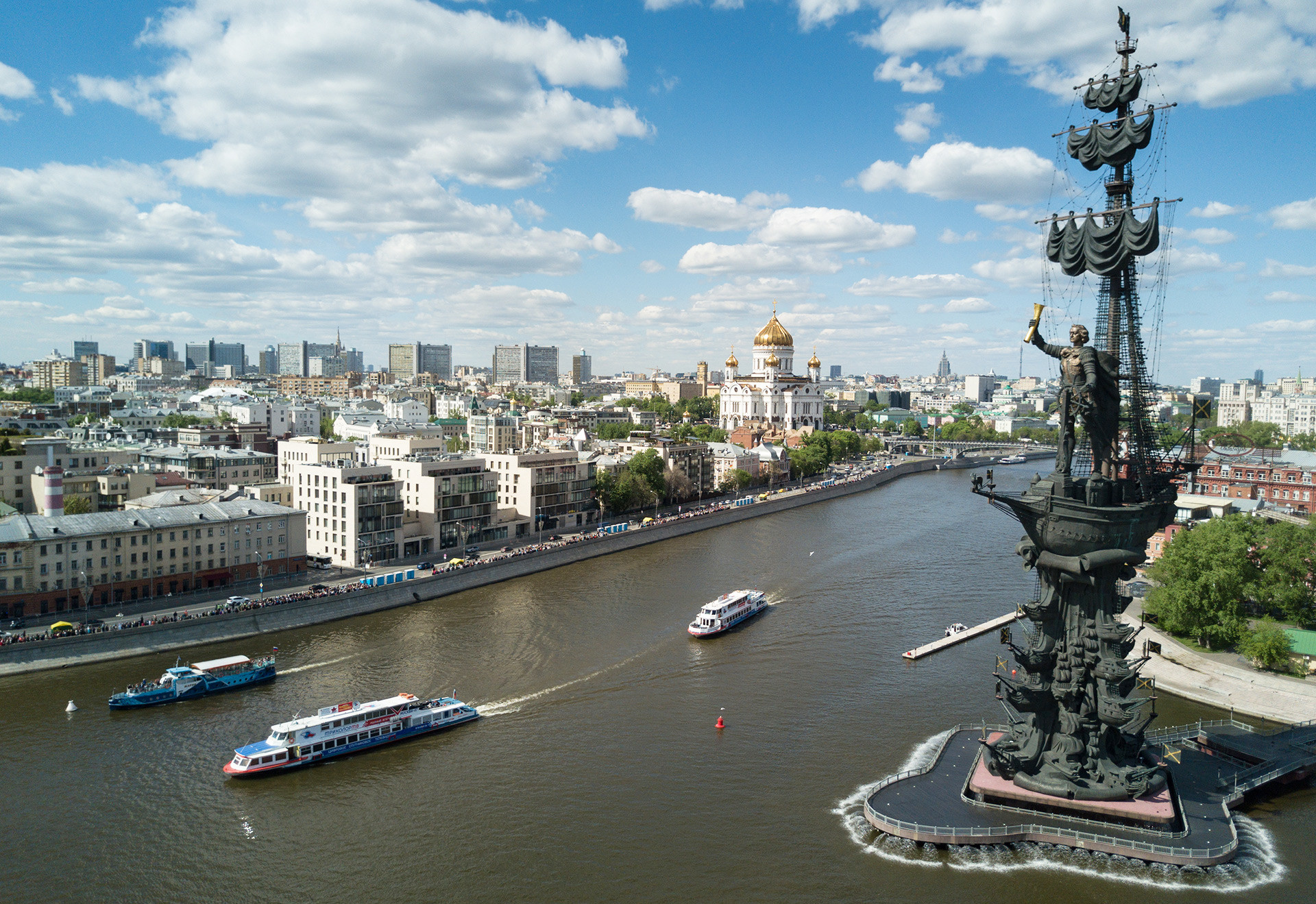 Tsereteli's most famous project is the 98-meter-high statue of Peter the Great on the banks of the Moscow River, about a mile from the Kremlin

That monument appeared the same year as the 126-meter-high Columbus project was being discussed. It was much taller than the Statue of Liberty, and Trump supposedly said he’d like to have it for his development on the Hudson River on the west side of Manhattan. The project was already in full swing, and in May 1997 Columbus’ head arrived in the U.S. The city government of New York wasn’t impressed with this gesture by the Russian government, (the statue was its gift), and did not give approval for installation. There’s speculation that Peter’s statue is actually a recycled version of Columbus (allegedly the quick-thinking Tsereteli replaced the head).

The statue, nicknamed “Chris Kong,” because of its massive size, finally found a home in Puerto Rico. The route to the poor Caribbean island was not an easy one, however. After New York rejected it the Florida cities of Fort Lauderdale and Miami also refused the project, as did the city of Columbus in Ohio. 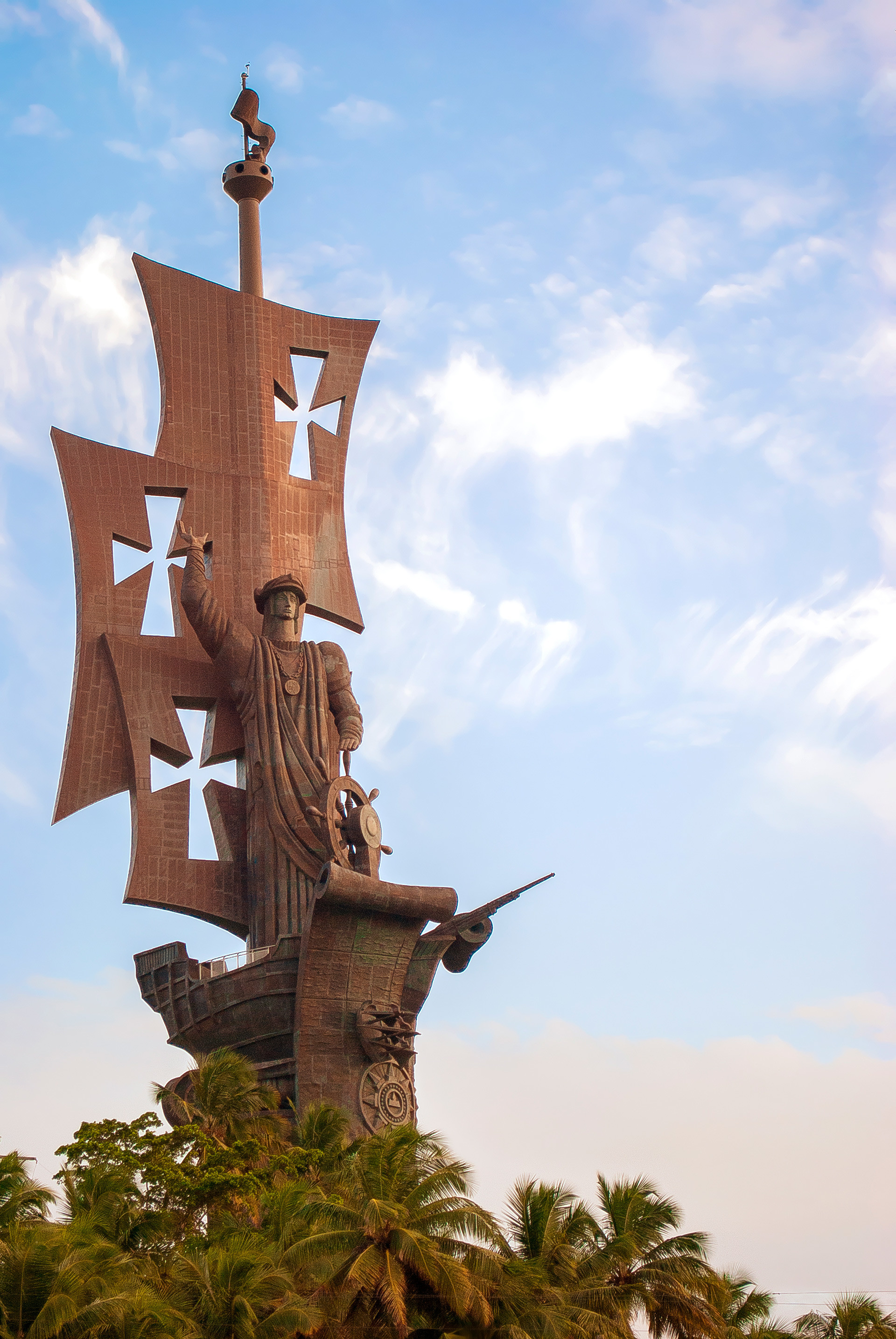 The statue of Columbus, nicknamed “Chris Kong,” because of its massive size, finally found a home in Puerto Rico

Trump apparently didn’t take Tsereteli’s Columbus seriously. Talking to a journalist at the New Yorker magazine in 1997, he called the whole story “bullshit.” Probably, the same description could refer to Trump’s real estate projects in Russia – there were many in the last three decades, including plans to rebuild the Hotel Moscow in the heart of the Russian capital.

The last news about Trump’s real estate projects in Russia came during his last visit to Moscow in 2013 for his Miss Universe Pageant, but nothing came out of it. One might have the impression that Russia is indeed a cursed country for Donald Trump.

Read here more about the things that connect Donald Trump to Russia.