Street football: The purest sport that every Russian boy knows 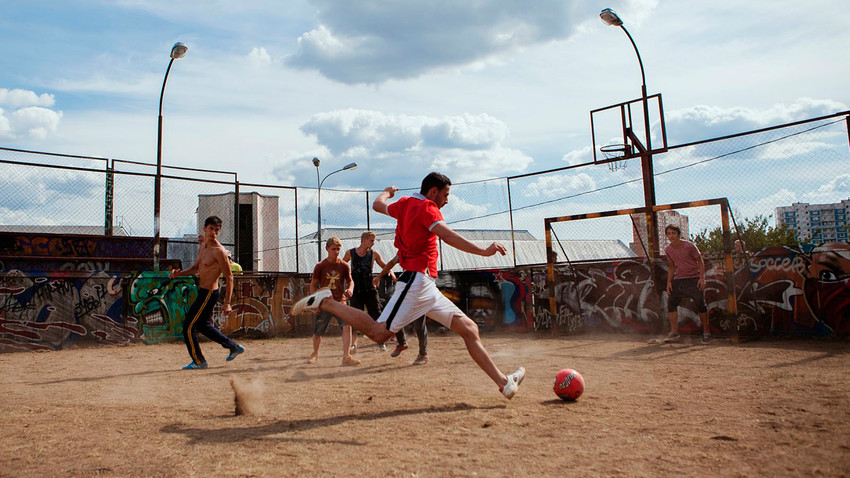 Kinopoisk
While Russia’s national football team hasn't achieved much internationally, the country remains obsessed with the sport. Boys, and even some girls, have been playing it since childhood, thanks to local fields called korobkas. What’s behind this courtyard charm?

Andrei enters the football pitch in the backyard of his residential building and feels the nostalgia. “I remember how we spent all our free time here after school, sometimes even skipping lessons.”

The field is called a korobka (carton box) because it is surrounded with tiny carton, wooden or plastic boards about 1.2 meter high, and sometimes covered by metal fencing. The korobka can be found in every courtyard in Russian cities. Fifteen years ago they were covered with asphalt, cobblestones lying about and the goals crooked or totally lacking. 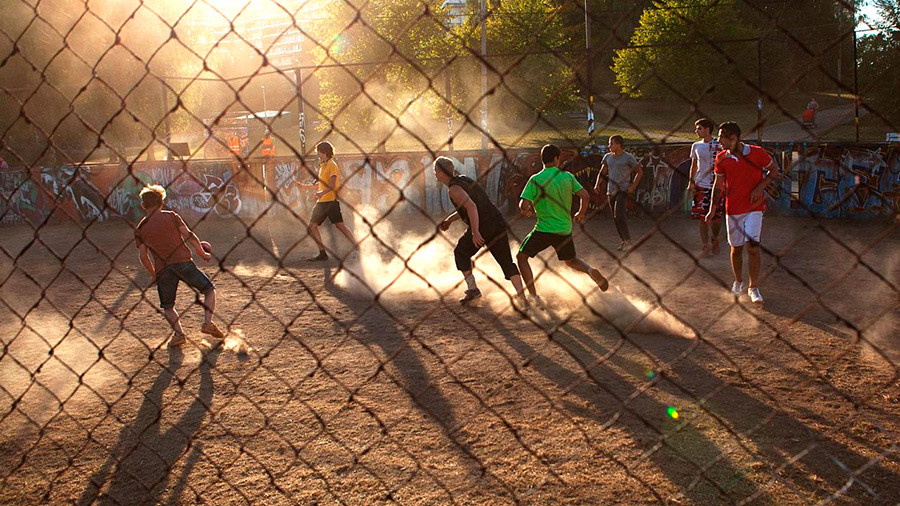 Andrei is a 32-year old football fan, and he watches every game shown on local TV, especially fond of the Spanish national championship, La Liga. As a lifetime supporter of the club, Spartak Moscow, he plays football every week with friends.

Andrei warmly remembers those times when he and his friends played with a cheap and shoddy ball  – “it was heavy, poorly stitched and held together with cheap glue.” To mark the teams you either had to take off your T-shirt, or put on the same color.

In the end, those who lost stood facing the goal and the winning team tried to hit them in the butt with the ball; humiliating, but motivating at the same time.

There are some versions of traditional football that boys play in Russian courtyards: The internationally recognized “four square;” a one-goal game “three bananas” (or “cross”) when only second-touch goals are accepted; and “goat” when everyone throws the ball at any building wall, and the one who doesn’t hit the target gets a letter ‘g’ and so on until he becomes the “goat.” 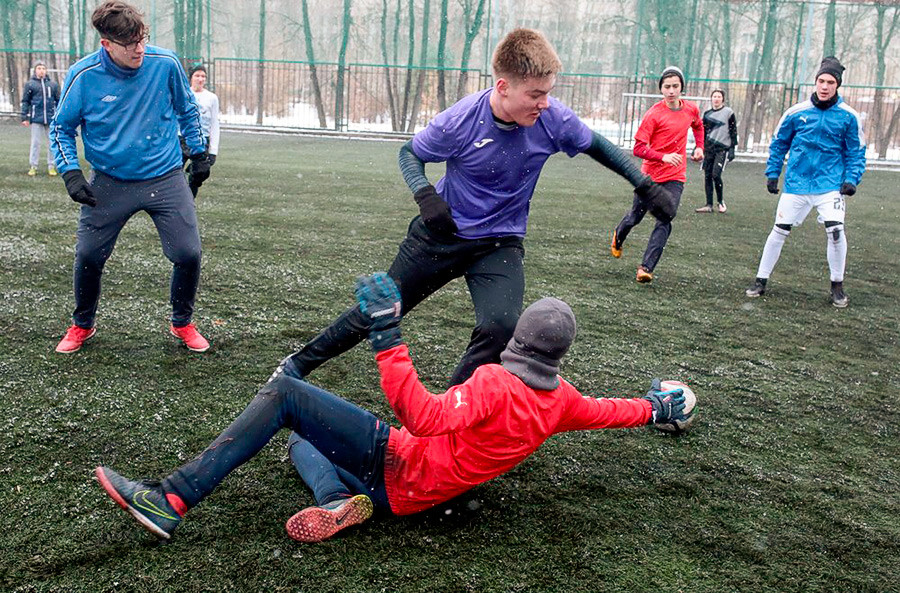 “Playing after it rained was additional fun. Everything was dirty – the ground, ball, walls and of course, yourself. Mothers usually were not happy when we hung around the korobka until late night. When we came home dirty – that was a performance!” remembers Andrei.

Andrei and his schoolmates have been playing football since their early school days. Today, even though they are office professionals, he and his friends still gather once a week to play, and in case of bad weather they switch to a FIFA video game. If the korobka is occupied you can always ask to join the game.

“Under Moscow Mayor [Sergei] Sobyanin all the korobki have been refurbished, covered with nice artificial grass or gravel, surrounded by a high fence, with lights and sometimes a changing area,” said Andrei, as he had a short pre-game stretch. “When I look out of my window into the courtyard, someone is always playing. It seems there are even more children and adults playing now.”

An executive at a large company, Anton, 34, rents commercial halls to play football with friends. He considers it a good substitute for the gym. “We have been renting halls or closed fields with locker rooms for about ten years, and there usually were no problems, one just dropped by. In the past two years, however, we must book the field in advance; there are too many people playing now.”

Moscow versus the regions

Anton and Andrei’s enthusiasm for the perceived popularity of football in Russia is not shared by Dmitry Yefremov, the head of the Moscow Street Football League. He says that in 2011 there were about 100 football clubs participating in the league, but each year sees their numbers diminish. In 2017, only 30 teams remained. 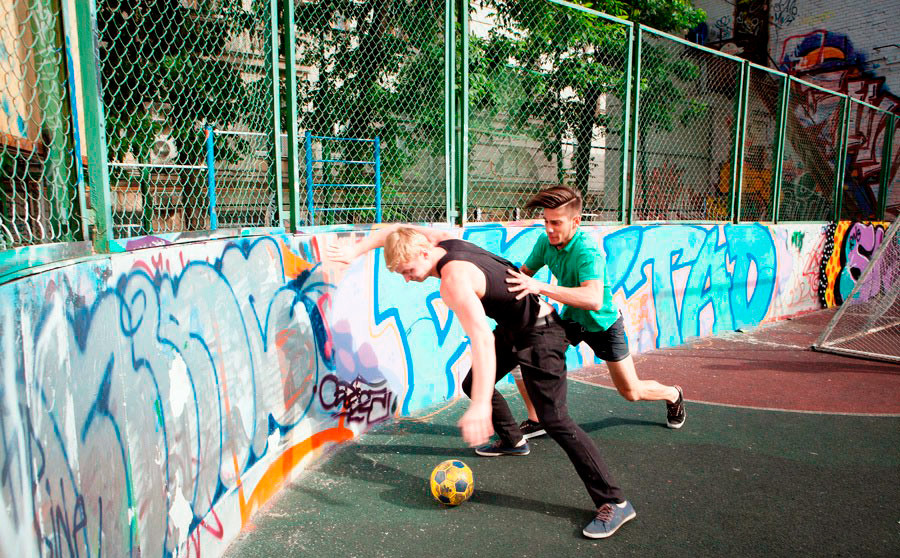 The reasons for such a downturn are many. According to Dmitry, kids previously didn’t have much choice after school but to go and play football. Today, however, there are many other activities and forms of entertainment, such as the Internet and computer games. Teenagers have more opportunities for self-development, as well as hobbies. And when a boy doesn’t start playing football in his early years, then it’s unlikely he’ll start in his 20s, added Dmitry.

“2008-2012 was a boom time for Moscow football, when fields with rubber and artificial lawn started to appear. In the USSR, however, football was undoubtedly far more popular than today, and I don’t think Russia will again become such a football-focused country as the USSR,” said Dmitry.

In some regions the situation is better because nice fields only began to appear recently. “Krasnodar, for example, currently has a football boom due to the local team’s fine performance in the national championship, as well as the development of football infrastructure thanks to private money,” said Dmitry. Local retail store tycoon, and owner of the Krasnodar team, Sergei Galitsky, recently finished building a new stadium in the city, as well as a beautiful park next to it. 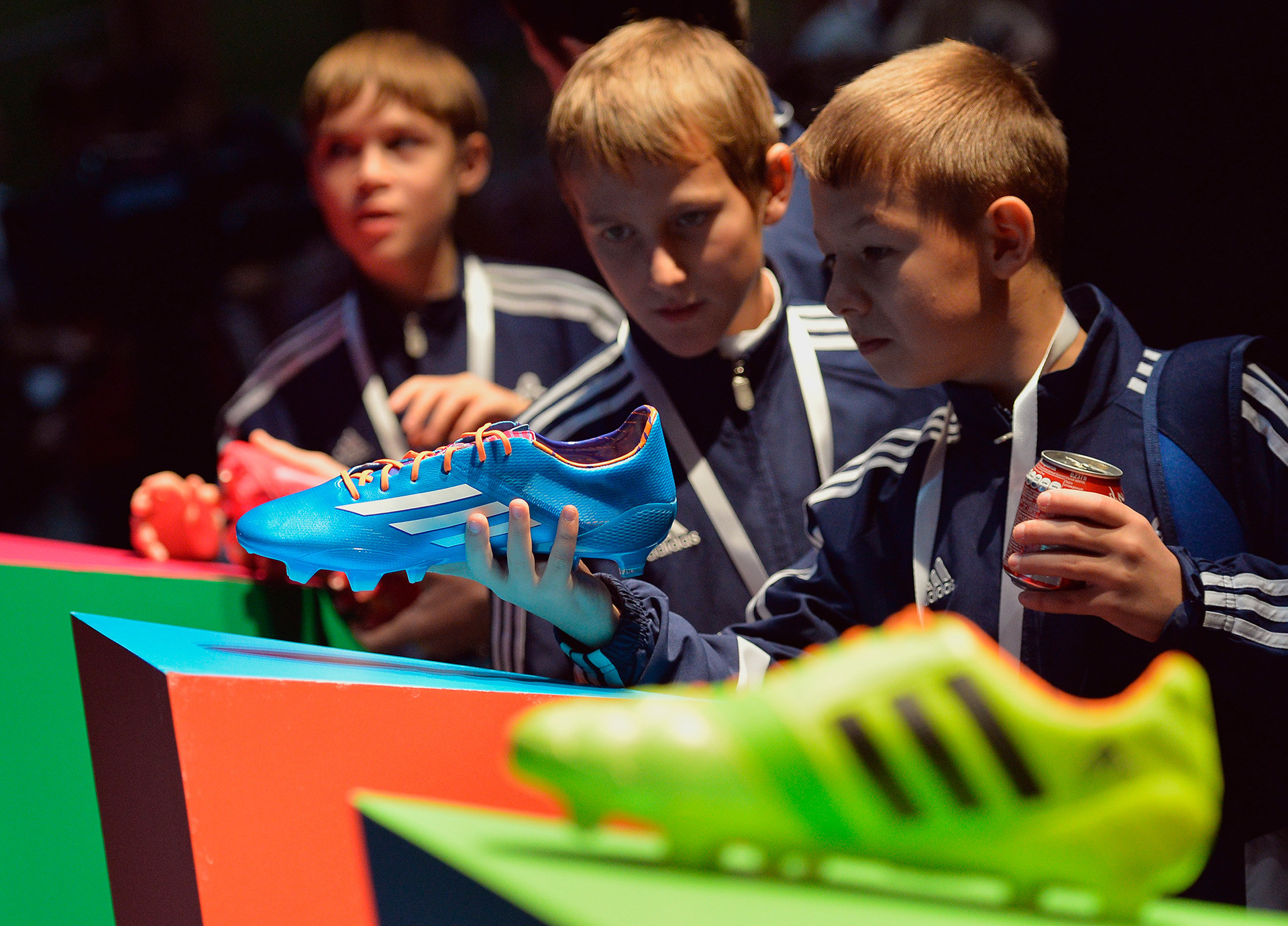 “In my childhood the strategy was that the ‘fattest boy plays goalkeeper,’ which meant that those who played bad, played defense. Today, if a boy plays bad he gets picked on and ridiculed. After such abuse he’ll likely give up football,” Dmitry said.

Also, Dmitry points out that the Instagram generation of boys who are age 17-23 (the average age of his league players) tends to think more about nice and stylish uniforms and expensive shoes, as well as photos and videos of them playing. Sometimes they don’t even play, and just warm up next to the field and then post selfies on social media.

Public attention is very important for these young football players, and when there are only 10-15 spectators on the korobka, then there is little motivation to score a spectacular goal and celebrate with fans.

Andrei’s favorite position is goalkeeping. While not very nimble he doesn’t mind this important responsibility. When someone from his team is tired, he takes his position. “The best thing is not to become a star and score goals, but to pass,” he says after scoring. Meanwhile, the boys who stand next to the korobka and wait for their turn to play, start to applaud.