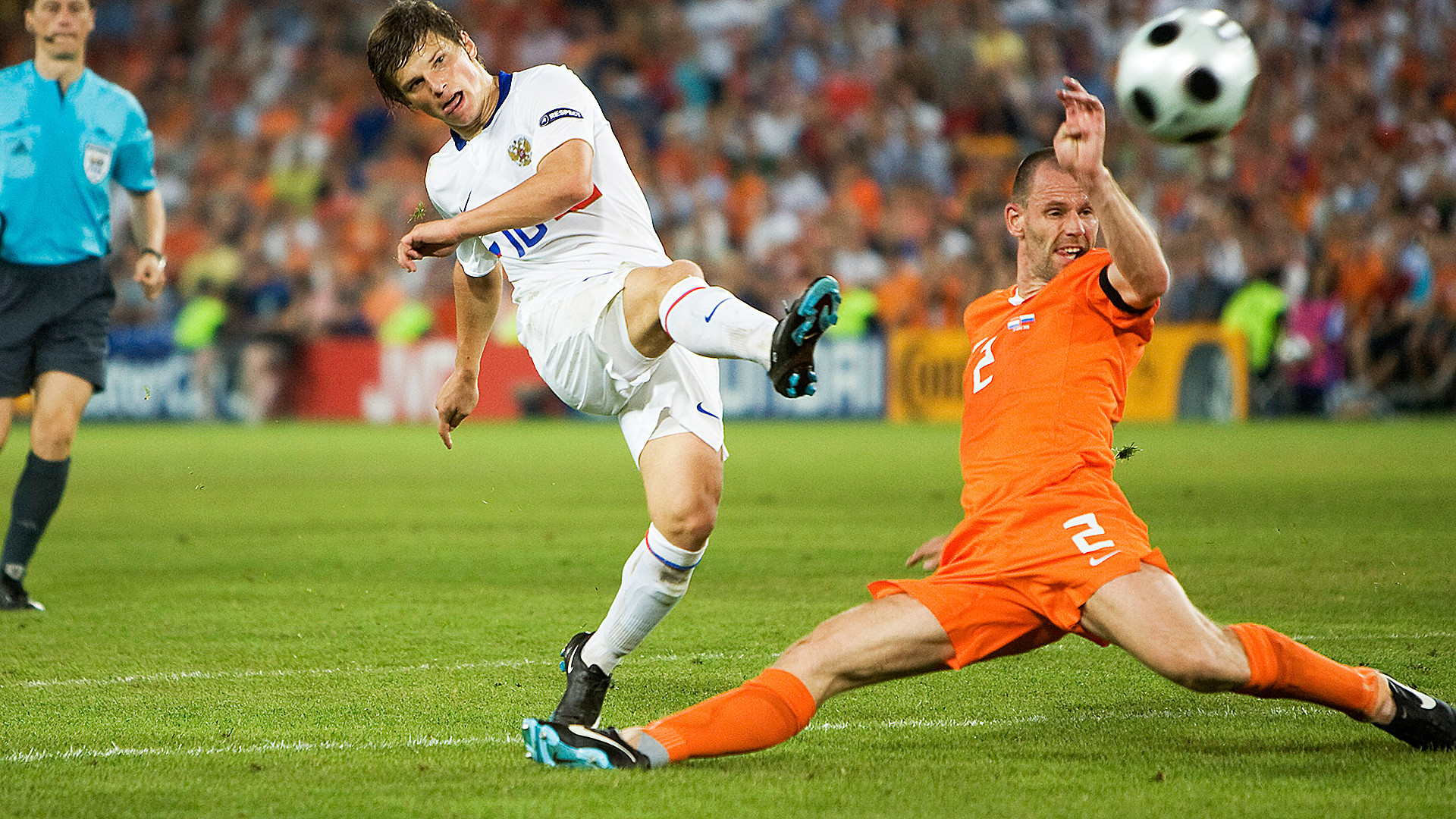 Leo Vogelzang/Global Look Press
Legendary goalkeepers, European trophies, losing 16-0... Russia has seen every high and low that there could possibly be in football. Sit back and watch these goal-fests to get you in the World Cup spirit.

It may be hard to believe, but the Soviet Union’s football team once ruled the roost. Although the Russian team is not a favorite for the 2018 World Cup, history suggests they will relish the big tournament. Check out these legendary goal-packed thrillers that we’ll hopefully get to see more of this summer.

Russia’s disastrous exit from their first official tournament appearance was a lesson learned the hard way, and it’s usually cited as the worst defeat in Russian football history.

Russia’s football participation in the 1912 Olympics was a sign of the sport’s growing popularity at home, with the first recorded match having been played in St. Petersburg just 15 years prior. However, German striker Gottfried Fuchs’s ten-goal spree quickly silenced any enthusiasm in Russia for the sport, and showed that they still had a long way to go.

Before the start of a 28-year hiatus from international football, the newly formed Soviet sbornaya kicked off in style. Keen to shake off the reputation of its Imperial predecessors’ questionable performances, the Soviet Union made football (the ultimate workers’ sport) a national pastime, and gave this match enormous press coverage.

Having assembled a Soviet team to face the mediocre talents of Turkey, more than 15,000 spectators in Moscow came to see its first match recognized by FIFA. The Soviets comfortably won thanks to a brace by striker Mihkail Butusov and a third by Aleksandr Shpakovskiy. The victory was portrayed in Soviet media as a moral triumph over capitalism.

Having resumed international football matches in 1952, it took the USSR only eight years to win its first major football trophy.

Led by the great goalkeeper Lev Yashin, the Soviet Union left it late to snatch a victory at the Parc des Princes, having suffered an early setback with Milan Galic’s 43rd minute finish for Yugoslavia. Georgian player Slava Metreveli soon equalized, and the turnaround was completed after 113 minutes when Viktor Ponedelnik’s looping header deep into extra time crowned the Soviets as champions of Europe.

The victory is considered Russian football’s proudest moment to this day, and remains the country’s most significant award in the sport.

By now a football powerhouse, the Soviet Union had its sights set on football’s biggest prize, which took place in England in 1966. It looked promising for a while, and the team took no prisoners en route to the final, winning all its group games and then easing past Hungary in the quarters.

The West German juggernaut led by Franz Beckenbauer proved to be the stumbling block, however. Despite one of football’s great saves by Yashin from a Beckenbauer thunderbolt, the Germans found themselves two up within 70 minutes. Valeriy Porkujan’s 88th minute goal was too little, too late for the Soviets, and West Germany progressed to one of the famous World Cup finals (which England won 4-2). The USSR’s fourth-place finish was the highest recorded in the country’s history.

The match that proved to be the Soviet Union’s final World Cup knockout match is a victim of history. Had this goal bonanza taken place in any other tournament that didn’t feature Diego Maradona’s escapades against England, it would have gone down as one of the World Cup’s greatest matches. Moreover, Igor Belanov’s 25-yard rocket might have been the goal of the tournament were it not for Maradona’s “Goal of the Century” in the next round. Even the commentator in this clip announces, “You’re not going to see a better goal in the tournament than that.”

This rollercoaster in the Mexican heat saw the Soviet Union twice give away the lead, with Belgium’s second goal controversially given despite the linesman having flagged striker Jan Ceulemans for offside. Belgium won after grabbing two goals in extra-time and hanging on after Belanov’s 111th minute penalty, making for a punishing end to the USSR’s dreams of World Cup glory.

Having beaten Netherlands in the group stages, it seemed that Valeriy Lobanovskiy’s men could repeat the glory of 1960 in dramatic fashion. Despite being favorites, the Soviet team succumbed to the electric Dutch front three of Marco van Basten, Frank Rijkaard and Ruud Gullit, and was well beaten on the day. There was also an element of bad luck – Gennady Litovchenko’s penalty was saved by Dutch keeper Hans van Breukelen, while van Basten happened to score with one of the greatest volleys of all time. Sometimes it’s just not your day.

The Soviet Union won its first football Olympic gold since 1956 with a muscular display that stunned a star-studded Brazilian team. Following a strong showing at the Euros, the team went on to record one of its great tournament victories that same summer. Having breezed past Italy and the alleged “group of death” which contained Argentina, the U.S. and hosts South Korea, the Soviet team was not the favorite against Brazil. However, despite an early Romario tap-in and a dazzling display from a young Serginho, the Soviets had an excellent defense, which paid off after Yuri Savitchev’s crafty lob in extra-time.

This was to be the team’s last trophy before its dissolution in 1992.

The Soviet Union’s last major match may have been an insignificant one, but at least they went out with a bang. Cameroon, managed by Russian Valery Nepomnyashchy, had already done enough to secure a knockout place before their final group match against the USSR, which had lost both of their games. Nepomnyashchy therefore fielded a (suspiciously) weakened side without star player, Roger Milla. Nevertheless, the Soviets finished bottom in their group, which was a fitting send-off to a dominant force in European football that within a few years would mostly be playing for the Russian Federation, Ukraine or Belarus.

Russia had a horrible time adjusting to post-Soviet football, without its wealth of Ukrainian and other CIS players to draw upon. This seemingly came to an end in 2008 when the Russian squad of mostly domestic-based players stunned the world to defeat a Dutch team that included Wesley Sneijder, Ruud van Nistelrooy, and Robin van Persie.

In spite of Van Nistelrooy’s late equalizer, Russia sealed a semi-final place through extra-time goals from Andrei Arshavin and Dmitri Torbinski. This unexpected result is seen as one of the great Russian victories, and made fans delirious with over half a million allegedly streaming out onto the streets of Moscow in celebration. The sbornaya went on to lose 3-0 to an amazing Spanish team, but it didn’t matter. They had made the nation proud of its footballers for the first time in many years. The victory also sealed big-money moves to England for Arshavin, Roman Pavlyuchenko, Yuri Zhirkov and Diniyar Bilyaletdinov. Happy days.

Euro 2016 was a tournament to forget for Russia. If player scandals and fan riots weren’t enough, they also failed to register a win, managing only a point against England. Wales, deemed a poor side but for star players Aaron Ramsey and Gareth Bale, ran riot against Leonid Slutsky’s men, with the manager subsequently calling his own team “shit.”

This was more than just a shocking performance on Russia’s part: It was a reality check. The team had come 180 degrees from what seemed like a bright horizon after Euro 2008, and it became clear that the forthcoming wave of promising young players, such as Adam Dzagoev, had failed to reach full potential. Moreover, with the World Cup headed Russia’s way in 2018, it gave them much to think about to avoid being embarrassed on home turf.

You can check out our more in-depth analysis of the challenges that the Russian team faces before the 2018 World Cup here.