Top 10 jokes about the Russian army 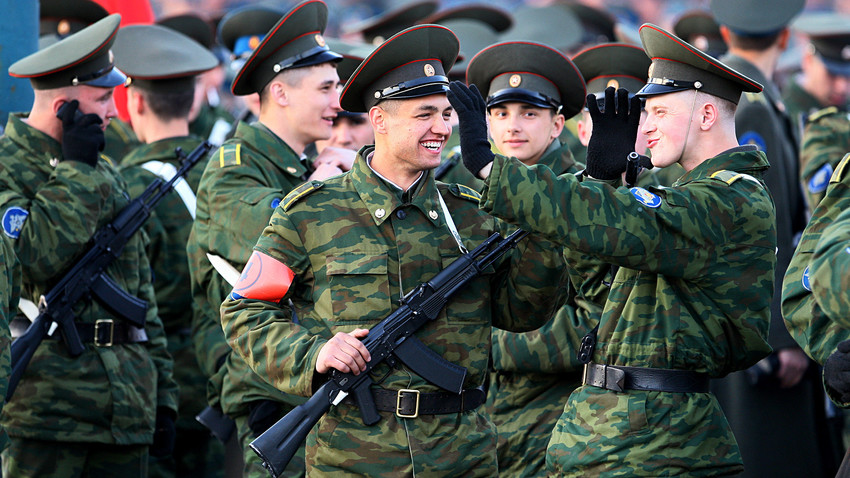 Alexey Kudenko/Sputnik
Who said the military can’t be funny?

1) An army major summons one of his soldiers:

“Private Petrov, do you believe in the afterlife?”

“Your granny’s waiting for you at the checkpoint, even though two weeks ago you went to her funeral.”

2) A guy catches a golden fish, which says to him:

“Let me go and I’ll fulfill your every wish!”

“I want to become a Hero of the Soviet Union!”

He blinks… and finds himself in a field holding two grenades, facing five tanks...

3) Sergeant, check the personal file of conscript Petrov again, will you. After every target practice, he wipes his fingerprints from the weapon.

4) I slept well before joining the because I knew they were guarding me. While serving, I slept badly because I myself was doing the guarding. After serving, I can’t sleep at all because I know what sort of “guarding” it is.

5) Vyacheslav had the most beautiful girlfriend in the district, so when he joined the army the whole neighborhood went to see him off.

6) A military doctor is asking a sergeant about the sanitary conditions in his unit.

“How do you prepare drinking water?”

“Well, first we filter it.”

“Well, just to be on the safe side, we drink beer instead.”

7) Russian secret agent Petrov, who speaks five languages flawlessly, instantly blew his cover abroad when someone trod on his toe in the subway...

“Sorry, this is a missile base. You got the wrong place.”

9) The old saying that there are no unattractive girls is best proved not after a bottle of vodka, but after a year in the barracks.

10) Two soldiers decide to play a trick on their warrant officer. They go up to him and ask:

“Comrade Warrant Officer, which is heavier: A kilogram of iron or a kilogram of cotton wool?”

“What a stupid question! A kilogram of iron, of course.”

“No sir, they’re exactly the same.”