Who knew? Russian villages are bursting with original art 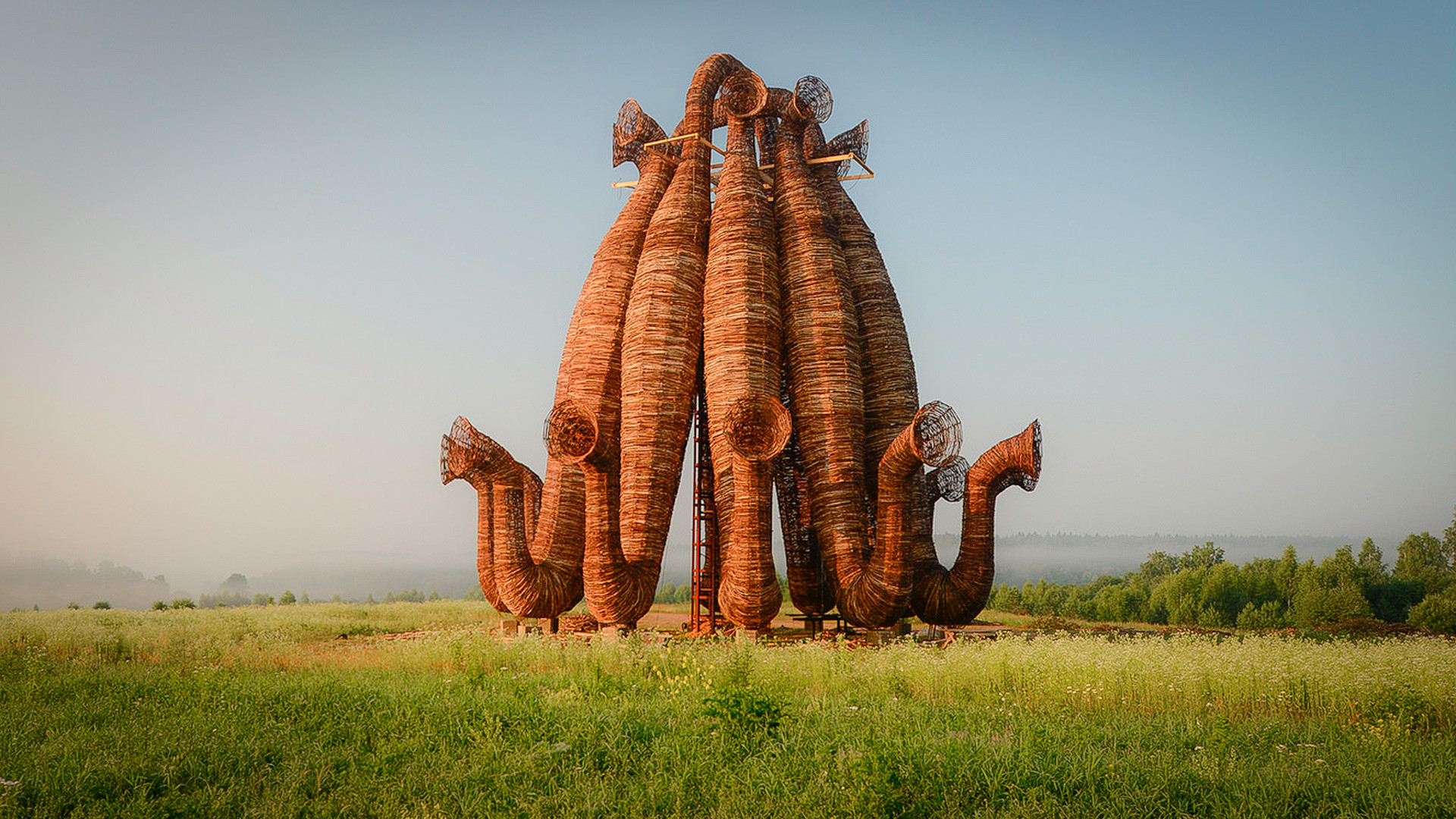 Nikolay Polissky
Russian villages may often be pigeon-holed as weird, remote places where people grow vegetables and drink kvass all day, but many are actually brimming with creativity.

What do you expect to see in the middle of endless wheat fields? Anything but this. 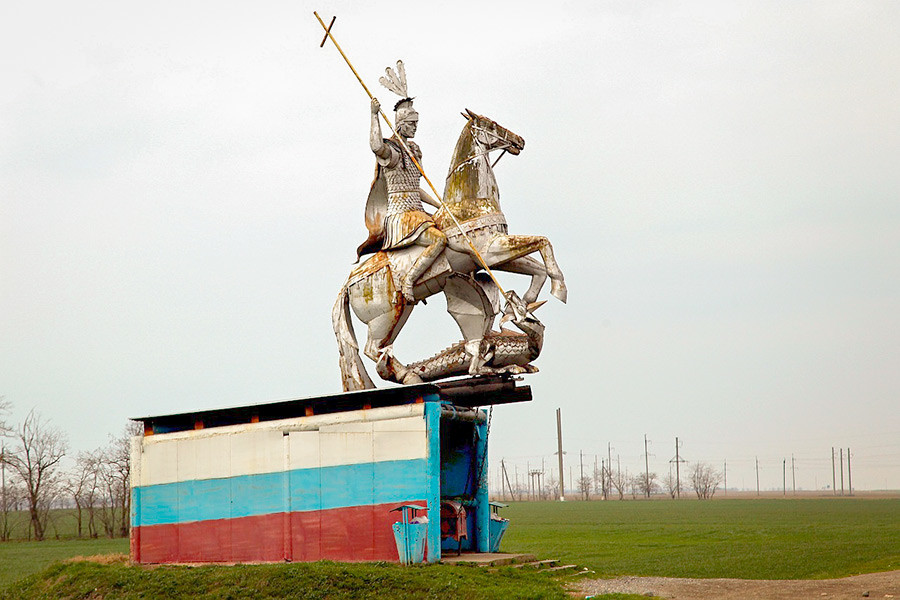 Bus station in the village of Rostovanovskoe

This is not Photoshopped. What you are looking at is a bus station in the village of Rostovanovskoe in the Stavropolsky region (1,660 km south of Moscow). The mighty St. George pierces a dragon with his spear. This canonical scene of the saint’s life can also be seen in Moscow’s coat of arms.

Making sculptures in the village workshop during the Soviet period posed a since the village was a huge prosperous kolkhoz (collective farm).

A “cultural revolution” took place in the village of Aleksandrovskoe (1,500 km south of Moscow) when local farmers saw a film on television about the extinction of Russian villages. One farmer was disturbed by the idea of living in a place condemned to be forgotten where nothing happens. Therefore he came up with a “viral” idea to make Egyptian pyramids out of hay and a life-size Egyptian sphinx. 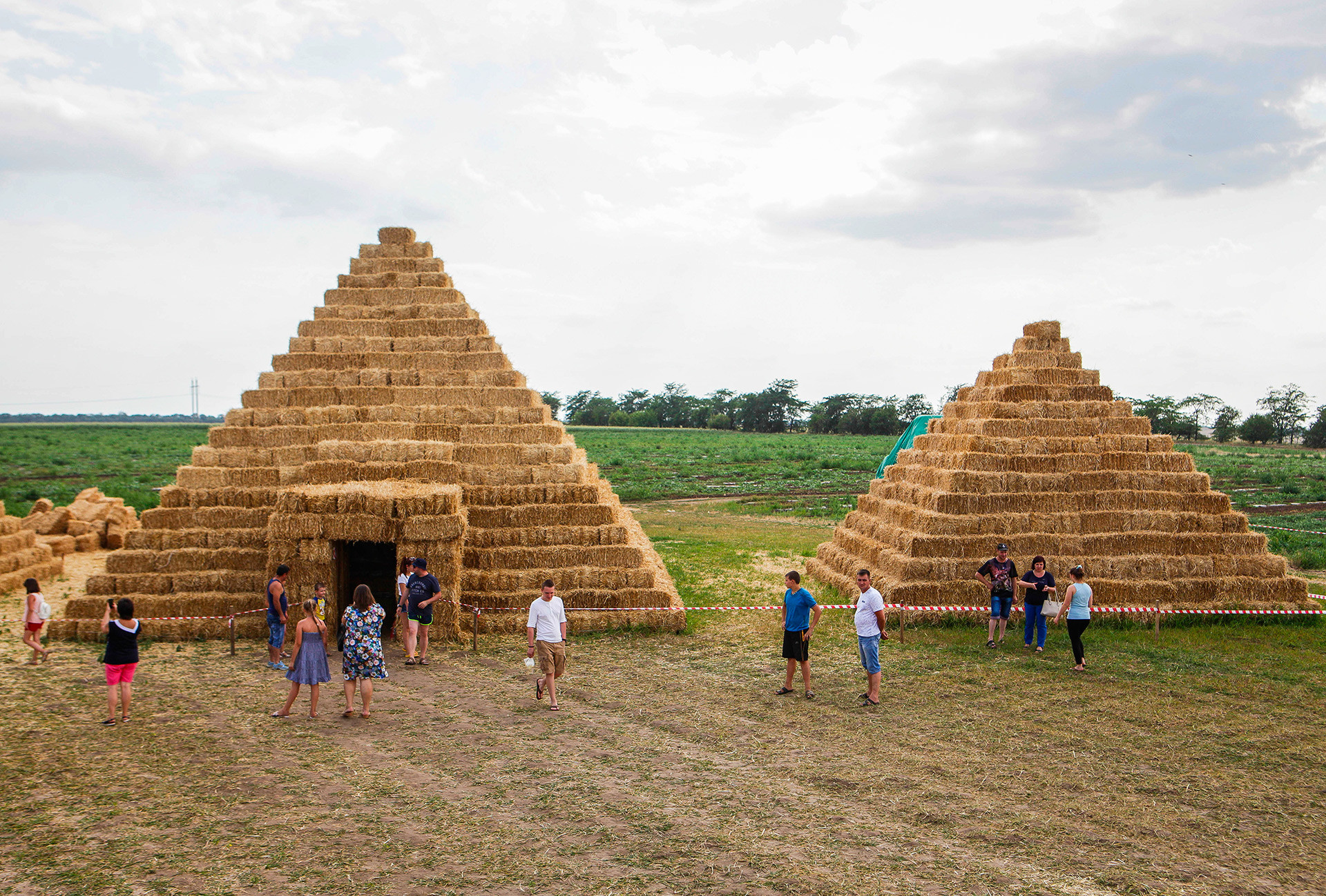 Egyptian pyramids out of hay

One of the artists, Aleksey Kharin, even changed his profession after creating the installations. This former college student decided to stop and transferred to the faculty of architecture.

The plan actually worked. Passing cars stopped by the straw pyramids, and nobody left without a watermelon. The square-shaped kind.

The rainbow of the Soviet automobile 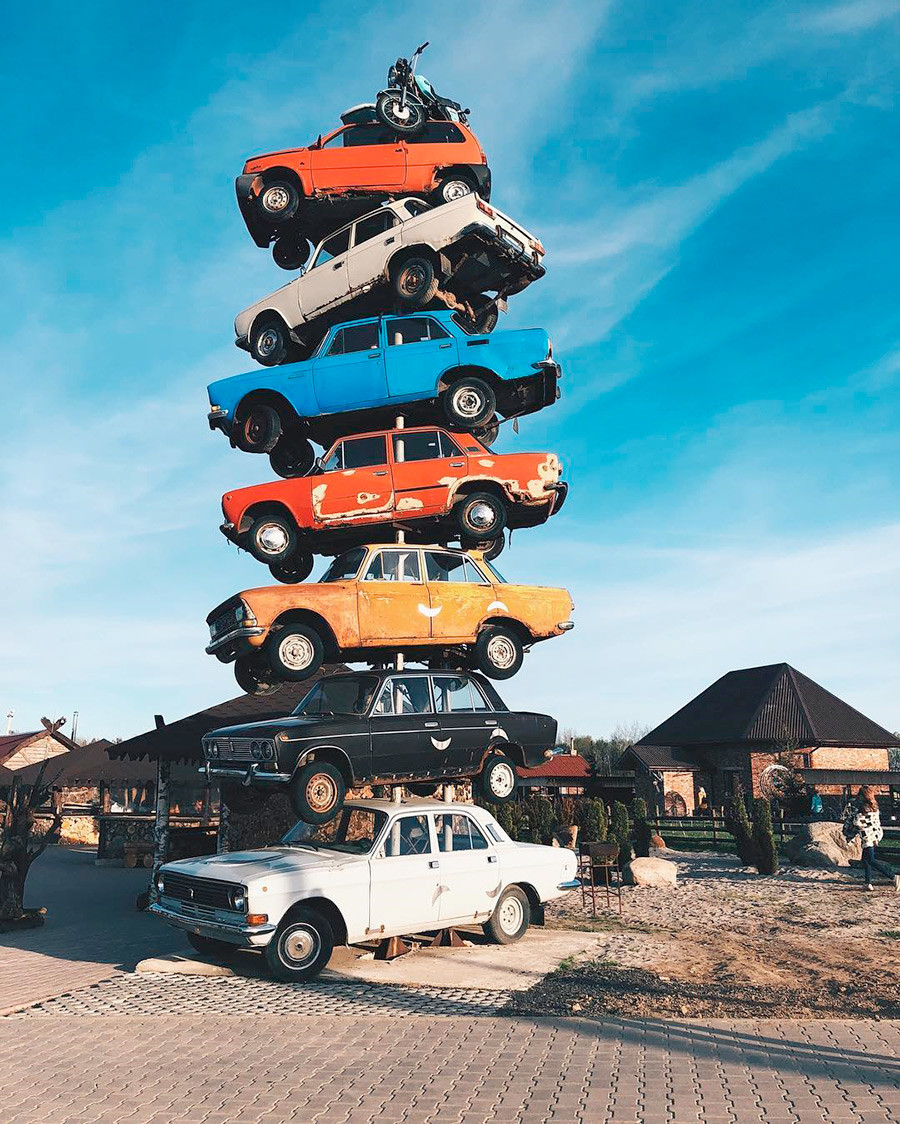 installation of old cars from the Soviet period rises up over the village of Konstantinovka (1,250km west of Moscow). In the every successful product of the Soviet car-manufacturing industry, from the “Zaporozhets” and “Moskvitch” to the “Volga” can be seen. 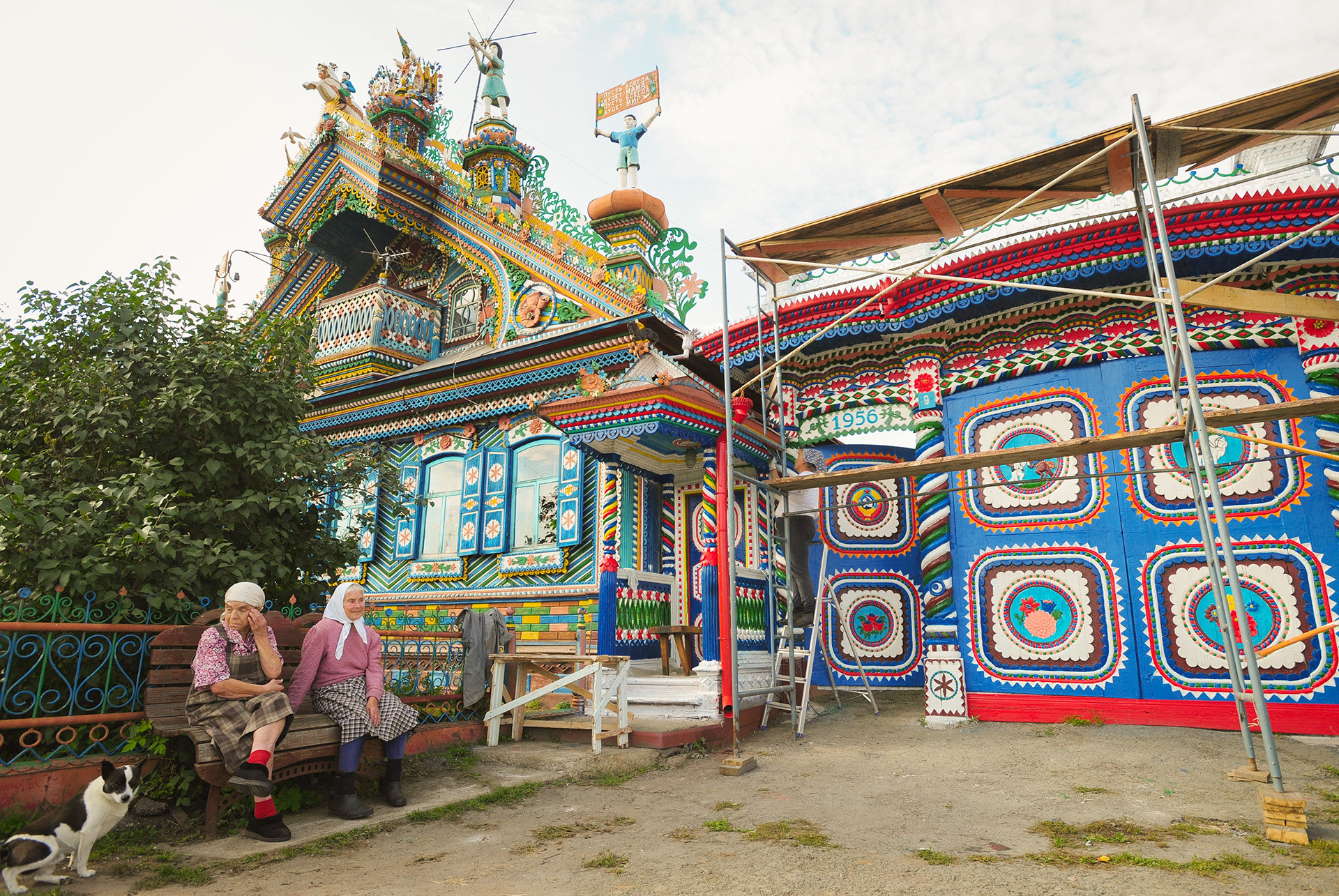 This could be considered a “ [separate living quarters occupied by elite women of Muscovite Russia] palace” right out of a Russian fairy-tale. But it’s actually one man’s life work. For fifty years Sergei Kirillov, a blacksmith from a small village called Kunara (1,860 km east of Moscow), has worked on turning his home into a model of folk architecture. It’s possible to find the crest of the USSR in a mural, a church dome, grooms with brides, children, knights, flowers and a line from a famous Russian song: “May there always be sunshine. May there always be blue skies. May there always be my mother. May there always be me.” 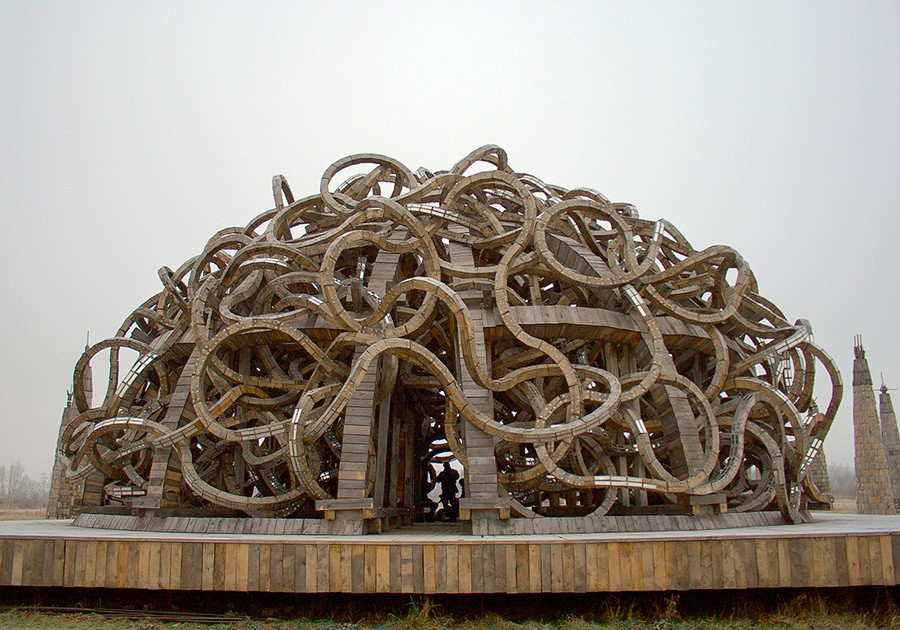 This small village is quite lucky. More than ten years ago the artist Nikolai Polisskii settled in Nikola-Lenivets (22 km south-west of Moscow) with his , which consisted of local residents. In this the renowned designer of land-art projects started to make large-scale sculptures out of broken trees and branches with his fellow artists. Following this, he set up the “Archstoyanie” festival which is now well-known all over the world. Every year they make several large installations in local fields and forests for the festival and over time the village has become Russia’s number one art park. There is also an artwork here called “Cosmic Mind” – a delicate wooden “hemisphere” consisting of missile towers. 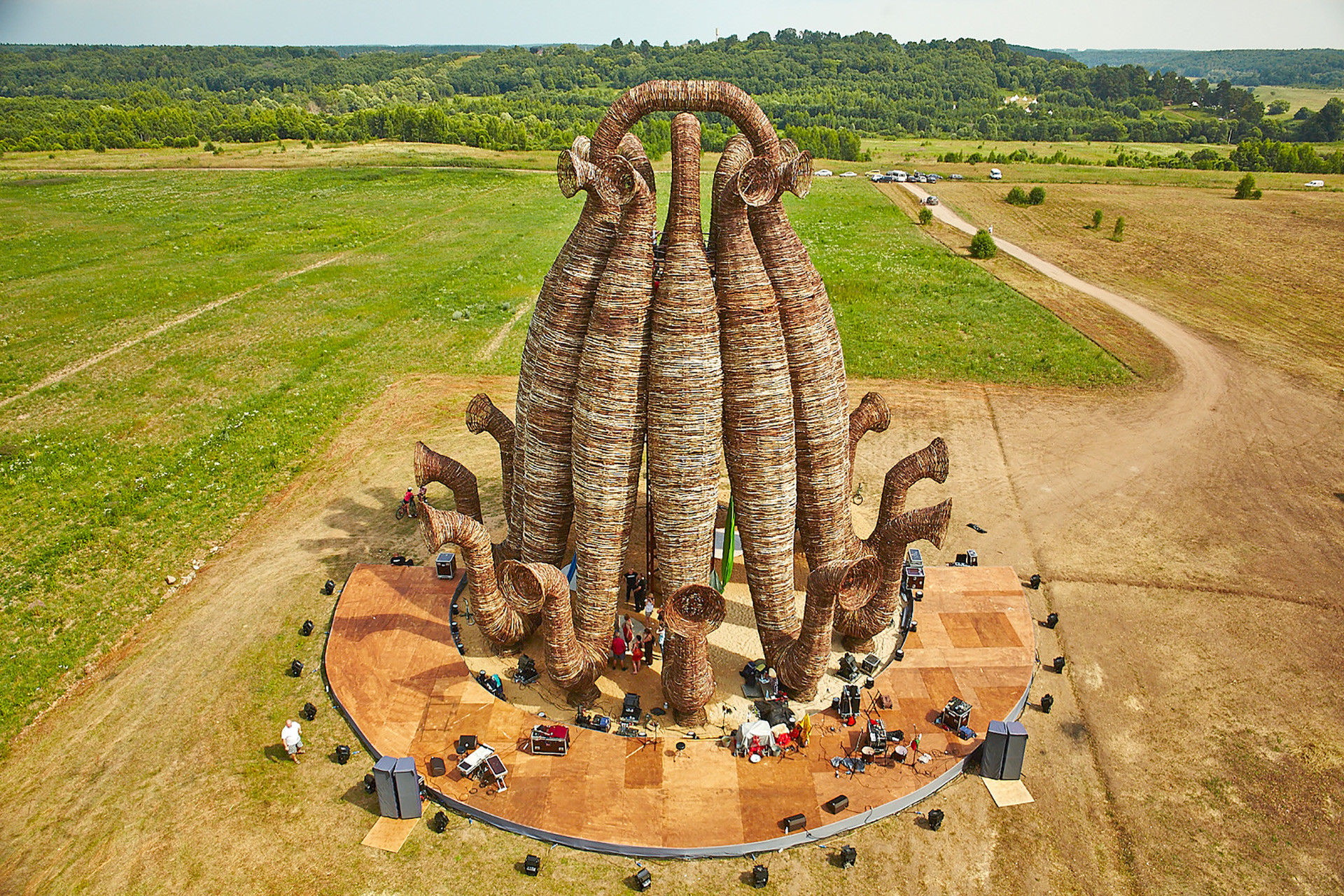 This 22-meter high installation is called “Bobur” and is made of large interwoven pipes, in an homage to the designer of the Centre Pompidou in Paris. 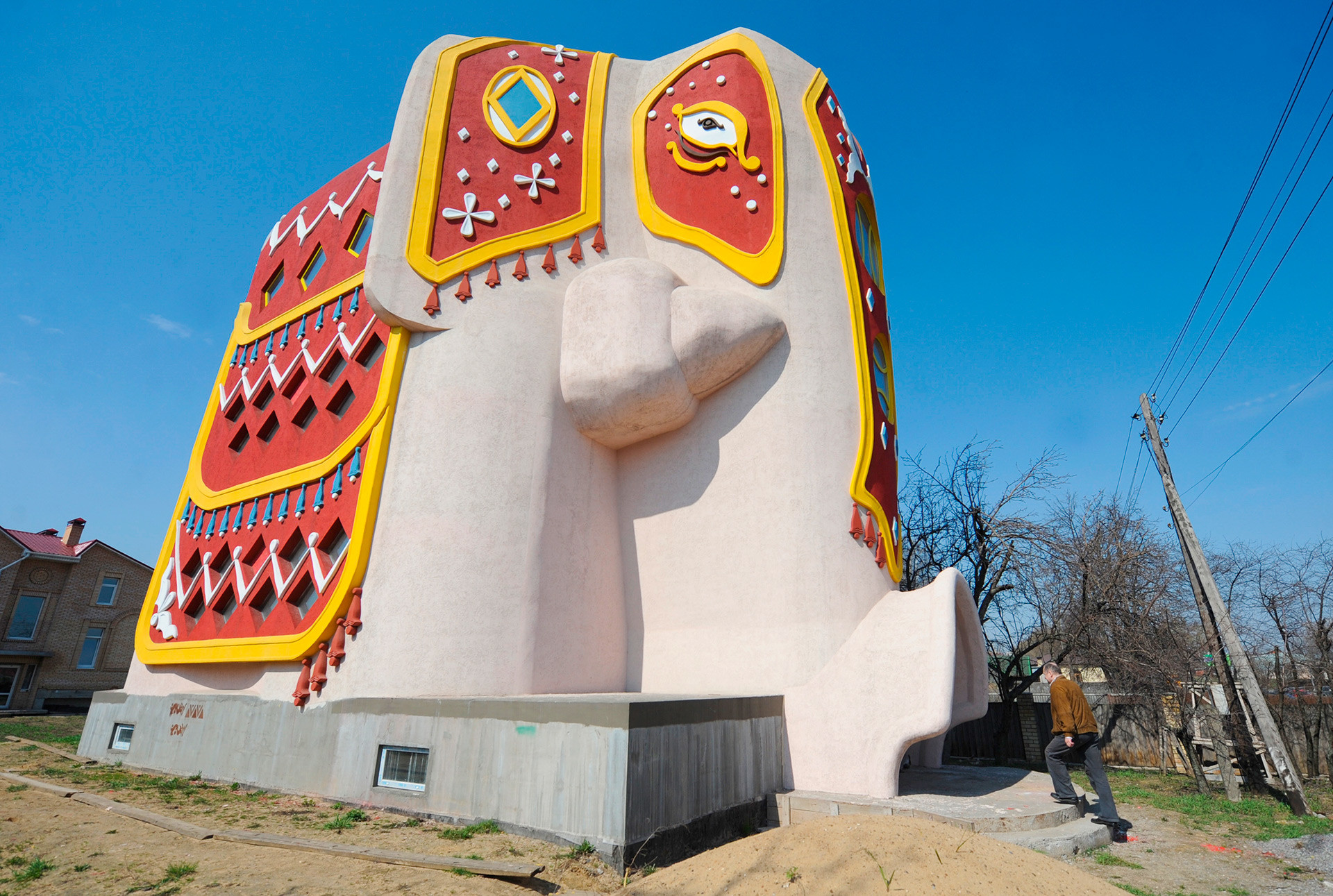 This house is in the shape of an Indian elephant in pursuit and is located 32 km from Moscow in the village Ostrovtsa. A local resident called Aleksey Sorokin, who has his own small construction company, created it. He intended the building to be an advertising project. There are no walls or partitions inside, and the floors merge with the winding staircase.