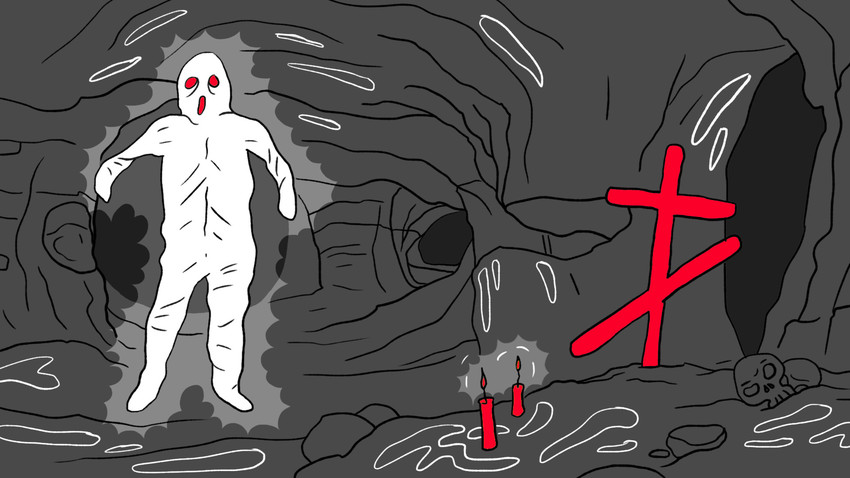 Natalya Nosova
For many years, these 14 caves on the outskirts of St. Petersburg have attracted all sorts of people: Soviet dissidents and local gangs used them as a hideout, geologists and diggers sought subterranean treasures, and extreme tourists came looking for adventure. The caves echo with rumors, one of which is that some who entered were never seen again. Fact or fiction?

About 40 km from St. Petersburg stands sleepy railway station, alongside a small settlement and the Tosna river. The place is steeped in history. Known today as Ulyanovka (formerly ), the settlement was home to Vladimir Lenin’s sister, who sheltered her brother from the tsarist police in 1905-1906. And it was here, at the home of Lenin’s sister, that Russian president-to-be Vladimir Putin was admitted to the Pioneer Organization (his family’s dacha was located in the same village). But perhaps even more famously, is the site of an underground labyrinth stretching dozens of kilometers, which can be entered through 14 caves by the banks of the river.

“,” “guillotine,” “fly swatter,” and “tram” are just some of the unofficial labels given by locals to the subterranean passages. It’s said that the “tram” passage is so called because it’s like being stuck inside a tram at rush hour. The caves are full of such “trams” and “meat grinders” of varying navigability and risk, and the landscape is constantly changing: every year some passageways get blocked off, while others open up 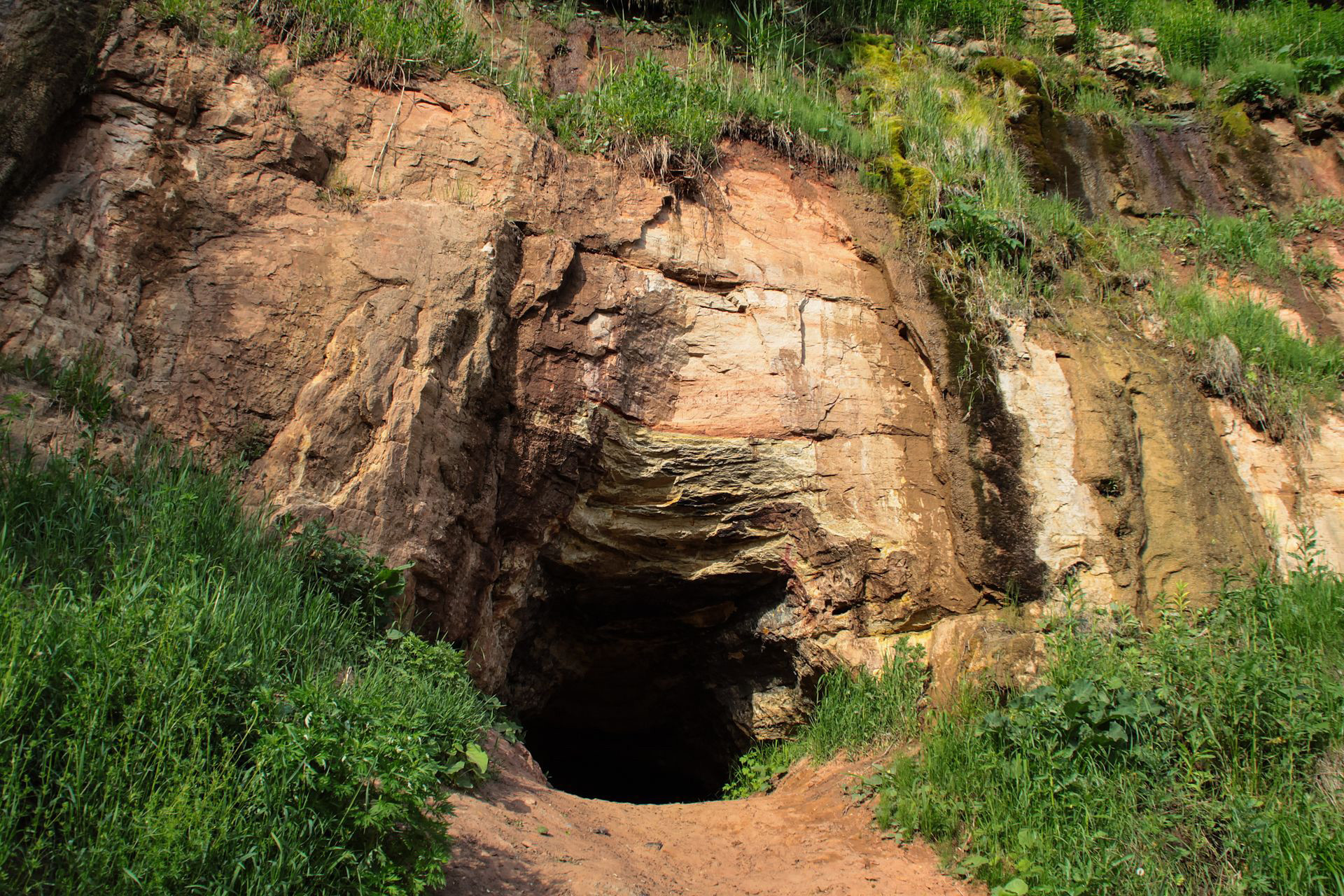 “Meat grinder,” “guillotine,” “fly swatter,” and “tram” are just some of the unofficial labels.

did the caves appear?

In the 18th century, on the banks of the Tosna, quartz sand was mined and floated on barges to St. Petersburg, where it was used at the Imperial Glassworks. It is believed that the caves formed as a result of extracting this sand.

By 1922, the construction boom in St. Petersburg was over, and the Tosna had shallowed to such an extent that transporting sand to the city was no longer profitable. Mining in was wound up, and the kilometers-long network of shafts and mines abandoned. Since then, they have acquired a life of their own. Over a period of decades, groundwater has eroded the sandy soil, radically altering the topography. 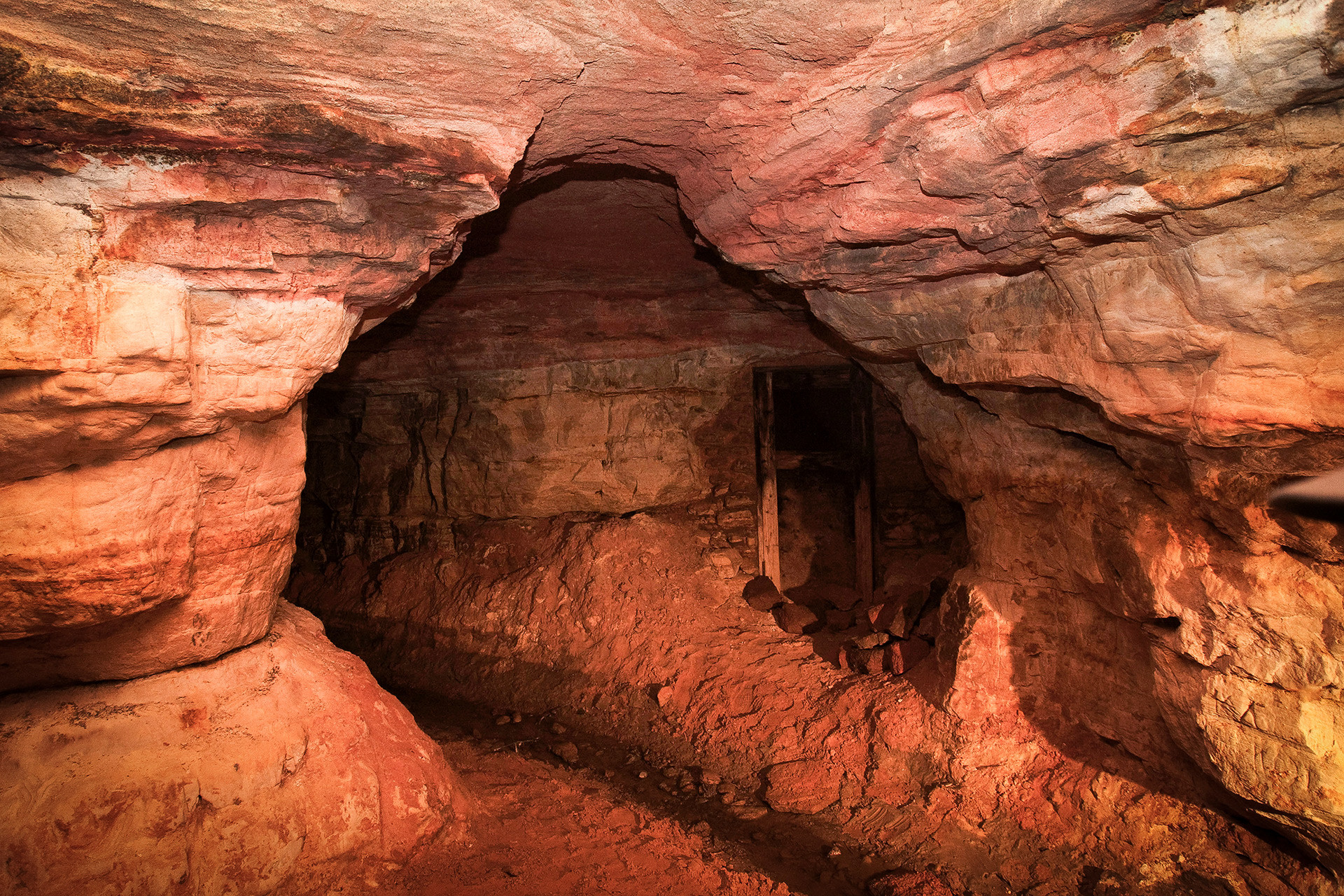 "Dozens of people lived there in the catacombs, read philosophical works, pondered the idea of a new revolution"

“Both my paternal and maternal lineage can be traced back to these parts. My grandma used to tell about how they hid in the caves during the first days of the German occupation [in WW2],” recalls a former resident of Ulyanovka.

Later, they were used as a hideout by escaped convicts, dissidents, gangs, groups, and just random people who found life underground a bit of a game. In the words of one anonymous “caver,” in 1982-1984 about 300 people lived there permanently.

“It was utterly incredible. Dozens of people lived there in the catacombs, read philosophical works, pondered the idea of a new revolution...,” says Alexei Gurevich, a member of one of the cave-dwelling groups known as Pilgrims 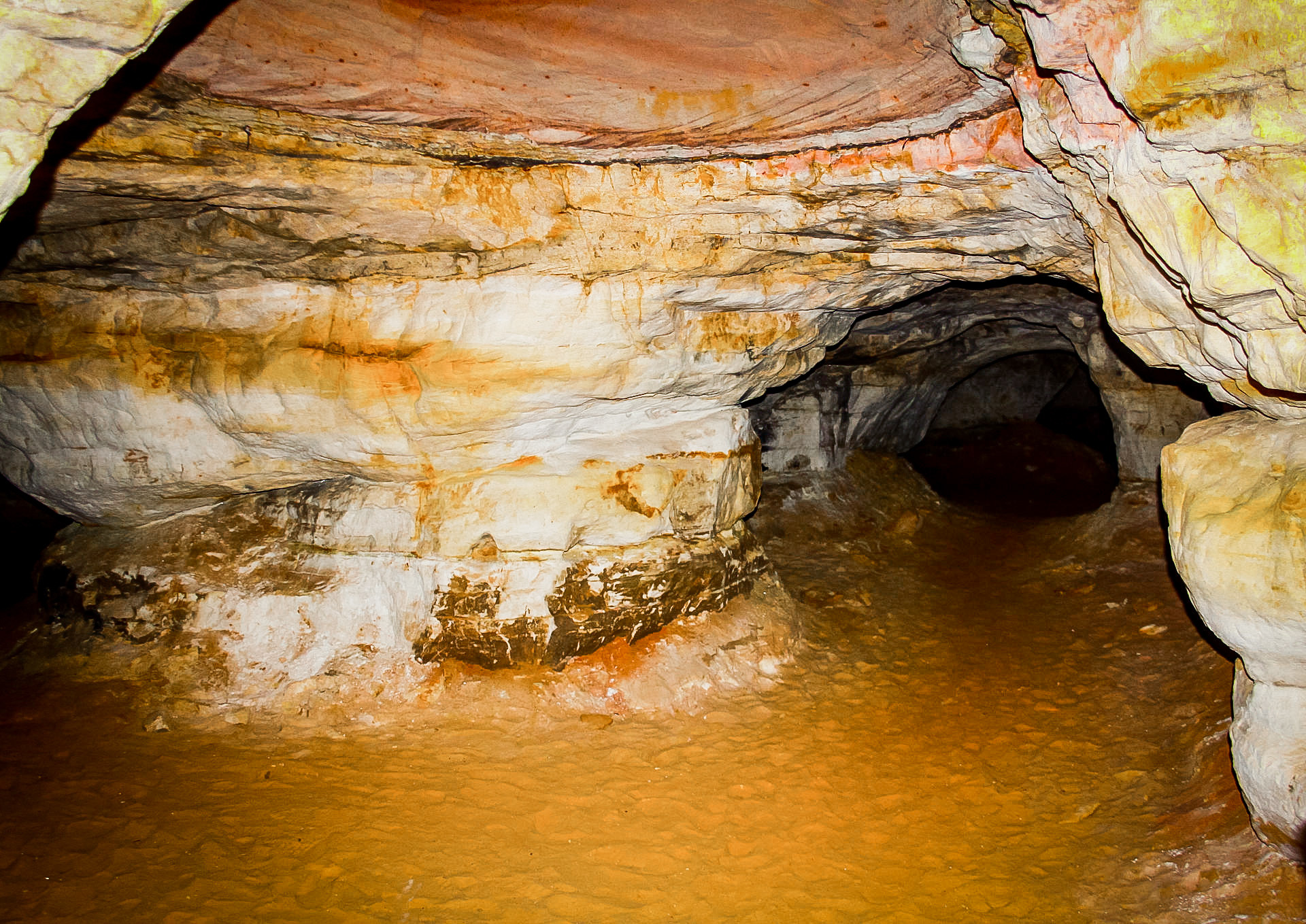 , not everyone took to underground. “The biggest sinkhole—which could have easily accommodated the entire State Kremlin Palace—we called the 'morgue,' because they used it to dump dead dogs, apparently to try and smoke us out.”

But that wasn’t the worst of it. “Sometimes people disappeared without . To begin with, it was all blamed on the police and the secret services, but it soon became clear that something else was at play. When one of the group leaders vanished, rumors spread about some evil force. What it was, I don’t know,” says Alexei.

Today, it’s possible to go on an official tour of the caves [site only in Russian and spend there New Year’s Eve or even Halloween or Friday the 13th (for those with strong nerves). The caves on the left bank of the Tosna are deemed safe, and an entrance ticket costs 550 rubles (around $8.70). The right-bank caves, however, are considered “wild” — frequent landslides mean no tours (although it’s not prohibited to go inside). Despite (or because of) the obvious danger, the right bank is more popular.

Oksana Chudnova, who visited the caves in 2007, has this to say: “In the Pearl cave, you can easily get lost. The most unpleasant thing is the ‘skin-scrapers’ — narrow shoulder-width passages no more than 50 cm high. But there are more cheerful places, too.” 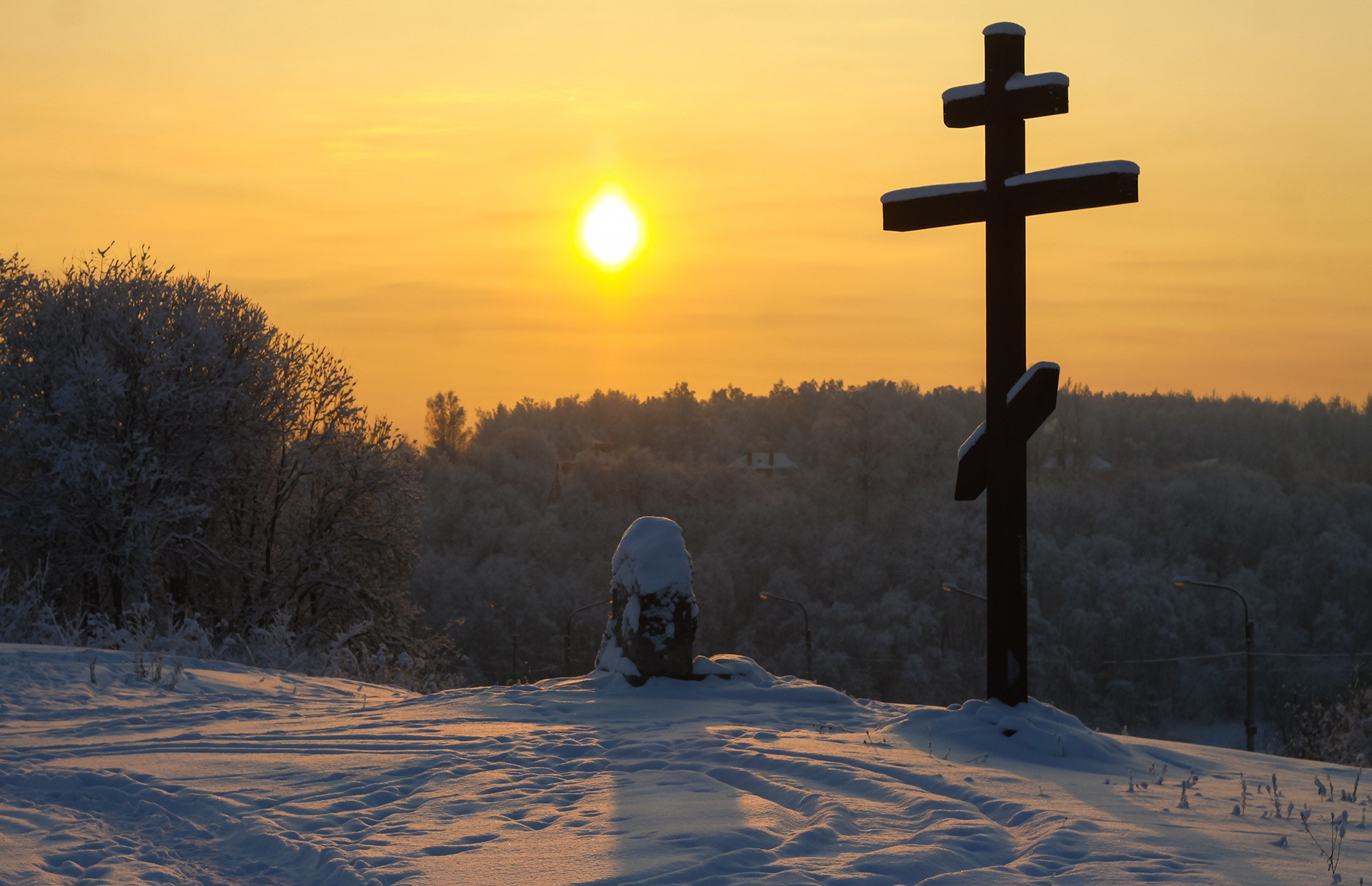 There stands a memorial cross to the geologists, geographers, and speleologists.

Speleologists, aka spelunkers, who explored the caves speak of underground “quicksand” and “sandy marshes.” The most obvious (but not heart-warming) explanation for the disappearances is that people simply get sucked down into the gooey mass.

The caves are also rumored to be much longer than commonly believed, possibly stretching to St. Petersburg or even as far as Lake Ladoga (more than 70 km). Such extensive passageways may have been dug for military purposes.

But some fans of the caves are convinced that they are, in fact, a space-time anomaly, like in the Netflix series Dark. “A strange thing happened once. I was talking with the curator of the local museum, and was just about to say goodbye when she fixed me with a steady gaze and said: “A few years ago, a person dressed like you came and asked the exact same questions.”

Above the caves, there stands a memorial cross to the geologists, geographers, and speleologists who perished, and below in one of the caves, there is a chapel able to squeeze in 60 people. It is the only underground chapel in Russia. There is, however, another memorial site popular with “” — an improvised grave in the murky underworld, where it’s customary to leave items that belonged to the dead or something to cheer them up in the afterlife (mostly cigarettes) 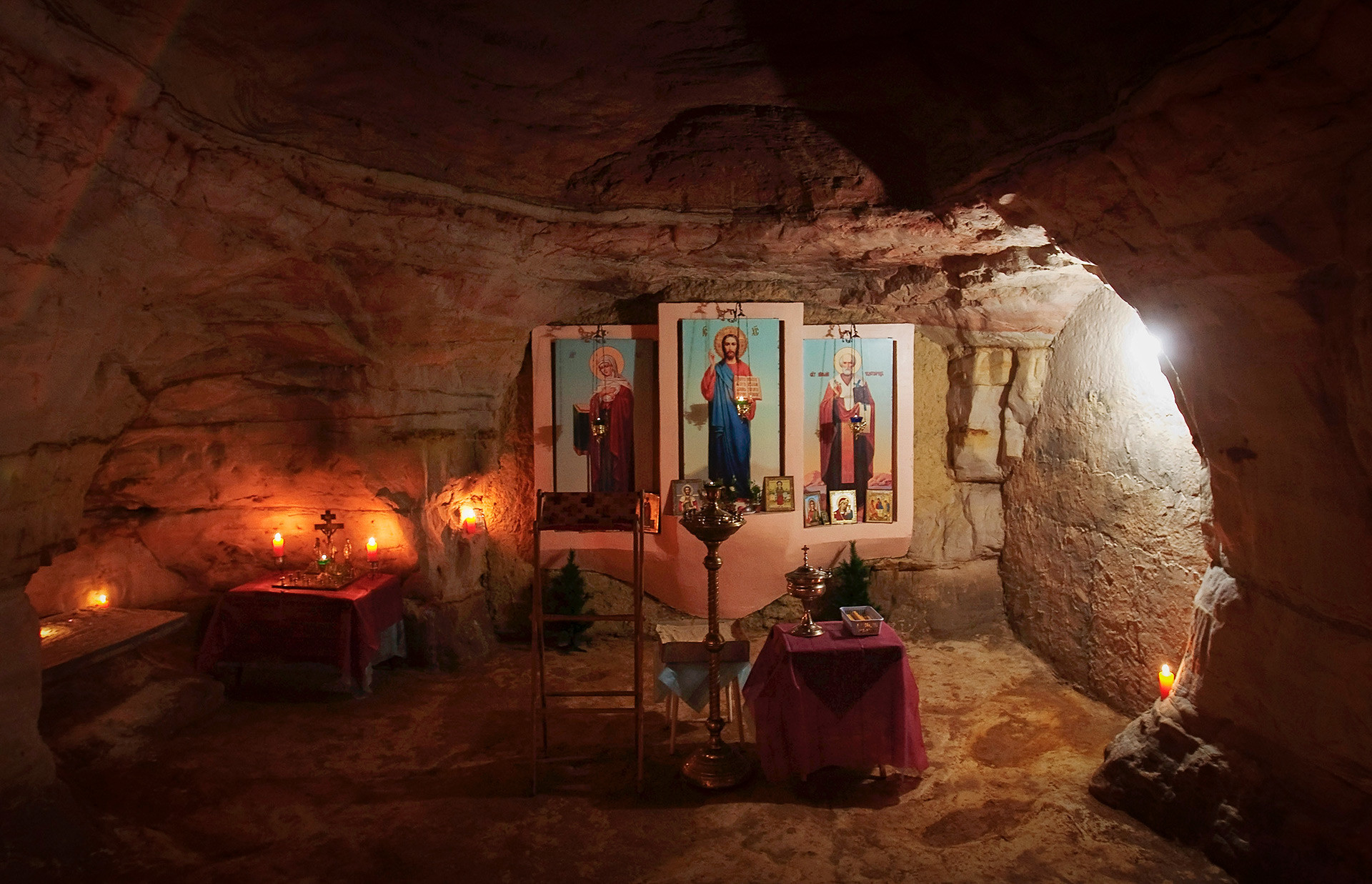 There is a chapel able to squeeze in 60 people.

article is part of the Russian X-Files series in which Russia Beyond explores Russia-related mysteries and paranormal phenomena.