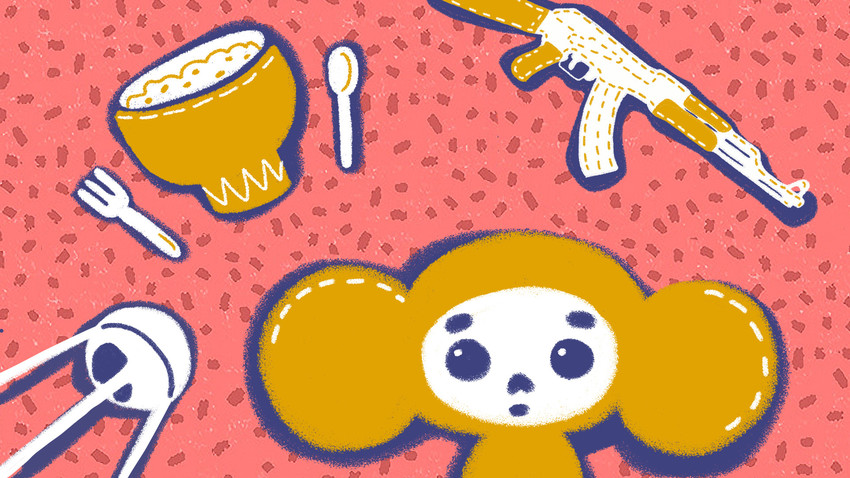 As a country that gave birth to both AK-47 and Cheburashka, Russia obviously has many faces.

Irina Baranova
There’s so much more to Russia than balalaika-playing bears knocking back vodka from samovars. Follow Russia Beyond’s list of the most Russian things – according to designers and journalists.

“If I had to choose one, and one only, symbol of Russia, I would probably go with the AK-47,” says designer Alexander Elzesser, the founder of the Heart of Moscow souvenir brand. “But to make me do it, you first have to put the thing against my head – otherwise, it’s impossible to pick just one!”

Elzesser is joking, but AK-47 remains one of the most recognizable Russian brands ever. The gun is used worldwide – for good and, unfortunately, for evil too.

Cheap (though not always cheerful) concrete-paneled buildings were built throughout the Soviet Union in the 1950s and 1960s, beginning during the time of Communist Party First Secretary Nikita Khrushchev (1953–1964). Not exactly palaces, , however, provided the Soviet people with the basic standard of housing.

Today may seem ugly and in poor condition – but they are still to be found everywhere in Russia. “I grew up in a small town near Moscow, in a ,” designer Vladimir Lifanov says. “Once I was on a working trip and had to cross the whole country. And in a remote town in the Far I saw the exact copy of the house I grew up in… that’s when I realized what is the real symbol of my country.”

Though nicknamed after a French chef who used to work in Russia, the Olivier salad put down deep roots in our country and almost every single family feasts on this dish on New Year’s Eve. “I think, this salad symbolizes Russia – it’s complicated, and it looks a little unpleasant at first (and not at all healthy with all that mayonnaise) but when you try it, you understand that you’ve fallen in love with it immediately. The same is true about Russia!” Vladimir Lifanov notes.

A unique creature designed by Eduard Uspensky (the children’s author who died Aug. 2018) and an icon for the generations of Soviet and Russian children. “This plushy, clumsy little animal of an unknown kind, with his big ears and kind eyes, symbolizes sincerity and honesty that can overcome any evil,” critic Konstantin Milchin wrote in magazine. Cheburashka’s popularity is truly timeless: first created in 1966, he was the Russian national team’s mascot in the Sochi Olympics of 2014 and is still big in Japan.

Actually, there are numerous types of this handmade clothing (from Orenburg, Moscow Region and so on). But take any of them – they are all based on traditional Russian craftsmanship that can be traced back to the ancient times. Contemporary designers, like Denis Simachev, exploit this tradition and have made them a part of the international fashion industry. “Models wear them on their necks or shoulders, some even use the shawl motifs to make bags,” fashion blogger Elena Larina writes.

Russian word for “satellite” made it into the English language – emphasizing what an enormous achievement the launching of the world’s first artificial satellite into orbit in 1957 was. “Though this caused panic in the West, as it was at the peak of the Cold War, the Sputnik brand was not only fearsome but touching as well,” Konstantin Milchin notes. “A metal ball with antennas like a tail, flying all alone in the eternal cold…”

Sputnik is deeply rooted in international culture: it gave the suffix to the American word beatnik, the generation of romantic roamers of the 1950s and Haruki Murakami’s entitled one of his novel’s Sputnik Sweetheart.

It seems that nothing can beat the sputnik in being so Russian and international at the same time.

“Valenki - Russian felt boots - are the best symbol of our country,” Vladimir Lifanov says. “Why? Because, as we all know, Russia is huge – almost impossible to embrace at once. But you put on your valenki and go, and they help you to see all of Russia.”

Romantic as this version is, it definitely makes sense. Perhaps valenki something you see walking through downtown Moscow (particularly in the summer) but if you live in a remote village with freezing winter outside – put on your valenki and for you, the cold will hold no fear.

Russia is different indeed - just have a look at this gallery of contrasts you can see in its capital, the beautiful Moscow.