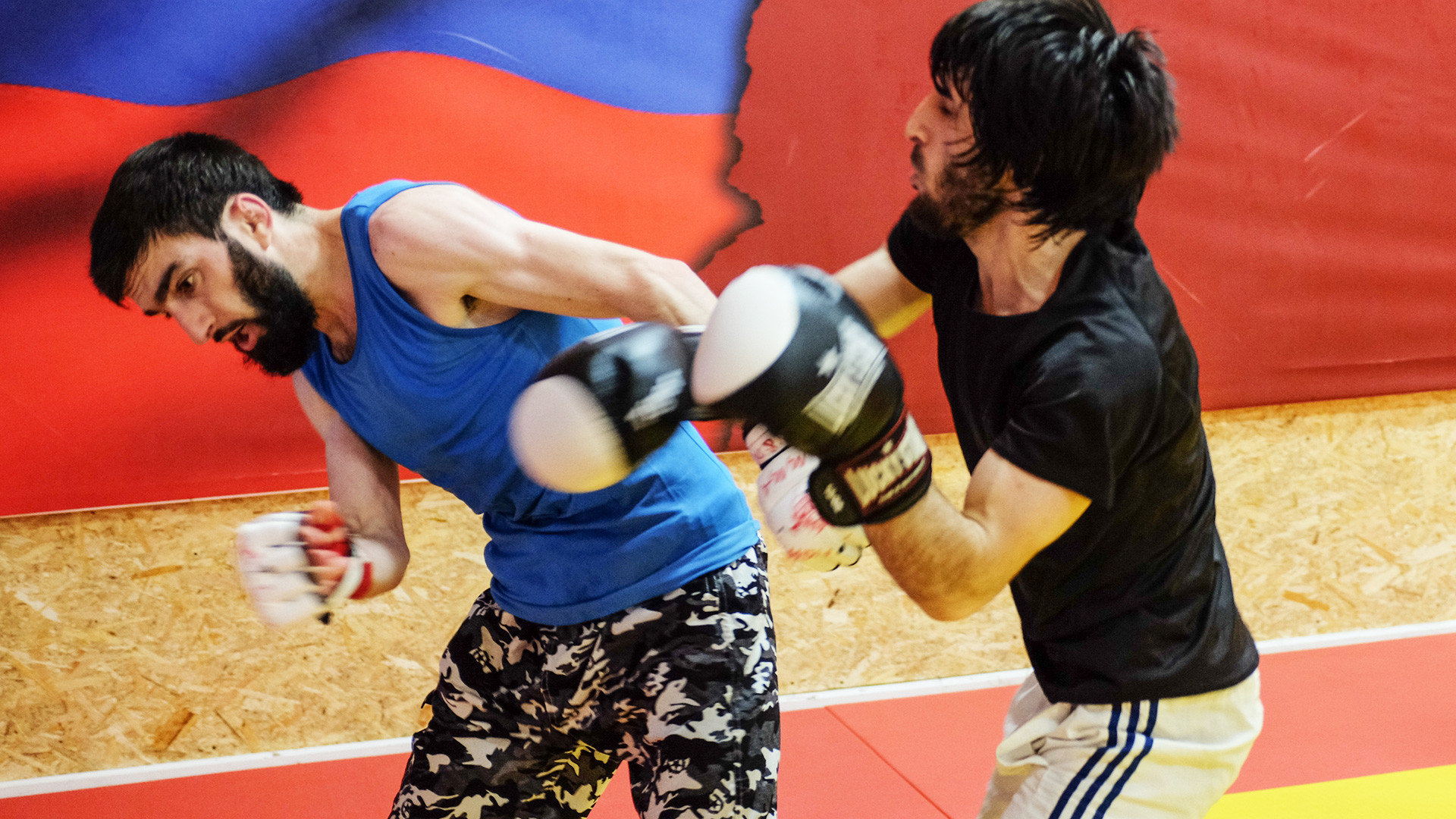 Ilyas Hajji
Sport is all that fighters from Dagestan know. Their families support them for years on end, hoping some day for a championship belt.

Before Khabib Nurmagomedov jumped out of the octagon and continued brawling in the spectator area, he forced Conor McGregor to submit to a brutal chokehold.

Back in Khabib's homeland of Dagestan (in southern Russia), this outcome surprised no one. A local saying here is, "Wrestling rules." Dagestanis, who live and breathe these words, start freestyle wrestling literally in infancy. Here, everyday training sessions are more like gladiatorial battles for survival.

The biggest disappointment in the professional career of Shamil Aliyev, 40, was his defeat at the 2004 Olympic Games in Athens. This young ambitious wrestler was destined for success, but fell at the crucial moment. 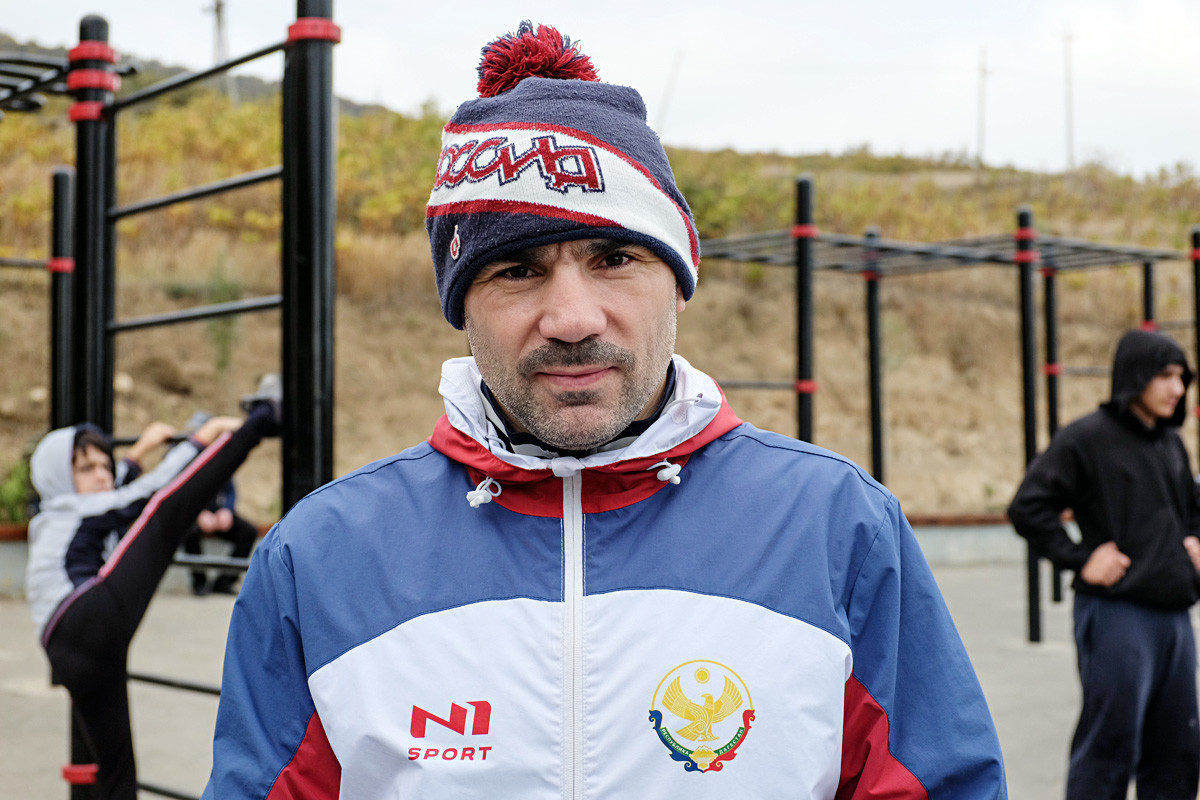 The biggest disappointment in the professional career of Shamil Aliyev, 40, was his defeat at the 2004 Olympic Games in Athens.

Today, 14 years later, Aliyev still dreams of Olympic gold, but for his students. He trains freestyle wrestlers at Dagestan's most prestigious center, the Hamid Hamidov Sports School. Here, kids, teenagers, and adults, all motivated by the prospect of Olympic victory, train several times a day with only a few short breaks for sleep. 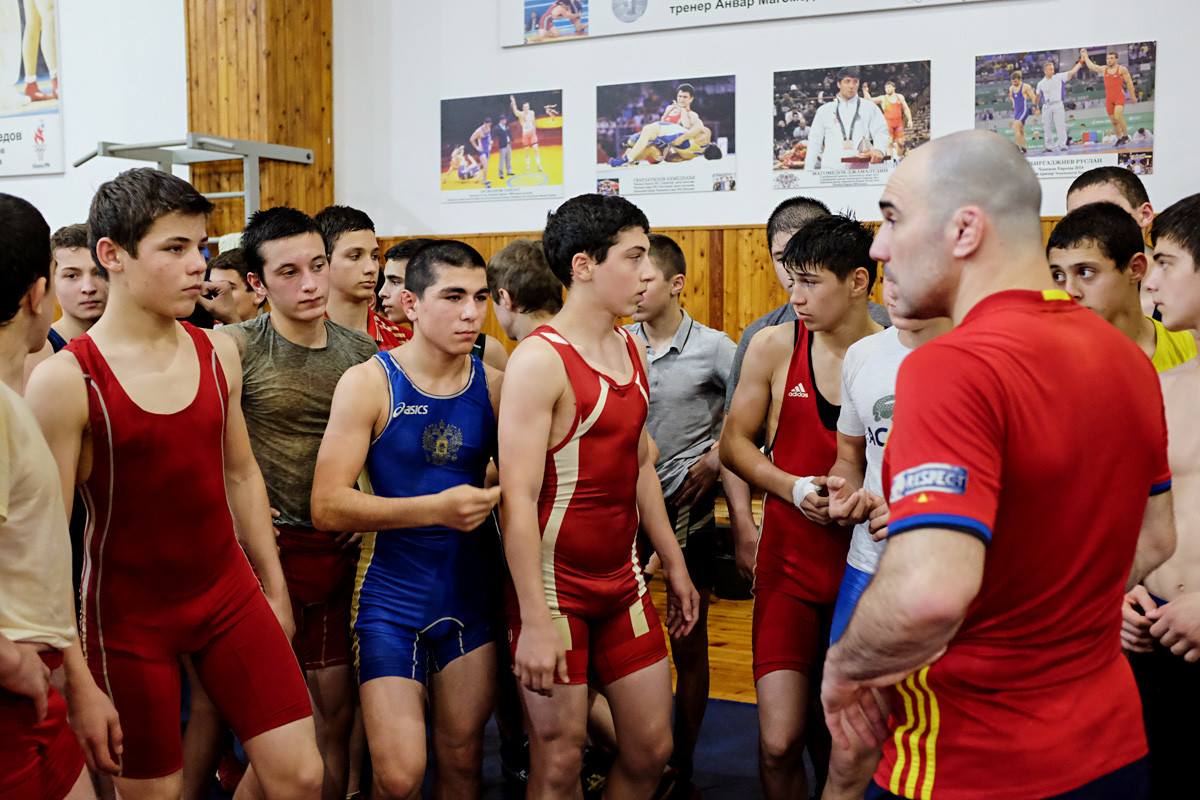 Aliyev still dreams of Olympic gold, but for his students.

The way of life, family ties, and even the economy of this southern Russian republic are largely geared toward producing future champions.

"In Dagestan, young fighters are helped by their relatives, brothers, and uncles to make sure that their chosen sport is top of mind at all times. That's the only way. In mixed martial arts (MMA), wrestling rules. That's what Khabib showed everyone," says Said Hamidov, 23, world junior wrestling champion and son of Hamid Hamidov, Finance Minister of the Republic of Dagestan, who died in a terrorist attack in August 1996. Now his son trains at the gym that bears his name. 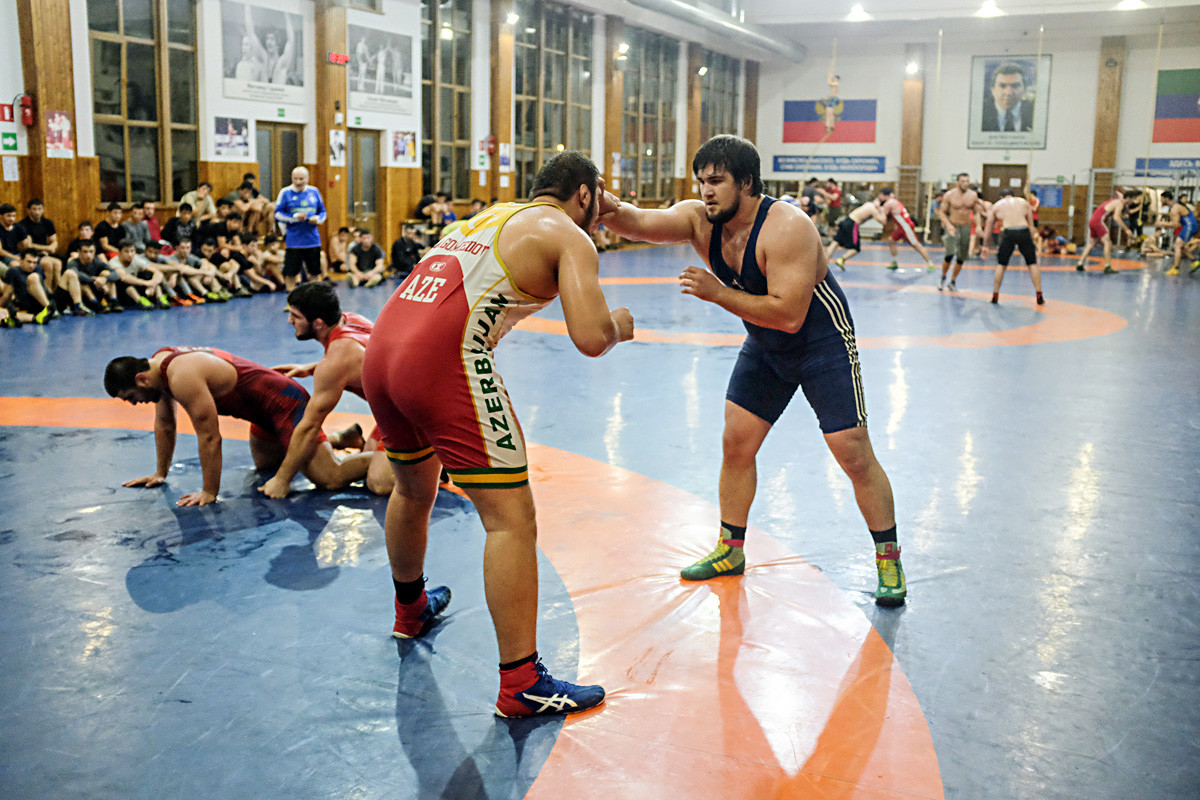 Said Hamidov (right) is a son of Hamid Hamidov, Finance Minister of the Republic of Dagestan, who died in a terrorist attack in August 1996. Now his son trains at the gym that bears his name.

Although non-professional sport brings almost no income, Dagestanis do not hesitate to invest large sums in developing young fighters. If someone in the family does wrestling, close and distant relatives are expected to fully support the young talent, even if their investments never pay off in a material sense.

"If you work at the same time, you won't achieve anything. Only total dedication delivers results," says Hamidov.

In this relatively poor republic, wrestling and MMA really do attract major investment, at both state and private levels. Whatever their family income, relatives of promising athletes provide support. Everyone does combat sports here, regardless of whether they drive an imported luxury car or can only afford a Lada. 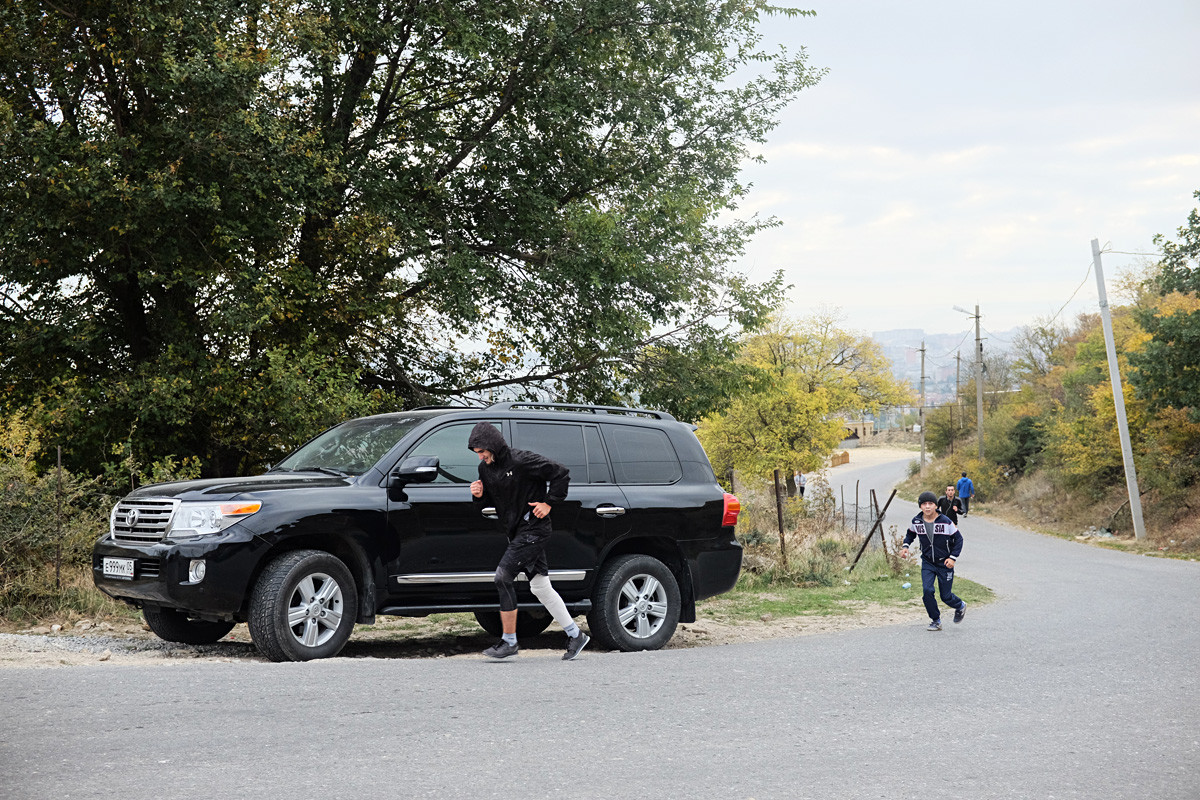 Everyone does combat sports here, regardless of whether they drive an imported luxury car or can only afford a Lada.

"I make this trip three times a week," says the driver of a LandCruiser 200, as he motors up a hill to take his son to Aliyev's training camp. 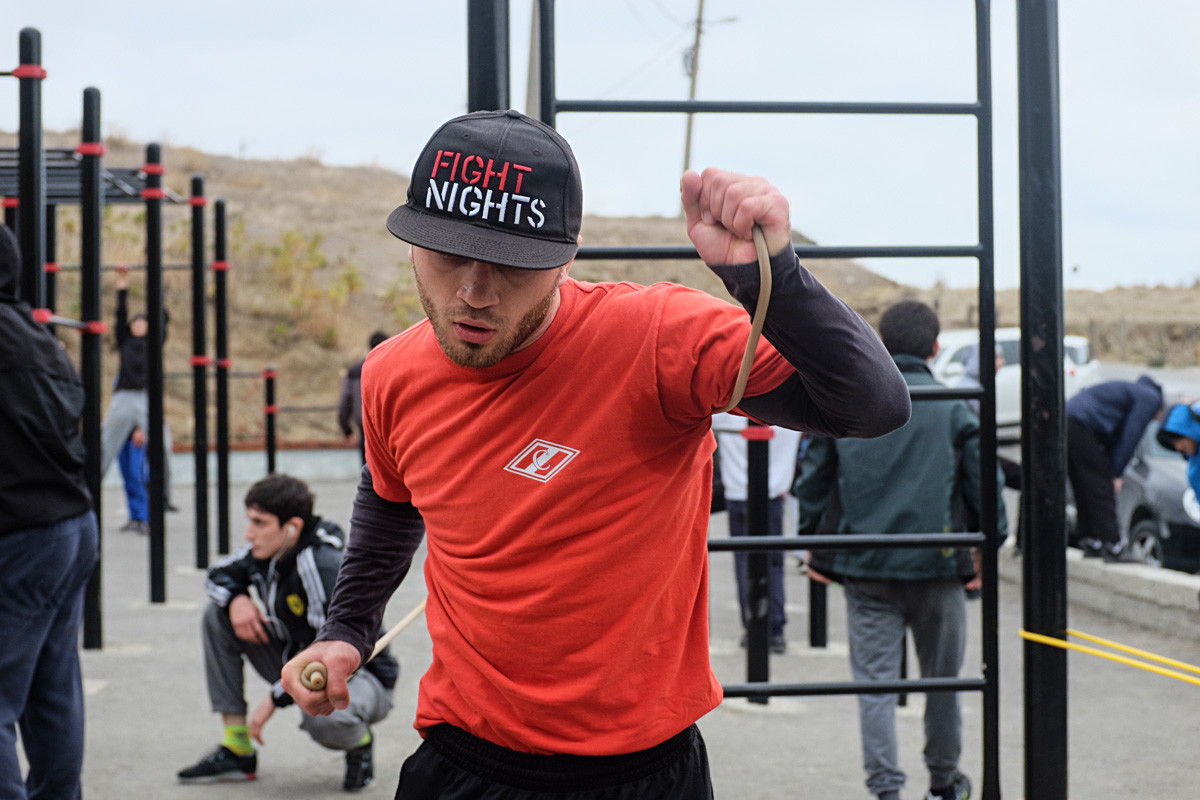 These long intensive sessions in the pristine mountain air start at 7am sharp on weekdays and weekends, so Dagestanis who do this sport seriously really do have no time for work or study. 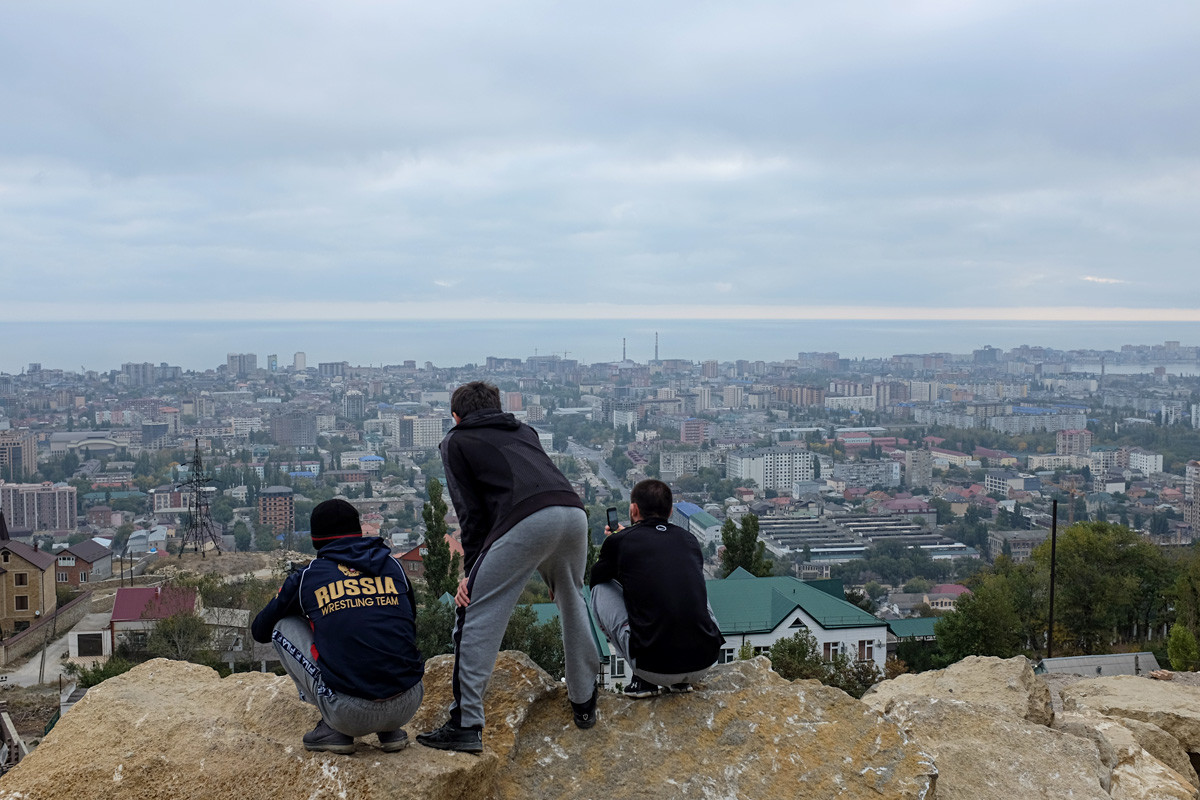 Dagestanis who do this sport seriously really do have no time for work or study.

But those with sufficient ability, plus money and support from relatives, can be invited to join the team that took McGregor's nemesis Khabib Nurmagomedov to UFC glory.

One of the two camps where UFC champion Khabib Nurmagomedov trains is located on the outskirts of Makhachkala, the capital of Dagestan. Here, adult fighters at the Eagles MMA club train young fighters who will soon be ready to replace them. 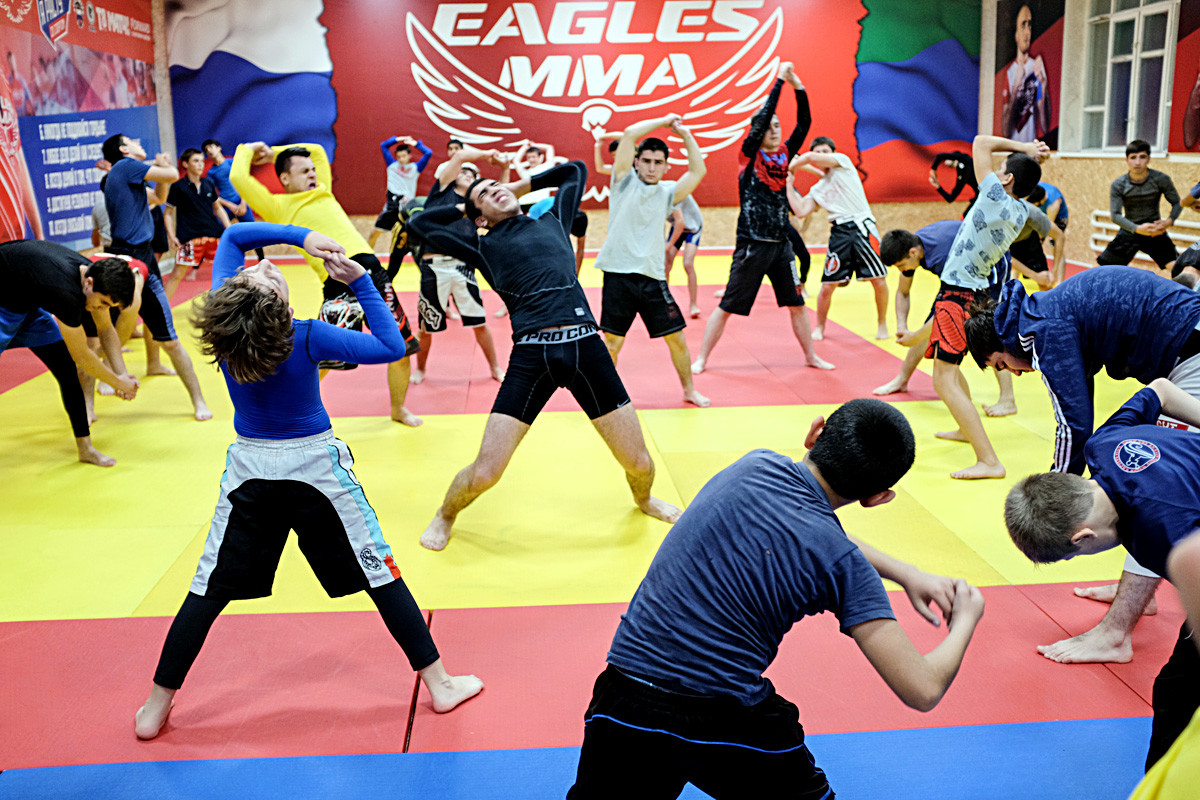 Adult fighters at the Eagles MMA club train young fighters who will soon be ready to replace them.

Teenagers need a lot of experience before they can start training at Eagles MMA. "The most important thing for a fighter is to be grounded in freestyle wrestling. 10-12 years are devoted to this, only then can you go on to MMA," says Abdurahman Gitinovasov, 28, one of Khabib's sparring partners. 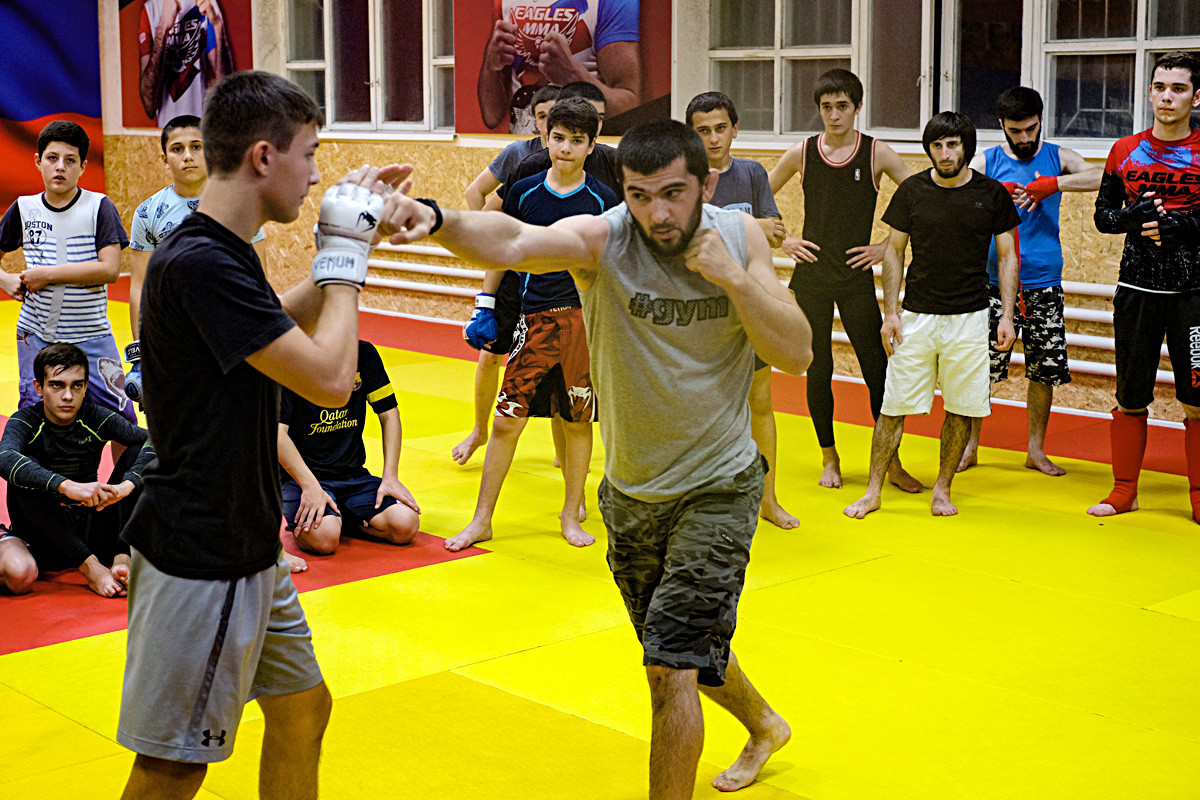 Now Gitinovasov is training for a fight with Abdusamad Sangov in the "Battle on the Volga," an MMA tournament to be held in Samara in December 2018. But after his own training ends, he devotes his late evenings to instructing teenage hopefuls in the dark arts of MMA.

The Spartan gym is owned by Khabib's coach and father, Abdulmanap Nurmagomedov. On a huge poster, one of the few decorations in the modest training hall, Abdulmanap – who holds the title "Master of Sports of the USSR" for freestyle wrestling and now heads Dagestan's combat sambo team – is surrounded by fighters from the Eagles MMA club. A separate poster depicts his son. 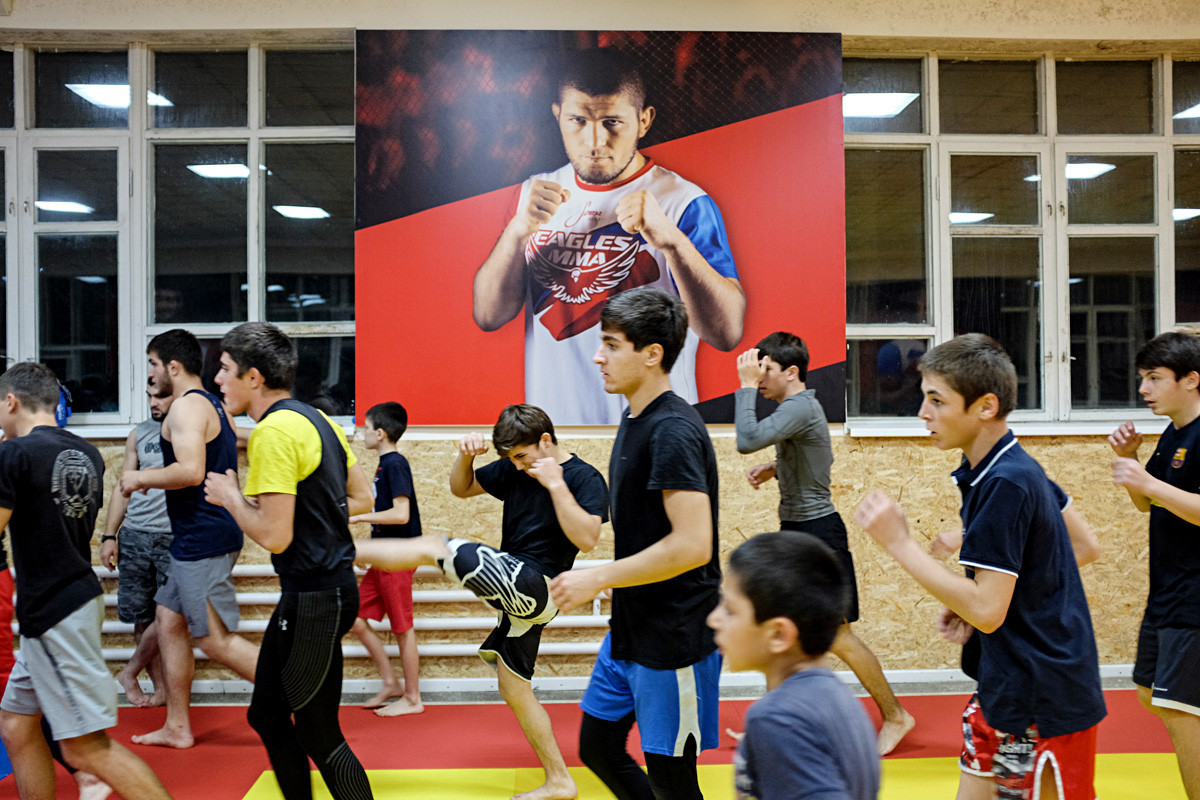 Sparring sessions at the club are focused on striking technique. Although most teenagers here have years of fighting experience under their belts, they come to Abdulmanap specifically to hone their striking skills. Training quickly turns violent. 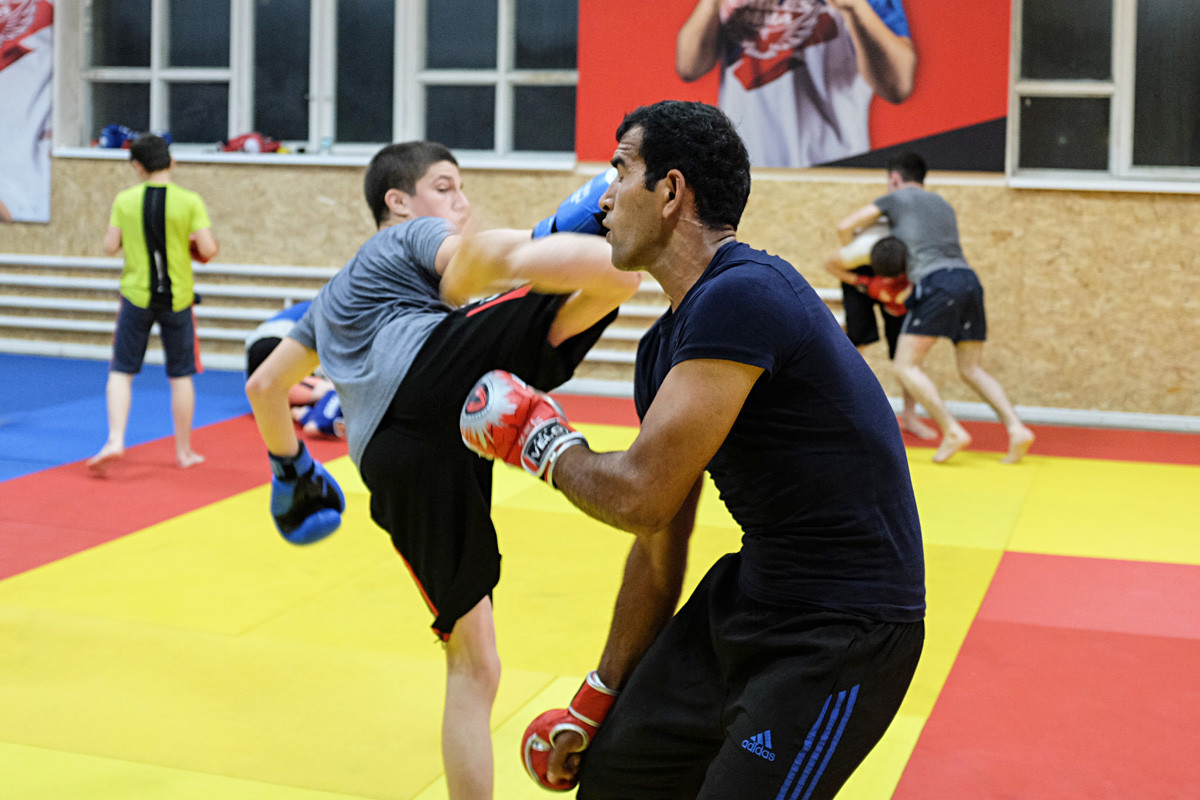 The young fighters wear only the lightest padding on their hands. Other protective gear is sneered at. Helmets are worn only by children under 12. Anyone above this age enters a zone, mentally as well as physically, where sparring turns into a literal bloodbath. 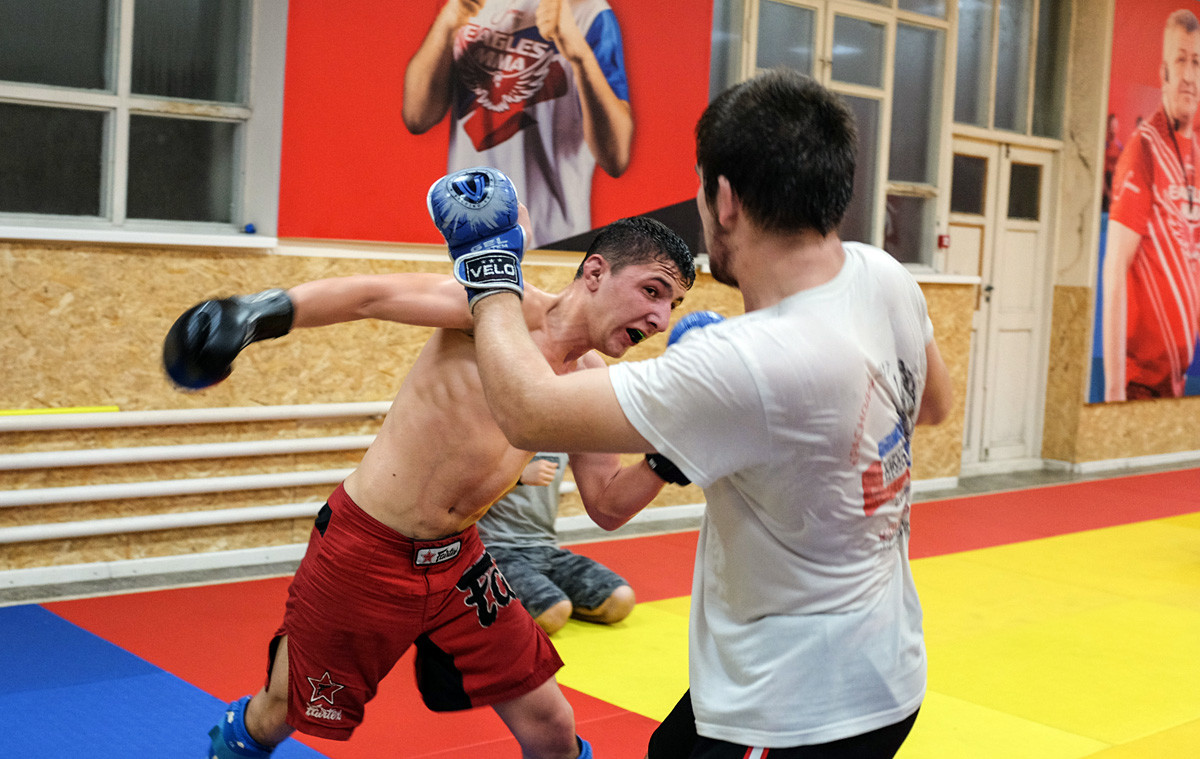 Protective gear is sneered at by Dagestanians.

Anyone watching for longer than 30 seconds is sure to witness a knockdown, or worse. As in real MMA, the coach does not stop the sparring, but only screams at a fighter if he fails to finish his opponent off. "Why did you stop?! Go after him! Can't you see he's covering himself and crawling away? Get down on the mat!" Gitinovasov shouts at one of the teenagers, who a second ago almost knocked his sparring partner's head off with a clean side blow to the jaw. 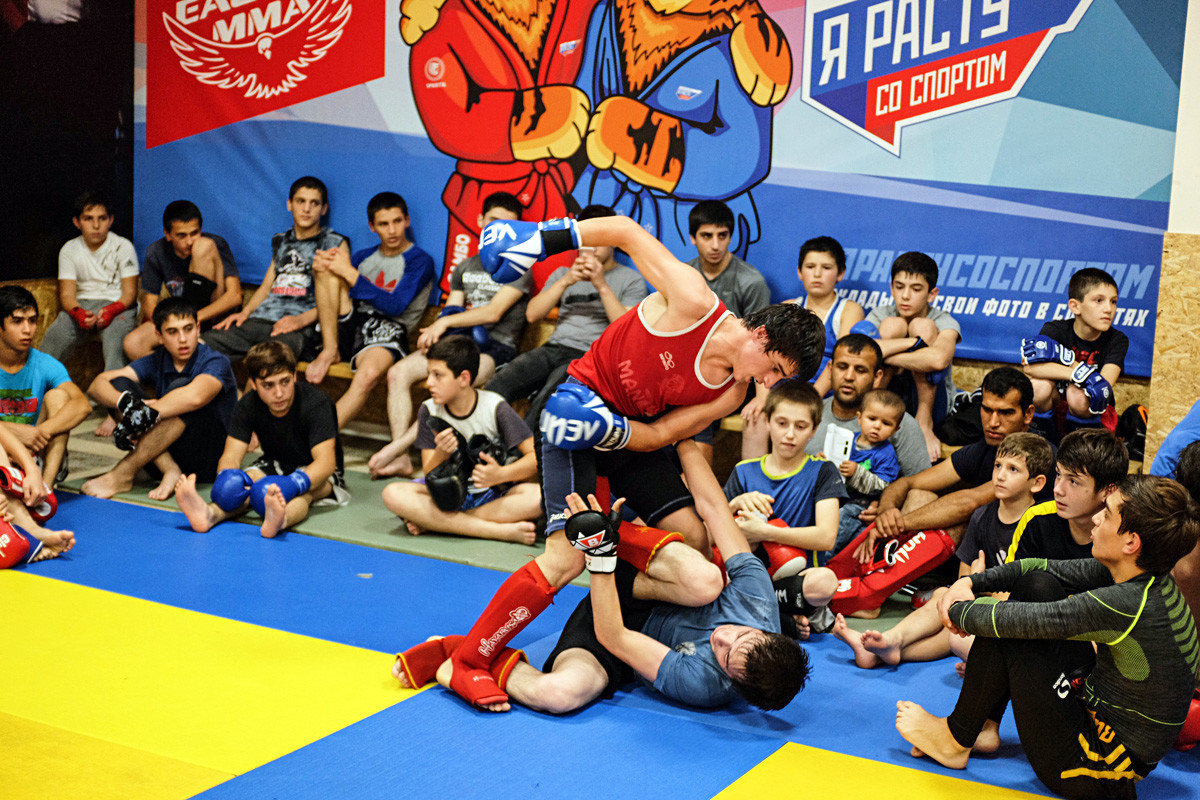 Anyone watching for longer than 30 seconds is sure to witness a knockdown, or worse.

Most do as the trainer says: it's not uncommon to see a 10-year-old boy hammering a motionless sparring partner sprawled out on the floor. Older kids are often hauled onto their feet by the coach himself so that the fist fight can continue.

There are so many fighters and spectators crammed into the small hall that sometimes a knockout blow causes the recipient to fall headfirst into the laps of parents watching from the sidelines.

Such a spectacle, which would shock even diehard fighters, is just an ordinary workout for Dagestani teenagers at Eagles MMA. It is also at this age that youngsters realize that MMA can be a potentially lucrative career. Although MMA fighters themselves do not sound off about precise sums, it is estimated that they earn several tens of thousands of dollars for every appearance in the octagon. 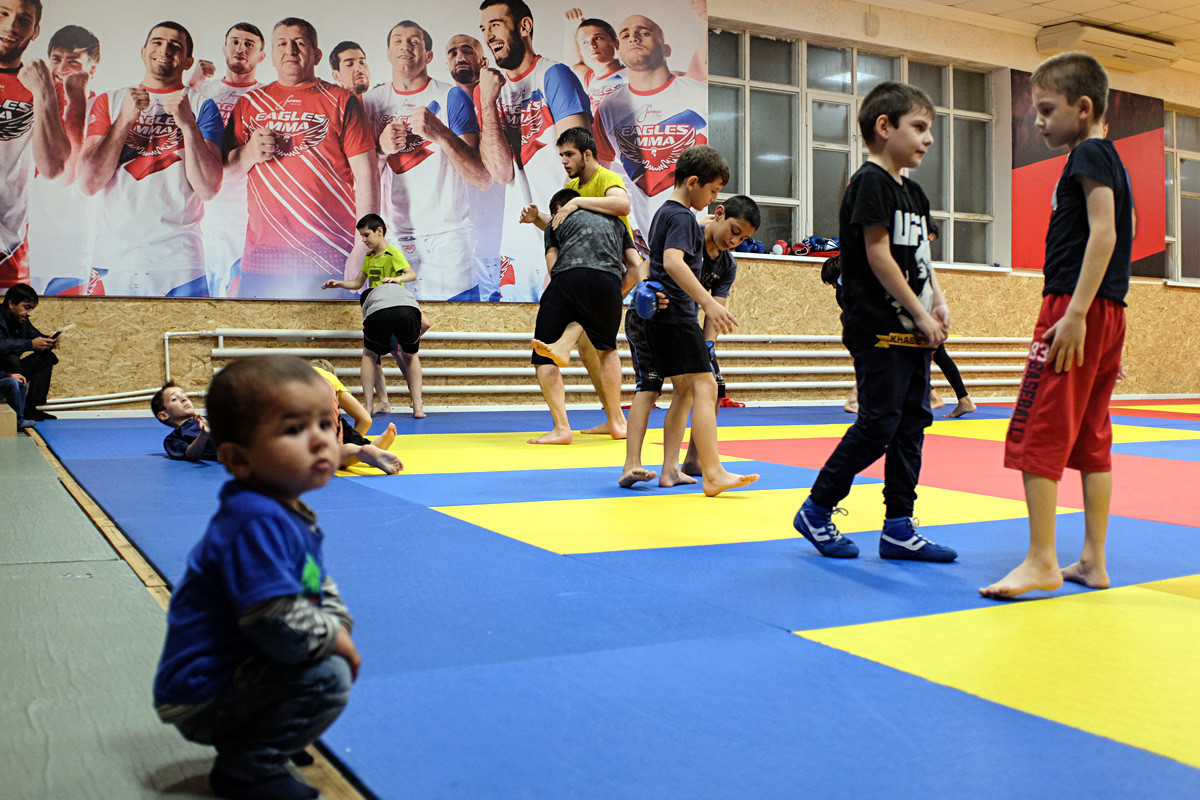 Dagestanis start freestyle wrestling and MMA literally in infancy. Khabib's coach and father, Abdulmanap Nurmagomedov is pictured on the wall poster at the center.

Relatives who finance talented family members through the early years must surely hope to recoup their investment this way. Because the competition in Dagestan is so fierce, even those who don't make it into Abdulmanap Nurmagomedov's team can still be recruited by foreign countries as modern-day legionnaires. This gives such countries a sporting chance of picking up a medal in international competitions.

"People here are hot-blooded. The love for competition begins in childhood. I think it comes from our ancestors," sums up Shamil Aliyev, when asked why Dagestan has made MMA its national sport.

MMA is popular outside of Dagestan, too. Click here to read about Russia's notorious amateur fight club.