Blood, beatings, and brutal KOs: Russia's rookie fight club is not for the faint-hearted 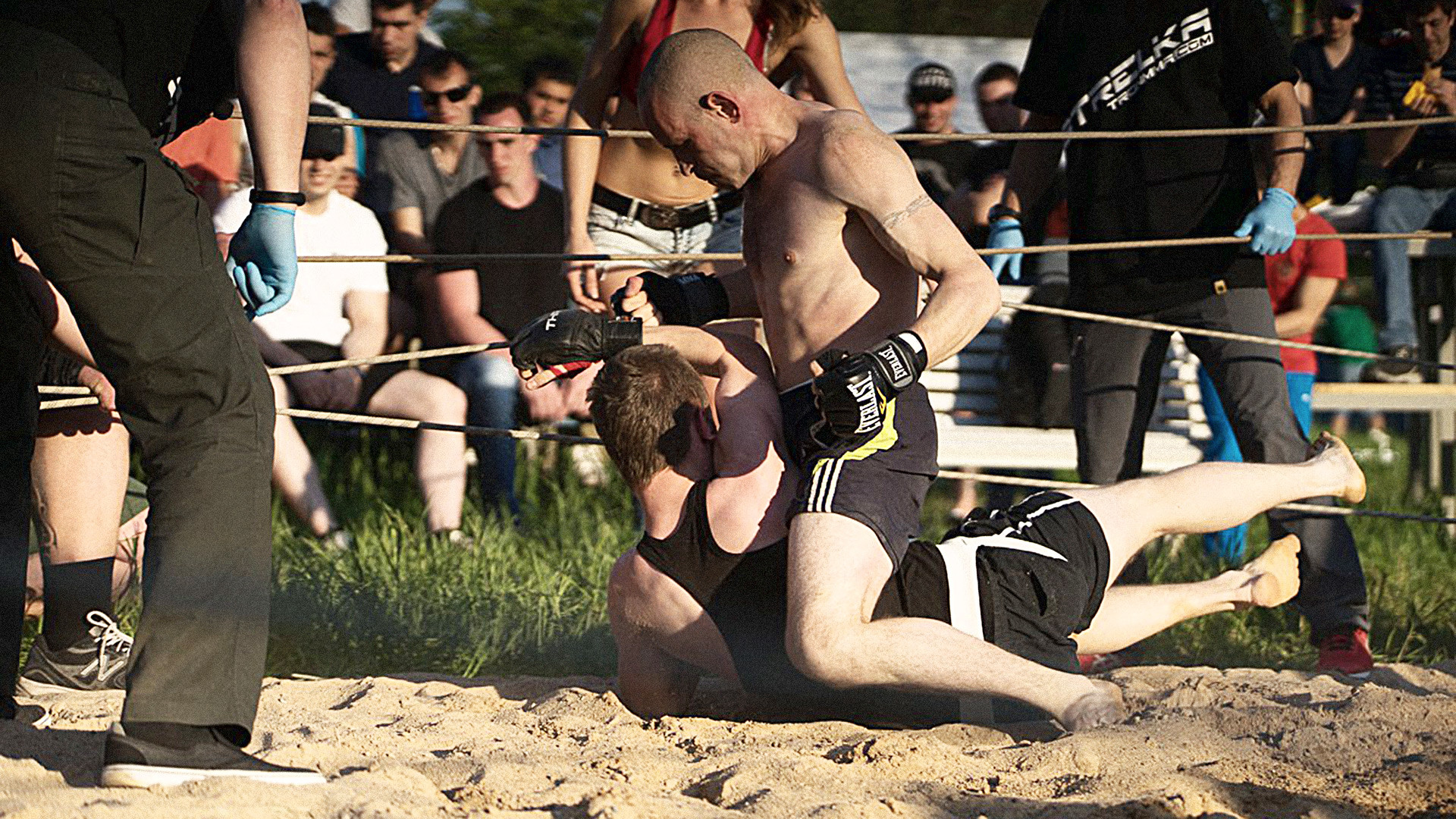 Vecherniy Metallostroi
As Russians sign up in droves for MMA fights, one businessman is building an entertainment empire.

When Andrei Petrantsov, a truck driver from Bryansk, was one day walking past a noisy crowd he had no idea that he’d become an Internet sensation the very next day. On an improvised open-air ring hastily squeezed between two shabby buildings stood a fighter whose opponent hadn’t shown up. An announcer was calling for anyone from the audience to step up and fight. Petrantsov accepted the challenge, and the knockout that followed has since been viewed 24 million times on YouTube.

There’s something that bonds Petrantsov with a sushi chef from Kislovodsk, a longshoreman from St. Petersburg, a hawker from Sochi, and thousands more men from around the country. Regardless of their background and financial status, they fight in the Strelka Championship, an amateur decentralized MMA tournament that’s more democratic than a drunken brawl at a village wedding: anyone can step into the ring and earn the respect of the crowd in a vicious and bloody fight. Naturally, there’s big money at stake.

When 29-year-old Greg (he asked to be identified by his first name only), who worked for famous Russian MMA fighter Fedor Emelianenko, found himself out of a job he thought about opening a sporting goods store. With only a few hundred U.S. dollars for advertising, he found an original way to use them: to hold an MMA fight as a publicity stunt for the future shop. 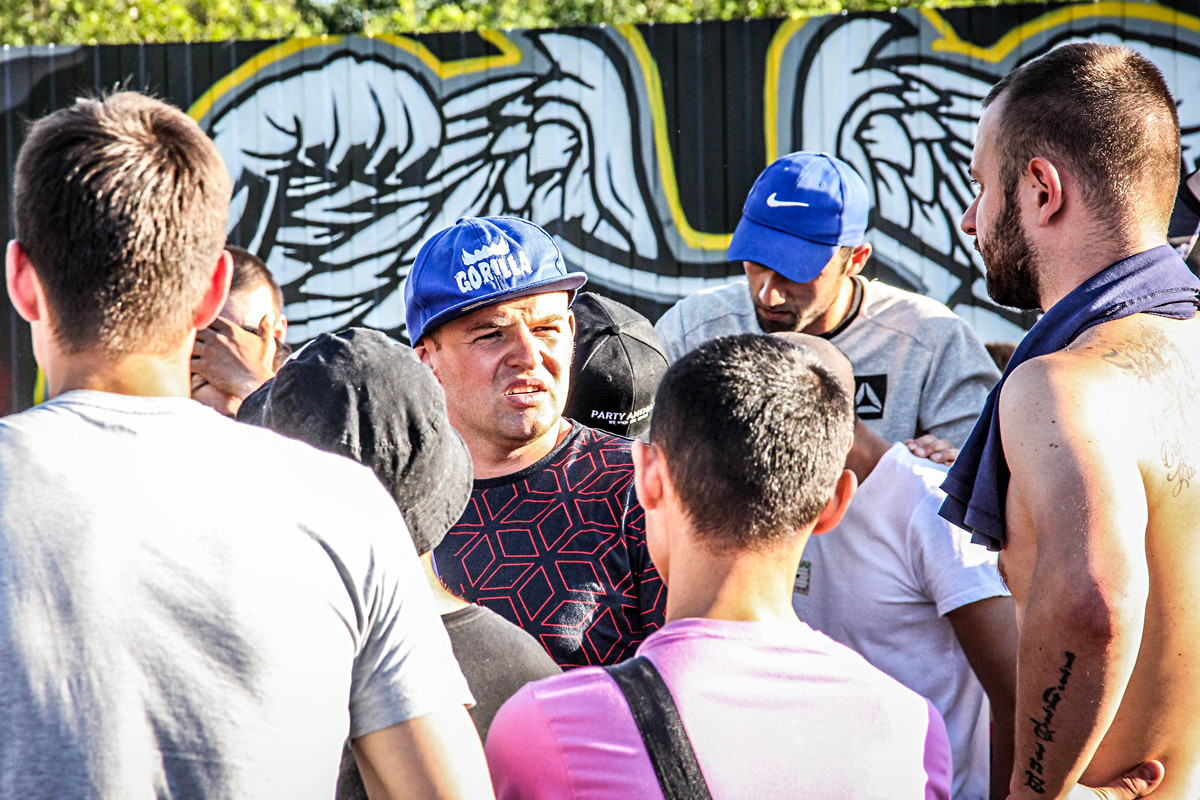 Greg (in the center) is a natural-born showman, and he knows just how to turn a street fight into a full-fledged performance.

“We only had four fighters at the very first event. We offered them a small sum to fight,” said Greg.

He could hardly imagine that soon the fights would eclipse his plans for a shop, and instead become a booming business on its own. Today, Greg runs a company that hosts amateur MMA events in nearly 50 cities in Russia. He registered the Strelka trademark in the U.S., expanded his YouTube channel to more than one million subscribers, and partnered with three foreign promotion companies, including the American firm, TronMMA.

Greg is a natural-born showman, and he knows just how to turn a street fight into a full-fledged performance. His comments regularly make the crowd burst into laughter. 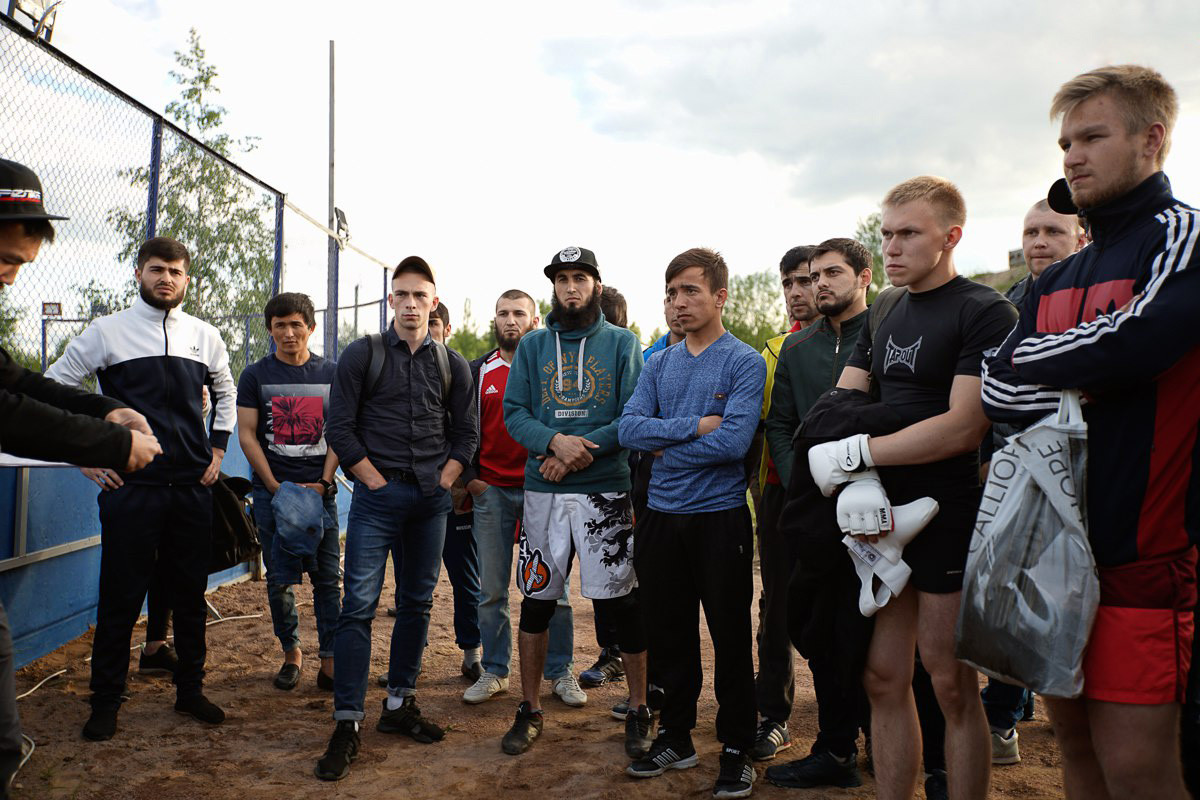 “How should I call you?” he asks a fighter preparing to step into the ring. “You look a lot like Pushkin,” he exclaims, and the crowd immediately echoes his conclusion. Many fighter nicknames come from his witty offhand remarks, and they stick: Four-eyed, Battle Gnome, Dentist, Cool Jew, School kid, and more. One of his quips, however, got Greg in trouble with the Federal Security Service (FSB).

“We had a fight night and then uploaded a YouTube video titled ‘Uzbek twins vs. crazy Russian guys,’” said Greg laughing at the debacle of his own making as the title could be interpreted as ‘inciting ethnic hatred’ – a criminal offense under Russian law. “The next morning the FSB called us, and starting from that moment we cooperate with them.” 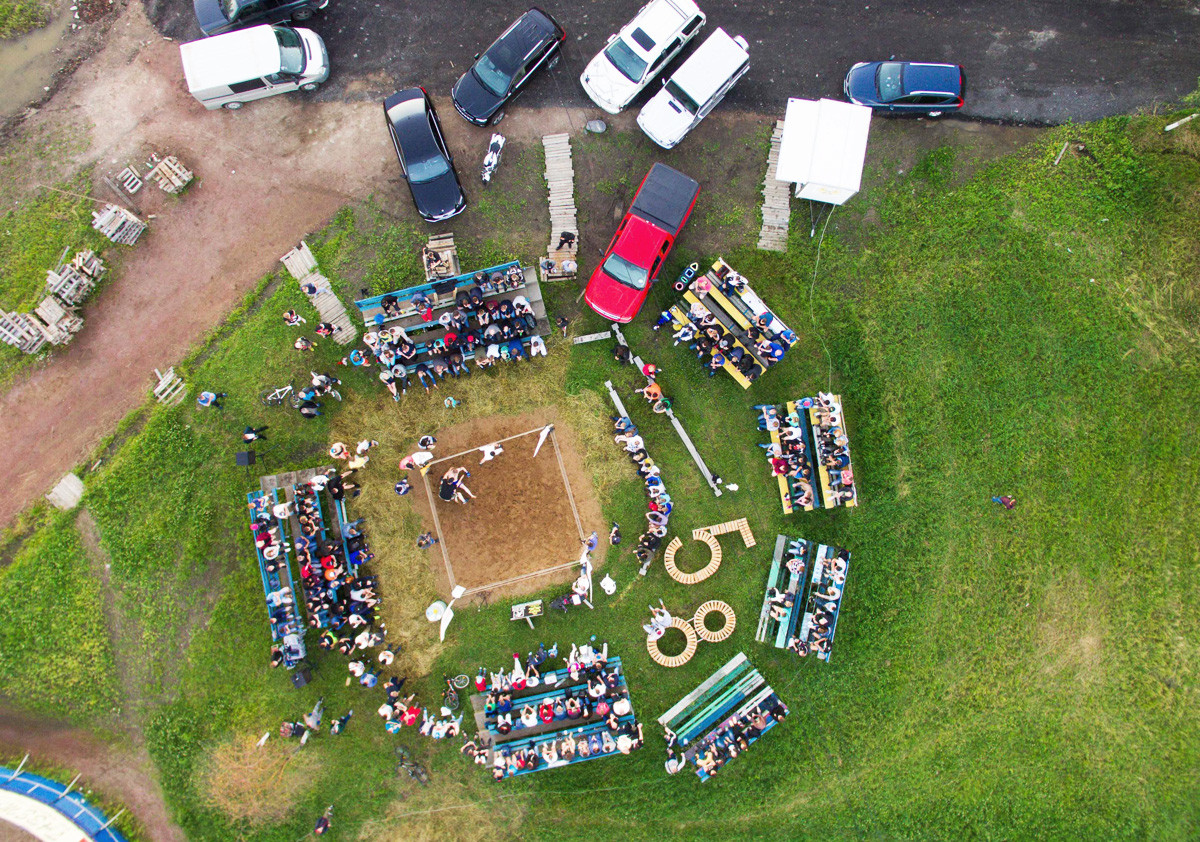 Greg has to report about Strelka to the FSB, and two agents in plain clothes are sometimes present at the venue where fights are held. Despite this minor incident, Greg has good relations with local authorities wherever he holds Strelka events. Every fight night has to be coordinated in advance and a medical worker must be present at the venue — this is all it takes to hold an amateur MMA event in any city in Russia.

Greg's project thrives on Russian enthusiasm for fighting. Most men come to the ring for free, and the rush of adrenaline is their ultimate prize. But a handful of elite fighters have figured how to translate hype into money. 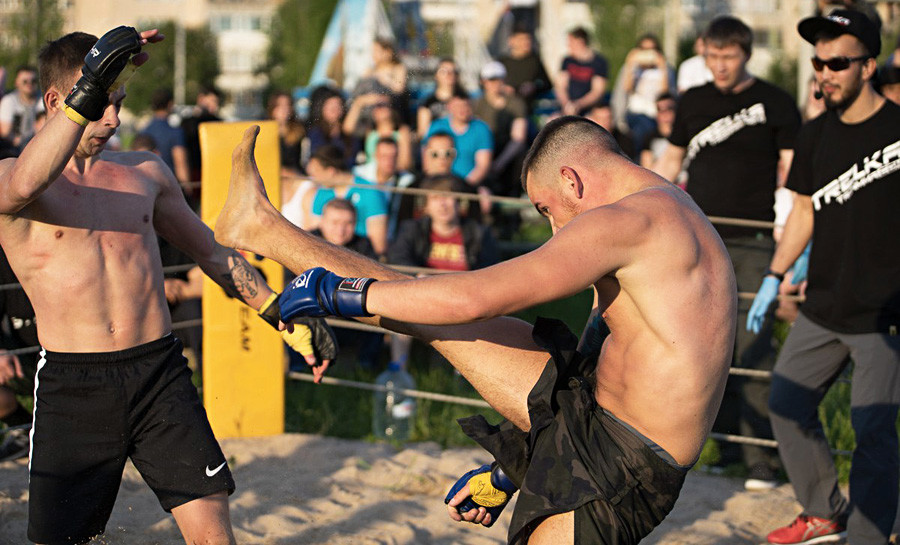 “We came to St. Petersburg for the All Seasons Finale,” said Alexei Meshkov, who is from Kislovodsk (1,350 km south of Moscow), and known for his nom de guerre, Sushist (Sushi chef). “They paid for our trip, rented a hotel room, and promised 40,000 rubles ($600) for a victory.”

This 20-year-old has had only five fights but managed to build a large fan base, sending the number of YouTube views of his fights through the roof. Sushist quickly realized what fuels public approval in amateur MMA. 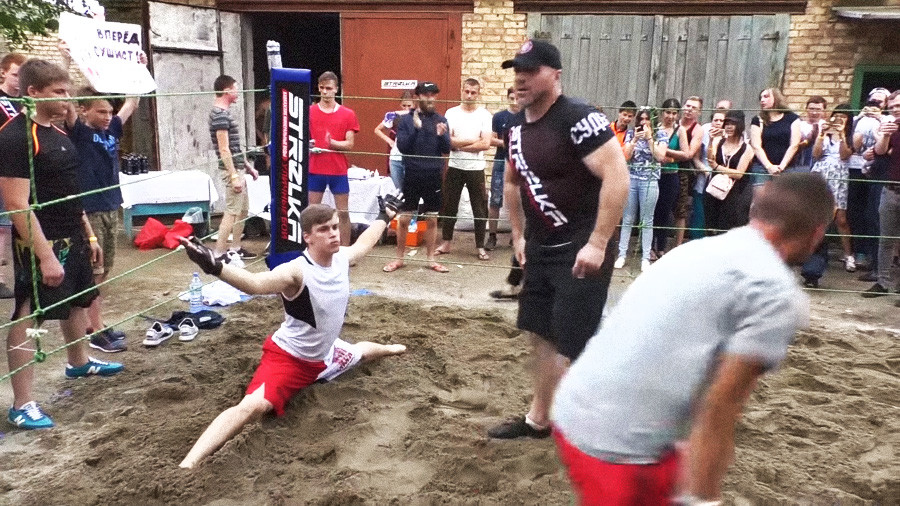 Sushist, a 20-year-old fighter, has had only five fights but managed to build a large fan base, sending the number of YouTube views of his fights through the roof.

“We have other strong fighters in the Caucasus, but we are the only ones who came to St. Petersburg’s Finale. We understand that the record of a fighter does not mean as much as whether he can make a show. If you can make a show, then you’ll get to the Finale,” said Meshkov, grinning to expose his broken front tooth.

His appearance matches his furious fighting style. Wearing a sushi chef uniform, Meshkov exclaims bluntly: “I’m Sushist and I came to turn my opponent into a steak!” He steps into the ring and delivers on his cocky promise. The crowd goes wild and chants his nickname.

Muscovite Danil Aleev, known as Regbist (Rugby player), is one of the most feared Strelka fighters. At 24 years of age, he weighs 78 kilos and knocks people out cold. Despite his reserved demeanor, he turns a fight into a pure survival show that’s too scary to watch. 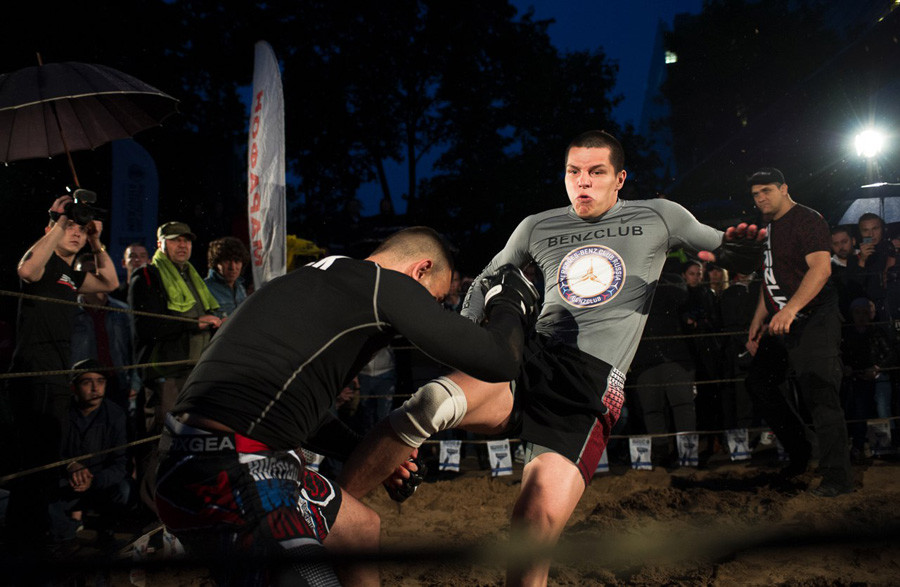 The fights of Danil Aleev, known as Regbist (Rugby player), are too scary to watch.

Strelka managers pay Aleev for his fearlessness and determination with “experience points,” an internal currency devised by Greg to stimulate fighters to return to the ring and make fights more enthralling. One “experience point” equals 0.7 rubles and every fighter can cash out what he has earned at any given moment, Greg said. As of today, Regbist has held four fights and earned 21,000 rubles ($310) worth of the internal Strelka currency. 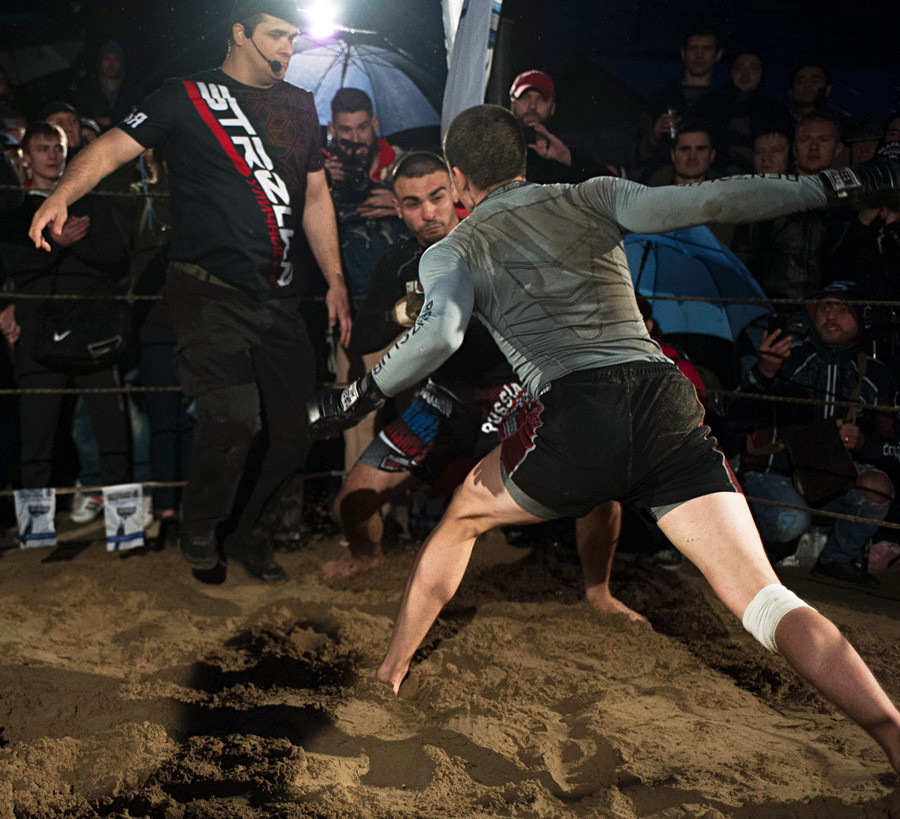 Despite Regbist's reserved demeanor, he turns a fight into a pure survival show.

There are now thousands of fighters all over Russia and the CIS in Greg's database, and his own explanation for this skyrocketing popularity is simplicity.

Everything – an improvised ring with sand instead of canvas, two inexpensive cameras to record fights, two pairs of gloves passing from one fighter to another – create an aura familiar to anyone who ever fought in a schoolyard.

There are no men in posh suits nor ladies wearing diamonds, no VIP entrances, and no celebrities. Strelka is a much more democratic enterprise; its fights are for young men and women from the outskirts, for truck drivers and accountants, for cooks and coal miners, for longshoremen and barmen.

A Strelka fight is Russia served raw, and if you want to be a part of it just rise when asked: “Who wants to fight next?” 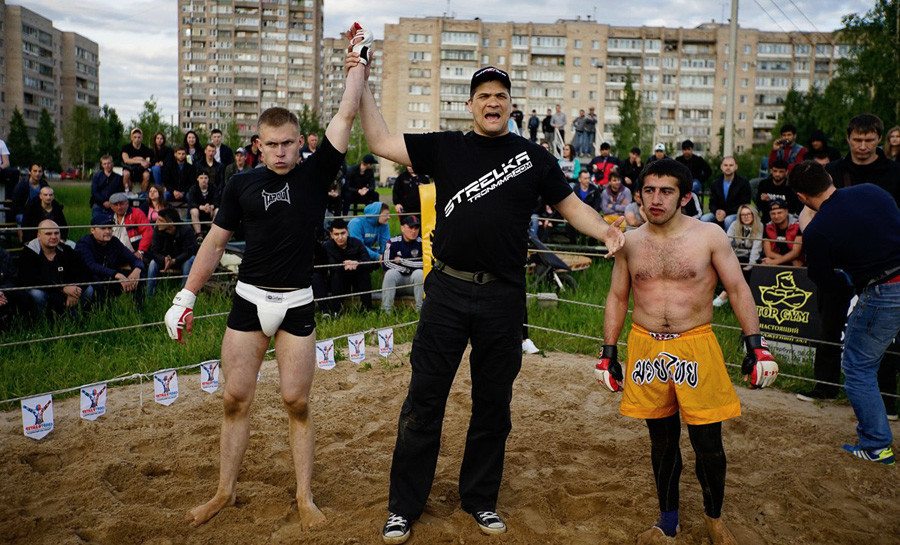 Even the most famous Russian writers were quick to fight. Click here to read about the most notorious of them.