Not only Khabib: 5 of the most brutal and biggest brawls in Russian sport 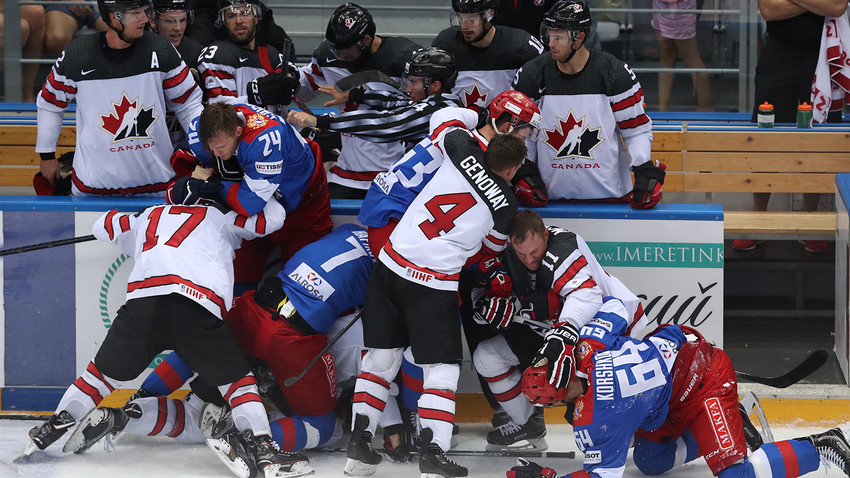 Artem Korotaev/TASS
The recent Nurmagomedov-McGregor fight that turned into a melee is far from being the only violent incident involving Russian athletes. In the past few years, sport arenas often have been transformed into scenes of very poor sportsmanship.

year’s hockey match between Russia and Canada took the tensions between the two major hockey powers to a new level. The two teams met in the Sochi Hockey Open, and by the end of the second period one of the Canadian players blatantly pushed his Russian counterpart against the boards, even though he didn’t have the puck at that moment. Other Russian players rushed to defend their insulted teammate. Only with great difficulty were the two referees able to stop the brawl. The Canadians lost the match 2:3.

In March last year, during a Kontinental Hockey League match between two Russian clubs, Lokomotiv and SKA, the struggle for victory suddenly became even more ferocious. It started in the middle of the match when the Lokomotiv defenceman, Staffan Kronwall of Sweden, was apparently upset that a member of the opposing team approached the goalie too closely after the referee’s whistle. While the brawl started at Lokomotiv’s goal, it quickly turned into three separate fights. The and most severe was the instigator who relentlessly pursued the offender, Ilya Kablukov. Officials could not stop him punching Kablukov again and again. The Swede definitely won that battle.

only in hockey do tempers flare: Football seems to be no less prone to violence. The biggest mass brawl in Russian soccer history took place in 2004. A rash move by a CSKA player angered his opponents from the other team, Saturn, and nearly all players on both sides rushed headlong into ‘battle.’ Next, the coaches and trainers joined in. Some fans couldn’t restrain themselves and also took to the field. The referee evicted two players from each team, but that did little to calm the situation, and the match was halted.

heated Caucasian temper was clearly evident during a match of two junior teams in 2011 in Chechnya’s capital, Grozny. The local team, Terek, hosted a match with Krasnodar, whose player, Spartak Gogniev, was booted out by the referee after scoring two goals. Obviously disappointed by that decision, he pushed some of his opponents, as well as the referee, when leaving the field. However, when he reached the sideline he suddenly found himself attacked by local fans. Even though he retreated to the locker room, the fight continued there, where it ended badly for the player. He had a rib and nose broken, and suffered a concussion.

“All of you calm down! Please take your seats! We are holding a competition devoted to the memory of the great wrestler, your brother, and comrade! Do not dishonor the world of sport! Please disperse!” a referee was shouting these words into a loudspeaker during yet another infamous brawl, which took place at last year’s wrestling tournament for juniors in Krasnodar (1,350 km south of Moscow), which honors the famous wrestler, Besik Kudukhov. The brawl started when one wrestler was screamed at by an opposing coach, who then hit the wrestler. Others joined the melee, including fans. The mass brawl was short but ferocious.