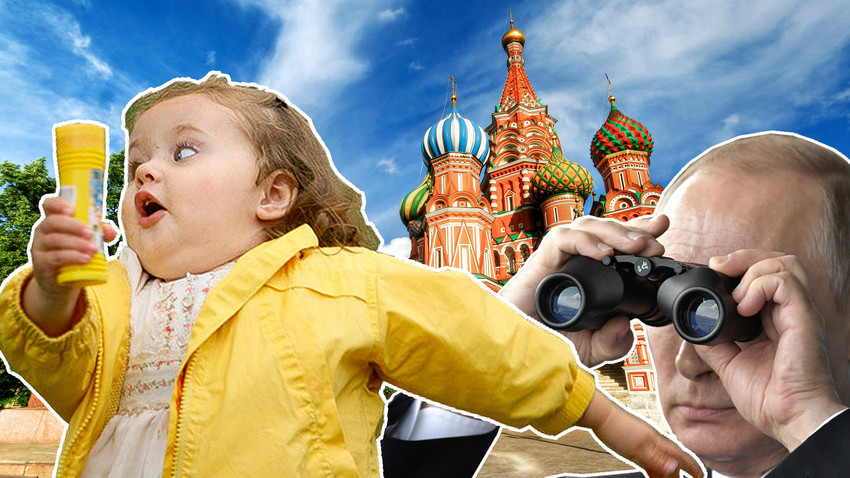 Anna Jurkovska; Aleksey Nikolskyi/Sputnik; Getty Images
Russia Beyond is launching a new column, ‘Investigation,’ in order to provide answers to reader-submitted questions so insane they deserve their own article. We were recently asked: “Are Russians allowed to leave Russia?” Mostly, it’s a fat “No,” but this difficult question warrants a closer look.

One obvious thing is that leaving Russia simply endangers our democracy. Consider this: if our citizenry crosses over the Russian border and visits the Free World, our government runs the risk of having its dark secrets exposed. Just think about the damage if they were to mingle with non-Russians and reveal just how horrible our lives really are. Facebook would immediately be flooded with so much truth, Russia simply would not survive the social media onslaught.

Your next question may well be: “But what about Russian celebrities I’ve seen outside Russia, such as in Hollywood movies?”; or “What about my friends who have always said they were Russian? Are they lying?”

You might want to sit down for this part because there’s no easy way to say it: the people you saw claiming to be Russian were not Russian at all.

Because they’re not human!

The Russians you’ve met are something similar to the Replicants from the Blade Runner movies.

As you might have heard in the news, nearly all the money in Mother Russia’s state coffers goes toward national defense. Well, the cutting edge of that effort is a program for creating the aforementioned ‘replicants’ – android copies of actual Russians, but well spoken and always saying nice things about their country such as: “Come to Russia, you’ll love it”; or “spaseeba nastrovye”; and other pre-programmed phrases. President Vladimir Putin personally presided over the choice of phrases.

The conspiracy runs so deep that it is only known to 150 million Russians, and no one outside that intimate circle. And now - you.

We all belong to the species Homo sapiens, but what the textbooks aren’t telling you is that Russian skin foreign air. The very oxygen in ‘true democracies’ feels like vinegar poured into an open wound for us.

Places that promote equal representation for people who comprise about three percent of the population create particularly adverse health effects for a Russian.

One especially nasty incident happened to an FSB operative whose mission was to eliminate a target at a crowded basketball game in Europe. He suspected something was afoot when the players ran out onto the court, greeting thousands of silent and very perplexed fans: one player was very small, the other extremely obese, another had one foot, and another was a conjoined twin.

The Russian operative couldn’t believe his eyes. The entire audience appeared not to notice that the rules of the game could not be observed in any meaningful way, and were instead busy virtue-signaling over Twitter about promoting a form of basketball that does not work in practice, but celebrates diversity. Classified materials obtained by Russia Beyond speak of the skin on the agent’s hands almost melting as he witnessed this. He was lucky to get out alive and return home to his wife and children.

If you’ve gotten this far, two things are possible: you either believed what was said (in which case, seek professional help now!), or you’ve decided to stick around to see if the third reason we give would be an even bigger waste of your time than the first two.

In truth, Russians enjoy the same rules regarding leaving and entering their country as any other constitutional democracy. If you’re not running from the law, you’re free to leave as you please.

Notable exceptions for Russian citizens include being enrolled in a military academy, particularly the federal kind. Permission to leave must be obtained. Active federal agents are not allowed to exit - which is not different to most countries.

Other barriers to leaving are not too different from other open societies. They include citizens with access to classified information; military conscripts; citizens subpoenaed for jury duty; those attempting to evade legal restrictions; and those giving false information in official documents.

Really hate to disappoint, but Russia is not North Korea.