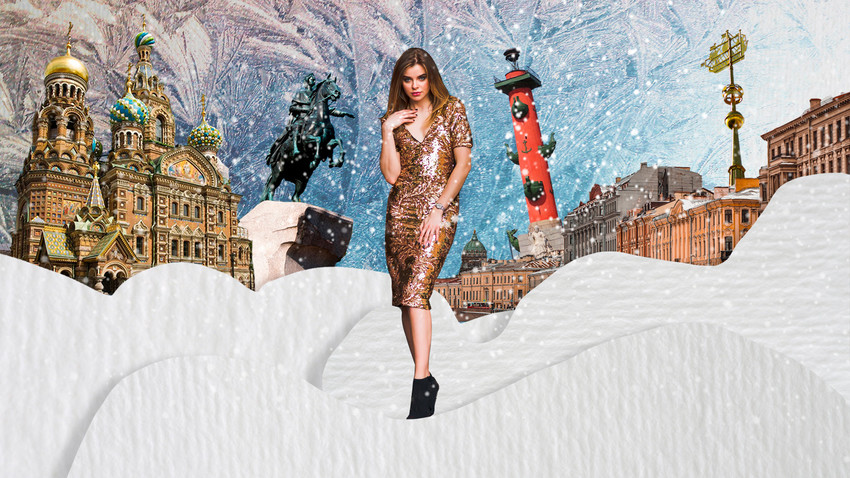 The man who works in the shop down the street from my apartment sums up St. Petersburg winters quite well, here is a loose translation of what he says:

Folks in America often say to me, "bet it's cold up there."

But, the true malignancy of winter "up here" has nothing to do with the cold; being so far north means that, this time of year, the sun rarely shows its face, if at all. We are at the end of November, and the sun hasn't shone for twenty-seven days.

I know this from the scratch marks on my bookcase.

Winter in St. Petersburg is like tumbling down a Loony Toons-style rabbit hole of perpetual darkness; there is no up or down, you cannot see the end or even remember the beginning and the famous White Nights feel like something you read about in a book once, so very long ago.

In the face of darkness, Russians fight with style. I remember – so very long ago, at the beginning of November, my girlfriend said to me, "I can't wait for winter."

"I get to wear my stylish jackets and sweaters," she said.

And I shuddered and told her, "no one will be able to see anything through the darkness and depression!"

"Bah! Americans are babies," she said. And that was that.

And, winter progresses, I look back waywardly on that conversation as I traverse, dumb and blind, through the cold dark streets. She is right that winter brings an opportunity for Russians to exhibit fashion trends I never saw in America. Often in we see Russians donning big fur hats, fur coats, fur socks, fur mufflers, and Kalashnikovs, but the truth is a different story.

In Russia it seems that the further you head on either side of 30, you eventually turn into a multi-layered marshmallow. My friend Ivan and I play a game each winter; Old lady or child? It is harder than you'd think.

Parents tuck their children into full-body puff suits and send them out into the world to be unblemished by any weather-related dangers while the fat jackets of old women seem to get longer, and longer, and longer to the point where they by puffy-fluffy warmth.

As well, there is a massive retro-trend that has made its way around the 20-somethings of St. Petersburg that could fill Brooklynn with the rabid foam of jealous hipsters. Once I stayed in an Airbnb where the legs on a broken chair were replaced with two almost-even pieces of plywood leading me to the realization that Russians aren't going to throw something away unless they have to. This means you can find a boat-load of second-hand clothing. Second-hand stores (which, if you read Cyrillic are phonetically called “second hand”) are on every other street and you can often spot young people in old army jackets, thick handmade outerwear and if you're extra lucky – denim.

It is also worth noting that in winter Russian women reveal themselves as secret arctic wizards capable of defying the laws of physics. Ice is everywhere. I buy boots, I buy chains for my boots, I walk at a only to fall over, look up and see a young Russian woman dressed to the nines, strolling by in high heels. This is quite common, and I am always fascinated by how well Russian women have learned to make their way through the slippery streets with weapons for shoes. They rarely ever fall, unless of they are drunk, because I'll be damned if the laws of physics ever miss a chance to party with their old comrade, vodka.

And lastly, it wouldn't be Russia if you didn't occasionally find a brawny young man strolling through the five-degree weather with nothing but a T-shirt on, often leading a polar bear around on a cat leash.

Read more: 3 situations in which an American felt like a dog in Russia