KVN in 1987. Sure, it looked kind of bizarre but was a lot of fun for the Soviet youngsters.

Igor Zotin/TASS
It began as a  prank that went further than expected, arousing the ire of the Soviet government. But today, the show is still on the air.

Guess what the following Russians have in common? A producer who wrote a series about a corrupt mayor and writes viral satirical songs; a businessman who runs a company producing content for the most popular entertainment channel; and two co-hosts of the No. 1 late-night show.

The answer is that once they all had to wear bizarre costumes and perform some kind of student-oriented humoristic theater in front of an audience of 10-50 people. All of them (Semyon Slepakov, Artur Djanibekian, Dmitry Khrustalev and Alexander Gudkov, respectively) started their very successful show business careers in KVN, a show that has aired in Russia since the time of Nikita Khrushchev’s rule. And so did thousands of others. 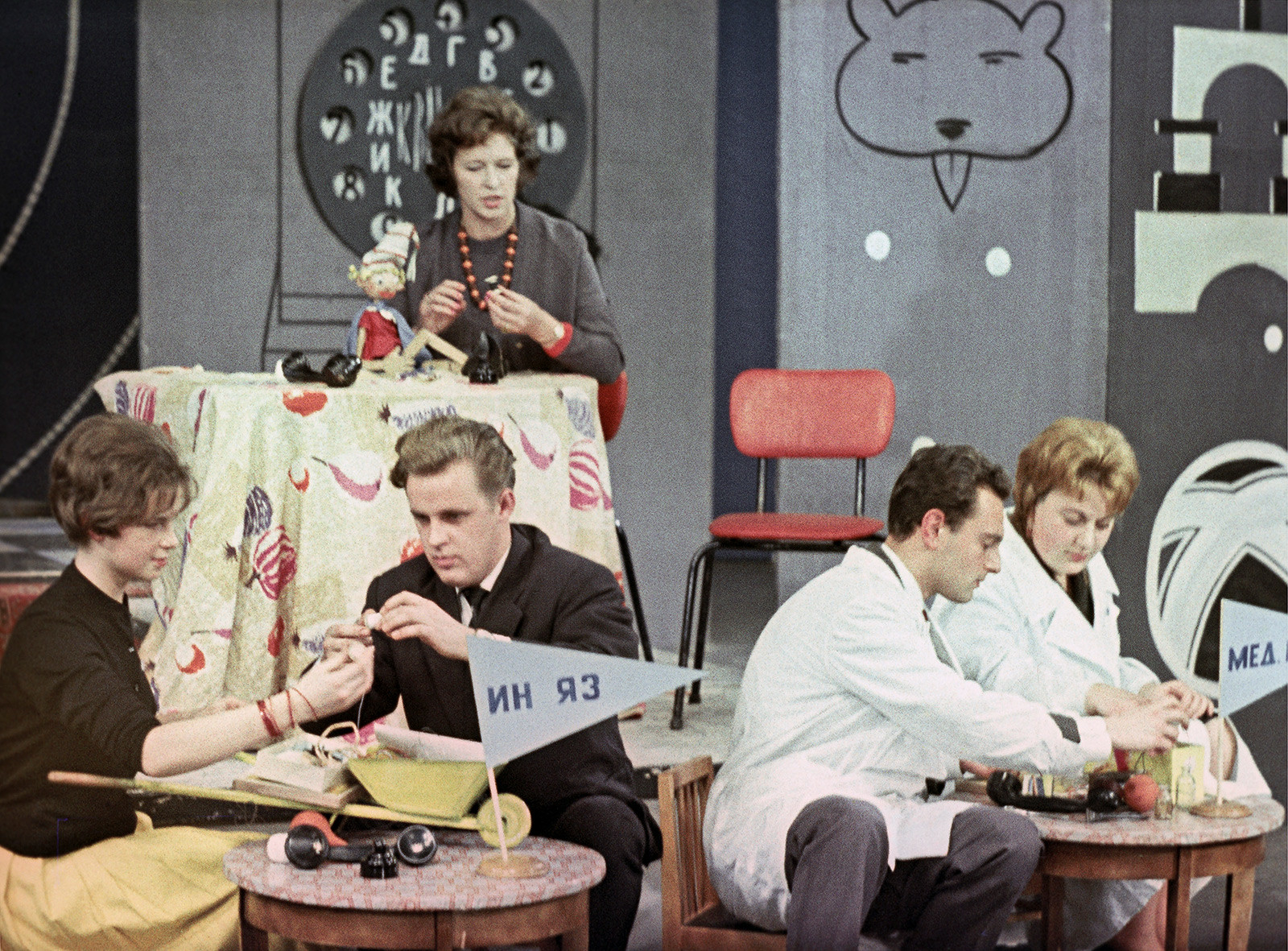 One of the first KVN shows aired back in the 60s. Right now it's hard to tell what exactly was going on there, perhaps some tech-kind competition.

KVN (Club of the Funny and Inventive) was born in 1961, on the private initiative of Moscow students. From the beginning, the show was a competition of different teams, giving funny answers to questions from the jury and the audience, and showing comic sketches, with the jury accessing their performance.

That simple formula, however, quickly led to trouble because the young comedians were joking, among other things, about Soviet politics. The powers-that-be, unhappy about this, closed KVN in 1972, for 24 years. That was the Soviet approach to a good joke. 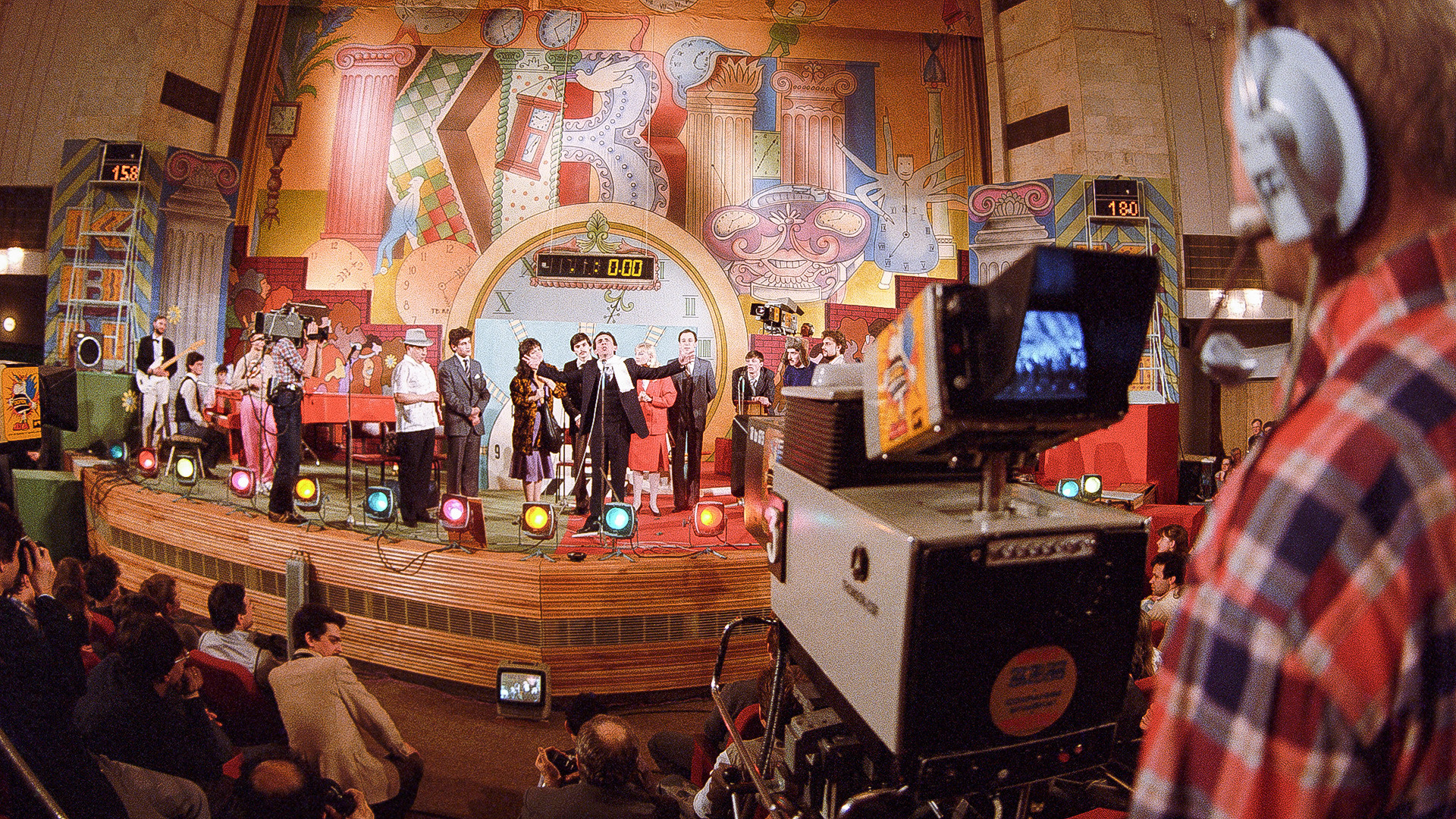 Nevertheless, times eventually changed, and the program reappeared in 1986. The success was overwhelming, and the revived KVN quickly turned into a mass movement, with the TV competition as the top of the iceberg. Every large institute and every city had its own KVN team, sometimes even a league of teams.

The television version of KVN was the most popular humor show for the youth in the country. The 1990s became a golden age of its humor. “We were cooler than many show business stars,” recalls Dmitry Khrustalev, who used to play in the extremely popular St.Petersburg team and now co-hosts the late night show, Evening Urgant, on Channel One. “Performing on stage I felt, at the very least, like one of the Beatles!”

Building an empire of laughter 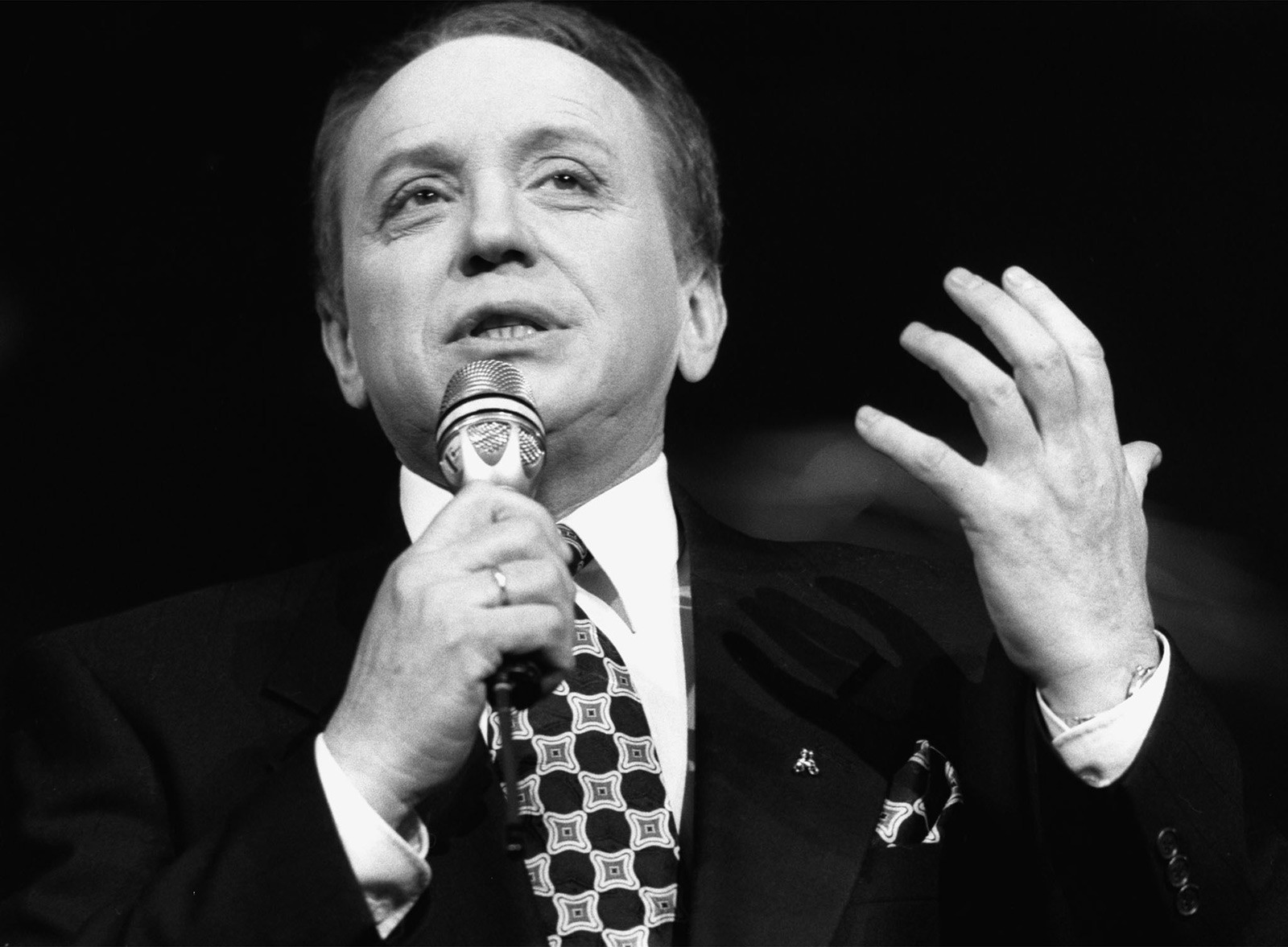 Alexander Maslyakov, the man who runs the show.

In 1997, one man decided to cash in big time on  KVN. Alexander Maslyakov, host of the show since 1964, registered AMiK, the company that since has a monopoly on all KVN content produced for television.

AMiK also runs all the official KVN leagues across Russia (by now, there are more than 70), with each KVN team competing in an official league paying for the right to participate. According to Forbes Russia (link in Russian), total revenue equals more than $3 million a year.

KVN games air on Channel One, giving young people the opportunity to introduce themselves to the audience and shortly after to be able to become actors, scriptwriters, producers and so on. But to get to that top TV league every team has to crawl for 3-4 years through the lower leagues, constantly paying money for participation and comic material. 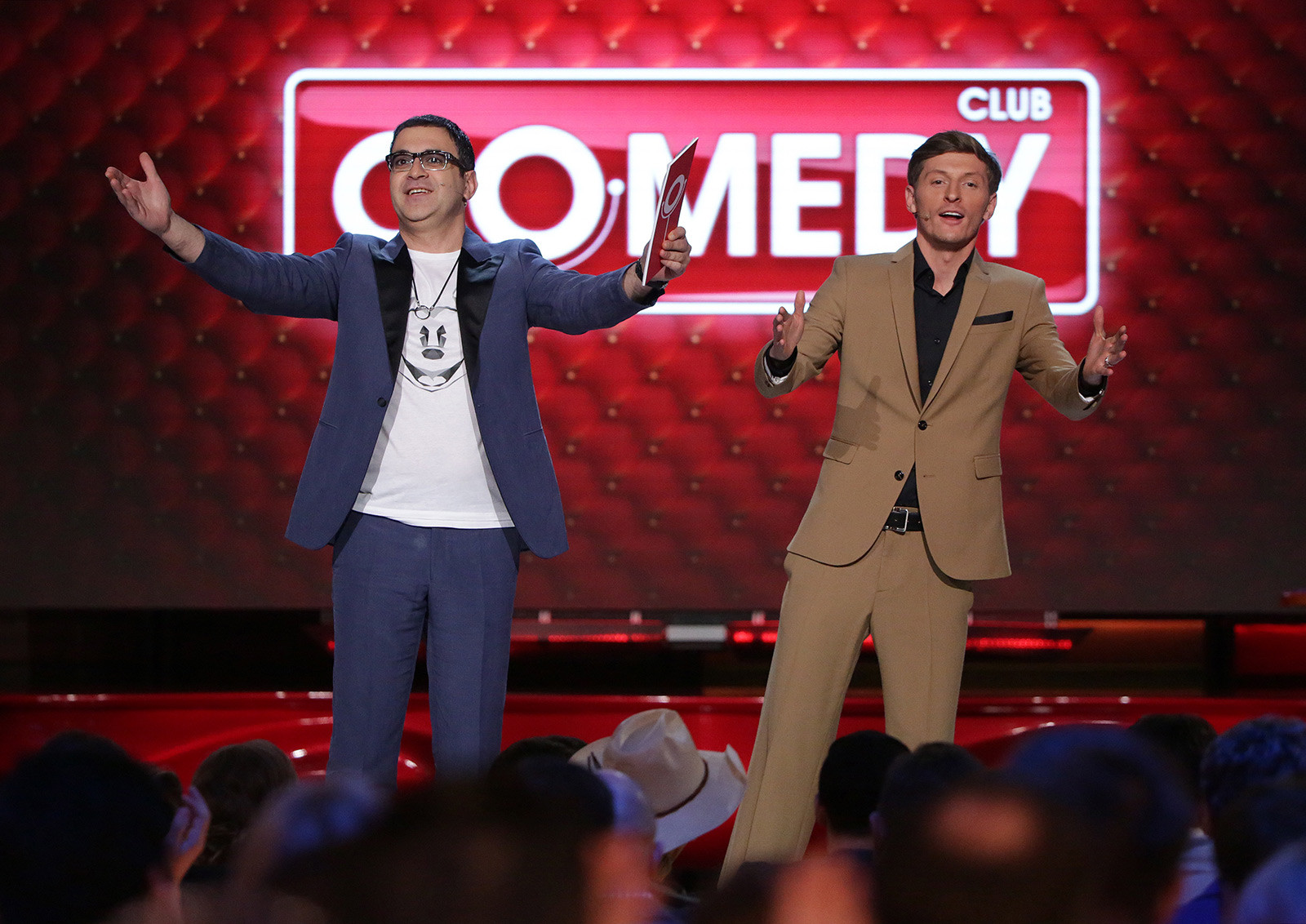 the 2000s, KVN’s monopoly on humor was shattered when in 2003 several former KVN stars from the New Armenians team invented a new show called Comedy Club, which gave humor a different approach - with more straightforward and dirty jokes, and without competing teams: just comedians doing sketches and mocking the audience.

With time, Comedy Club turned from just a regular show into another empire, with the company Comedy Club Production providing different types of content for TNT, the most popular entertainment-only TV channel in Russia.

Alexander Maslyakov and other KVN icons remain skeptical about Comedy Club. “The guys who do it are talented, but I don’t like the base that they chose for their start. I despise smutty humor,” Maslyakov said in an interview. Nevertheless, Comedy Club, which has been on for 13 years, continues to grow its audience, trying new formats - for instance, they launched the first stand up show in Russia (called Stand Up), and experiment with Western-style humor. Meanwhile, KVN remains almost unchanged since the 1990s.

Youtube vloggers also have a piece of the pie in the humor industry, and also rival KVN. “There is a lot of humor now. In the past, KVN had all the best writers, all the best actors, and now they are spread around different channels, different projects. You see less and less brilliance in the humor of KVN because it pays little to participants,” said Ilya Sobolev, one of the most successful stand-up stars in Russia. He also used to play but gave up long ago. 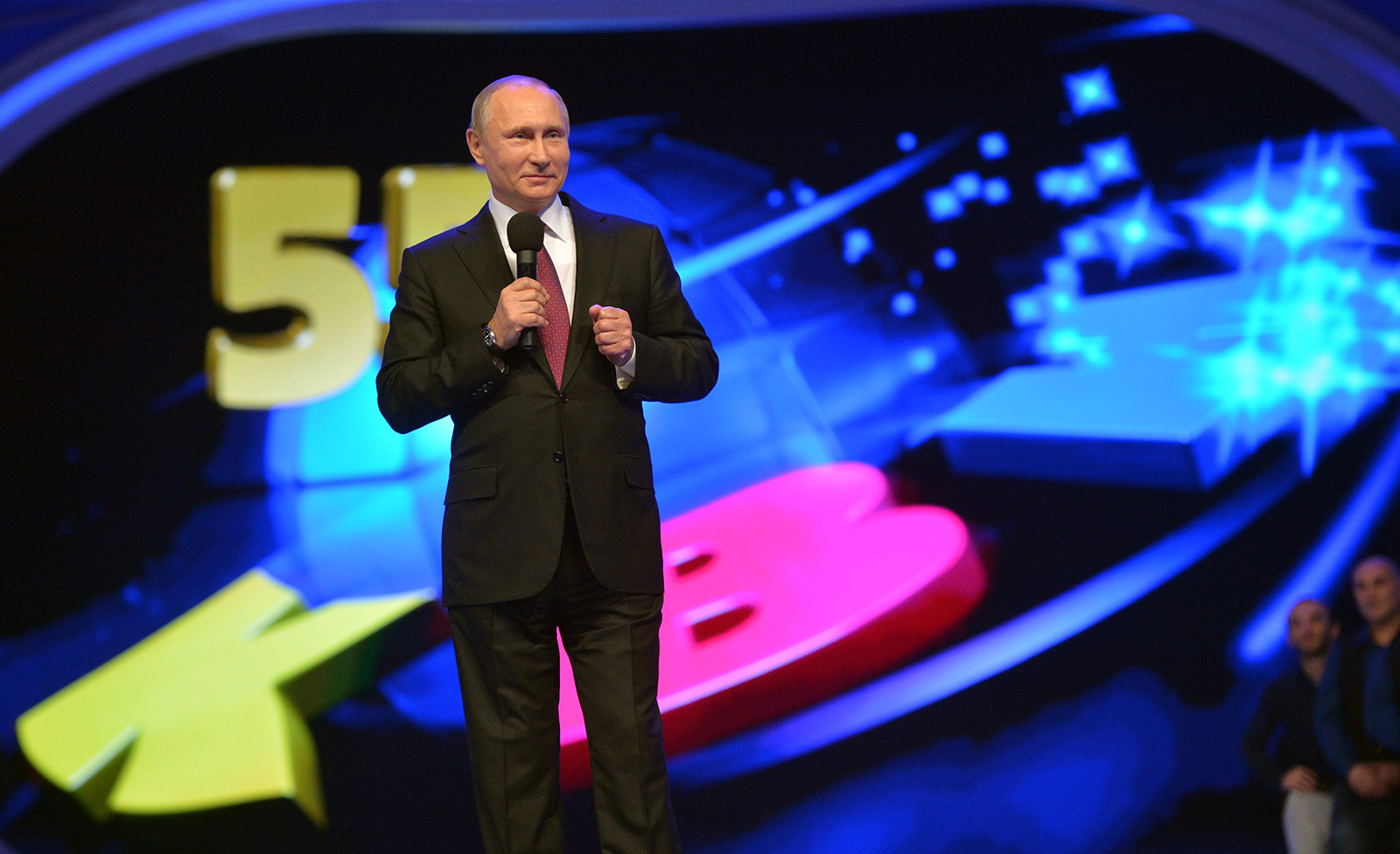 Vladimir Putin on the KVN stage in 2016.

Many who used to enjoy KVN criticize it now. “The TV version of KVN is made by those who don’t have a clue on how to make good television. You have to wait for eight minutes to hear a single joke! Old people can die during this time, which can be a better option compared to watching some modern KVN teams,” commented Denis Chuzhoy, yet another former KVN player and now a vlogger on Youtube.

But even those who hate today’s KVN admit that most people who somehow work with humor in Russia started their careers in it. As Semyon Slepakov, a successful producer and a musician writing ironic songs about Russian reality, said, “Those who played KVN are used to making up jokes anytime, anywhere, often in terrible conditions when they have no money.” That’s useful in the merciless world of show business.

KVN is alive and kicking, and in 2016, when the show celebrated its 55th birthday and Vladimir Putin came to say congratulations, the anniversary concert scored first in the  TV ratings throughout the entire year. Maslyakov is sure: “In Russia, everything is possible, but the disappearance of KVN? No, that’s delirious.”