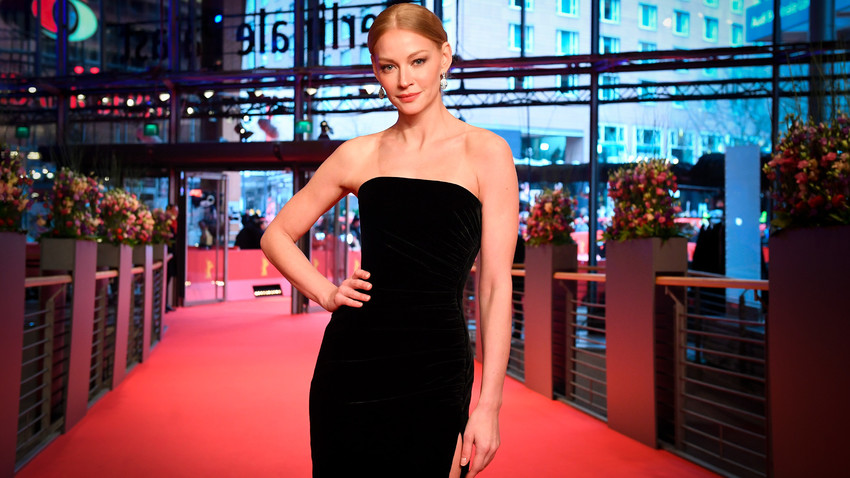 Ekaterina Chesnokova/Sputnik
These movie stars show through their own experiences how to accept yourself, the importance of transcending your image or how, on the contrary, your image can serve as a source of inspiration.

Ustinova became an actress by accident. In 2005, while a student at the Finance Academy in Moscow, she was approached on the metro and offered a part in a music video for a Russian hip-hop group. After that, she appeared in a video for famous Russian rapper Detsl. From there, the offers for roles in movies began rolling in.

She is now 36 and, in addition to acting, has also worked as a producer (she co-produced Kirill Serebrennikov's film The Student, which won a prize at Cannes) and has made a theater career for herself on the side.

Her Instagram profile is filled with photo shoots for glossy magazines and photos taken backstage after filming and during her travels.

"People often write to me saying that I am an example of how a young woman can come from a small town and achieve success through her own efforts," Ustinova once said. She grew up in the tiny town of Severodvinsk (1,300 km north of Moscow).

She can't imagine her life without meditation and Jivamukti Yoga. She tried out vegetarianism but gave it up, believing instead that "the best diet is to listen to your body."

Another actress with an Instagram that looks like a glossy magazine. She was featured alongside Svetlana Ustinova in the crime comedy Blockbuster.

Prior to this, Chipovskaya became popular throughout Russia for her role in The Thaw, a TV series about life in the Soviet Union during Nikita Khrushchev’s rule.

In addition to film and theater, the 31-year-old Anna can sing rather well. She enjoys going out to Moscow’s clubs and knows the value of taking pleasure in life: "I am an absolute hedonist. I work a lot, read and watch movies, so why not hang out sometimes?"

On her Instagram there are few traces of a glamorous lifestyle. Instead, there are many photos of her looking relaxed and natural, accompanied by messages about how to enjoy the most innocent moments that are present in all our lives.

30-year-old Irina Gorbacheva became one of the most recognizable faces in Russian cinema after her role in Boris Khlebnikov’s film Arrhythmia. Prior to that, she was primarily known and adored by her Instagram followers for posting funny and daring video sketches.

Gorbacheva is ready to endlessly ridicule and debunk the glamorous image of girls with false eyelashes and Botoxed lips. She often posts photos of herself without makeup and experimental images on Instagram.

In 2016 she won GQ Russia’s Woman of the Year award. Two years later, she received wide accolade throughout Russia, winning the Golden Eagle and Nika for best leading actress and, in the process, proving that a good comedian can play tragic roles. "What I do involves a bit of clowning. And a clown is always a tragicomic artist," she told GQ magazine.

At 36, this actress already has 16 years of acting experience and over 60 roles behind her. After conquering the Russian cinema world at lightning speed, she began attracted the attention of Hollywood directors.

One of her most memorable roles was that of Viper in Wolverine with Hugh Jackman. Nowadays, she is arguably the most popular Russian actress among foreign directors, having played roles in Italian, British and Russian-American movies.

It is interesting to follow her changing image in film and theater—a process that is on display on her Instagram. But the opposite is true about her private life. She doesn't like an overly glamorous lifestyle and values friendship and "simple pleasures," such as getting up late on weekends, going to the country with friends or playing badminton. Hers is a very honest Instagram, without the excessive gloss and grandstanding of many big stars.

The main diva of Russian cinema, 52-year-old Renata Litvinova has been and remains an example of femininity and grace, and this is on full display on her Instagram. She always looks as if she has just stepped out of an old black and white film.

"You can use images to put up defenses against the world,” Litvinova once said. “I even think I have to do it, otherwise I would be destroyed by presenting the real me."

She has many different images, which is one thing designer brands like about her and part of why they want her to represent their products. In 2018, Christian Dior signed a contract with Renata to create a branded perfume.