How Muscovites commute to work 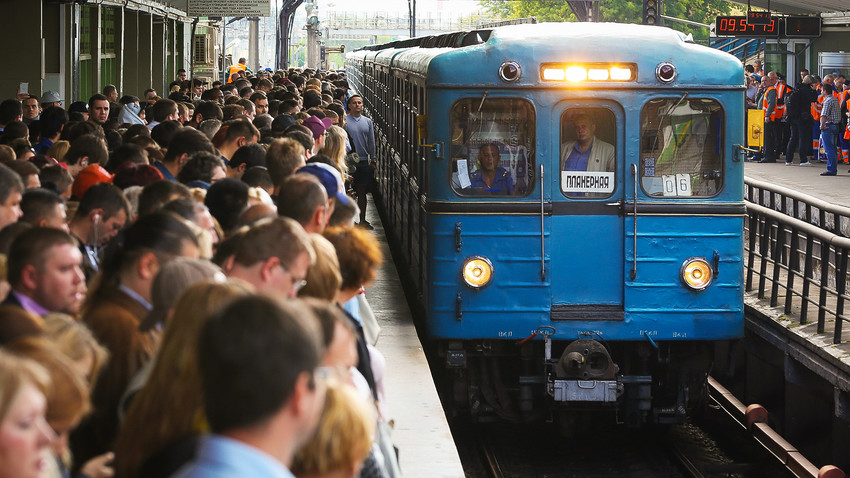 Artyom Karataev/TASS
With over 12 million citizens, Moscow is considered Europe’s largest city, and for the citizens of Moscow the commute to work is often an adventure - and not always a pleasant one.

How much time do you spend in total on your everyday commute? For some Muscovites, four hours a day is the norm. And mind you, that’s for people living in Moscow! For those living in the suburbs, it can be much, much more.

Not a minute left behind 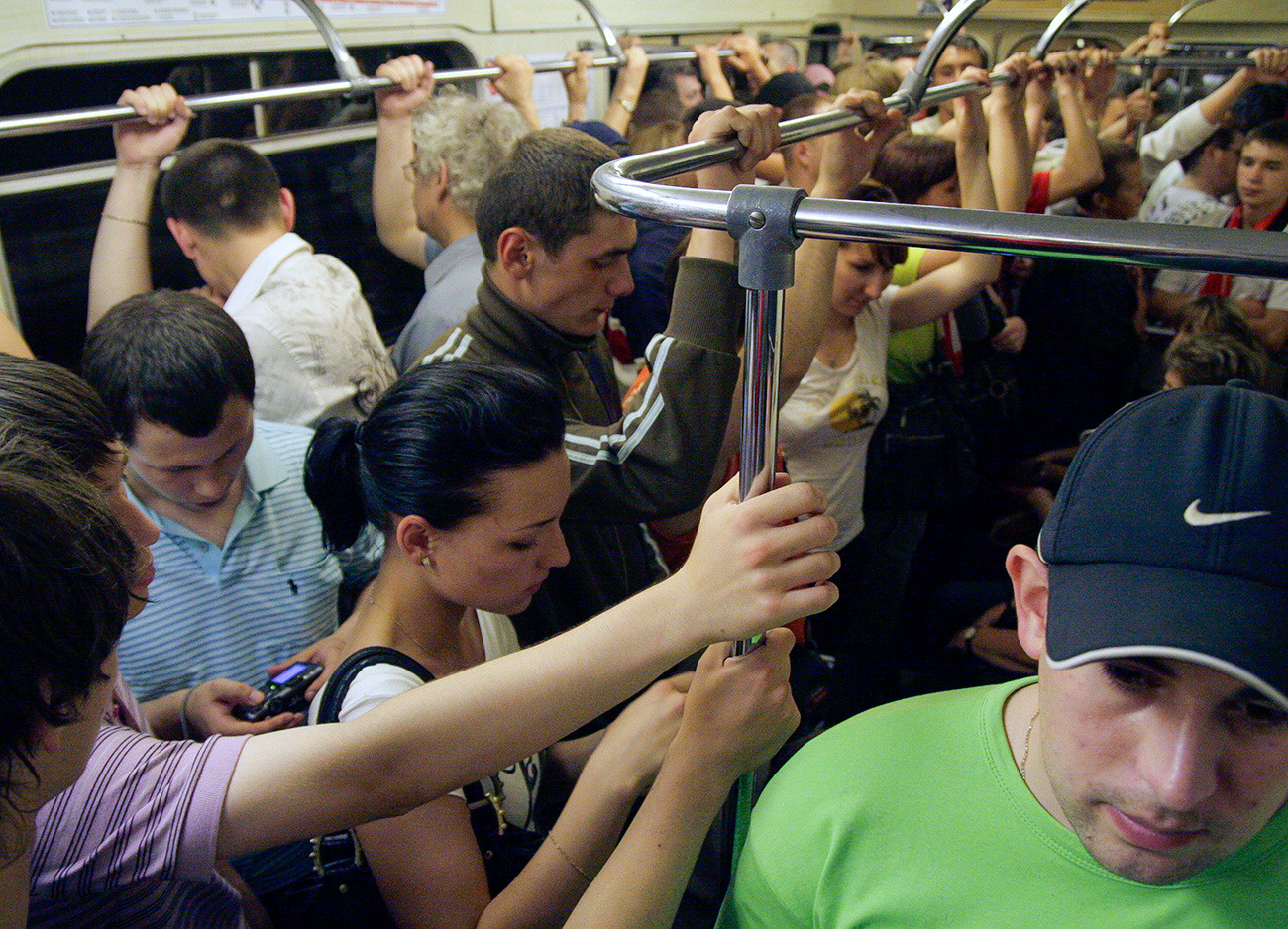 It’s usually eight o’clock in the morning when I leave for work. My commute often goes like this: a 7-minute walk to the bus stop, 5 to 10 minutes by bus to the metro, a half-an-hour ride with one change, followed by a 1-minute stroll and I’m at the door of my office. I live in Izmaylovo, the closest of all ‘edge boroughs’ (ie. boroughs along Moscow’s borders) to the city center  – that’s why the middle-class often rent and buy flats there. And that has made the borough a living hell for drivers – getting to the center by car from Izmaylovo will take you at least 2 hours and is a total nightmare. But then again, if you have to get to your office by 9 in the morning – as most Muscovites have to – head for the Moscow Metro! But be ready for a Japanese-style commute! You’ll be stuffed somewhere between an overweight, middle-aged man sweating like it’s Doomsday and some girl with long, frizzy hair waving right into your nose. You may even faint right there in the subway car from lack of room/oxygen, but you won’t fall – there’s no space to!

There are over 12 million people in Moscow, and over 7 million of them (link in Russian) are economically active. But that’s not all. As the Higher School of Economics states, about 0.9 - 1.2 million travel to and from Moscow every day, with 22-30 age group doing the longest routes of all. As the authors state, Moscow “pulls in” people from areas up to 50 kilometers away. So, we’re dealing with several million commuters! For example, about 9 million people use the Moscow Metro every day. That’s why it has to run like clockwork – it’s calculated that even a 10-second delay of a metro train quickly multiplies and usually leads to a 5-minute delay by the time the train reaches the end of the line.

Daria Fedorova, 24, who lives in Domodedovo, a town just outside of Moscow, says it takes her 4+ hours a day to and from work using her car – but if she took public transport, it would be roughly the same. The difference is on public transport, you can at least read or listen to podcasts. Darya admits she can do her makeup or try to learn Spanish while driving her car. Often, such distractions lead to minor traffic accidents that further exacerbate the traffic jams, and the road becomes longer for everybody. 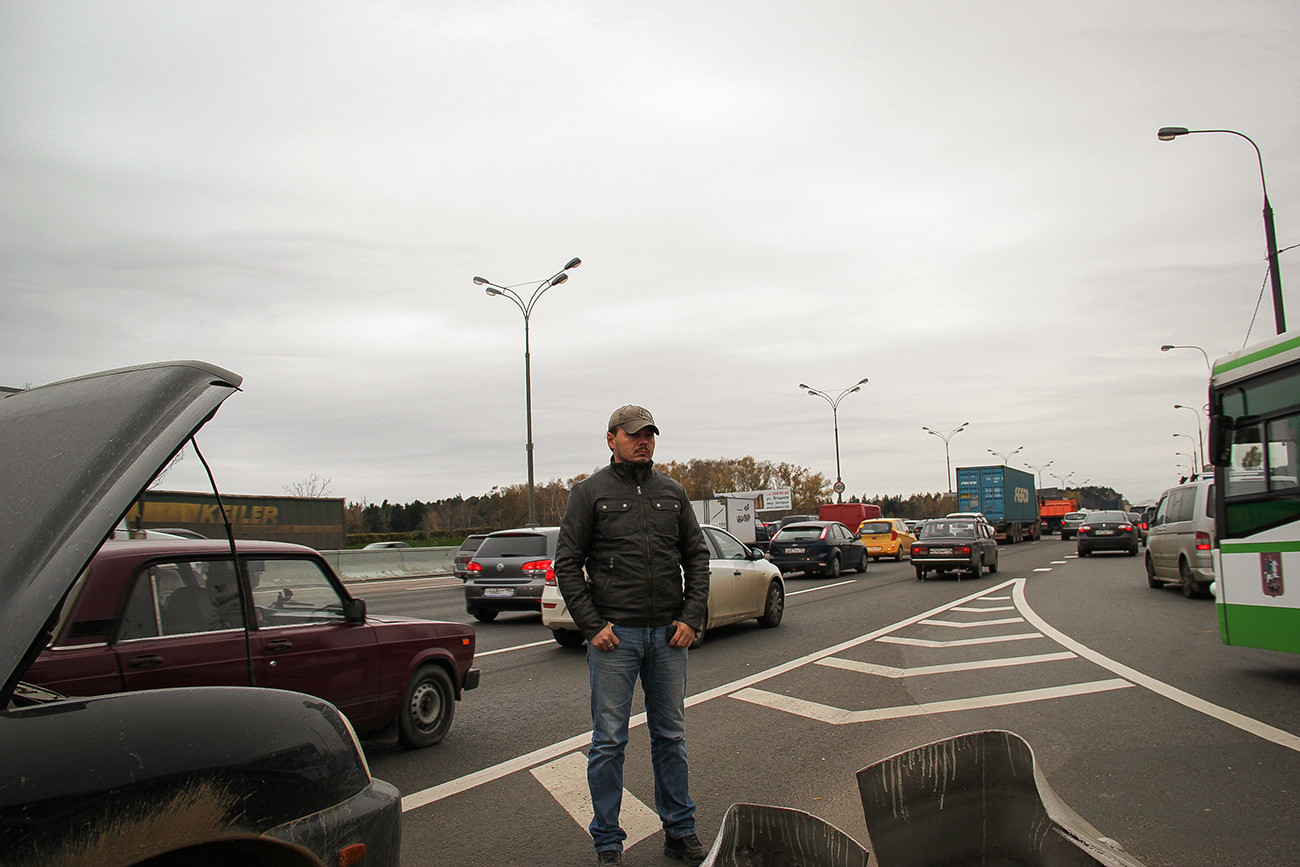 Dmitry, the "Santa from Butovo", standing near his Hyundai Santa Fe 'defending' the bus lane.

A few years ago, Dmitry, a man living in Moscow’s southern Butovo district and driving a Hyundai Santa Fe became famous as ‘Santa from Butovo’ because every morning he would block access to the public transport lane with his car – so that not-so-law-obedient drivers wouldn’t cheat and occupy it, thereby blocking the way for buses. This one decision made Dmitry a local hero because he helped a lot of people get to work faster. Yes, he was, in a way, wasting his time standing there parked – but then again, he was also used to standing in traffic jams with everybody else anyway!

Elena, 35, who lives in the suburb Moscow town of Lytkarino, chooses to work from home. She is a single mother screenwriter raising her son and she says it’s an everyday feat getting to Moscow. “There’s no suburban train station. There’s a 5-kilometer road through the forest that has just two lanes, and on weekday mornings, there’s a constant traffic jam. The road that normally takes 20 minutes turns into 2 hours in that traffic!” Elena complains, “and when you get to the highway that leads to the city, it may as well be another 2 hours – if there’s a traffic accident or road works. Now, they made a new road that does make the trip shorter. But it’s summer, the dacha season, and it’s still hard to get back to Lytkarino on a Friday evening – the dacha people are getting out of the city in droves and it still takes about an hour to get home!” 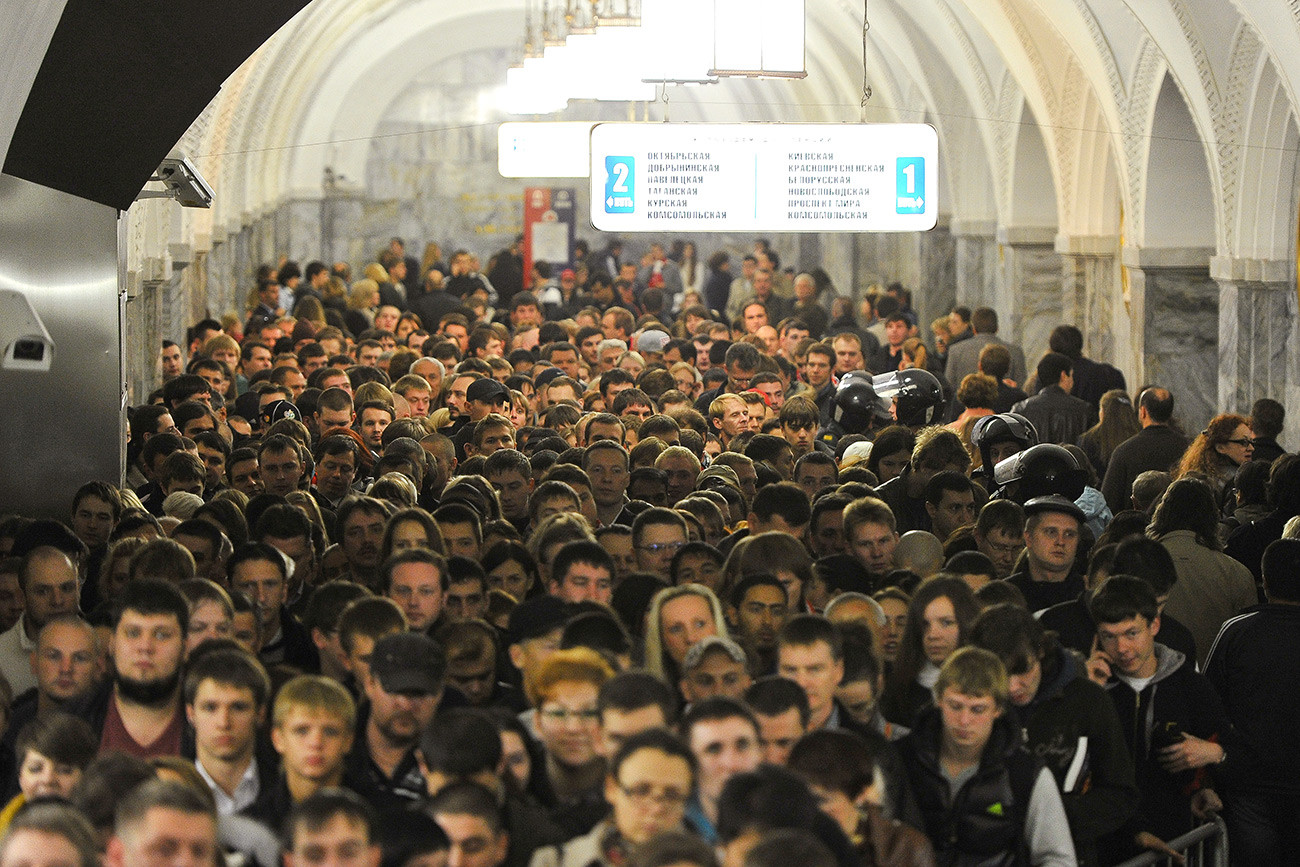 Another significant cause of Moscow’s traffic jams are parents driving their kids to school. Back in Soviet times, it was unheard of. “In my generation, no one ever took their kids to or from school,” says Tatyana, 61. “Yes, we knew there were exhibitionists and kidnappers, but Moscow was still considered very safe. So kids would usually just made arrangements to go to school in groups. I took a bus for 1 stop and then walked for a kilometer to get to school, and the same on my way home. Only once, when there was a huge snowstorm, my grandmother came to the bus stop with a shawl and warm valenki (warm boots). Normally, parents were always working, so nobody could really take us to school. We were used to getting there and back on our own. But when I was raising my kids in 1980-1990s, our districts had become more dangerous, so we got used to taking our kids to school.” 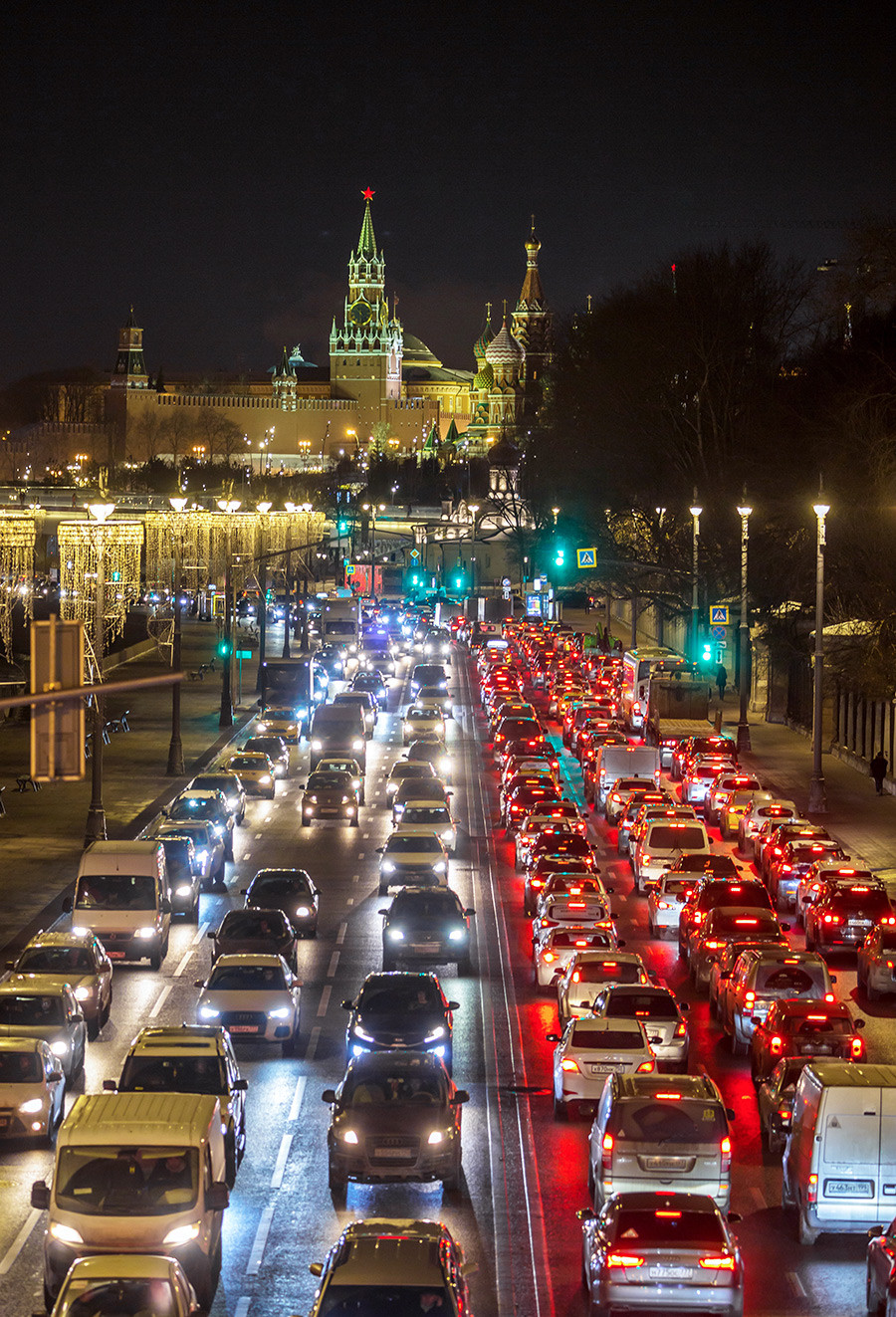 By the end of the 2000s, Moscow had developed a transport problem that demanded immediate action. Since 2010, the Moscow Metro has expanded significantly, adding over 60 new stations. Also, the Moscow Central Circle, a metropolitan rail line encircling the city, opened in 2016. By 2023, officials promise another 55 metro stations will have been opened.

In general, Moscow’s public transport has taken a giant leap forward – even a local who spent a year in New York was fascinated at how quickly the city was changing. However, all this does not solve the Moscow commute problem, it only serves to kick the proverbial can further down the road. 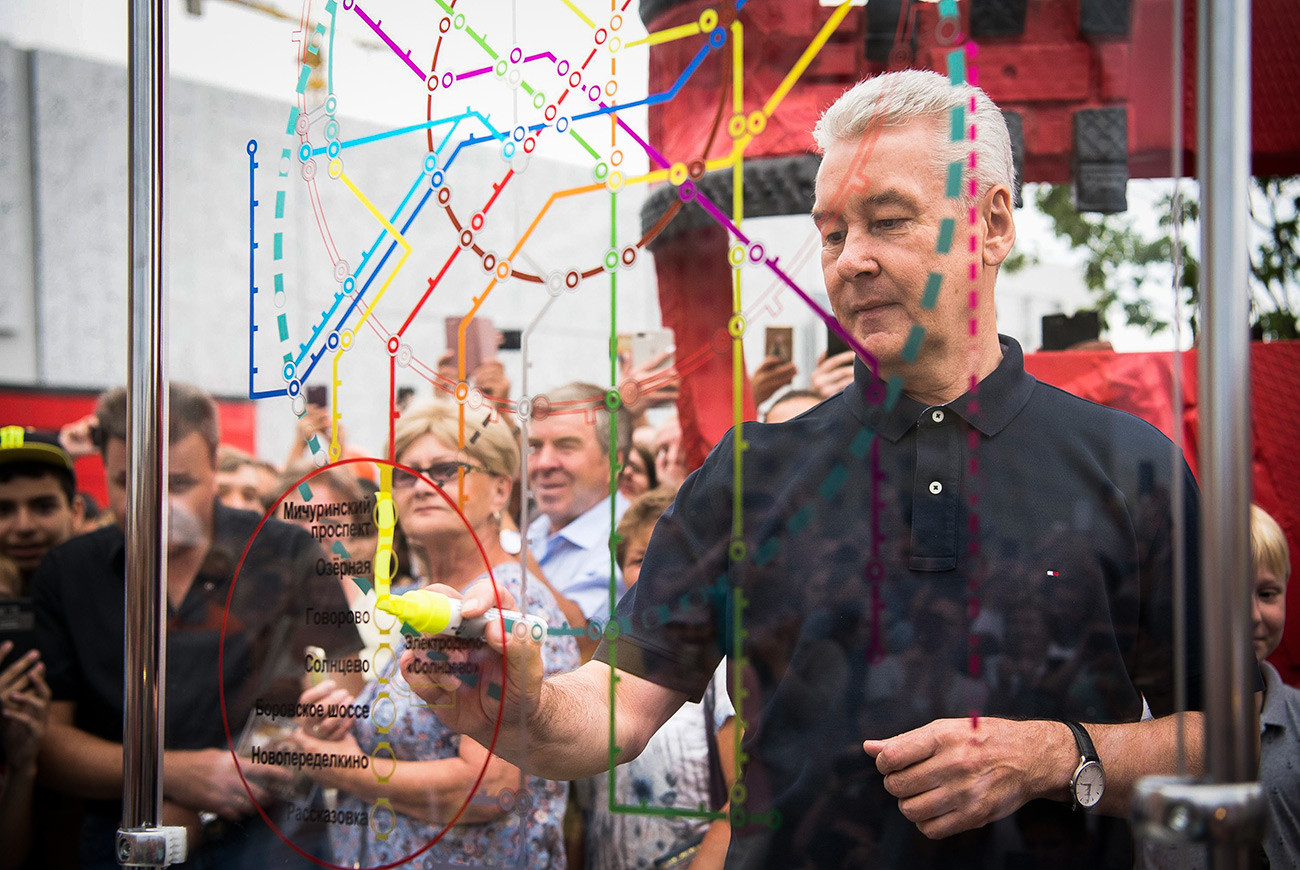 Sergey Sobyanin, the Mayor of Moscow, connecting the dots – he's drawing a line showing an additional part of one of Moscow Metro lines.

This winter, maintenance work was held on several lines of the Moscow Metro. For many days, trains were replaced with buses, which caused mayhem along every single line that was in repair. Thank goodness they were renovating them one by one, and not simultaneously! In my home district, construction of municipal houses is underway, which means - more people and more cars!

It’s been 3 years since I sold my car and a year since I stopped taking buses to my metro station; they’re so crowded you can’t always get in these days. Instead, I now proudly take a daily 15-minute walk - it’s more healthy!