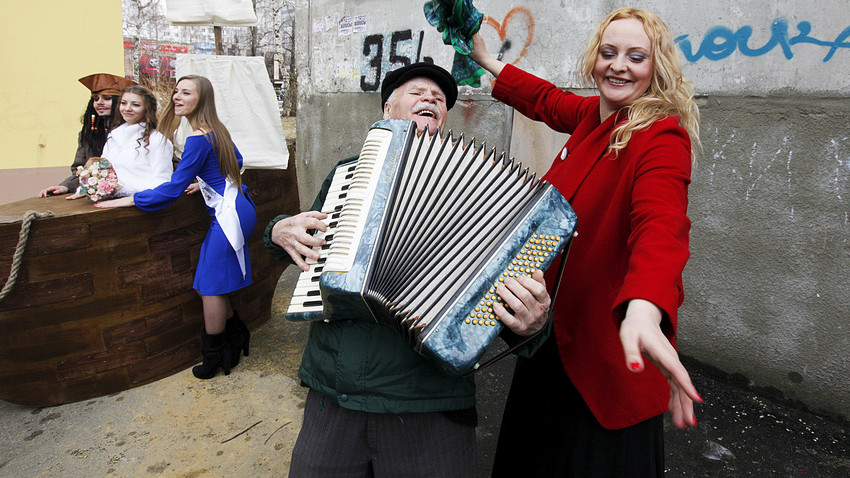 Krasitsky from Russia, dressed as movie character Captain Jack Sparrow, and his bride pose for a photo as guests celebrate during their wedding ceremony in Stavropol

Reuters
So you thought all Russians were clinically insane? How dare you. This article will certainly set the record straight. Then again…

The men and women are divided into two teams. The former are musicians, the latter their musical instruments.

The men pretend to “play” the woman. For example, a popular Russian instrument is the accordion. For this, the woman kneels down next to the man, and he squeezes and unsqueezes her like a pair of bellows.

In the case of the guitar, it gets more interesting. The chords are the chest area, and the strings... see for yourself. As for the drums, you might be tempted to call the police. Good fun though. Honest.

The guests are divided into two teams and form two rows, preferably in a boy-girl sequence. The task is to transfer a sausage-shaped balloon to one’s neighbor without dropping it — hands-free.

To start with, the first player clamps the balloon between their knees and passes it to their neighbor. When it reaches the last in line, the rules change slightly — now the women pass the balloon facing the man, but he passes it to the neighboring lady with her back turned to him.

Next, the men hold the balloon between their knees, and the woman transfers it to her neighbour with her teeth, making sure not to burst it.

The first team to finish with sausage intact wins.

The men play the role of fir trees, the women — squirrels. There is one less “fir tree” than “squirrels.” While the music plays, the squirrels dance around the fir trees. But when it stops, the squirrels jump on the trees. Squirrels that don’t manage to climb a tree are out of the game, and take a man with them. The mayhem continues until only one tree-squirrel pair remains.

The rules couldn’t be simpler. The man stands on a chair, and the woman rolls an egg up one trouser leg and down the other. The reverse is also possible, where the man rolls an egg from one sleeve of the woman’s dress to another.

Boiled eggs are used these days. They used to be rolled (and often dropped) raw.

The woman puts a (preferably flesh-colored) stocking over the man’s head. To musical accompaniment, she slowly tries to pull it off. What comes of it, see for yourself.

“I’ll show you what these men will look like on the third day after the wedding,” the host explains the point of the game.

One of the most POPular (ouch) Russian wedding games. The woman holds onto a chair, while the man tries to burst a balloon against her from behind, again without hands.