Russian girls take classes on seducing foreigners - and I went! 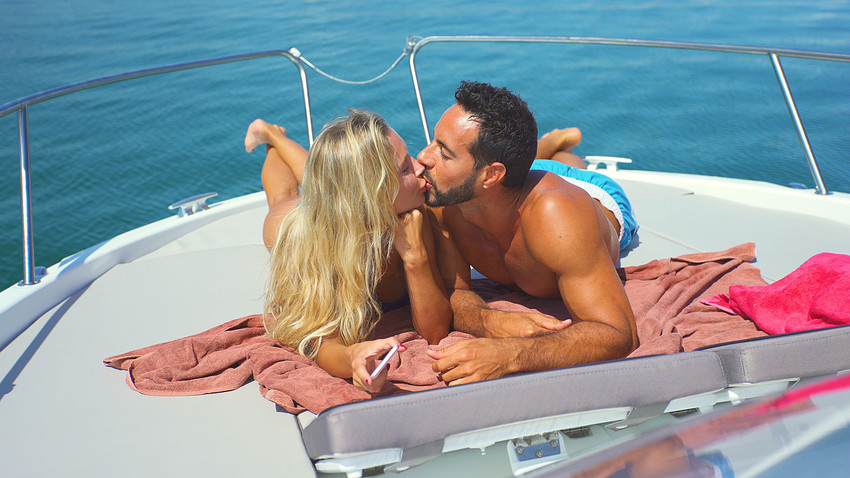 Getty Images
Fancy the look of a Russian woman on a dating site? The chat’s going well and it seems she’s hooked, lined, and sinkered? Get real. It’s more likely she’s stalking her prey, waiting for the kill. At least there are plenty of courses in Russia teaching just that.

The cheap plastic chairs, bookshelf, and small wardrobe contrast sharply with the high ceilings and sparkling chandelier. A pleasant-looking buxom brunette diligently writes something on the sheet of paper resting on her lap. The other participants — a woman in a red jacket with a rigid bob cut, a striking slender blonde with a ragged hairstyle, a woman of schoolgirl appearance, and a curly-headed young guy — do the same.

“Sveta, what have you got?” asks the blonde of about 40, sitting across from the other four. Meet Irina Emelyanova, the course leader. She describes herself as an all-in-one married mother of two, certified psychologist, hypnotherapist, and energy therapist. 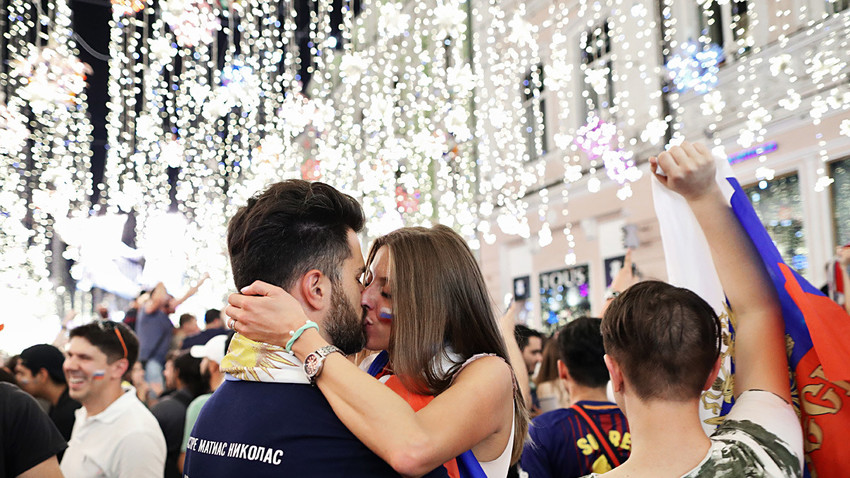 The first task for the trainees is to write down their goals as if they’ve already been achieved.

“Well, I got rid of my debts, improved my relationship with my children, found a husband...,” the brunette answers timidly, reading from the sheet.

“No, not like that! Write: I’m free, independent, and have the love of my life! That’s the message you need to take home. Stuff debts!” the blonde dishes out a ticking-off.

The other participants also begin to cross out things on their sheets.

This course in how to seduce men (including foreigners), one of many available, is held in a small office building in central Moscow. The first lesson is free, after which each themed class costs 7,200 rubles ($110).

Imagine you’re flipping through the profile of a Russian girl in Tinder. Blonde, blue eyes, likes traveling, seemingly caring and affectionate, loves cooking. Do you think she’s genuine? Perhaps. But keep in mind that she might not have created the profile herself.

Although the stereotypical “Russian mail-order bride” desperate to bag a foreign husband is gradually receding into the past, special online courses on how to fill out profiles on dating sites and chat with foreigners still exist.

The founder of one such course, Rina Piantanida, who married a Greek, offers a series of YouTube videos on how to “win” a foreign man. The main audience is women on the wrong side of 30. 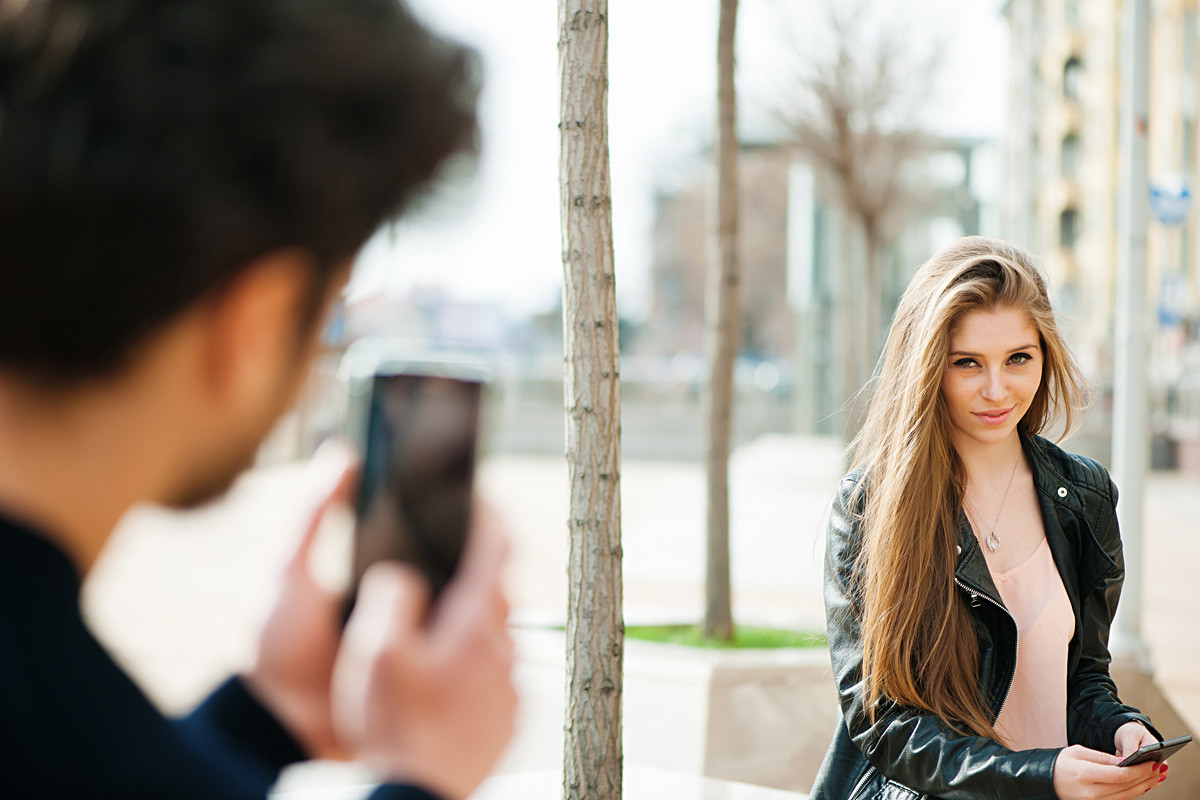 “Tell him you want to love and be loved,” she instructs in one of her tutorials. “A simple, normal woman is what foreign men want. Forget being special, they need that like a hole in the head.”

She advises never to write a foreigner that he “must” do or be something, because “they have a different mentality.” Appearing too self-sufficient or openly declaring that she’s looking for a rich man are also faux pas for a woman — he’ll run a mile. The best way to seduce a foreigner, according to Piantanida, is to show that you are tender, affectionate, and caring.

In addition, real Russian beauties can have individual profiles created for them by marriage agencies specializing in foreign husband-hunting. 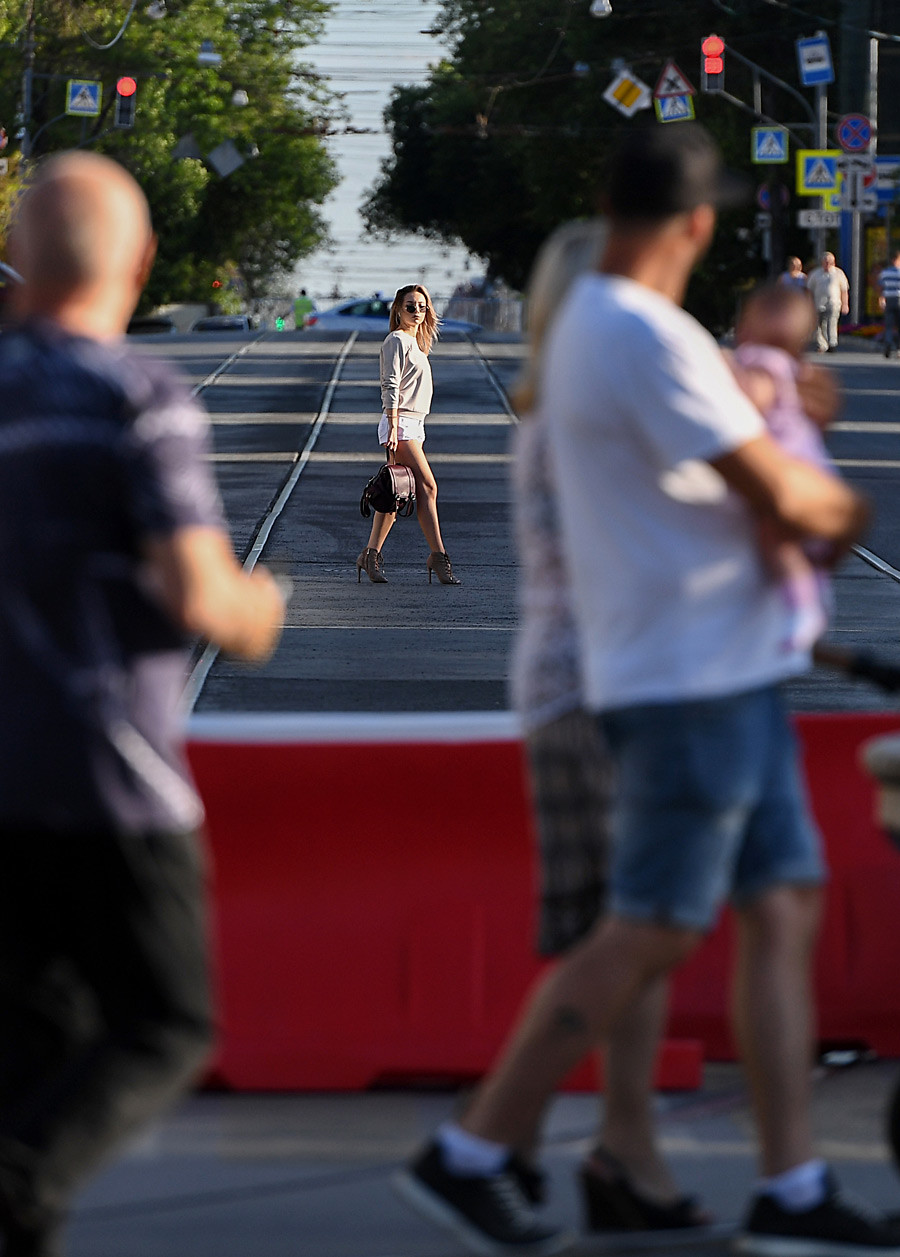 One of these agencies flamboyantly calls itself “an accelerator for women to meet foreigners.” Such “accelerator” courses not only teach how to communicate with men, but provide profiles of foreigners looking for a Russian woman. Both sides have to pay for the service; the amounts are not specified.

“We start with emoticons and light-hearted chit-chat. Financial problems, ex-husbands, illnesses, and politics are all out,” writes an accelerator trainer on Telegram. The ideal topics are “sport, travel, and photos of food and you in the park.”

Lastly, if really hungry, Russian women can scrape together a few hundred euros (the exact amount is unknown) and enroll on a course with Alex Leslie, one of the most famous sex coaches in Russia. He offers “individual training in Ibiza,” during which he promises to teach “huntresses” how to seduce top managers, famous musicians, photographers, and entrepreneurs (not necessarily foreigners).

“To make a foreign man earn money, you need to be burning with desire yourself and motivate him,” says Irina Emelyanova at her man-seduction training. In her opinion, there is no difference between men from Russia and other countries. She claims that mentality is purely a convention — in the end all men need the same thing.

The trainees, including the curly-haired guy, busily take notes, barely keeping up.

With foreigners, continues Irina, it’s also important to ask for help and generally be “weak.” A woman also shouldn’t nag a man or try too hard with the cleaning, so that he doesn’t take her for granted and learns to do his share of the chores.

The participants themselves admit that they want to marry a foreigner first and foremost to be rid of debts, work, and household duties. 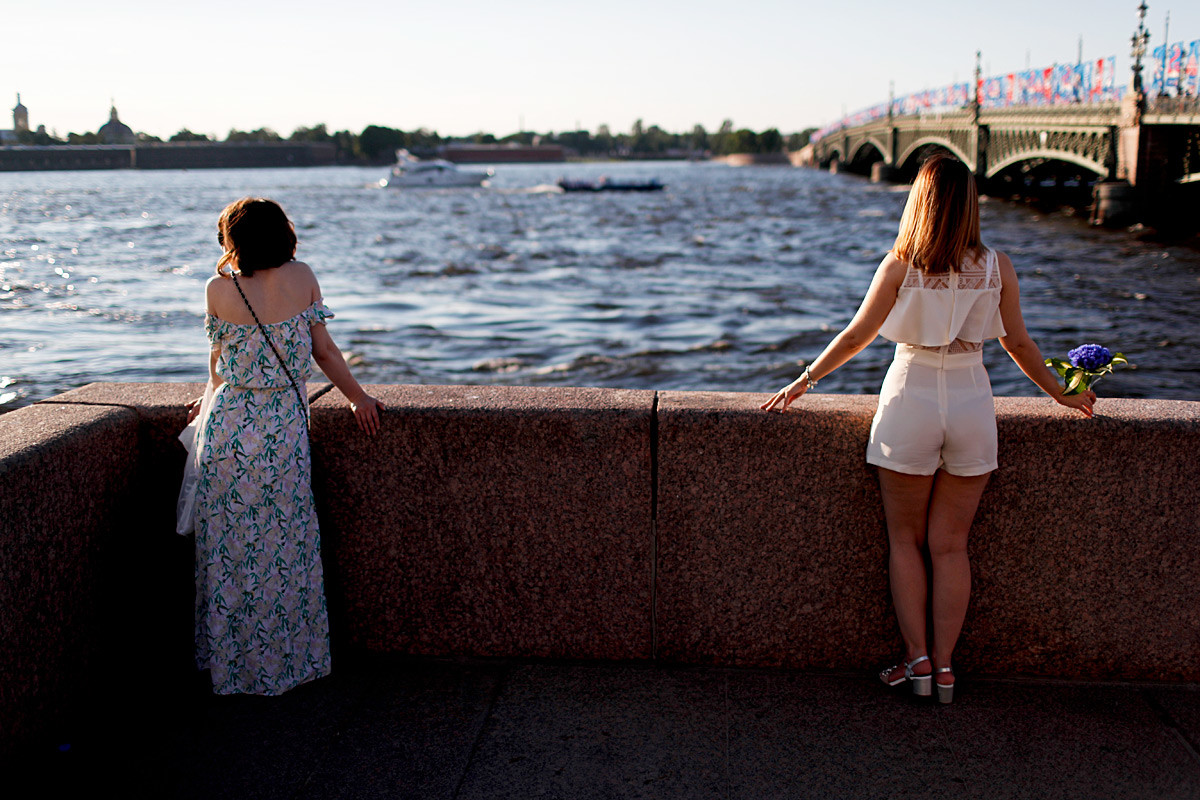 “I hardly have any time for myself. I’m tired. Work consumes all my energy. Plus all [Russian] men are greedy. Americans, however, are honest and sincere, they won’t be unfaithful,” the red-jacketed businesswoman lays out her reasons for taking the course.

The others nod sympathetically. Only Artem, the curly-haired student, is perplexed by it all.

“I don’t know about you, but I want to find one girl, a Russian. At least now I understand you a bit better. And her too,” he says, hinting at his reason for being there.

Russian women are primarily attracted by the supposed prospects and high standard of living in Europe and the US, says psychologist Irina Ryzhkova. Plus, her choice of suitors narrows with age.

“In the Russian marriage market, after 30 there are fewer free men, and more and more free ladies. Consequently, women look abroad,” Ryzhkova argues.

Moreover, many women have accumulated negative experience from past relationships, in which case she risks transferring the same problems to her relationship with a foreigner, multiplied by the difference in mentality, the psychologist explains.

“Foreigners are in no hurry to formalize a relationship, and Russian damsels often have to gamble on older men. But even they are not always ready to assume full financial responsibility for their fairer half, as many Russian women would like,” says Ryzhkova. 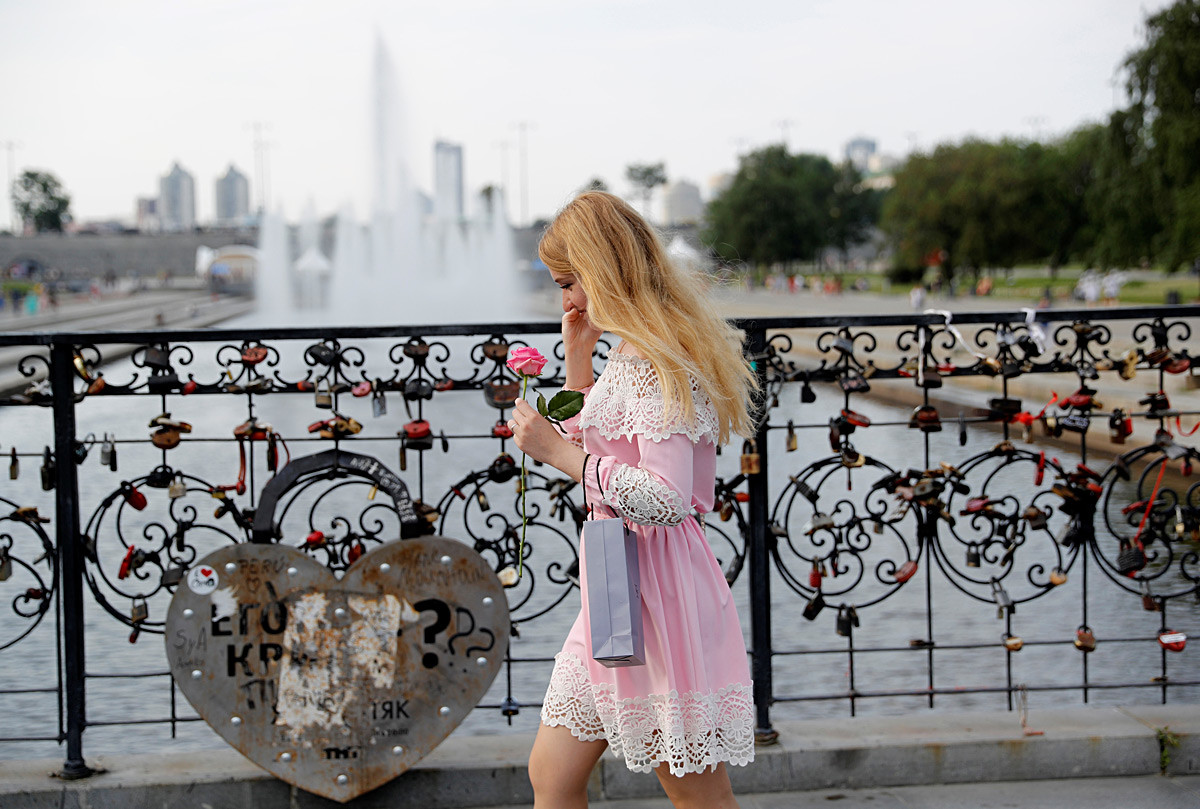 This doesn’t mean that foreign men should never consider marrying a Russian woman, she clarifies. The main thing is to make sure that her drive is not financially motivated, but rooted in feelings.

“Marriages of convenience happened centuries ago. The key element today is to have an honest, transparent relationship on terms acceptable to both partners. No relationship built on a lie can survive,” sums up Ryzhkova.