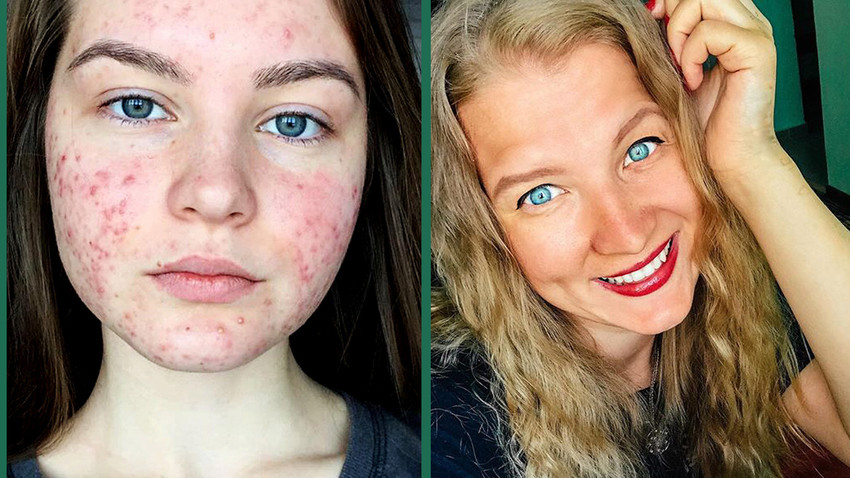 inna_nemi, sashaagb/Instagram
The hashtag #СоМнойВсеТак (“I’m fine the way I am”) has led to a new wave in online confessions about one’s body image, and the difficulties Russian girls have faced on the path to self-acceptance. These are their stories.

When Natalya Zemlyanukhina was just a child, she’d gotten into the habit of losing weight, just to get rid of a few kilos. The problem is she couldn’t stop. She was only 12. Having lost 21kg, she was diagnosed with anorexia. “I did lose the weight, but my butt was as flat as ever,” she said. A new idea had then begun to take root: gruelling gym sessions and healthy food. And that is how anorexia had turned into orthorexia - an obsession with eating healthy.

Nataylya is 16 now, and she’s “that popular girl” she’s always dreamed of becoming on Instagram, with 1.2 million subs, who know her as Tusya. She achieved her popularity from publicizing her battle with self-acceptance. She’s also behind the hashtag #СоМнойВсеТак , allowing thousands of young women to tell their own stories on the subject of changing oneself by wearing wigs, tons of makeup, removing birthmarks and suffering in the process - plenty of it. A lot of the subscribers use the hashtag to publish photos of the “real” them.

Anna Ivanova: “Going to school with a wig for the first time felt like being led to an execution”

“Those who know me often ask about my hair, where I dye it, how I managed to get that beautiful shade, that curl, and so on. I usually mutter back something about an acquaintance of mine that does it for me every two weeks,” she says.

“The biggest skeleton in my closet? It’s not my real hair. These are all wigs. I’ve been wearing them since age 14, when my hair started falling out. Within a month, the people around me had started to notice. ‘What’s that - a bald patch?’, a boy in my class once asked. That’s when I got my hair shaved off completely, and bought a wig.

I was diagnosed with alopecia - it’s when simply lose your hair. And to this day, no one knows the cause. There are plenty of health clinics these days, but Cheboksary back then wasn’t so lucky. It was like the end of the world for me. I thought that not a single guy would ever fall for me. My mother was afraid I might commit suicide.

My first day going to school in a wig felt like being led to an execution. I hated school… never stood with my back to people, or to bend my head… I’d almost stopped communicating with others. And then, little by little, the problem passed. But I never told anyone.

I’m so tired of being afraid! But I’m letting go of my fear now, and I’ll start by [looking my natural self] sometimes, and not somebody who’s eager to conform to society’s expectations.”

Sasha: “At some point you just stop looking at yourself in the mirror” 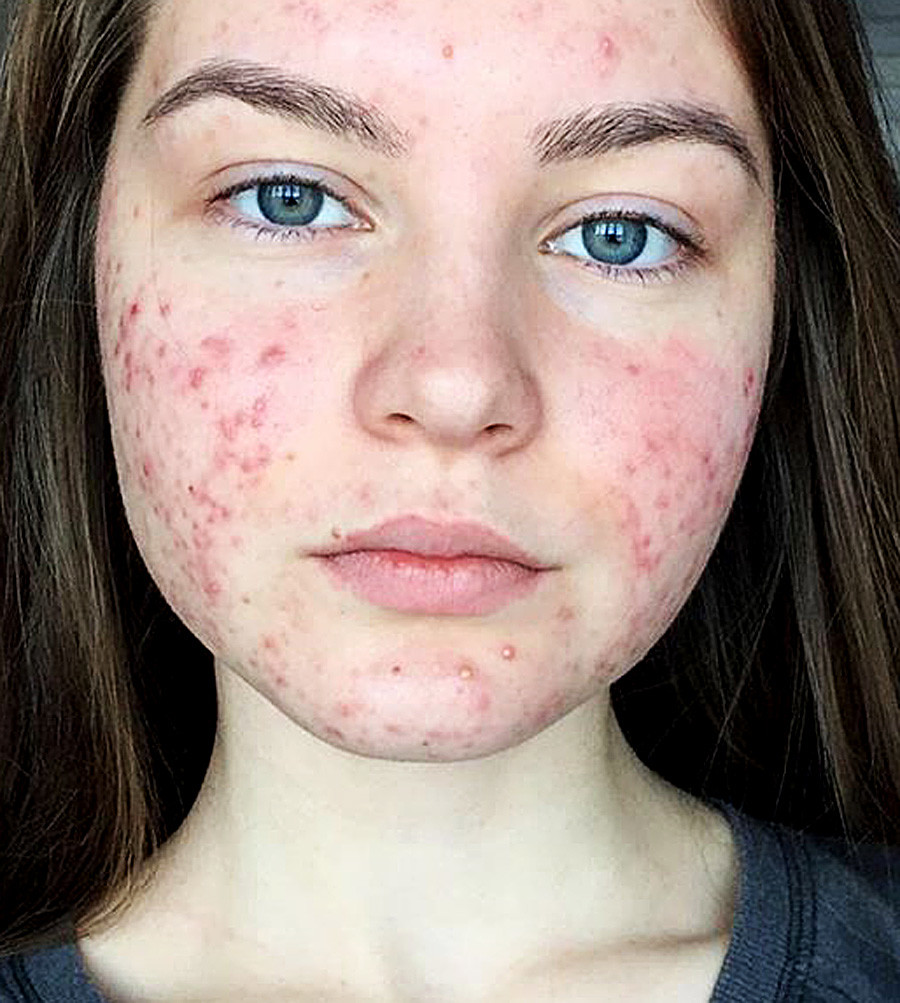 “It’s just teenage  acne, it’ll pass - they used to tell me. It’s not a huge concern, but you begin to use all manner of creams and other stuff your mom has,” Sasha says. “By 20, you’ve tried everything - from reducing harmful foods to every type of makeup in existence… it’s hard to hear people’s comments.

At some point, acne becomes this huge reason to stay at home. I’d started a three-month antibiotics course, and got the best skin I’d had in ages. You start doing selfies and videos. But sooner or later, the balance of bacteria in your body is restored, and you look worse than ever. At some point you just stop looking in the mirror, or even put makeup on, as it doesn’t help.

Then you find this ‘acne sufferer’ community on Instagram, and find out there are many others like you. But all the accounts are in English, for some reason. You can count the Russian ones on your fingers. You start having this constant internal battle, and you get angry at others for thinking they have the right to just dole out advice - probably things you’ve already tried. You also start accepting people’s feelings, understanding that they’ve been through something similar. And you finally end up in this culture where people are unafraid to talk about these things openly, you begin to feel like this is truly the 21st century - a time of monumental re-evaluations of thing. And you gradually grow stronger, finally being able to say ‘everything is fine with me.’”

“I was writing a post about how I don’t consider myself pretty, but don’t let it affect my self-esteem. A few weeks back I’d realized I was fooling myself, after hearing ‘super-lumpy’ being thrown at me online. I wept for 20 minutes straight.

I cried because I was hurt, and because I was angry at myself: ‘For crying out loud, I’m 36, happily married for 10, on my third child already, I do what fulfills me creatively, I’ve even got a school medal and an honorary red diploma lying around somewhere… why do I weep because of this one word directed at me by a complete stranger?!’

Because the moment this problem arose - and continues to this day - I still can’t accept myself… I see perfect people with perfect skin each day on television, in ads, movies and on posters…

You know, I hate fairy tales with princesses - they are always perfect. No flaws. And I have no recipe on how to start accepting myself. This post is just a tiny step in that direction.” 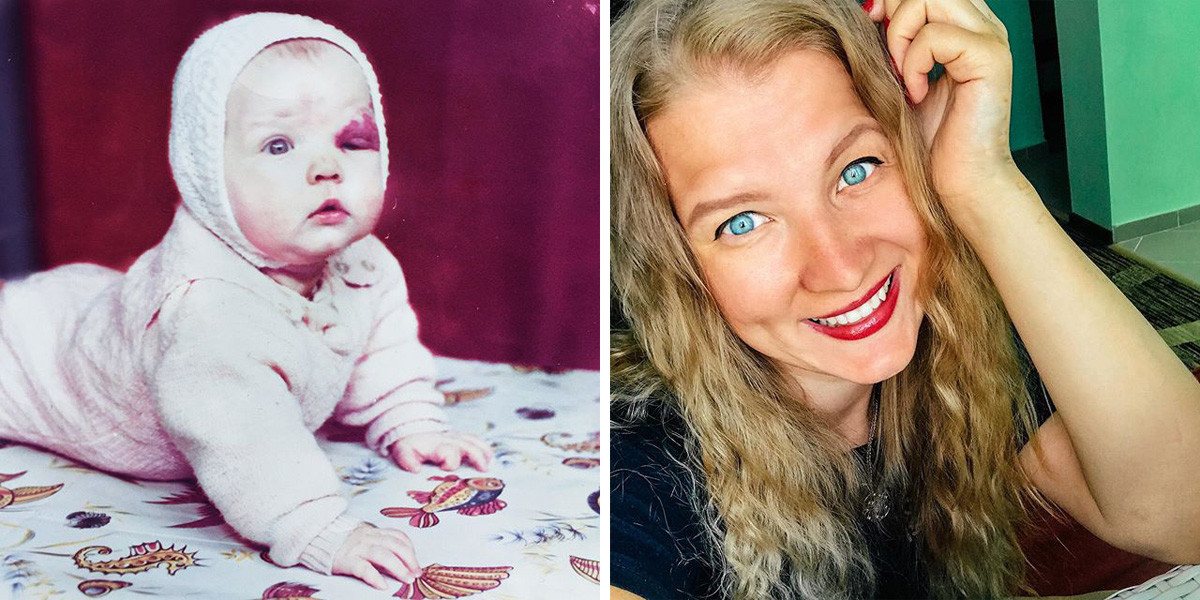 “My Instagram doesn’t contain a single child photo… because I was born that way. With a huge beet-colored spot over my eye. The scientific term is hemangioma. The eye had entirely been closed shut, the vision, obviously, at zero as well. Some call it a “kiss from an angel or a stork”. That’s some kiss, I tell you. At the hospital they told my mother to ‘leave this child, you don’t need her.’

It’s the 1990s. Constant flights to Moscow from two months old to three years. More than a dozen strong radioactive therapy sessions on the left eye. It’s scary to imagine what my parents must have gone through for me the signs of that sickness to have almost entirely disappeared - and for my vision to return to nearly 100 percent. There are, of course, traces of radiation therapy… there’s less hair on my left side, almost no eyebrows and no eyelashes, a bruise with no toning cream, my irises are a different color - you can definitely say I’m an exotic exhibit.

I was always embarrassed about my childhood photos, afraid of laughter and being teased at school and in kindergarten. I’m in awe of my parents, and any parents who’d had the courage not to abandon their children. You are all amazing and deserve the highest respect.”

“I remember all that hatred directed at me. Remember the words “Fat pig! Stop eating” every time I walk by the mirror!

Remember how, weighing 48-60 kgs I abstain from buying beautiful clothes. ‘I’ll buy once I slim down’ is what I tell myself. But the days just went on by… I remember going for the kind of men - not the kind that I want! But those that would stoop low enough to want me! I remember the discomfort of wearing a swimsuit.

All of this used to happen to this girl who worked out a lot, looked just fine and still hated herself! “Fat legs, hips and cheeks.” But all that is completely unimportant now!

Today, even having gained 20 more kilograms, I accept myself! You cannot love life and those in it, or find love… if you don’t love the one that matters the most! Yourself!”.