Why do even unbelievers in Russia baptize their children?

Orthodox priests baptize a child during a mass baptism ceremony marking the anniversary of the Christianisation of the country, which was then known as Kievan Rus’, in Stavropol, Russia, July 28 2019

Reuters
Nearly 90% of Orthodox Russians are baptized — yet the vast majority do so not of their own free will.

“Did you at least observe the fast before your last Communion?” 24-year-old Ekaterina is asked by a pudgy, probing clergyman. The woman gives a slight shudder — she has never felt comfortable inside a church. In her opinion, nearly all of them exude “evil energy.”

“I don’t observe the fast, but I lead a healthy lifestyle. I last took Communion 7-8 years ago,” she replies, silencing over the fact that her father made her go to church. Not to mention her atheist inclinations.

“In that case, how can you be a good mother to your child?” exclaims the clergyman.

“I love him and I’ll protect him from all troubles,” says Ekaterina, her blood beginning to boil. 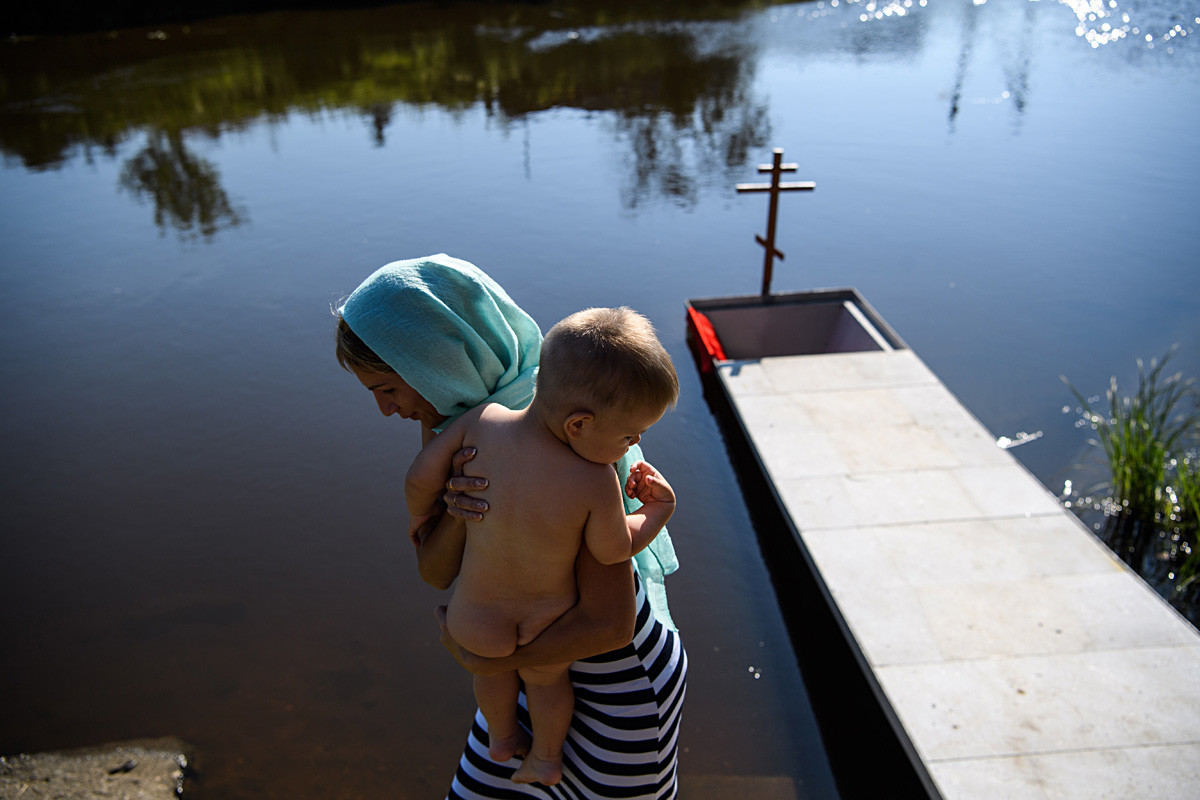 The priest rolls his eyes as if bored from hearing such phrases almost daily. Stone-faced, he takes a Sacrament of Baptism consultation form and, having filled out the blank fields, hands it to the young woman.

Her daughter’s baptism takes place a week later. Ekaterina describes it as a “tedious, pointless event.”

“Plus it costs 3,500 rubles ($55), it would be better to buy more baby clothes with that,” she reasons. After her own baptism, she never became a believer, and relations with her parents only worsened.

In Russia, 86% of Orthodox Christians have been baptized. Of these, 66% did so at the behest of parents or relatives, and only 20% at their own initiative, according to the All-Russian Public Opinion Research Center.

No one to light a candle for

“I was forcibly baptized at the age of 13. My grandmother was a believer and really wanted it. I laid out my conditions: no brainwashing or Bible-reading, otherwise the deal’s off,” recalls Lyudmila, a 43-year-old resident of Yaroslavl.

She says she found the anointing ritual repugnant, and afterwards “rushed off to have a wash.” The story repeated itself when Lyudmila gave birth to a child with a disability (she preferred not to name the diagnosis).

“My mother really wanted to pray for her and lit candles in church, she suddenly became very devout. She said she couldn’t pray for an unbaptized granddaughter. I agreed on condition that she wouldn’t force anything on her,” she says.

The child’s rehabilitation took ten years. In Lyudmila’s opinion, prayers and candles had nothing to do with it. 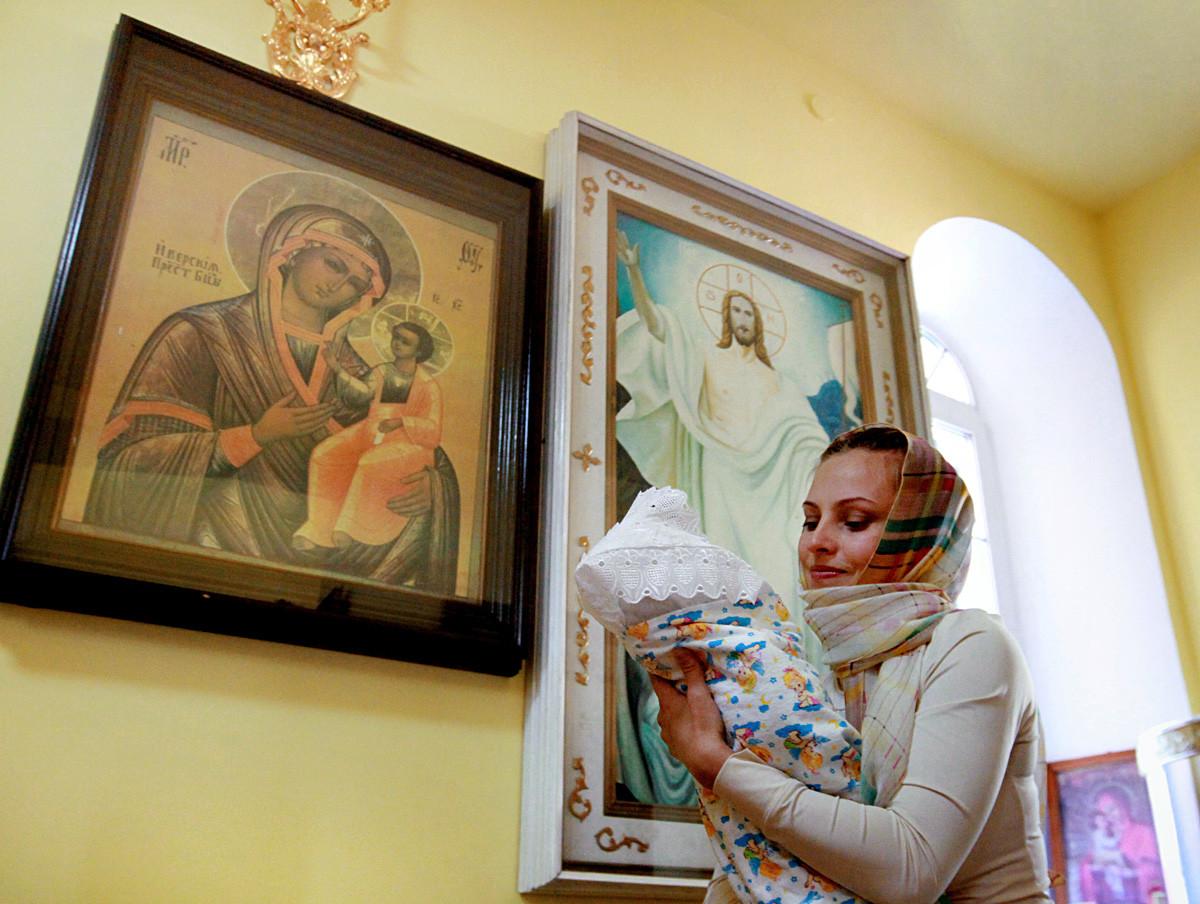 Woman holds child during infant baptizing rite at the Church of St. Nicholas the Wonderworker in Vladivostok

“Yes, I pleased my relatives. But their decision totally killed off any possibility of self-development in this regard. On a subconscious level the church is associated with coercion and something senseless, stinky, and sticky,” she argues.

Other women willing to be interviewed take a much lighter view of baptism.

“It’s not a tattoo, it leaves no mark or obligation to do anything. It’s like a child’s first birthday — they don’t understand anything, you just dress them up, invite relatives, and have fun. We had nothing to do with the church, and still don’t,” Sofia admits.

Fear for one’s child and belief in angels

The Russian Orthodox Church does not deny that for some parents baptism is purely a formality, says Hieromonk Alexander Mitrofanov.

“That’s why baptism consultations are now held with the parents and godparents in advance. But it’s quite logical for one of the parents to be a believer, and the other to at least not be opposed. That’s actually why godparents are needed, as people who commit themselves before God to help in the Orthodox upbringing of the child,” Mitrofanov explains.

Although the USSR prided itself as having the best education system in the world, huge masses of people were and remain uneducated in religion, asserts psychologist and psychotherapist Andrei Efremov. 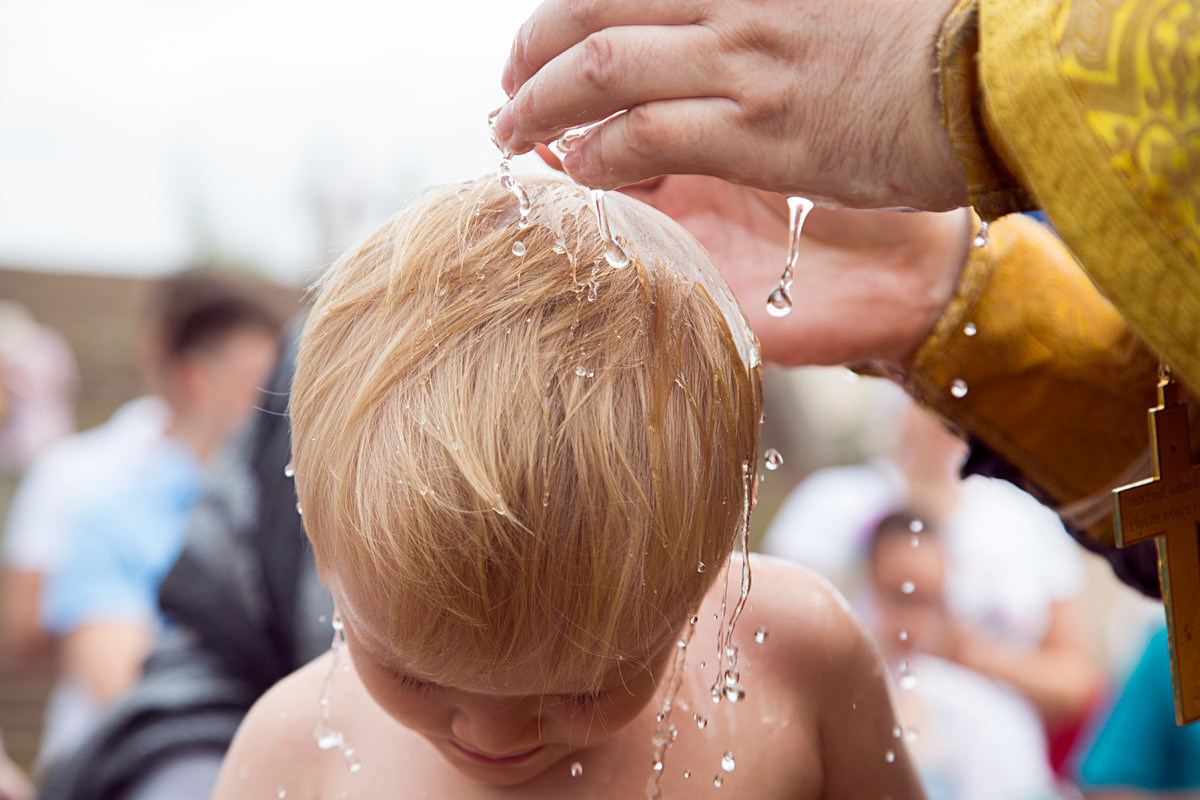 A little participant of the mass baptism ceremony

“The less educated a person is, the more they are psychologically exposed to their inner fears. For them, the entire world around is a constant source of danger. Since such fears are imaginary, the remedies too are imaginary. When non-believing parents baptize their child, the baptism is illusory,” explains Efremov.

Such baptism is a type of psychological violence, says the psychologist, and could lead to family problems down the line.

“In Russia, being Orthodox means being a ‘real Russian.’ That is, Orthodoxy suggests an ethno-religious affiliation,” Tatyana Koval, doctor of historical sciences and professor at the Faculty of World Economy and International Affairs of the Higher School of Economics in Moscow, is sure. Orthodoxy also conforms to the ideological and political principles of the ruling powers.

“It’s worth pointing out that of those who call themselves Orthodox, only 58% believe in God, while 16% don’t believe in life after death. It’s the same in other matters. Yet 75% of Orthodox Christians believe in the evil eye and jinxes, and most treat icons as amulets, and church sacraments, such as baptism, as magical rites of sorts. In other words, we’re dealing with paganism posing as Orthodoxy,” claims Koval. 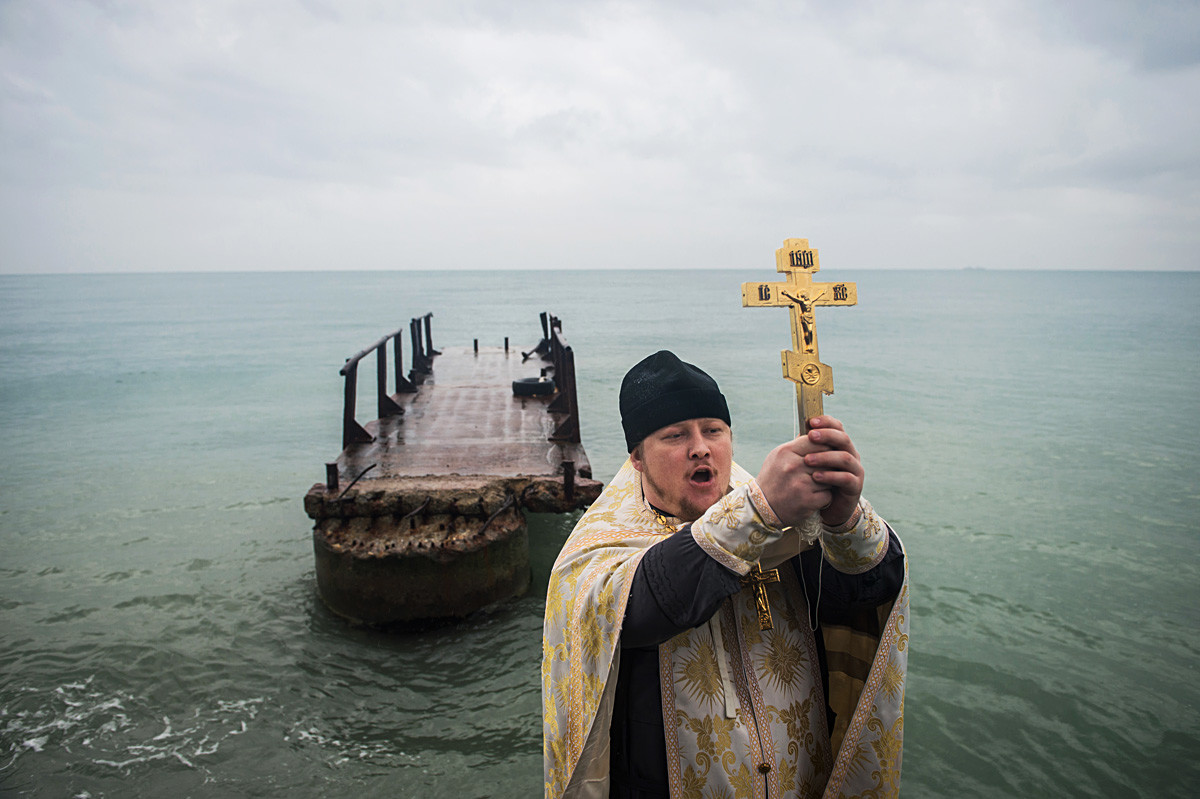 Tatyana was in her ninth month of pregnancy. The doctors told her the baby was late, but assured her that nothing was wrong. Frightened, she decided to light a candle in church “just in case.” On the very same day, her waters broke, and the baby was born healthy. In her view, this cannot be mere coincidence.

“Only after the birth did the doctors say that if the baby had stayed in any longer he could have suffered. I immediately decided to baptize him, just to be on the safe side,” she lets on.

All the same, she is not sure whether God exists, and in her free time tells other women’s fortunes with Tarot cards. But she likes the idea that her child is being watched over by his personal guardian angel.

The modern miracle of IVF

Lyobov, a portly brunette with brown eyes, met Sergei when she was 22. A year later they got married. Aged 25, she and her husband decided to have children. However, her only son was born when she was 45.

“My ovules weren’t sufficiently mature for fertilization. For 20 years I tried treatment, but nothing worked. When IVF appeared in Russia, we immediately decided to take the risk. We paid pots of money, but had a miscarriage,” recalls Lyobov.

The second procedure was successful, and she gave birth to a healthy son. His baptism was a no-brainer. But then Archpriest Dmitry Smirnov caused a scandal by saying that he opposed the baptism of children born through IVF or a surrogate mother. Later, Vladimir Legoida, an official representative of the Russian Orthodox Church, announced that the statement was the personal opinion of the priest, and not the church as a whole.

For his part, Hieromonk Alexander Mitrofanov attributed the need for IVF to the sin of the parents.

“The church opposes IVF because it has an abortive component. But this is the sin of the parents, not the child. In view of this, children cannot be denied baptism,” says the hieromonk. 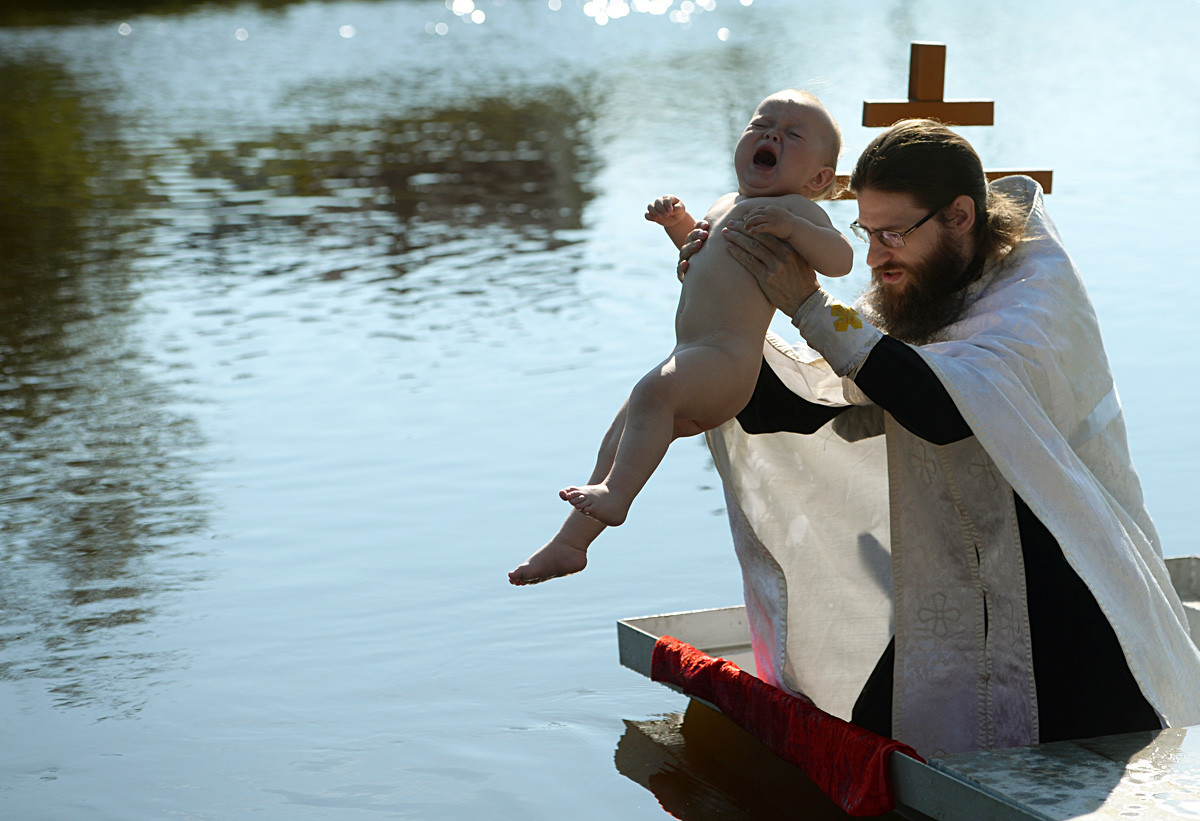 baptism on the Chusovaya river near the Prince Vladimir Church, Stantsionny-Polevskoy township

Nevertheless, Lyubov was afraid to talk about how her son had come into being.

“Such a child should be baptized all the more so, even if you yourself don’t believe in anything. Is it not a genuine miracle of the 21st century?” she contends.

“In any event, it's possible for people to believe yet be ignorant of dogma and attend church purely for social reasons, or they can believe and fulfill all the requirements of the church, yet be nasty in real life,” says Professor Koval

“Ultimately, only the Lord God knows who is close to Him and who truly believes from the bottom of their heart,” Koval sums up.