How Russians protect themselves from evil spirits 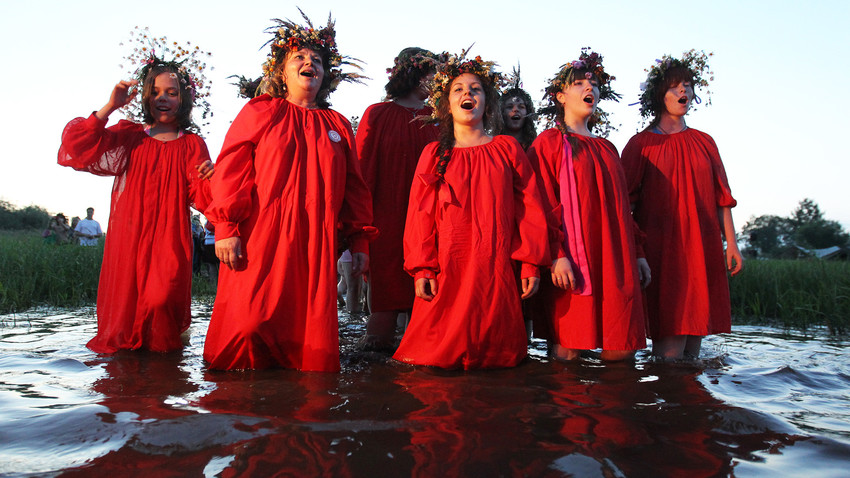 Konstantin Chalabov/Sputnik
Although Russia converted to Christianity more than a millennium ago, some pagan rituals still linger on.

Even after the baptism of Rus in 988, the ancient Slavs did not totally abandon their old gods. They remained convinced that certain rituals would help protect the family and home from evil spirits, evil eyes, evil energy, and… just plain evil. The inertia was so great that elements of paganism remain to this day.

In pre-Christian times it was a Slavic custom to bury one deceased relative under the threshold of the home to protect the living family members. They believed that it marked the boundary between the worlds of the living and the dead. When the home was being built, protective amulets were also laid under the threshold. Residents of different regions had their own kinds of amulet, but most often it was something sharp, like a knife, or small stones with protective symbols. Amulets were also hung over the threshold: a horse horseshoe, a sprig of wormwood, garlic, or simply a painted protective sign. Items positioned at the threshold were believed to be hexed, especially coins, threads, needles, or soil wrapped in a headscarf. Such objects could never be stepped over or touched with bare hands. 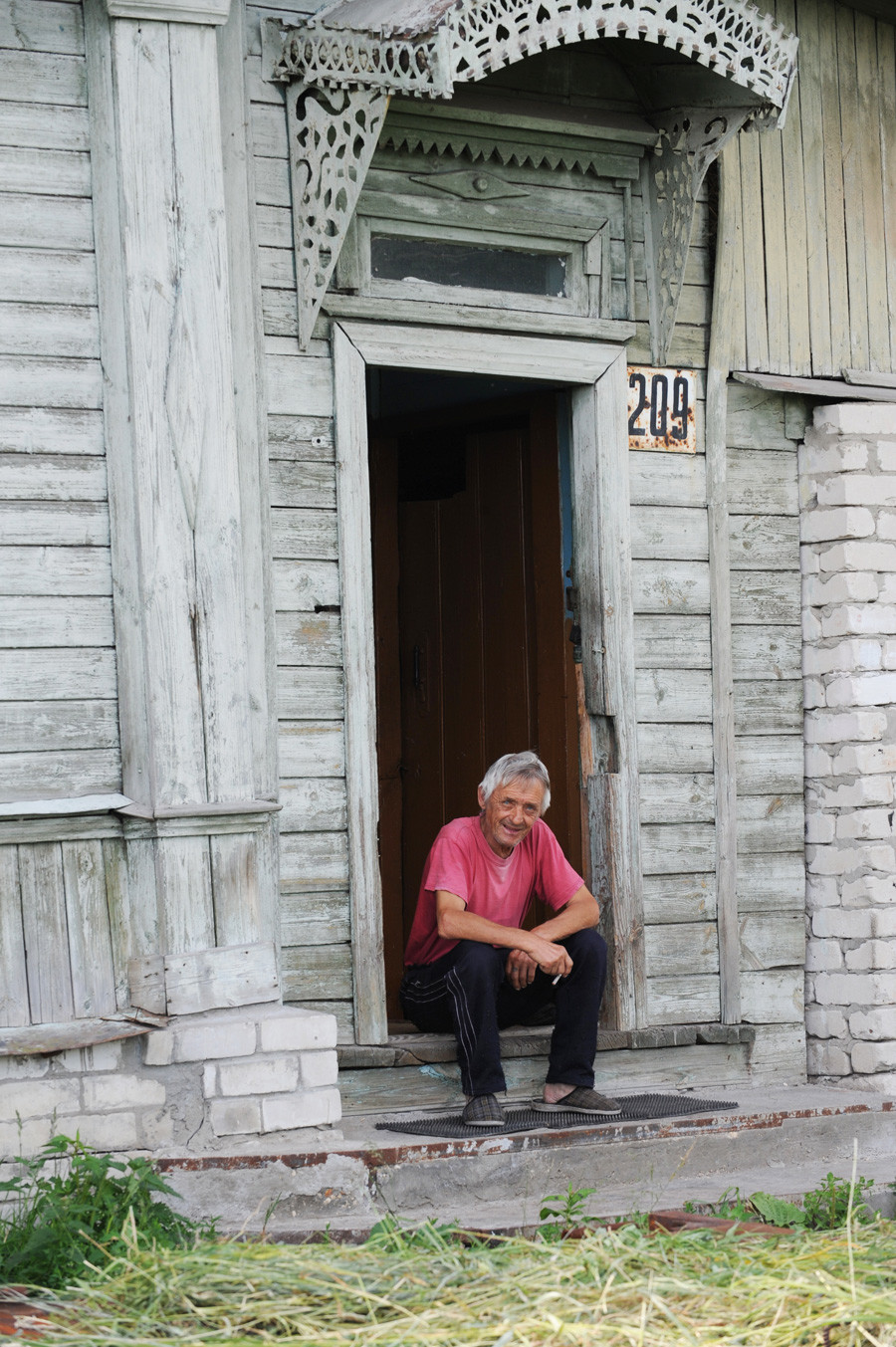 A private home in Murom.

Many Russian customs that live on today are thus connected with the threshold: no kissing, talking, giving gifts, etc. through an open front door. Even just standing at the threshold with the door open is ill-advised, since it may disturb the spirits.

2. Platbands (not for decoration)

If you look at a traditional Russian house, you will see that the facades and window frames are decorated with figured carving. This is not for aesthetic purposes. All symbols and patterns in times of yore had a sacred meaning. To protect themselves from the “evil eye,” the Slavs fixed carved platbands around the windows of their homes. Depicted at the center of the platband was a semicircle with rays coming out (the sun was the main symbol of life), crowned with a horse or rooster. A horse symbolized the pagan god Perun, and thus the house was under his watch, while a rooster was considered a prophetic bird capable of driving away the darkness in which evil forces resided. And in every house there were always curtains on the windows so that the “evil eye” could not peep in. 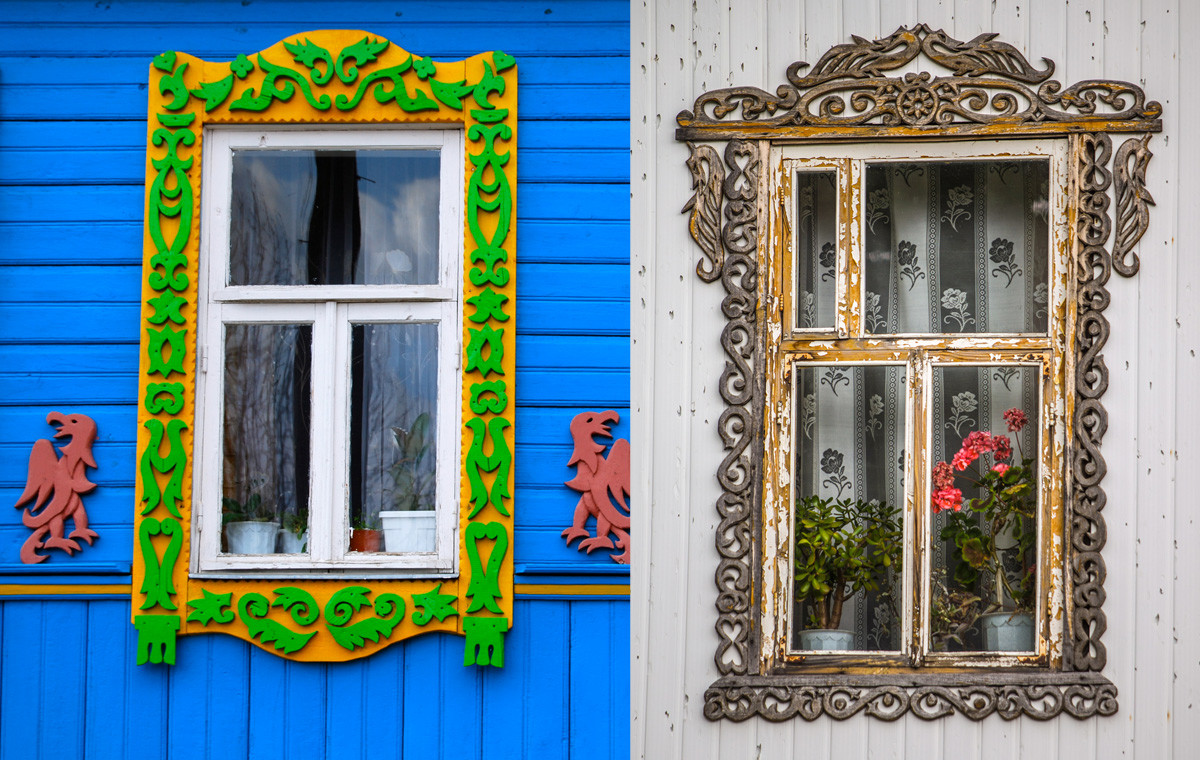 Other parts of the house were also decorated with three-dimensional carvings, including the porch, railings, and roof. In Russia’s northern regions, it was traditional to carve figures of swans (protectors of the water element), deer (protectors of the clan), or a horse’s head. Sometimes fantastic snakes with bared fangs or horned monsters (guardians of the boundary between the worlds of the living and the dead) could be seen. In the southern regions, jewelry was not uncommon, often in the shape of a horse’s head with dangling reins (the horse is a key symbol in Slavic folklore).

Even the facades of modern village houses often bear such pre-Christian symbols.

To fend off evil spirits, special signs and patterns were embroidered on people’s clothing. The embroidery followed the contours of the garment, in particular shirt collars, belts, and sleeves. It was believed that items handmade by blood relatives possessed the greatest power. 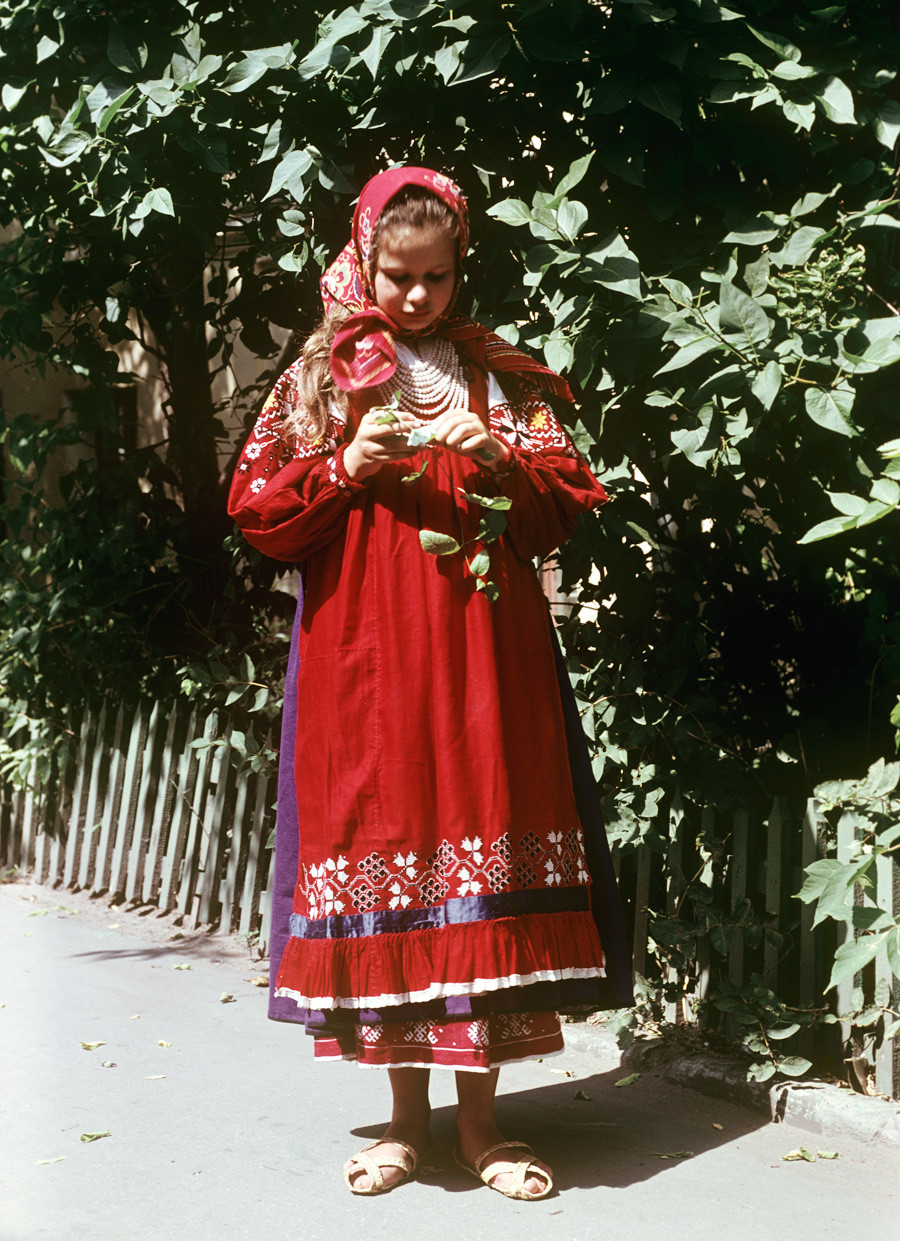 An ancient Russian folk costume worn by women of the Ryazan Province in the second half of the 19th century.

Among the symbols considered sacred by the ancient Slavs were circles with a cross inside (a fire-eye to protect against the evil eye), spirals (the symbol of the Universe), a crescent moon (fertility), and ears of corn (prosperity). In embroidered patterns it is often possible to discern images of pagan gods, inculding Makosha (the matron of the house) holding a spindle with which she weaves her fate, Rozhanitsa (the patroness of procreation), Svarog (the god of celestial fire and blacksmithing), and Veles (the god of agriculture). Protective charms on the pillow guarded against nightmares. Red was considered the most powerful color in embroidery — nearly every Russian fairy-tale tells of girls weaving scarlet ribbons and flowers into braids.

As time went by, embroidery became just a decoration, used to emphasize the so-called “Russian” style. In the Soviet years, for instance, foreign delegations were often greeted with a round loaf on a tea towel with “communist” embroidery. 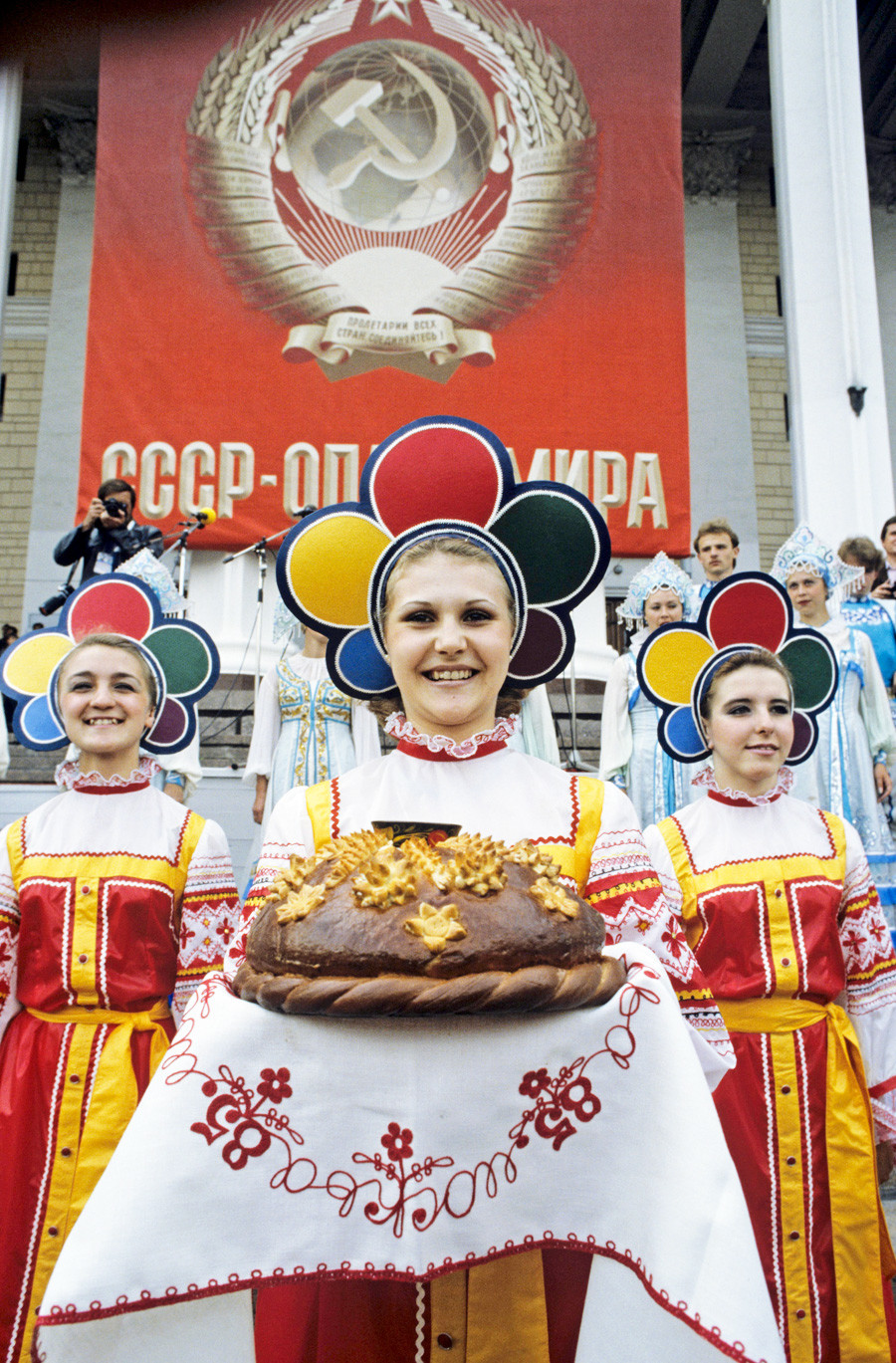 Opening the USSR delegation club at12th World Festival of Youth and Students. Greeting the participants with bread and salt, 1985.

The Slavs believed newborn children to be most at risk from evil spirits, so they protected them not only with embroidery, but also by making the most ancient type of amulet — a ragdoll guardian (Russian: bereginya from the verb berech meaning “to protect”) without a face (it was believed that evil spirits could inhabit the doll through the face). 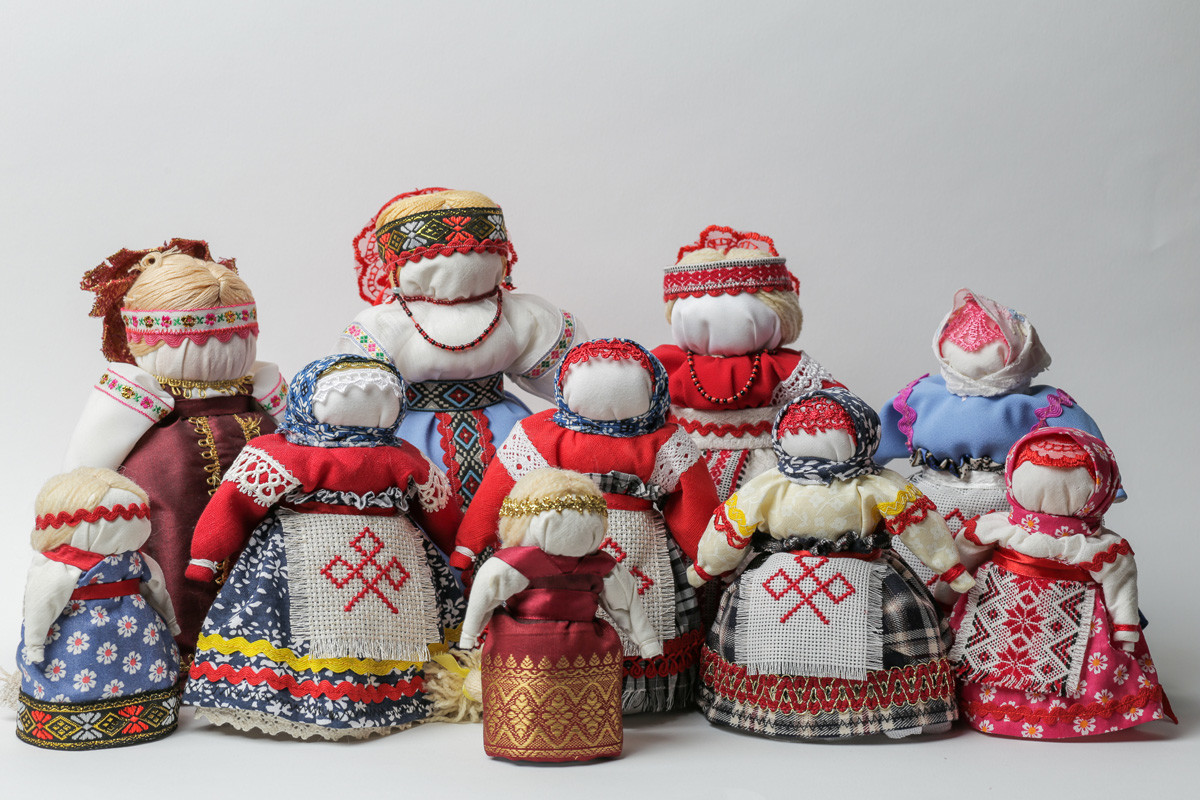 Such dolls were dressed in traditional embroidered costumes, and pieces of red thread were tied to their heads. They were believed to protect not only babies. Charms were presented to newlyweds and pregnant women to safeguard children from disease and insomnia. Instead of faces, sometimes crosses were embroidered as an ancient symbol of the sun. 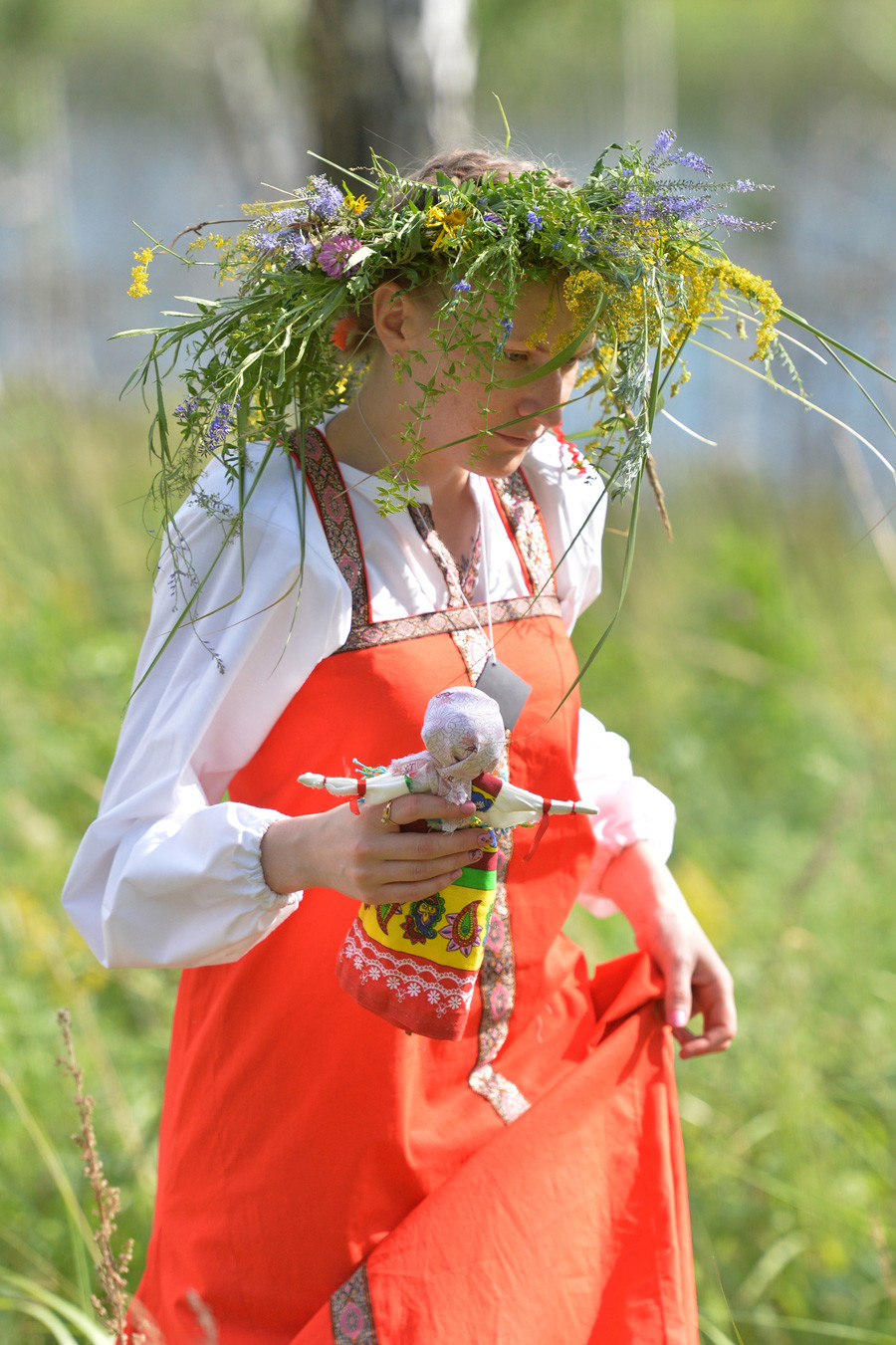 A young woman with a doll during the Ivan Kupala festival in the Chelyabinsk region.

Dolls could be made only by a woman as the continuer of her kin. The most powerful amulets were dolls made collectively by female relatives. It was believed that a ragdoll could only be made from worn clothes (it retained the energy of the wearer), and the fabric needed to be torn, not cut.

Like many other peoples of the world, the Slavs believed in the healing power of Mother Nature, and turned to her for protection against negativity. The easiest way to ward off the evil eye was to bathe or wash oneself with running water, so that it would carry away all the bad energy. Fire was also used for purification rites; for example, on Ivan Kupala night to mark the summer solstice, young people jumped over a campfire to metaphorically cauterize the body of all diseases. 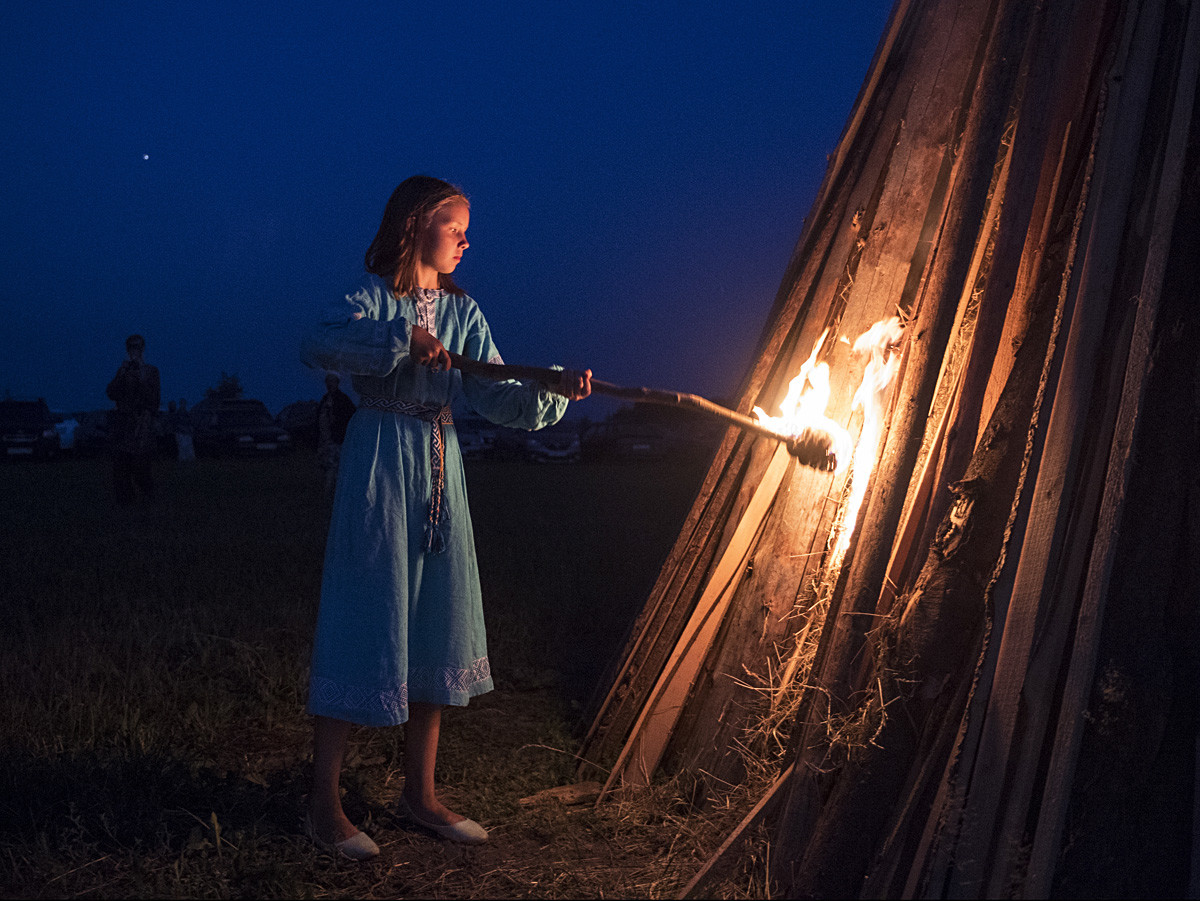 In Ancient Rus, salt was also considered a talisman. People carried it with them in a bag in the belief that it would absorb all evil. Likewise, wormwood was used to drive away evil forces from the home — sprigs were hung over doors and windows. Wormwood also supposedly protected travelers and ensured their safe return.