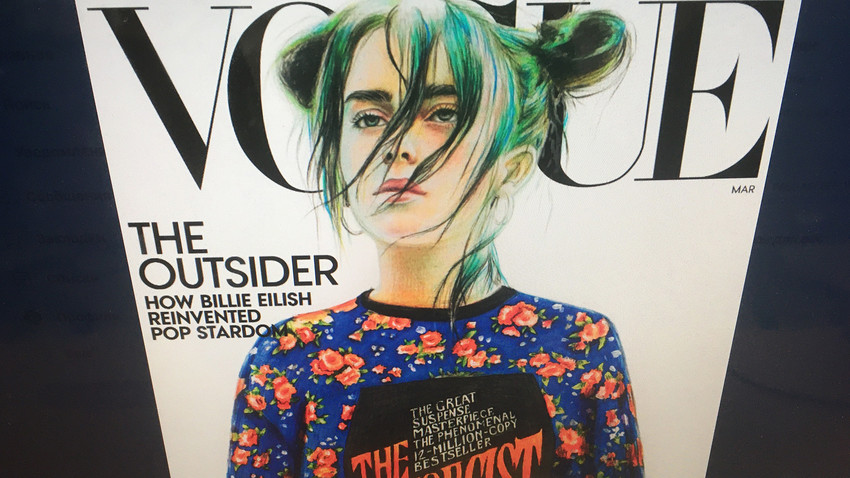 Photo of the American Vogue cover.

Russia Beyond
The magazine commissioned a portrait of Billie Eilish from the Russian teenager at the pop singer’s suggestion.

“I’m 16 and I love to draw,” says Nastya Kovtun on her Instagram account. The teenager has a moderate following on Instagram, where she posts her artwork, with some 7,500 followers.

And yet, against all odds, that’s what happened. The Vogue team reached out to the Russian teenager and another, American-based artist, 20-year-old Kaylee Yang.

“While Kovtun and Yang live more than 5,000 miles apart, speak two different languages, and draw in different styles, their common thread is Eilish,” wrote the magazine in a publication about its choice of the young artists.

It turns out Billie Eilish handpicked the pair on Instagram for Vogue to commission a portrait for its cover. Handpicking the right candidate for the job might have been tough, yet it was even more difficult to convince the girls it wasn’t a scam.

To convince the teenager in the Russian province to take the job, Vogue’s team had to send a scan of the issue’s masthead and translations in Russian. This sealed the deal.

thank you @billieeilish and @voguemagazine for giving me this opportunity! Also thanks to @liana_ava @nicburdekin @lindseymlaw and other people who have worked with me this is a great honor for me! ребята меня джибошит

“Thank you @billieeilish and @voguemagazine for giving me this opportunity! Also thanks to @liana_ava@nicburdekin@lindseymlaw and other people who have worked with me,” wrote Kovtun on her Instagram page, sharing the result of her work with her followers.

Thus, Nastya became the youngest person to have ever designed a Vogue digital cover and made quite a commotion in the Russian media.

Kovtun first learned about Billie Eilish after watching the 13 Reasons Why series on Netflix, where Eilish’s song ‘Bored’ featured on the soundtrack, states a Vogue article about the young artist. Since the girl did not speak English, she had to translate Eilish’s lyrics to get the meaning behind the music she loves so much.

“The words are the strongest on the planet. They can make you cry, laugh, get angry, or worry,” Kovtun is quoted as saying.

She goes on about her idol: “Billie is a simple person like us all. She does not put herself higher than her fans, and talks to them like friends. I never saw anything similar to her. I haven’t met anyone who has influenced me and what I draw as much as she did.”

Here are Nastya Kovtun’s other works of art.

can't explain how much this drawing is better in real life 😭

new drawing of billie happy birfday to you, our cute baby!!!!

I drew this in September and i can't remember why I deleted this. also hope ull like it

I started this drawing in October, aand i decide to finish it now hahz