Why do some Orthodox Russians convert to other religions? 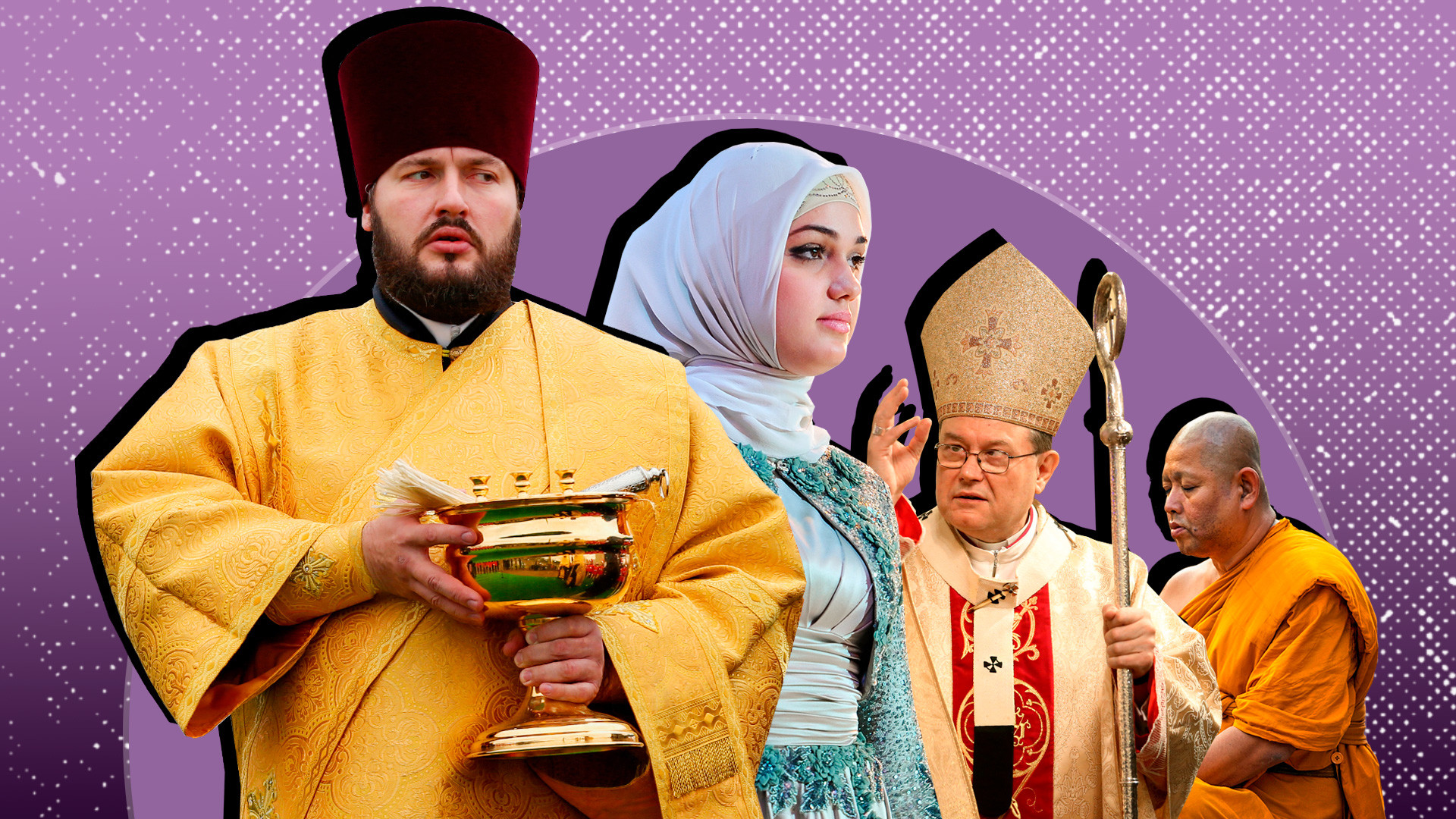 One January day in 2017, 38-year-old web designer Evgeny went to Sunday service at the local Orthodox church out of habit. Stepping mechanically inside, he made his way through the crowd of disgruntled babushkas.

“They sang something in Old Slavonic and muttered to me about buying a candle, where I should go, what I should do. It was all incomprehensible,” recalls Eugene about one of the last Orthodox services he attended. “Then the priest started talking about who to vote for in the presidential election.” 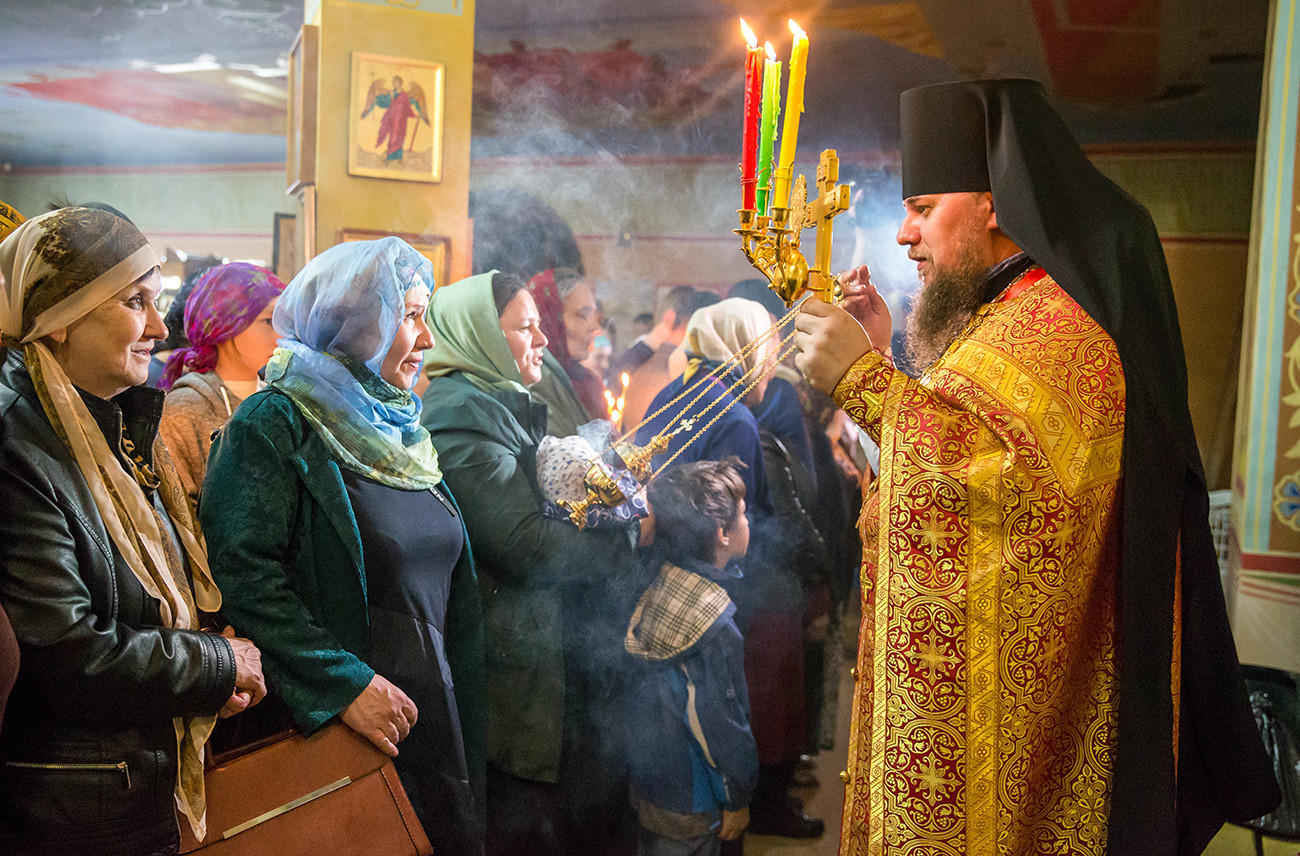 Easter service in the Church of Michael the Archangel-Elena Afonina.

Suddenly, he felt like he’d been “struck with a red-hot knife.” He stood there among the faithful, not understanding what he was doing. Soon afterwards, he made up his mind to quit the Russian Orthodox Church.

According to a 2019 poll by the All-Russian Center for the Study of Public Opinion (VTsIOM), 63% of believers in Russia are Orthodox Christians, with the remaining 37% adhering to other religions (the survey did not take into account atheists). As for how many in Russia have abandoned Orthodoxy in favor of another faith, the statistics are silent.

66% of Russian Orthodox Christians were baptized in childhood by decision of their parents, reports VTsIOM. Evgeny was no exception. After baptism, he attended mass with his parents every week like clockwork. When he was about 25, his sister died (he does not say how), and a year later he divorced his first wife. It was then that he began to ask some serious questions about his faith.

“I started going to different churches and monasteries. I wanted to find answers: What was the purpose of praying? What was the meaning of the service? Why did the priest tell us to be humble and to fast when he was dressed up like royalty? The answers were a fob-off: ‘Go and pray, read the Bible.’ Orthodoxy itself began to push me away,” recalls Evgeny.

This arm’s-length attitude may be due to the high workload of parish priests, according to Metropolitan Hilarion of Volokolamsk, speaking on the program Church and Peace on the TV station Russia-24. In his view, priests do not even time to talk to their own families. 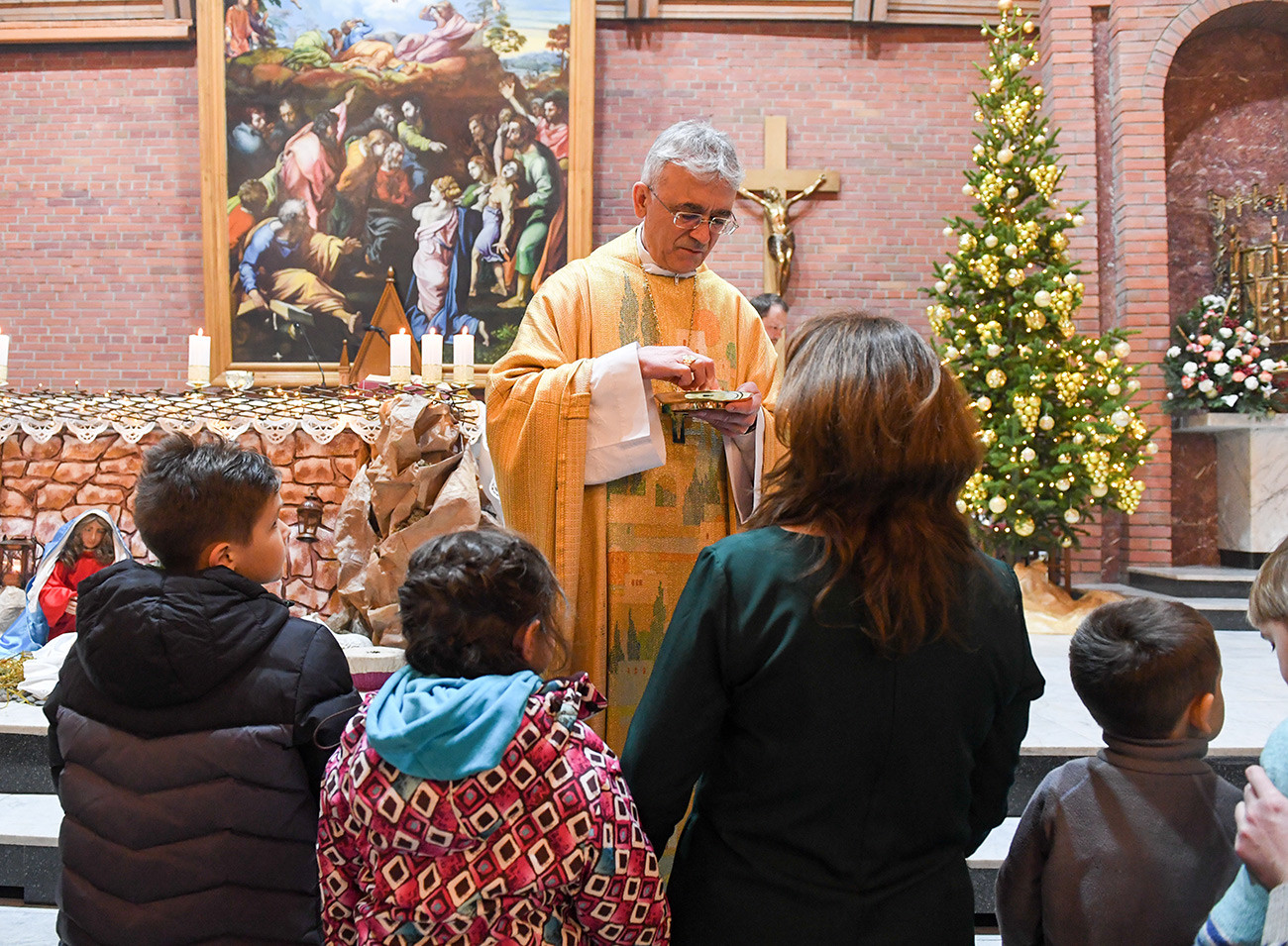 The celebration of Catholic Christmas in Novosibirsk.

“Priests can be affected by fatigue, overwork, burnout, shortage of time, or simply lack of talent,” Mitrofanov explains. “And sometimes people just want someone to blame. I didn’t feel loved, they say, so I joined a sect.”

Evgeny’s switch from Orthodoxy to Catholicism happened when he and his second wife and two children moved to a new apartment located near a Catholic church.

“My wife and I went to mass there. I was surprised by how many young people there were. And everyone understood what they were praying for, no one was looking at you disapprovingly. The emotional lift, the unity we felt even without participating in the actual service, I’ll never forget. Afterwards I spoke to the priest. He asked me if I was running away from myself. I was blown away,” says Evgeny rapturously. 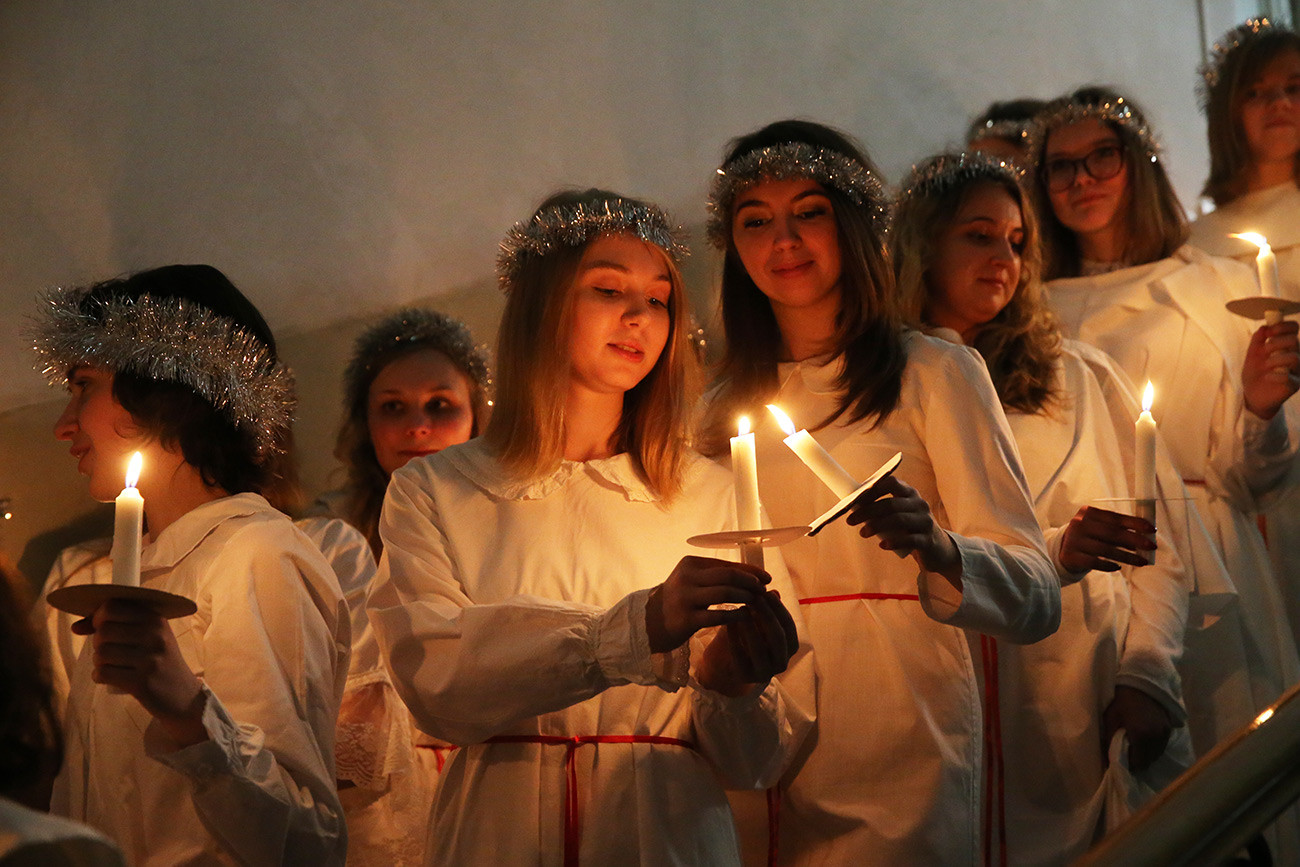 During the celebration of St. Lucia Day in the Swedish Catholic Church of St. Catherine.

After that, the couple were given lessons in the history of the Catholic Church, and time to make sure they were making the right choice. A month later, Evgeny and his wife officially became Catholics.

For Evgeny, it was Catholicism’s openness and willingness to answer questions that attracted him most:

“We’re still learning about all the festivals, but at each service the priest explains what holy day it is, what it means, why it’s important. We wouldn’t want to go back to Orthodoxy. It was a decisive step,” he concludes.

Yuri Vashurin, a 25-year-old Chinese and English language teacher from Chelyabinsk, left Orthodoxy for Buddhism aged 19. His mom baptized him at the age of three, and between the age of 10 and 15 he served as an altar boy in the local church. There was no ordinary hanging out with classmates — Yuri was too shy and reserved for that.

“I was forever being taken to church, given Holy Communion, told to I pray in the morning and evening, to fast, etc. Since children lack critical thinking of their own, I took it all at face value,” says Yuri.

Later, as a teenager, he took exception to what he saw as the “authoritarianism of the Orthodox Church.” 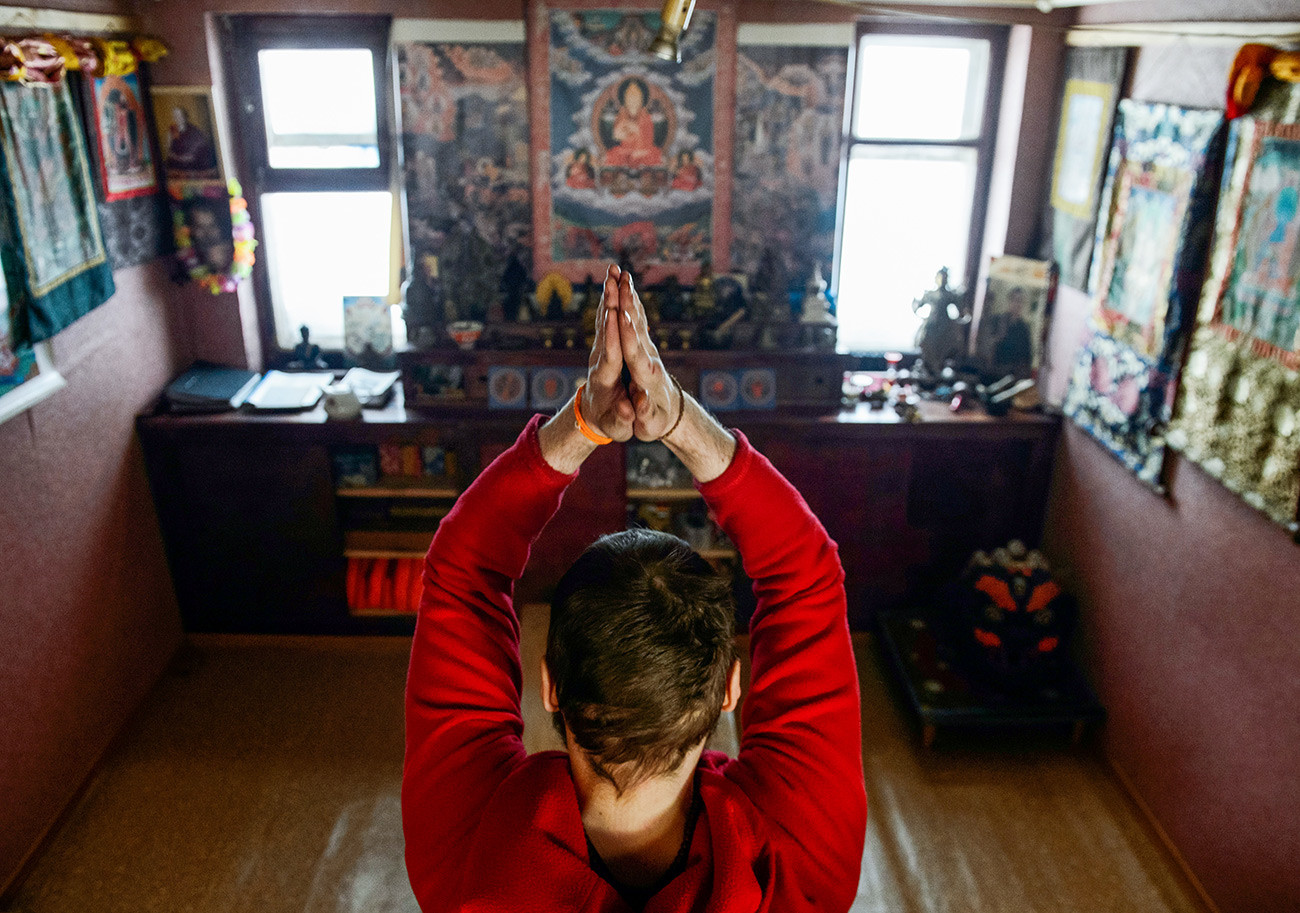 Buddhist monastery on Kachkanar mountain in the Sverdlovsk region, Russia.

“I had to observe all these rites simply because the priests said so and the Lord God supposedly wanted me to. I began to question many of the rituals and precepts. The more I looked, the more they seemed to be like tinsel,” says Vashurin.

“They thought the Antichrist would appear at any moment, and believed in Masonic conspiracies. To get away from it all, I decided to study Chinese language and culture at the university. That sparked my interest in East Asia, where Buddhism has always played a prominent role,” Yuri explains. 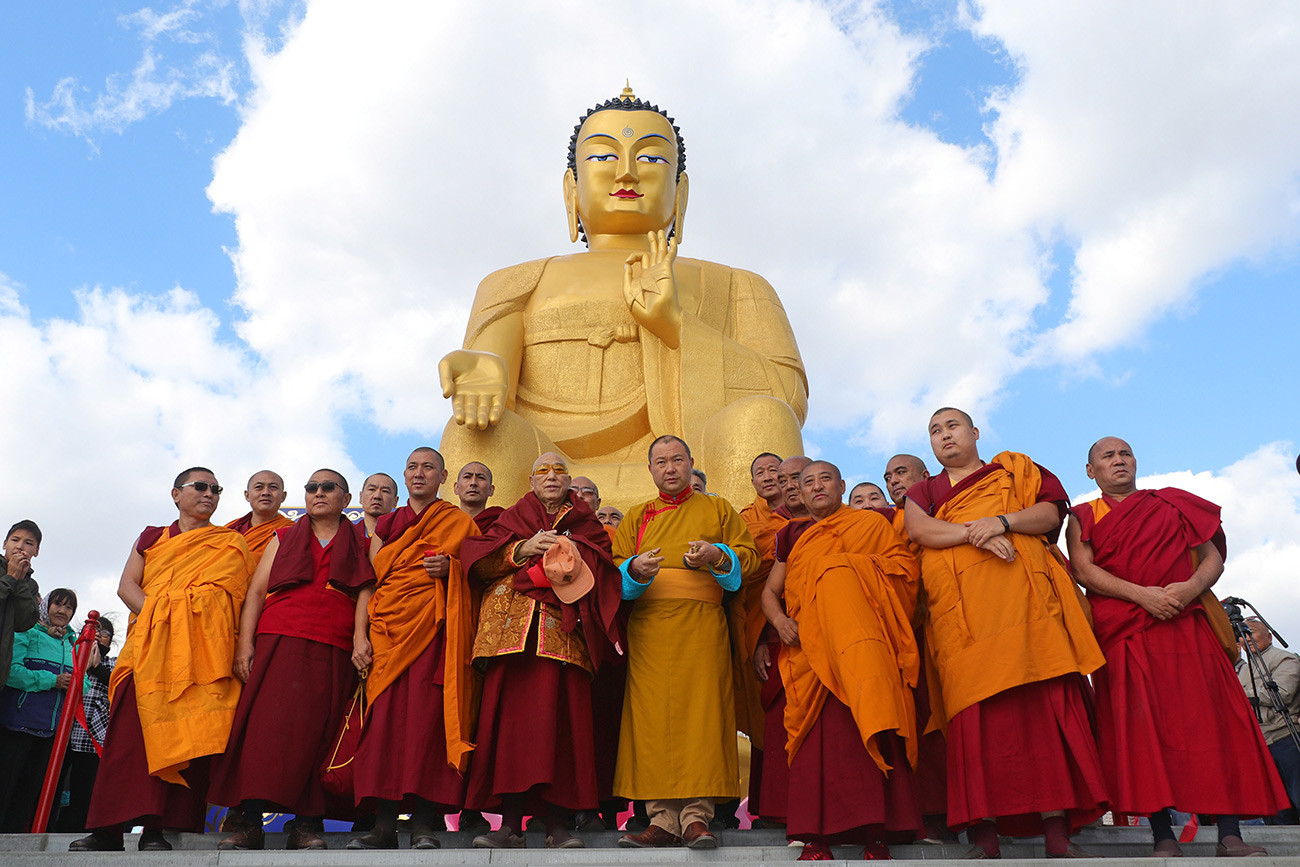 Opening of the largest Buddha statue in Europe in Kalmykia, Russia.

He says that he was attracted by the “unobtrusiveness” of the religion and its less rigorous attachment to sacred texts. There were no Buddhist temples in Yuri’s hometown, so he began to study the Buddhist scriptures and practice meditation by himself.

“I really liked that you were encouraged not to blindly believe what the Buddha said, but to check its compatibility with your own outlook. I’d never seen anything like that before,” Yuri muses. “Fortunately, my parents were no longer fanatics. Only the local priests saw me as a rebel, but I felt like the chains were falling off me. I felt like I was breaking free from the pressure and opening up to the world. I was becoming a normal person at last.”

Religion for (and against) women

Daria Khmeleva, a petite, brown-haired choral music student, is about to turn 18.

You won’t see her on social networks at parties — or see her at all for that matter. She is only ever photographed from behind and wearing a hijab and scarf. With her in the photos is a young man, presumably a Muslim. His page on the popular Russian social network VKontakte states that “jealousy is a quality of pious people.” Daria’s page, meanwhile, is a mosaic of posts from Muslim communities with a picture bearing the words: “Reform yourself.” She converted from Orthodoxy to Islam last year against the wishes of her parents.

“They baptized me when I was about five, I was very happy. I wore a crucifix, but it soon snapped in half. It was probably a sign,” says Khmeleva. 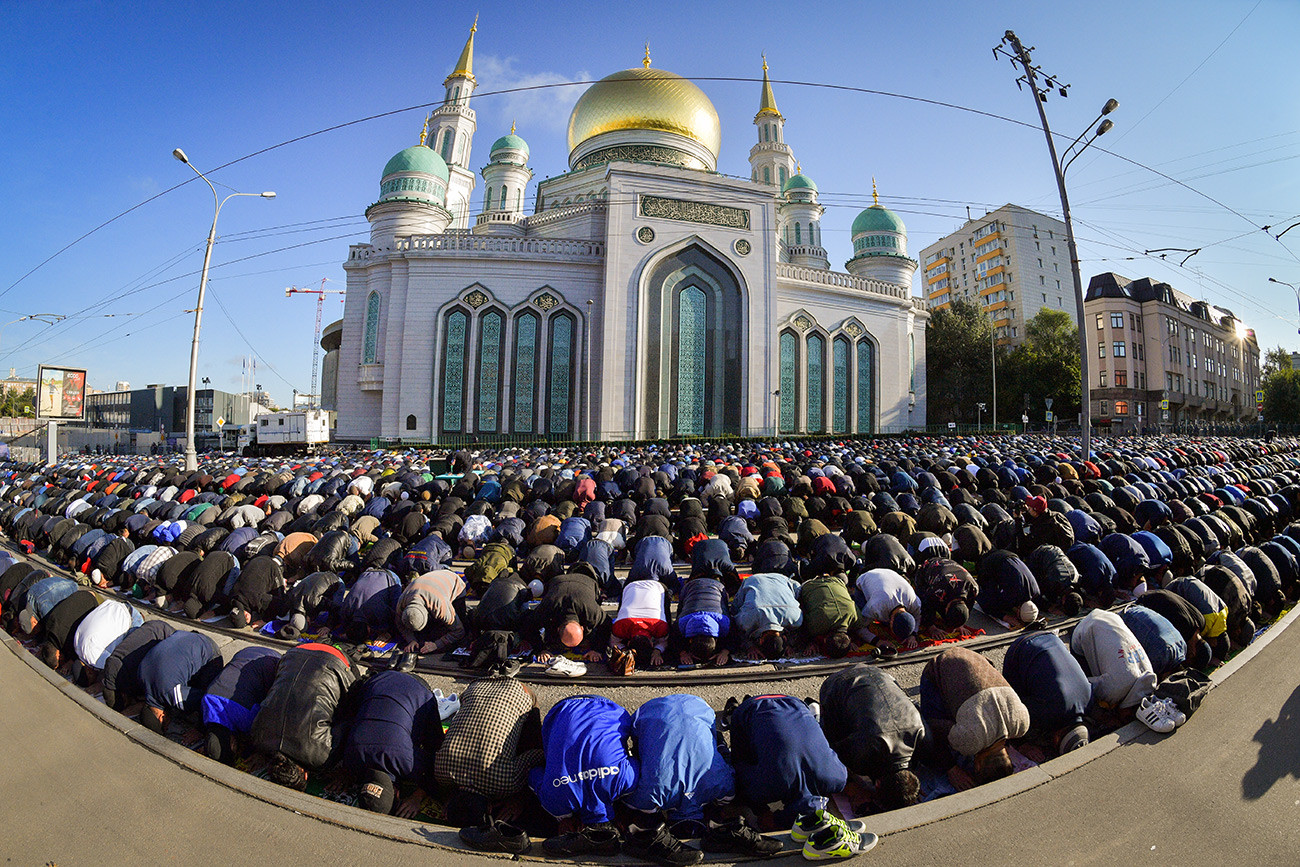 The Muslims on the day of the feast of the sacrifice Eid al-Adha at the Moscow Cathedral mosque.

Her parents were critical of Islam for its overly strict rules, yet Daria took them to heart. Nevertheless, when she turned 14, she resolved to test her parents’ opinion. At school, the only one in her class to do so, she decided to write an essay on Islam in order to explore this “wrong” (according to her parents) religion in more depth.

“I still have that essay. The first thing that struck me and appealed to me was that a woman in Islam is not a slave or a servant, as many might think, but a treasure that her husband protects,” recalls Daria.

“First, I made friends with Muslims on social networks. I learned to perform the namaz [prayers], and looked for sisters to help me,” Daria explains.

Soon afterwards, she became a Muslim. Asked whether her boyfriend forced her to convert, Daria is silent. Likewise on the question of her parents’ and sister’s reaction. She simply describes the transition process as “very difficult” for the whole family. In her view, her parents had no interest in understanding her reasons. She also admits that in the early months she doubted whether she had made the right choice.

“But any doubts I have quickly evaporate when I read the Koran,” she says.

Not all women convert from Orthodoxy to Islam because of love for a Muslim man, says 29-year-old ecologist Amina (called Alena before she adopted Islam). She converted to Islam two years ago after several years of studying the religion. 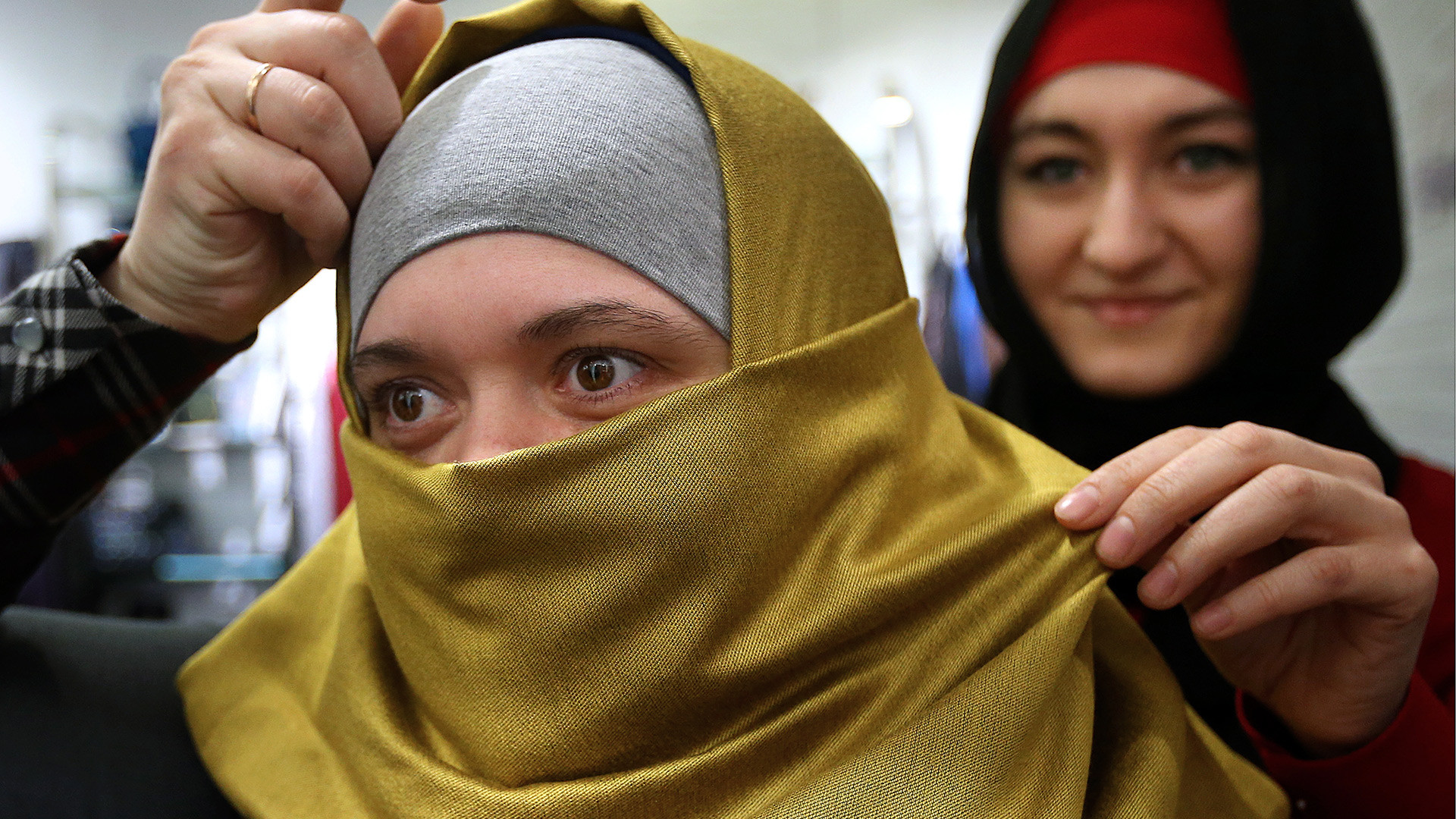 A woman chooses a hijab in a Moscow shopping center.

“The religion itself is very clear and straightforward. Orthodoxy, for example, states that God is the father, son, and holy spirit — three-in-one. It’s all a complete mystery. In Islam, however, a good attitude towards parents and women is extolled, that’s important.”

After reading the shahada (the Muslim profession of faith in Allah and the Prophet Muhammad) at the mosque, she says that she was overcome by a feeling of joy and harmony. Amina continues her professional studies as well, having recently completed a speech therapist course. She currently works in her chosen field, but soon hopes to get married. She says that her parents were “wary” at first, but later resigned themselves to her decision.

“The important thing is to approach God with one’s eyes open. How a person reaches their decision is another matter,” says Amina.

It’s not about religion

According to Hieromonk Alexander Mitrofanov, Russians rarely leave Orthodoxy for other faiths.

“I know only two. They both joined the Old Believers, then one went over to Islam. But in my opinion, it had nothing to do with the search for meaning, just a lack of commitment on their part,” argues the hieromonk. 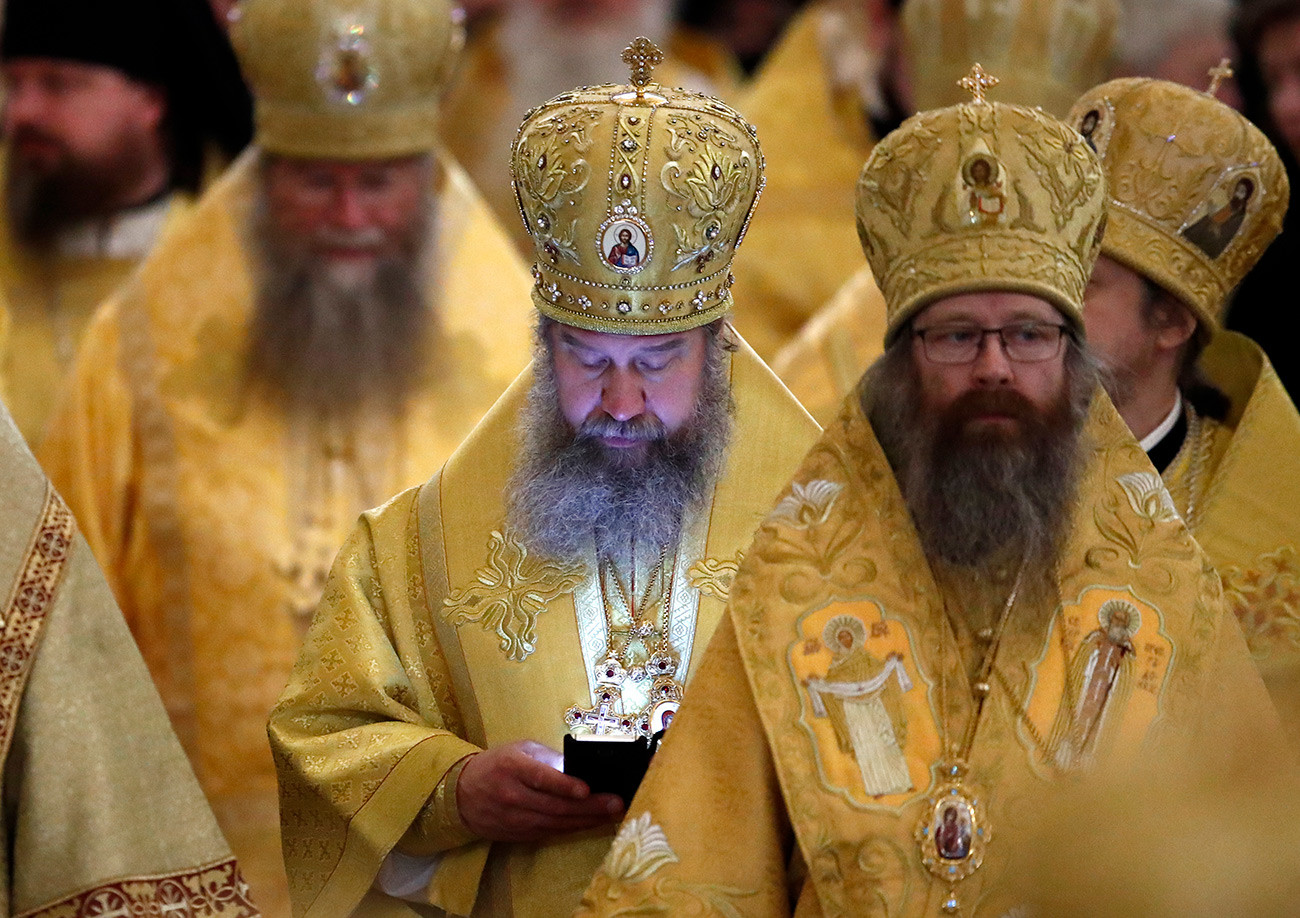 Priests during the divine Liturgy in the Church of Christ the Saviour.

Mitrofanov claims that, on the contrary, the flow is greater in the other direction, with more people in Russia coming over to Orthodoxy from the arms of other religions or sects.

“Yes, it happens sometimes that a person abandons Orthodoxy having failed to understand and recognize it. But usually if the individual gets to know and understand the faith, it becomes a lifelong love,” sums up Mitrofanov.