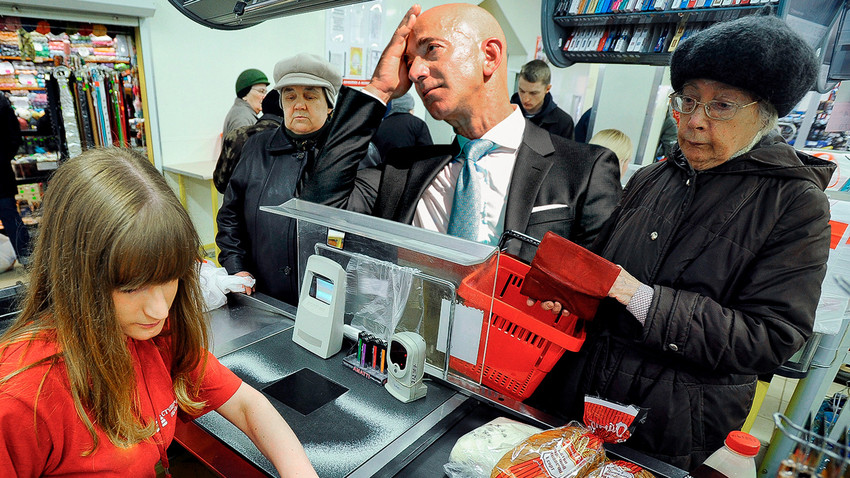 Ruslan Shumakov/TASS; Getty Images
What could the richest man in the world do against an army of Russian grannies...

When was the last time you dropped by a Pyatorochka grocery store for a can of herring and pickled cucumbers at a discount? Guess what, this babushka-oriented retailer has outsold Amazon itself, according to the Global Powers of Retailing report from Deloitte.

That’s right, one of the biggest multinational American companies, founded by  the (now) richest man in the world, Jeff Bezos, has succumbed to the ever-growing consuming power of Russian babushkas and other low-income customers.

Deloitte’s report placed Pyatorochka’s parent company, X5 Retail Group N.V., which specializes in consumer goods in Russia, at 18th place in the list of the 50 fastest-growing retailers in the world. Amazon.com, Inc. is listed only at no.27, with evenNIKE Inc. sitting higher up, at24.

The Russian retailer achieved a compound annual growth rate of 21.4 percent in the 2012-2017 fiscal years. In contrast, Amazon.com, Inc. demonstrated growth of 18 percent and NIKE, Inc. — 19.2 percent, in spite of the inexplicable ‘zoomer’ generation fascination with Nike Air Max sneakers.

“X5 Retail Group N.V. witnessed a spike in retail revenue of 25.3 percent year-on-year, benefiting from the acquisition of a number of stores from both Sedmoy Kontinent and Monetka retail chains. In addition, in December 2017, X5 Retail Group acquired a number of stores from the O’KEY retail chain in St Petersburg and Moscow, however, this acquisition did not contribute any revenue to the retailer in FY2017,” says the Deloitte report.

The Russian retail giant is, of course, far behind Amazon and Nike when it comes to actual total revenue. Amazon, the fourth-biggest global retailer today, has made a total of $118,5 billion in 2017, while the Russian X5 Retail Group N.V. has only made $22,2 billion in the same year.

Babushkas of Russia, Pyatorochka needs you to buy more to catch up to Jeff Bezos!