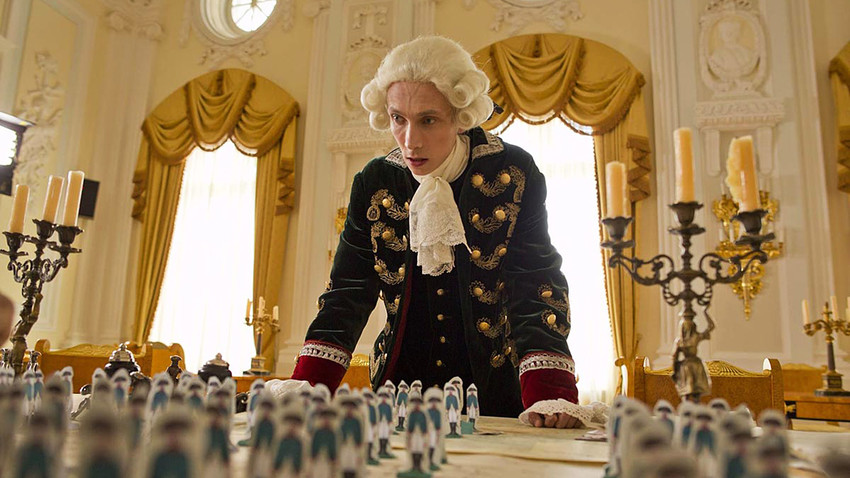 Maxim Bespalyi/Star Media, 2013
The Russian TV shows and movies available via Amazon Prime are almost exclusively historical dramas, but the service does offer a few thrillers and even a sci-fi blockbuster, as well!

June 1961. A small and safe town of Strunevo, located 60 miles outside of Moscow is rattled after the death of a school teacher and ensuing investigation. Detective Rodion Stotsky begins to unravel much more than he bargained for during his investigation.

Nineteen-year-old Anna, living at the end of the nineteenth century in the town of Zatonsk, unexpectedly discovers that she possesses supernatural powers. The spirits of the dead literally haunt her, begging for help. Aided by her visions, Anna manages to investigate and solve a number of mysterious crimes which have baffled the police.

The election of sixteen-year-old Mikhail I Fyodorovich Romanov to the Russian throne in 1613 marked the beginning of a dynasty which was to rule Russia and, from 1721, the Russian Empire for over 300 years. This epic show tells the story of the dynasty, from its dawn to its ultimate annihilation.

It's the end of the thirteenth century. Ancient Russia is under Tatar-Mongol rule. Grand Prince Yaroslav dreams to unite the scattered Russian principalities and get rid of the hated Tataro-Mongols, but his own brother, the disgraced Prince Boris, and his eldest son Vladimir stand in the way.

Ekaterina: The Rise of Catherine the Great

Ekaterina, a German princess, is selected to marry Peter the Third, heir to the Russian throne and grandson of Peter the Great. Her story, filled with emotion, struggle and passion shows that even in an age of imperial dynasties, power is not given. It is taken.

The Heritage of Love

A young duchess falls in love with an army officer during the last days of Tsarist rule in Russia. Too soon, the violent WWI and then the Bolshevik revolution separate the lovers. Yet, their love manages to survive through the generations.

It is the year of 1917. Russian soldiers, who have been fighting the Germans in brutal trench warfare for years, are in despair and the army is near collapse. The tsar has abdicated the throne. In a last attempt to strengthen the spirit and resolve of the troops, the Russian Provisional Government establishes the first all-female “Death Battalion”.

The Dawns Here Are Quiet

It is late spring of 1942, and the Great Patriotic War is in full swing. A long way off from the front-line, the Germans make an air landing operation in an attempt to get through to the Kirov railway and the White Sea - the Baltic Sea Canal. The only thing in their way is an anti-aircraft artillery unit of corporal Vaskov and five young women in training.

I Am a Teacher

Pavel is a mild mannered school teacher, whose village is occupied by the fascists. He believes in such basic human values as love and family. However, in this time of war, as the enemy shows its true face, he must make an uneasy choice to either survive and adapt to the new regime or fight for his family, love, Homeland, ideals and beliefs.

WWII catches a young student Lyudmila Pavlichenko off-guard in Odessa. She volunteers in the army and is moved to the front line after a brief stint in the sniper school. Her natural marksmanship and ability to keep calm under duress turn Lyudmila into a true sharpshooter with a personal hit list of over 309 names. This joint Russian and Ukranian production tells a story of a woman who alone changed the course of history.

This Russian series is based on a book, once considered a serious danger to the future of the Soviet Union. ‘Life and Fate’ is an epic tale of World War II and a reckoning with dark forces emerging, including Stalinism. With Hitler and the Nazi army looming on the Front, the series takes us deep into the hearts and minds of citizens and soldiers struggling to cope with the ravages of war.

Once upon a Time in Odessa

This show tells the story of a gangster Mishka Yaponchik, a Ukrainian gangster, Jewish revolutionary and Soviet military leader, and his daring crimes in the Ukranian town of Odessa. Loved by the people and hated by the authorities, this famous gangster was known as the Robin Hood of Odessa. Would he be able to preserve his reign in the turbulent years of the Bolshevik Revolution in Russia?

In 1952, A young mother with a six-year-old son meets an officer, Tolyan, while on a train ride and falls for him. They begin living as a family only to realize Tolyan is not who he pretends to be, he is a professional thief. This 1997 film was nominated for an Academy Award as the best foreign picture.

Based on a true story, ‘The Icebreaker’ follows a harrowing 1985 voyage to the Antarctic. When a ship, Gromov, gets trapped trying to dodge a deadly iceberg, the team has to rally in a life and death fight for survival.

She was referred to as the "Soviet Sophia Loren" and "the most beautiful Kremlin weapon". But who was the Red Queen? Was she the queen of the catwalk or a KGB agent seducing foreign diplomats? How did she manage to succeed and what was the price she had to pay? This Russia-Ukranian show tells the tragic story of Regina Zbarskaya, the most famous Soviet model of the 1960s.

During WWII, two young Soviet women, Arina and Zoya, end up being trained as spies in order to go behind enemy lines in Riga, Crimea, Poland, and Germany. They come from different social classes, yet their fates are intertwined by tragic events that happened in the past. For both of them, risking their lives for the Soviet government and victory in the war is the only way to clear their names of the crimes they’ve been framed for.

Katya is a girl from a wealthy family who finds herself in an international prostitution trafficking network. In the United Arab Emirates, she meets Liza and they return to Moscow together. Liza and her roommate, meanwhile, make their living by dating rich men and let Katya stay with them in a small rented apartment. Will the women find their “happiness” in the rich men’s worlds?

A young girl struggles to become a ballerina and conquer the country's main stage. Yet her path is paved with ruthless challenges not everyone could withstand.

Somewhere in Northern Russia in a small Russian Orthodox monastery lives an unusual man whose bizarre conduct confuses his fellow monks, while others who visit the island believe that the man has the power to heal, exorcise demons and foretell the future.

I won’t come back

Anya, a young academic raised in an orphanage, is on the cusp of success when she's accused of drug possession. While in limbo hiding from the police, she hits the road with Kristina, another orphan several years Anya's junior, in search of her possibly mythical grandmother.

After a spaceship crash-lands in the center of Moscow, a young woman finds herself torn between loyalty to her seemingly normal life and the allure of a new state promised by one of the aliens.

In the midst of her wedding, Princess Miroslava is kidnapped by a dragon and carried away into a castle on a remote island. Mira is then trapped in a stone cage with only a mysterious young man named Arman to keep her company... but who is he and what is he doing on that island? Miroslava will know the truth too late: loving a dragon will reveal the bitter truth.

Polina is going through a breakup with her boyfriend Nikita. She decides to change her environment radically, spending her vacation in the village of Lopushki. Meanwhile, Masha, Polina's cousin, is experiencing a crisis in professional growth. She decides to start her own business in Moscow.