Why are Russians so good at ice skating? 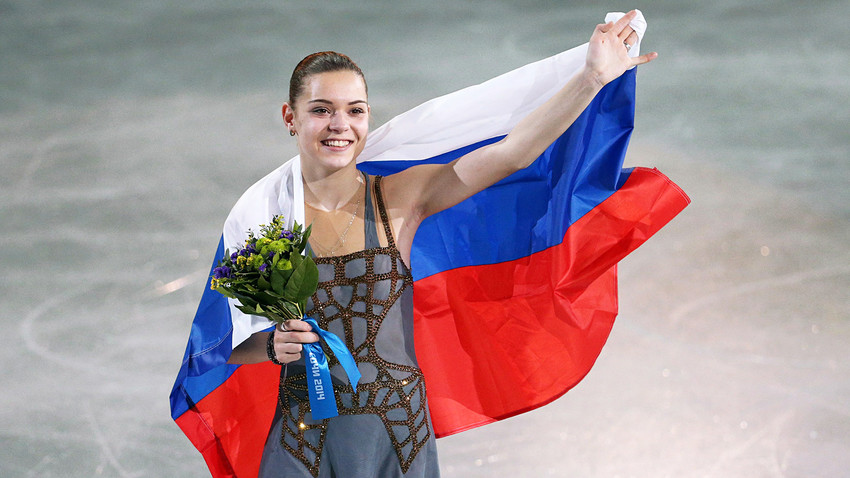 Adelina Sotnikova celebrates her gold medal at the Winter Olympics in Sochi, 2014

ZUMA PRESS/Global Look Press
We grew up in a land of snow and ice. Figure skating and ice hockey were the go-to outdoor pastimes of Soviet children.

Vladimir Putin has made a lot of headlines in recent years with his ice hockey playing. His journey into ice skating at the late age of 60 was reportedly inspired by the award of the 2014 Winter Olympics to the Russian city of Sochi. But the reason various other government officials and oligarchs eagerly rushed to join the President on ice was that most of them already could ice skate. They were happy to return to their forgotten childhood hobby. Putin’s lack of ice skating experience, on the other hand, was an exception rather than the rule. 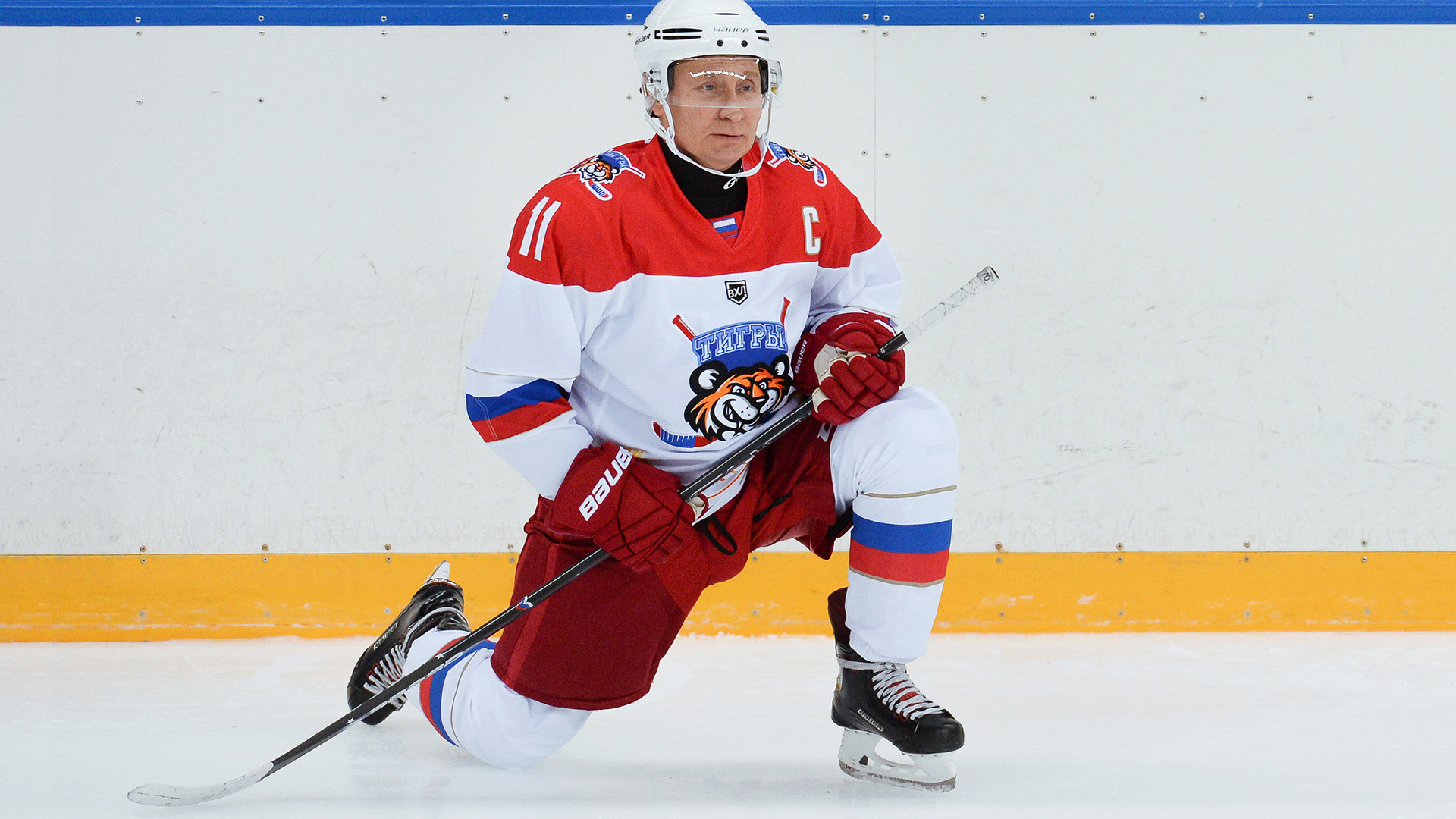 Ice skating was popularized in Russia by Peter the Great, and Alexander Pushkin refers to it as a popular pastime of the masses in several of his works, most notably in Evgeny Onegin: “Boy-tribes with skates on loudly slice / their joyous way across the ice.” That was the bard’s early 19th century view of the winter pastoral. 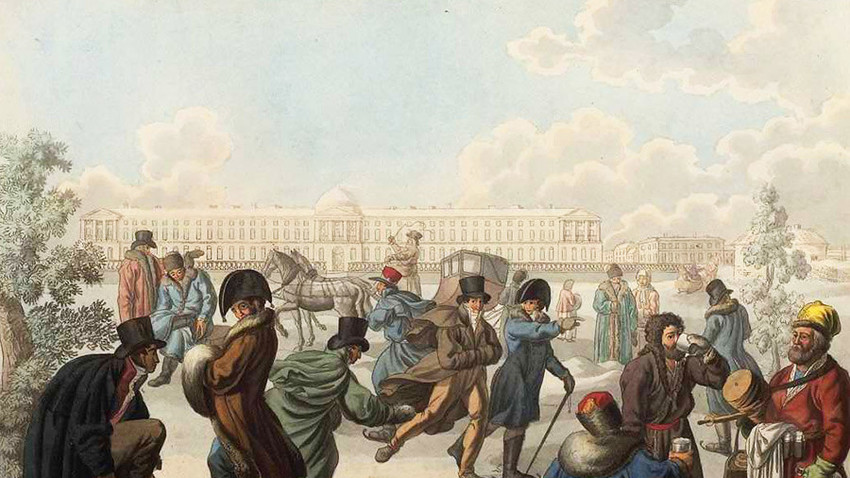 Skating on the Neva by Emelyan Mikhailovich Korneev, Graphics, 1812

In the Soviet Union, ice skating picked up. It was a minimum-effort sport to engage in, seeing as all flat surfaces, including football fields, tennis courts, and random empty spaces froze over almost entirely by themselves during winter, and stayed that way for six months a year. Improvised skating rinks were easy to maintain, and brought a lot of joy. Where soccer would be the street sport of choice in summer, ice hockey replaced it in winter. 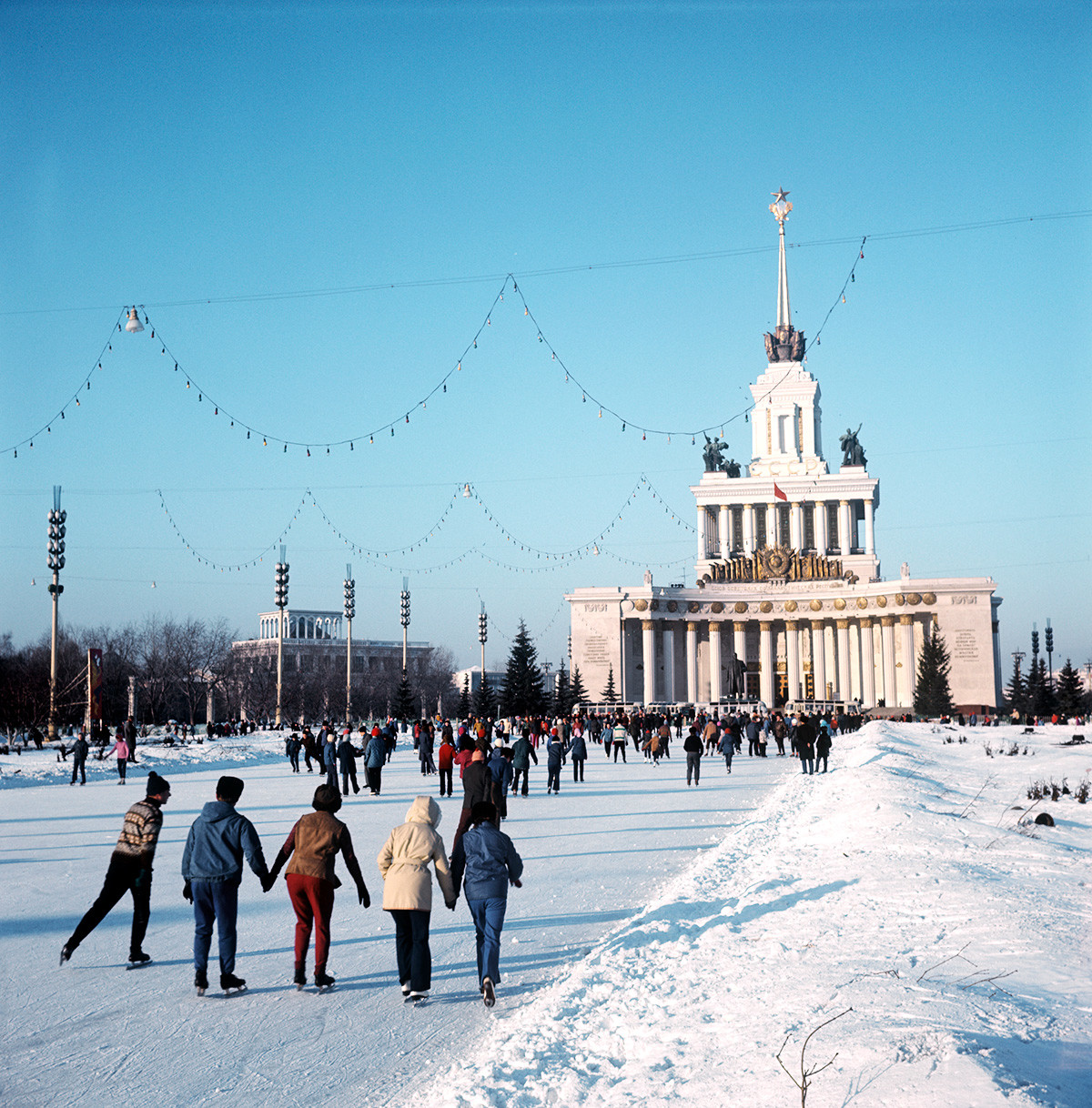 Ice skates were generally available and inexpensive. And so that toddlers, whose balancing ability was still a work-in-progress, weren’t excluded, double-blade strap-on skates were widely available, and most of the kids of the 1970s and 1980s owned them, often before any age that they can clearly remember now.

In the USSR, we didn’t just self-learn to ice skate the best we could. When one does, one ends up pretty much walking on ice, on ice skates - a horrible site we see nowadays in abundance at public ice skating rinks around the world. Most of the children in the Soviet Union were taught to ice skate systematically and properly, through a network of neighborhood and community figure skating schools (and ice hockey schools), that were ubiquitous in all parts of the country where snow and ice were a regular climate phenomenon.

We were taught to skate forwards and backwards, to spin, skate on one leg and skate without taking either foot off the ice. We were taught to break and stop at any speed without falling. For those who did not feel like hockey or pirouettes, we also had speed-skating schools. But even before all that, we were taught to fall. The first month or so in an ice skating school was dedicated entirely to falling without cracking your skull - the skill that must have saved many lives off the ice rink as well.

Figure skating was also the source of international pride. The Soviet Union won numerous Olympic medals in speed skating, figure skating and ice hockey. We won the ice hockey world cup in 1973, 1979 and 1986. Figure skating was where we really dominated the ratings and charts, with Irina Rodnina alone having won 10 world championships and 3 Olympic gold medals. The USSR, and subsequently Russia, won gold in figure skating – be it singles, pairs or ice dancing – in all Winter Olympic games from 1964 to date, excluding the 2010 games in Vancouver, in which we only managed silver. 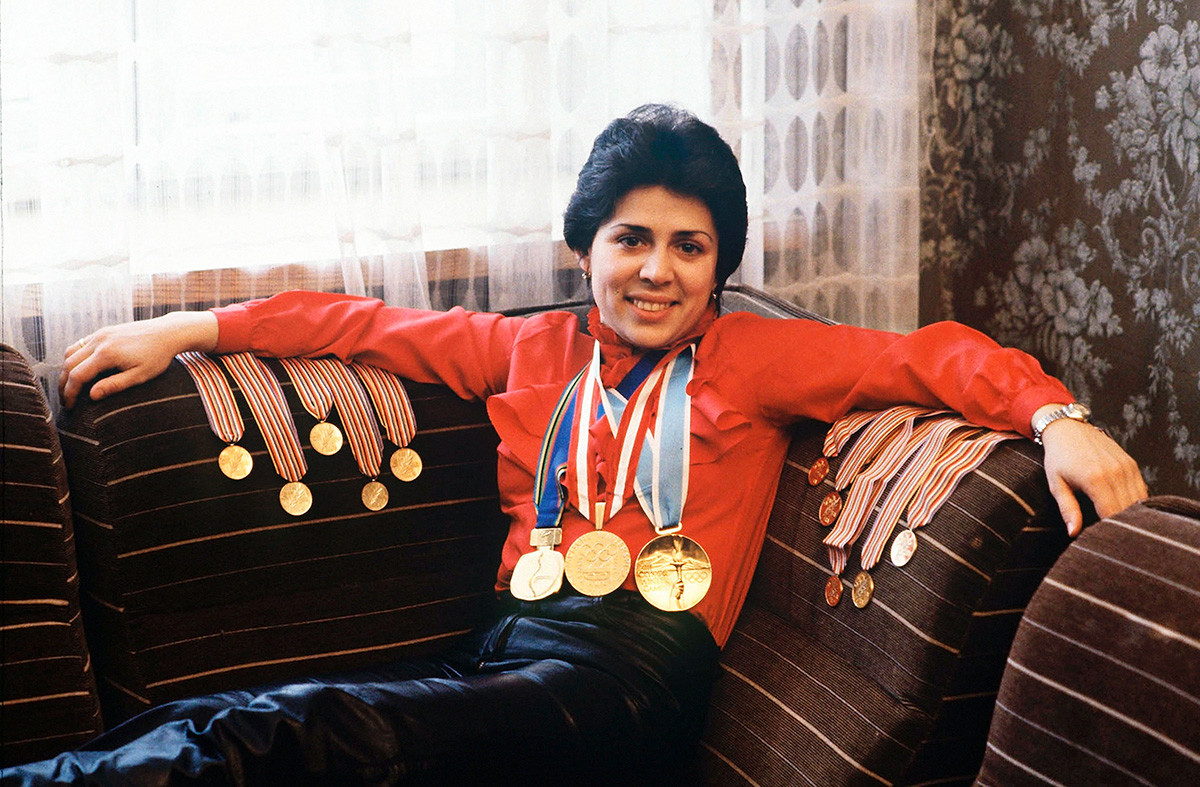 The successes of the Soviet years were not achieved in a vacuum. Figure skaters and ice hockey players who rose to the top did so from the numerous ranks of skaters at regional and municipal level and those who would forever stay amateur knew their way around the ice and would continue to follow the sport affectionately. It was necessary to have tens of thousands of aspiring athletes in order to identify and pick the most able among them through to the top. Under that model, if any talented future athlete was born, they had a fair chance at actually training properly and succeeding in one of the sports.

The reason almost all 5-year-olds were enrolled into figure skating or ice hockey schools – and the reason those schools were so ubiquitous and accessible – was precisely in the competitive culture of Soviet sport. Before we let little Olga or Ivan set their sights on the violin, biology or space travel, we needed to make sure they were not being overlooked as possible future Olympians. For some, it became clear that they were not competition material - we let them have the violin then, but they did not un-learn the basics of ice skating (or falling) and retained it as a life-long recreational skill. The others would compete at neighborhood, school, district and municipal levels, from which they could be noticed and scouted for the big leagues. 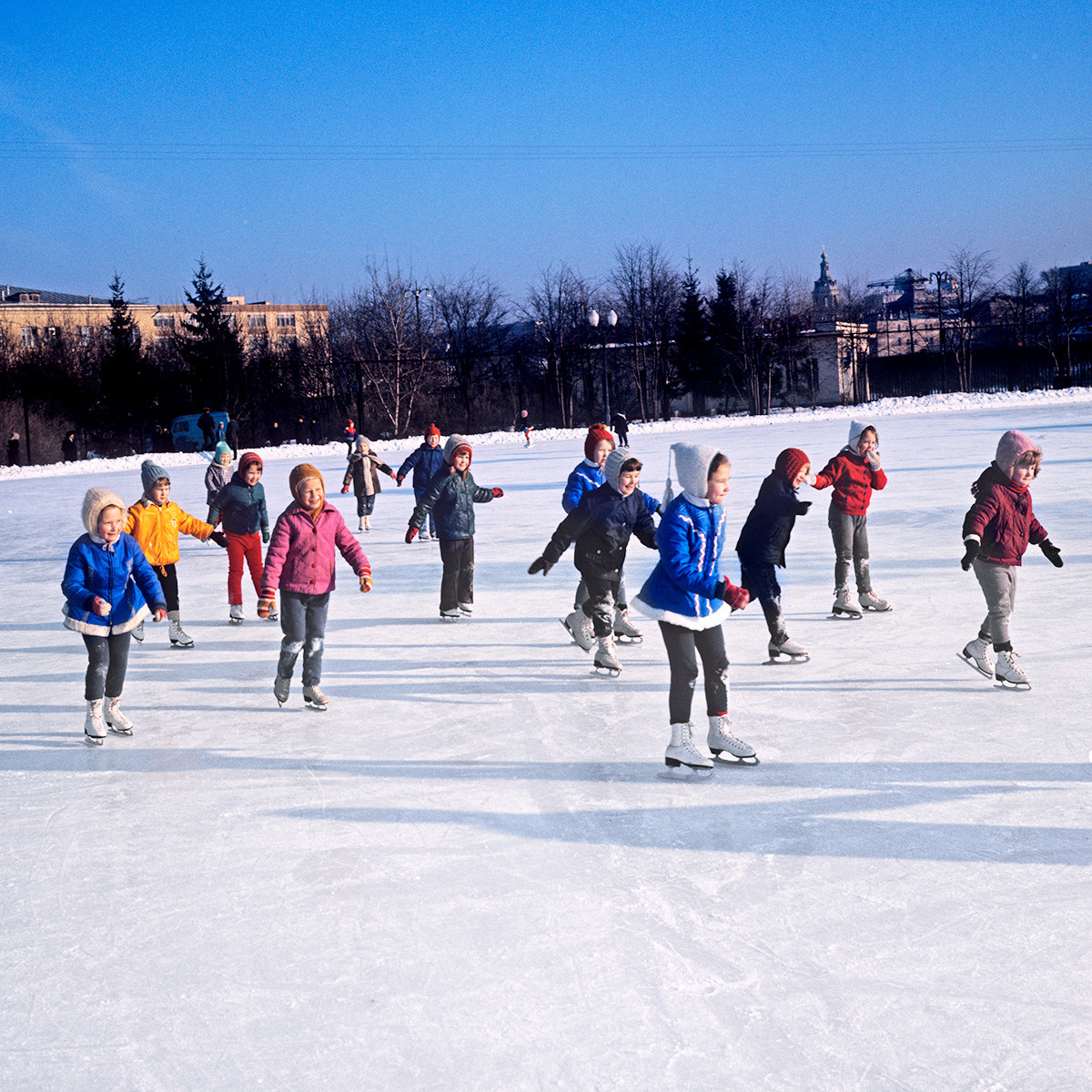 Sport for the few, entertainment for the many

This is not how winter sports play out in many other countries, where few professionals rise to the top, but the masses, by and large, cannot skate.  The United States, for example, are very successful in international figure skating, but less than 3% of their population participates in the sport. Despite the success of the NHL, less than 0.5% of Americans play ice hockey.  This suggests that climate has a lot to do with the mass popularity of winter sports. Only a small part of the United States regularly has snow in winter. At the same time, according to Canadian media, 32% of all Canadians can and do, at least occasionally, skate on ice or play hockey. The winter weather there is quite similar to Russia.

After a dip in mass participation in sports and disintegration of much of the system of athletic training following the dissolution of the Soviet Union, the Putin government, laudably, renewed the efforts to re-popularize winter sports among the masses. Public skating rinks are now everywhere, and many are free. There is one annually on the Red Square. The VDNKH exhibition grounds are now home to the largest ice skating rink in Europe. We have a version of Skating with the Stars, as well as regularly touring “on ice” versions of many popular shows and ballets. 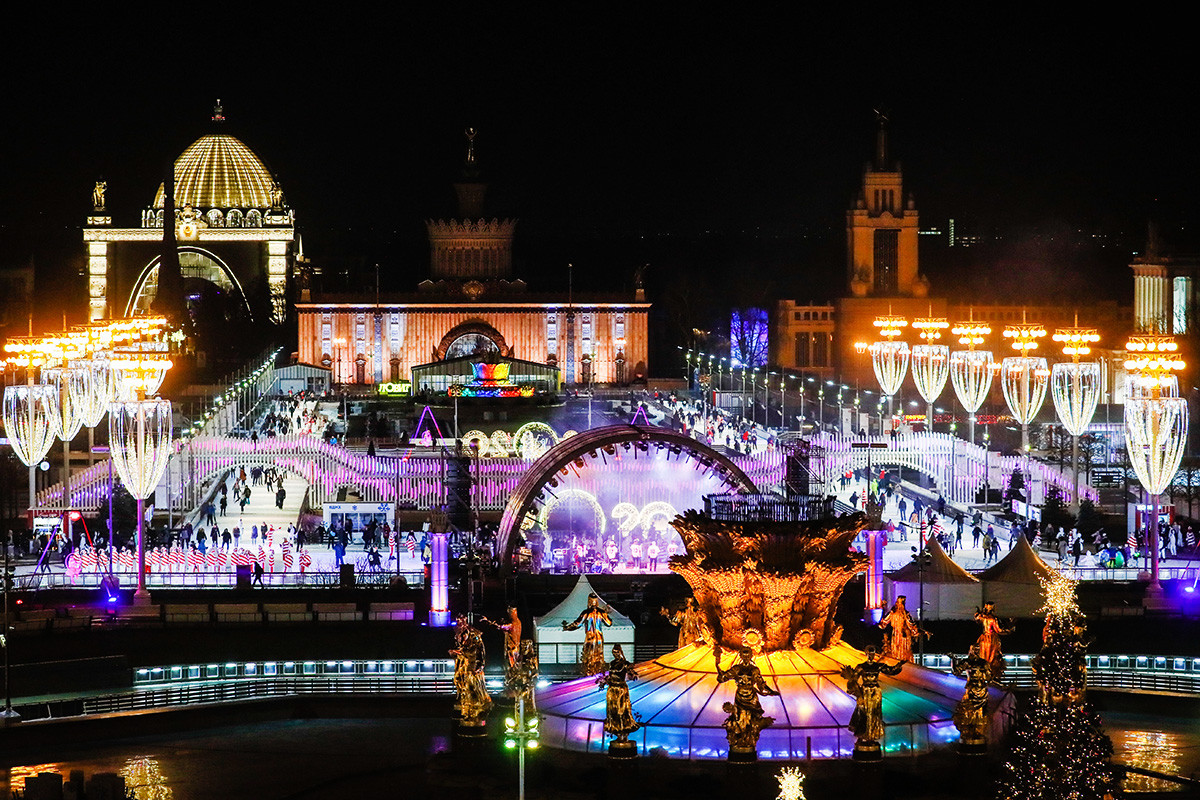 Yet, the nature of the Russian public’s interest in figure skating and hockey has shifted from what it was in the Soviet years. From mass participation in systematic achievement-oriented sports, the focus is now not so much on looking for future Olympic talent, as it is on recreation. The generation born in the 1990s was not taught to properly ice skate en masse - for them, ice-walking around the Red Square in the evening between glasses of mulled wine, and falling unsafely, is their way of having fun.

As far as ways of having fun go, this is a popular one. But the popularity of ice skating - as well as ice hockey - as an amateur sport has fallen since the Soviet years. Mass recreational skating on the Red Square is very visible, but, according to a 2018 Russian Public Opinion Research Center (WCIOM) study, only 5% of Russians who regularly engage in amateur sport, practice all winter sports combined - including hockey, figure skating and cross-country skiing. Winter sports share the bottom of the chart. They yield, in no particular order, to swimming, cross-country running, weight lifting and almost anything else. Meanwhile, in equally snowy Canada, ice hockey ranks as the second mass-participation sport among adults, after golf. 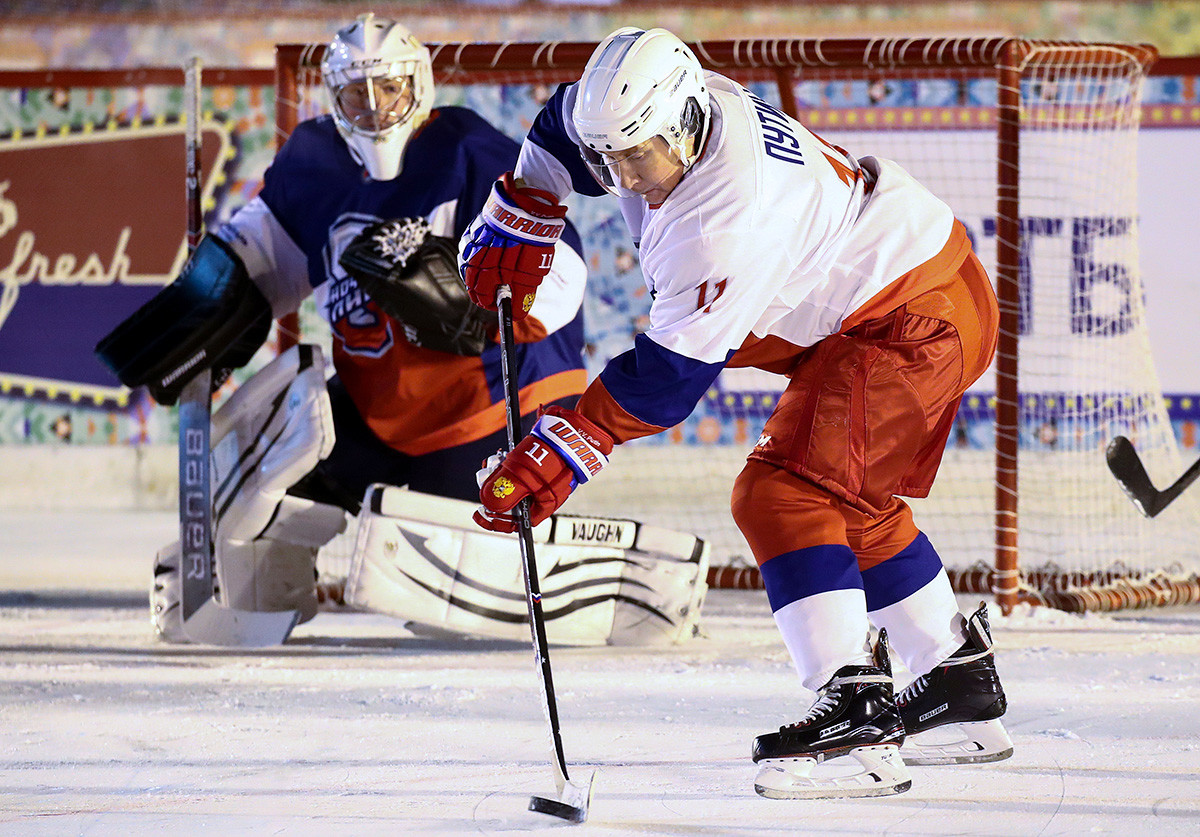 President Vladimir Putin during a match of the Night Hockey League at an ice rink in Red Square, 2018

With his efforts in ice hockey, President Putin has led by example - but even for him, it’s a little late for the Olympics, as well. Fret not though, we still have professional athletes, and they are still doing well. Russia won the ice hockey World Cup in 2008, 2009, 2012, 2014 and 2018. The successful bid for the 2014 Winter Olympics in Sochi was a big boost to the popularisation of winter sports, and to the renewal of sports patriotism. The whole country held their breath as they watched figure skater Adelina Sotnikova’s gold medal performance in Sochi.

On the surface, ice skating among the masses is as popular as it ever was, even though our top athletes today are not a tip of the iceberg of tens of thousands of athletes at lower levels, but a product of a more western-like system of rigorous and expensive training. They are still the heroes of our nation - the nation that is still on ice, even if most of it is stumbling along in rented skates while holding the mulled wine.