Before and after: What Moscow looked like a century ago, and now (PHOTOS) 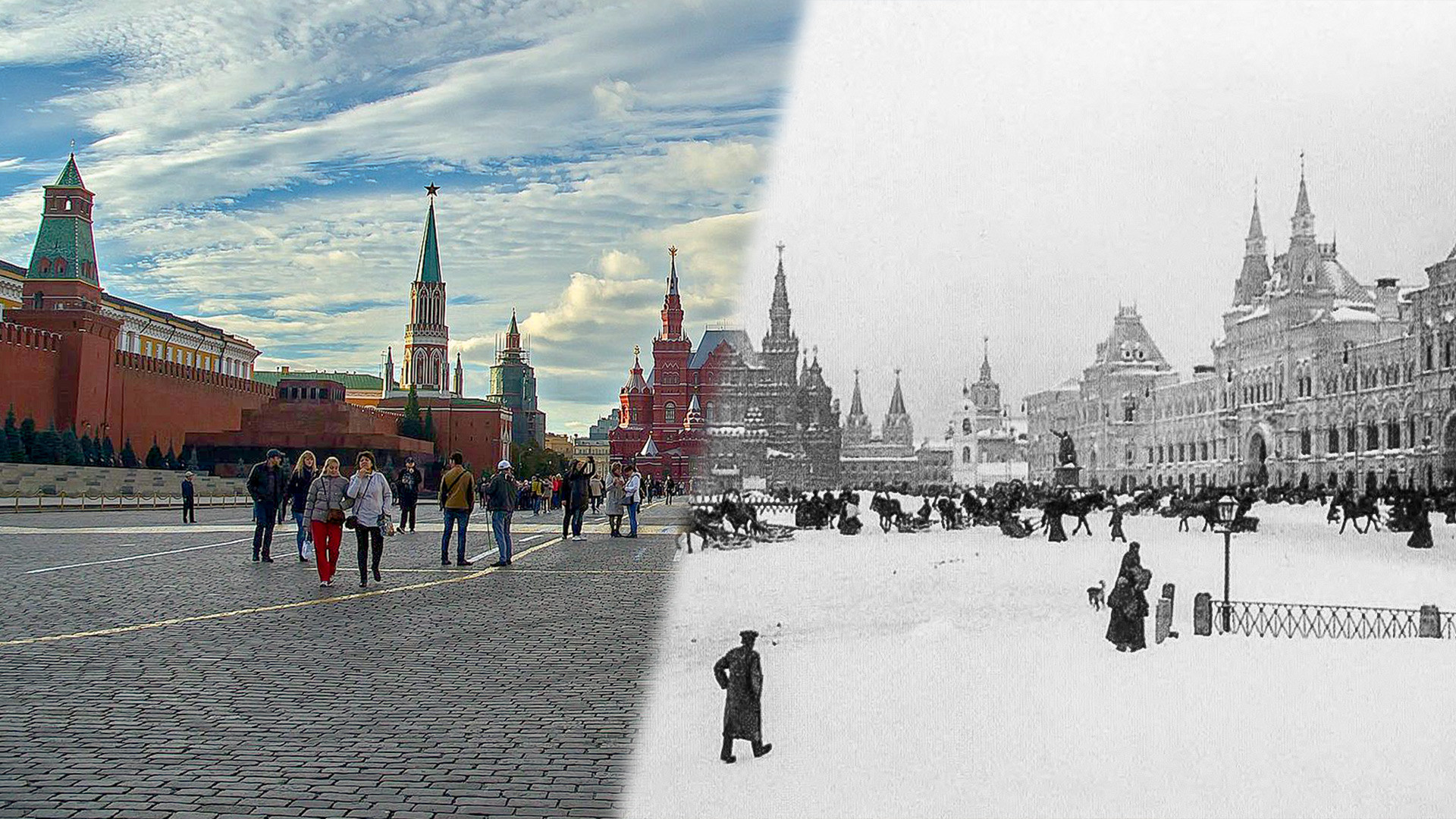 Uwe Brodrecht (CC BY-SA 2.0); mosfo.ru
The Russian capital still has pockets of antiquity, and even the odd 19th-century wooden house. Yet its appearance has changed almost beyond recognition. 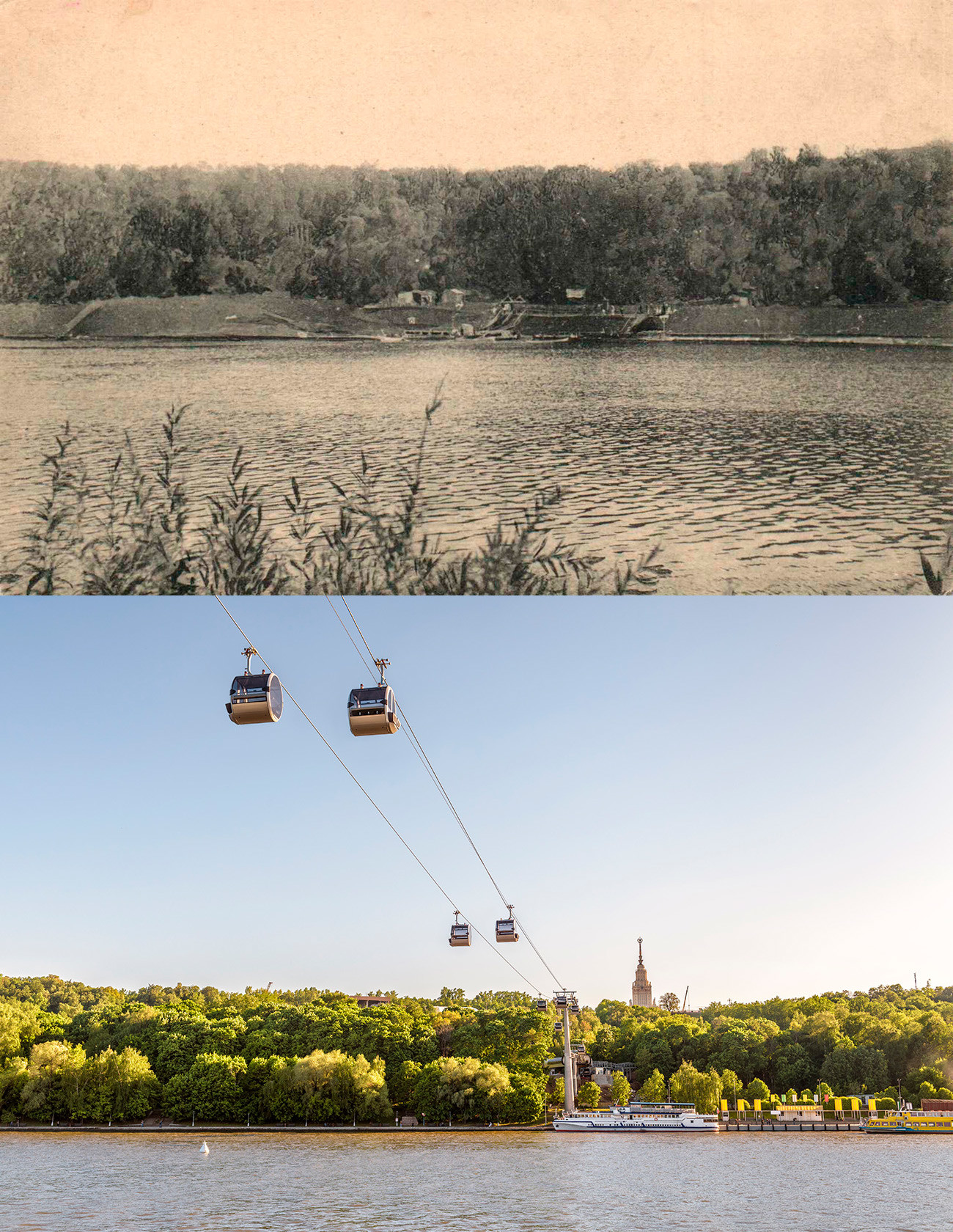 These days, it is a fashionable promenade lined with cafes, a stone’s throw from Moscow State University. But a century ago, it was home to a village and an unpopulated riverbank. 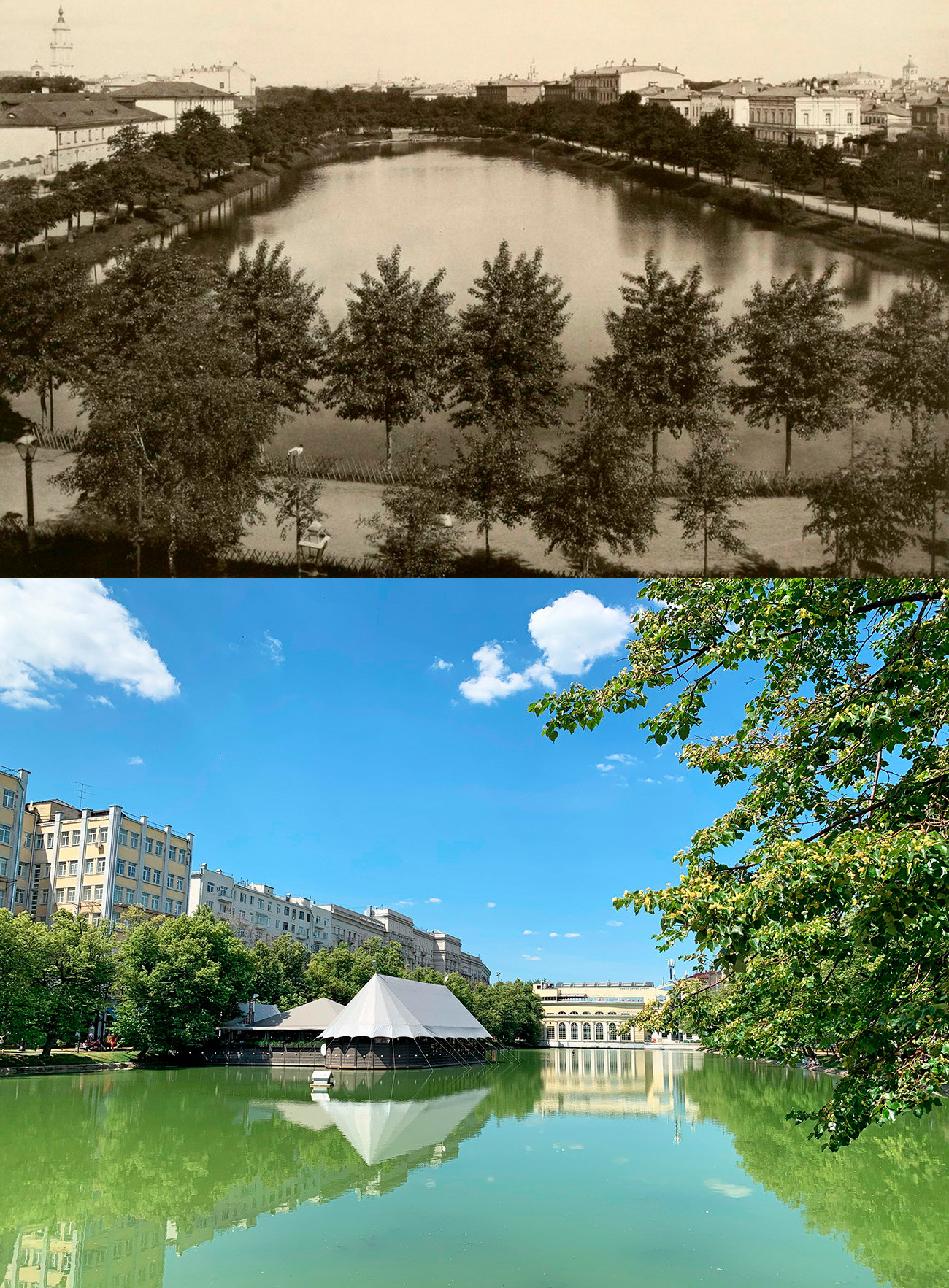 These ponds in central Moscow were once very dirty, and hence bore the epithet “filthy.” But ever since being cleaned in the 18th century, they have been a favorite haunt of all Muscovites. There is boating in summer and skating in winter.

3. The Kremlin. View from the Cathedral of Christ the Savior (1871) 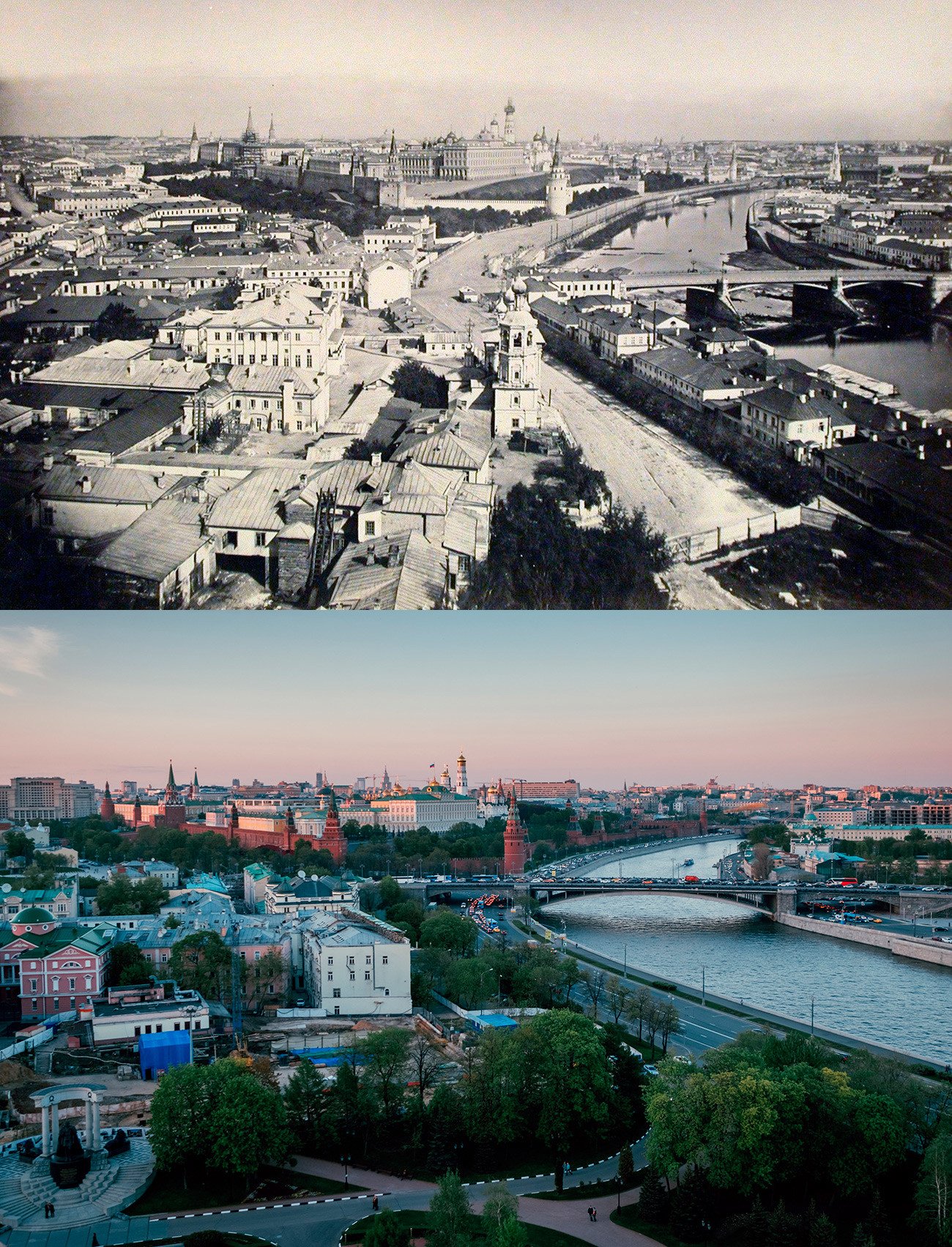 The Kremlin is still the same, but the buildings and even bridges in the vicinity have been given a facelift. As for the Cathedral of Christ the Savior, from which this photo was taken, it was demolished by the Soviet authorities and rebuilt only in the 1990s. 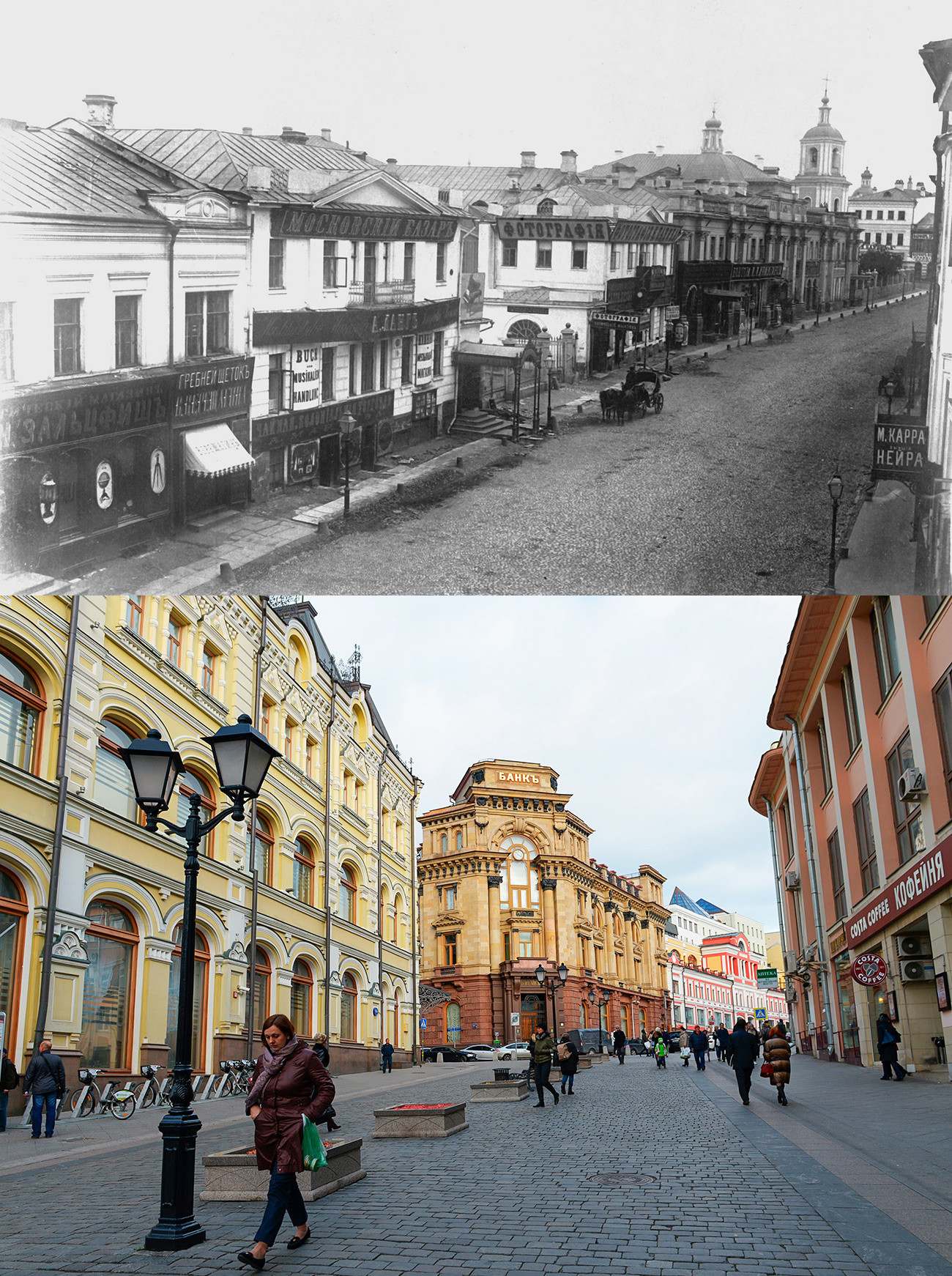 Once there was a stone bridge over the Neglinnaya River, but back in the early 19th century it was piped underground, so there is no bridge here today, and nor was there a hundred years ago. Then and now, Kuznetsky Most (which means “Kuznetsky bridge”) is wall-to-wall stores and restaurants. 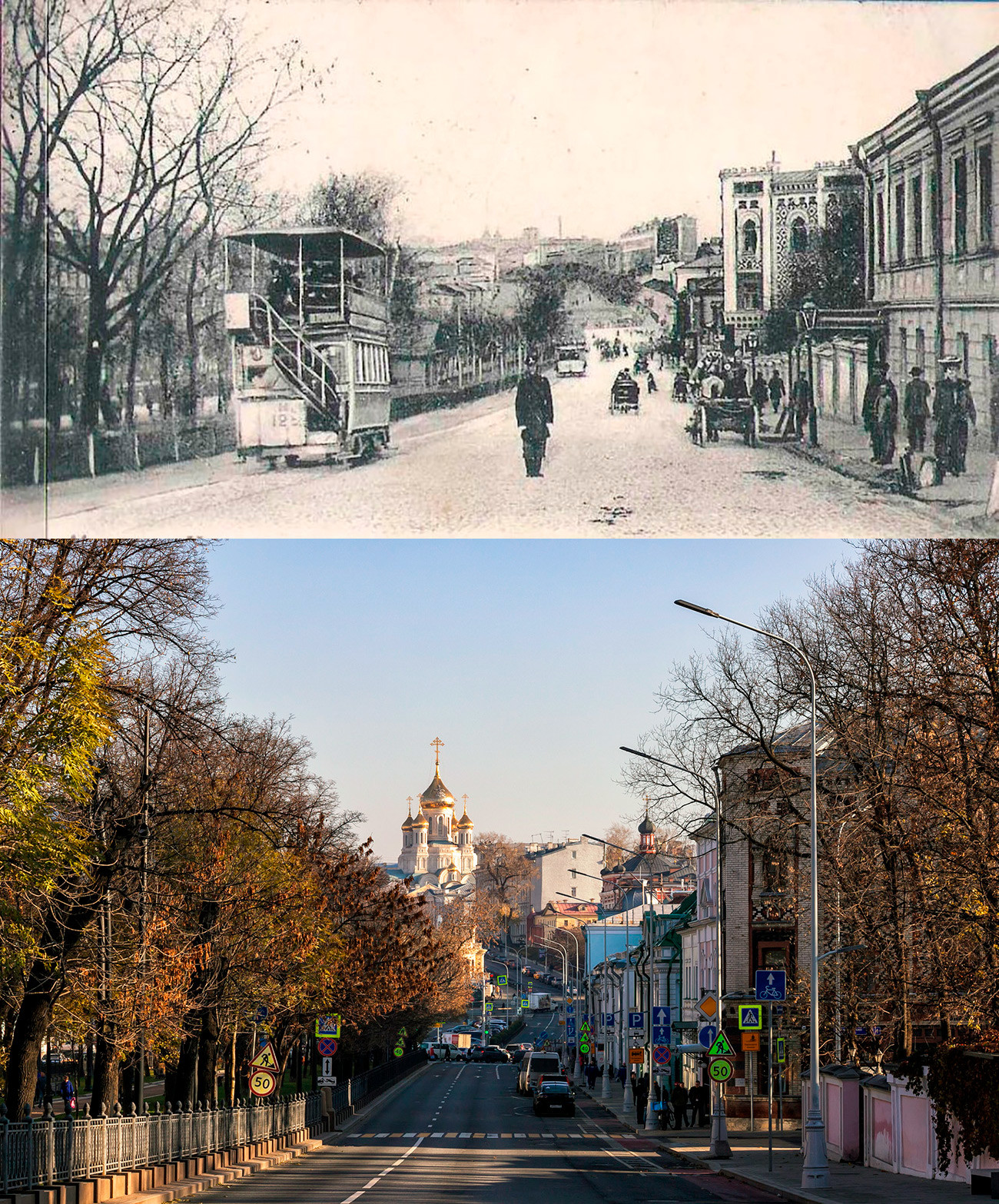 Did you know that double-decker trams once plied the streets of Moscow?! Not for long, however, since they often derailed and were inherently unsafe. 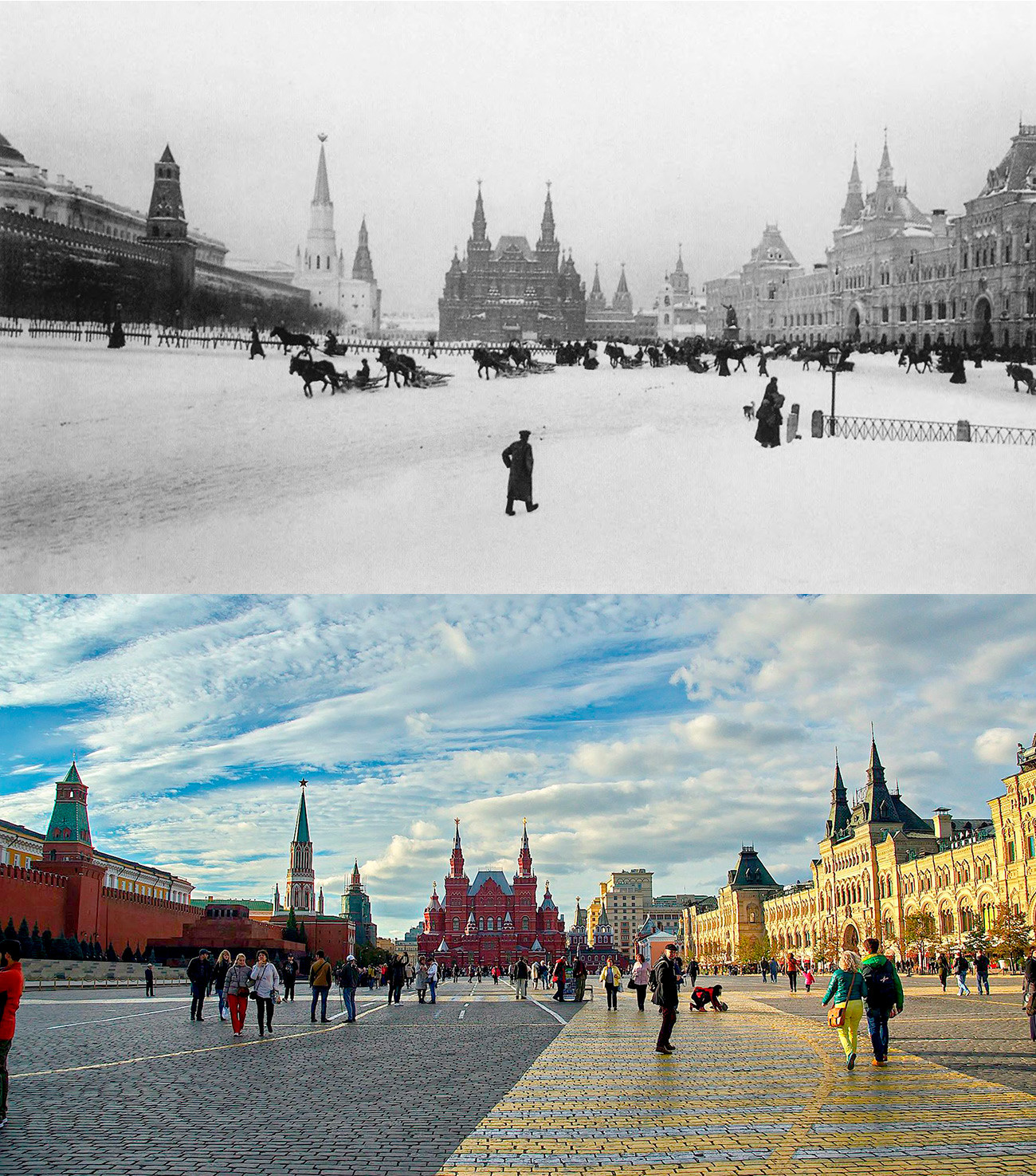 Red Square has seen minimal tinkering round the edges… oh, plus the mausoleum. 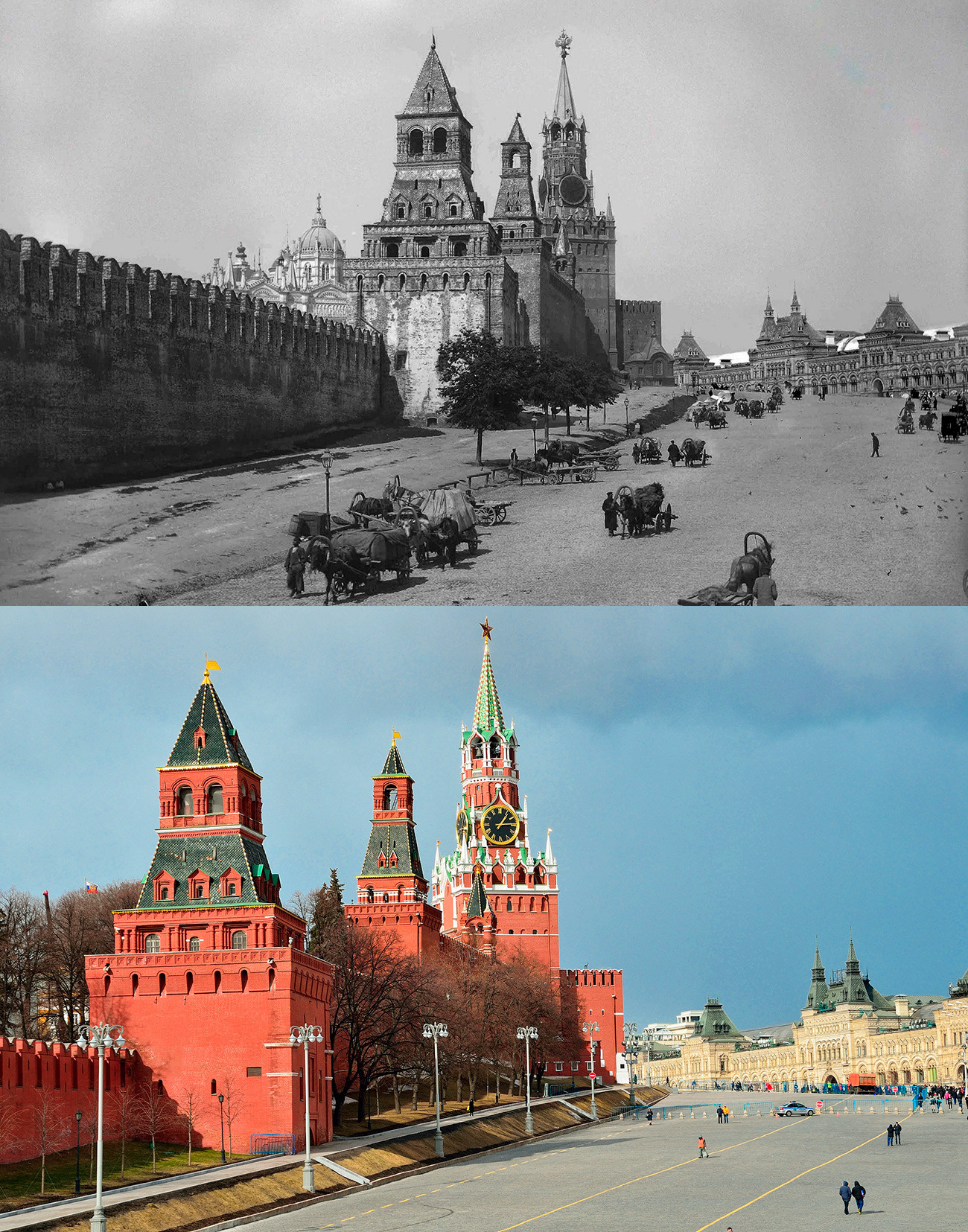 Vasilievsky Spusk (“Basil’s descent”) is a continuation of Red Square that slopes down to the embankment of the Moskva River. St Basil’s Cathedral is out of the frame in this shot, but don’t worry, it’s there somewhere on the right. 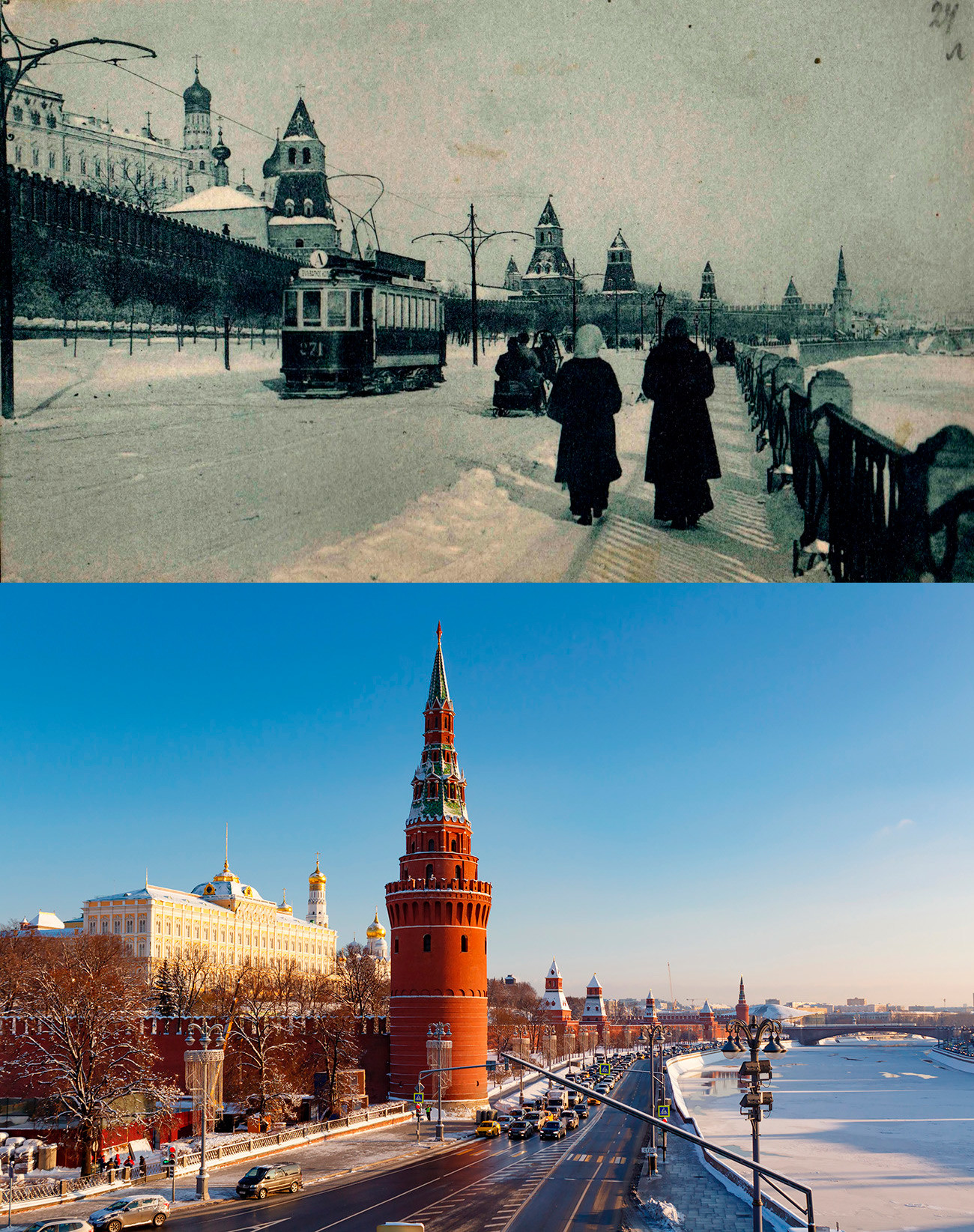 Trams no longer trundle past the Kremlin. They’ve been replaced by cars, which most of the time don’t move at all. 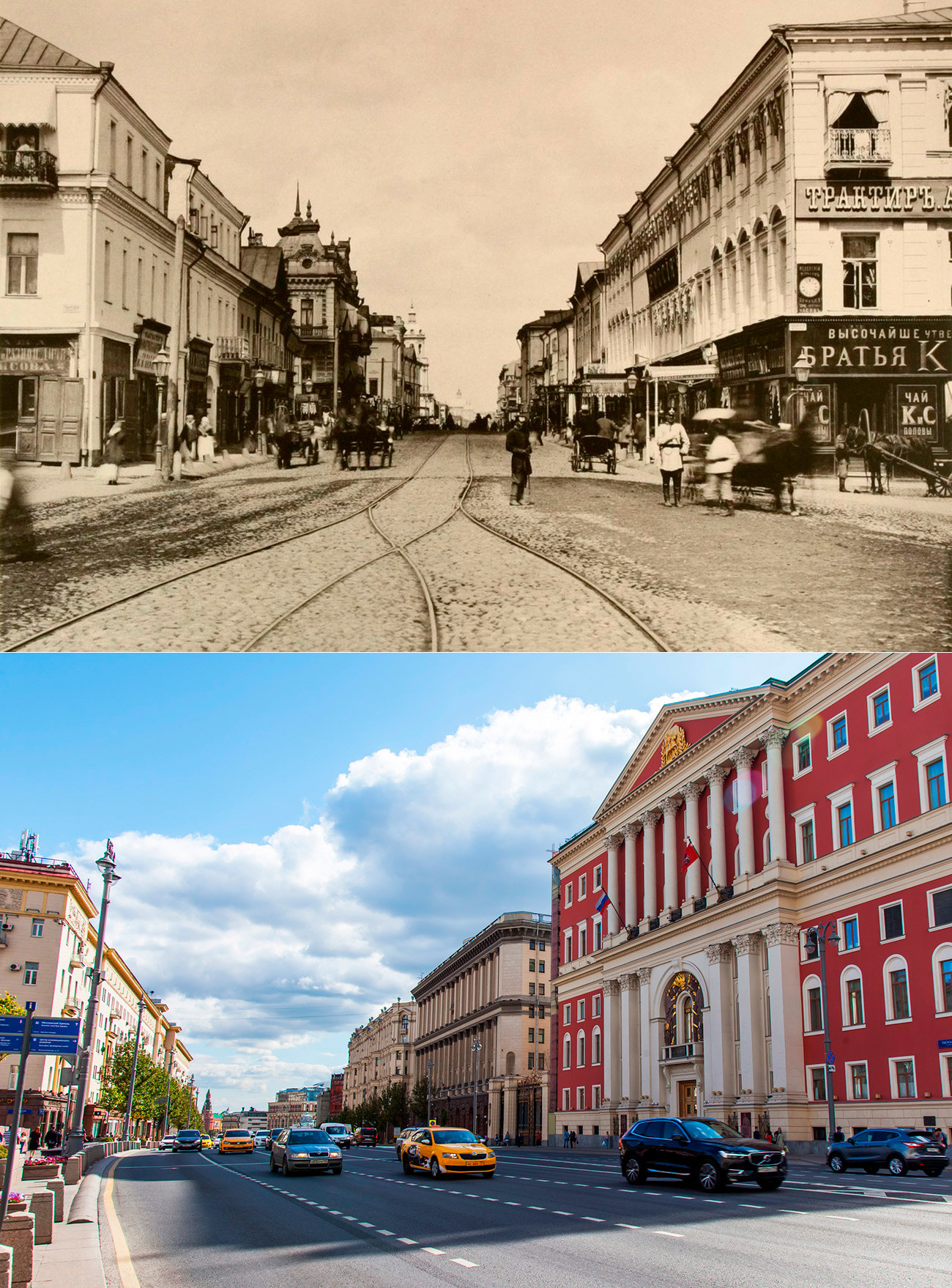 In the 1930s and 40s, Stalin implemented his “General Plan for the Reconstruction of Moscow,” which included mass housing development and construction of bridges and the famous metro. It was also deemed necessary to significantly widen Moscow’s main thoroughfare — Tverskaya (in Soviet times, Gorky) street. Many buildings were demolished, and some were literally moved... (See here for details of how Stalin’s architects relocated buildings) 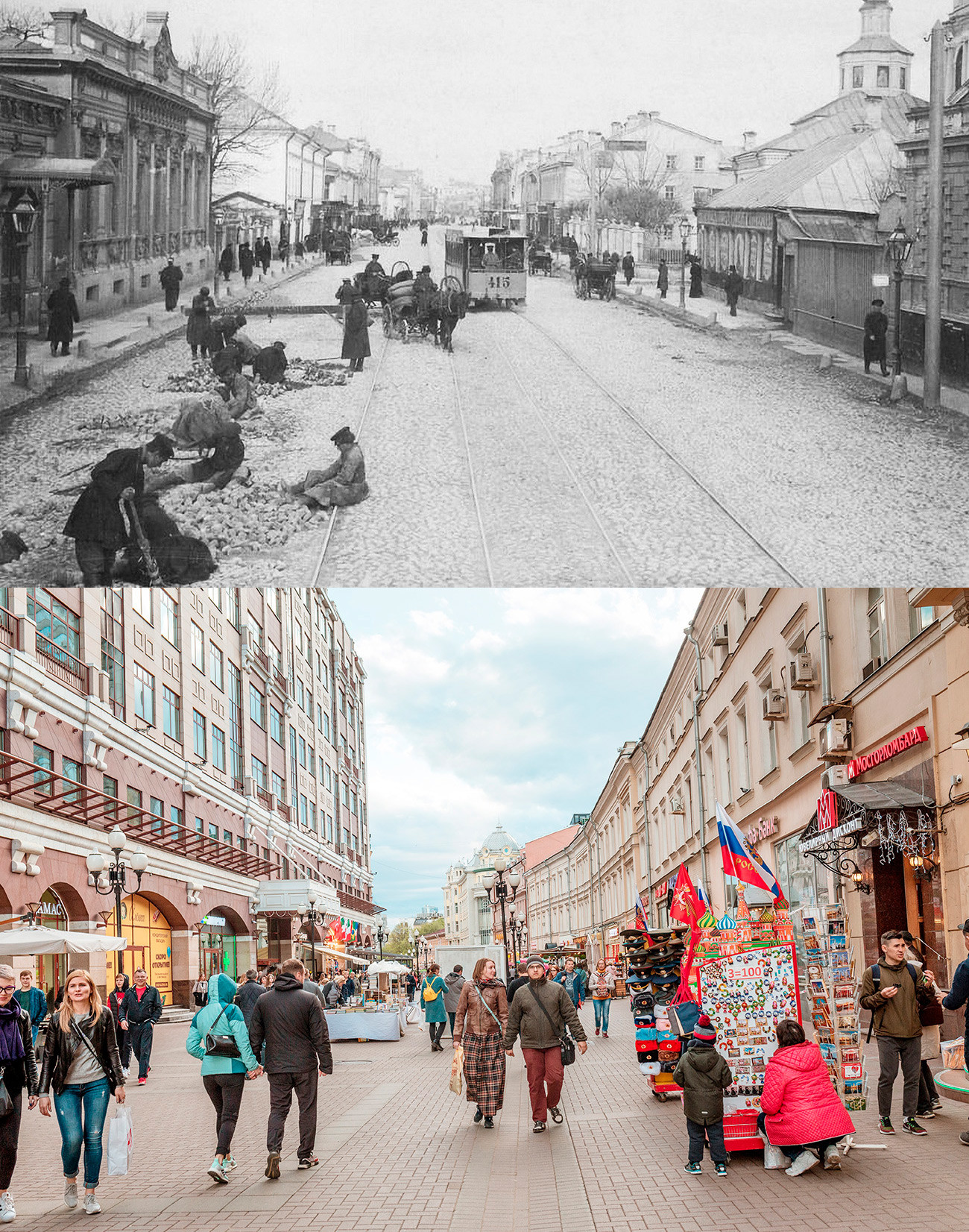 Electric trams first appeared on Old Arbat street in 1908, replacing the horse-drawn rail cars that had been in use for the previous 30 years or so. Today, the street is completely pedestrianized. Time was when it was buzzing with creative energy, home to artists and bohemians, but these days it is practically an open-air museum, full of theaters, apartment museums, and monuments. 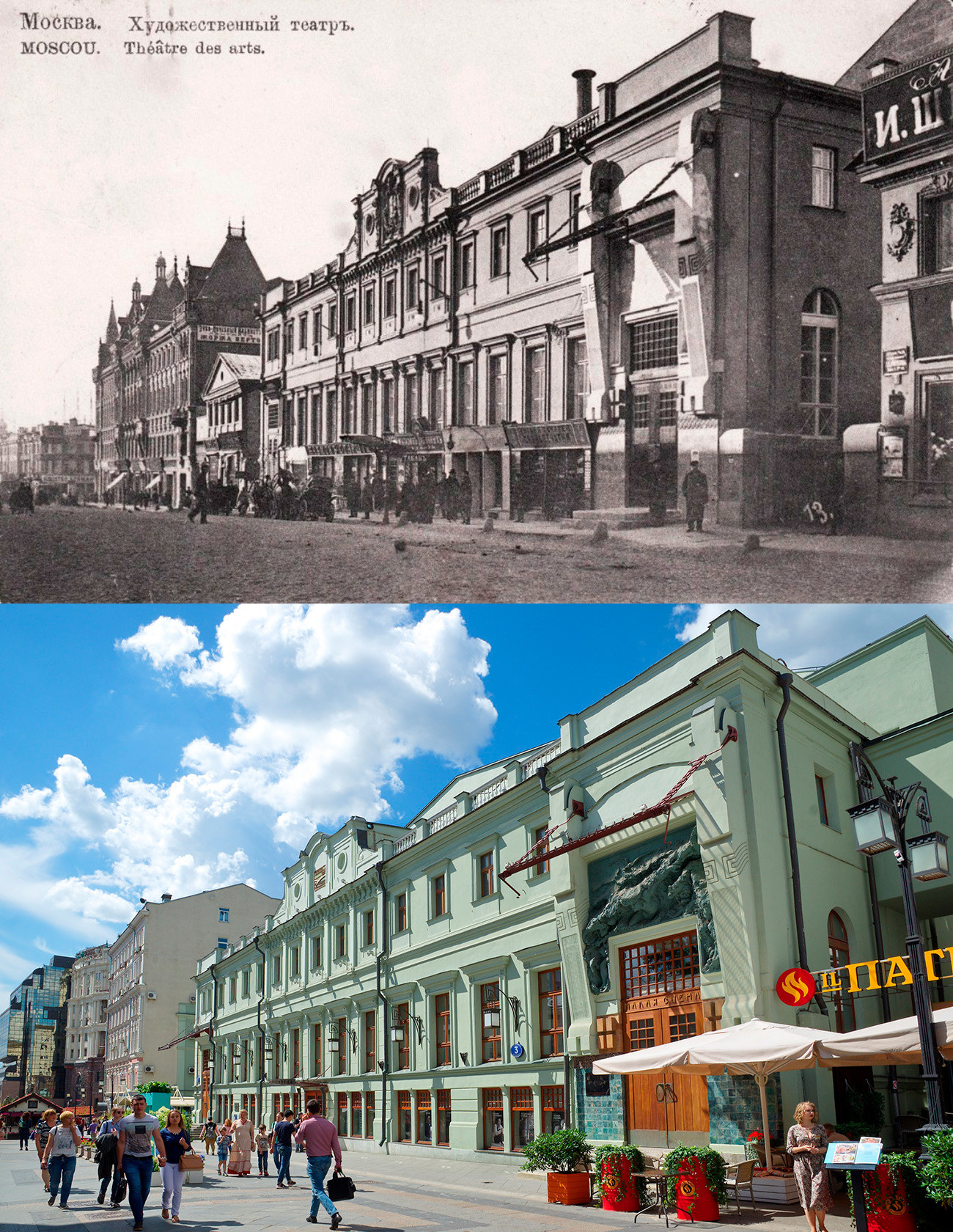 The theater where the famous director Konstantin Stanislavsky staged plays by Anton Chekhov remains popular to this day. Performances are often attended by the Moscow elite. The lane on which it stands is now a trendy pedestrian area boasting numerous restaurants and summer verandas, plus incredible street lighting and decor all year round. 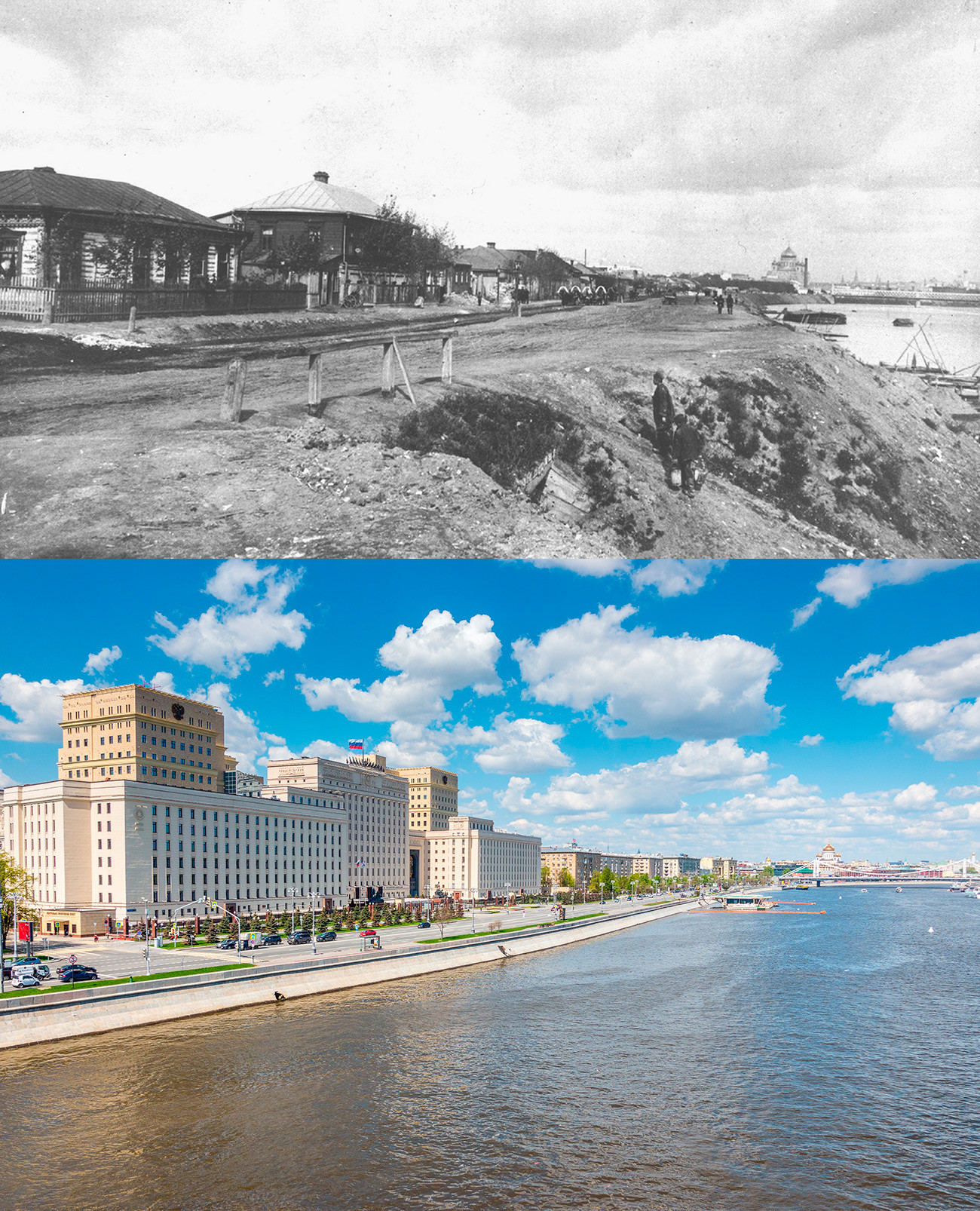 Under Stalin’s general plan, the embankment was turned into a parade area, and elite houses were thrown up, not to mention the Ministry of Defense building. The original Cathedral of Christ the Savior is visible in the distance.