10 most beautiful mosaics of the Moscow Metro (PHOTOS) 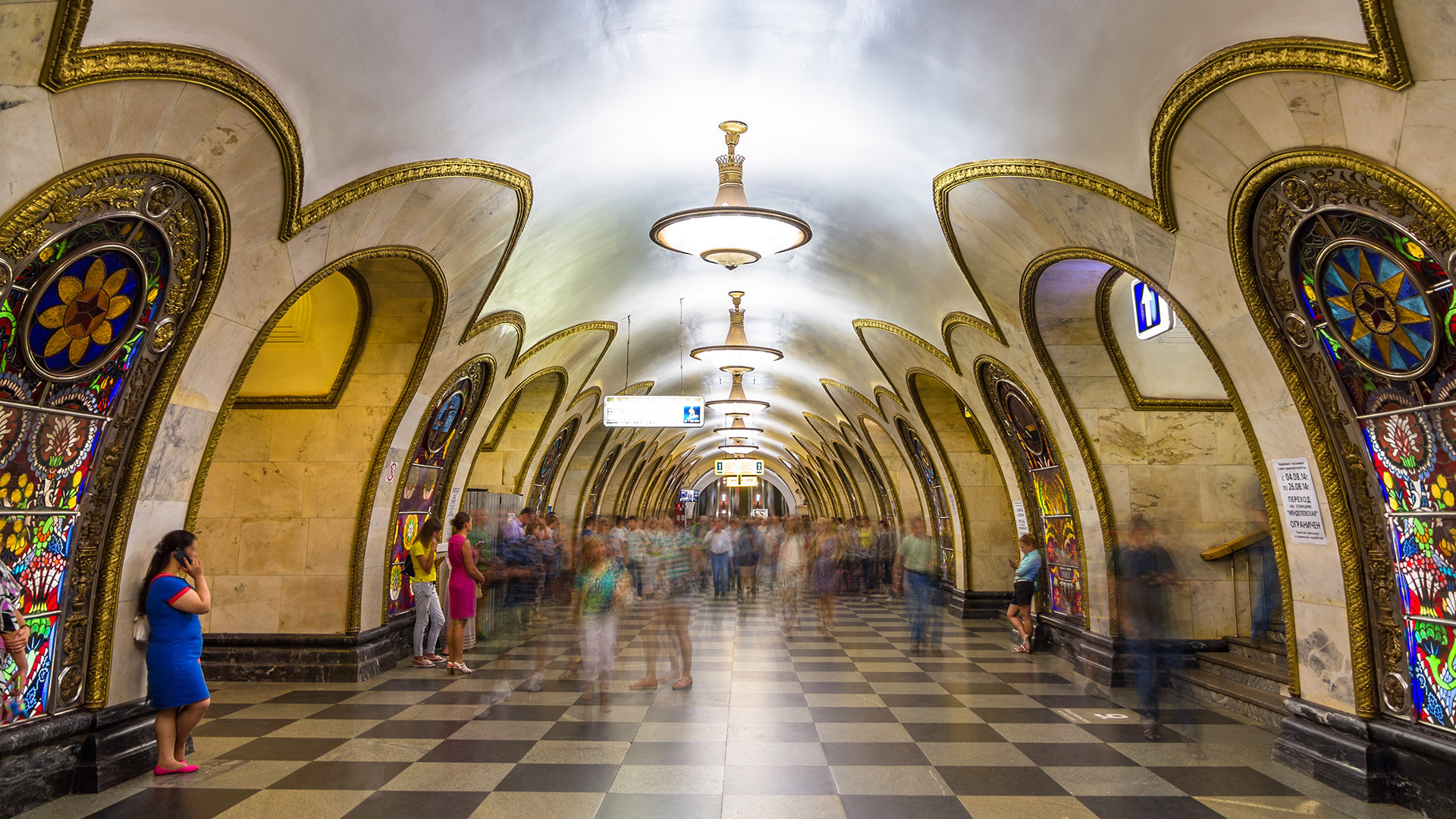 Legion Media
Moscow subway users are so used to the splendors of the “world’s largest underground museum” that they have become blind to them. Yet the ceilings and walls of its stations and vestibules conceal some truly incredible works of applied art.

Disclaimer: It’s best not to stand admiring these masterpieces at rush hour, or you might get swept away by the mad throng of commuters. 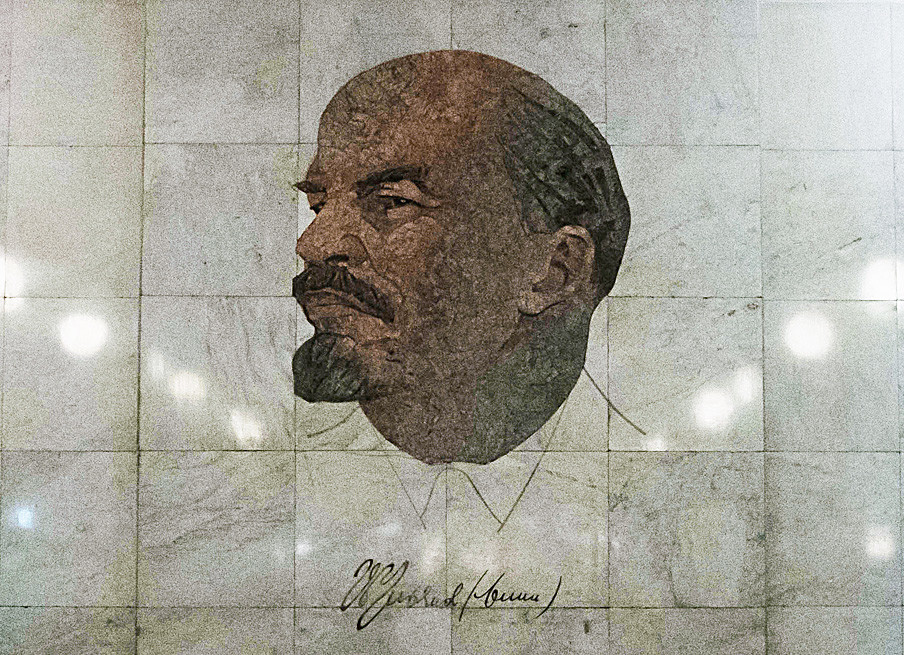 This is one of the oldest stations of the Moscow Metro (originally called the Lenin Metro). No surprise then that it features a huge portrait of the leader of the revolution, and a superb work of art at that. The station opened its doors in 1935, yet the mosaic appeared only 30 years later, created by artist Grigory Opryshko.

Another work by Opryshko is the 12 mosaic panels on the arches of Belorusskaya station on the Koltsevaya (Circle) line. Each depicts scenes of everyday life in Belarus, one of the constituent republics of the USSR. In 1951, in recognition of their masterpiece, the artist and the team of architect designers received the Stalin Prize, the highest possible accolade.

One of the mosaics, known as “Embroiderers,” originally included a portrait of Stalin, but during the de-Stalinization period it was replaced with the Order of the Red Banner of Labor (hammer and sickle). This was not the only image of Uncle Joe to be removed, as we’ll see below.

This is one of the most beautiful subway stations in Moscow, and the world. The lobby was decorated in 1938 with mosaics by socialist realist artist Alexander Deyneka. The plafonds (ornate ceilings) of the central domes boast 34 cobalt blue panels. The cycle is called “24-Hour Soviet Sky” and depicts what a Soviet person might have seen when gazing upwards: airplanes over the Kremlin, high divers, parachutists, and other scenes of Soviet ideology.

It is worth traveling three stations south of Mayakovskaya on the green line to admire another series of ceiling mosaics by Deyneka. Created in 1941, these octagonal panels also give the feeling that you are looking directly at the sky. The theme is industry and progress, with depictions of machine-building plants, aviation, a parade of athletes, and the triumph of industrialization. 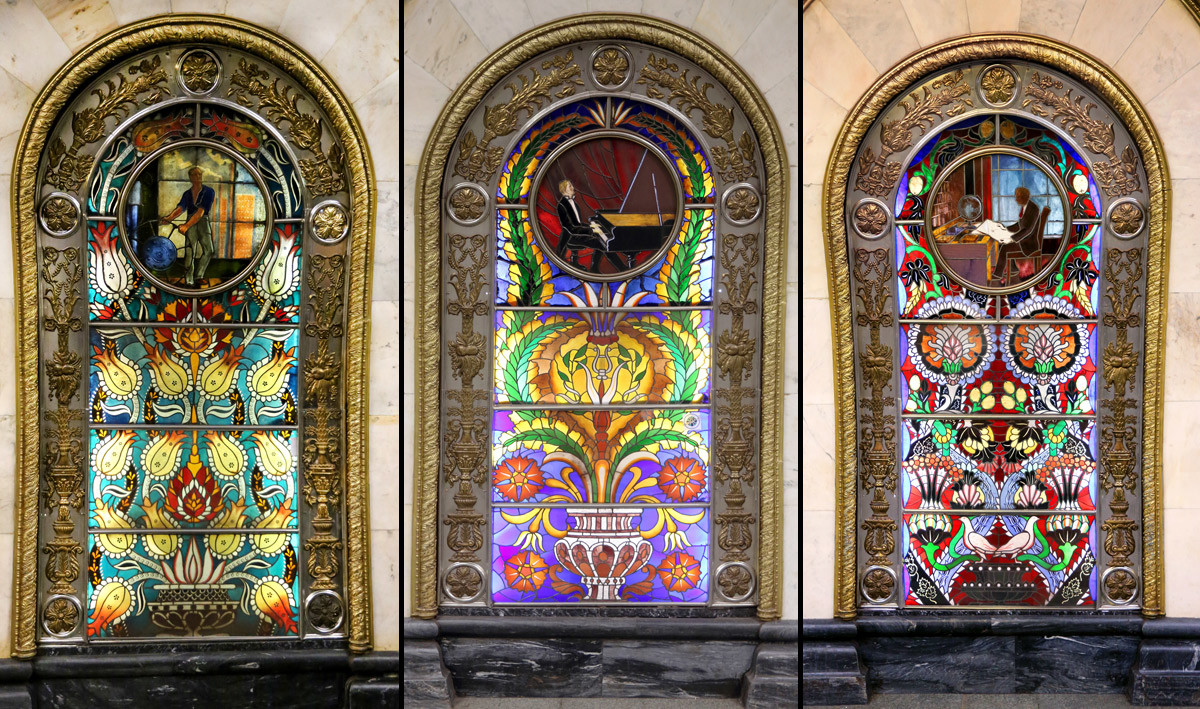 This station is like a fairy-tale underwater world. The side arches feature luminous mosaics of colored glass. Incidentally, the stained-glass windows were made in Riga from the same glass used for Catholic cathedrals, according to the drafts of Soviet artist Pavel Korin. They depict fanciful plants and stars, as well as representatives of different professions: scientists, artists, musicians. 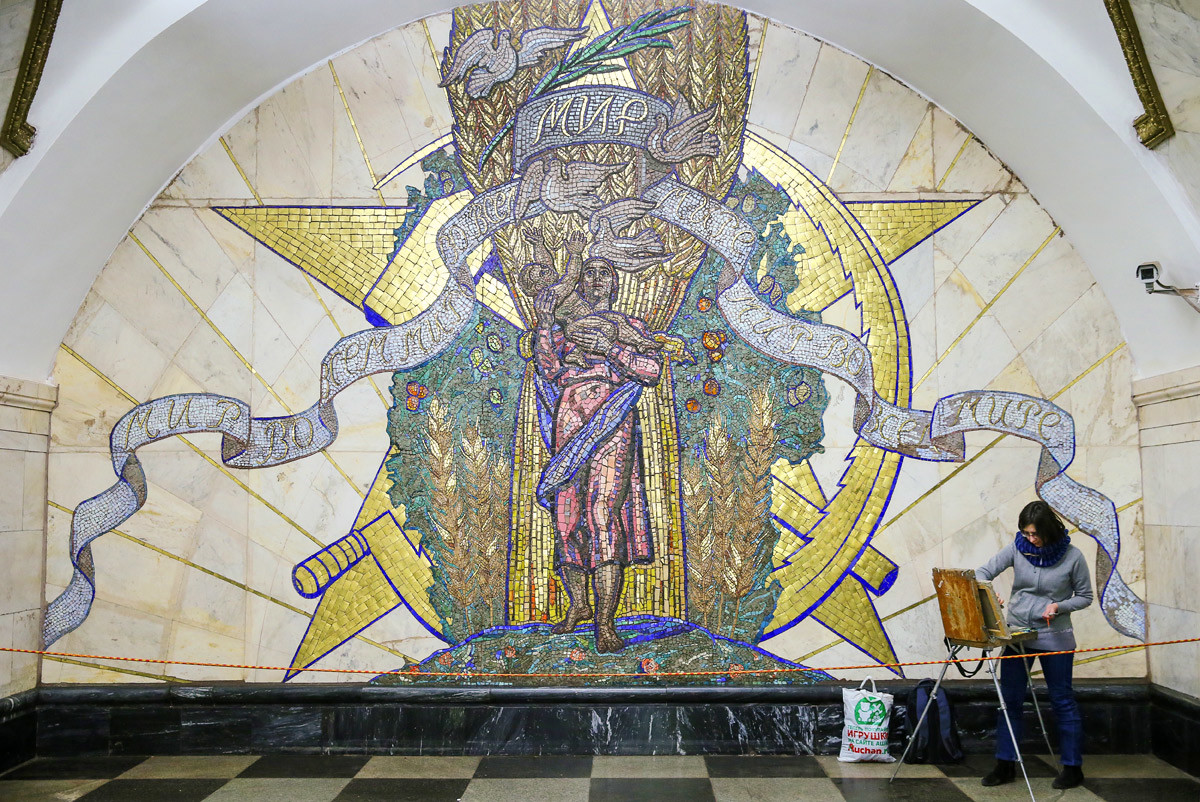 Korin also constructed a cobalt blue panel at the end of the hall with the inscription “Peace in all the world.” Above the mother-and-child image there was once a medallion with a portrait of Stalin, but under Khrushchev, Korin was ordered to replace Stalin with peace doves. 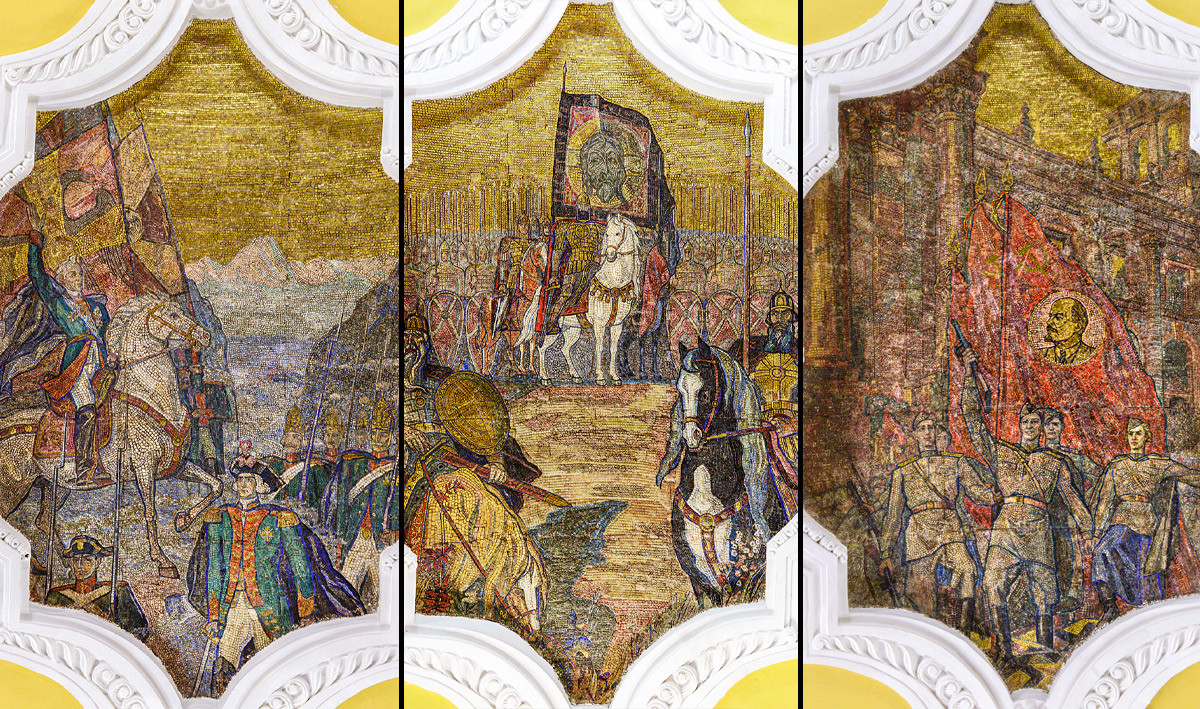 Pavel Korin also decorated Komsomolskaya station on the circle line. Opened in 1952, it was strategically as well as architecturally important, serving passengers at three Moscow railway stations at once, hence it was conceived as a centerpiece. The mosaics here depict patriotic scenes from Russian history: victorious rulers, generals, and other national heroes.

Wait until the train pulls off, and then gaze at the wall mosaics featuring 17 types of non-ferrous minerals native to Russia, from lapis lazuli to jasper. The themes from the works of Anton Chekhov were created using the Florentine mosaic technique by artists Pyotr and Lyudmila Shorchev. 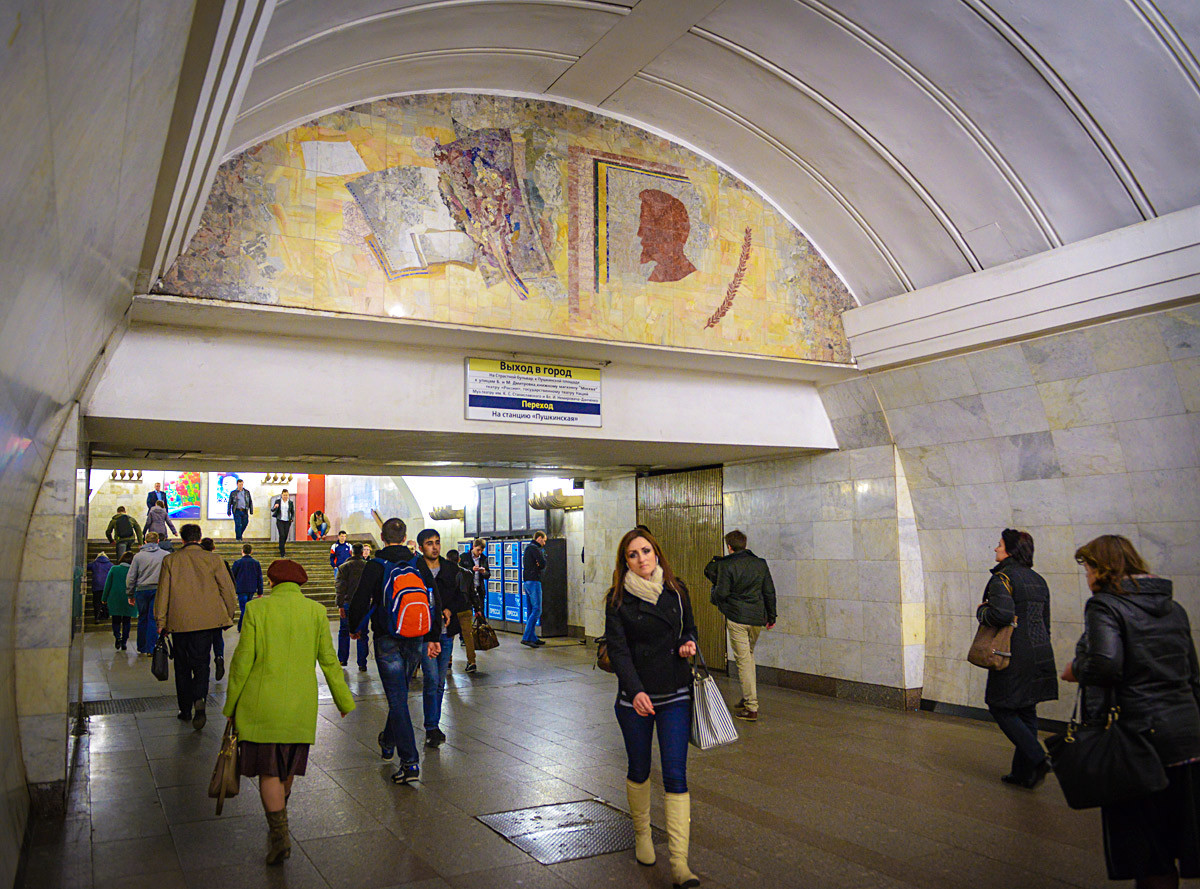 At the exit, the writer himself is depicted in profile.

This station is dedicated to the heroism of the Soviet people during WWII. Inside the station, in 1945, a red banner mosaic was inlaid on the wall with profiles of Stalin and Lenin. In 1963, however, Stalin was removed, and Lenin started looking the other way, perhaps prophetically. 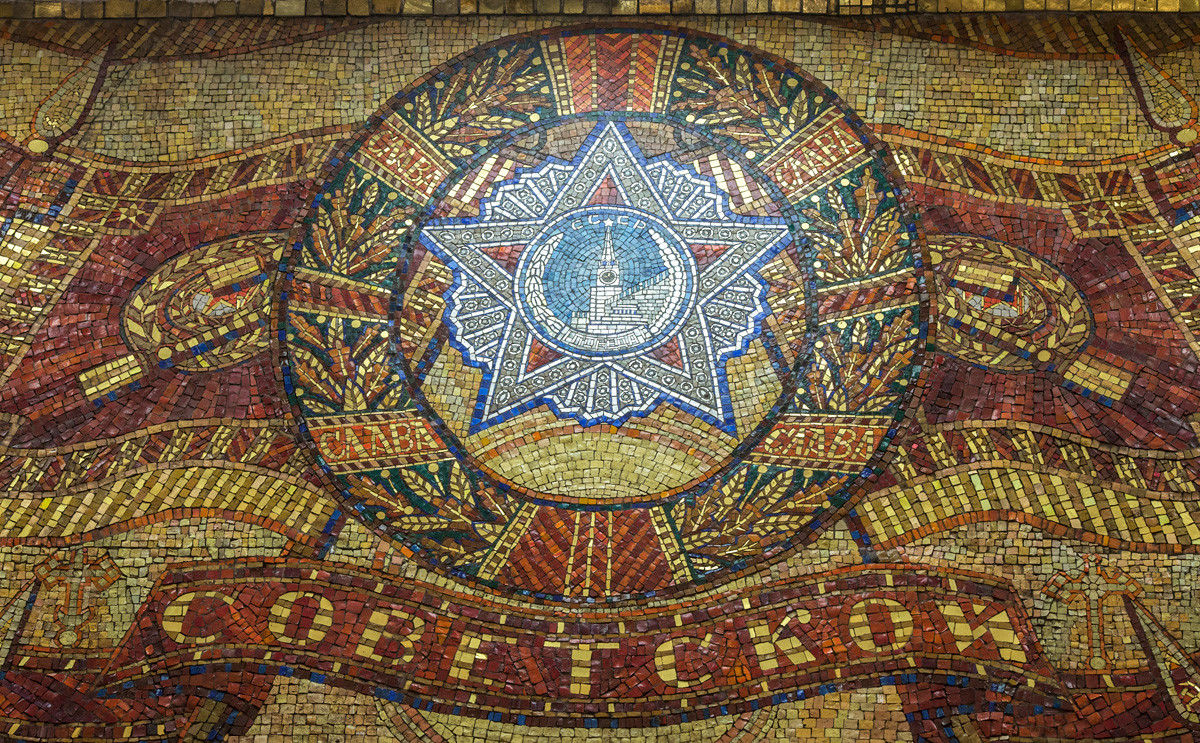 The walkway to the escalators at the station entrance is decorated with the “Glory to the Soviet Army” mosaic, made out of majolica. Legend has it that the artist, Isaac Rabinovich, hid three Orthodox crosses inside it. 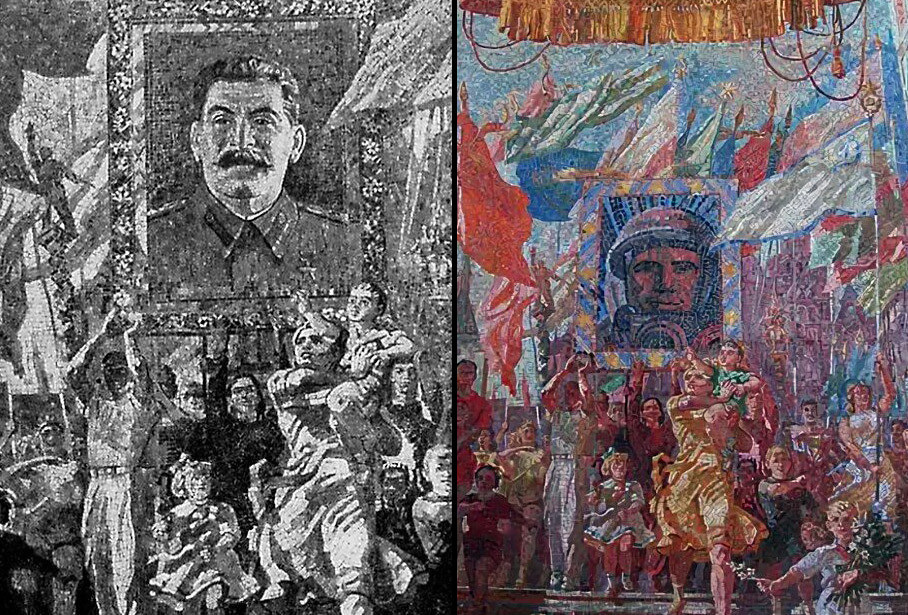 Grandstanding at the top of the station escalator is a mosaic triptych depicting a demonstration with banners and placards. When the station opened in 1950, there was a portrait of Stalin on one of the banners, but after 1961 it was replaced with the image of Yuri Gagarin. 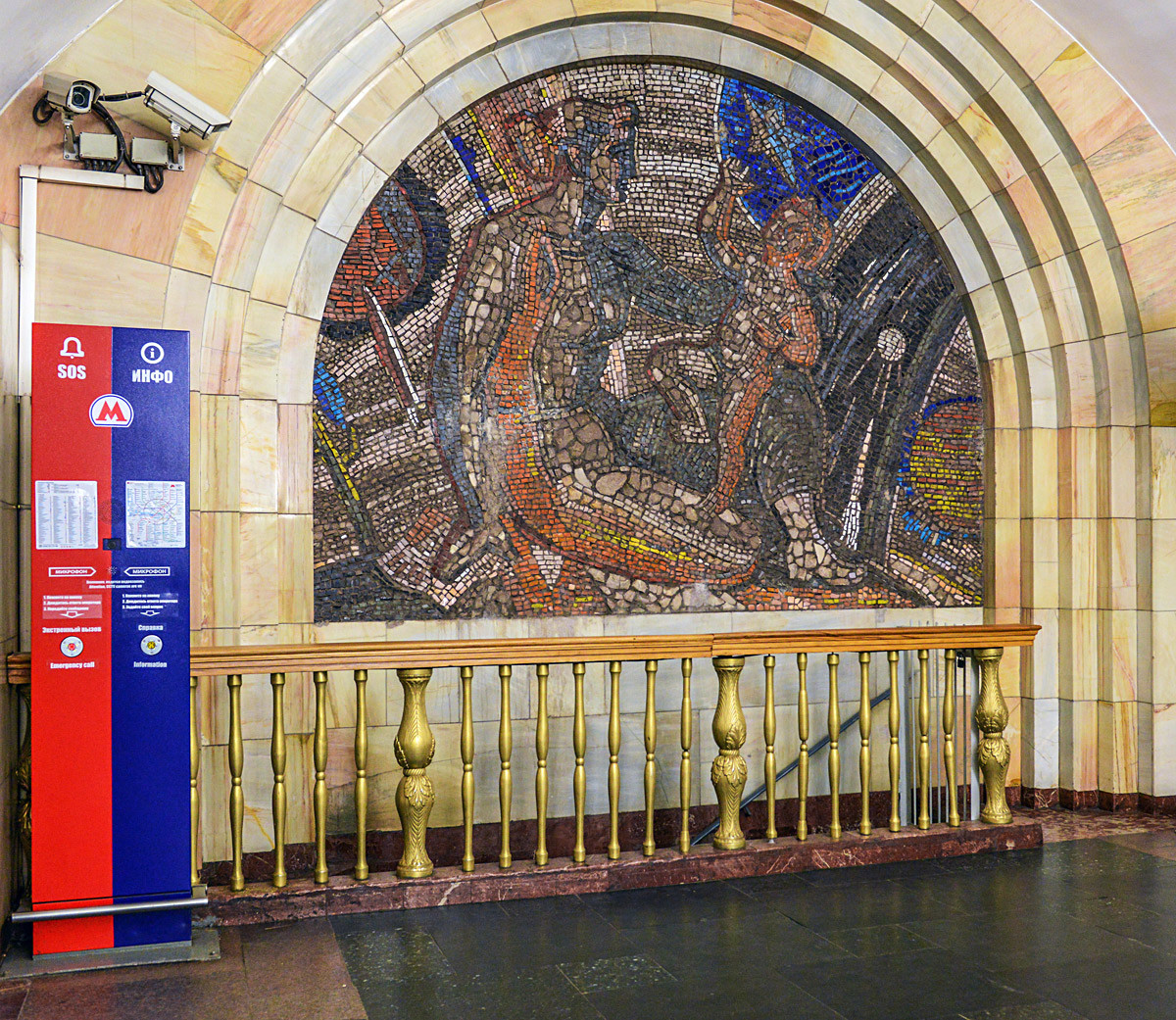 Inside the station there was also a bas-relief depicting Stalin, but again in the 1960s it was dismantled, and the cobalt blue mosaic “Morning of the Cosmic Era” was installed in its place. 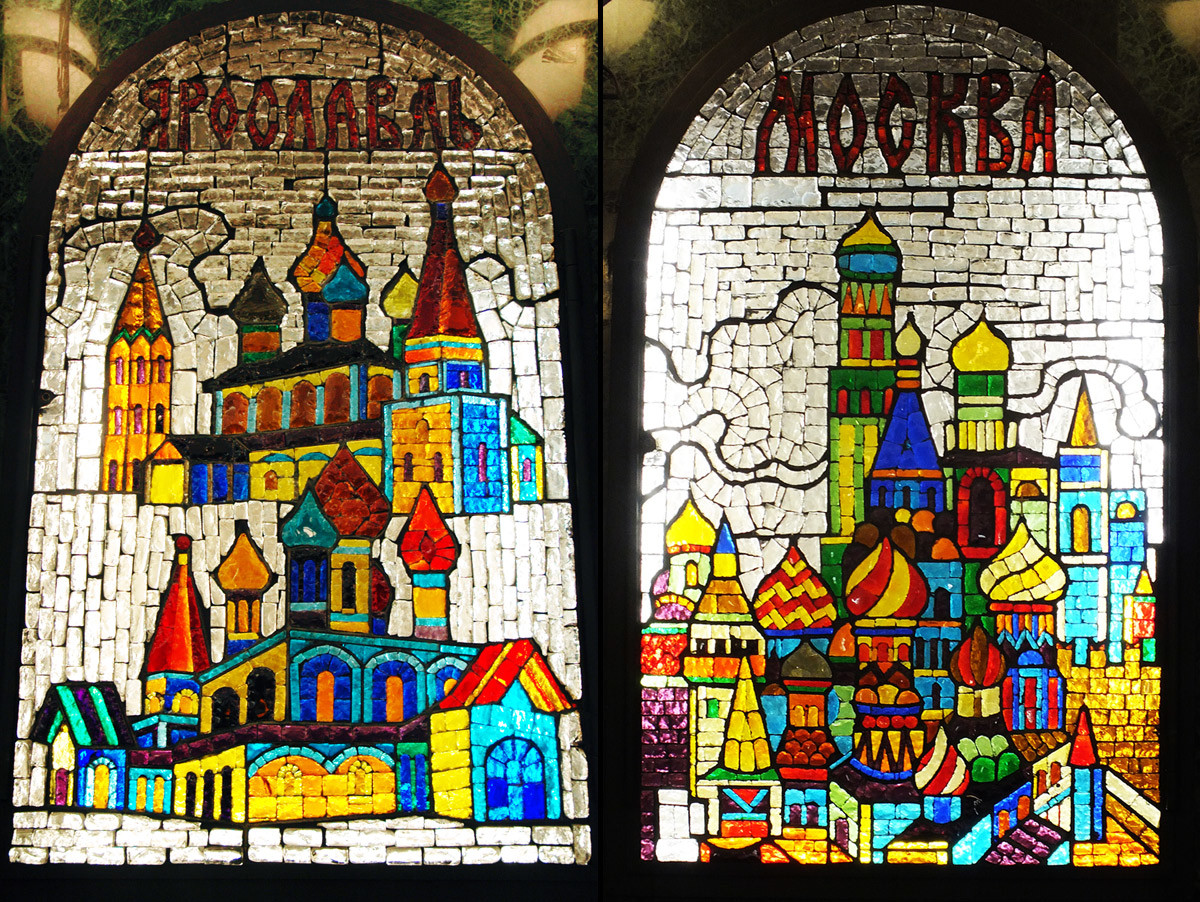 New metro stations tend to have a modern design, although some are stylized as underground palaces reminiscent of the Stalinist era. Trubnaya station in central Moscow is one such example. Despite being opened in 2007, it features granite, marble, and Art Nouveau-style lamps. The main attraction is the mosaic stained-glass windows with depictions of Russian cities, created by artist Zurab Tsereteli.