How Moscow has changed in the 2010s (PHOTOS) 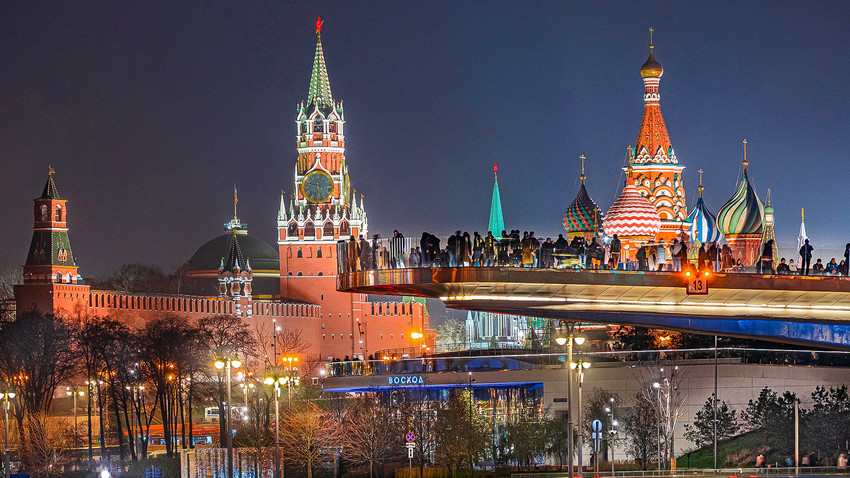 Konstantin Kokoshkin/Global Look Press
In less than a decade Moscow has undergone a fundamental transformation. For those who no longer remember - or have not seen it yet - we have visual proof.

The park, boasting a philharmonic hall, an ice cave, four climatic zones and a boomerang-shaped "floating" bridge soaring above the River Moskva, has become the new "face" of the capital, and has been included in the TIME magazine list of the World's Greatest Places.

Zaryadye Park opened in 2017 on the site of the demolished Soviet-era Rossiya hotel. The park was designed by the famous American architectural design studio Diller Scofidio + Renfro.

The VDNKh Park, or the Exhibition of Achievements of the National Economy, used to be an eclectic masterpiece of Soviet architecture. But with time its grandiose pavilions and gilded fountains became dilapidated, and the enormous area filled up with pretty awful retail outlets and filth.

The authorities began renovation of the exhibition center in 2013, allocating 100 billion rubles ($1.6bn) to the mega project (for comparison, Zaryadye Park, built from scratch, initially received 14bn rubles ($224.4m)! According to the authorities' plan, this ex-symbol of the USSR is to become one of the most popular tourist attractions in the world. For instance, this is how the Metallurgy Pavilion (the former Kazakh Republic Pavilion) looks now.

The Skoltech building, more reminiscent of a stadium or fortress, was opened in the autumn of 2018 at the Skolkovo Innovation Center, the Russian version of America's Silicon Valley. The construction of the innovation center started in western Moscow in 2010.

It is the first building in Russia designed by the iconic Swiss architecture firm Herzog & de Meuron. According to the media, Skoltech is the most beautiful academic institution in Russia.

And this is how a second project by Herzog & de Meuron in Russia - on the site of an old Moscow brewery - will look.

The project for the renovation of the Polytechnical Museum in Lubyanka Square goes back to 2011, when a concept put forward by Japanese architect Junya Ishigami won in an open competition. His design involved building a double-level park attached to the museum and linking it to Zaryadye Park with an underground passage.

The modernization of the museum itself has not been completed yet - it is to reopen at the end of 2020. But the facade and park with amphitheater and heated paving (to allow lectures to take place in the open even in winter) are already complete. At a later stage the park will have a café, shops and exhibition halls

Moscow's main thoroughfare used to look rather shabby: it had parked cars and ugly signs and was festooned with power lines and other cables. Extensive renovation work started in 2016 and for a while, as Muscovites put it, "the whole of Tverskaya Street was dug up and criss-crossed with trenches". However, the street has changed dramatically as a result.

Tyufeleva Roshcha Park has emerged in the south of Moscow on the site of the former ZIL automotive factory. The new space was developed by Jerry van Eyck from the New York !melk architecture practice jointly with the Russian design studio, Project Meganom.

It has a "blue lagoon" - an artificial pond with turquoise water - and a promenade area covered by a wooden canopy, pedestrian and bicycle paths, a stage, a sports area with exercise machines, pavilions and cafés.

This is one of the many embankments in Moscow to have undergone a transformation since 2011 when the extensive improvement of public spaces began. The old asphalt has been replaced with paving, and flowerbeds and benches have been put in. Now it has one of the best views of Moscow City.

Many Muscovites remember the "night of the long shovels". Overnight in 2016 about 100 unauthorized street kiosks were razed to the ground. Doner kebab stands and numerous pavilions selling everything from phone rechargers to music CDs were turned into a pile of rubble. The area around the constructivist pavilion of Chistyye Prudy metro station was cleared at the same time.

The Muzeon Sculpture Park outside the New Tretyakov Gallery and the adjacent part of the Krymskaya Embankment were a sad sight in 2012. It was discovered by accident that, in addition to old Soviet monuments, a lot of bizarre sculptures had also been deposited here in the 1990s. All the illegal busts commemorating such personages as a vegetable warehouse director, the manager of some sauna or even a dealer in Japanese cars were removed, and the area tidied up. Now it is one of the most popular walking routes in the city.

The square outside Belorussky railway station is the first thing many people arriving in the capital see. Street kiosks standing all over the place and unregulated parking used to spoil people's first impressions, but this is no longer the case now.

Its transformation was completed in September 2015. The rather grey and unremarkable square with its monument to Vladimir Mayakovsky has been paved with granite, and planted with lawns and flowerbeds. The square now has artistic lighting and romantic swings. Unregulated parking has also been dealt with - it is a pedestrian area now.