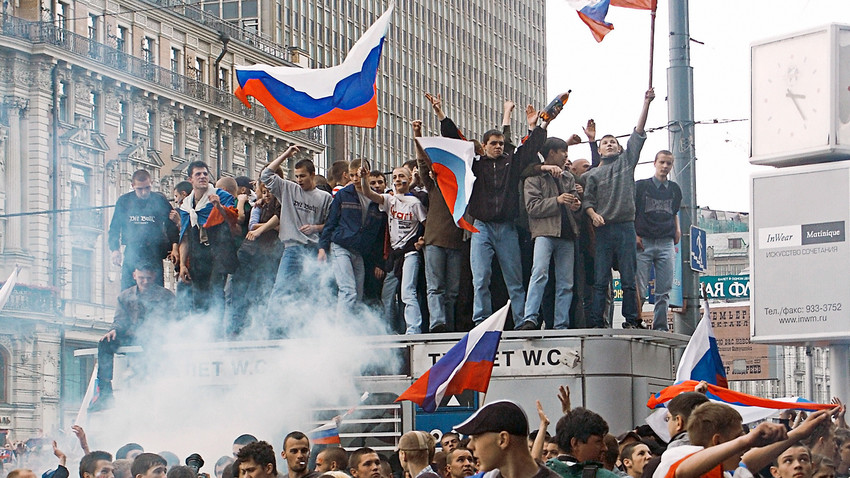 Dmitry Korobeinikov/Sputnik
Tanks, violence, kissing and prostitution are just a small fraction of the things Tverskaya Street has witnessed. In good times and bad, Moscow's main thoroughfare has always been at the epicenter of events. 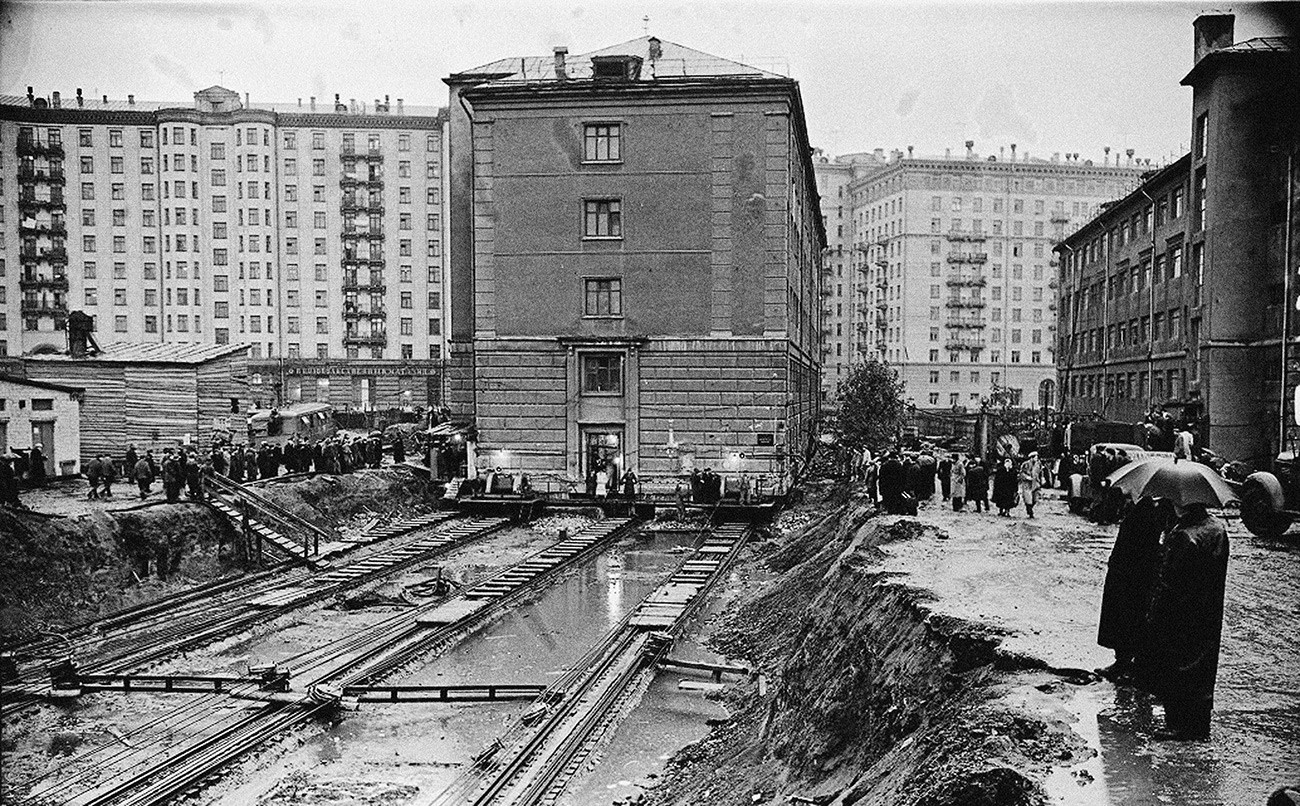 Tverskaya Street was initially too narrow and winding, and the Soviet authorities didn’t take the easy route when thinking up a way to widen it. They devised a plan to physically move a number of historical buildings without demolishing them. The buildings were lifted by jacks and moved on specially-laid rails. It took just 40 minutes to move the building for Mossovet (the Moscow mayor's office), and in total 26 buildings were moved in this way. Moreover, sometimes the people inside were not even been told and simply woke up on a new location the following morning. 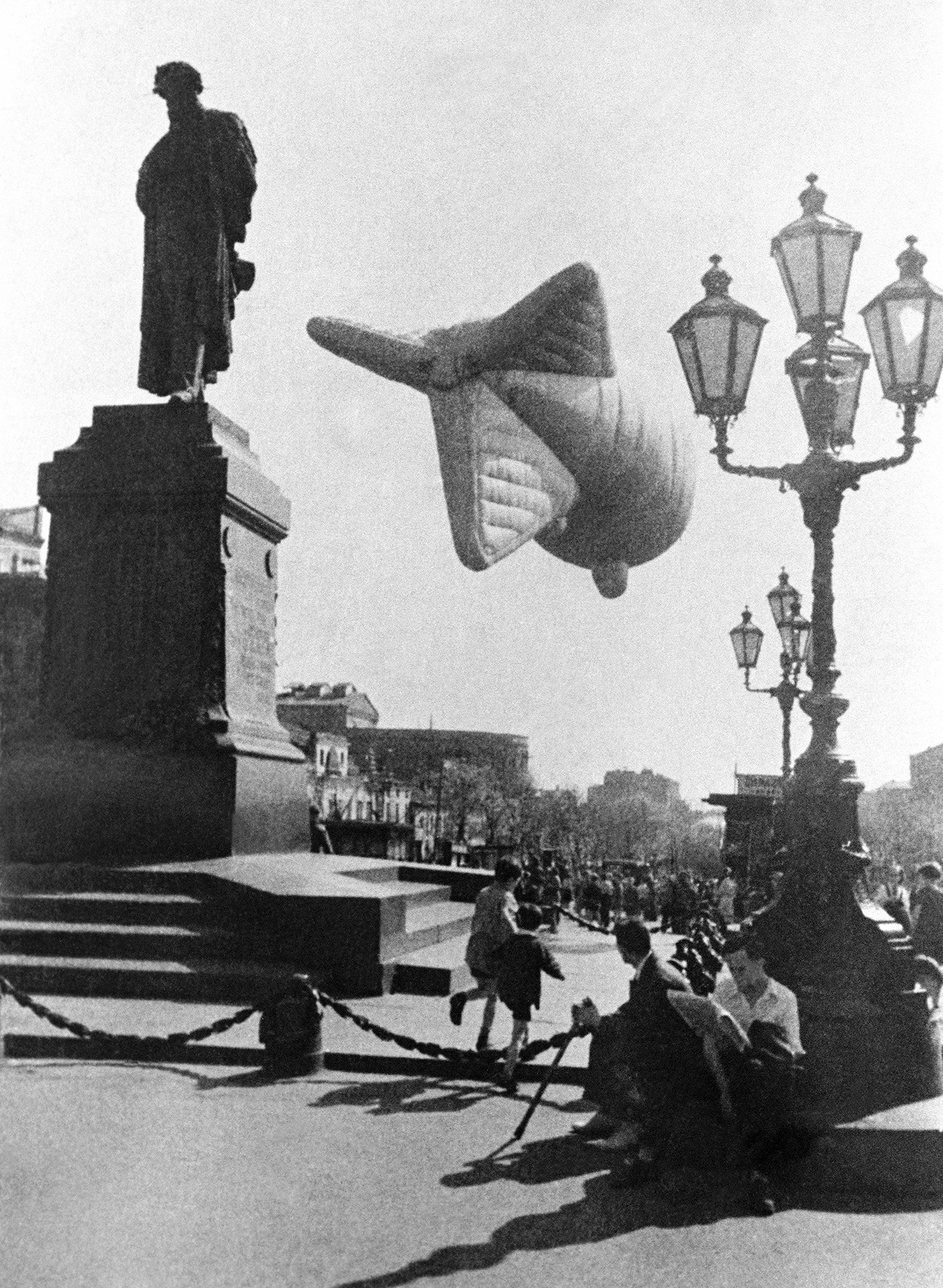 During World War II, aerostatic barrage balloons hovered over the city. They were tethered to the ground by numerous cables that were tied to explosives, blowing up airplanes if they collided with a balloon or cable. Aerostatic balloons forced enemy aircraft to fly at a higher altitude than planned, making it more difficult for them to aim their bombs when nose-diving. 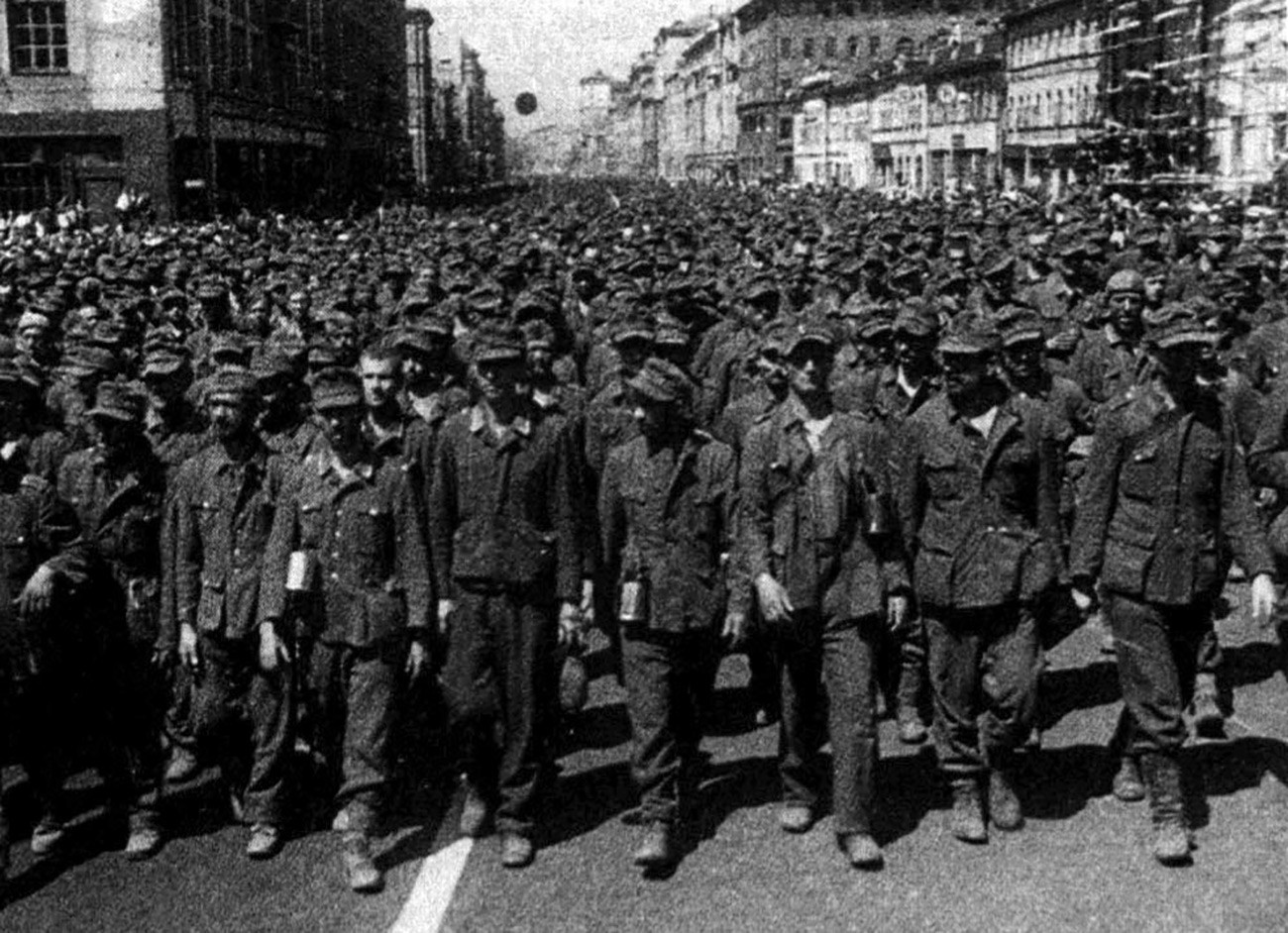 There was one occasion when the Germans did march through Moscow, but not in the way they had intended. On July 14, 1944  captured Germans were secretly brought to the capital and even many Communist Party officials and members of the military knew nothing about it. Early on the morning of July 17 the march was announced on the radio, and nearly 60,000 Wehrmacht prisoners-of-war processed through the main streets of Moscow. They were followed by water sprinkler trucks, symbolically washing the city of "filth." 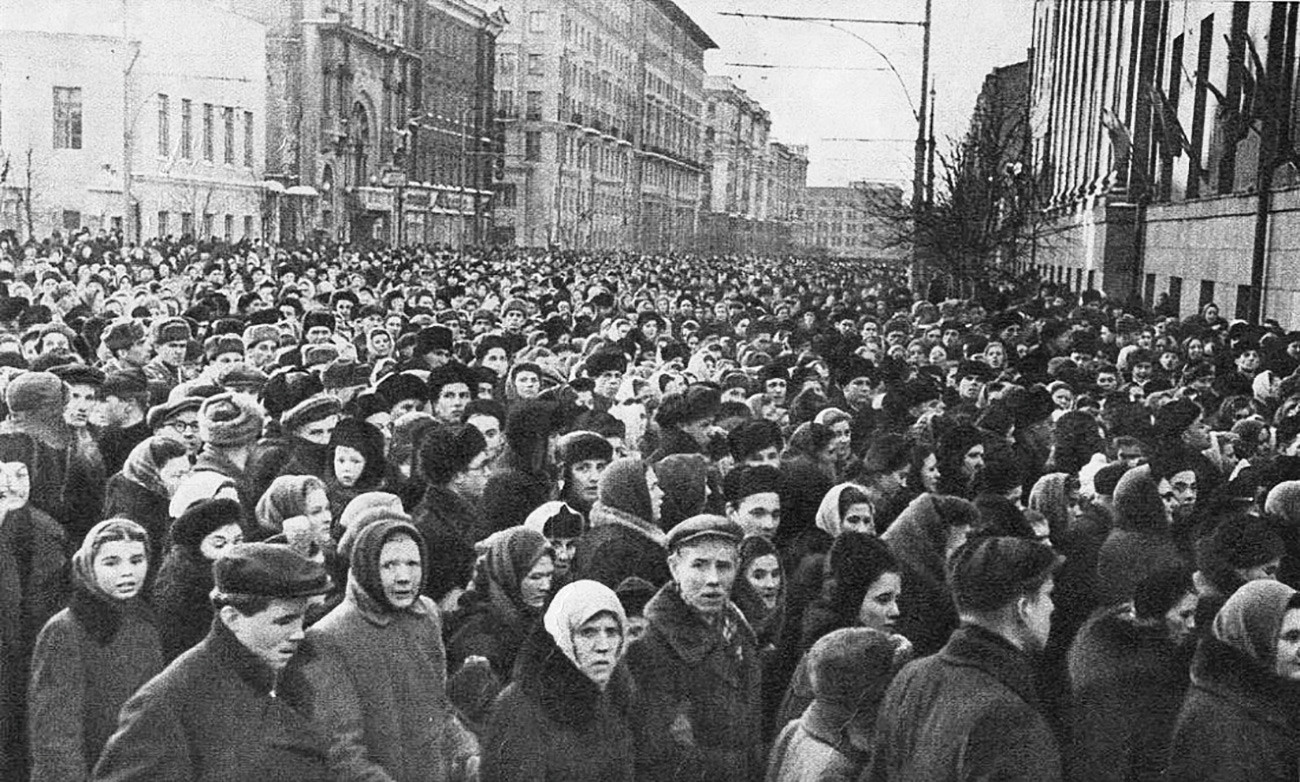 About two million people wanted to see Joseph Stalin’s body following his death. On March 9, the day of the funeral, the central streets of Moscow could not physically accommodate all these people, but the authorities decided to block off side streets, preventing the crowd from dispersing in different directions. This caused a crush in which many people were trampled or died from asphyxiation. Mortuaries and registry offices were instructed to falsify the cause of death on the victim’s death certificates. 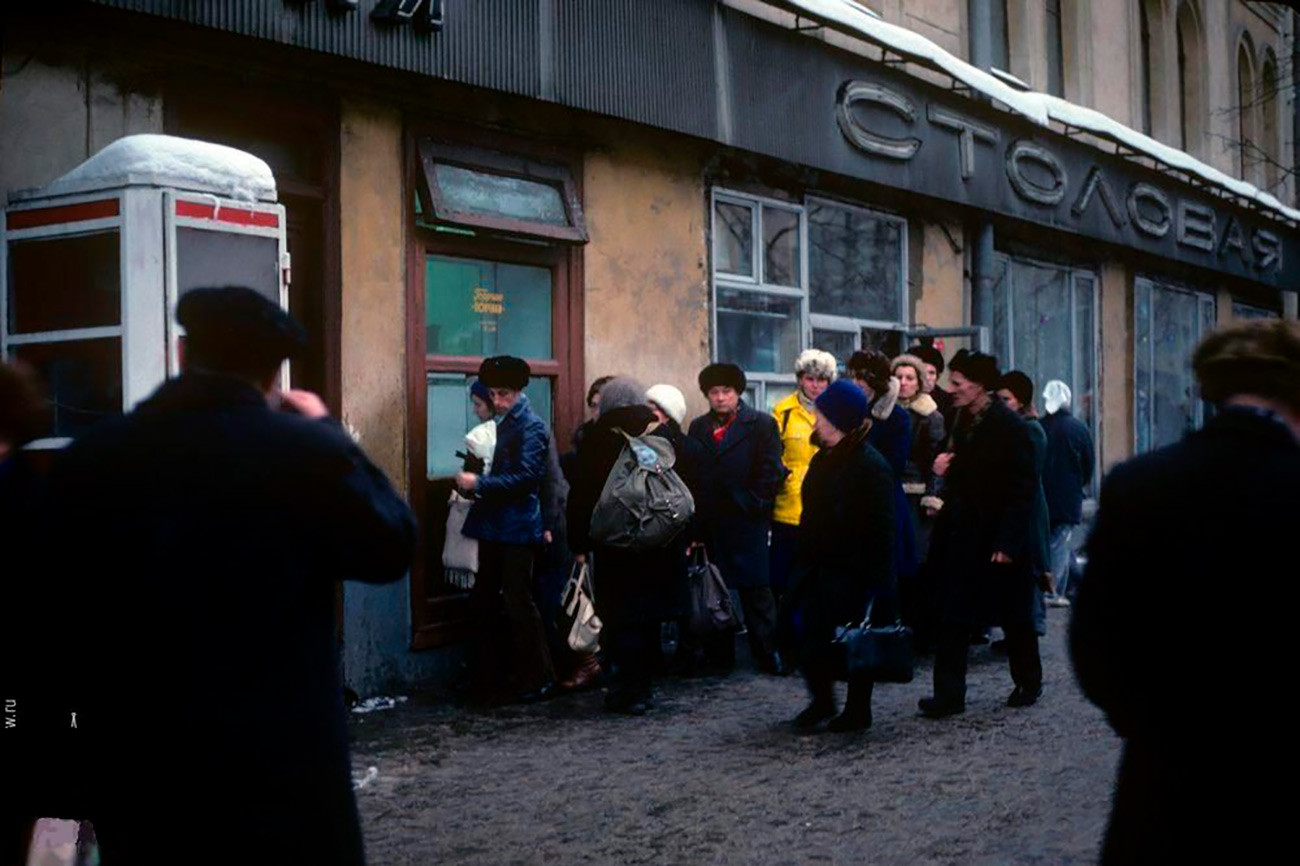 In the 1970s, queues became one of the most persistent symbols of Tverskaya Street. People queued for everything – from doughnuts to boots. 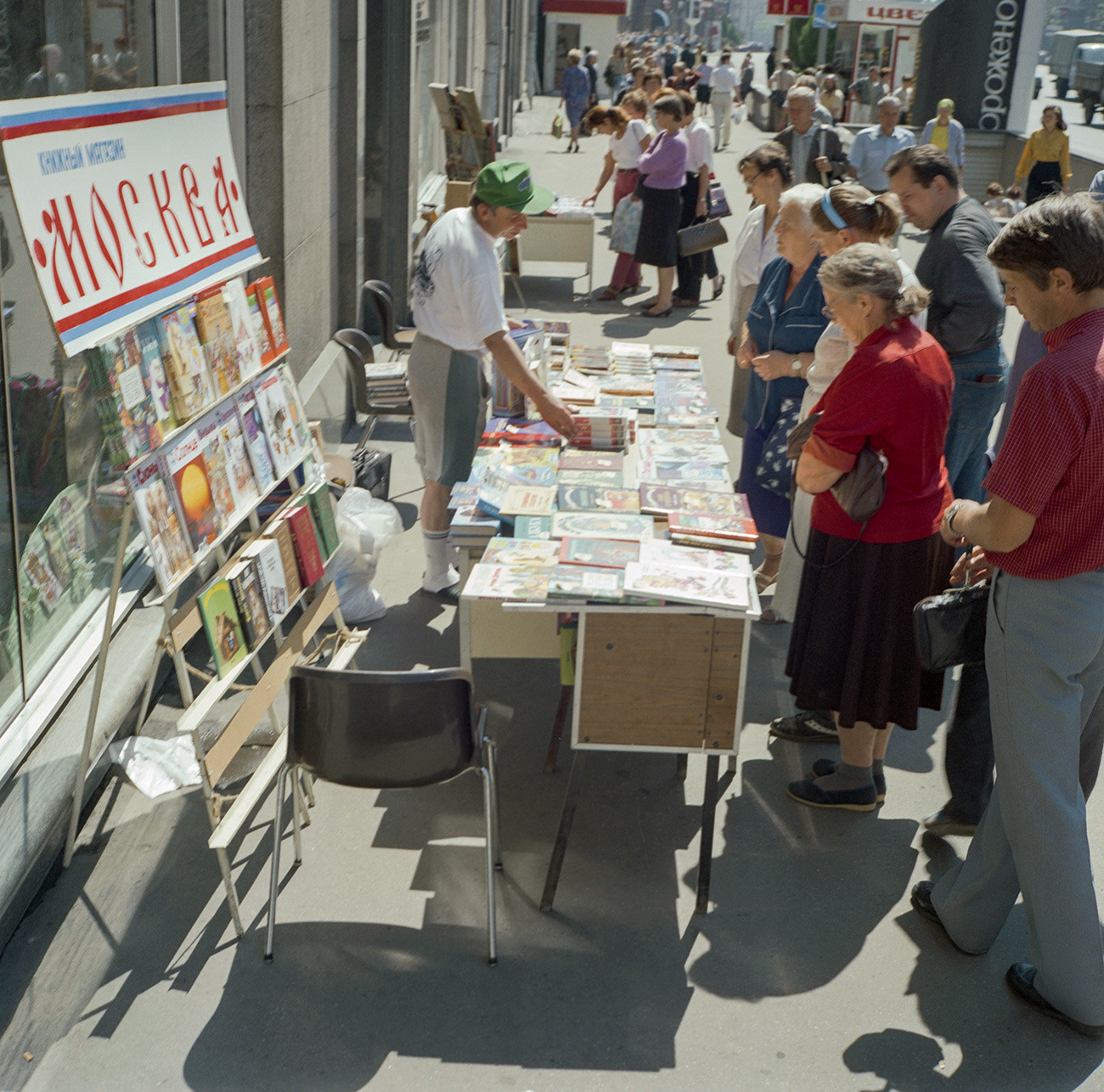 In the 1990s, Tverskaya Street, like the rest of the city, was taken over by semi-legal private street traders. Makeshift counters created from cardboard boxes and stalls filled Tverskaya Street, causing it to look rather grimy and sordid during this period.

The opening of the first McDonald's, 1990 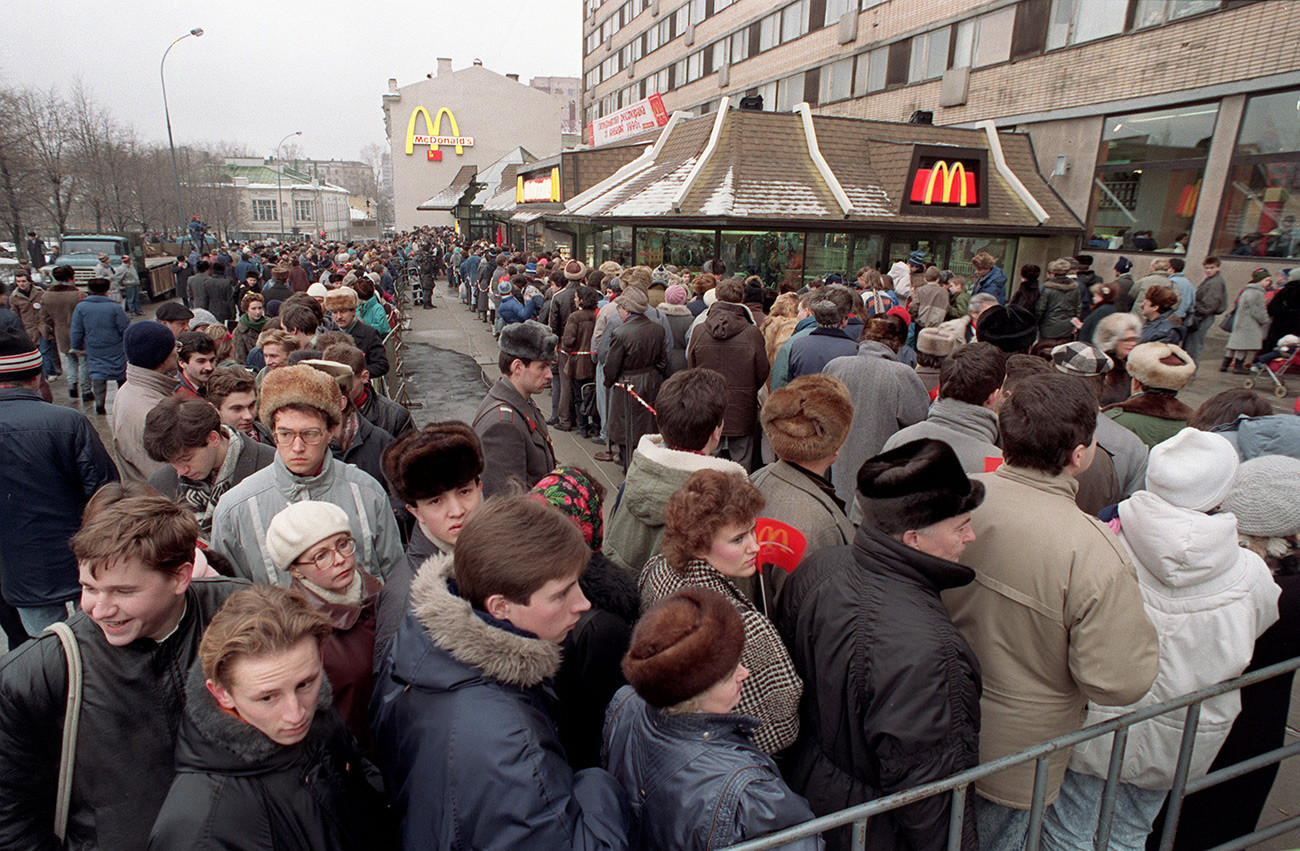 On its opening day on Jan. 31, 1990, about 30,000 people lined up to try a hamburger. Furthermore, McDonald's wasn't even cheap at the time, with a Big Mac costing approximately as much as a monthly metro/bus travel card. 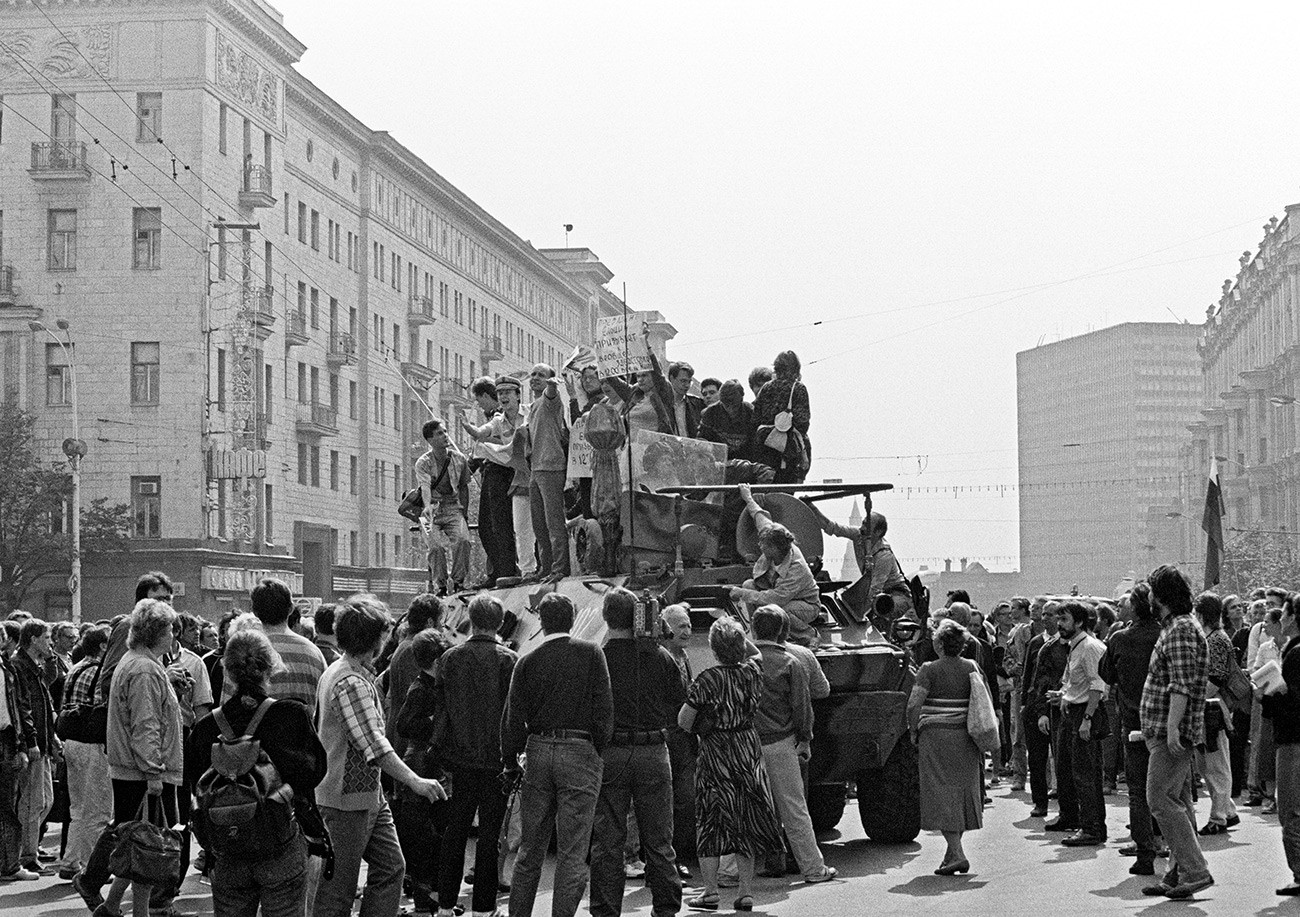 In August 1991, Moscow and Leningrad (St. Petersburg) endured the events surrounding the putsch. The Telegraph (post office) building on Tverskaya Street was evacuated and occupied by motorized riflemen, and there were rallies on Manezh Square and tanks and barricades on Tverskaya Street. 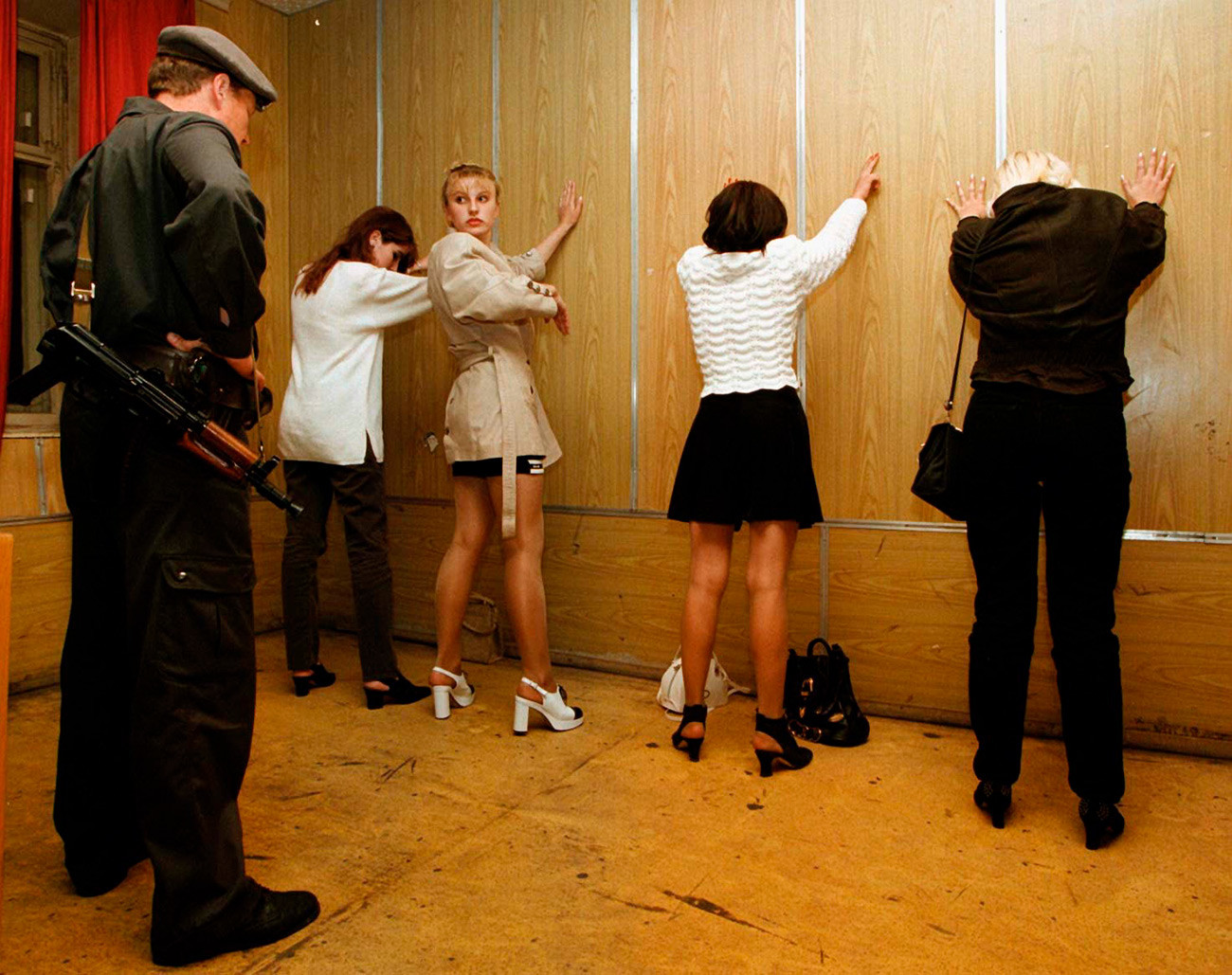 After the collapse of the Soviet Union, prostitution swept over the country, including child and male prostitution. At night Tverskaya Street turned into the "main shop window." The police would frequently launch raids in an attempt to at least drive the prostitutes from the center to Leningradskoye Shosse.

Explosion in the underpass at Pushkinskaya metro station, 2000 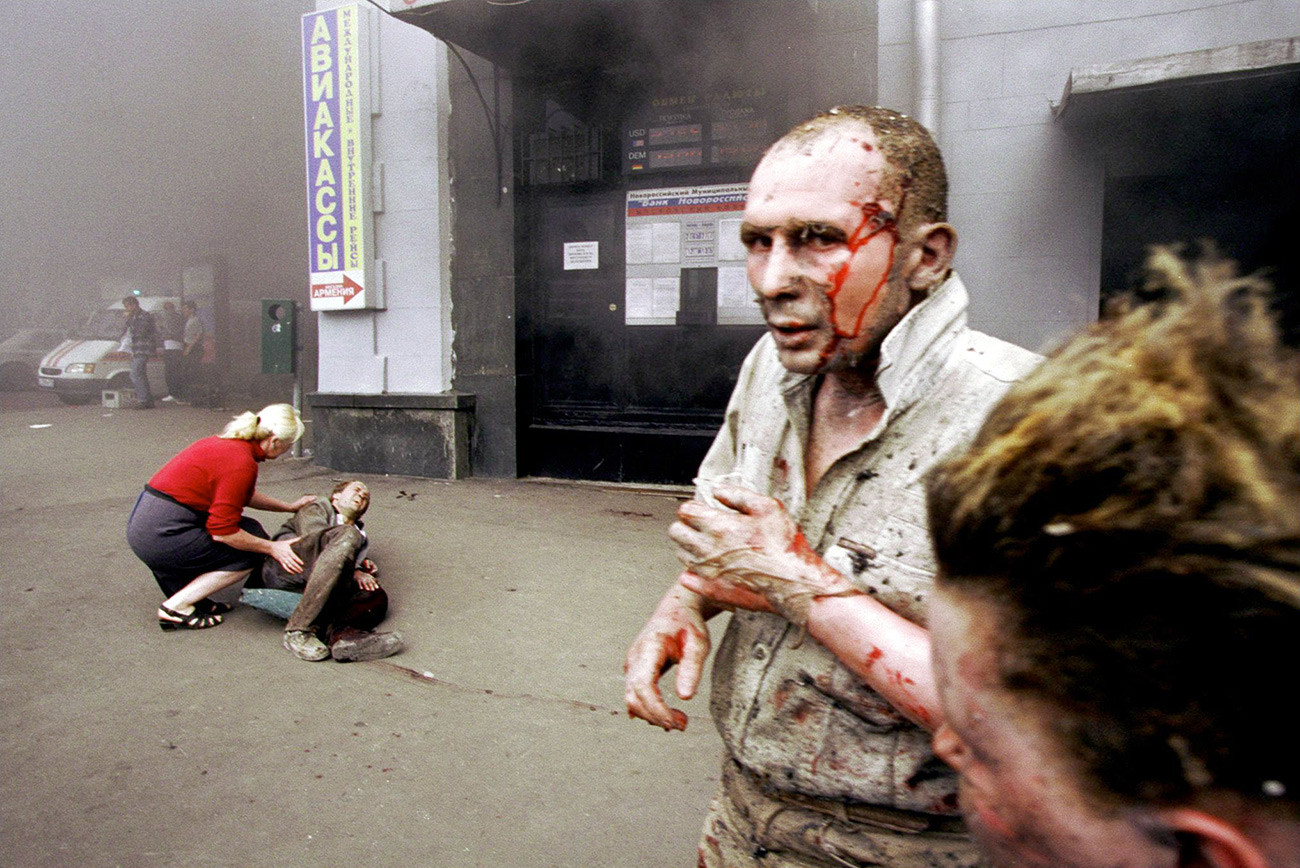 On Aug. 8, 2000, a terrorist attack in the underpass of Pushkinskaya metro station (right in the middle of Tverskaya Street) killed thirteen people and injured another 118. The subsequent investigation identified a group of suspects, all of whom were residents of Chechnya. However, in 2006 the criminal case was closed on the grounds that the perpetrators had presumably died, and the attack remains an unsolved mystery.

Football supporters trash the center after the national team's defeat, 2002 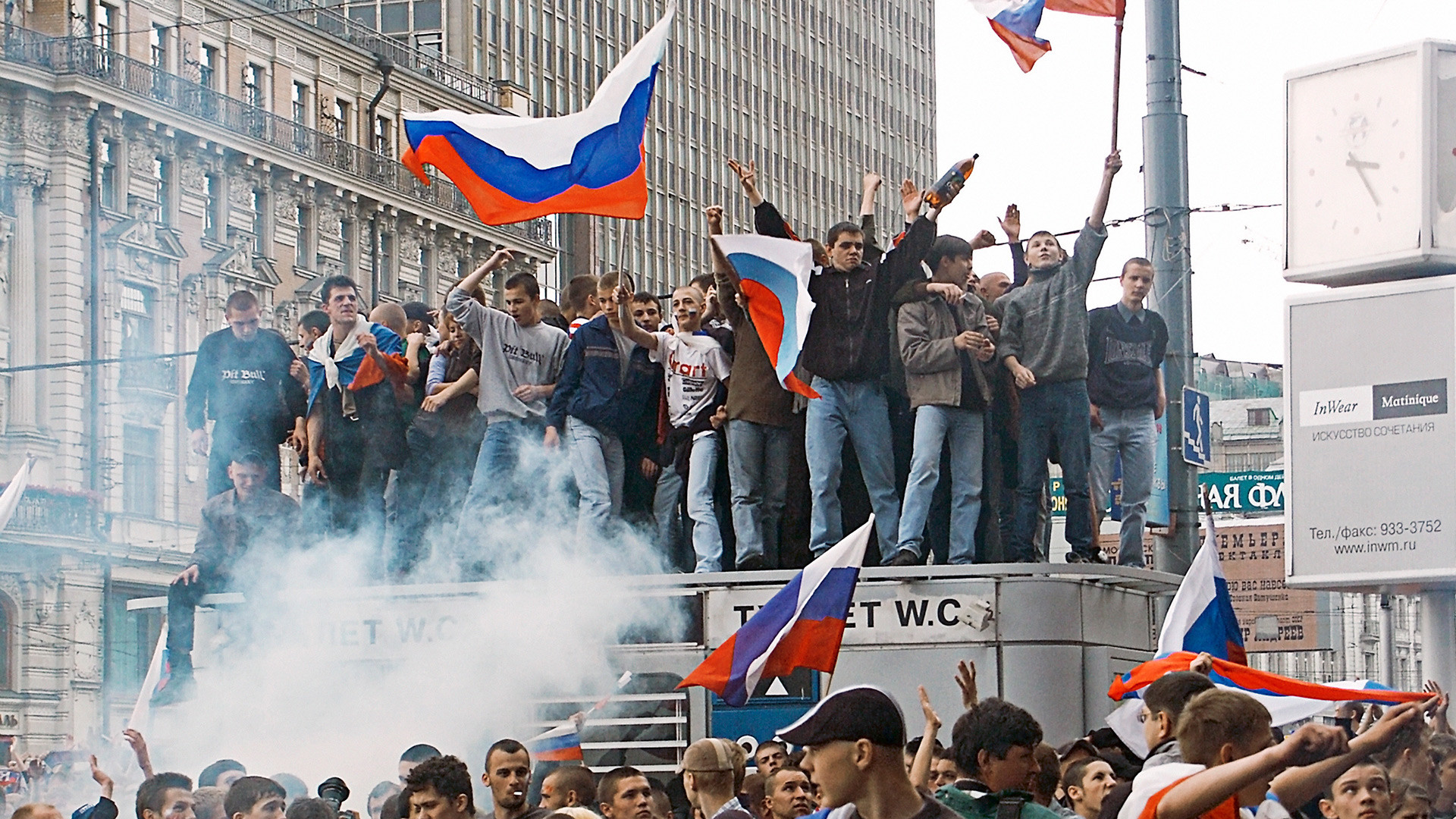 After Russia lost to Japan in a World Cup match (and not even a final stage match), fans began burning cars, smashing shop windows and overturning buses. Some of the fans hid in the State Duma building. There were not enough police officers in the vicinity to bring the situation under control. Two people died and 79 were injured. 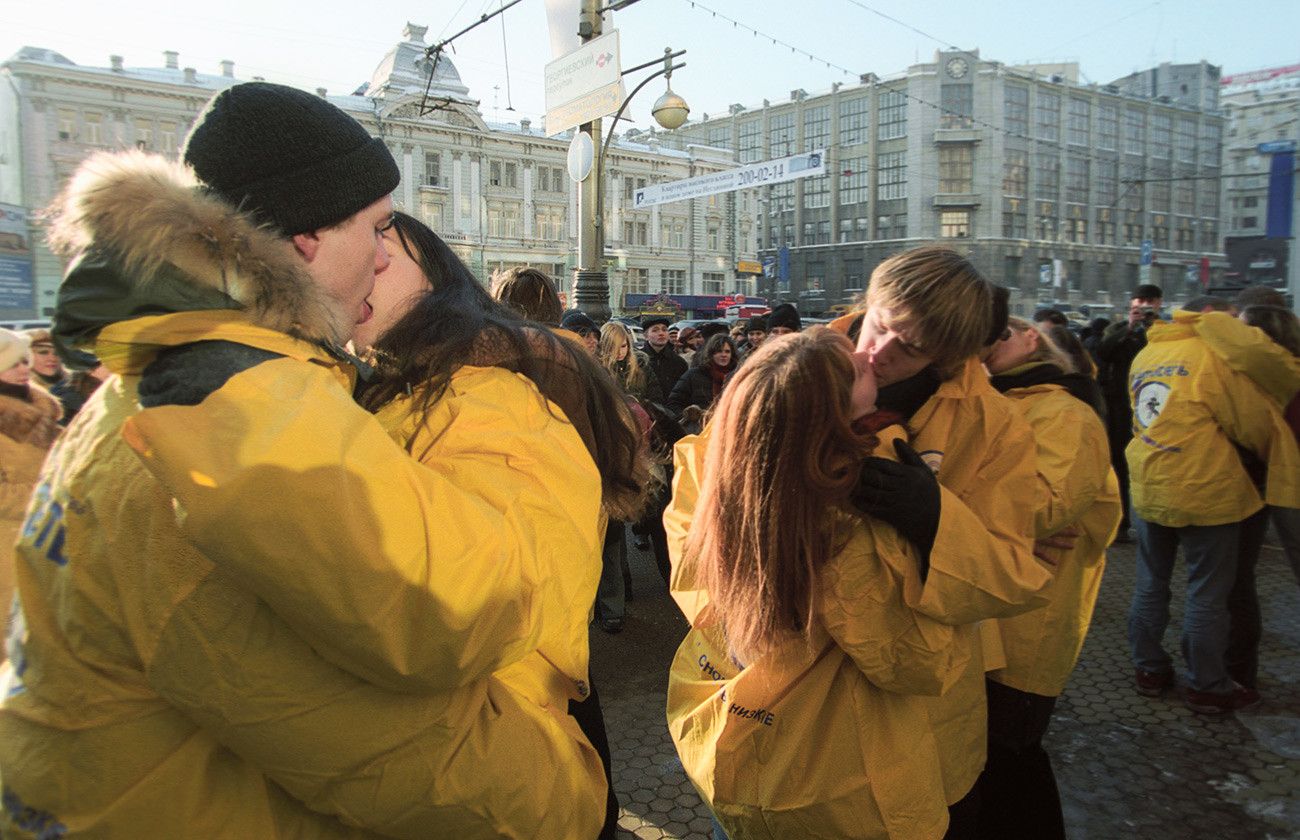 As part of a St. Valentine's Day stunt, Tverskaya Street took to kissing and held a competition for the longest kiss. The winning couple locked lips for 46 hours. 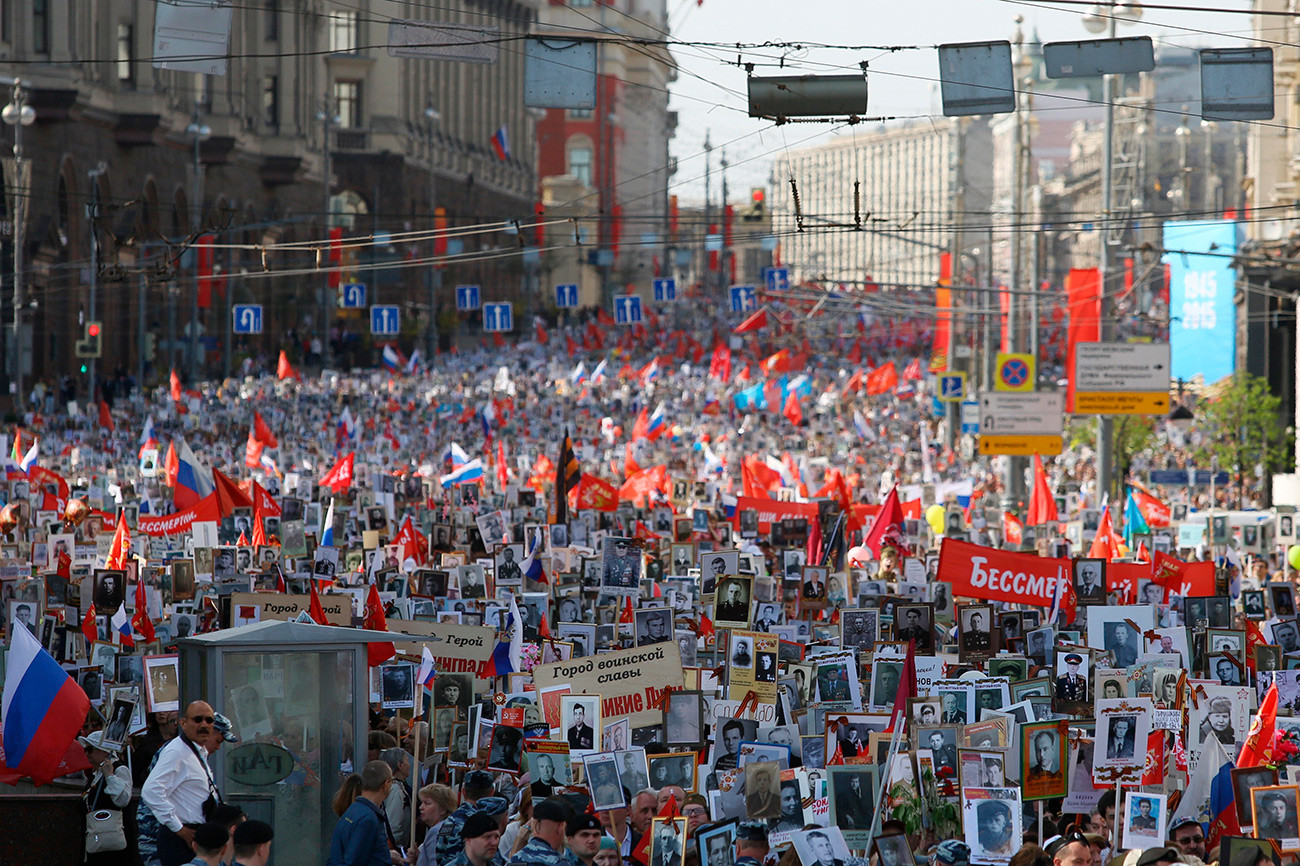 This initiative to remember those who fought in WWII originated outside of Moscow, but a procession of this kind passed along Tverskaya Street for the first time on May 9, 2015. People carried portraits of relatives who fought in war. President Vladimir Putin took part, carrying a picture of his war veteran father.