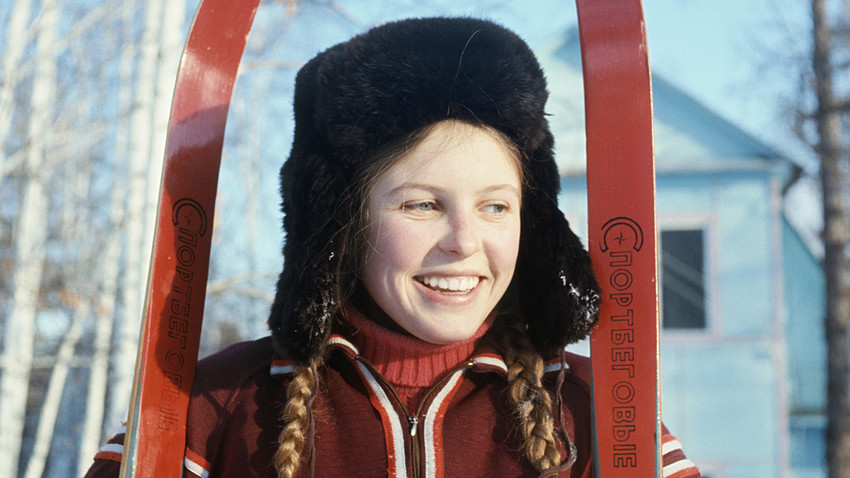 Boris Klipinitser/TASS
We don't talk about it much anymore, but everyone in the Soviet Union did it - sometimes, because they were forced to. In fact it was all Lenin’s idea. Wе even made Fidel Castro do it, too!

Our achievements in ice hockey and figure skating are all the talk, while Sochi’s new shiny facilities for downhill skiing attract thousands of tourists every year. Yet, one of the Soviet Union’s most enduring mass pastimes is the elephant in the room we no longer talk about. It’s cross-country skiing, of course.

Russia has stunning mountains, but almost 80% of its population live way west or north of them. The large urban areas of the European Region of Russia are mostly flat. Downhill skiing, which required fancy gear and could only be done at faraway, inaccessible locations, was a hobby of the very select few in the USSR. It started to gain popularity in the 2000s and an artificial downhill skiing facility was even built just outside of Moscow, in order to meet the occasional demand from those who couldn’t quite make it to Courchevel every weekend. For most of the last 100 years, however, the rest of us ran about all winter on cross-country skis - and, for some, it wasn’t even by choice.

Everyone to the ski track!

Cross-country skiing, actively popularized by Vladimir Lenin himself from as early as 1919, was very popular in the Soviet Union. There were a lot of ski tracks everywhere, and people commonly skied en mass on frozen and snowed over surfaces of rivers and aquatories, which were plentiful. Kids were introduced to this form of skiing from an early age, and there were cute little strap-on skis for them that did not require special boots. 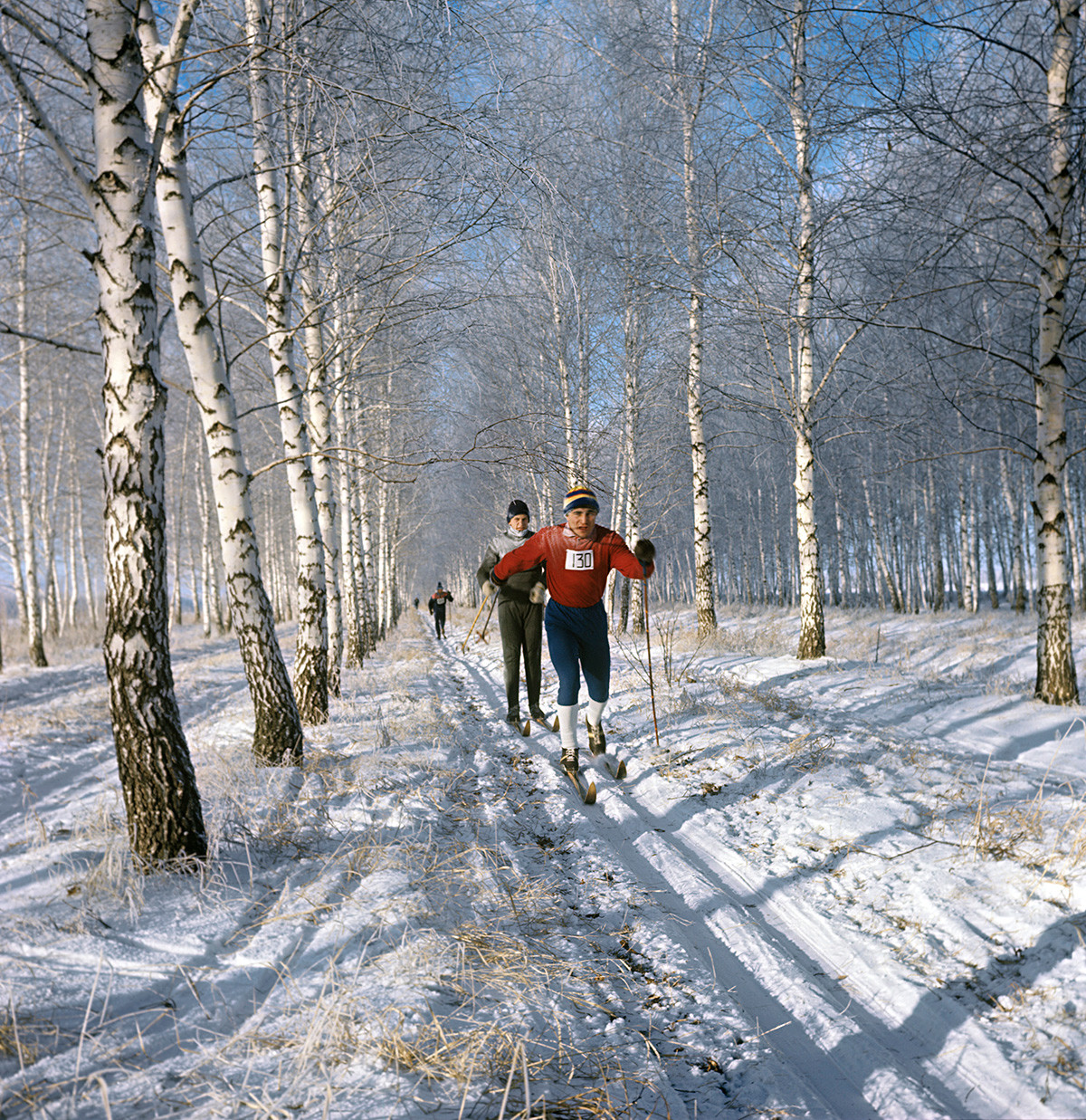 Our skis were mainly wooden, and maintaining them properly with the right type, and amount, of wax for the outside temperature and the present consistency of the snow, was an art taught in the snowy parts of the country from an early age. In fact, whatever modest hills we did have around, most of us skied downhill on them in cross-country skis, an endeavour we all knew was risky, but was nonetheless commonly engaged in.

Unlike ice sports, cross-country skiing was not as much a competitive sport for the Russians, as it was a fitness regime that did not require any skills that weren’t commonly held. Like riding a bike, a child needed to be taught once, and you could not really do too badly, once you no longer fell immediately. Politicians, celebrities, ballerinas, and even heads of state, felt obliged to pose cheerfully on skis, setting an example. When Fidel Castro visited the Soviet Union in 1964, he was compelled to give it a try - making for a rather amusing sight. To us, an adult cross-country skiing for the first time was like an adult who couldn’t ride a bike. 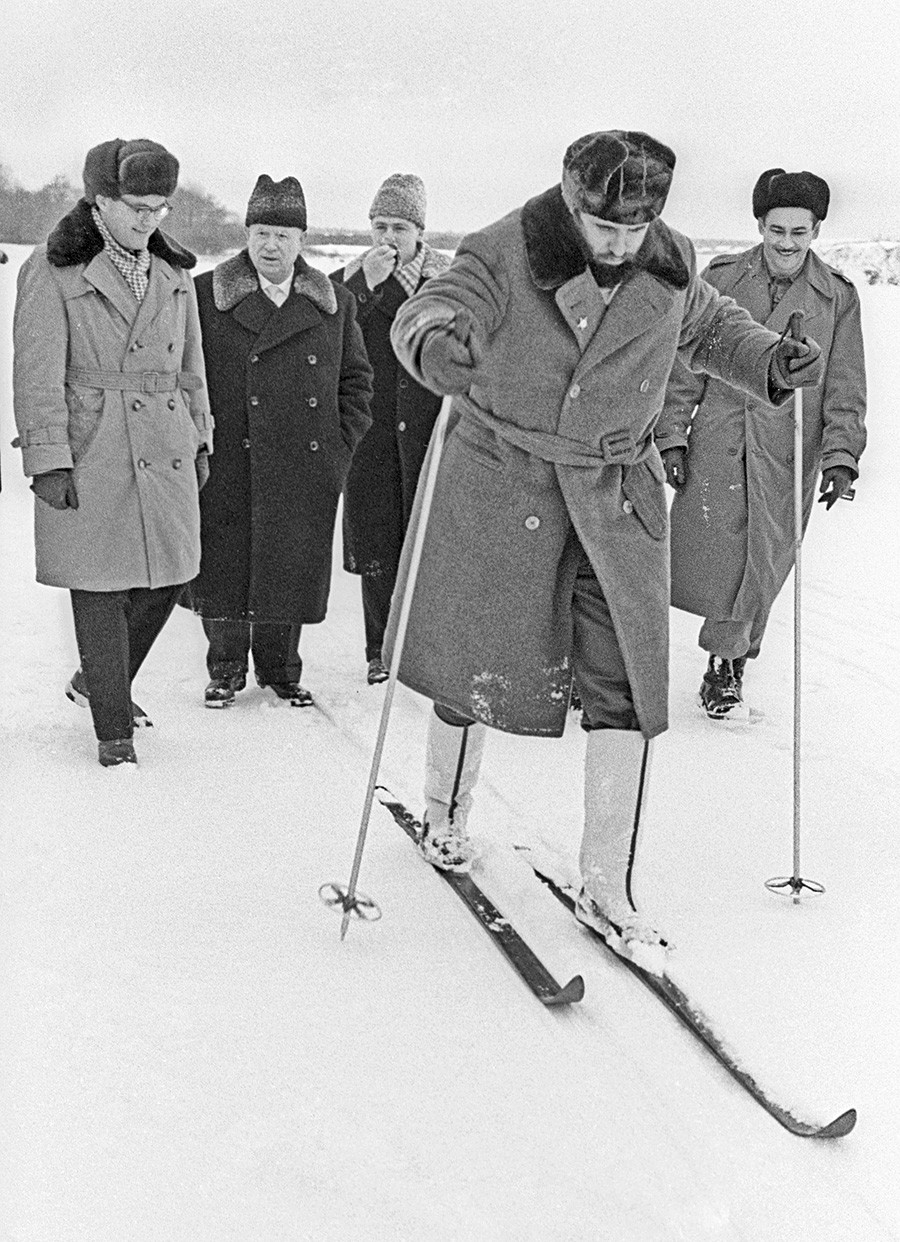 Castro (front) trying on skis, with Khrushev (second from left) looking on in amusement, Russia, 1964

It was also often a way to get from point A to point B in the countryside, when both walking and biking were impeded by the snow. The Soviet Army made huge use of cross-country skiing - regular tournaments were held among the ranks of the servicemen. Whole ski battalions were created in 1941 as a strategic force in repelling Nazi Germany’s advance into the USSR during the early months of World War II. Tens of thousands of troops, camouflaged in white, moved around on skis. 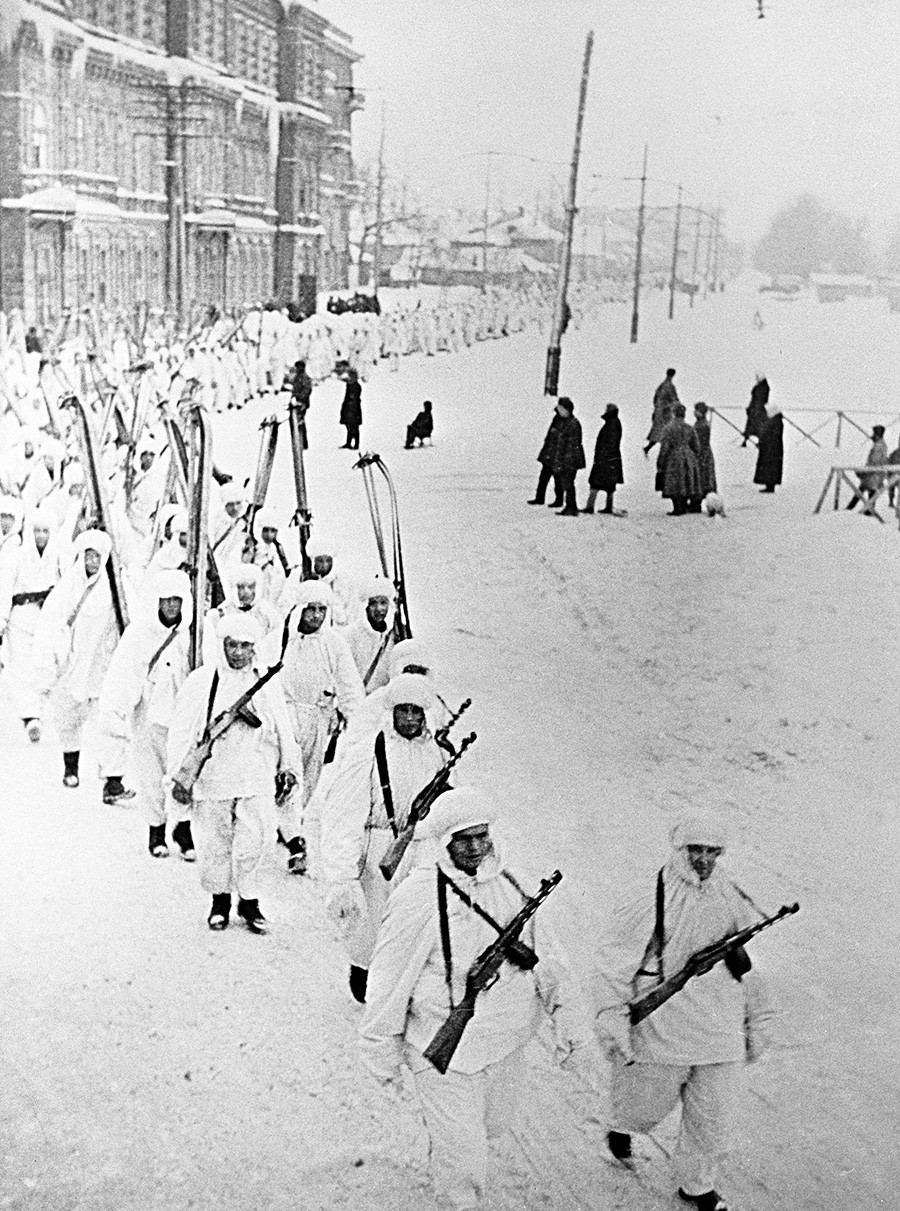 A column of skiers-gunners in winter camouflage cloaks, 1942

Walk on the dark side (and a patch of grass)

There is, however, a dark side to any Russian’s relationship with skis (unless they grew up in the part of the country without snow). Ever since Vladimir Lenin cheerfully created youth fitness skiing brigades in 1919, the whole thing sort of escalated. The late 1920s saw the enactment of GTO, mandatory fitness benchmarks dreaded by many generations of schoolchildren, and cross-country skiing featured heavily.

GTO norms applied to everyone aged 10 to 60, and their achievements were featured particularly prominently in school programs on physical education. For example, girls aged 10-11 years had to run 1 km on cross-country skis within 8 minutes to qualify for the ‘gold’ badge, and could still get the ‘silver’ badge if they were up to 30 seconds late. Any time after that, you were a loser.

Unlike some other GTO benchmarks, however, the cross-country skiing ones required training that, by definition, could not be done in a gym. Children comprising the school population came from many different families. Some were the sort that skied on weekends and participated in “Dad, mom and me - the fit family!” team competitions in their free time, others - not so much. Presumably, in order to give their progeny an equal shot at those GTO benchmarks, someone in the Soviet Union decided once that making cross-country skiing a mandatory activity during all PE lessons in winter time was a brilliant idea.

Some people took to cross-country skiing naturally, and weren’t, in fact, traumatised by it as much as by other GTO requirements, such as - a requirement to be able to climb a rope. Yet, for others, cross-country skiing thus became a bane of their childhood. School children were required to show up to school in outdoor skiing clothing (instead of the school uniform) for the whole day, sometimes twice a week, and bring skis with them.

The latter may sound simple if you imagine a kid that goes to school next door - but in large cities, where many children were sent to a better school across town, it meant somehow managing those skis on crowded public transport in rush hour. An average public school in a large city would have at least 500 or more children of skiing age enrolled at any given time, and yet had no facilities where to keep and secure the rather bulky gear. 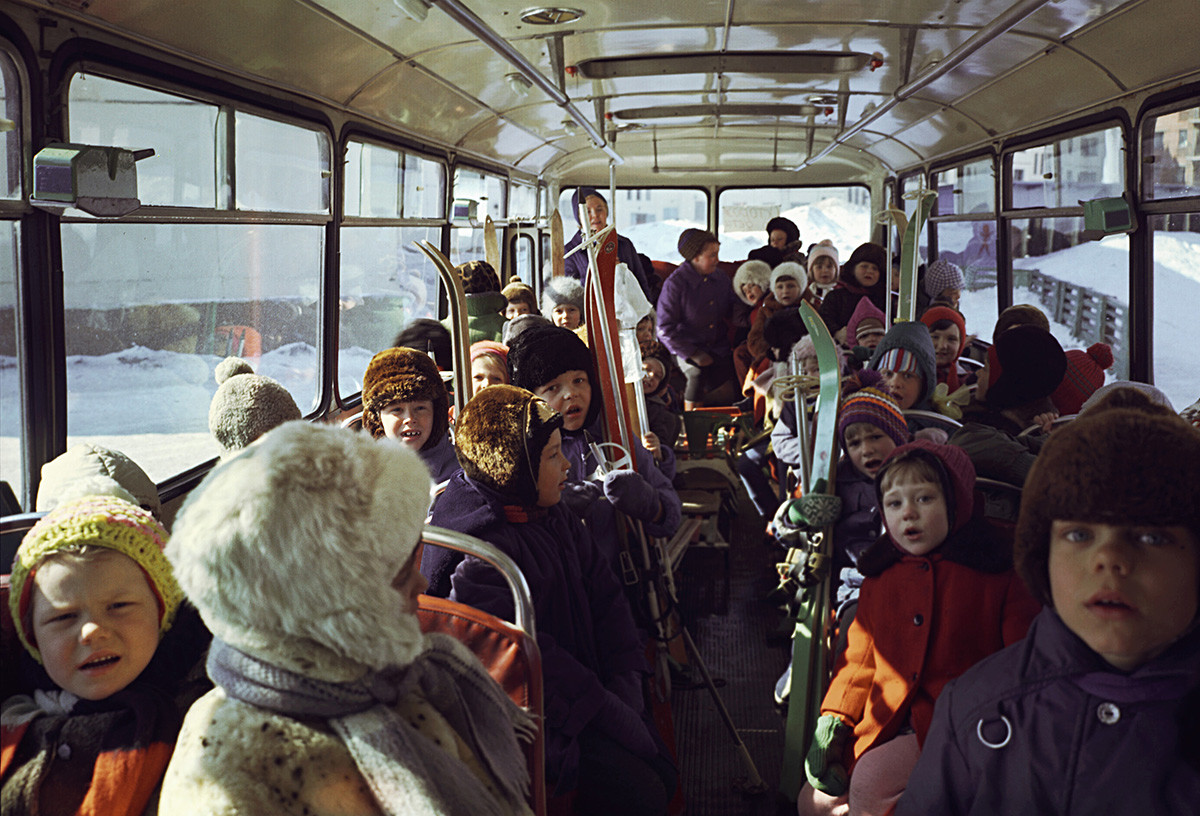 As with all activities that were universally considered good, having it forced indiscriminately onto every child, including those who were decidedly not athletic nor outdoorsy, made cross-country skiing the butt of sad jokes in the 1970s and 1980s, as a sort of a thing everyone had to, but most people no longer wanted to do. The Ministry of Education did not let go, either - dreaded cross-country skiing was notoriously rain, hail or shine pastime, be it -20C, a snow storm, or, as the case sometimes was, an early spring and the complete melting of all usable snow. Photos of school children walking around on skis on patches of wilted grass visible through the disappearing snow became early Soviet memes.

You would think that we no longer force every child to pretend to cross-country ski for a double period twice a week - this sounds like the sort of thing that makes no sense, so, sure enough, we got rid of it, right? Wrong! We still do it, even though many argue that the tradition doesn’t translate well into modern times. Nowadays, however, it’s not as ubiquitous, and some urban schools are getting rid of the activity. But others are going as strong as ever. 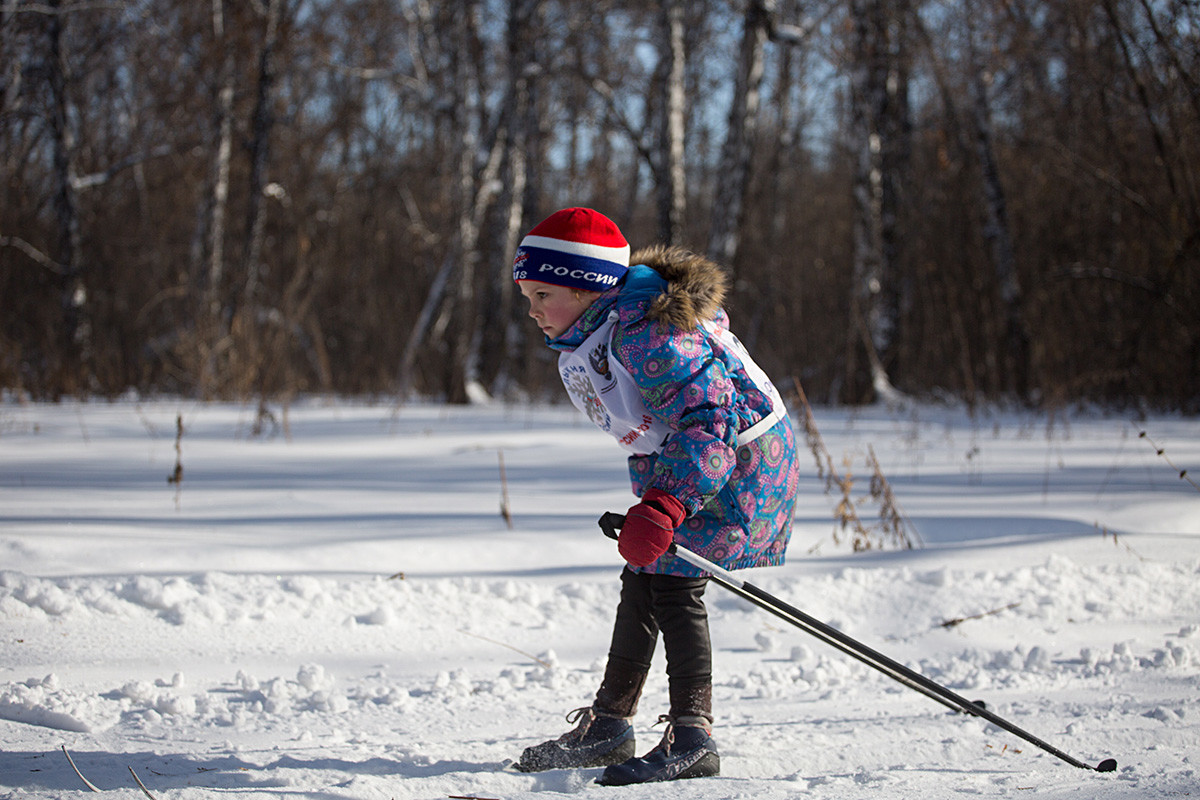 In 2016, a PE teacher in the Perm region made headlines when he returned to school mid-lesson to swap a broken ski, leaving 11 school children behind in the woods. None of them were there when he came back, and, despite most of them having cellphones, a few had taken a wrong turn and took a while to find, resulting in mild frostbite injuries. They were rescued by a passerby skier, who showed them the way out of the woods. One can easily see how the ending could have been much worse. Meanwhile, this winter in Moscow, where it’s been above melting temperature for most of this past February, the debate about the sensibility of those mandatory cross-country ski lessons that do remain in some schools, is finally being brought up again.

We still have the GTO norms in Russia, and they now apply from the age of six. But it’s a bigger tent now, and there is a way out for the “losers” - cross-country skiing is now optional. Cross-country running is offered as an alternative “for regions without snow”. Meanwhile, downhill skiing is more affordable these days, and it is, without doubt, more glamorous. Many think that winter sports have had their day in Russia, as they now yield in popularity to almost any other form of fitness. But, no longer forcing children to do it may yet bring about a renaissance.