How and where Putin spends his vacation (PHOTOS) 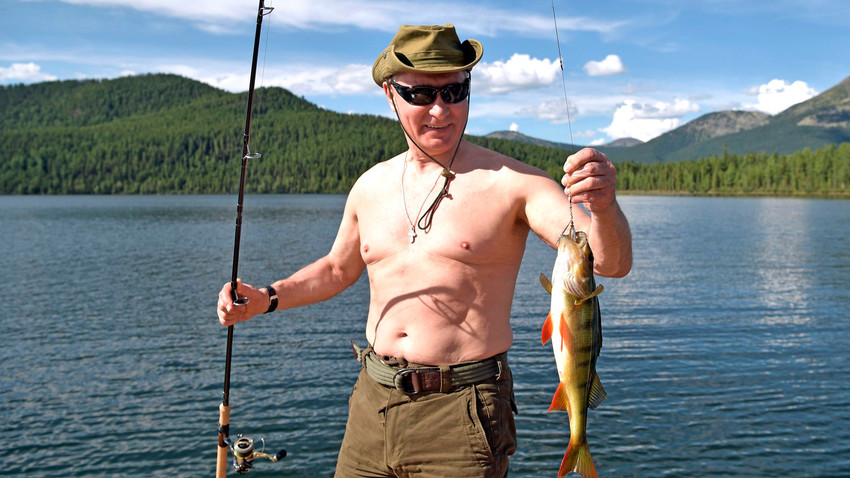 Kremlin.ru
Wherever the Russian president goes on holiday, you can bet your bottom dollar it will be in Russia and, most likely, the untamed taiga.

“It’s the job of the president to set an example and popularize places in his own country that most people might not even know about,” said presidential spokesman Dmitry Peskov in 2019 when asked why Putin vacations only in Russia.

Although Putin, like all civil servants, has 30 days’ leave a year, he rarely takes long breaks. His vacation is usually short, no more than a few days. We discuss the Russian leader’s favorite holiday hangouts, what he likes to do, and who he takes with him. 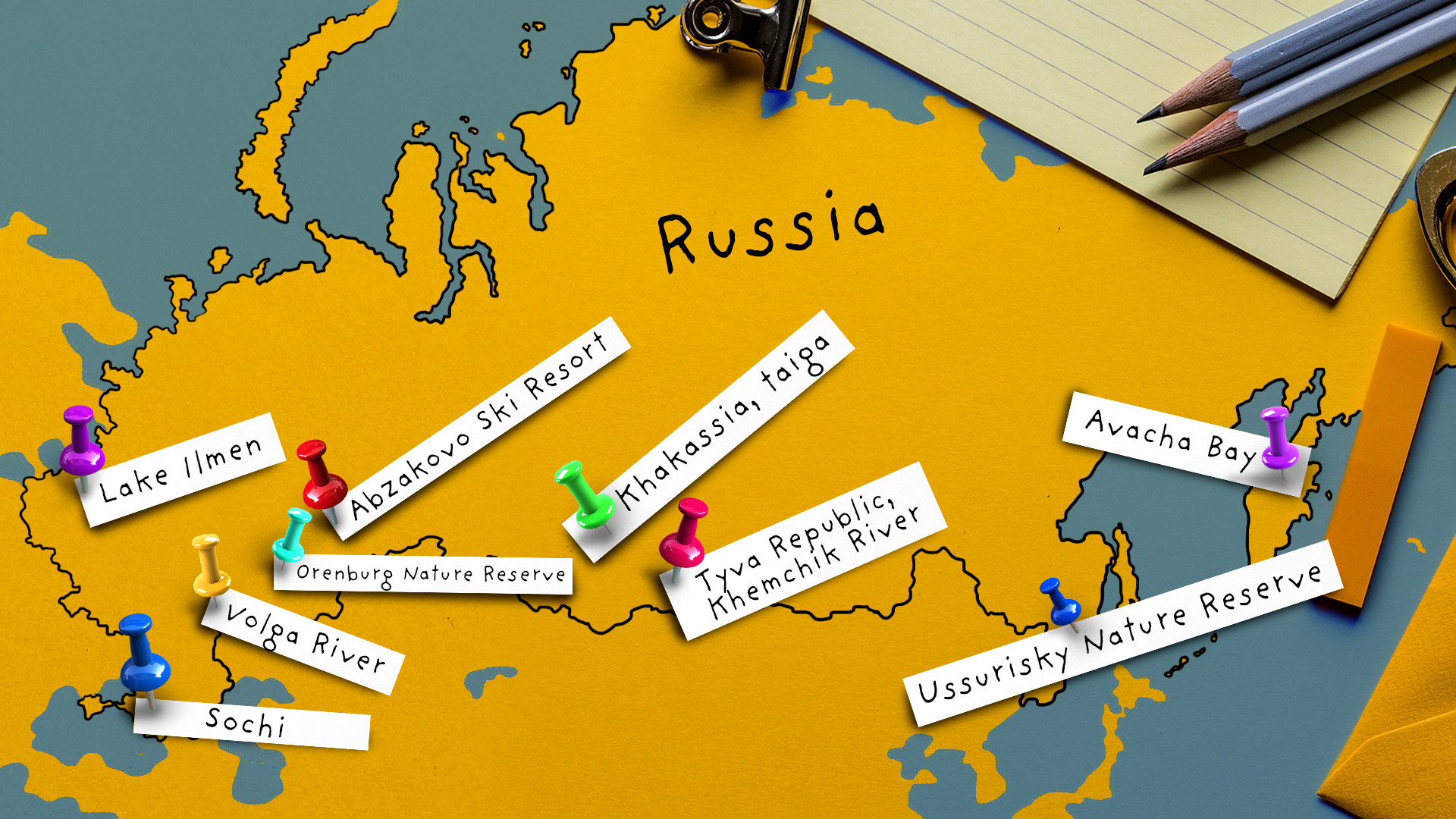 Remember this famous photo of a bare-chested Putin astride a horse? 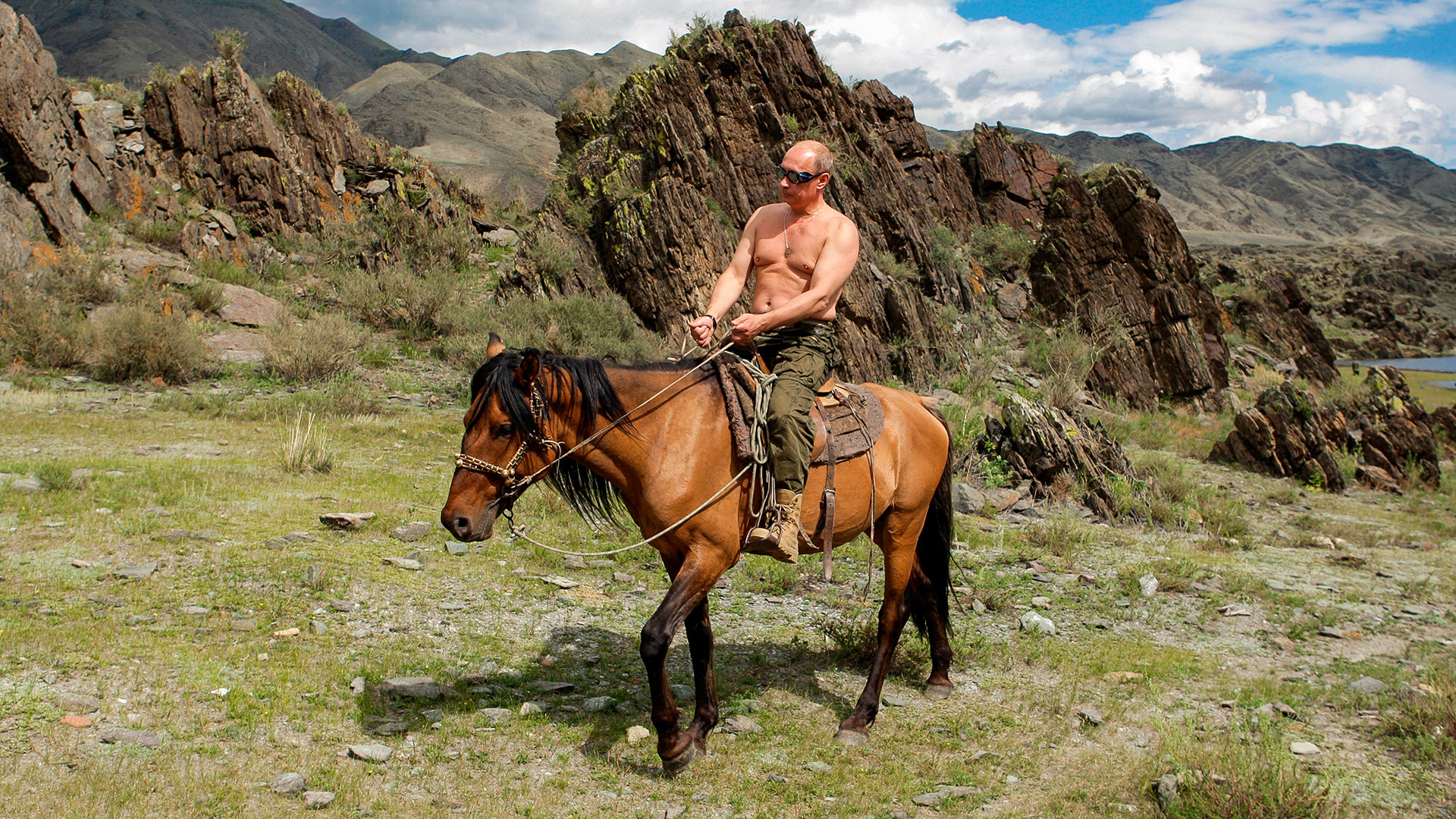 To be seen in a “half-naked pose is rather unusual for a head of state” said Austrian journalist Armin Wolf in a later interview with Putin. To which Putin replied: “You said ‘half-naked’ — thank God not ‘naked.’ If I’m on holiday, I don’t consider it necessary to hide behind a bush. I see nothing wrong with that.”

The image was shot in August 2009 during a vacation in the Republic of Tuva (3,717 km east of Moscow, not far from the border with Mongolia), which is apparently the Russian president’s favorite vacation spot. By number of visits, the Tuvan taiga is the indisputed leader. One of his first known trips here was in 2007 in the company of Prince Albert II of Monaco. The two men sailed nearly 50 km along the rapids of the Yenisei River, and fished.

In 2009, the traditional river-rafting was combined with the above-mentioned horse ride. Incidentally, the animal belonged to a local shepherd who lived near the presidential camp. In 2013, it was again Tuva and again fishing. This time, Putin caught a pike weighing 21 kg — a new personal record. 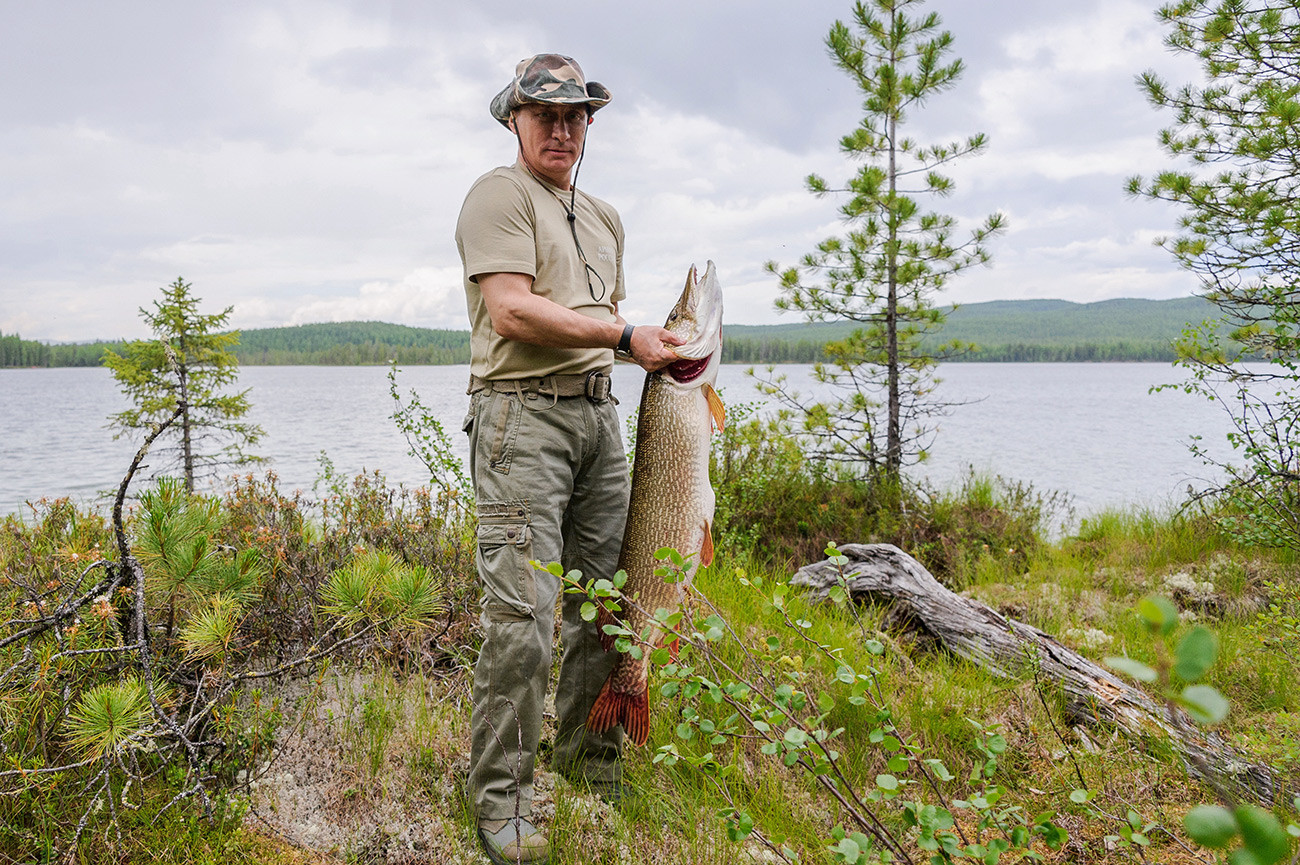 But the president’s most famous fishing trip happened in August 2017. During an underwater hunt for pike, Putin had a GoPro camera strapped to his head, and the first-person footage was broadcast on national TV. According to the Kremlin, the president fished for several hours that day. 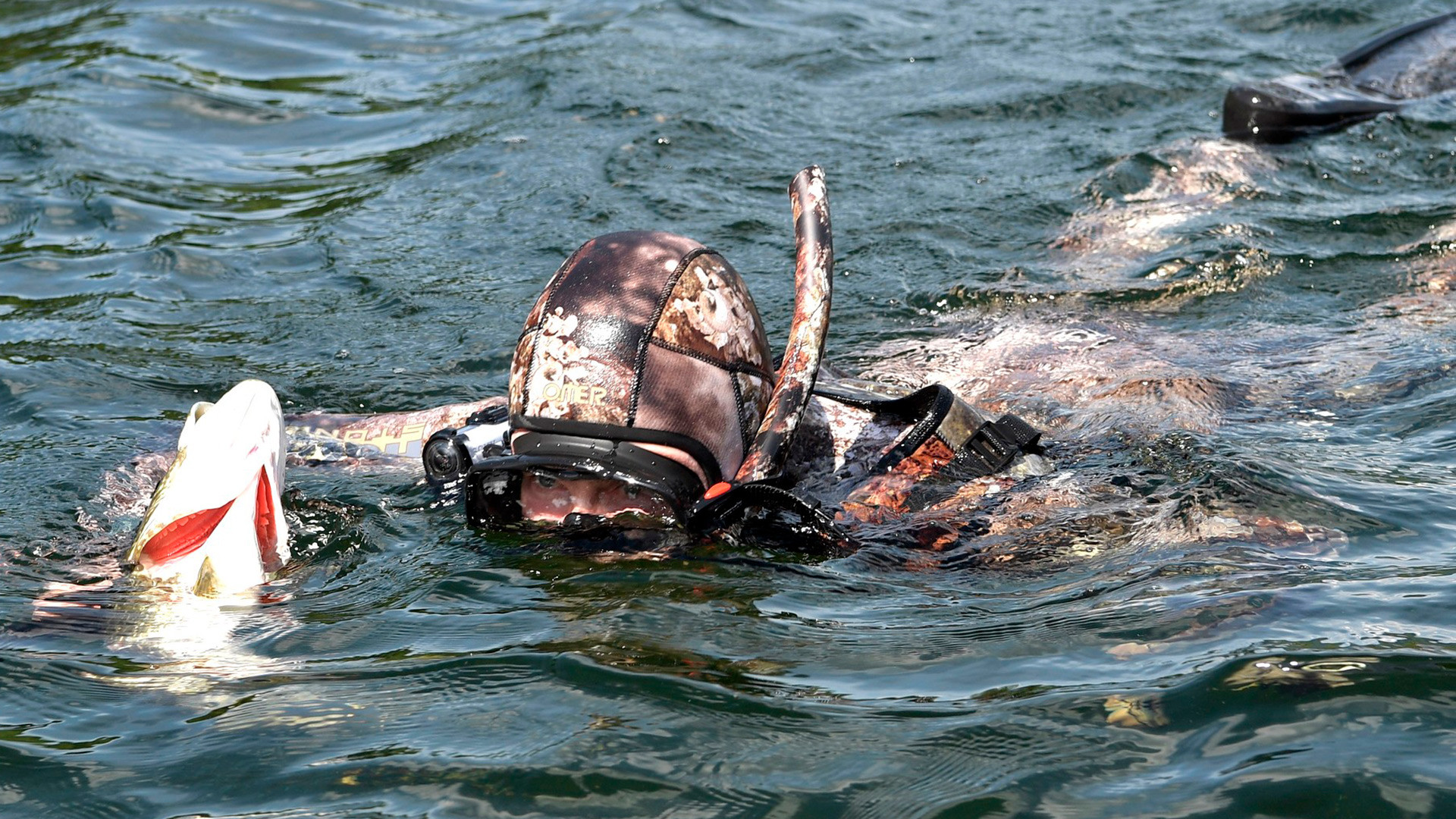 All these trips were, most likely, not to the exact same spot — after all the Siberian taiga is huge. But at least one location is known: “The Khemchik River is the largest left tributary of the Upper Yenisei, or, as the locals call it, Ulug-Khem. I guarantee an unforgettable vacation, not only on the banks of the Khemchik, but across Tuva as a whole,” Putin himself said. It is here that the well-fed pike was caught. 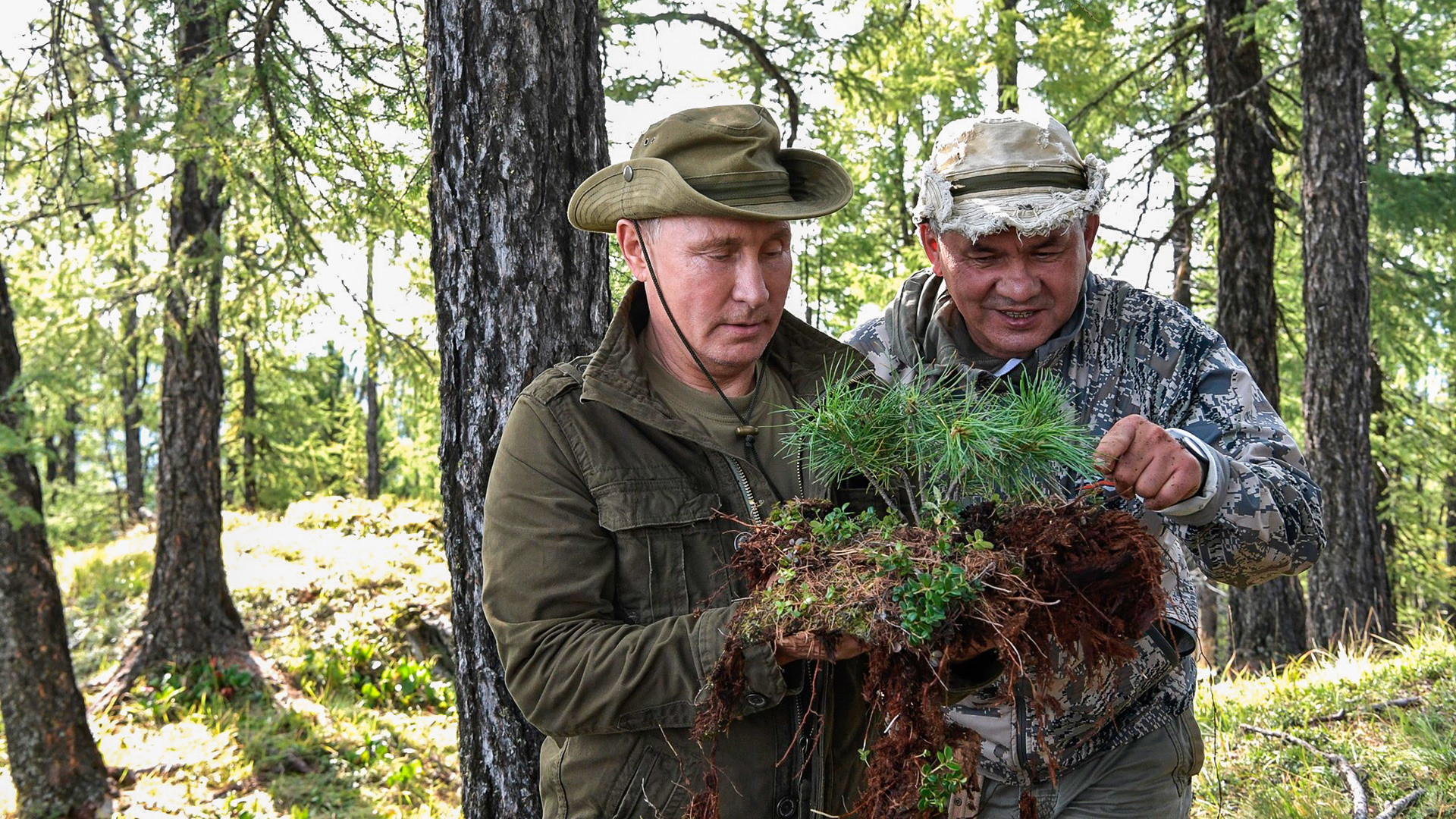 In 2018, Putin went to Tuva once again, but with a more relaxing agenda: walking, picking mushrooms, and roasting shashlik in the company of Defense Minister Sergei Shoigu and FSB Director Alexander Bortnikov. And he returned in the fall of 2019, this time only with Shoigu. 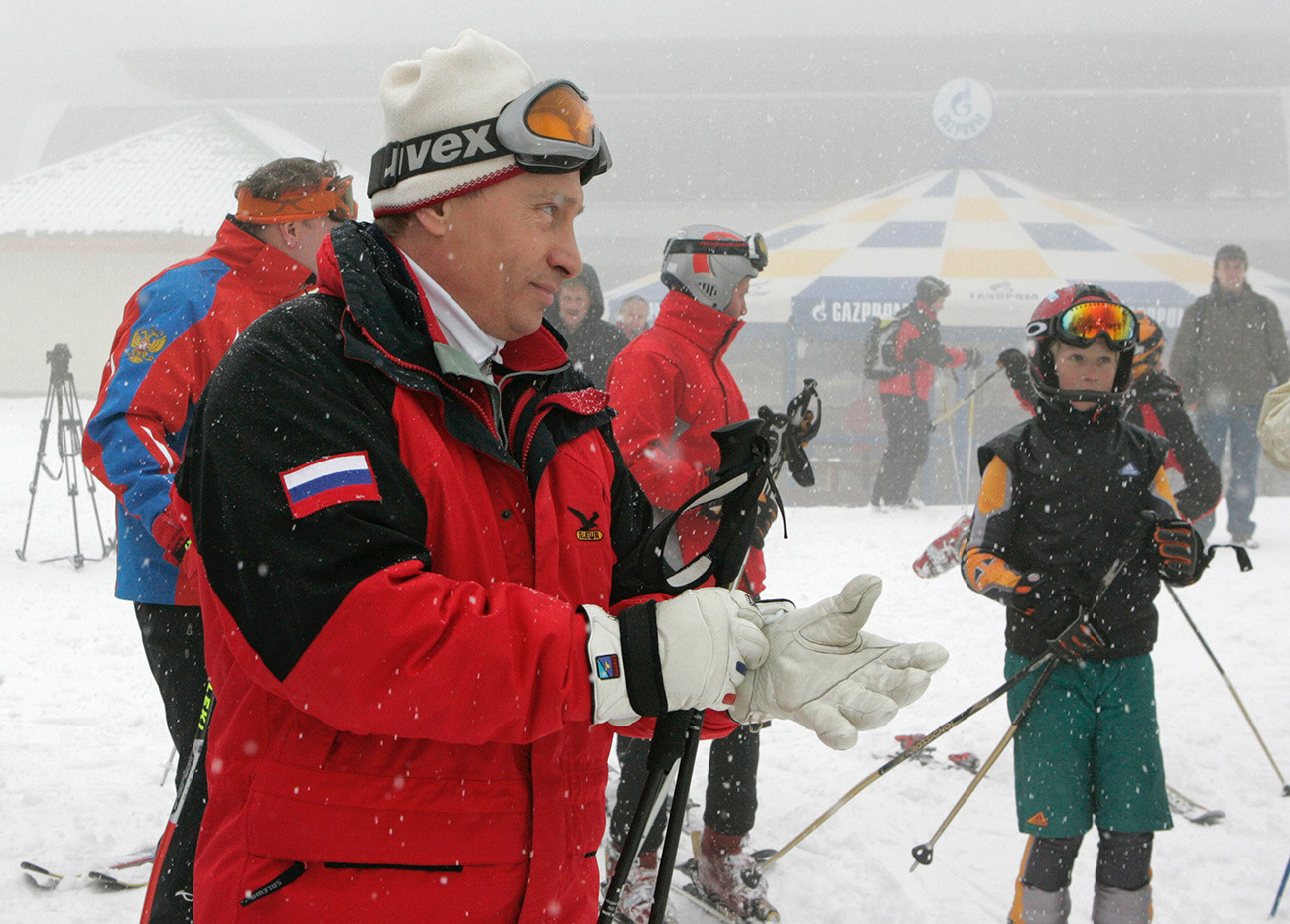 Putin’s favorite winter sport is skiing. “It’s a dynamic, technical kind of sport and a great way to relax and keep fit at the same time,” he said. His preferred location is Sochi. Even before the 2014 Winter Olympics, he went there many times in the 2000s, trying out new slopes and meeting pro skiers and resort managers. Krasnaya Polyana's growing popularity had a downside: since the resort’s infrastructure cannot be fully closed off to outsiders during a presidential trip, Putin has to freeride away from the ready-made runs on the Aibga Ridge. 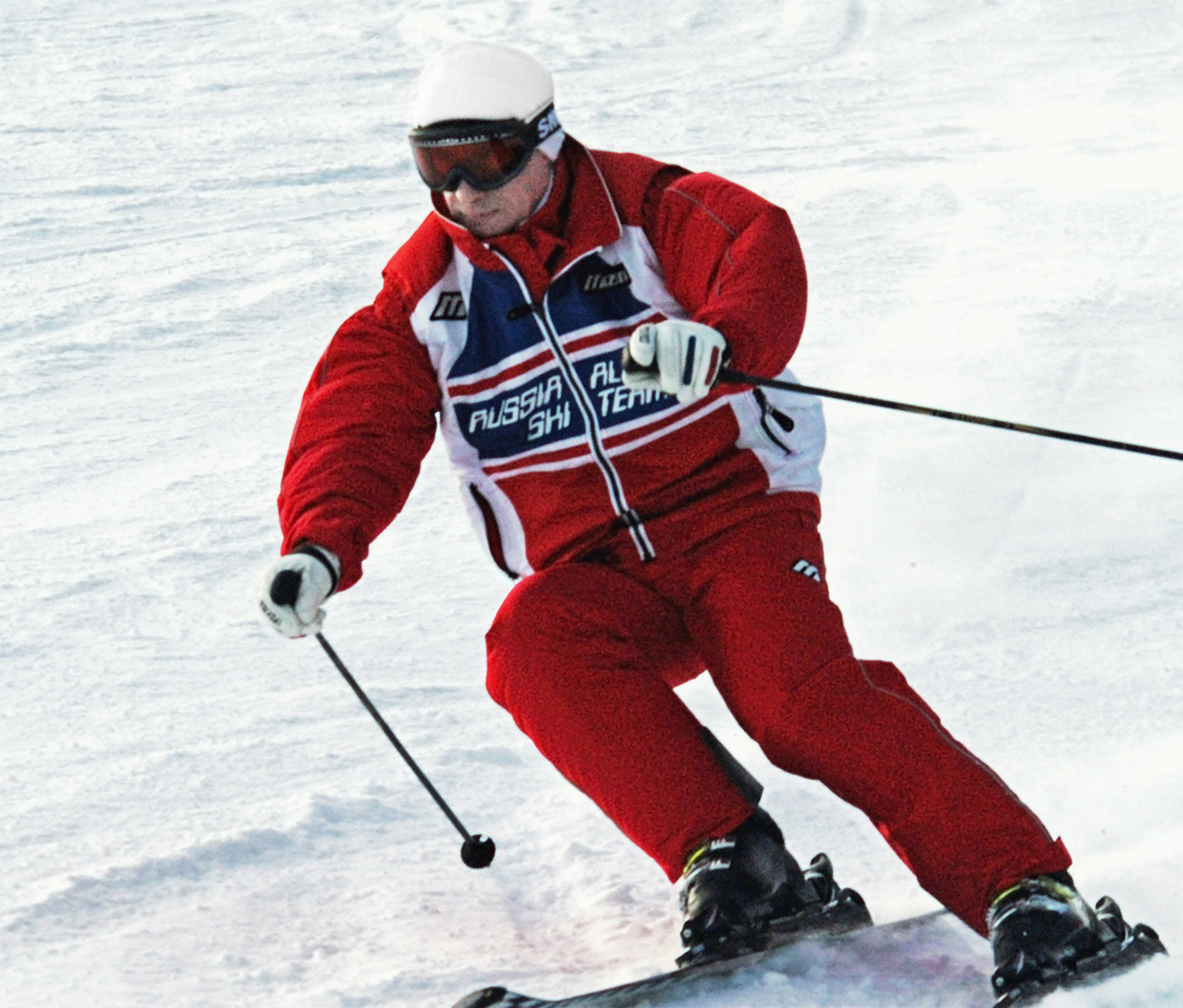 Another place for winter recreation is the mountain village of Abzakovo in Bashkiria. The resort is a winner of the “Best ski resort in the Urals” and “Most affordable ski resort in Russia” titles. It offers 15 slopes with a total length of 18 km. Putin first visited Abzakovo immediately after his first presidential election victory in 2000, returning every year thereafter that until 2003. 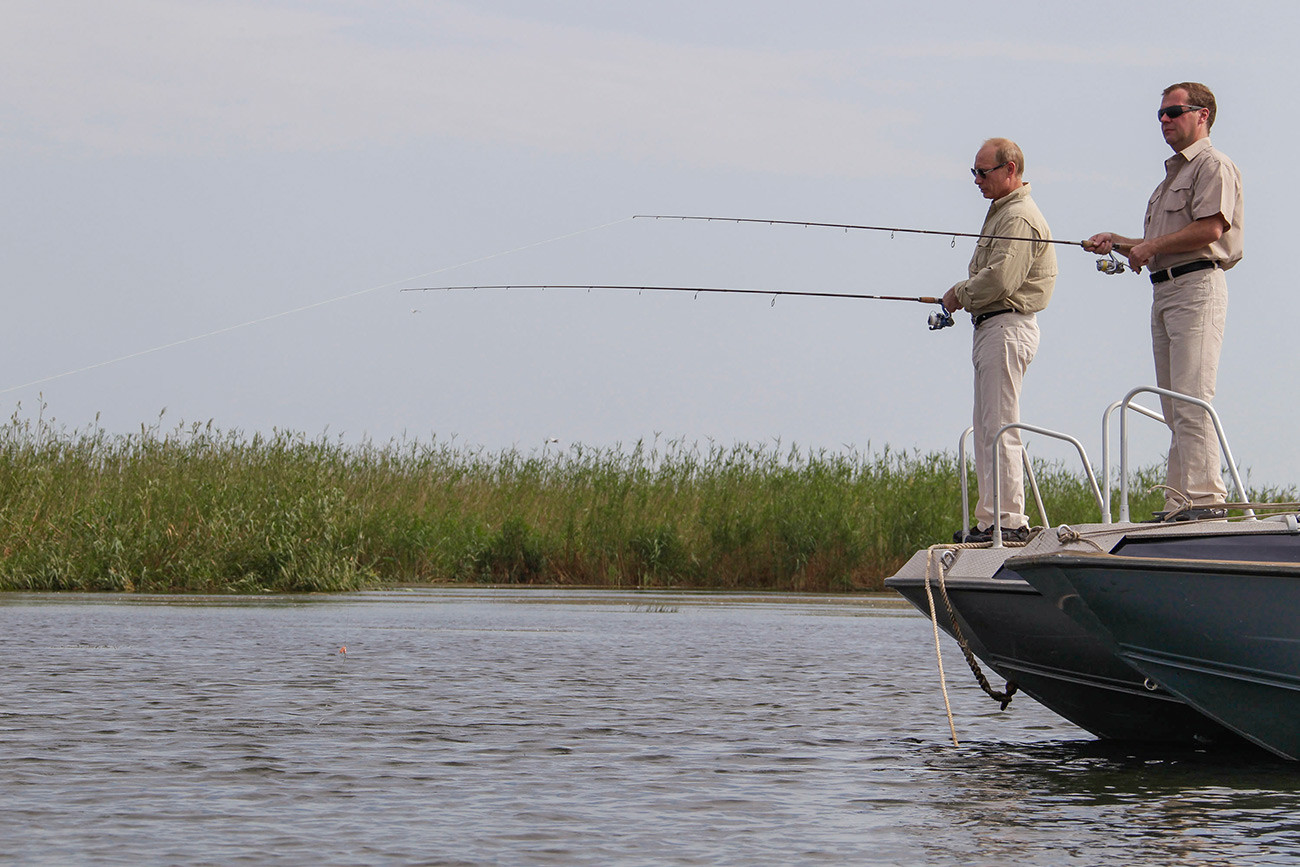 “Seriously, the best fishing in the world, in my opinion, is to be had in the Murmansk Region and the Volga Delta at Astrakhan,” Putin once said. He traveled to the latter in 2011, accompanied by Dmitry Medvedev (Medvedev was then president, Putin prime minister). After a stroll along the river bank, they went spin fishing, followed by an underwater hunt with camera-equipped wetsuits. Afterwards, they boated along the river — both Putin and Medvedev are licensed to operate this mode of transport themselves. 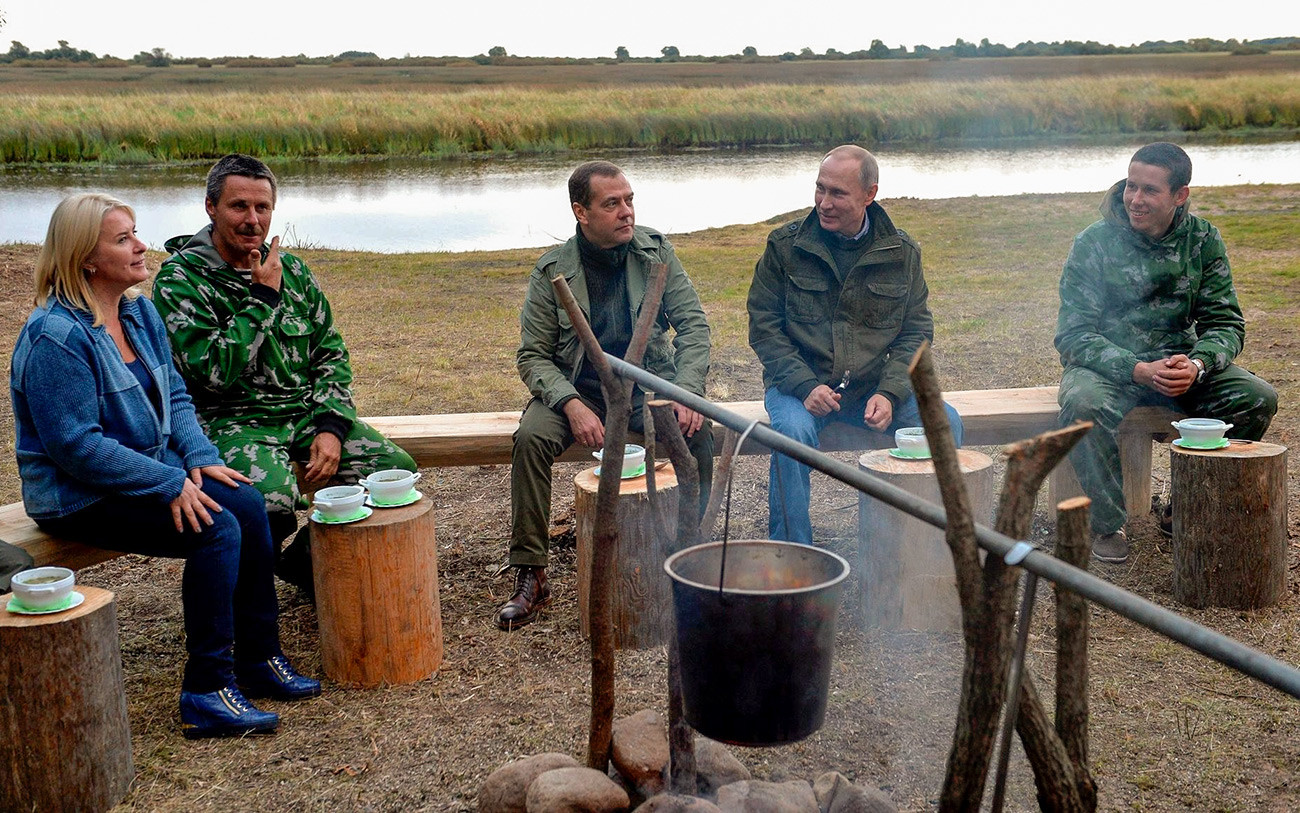 Another joint trip with Medvedev was in September 2016 to Lake Ilmen in Novgorod Region (473 km from Moscow). Putin surveyed the island, rode a boat, visited an old church, and ate ukha (fish soup) with local fishermen. Asking what the soup was made of, Putin was told: zander. “There isn’t a single piece of fish in my bowl,” Putin said, “but anyhow it’s delicious.” 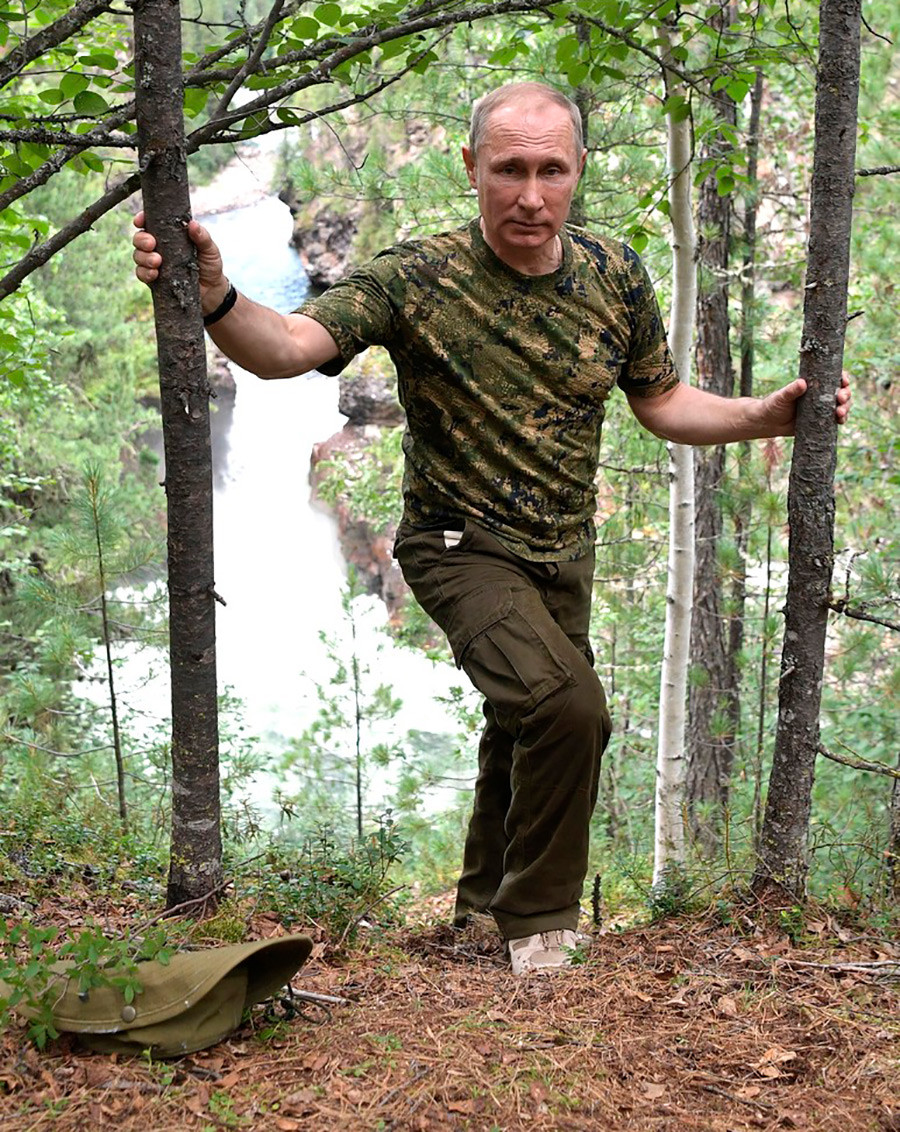 The president wound up in Khakassia in south central Russia in 2018 after a summit of CIS leaders in Dushanbe, Tajikistan. He went to the taiga for just one day. Whether it was a solo trip or not, the Kremlin did not comment. Afterwards, he flew straight to Sochi for the F1 Grand Prix.

Putin likes to combine outdoor recreation with encounters with wild animals. In August 2008, he flew to the nature reserve of the Far Eastern branch of the Russian Academy of Sciences, where zoologists study and protect Ussuri tigers. He saw how a five-year-old tigress had been trapped by poachers, and personally placed a collar with satellite tracker around her neck. 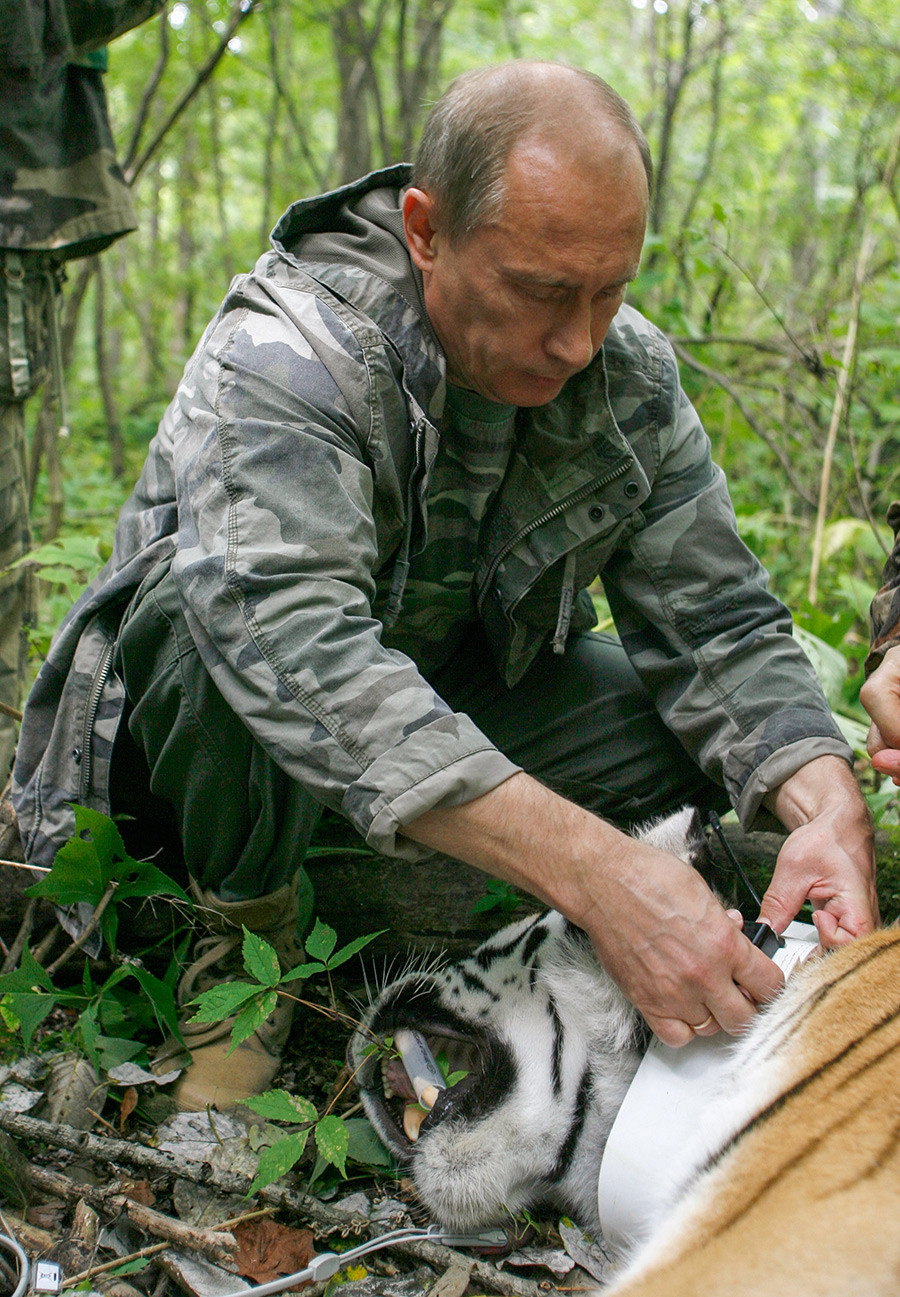 In August 2010, Putin flew to Kamchatka with scientists from the Kronotsky Reserve. He sailed out to sea, where he took a sample of gray whale tissue for analysis (for which he had to shoot the whale with a crossbow, managing it at the fourth attempt). 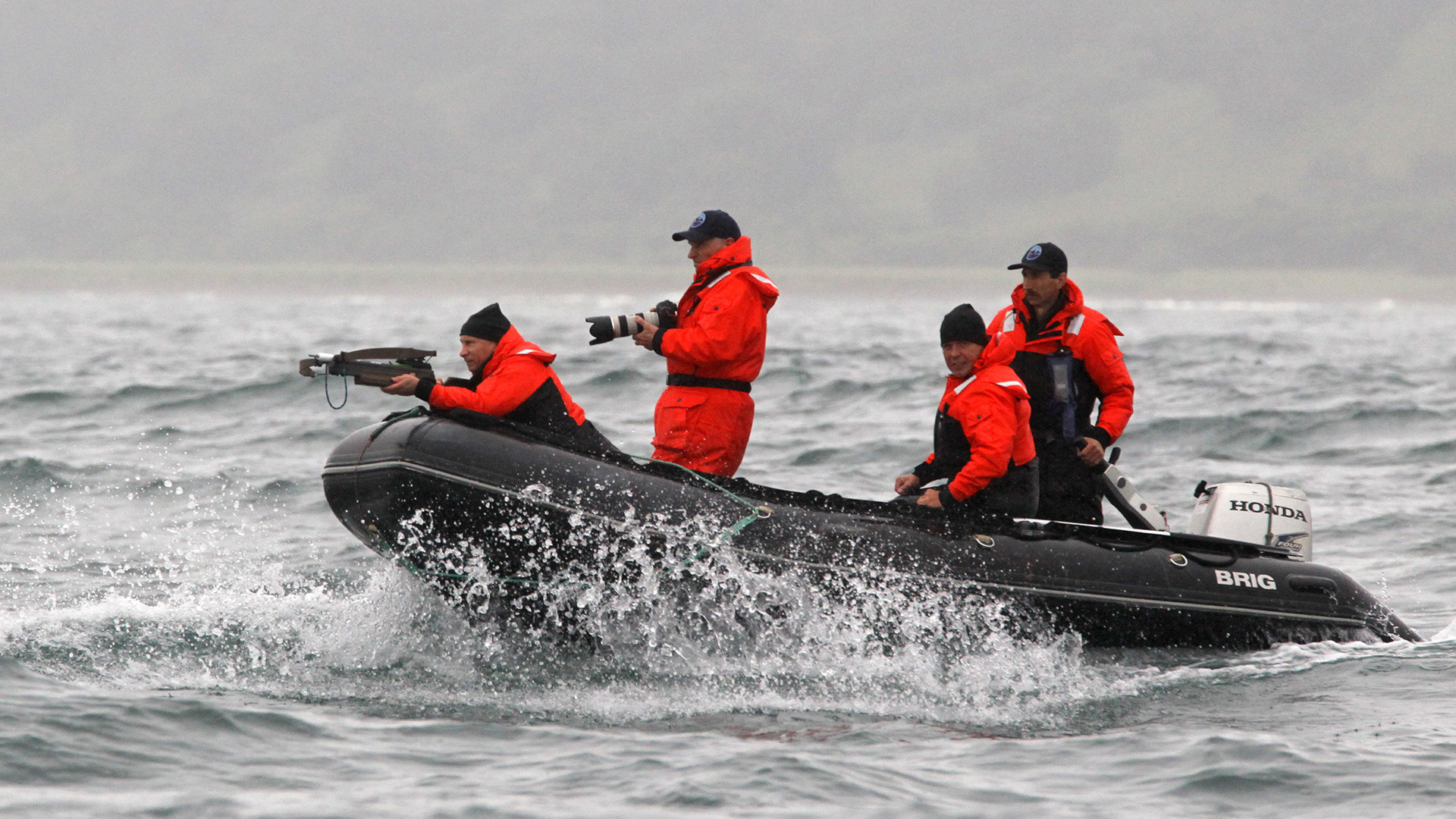 And October 2016 found him at the Orenburg Reserve, where the Przewalski (Mongolian wild horse) population had been restored. The highlight of the trip was the president riding a quad bike with a herd of horses running after him. “They are very graceful, powerful animals. Splendid. The difference is in the chromosomes. Domestic horses have 64 chromosomes, while these have 66. They are different animals,” he told reporters. “It’s not just another breed of horse, but something that almost disappeared from the planet.” 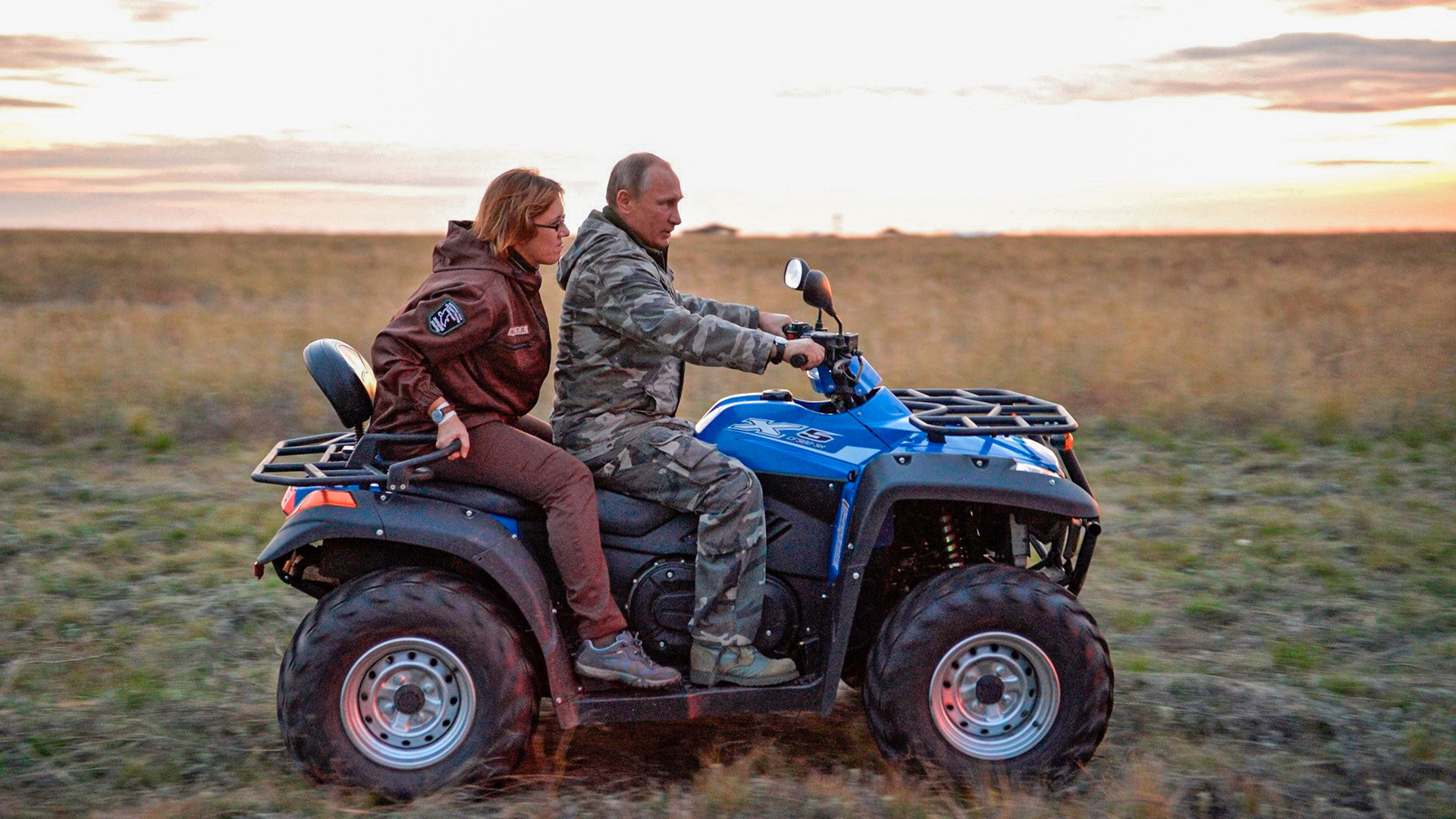